One of the perks of having a child who works at a vegetable farm is that she brings home produce. Towards the end of the work day, my daughter will often call to see what I want and I’ll say, “Carrots, please, and two green peppers.” Or, “A couple of the red juice tomatoes, beets, and some red onions.” Or, “Nothing today, thanks.”

And then there are the days she calls and says, “When you pick me up, bring the van.” Because the haul — all the unused produce that she’s allowed to just take — is so great that it won’t fit in the car.

It’s incredible really. The bins and crates spread across the picnic table, we marvel at our good fortune. And then I take what we’ll use and we share the rest with friends.

The day she brought home a bushel of eggplant, though, I wasn’t sure whether to gloat or cry. 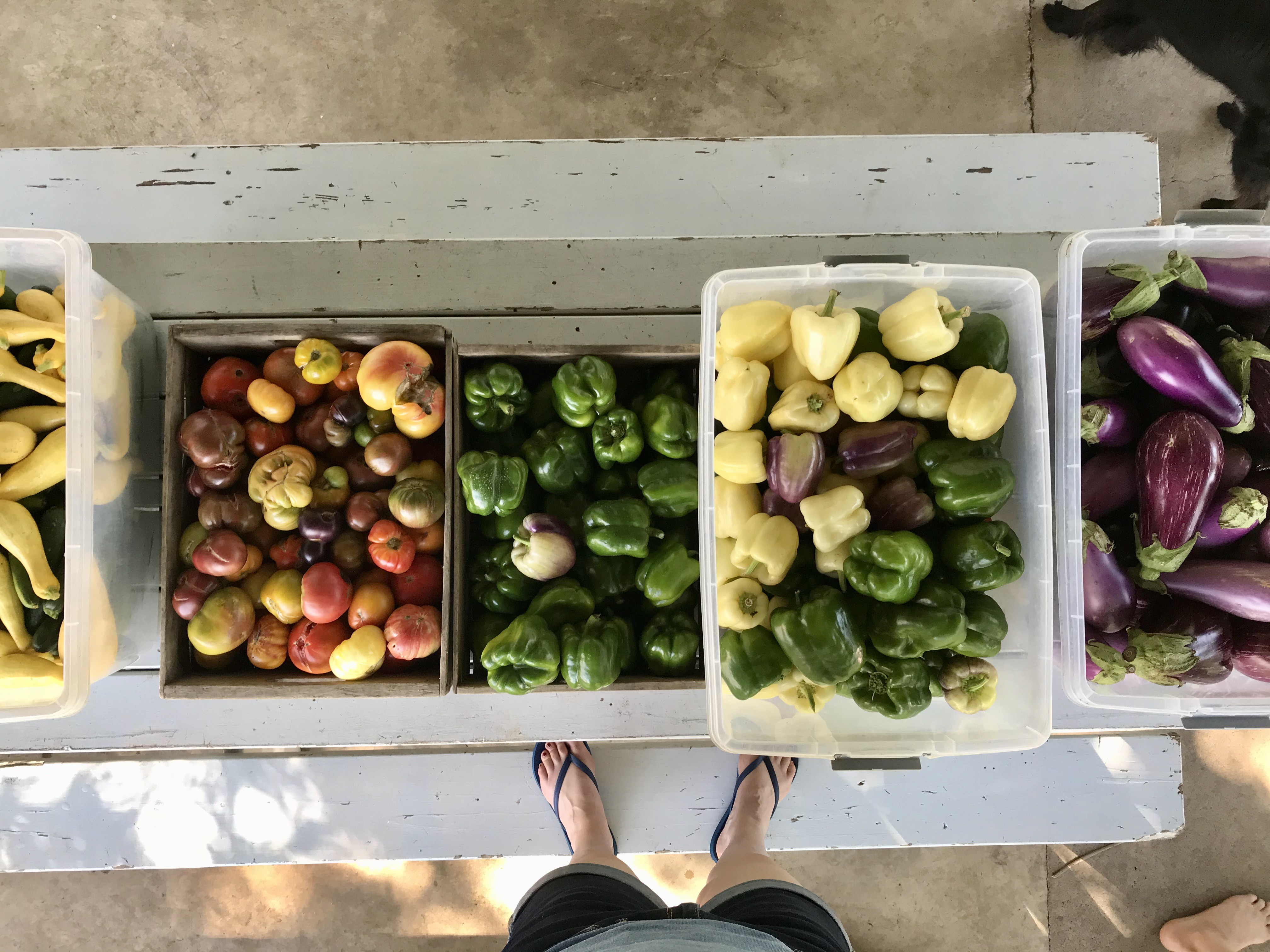 I hadn’t grown up eating eggplant (my only eggplant-oriented memory is of my mother “secretly” dumping her plate of eggplant parmesan under the picnic table), and besides a one-time foray into baba ganoush (which we liked), I really didn’t know how to use it. Or rather, how to use it in ways that my family would find acceptable.

So I posted on Facebook: “Best recipes for eggplant. GO.” 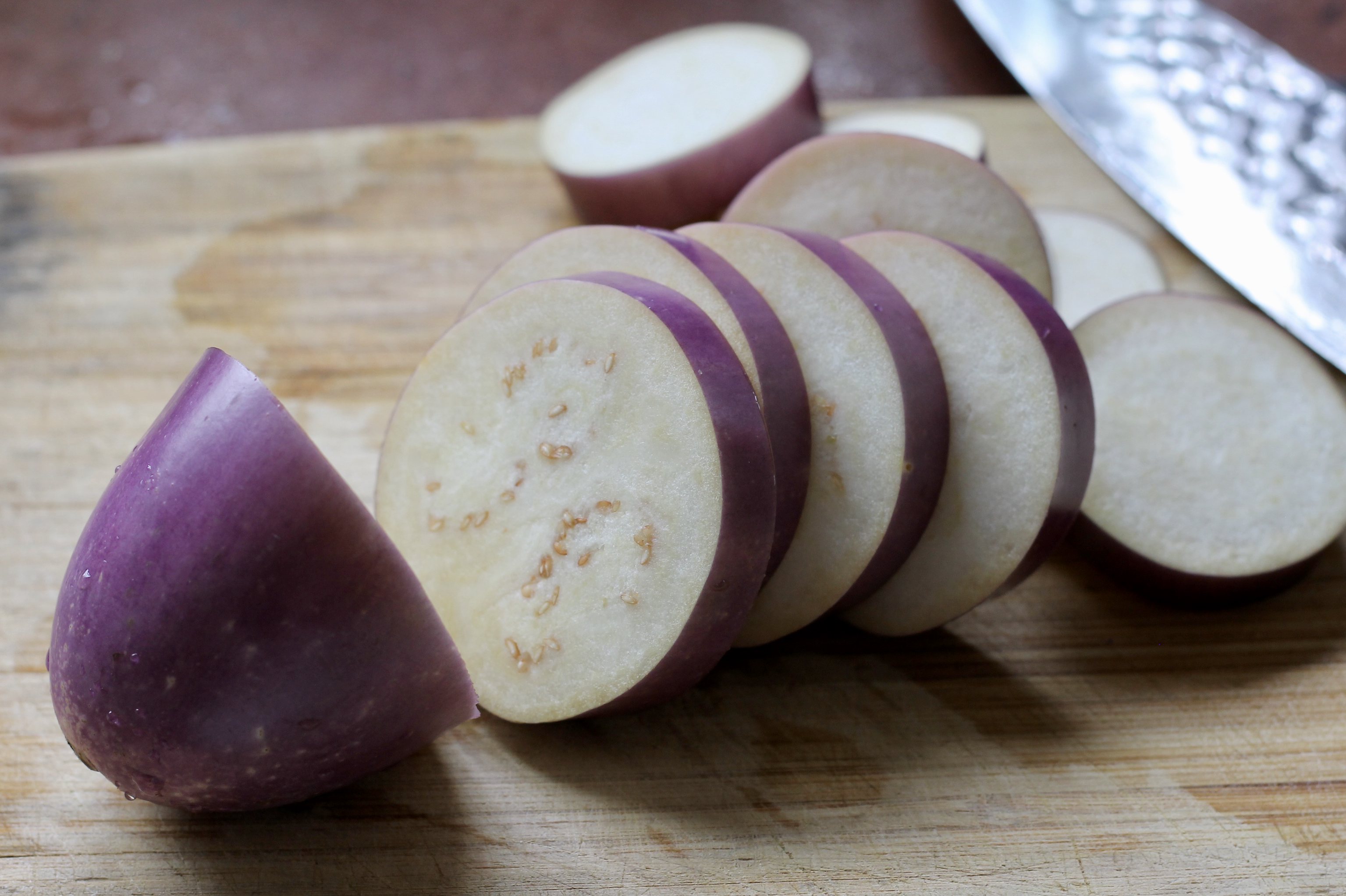 Since then, I’ve cooked eggplant a bunch of different ways:

Grilled: I dipped each slice of eggplant in a sauce of olive oil, chopped parsley and oregano, salt and pepper, and raw garlic and then grilled them until golden brown. I also applied the same treatment to thick slices of sweet pepper and red onion. 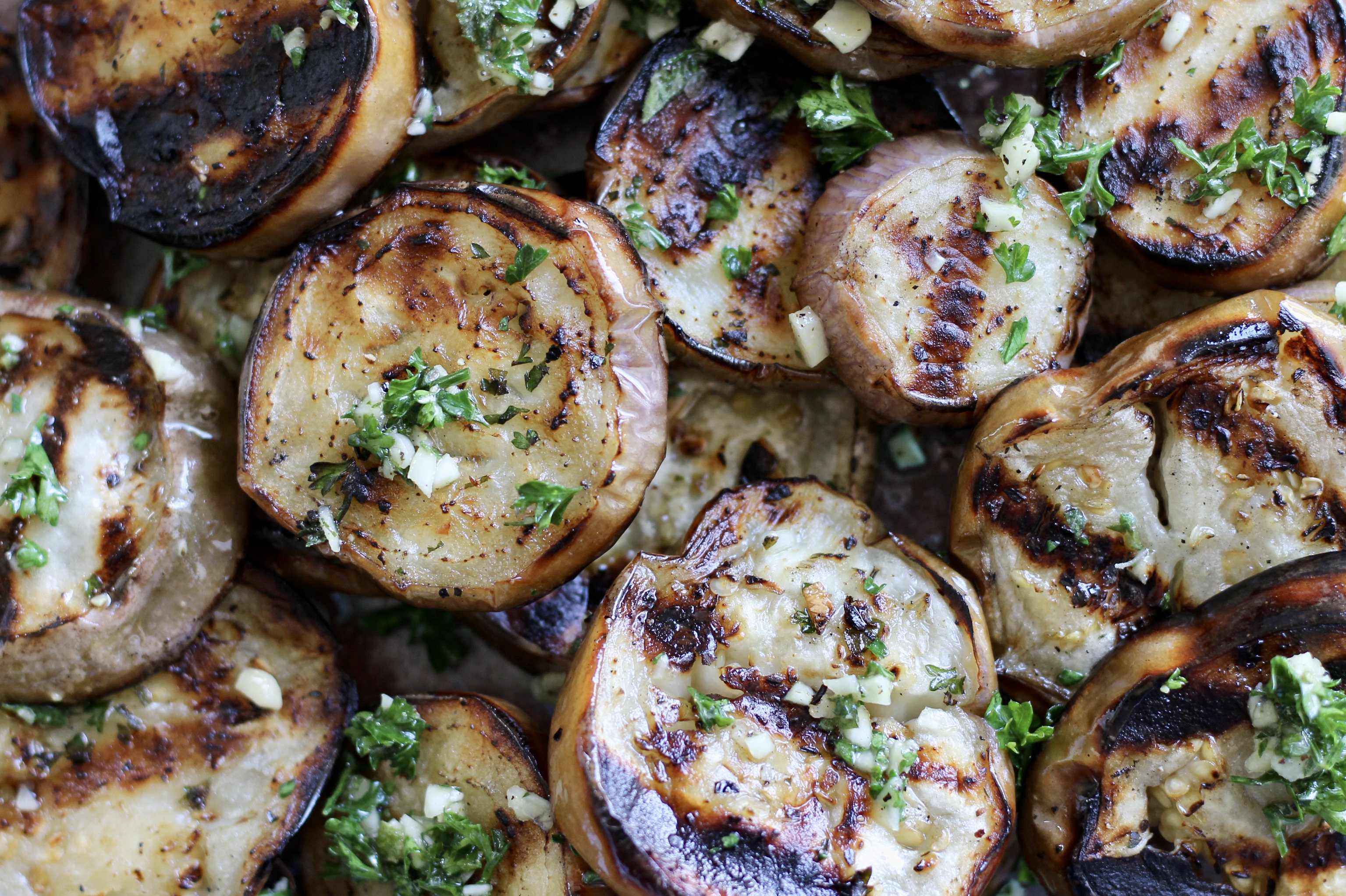 To eat, I made a veggie stack: a round of eggplant, feta, eggplant, mozzarella, onion, pepper, tomato, salt and pepper. Then I grilled a hamburger bun, slathered both top and bottom with mayo, and added the stack of grilled, cheesy veggies. 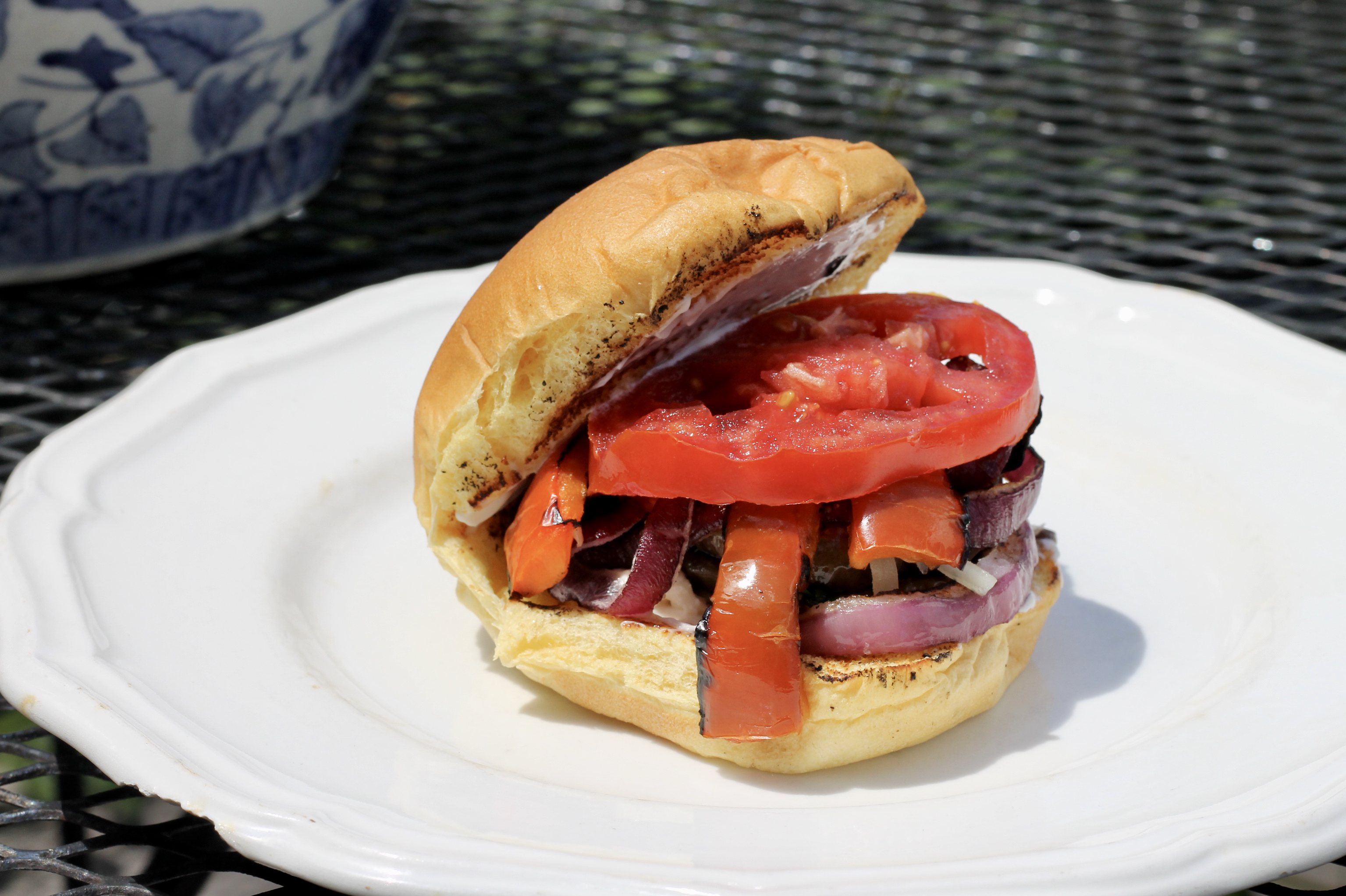 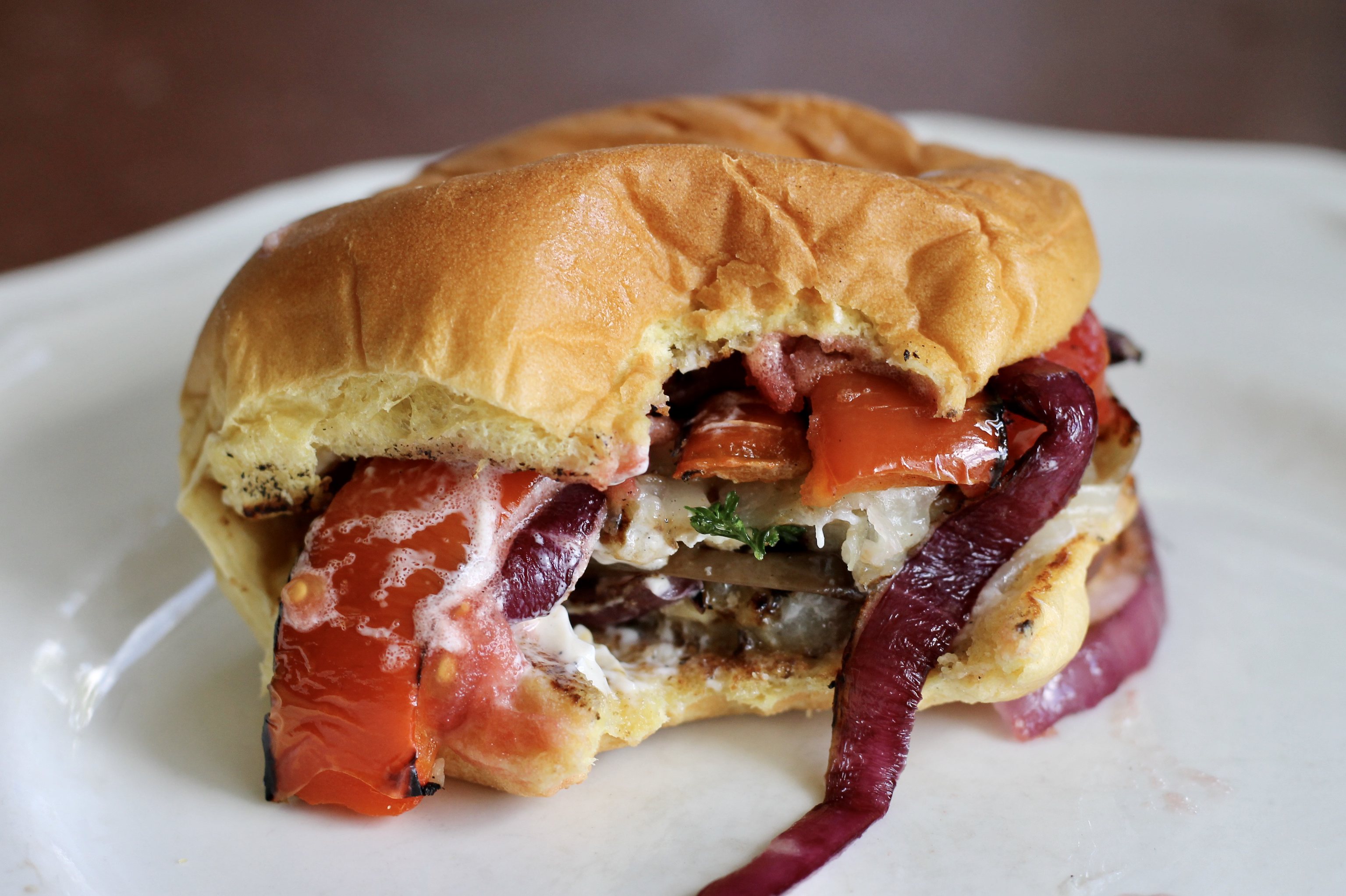 (The rest of the family ate their slices of grilled eggplant plain and stuck beef burgers in the buns.)

Moussaka: The Greek equivalent of lasagna, moussaka is made by layering a) roasted (or grilled) eggplant, b) a meat sauce seasoned with oregano, cinnamon, nutmeg, and paprika, c) sliced potatoes, and then d) topping the whole thing with a creamy mixture of feta, ricotta, and yogurt. 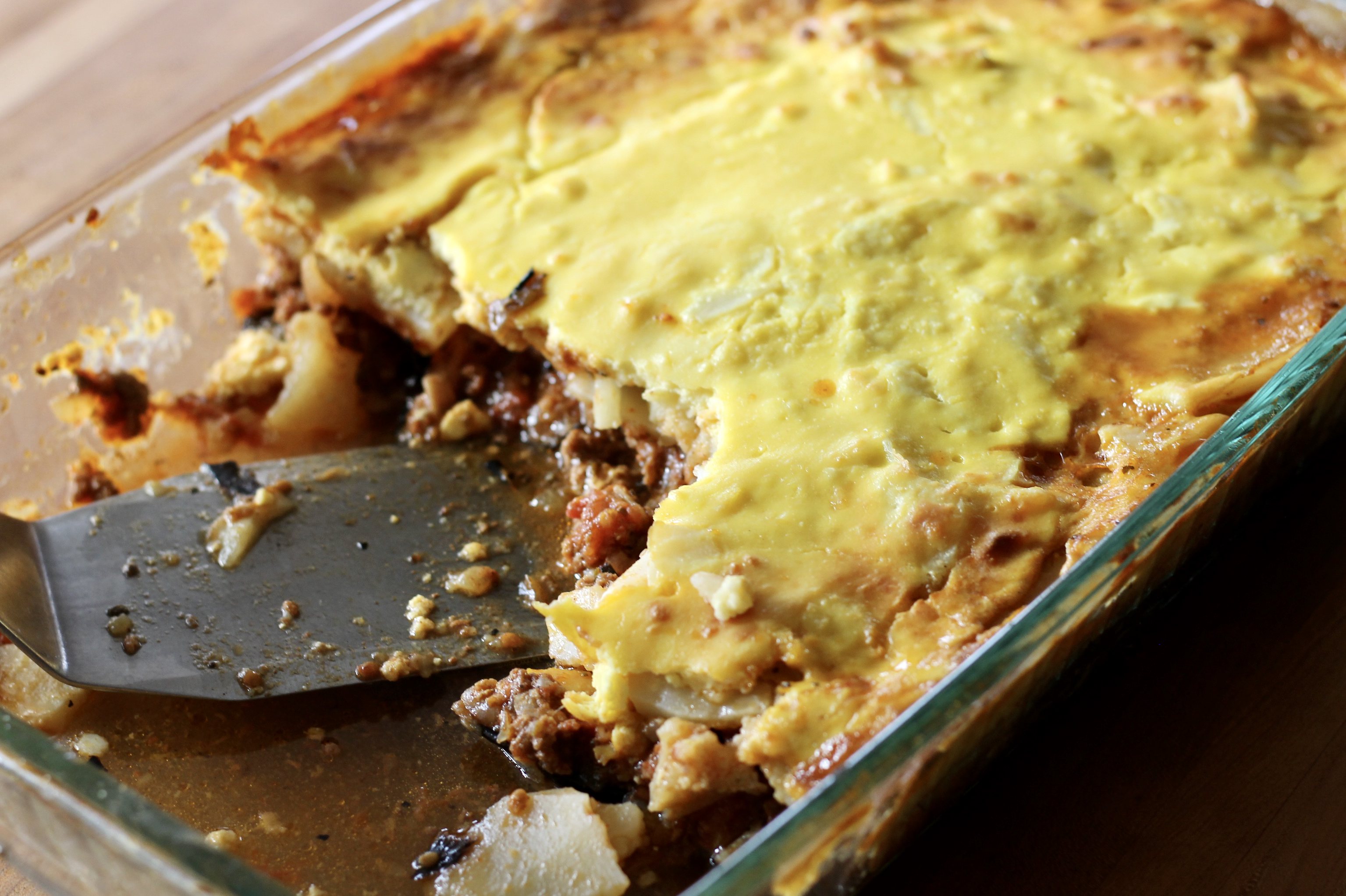 While my family liked the flavor, they reacted to the big slices of eggplant in the bottom layer so next time I’ll grill the eggplant, chop it into small pieces, and add it directly to the meat sauce.

Barbecued lentils and eggplant: I served this on buns like sloppy Joe’s — aka Sloppy Judy’s — but we all agreed we’d prefer it over rice. (Later I ate some of the leftovers spooned over a cheesy burger patty atop buttered sourdough toast, swoooooon.)

My favorite, though, was the black pepper tofu and eggplant, tofu being another food that I’ve hardly ever eaten and thought I mostly didn’t like. 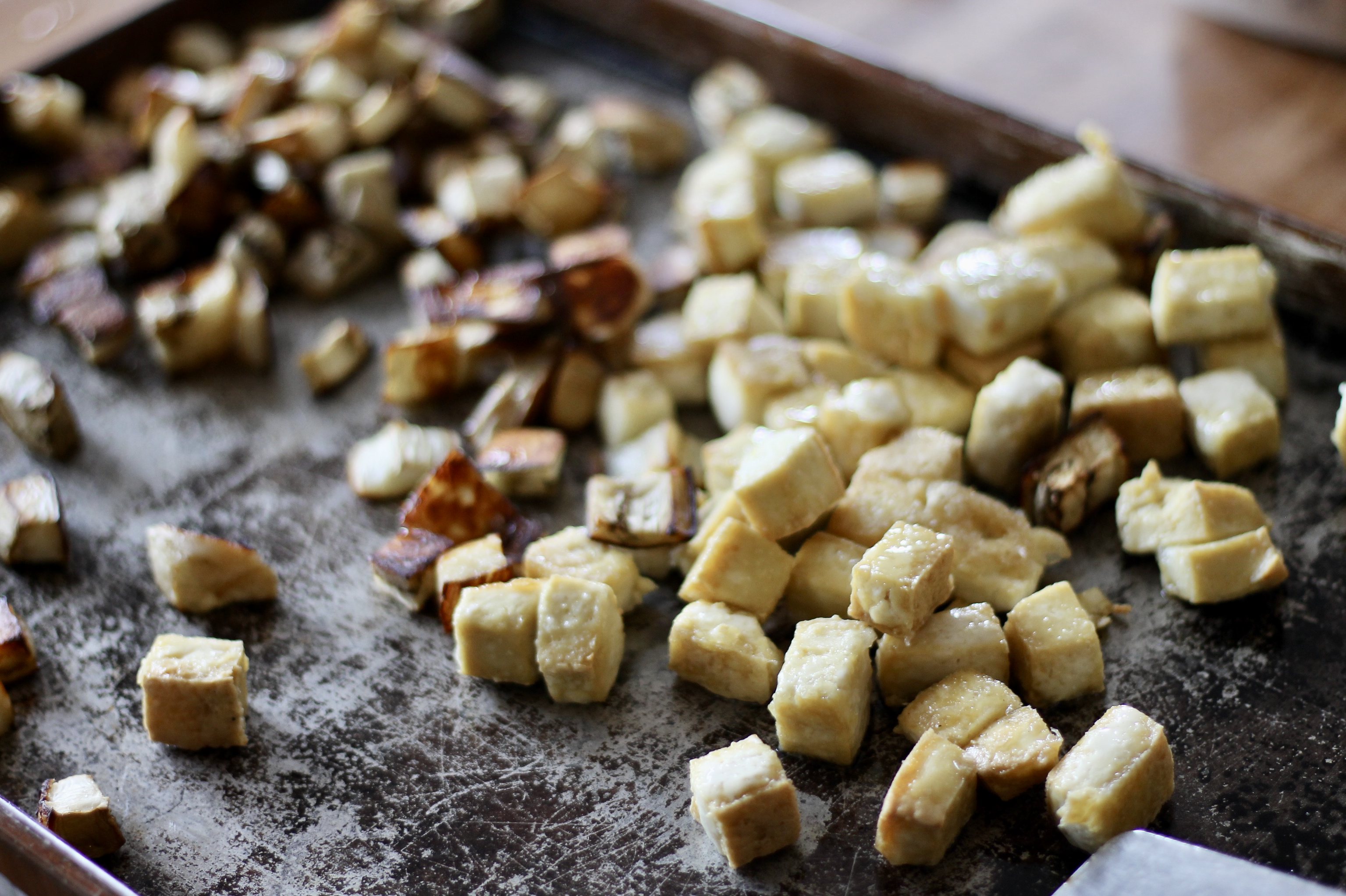 Which is kind of funny, really: that the combination of the two most un-like-ly foods combined to create something utterly delectable is why cooking never ceases to intrigue and amaze me. Hit it just right and it’s pure magic. 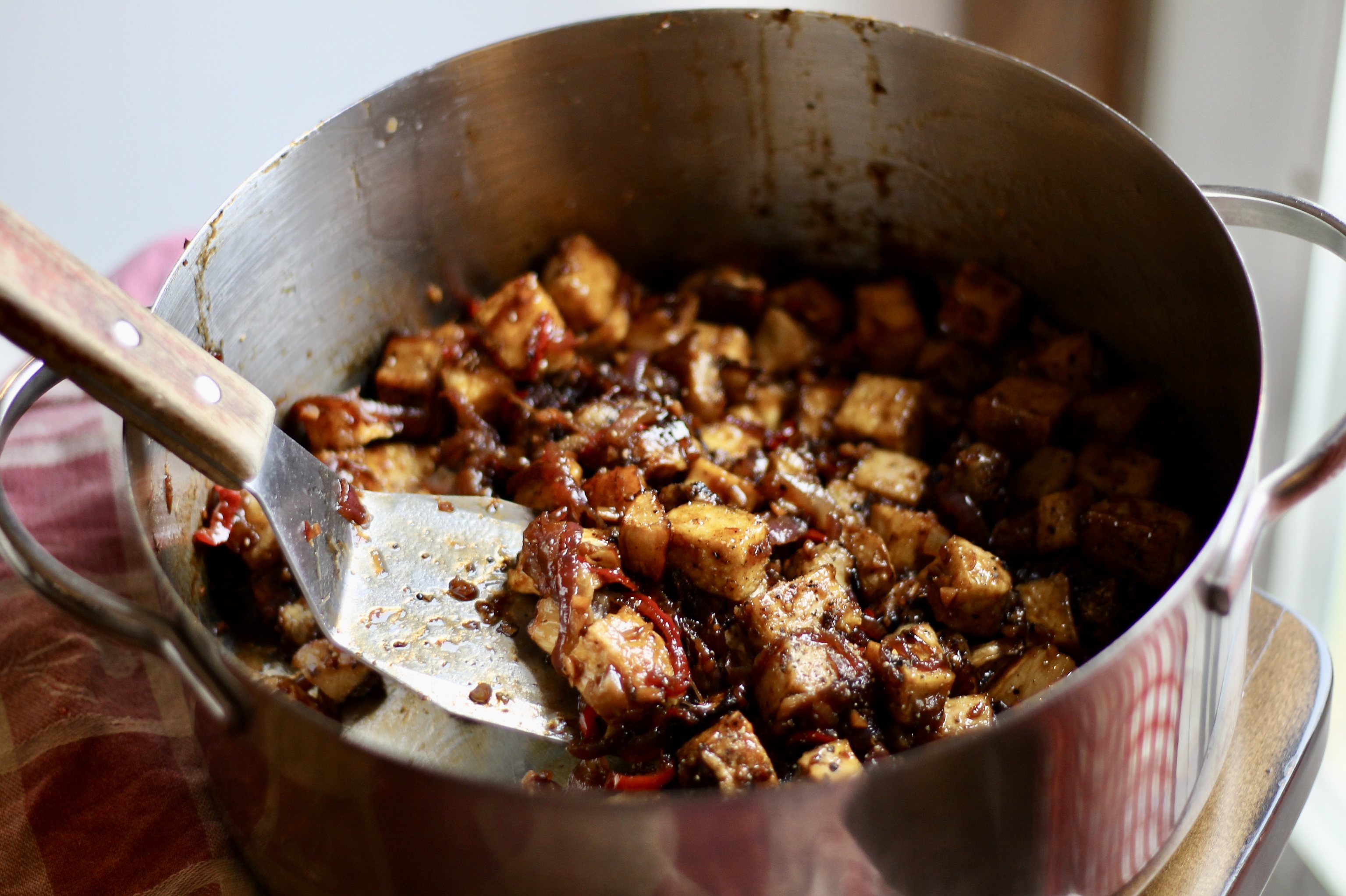 This afternoon I’m getting more tofu so I can make it again. My family wasn’t keen on this dish (inexplicably, they’ve never really taken to Asian flavors), but I don’t even care. 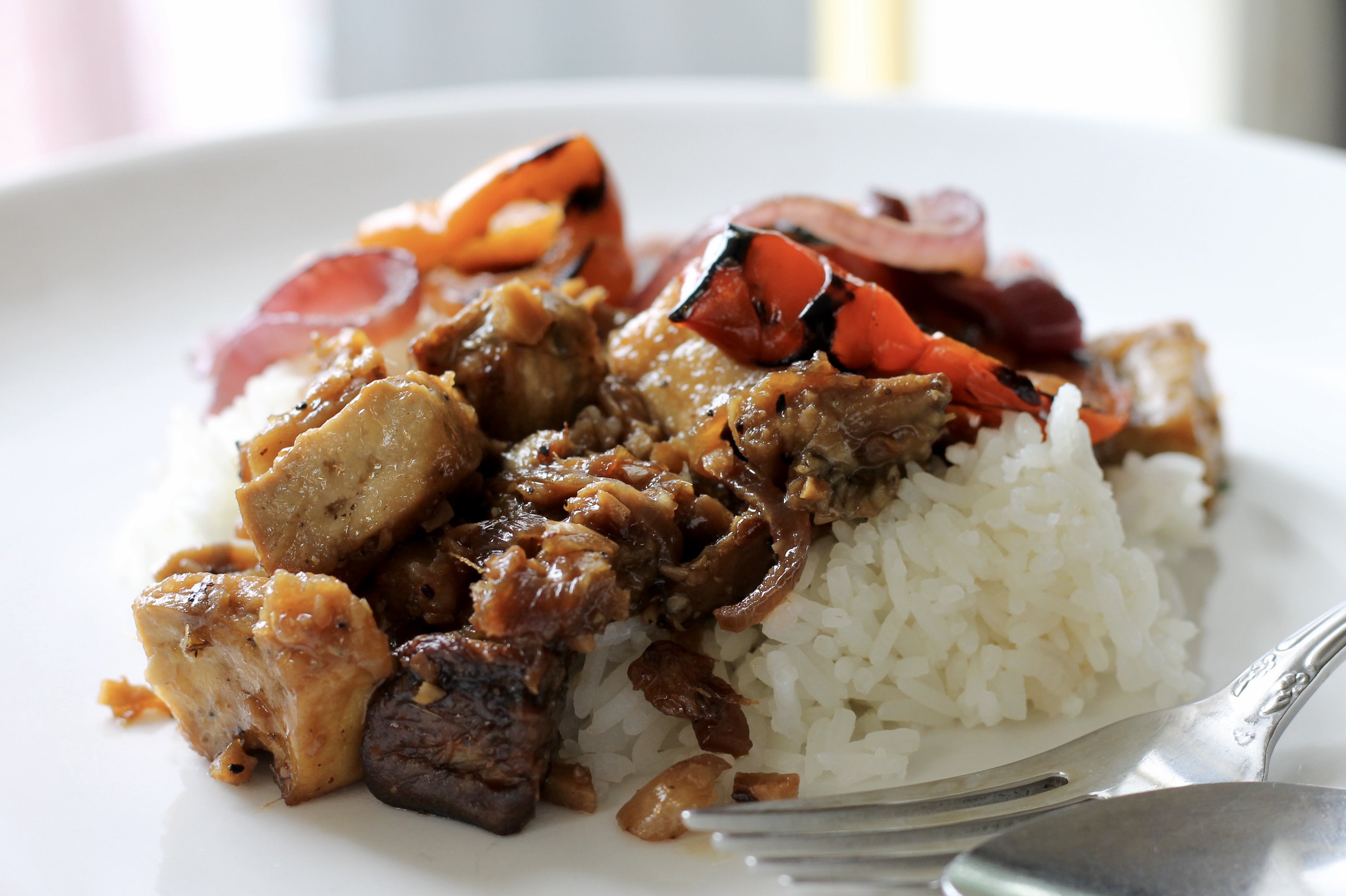 I’ll be more than happy to eat this for days on end. 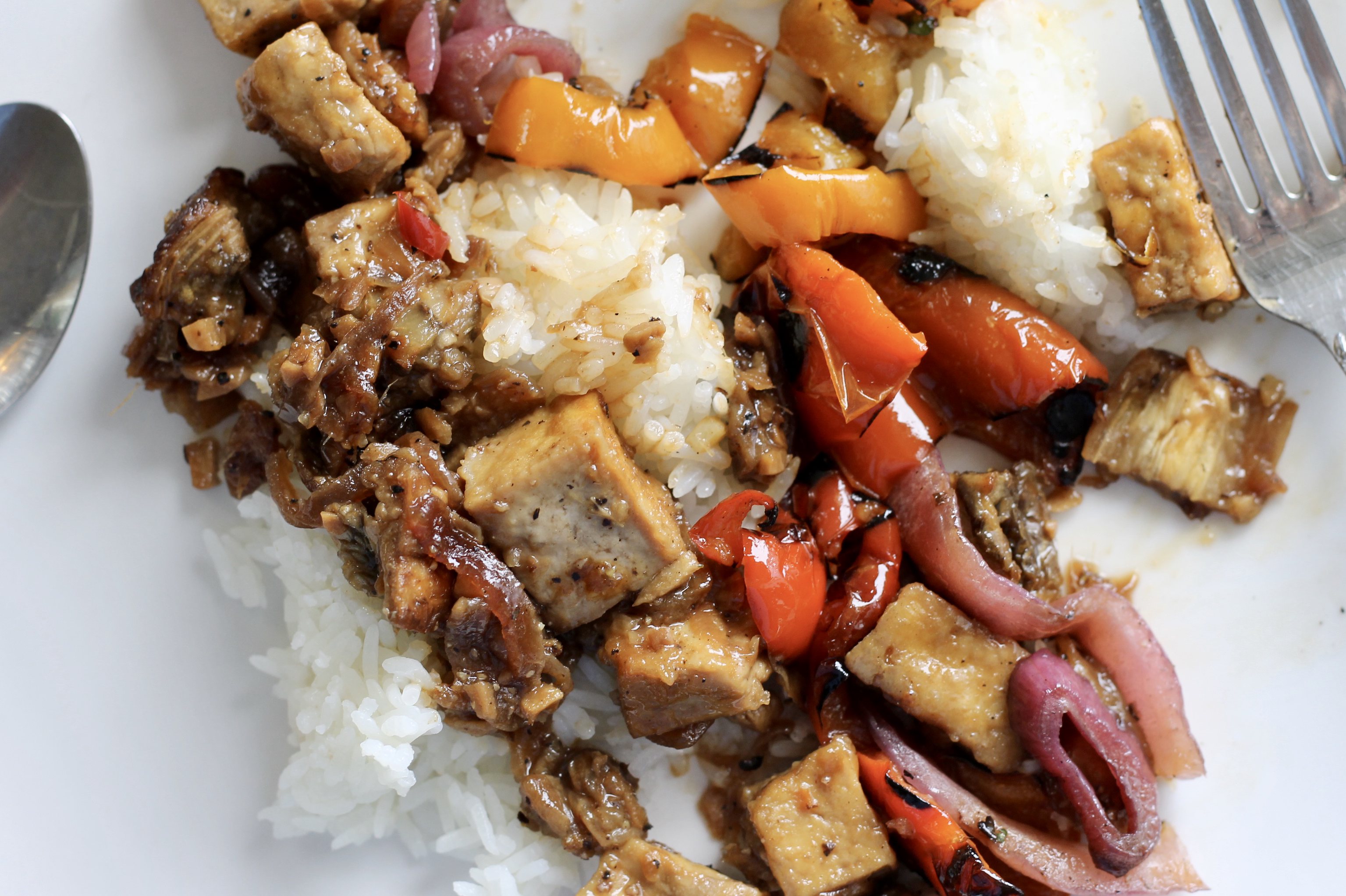 I got my tofu from our local co-op: the Wildwood brand.

Minced green onions would be a lovely and delicious garnish. Also, consider serving this with grilled onions and sweet peppers (ones that were dipped into herby, garlicky olive oil prior to grilling), as seen above.

A full half cup of soy sauce was too salty for my taste; thus the reason for subbing in with a bit of water.

This is one of those dishes that, while you can eat it immediately (and you will because it’s impossible to wait!), actually improves with time. After a day or two in the fridge, the flavors meld and intensify. Consider your menu planning accordingly.

I think I’m going to try oven roasting some extra eggplant and then freezing it so I can make this dish in the winter. Eggplant Experts: do you think it will work to roast, and then freeze, eggplant?

Set the tofu on a paper towel-lined plate. Put more paper towels on top. Let drain for 5-10 minutes, partway through replacing the wet paper towels with fresh and setting a second plate on top of the tofu since removing all the moisture helps the tofu fry better. Cut the tofu into cubes. Toss with the tablespoon of cornstarch and a bit of salt.

In a separate bowl, toss the chopped eggplant with a tablespoon of oil and a bit of salt.

Heat the oven to 400 degrees and put a large,sided baking sheet in the oven. Once the oven is hot, remove the pan and coat the bottom with 3 tablespoons of oil. Tumble the eggplant onto one half of the pan and the tofu onto the other half. Roast in the oven for 20 minutes. Turn the pieces (try to get color on at least two sides of each piece, but it doesn’t have to be perfect) and roast for another 5-10 minutes.

For the sauce:
In a large saucepan, melt the butter. Add the onions, garlic, ginger, and sweet pepper. Reduce the heat to medium low and cook for 10-15 minutes or until the vegetables are tender and beginning to caramelize. Add the soy sauce, brown sugar, and black pepper and simmer for several more minutes. Add the tofu and eggplant and cook for another couple minutes. Add more black pepper.