Raise of hands: How many of you made broth with your Thanksgiving turkey carcasses?

When the dust settled after our marathon of feasting, there were two turkey carcasses hiding out in the basement fridge.

Sunday morning, I stuffed them — bones, giblets, fat and all — into my biggest stockpot which actually happens to belong to my husband. 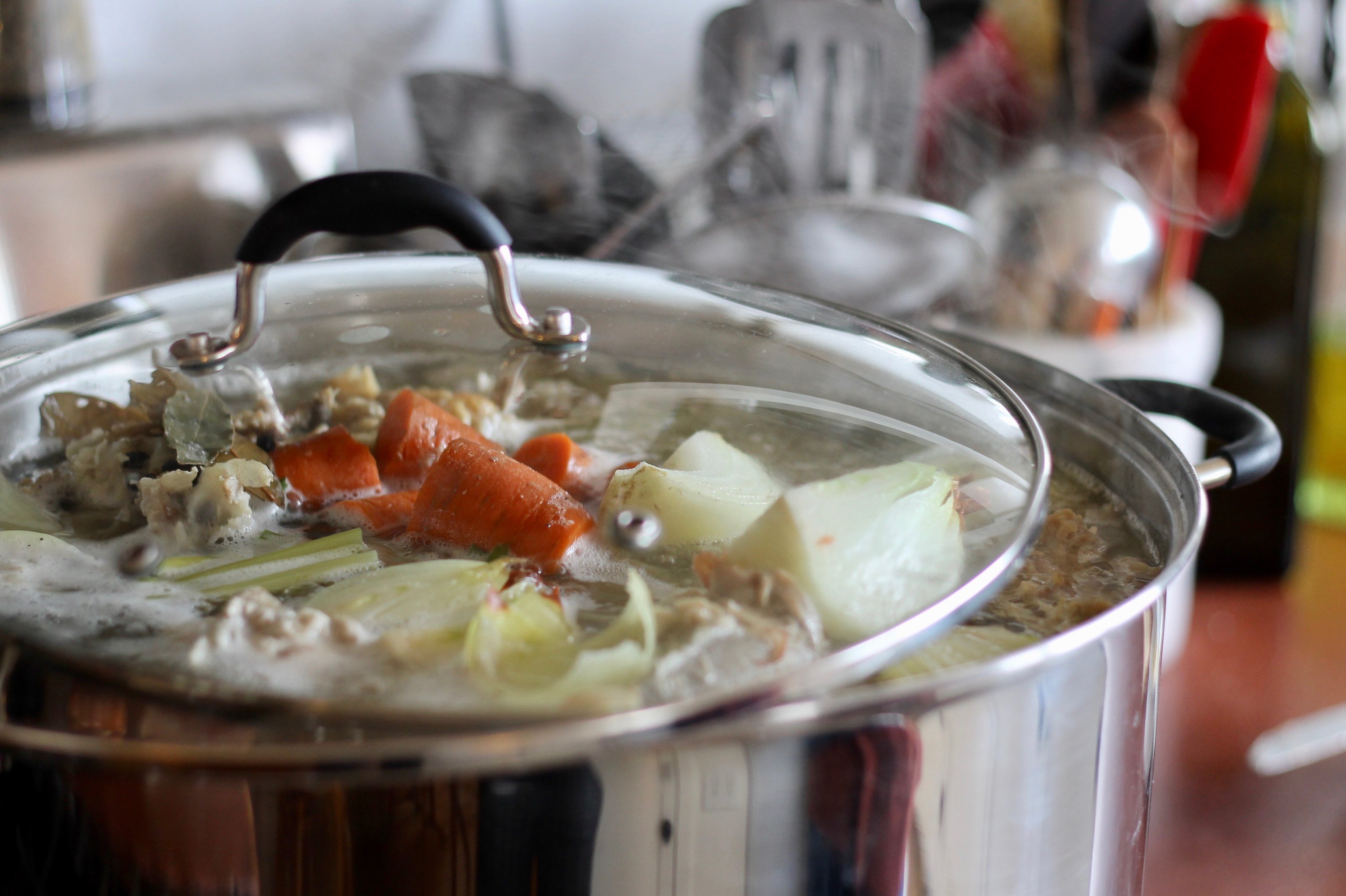 Whenever we make applesauce, my husband always fusses up a storm about needing a bigger pot so last year I got him a right fine handsome one for his birthday — It holds twent-one quarts! It doubles as a canner! — and then he was all like, “Oh, I see. You’re using my birthday to get what you want,” which was absolutely not true since I was perfectly chill with the pots I already had so I said I’d return it but he was like, “No, no, it’s a good pot and we’ll use it” [wink-wink], and I was like, “Fine, whatever, see if I ever buy you anything again.”

So I covered the bones with water, all the way up to the top, and then I added a couple stalks of celery, some carrots and a couple onions, peppercorns and several bay leaves and then set it on the heat where it simmered all day. I turned off the stove at bedtime, and the next morning I cracked the lid (to prevent this horror), and set it to simmer again. At that point, I could’ve strained off the liquid and I would’ve had a whole bunch of quart jars of broth. But since I don’t have much room in my freezers, this time I was going for broth jello — i.e. simmer it down until it’s so thick it’s jello. 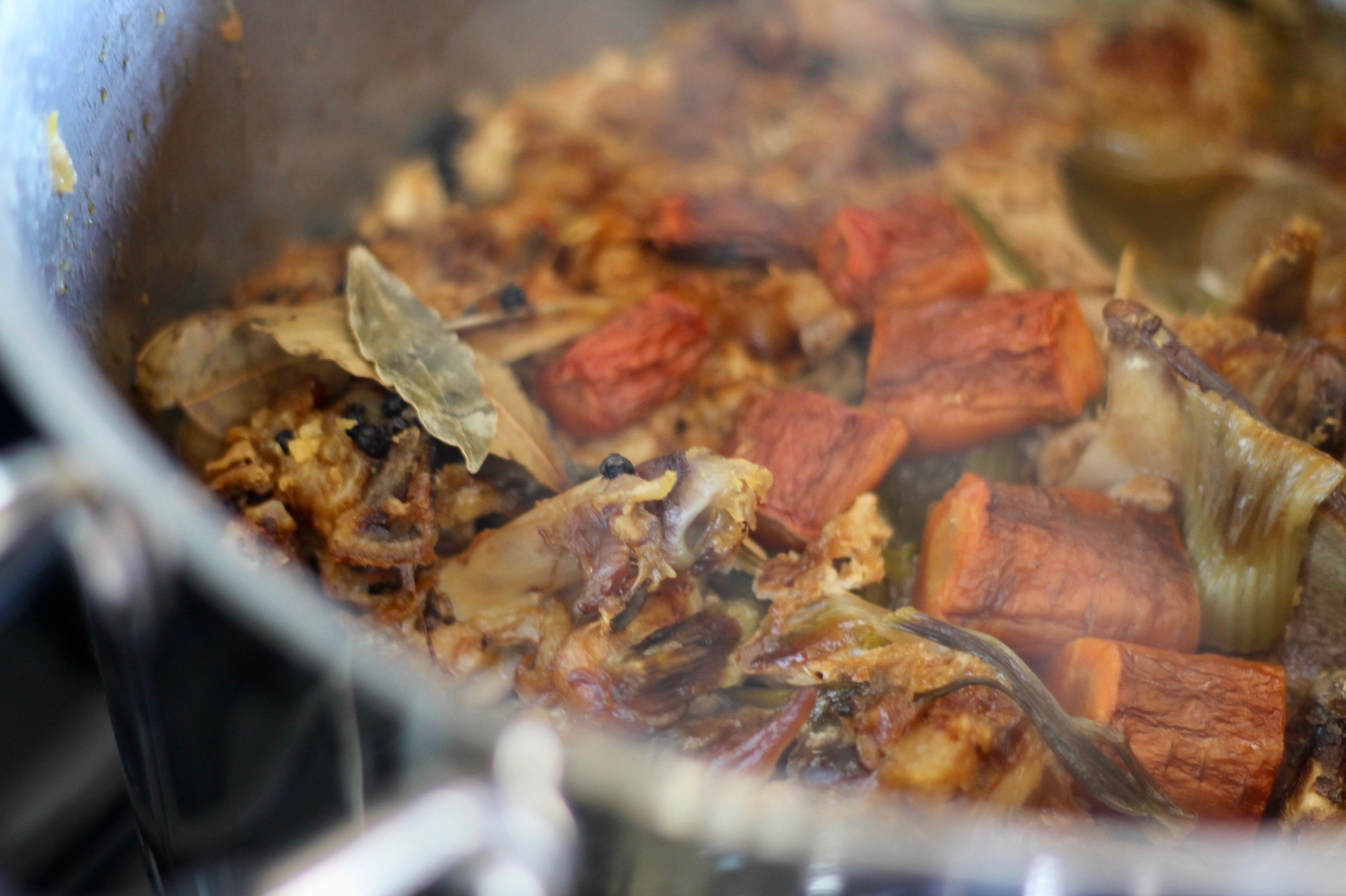 By that afternoon, the liquid had reduced dramatically. Was it a fifth of what it’d been in the beginning? A tenth? I’m not sure, but there wasn’t much of it. I strained the broth into a small kettle and put it in the fridge to chill over night. 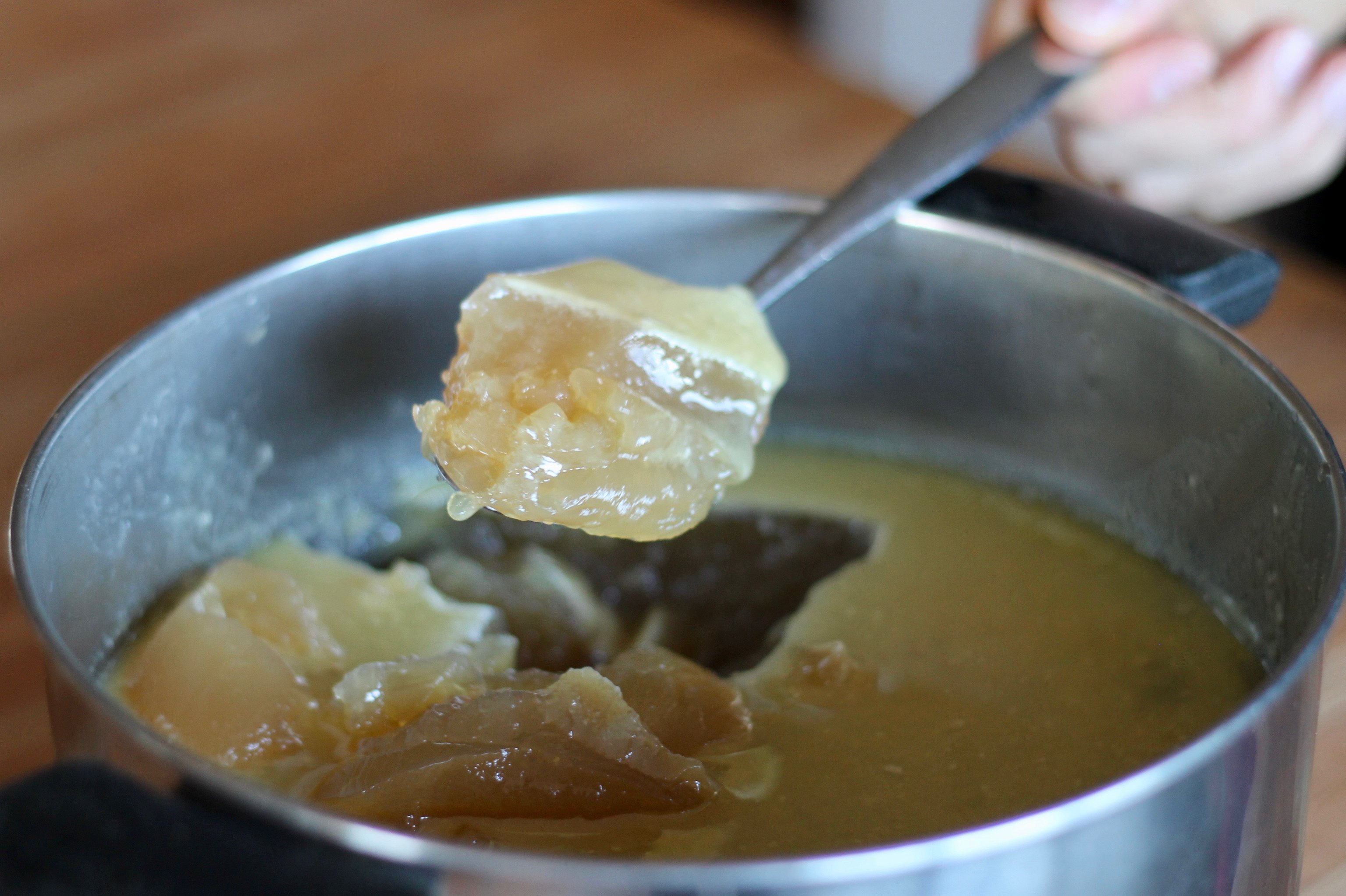 The next morning, I scraped off the thin layer of fat that had risen to the top (the dogs enjoyed it), and then spooned the broth into boxes, maybe four quarts worth. 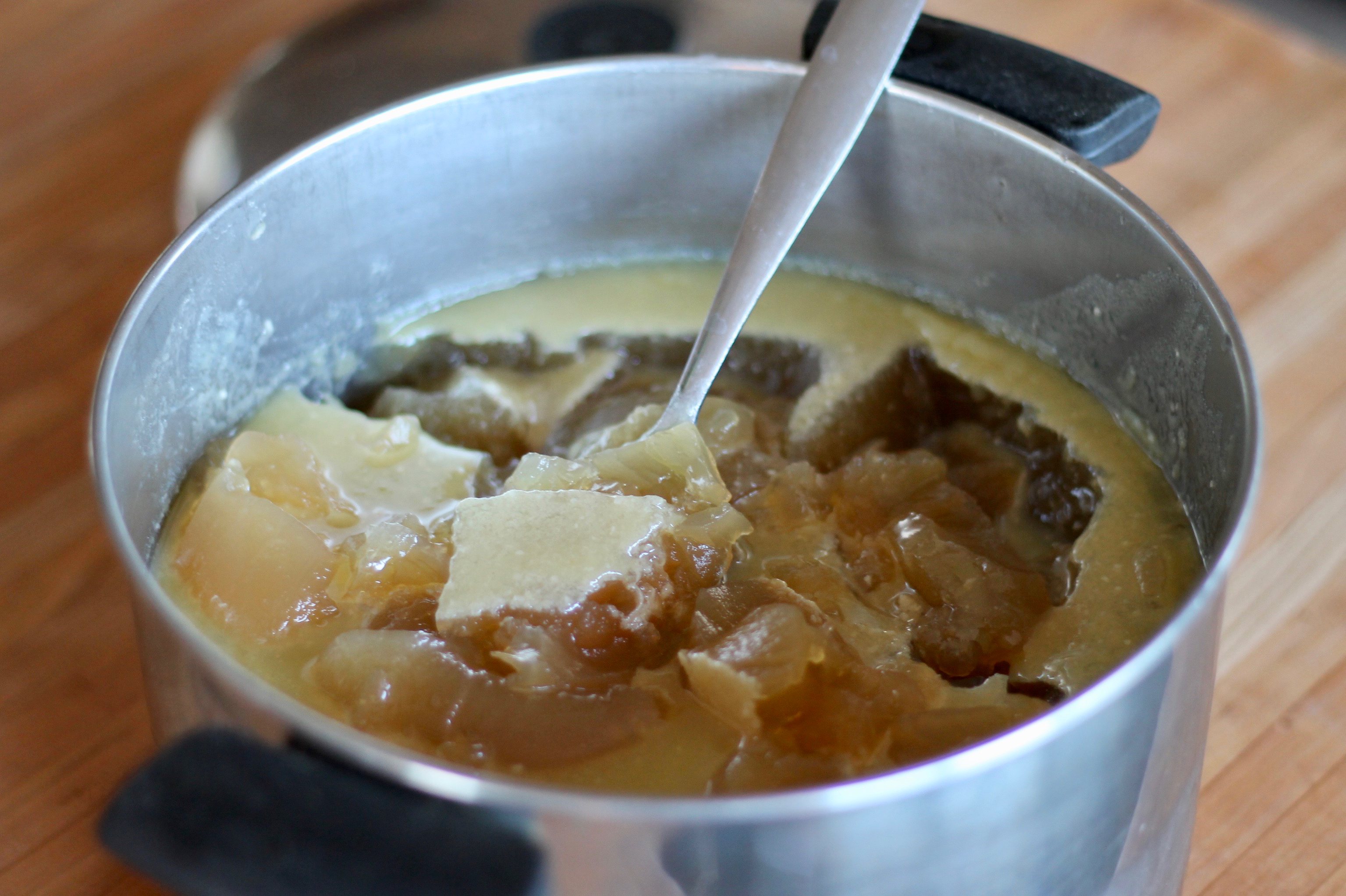 It was so thick I could cut it with a knife. 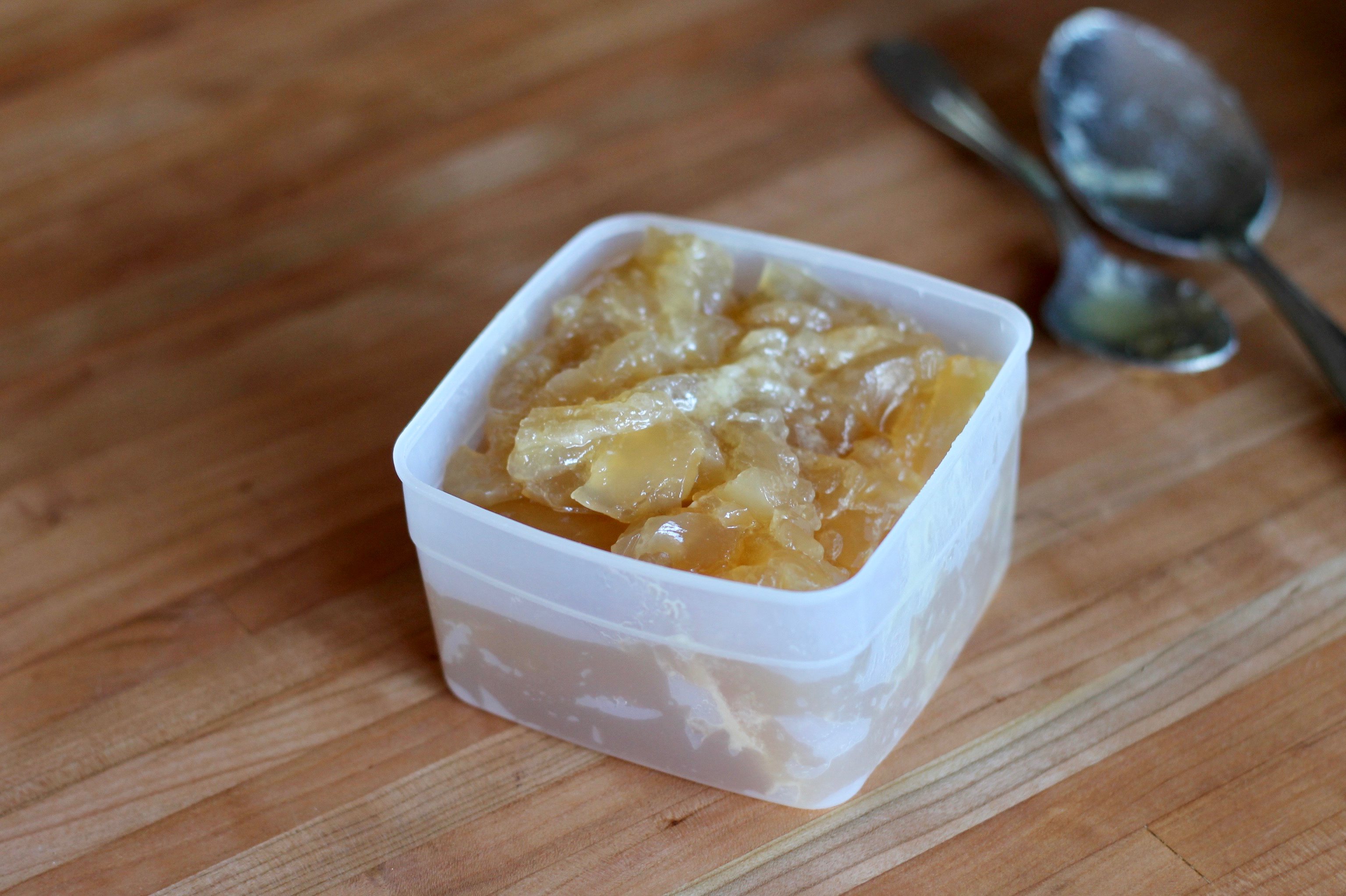 Put everything in your largest stockpot and fill to the top with water. Bring to a boil over high heat and then reduce and simmer for 12-18 hours. If you want regular broth, stop after a day of simmering. If you’re going for the jello, let it simmer for a couple days.

Strain off the liquid — I pour the whole mess into a colander and then strain it a second time with a fine-mesh sieve — and chill overnight. (Save the scraps for the dogs.) Skim off the fat and divide the broth into containers. Label and freeze.