Recently, my older daughter got a side gig breaking horses. Several times a week she spends a couple hours working with the horses. (There are about eighteen, and the owner wants her to “ground break” a bunch of them so they can be sold.) Upon her return, she’s caked with dust and full of stories about flying hooves and huffy horses.

Naturally, I was curious, so Saturday morning I followed her over for a look-see. I planned to stay for twenty minutes or so — just long enough to get a feel for what she does and snap a few photos — but the process was so fascinating that I ended up staying the whole time.

That day, she was working with two, three-year-old stallions. 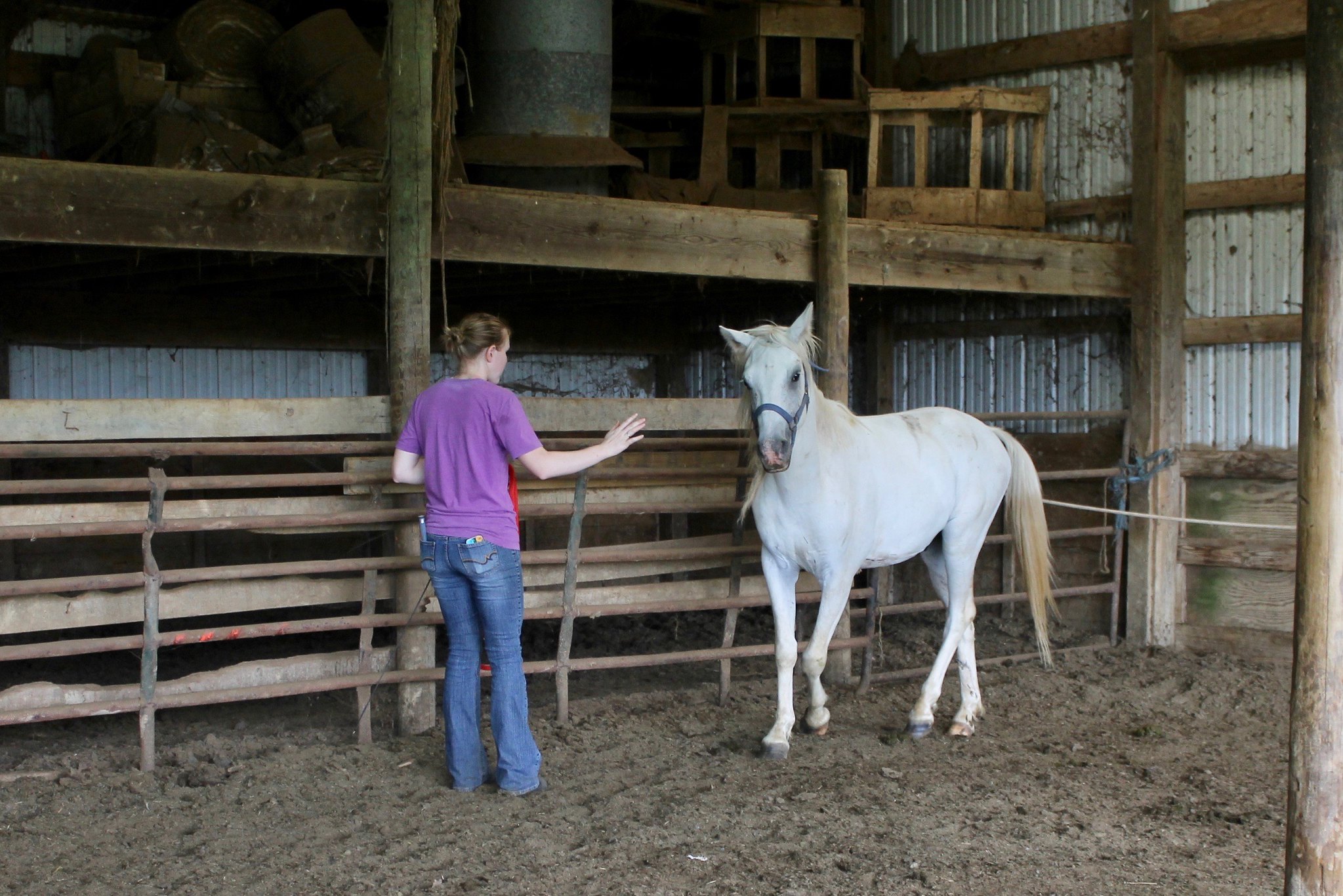 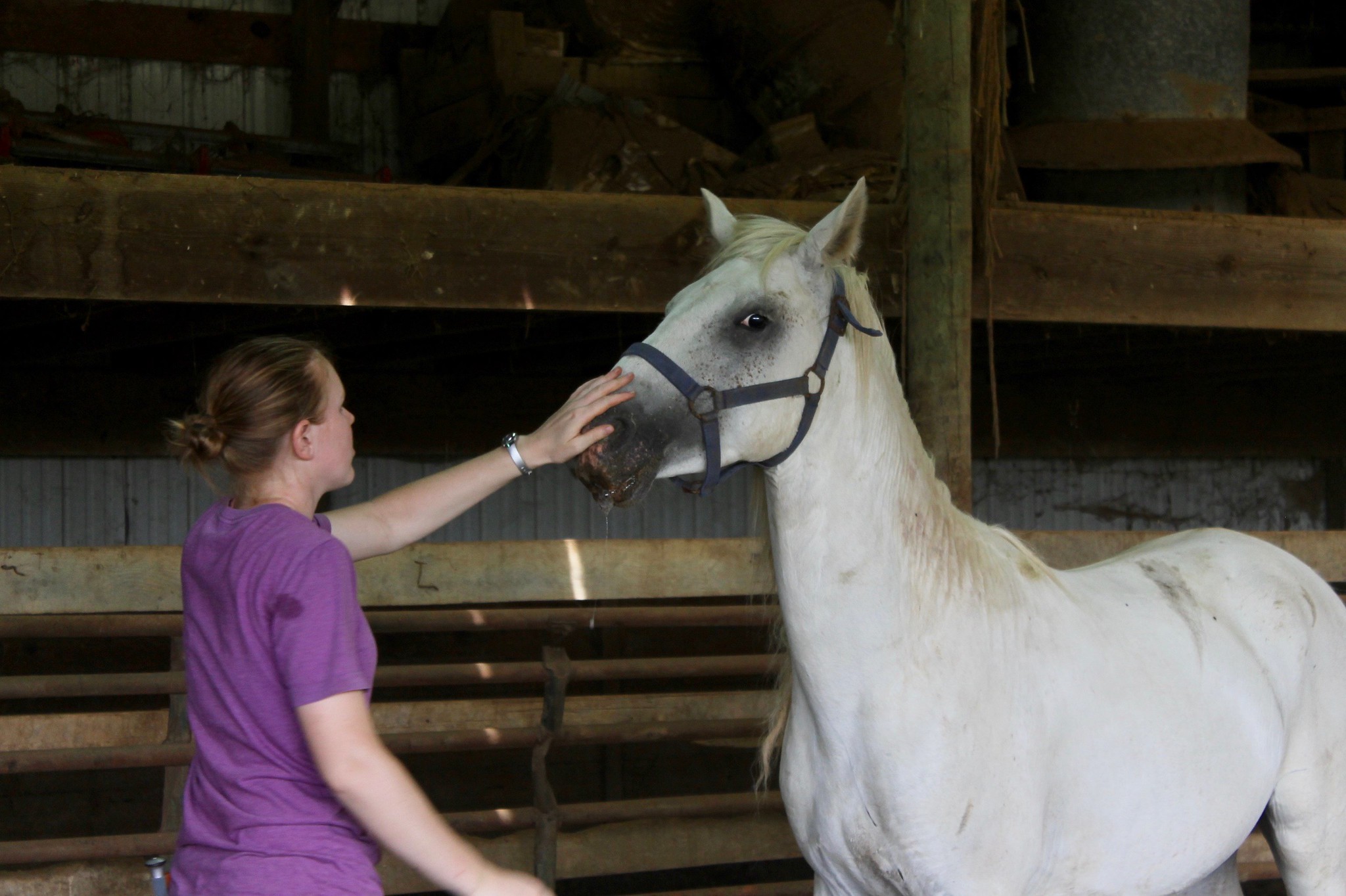 This was the third time working with each of them. She told me that when she’d started a few days before, the grey one had never had a halter on before, and the white one had almost no experience being led and was quite aggressive, bucking, kicking, and straight-up charging her. (“He’s just trying to protect himself,” she explains.)

The barn was divided into two pens: she worked a horse in one section while the other horse (and I) waited in the other. Every now and then the waiting horse would sidle over to and I’d get scared. 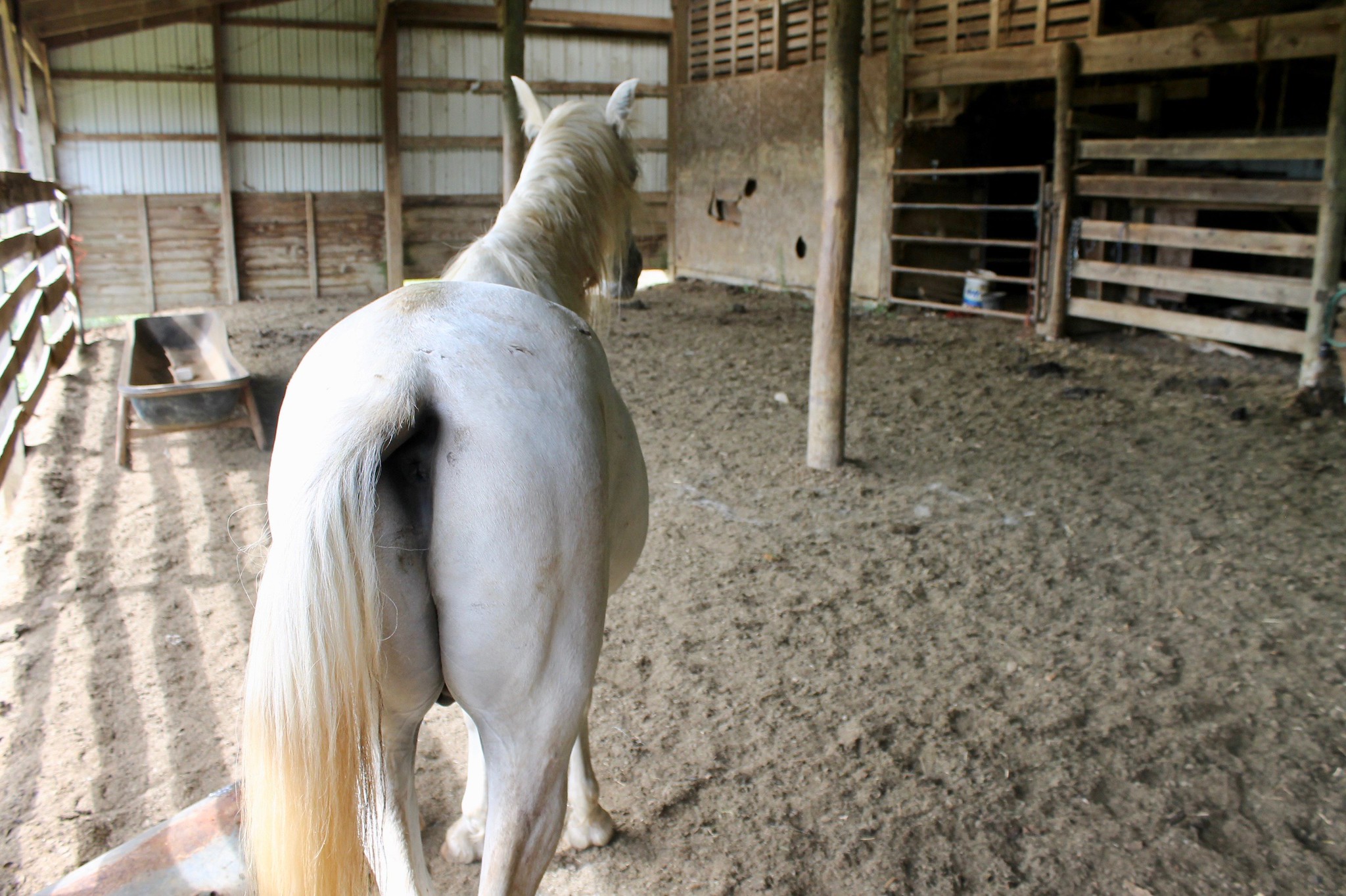 But then when he closed in on me, butt-first, the actual probability of getting hoof-hammered increased exponentially. Visions of shattered hip bones and busted kidneys flitting through my mind, I quickly, as per my daughter’s recommendation, relocated to the top of the fence. 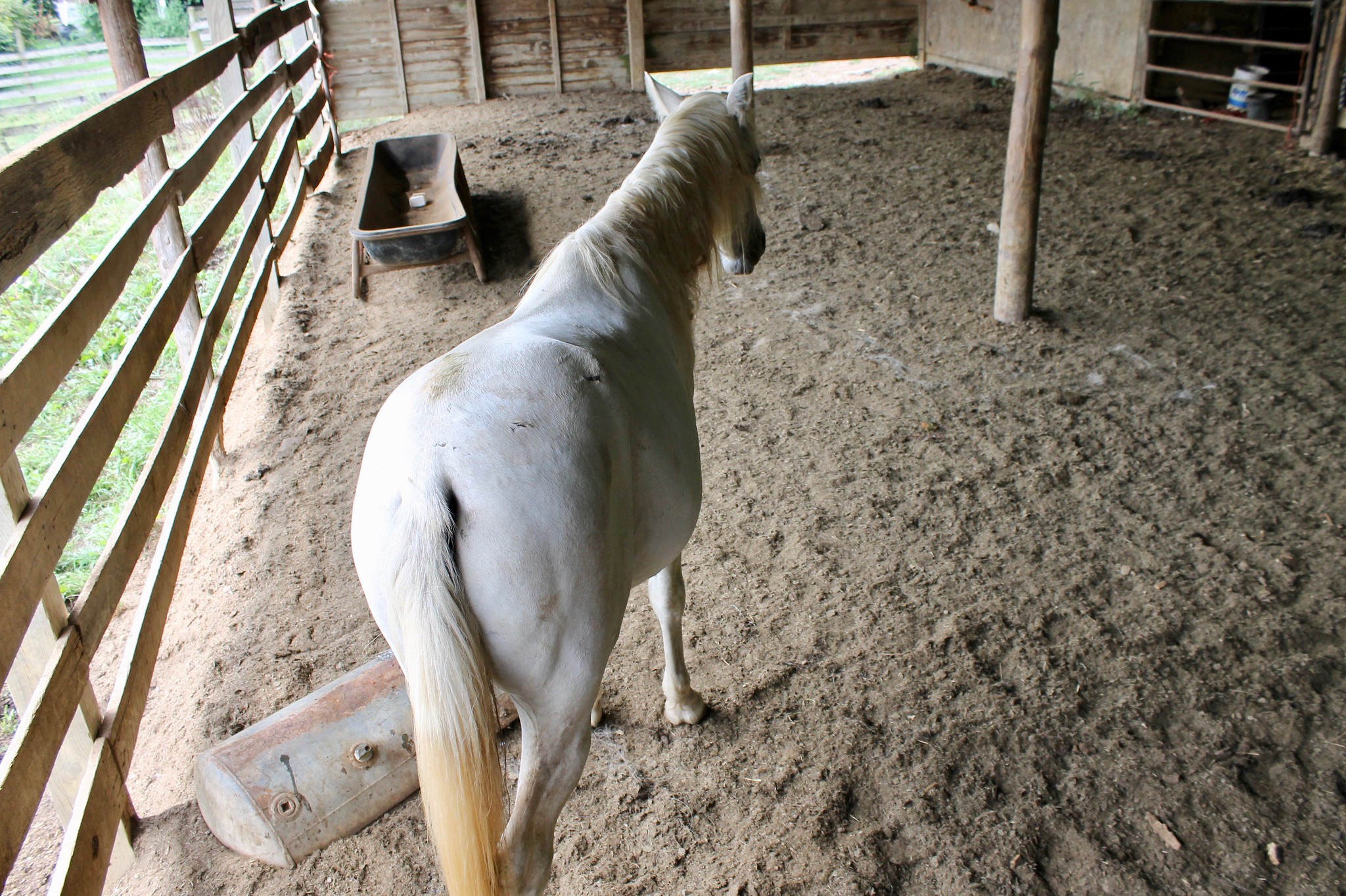 “Am I safe now?” I asked, teetering on the edge.

My daughter peered through the wooden slates, judging the distance between horse and mother. “Probably,” she said (rather unconvincingly). 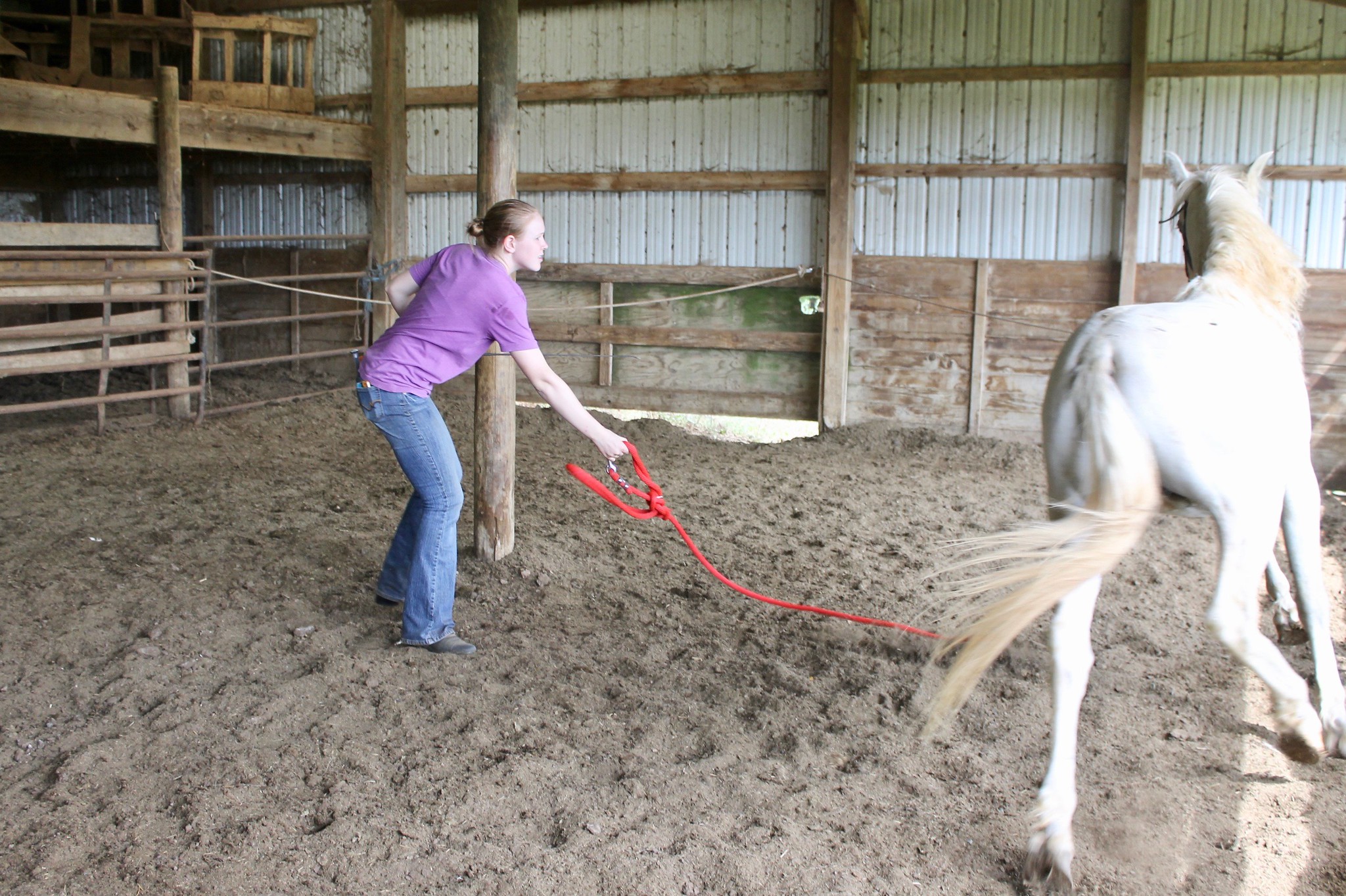 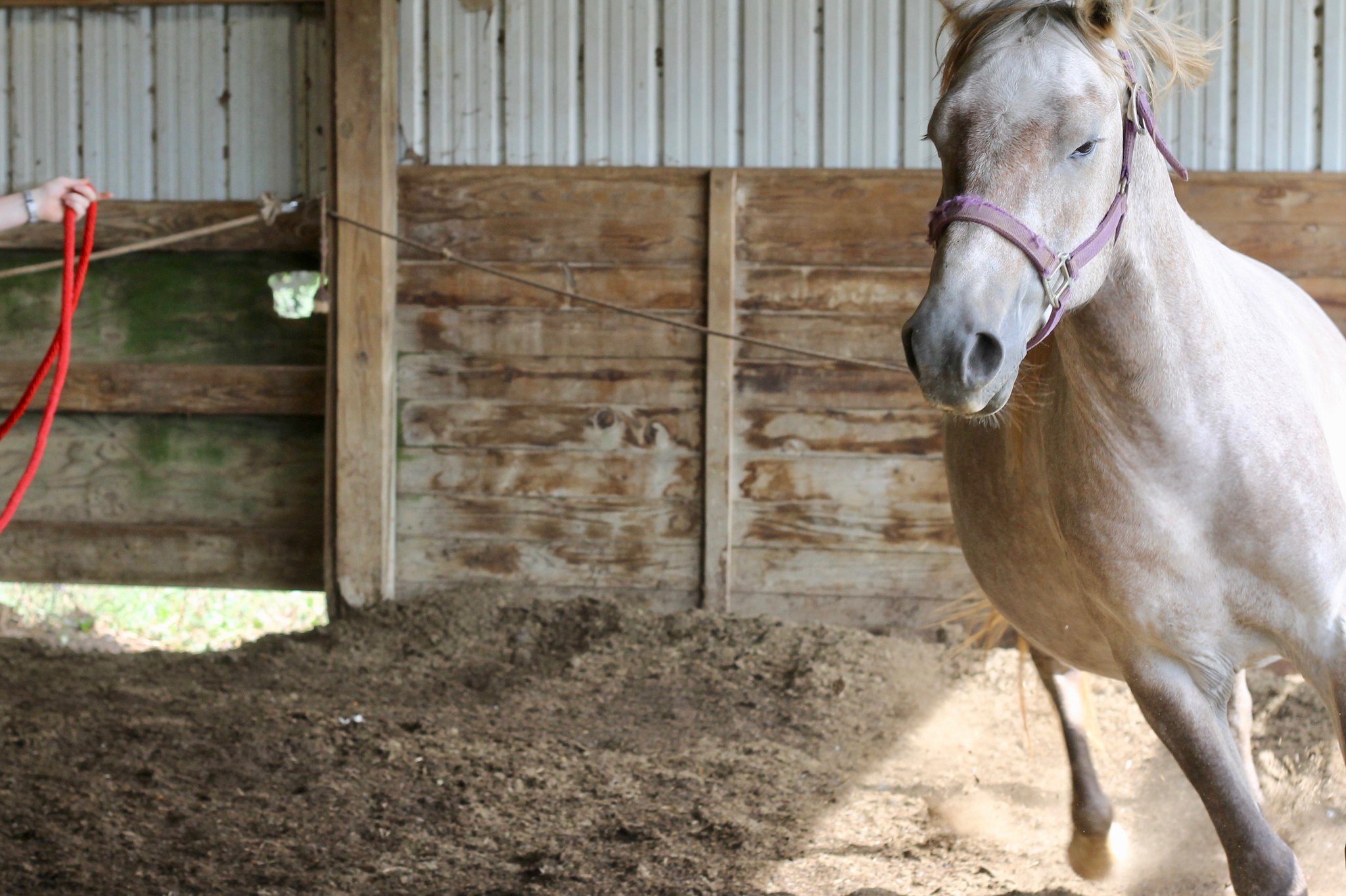 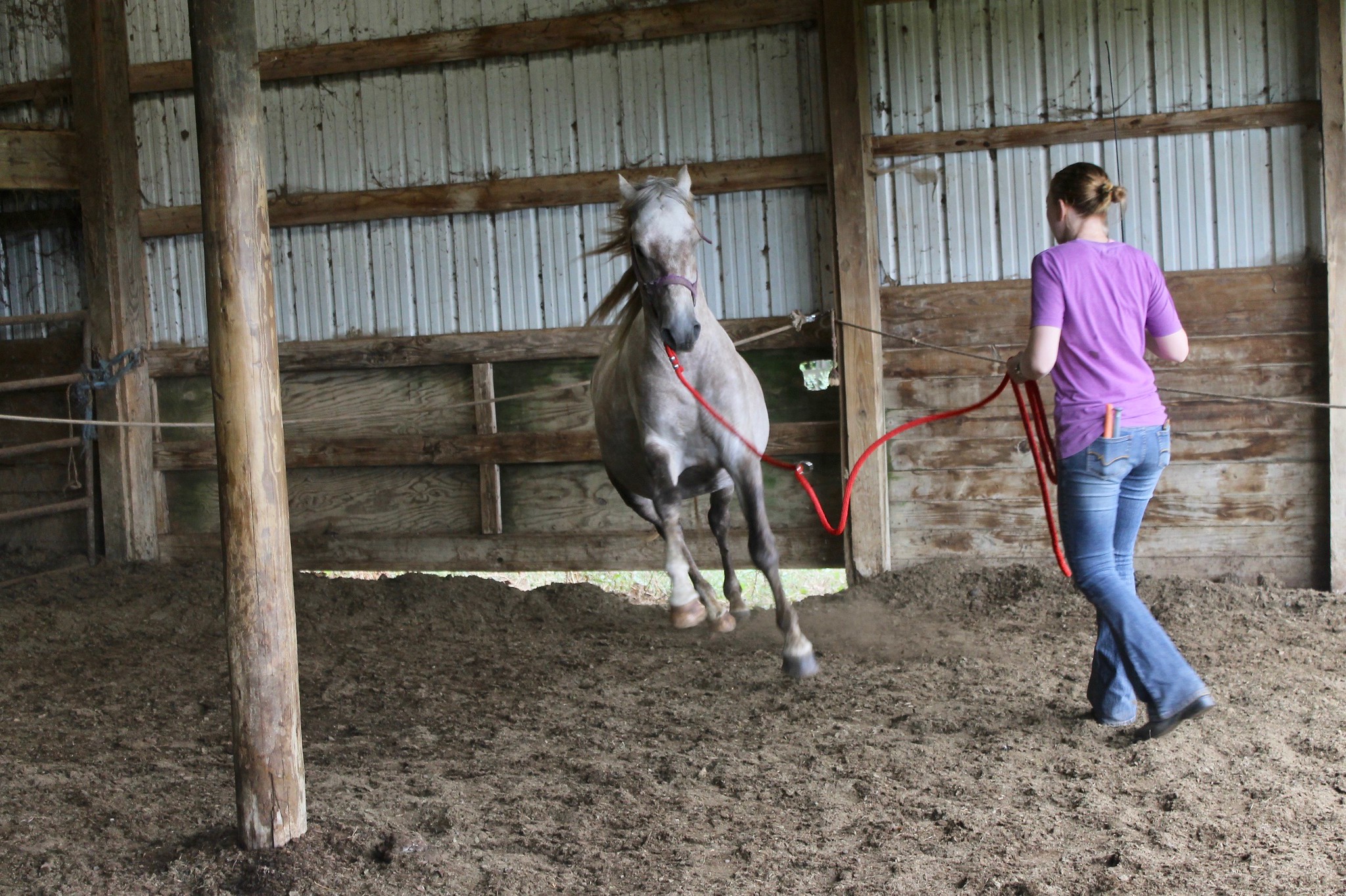 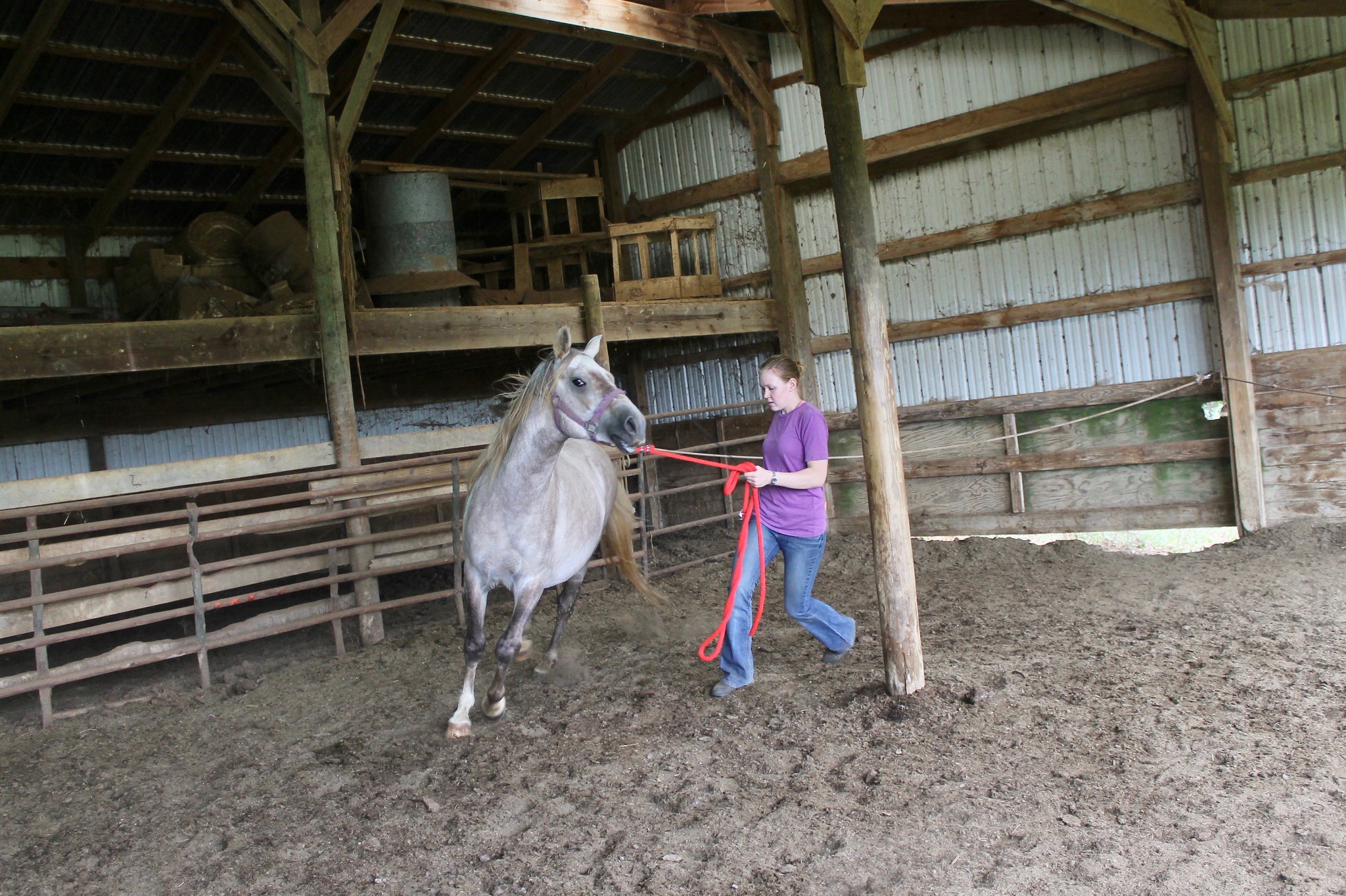 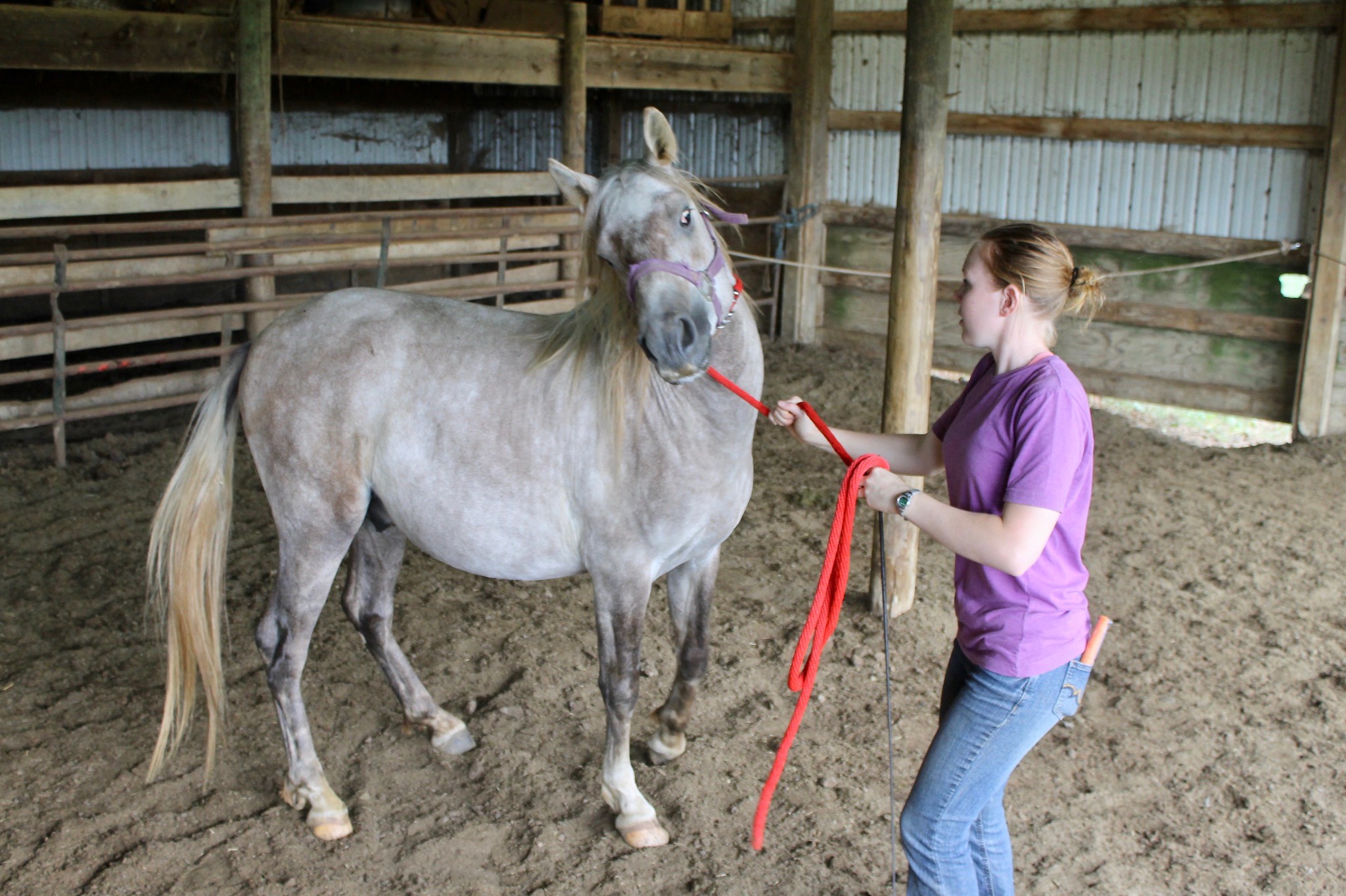 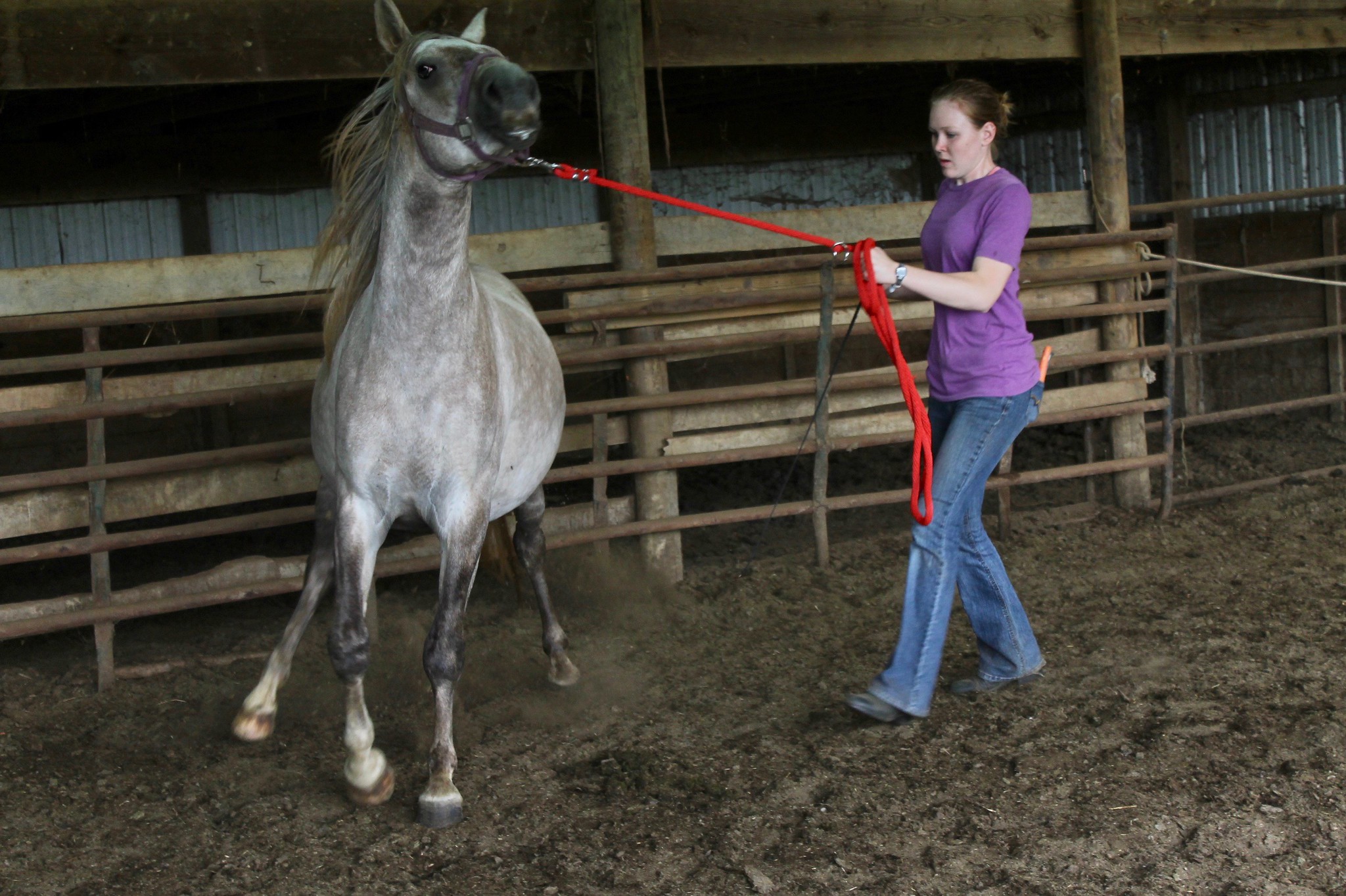 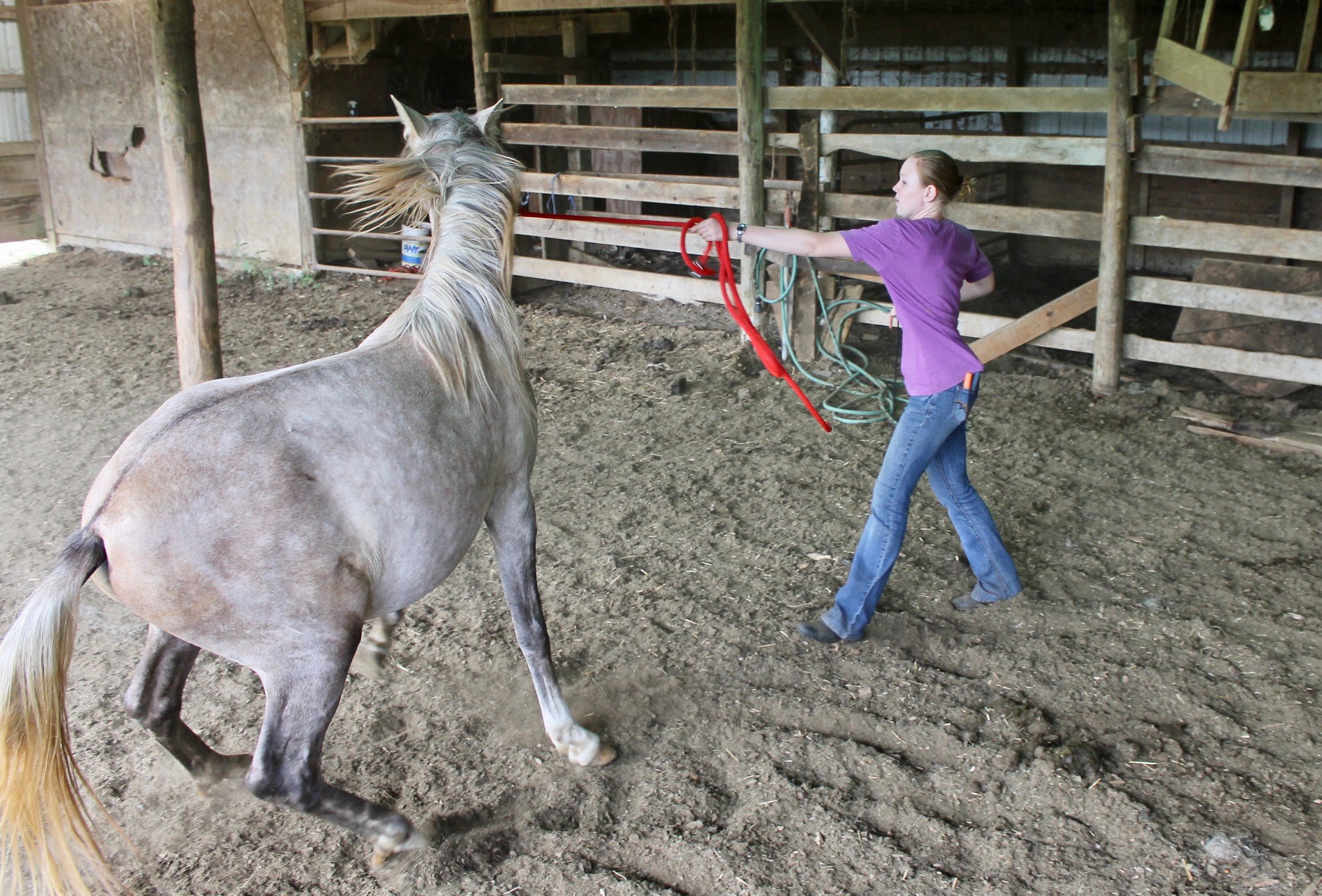 Once they’re tired, she:

*Strokes them all over… 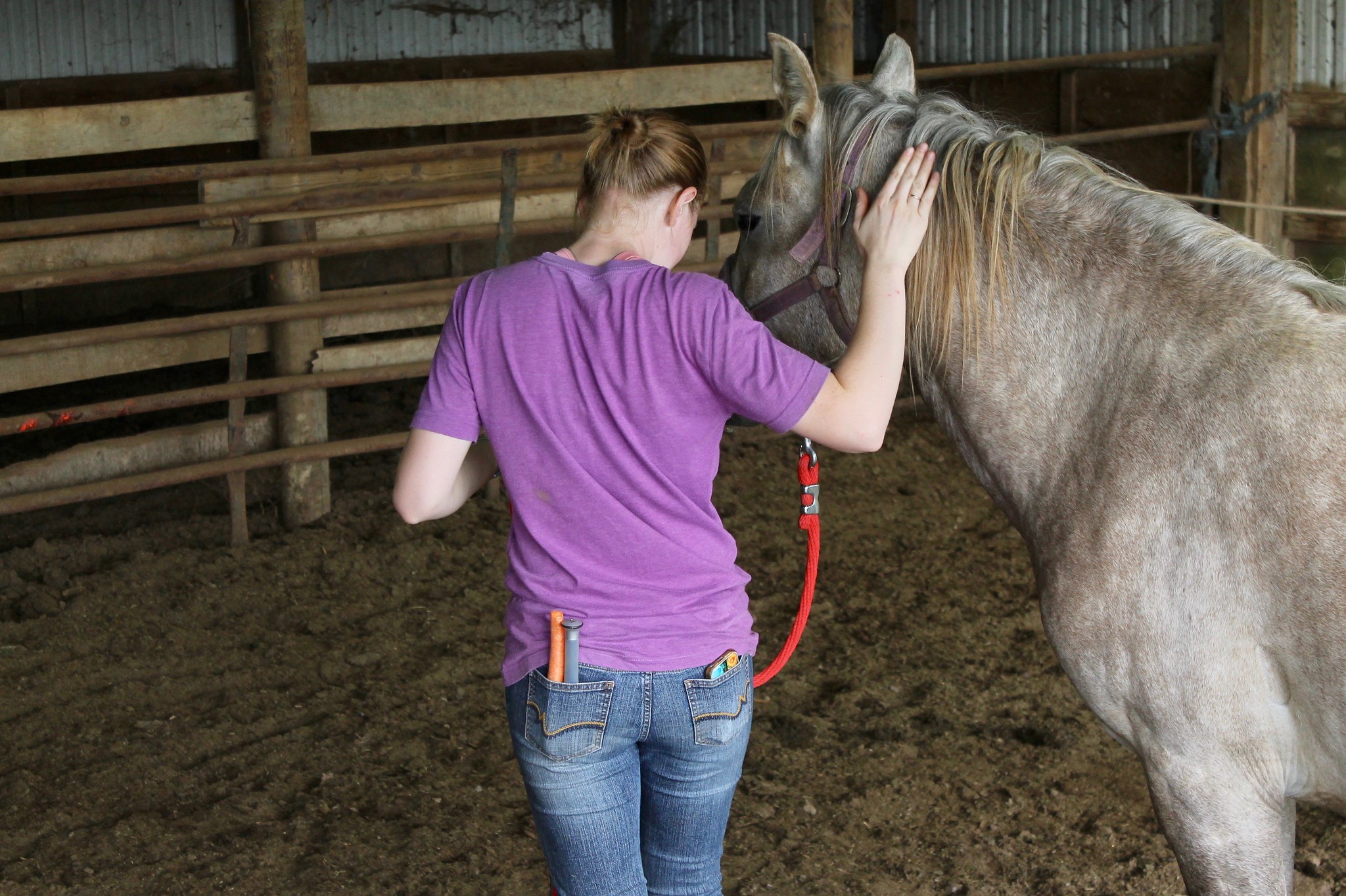 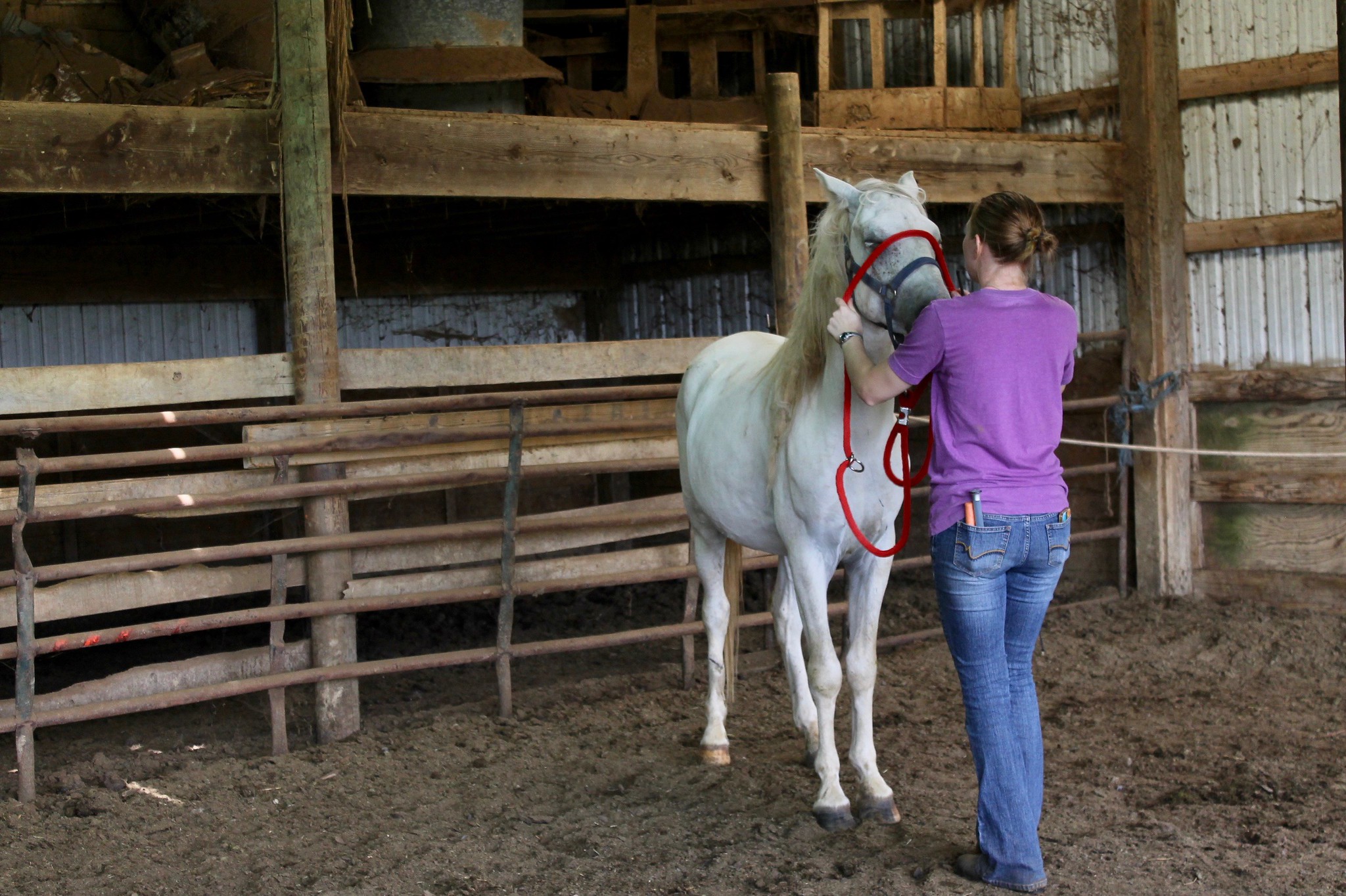 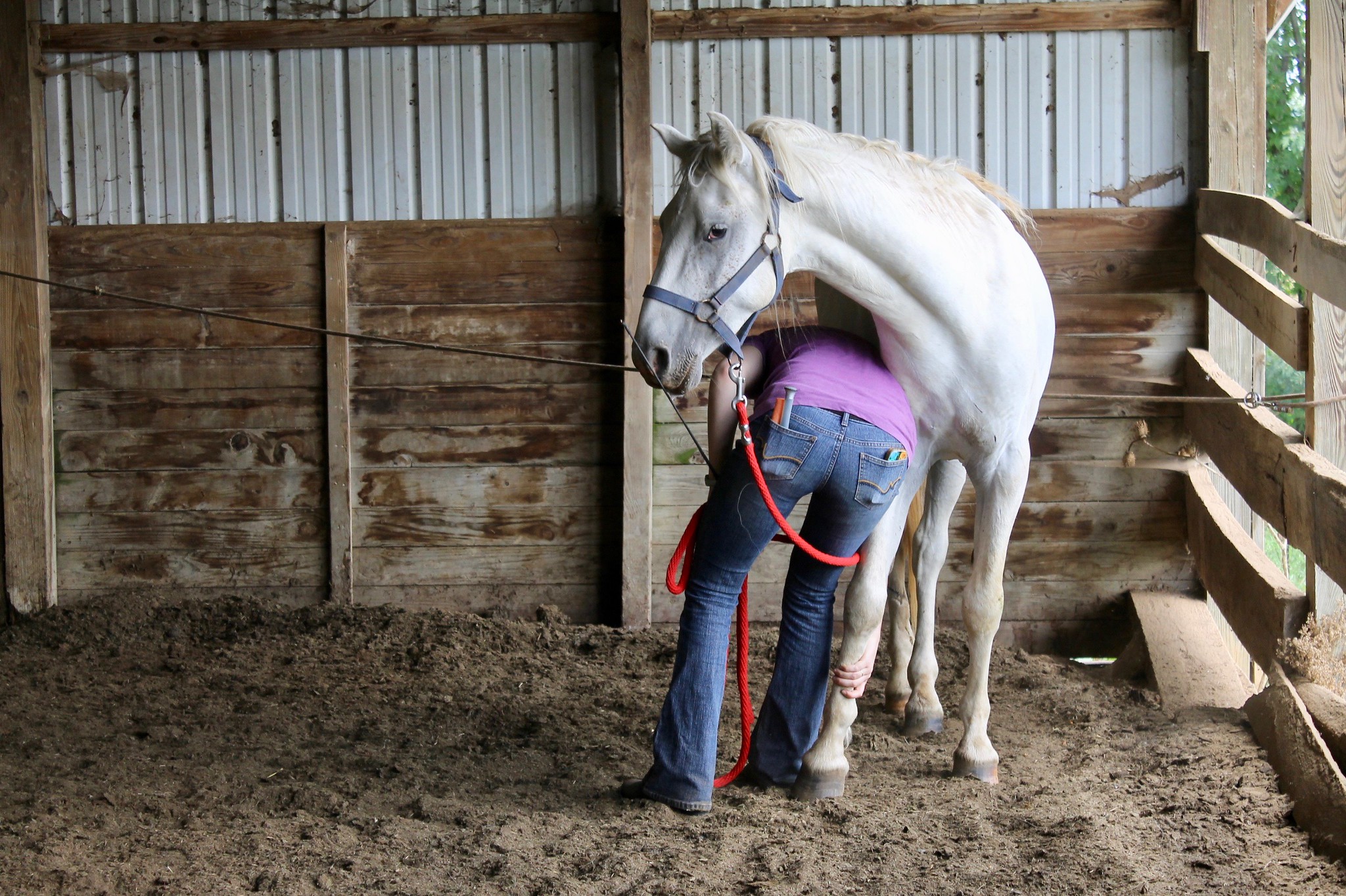 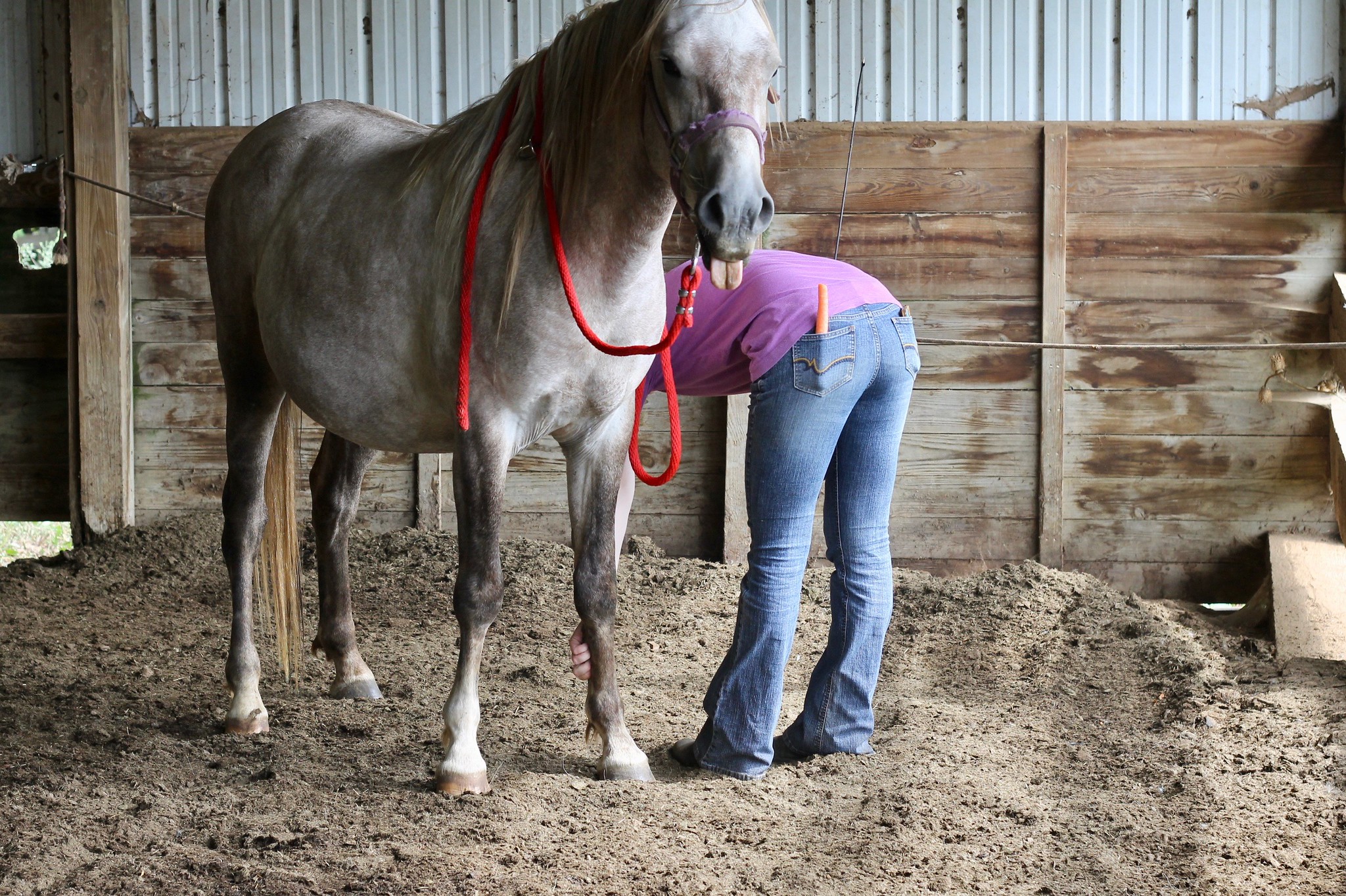 *Tap-tap-taps them (first the shoulder, then the rump, then the other side) with the whip to get them to shift their weight over… 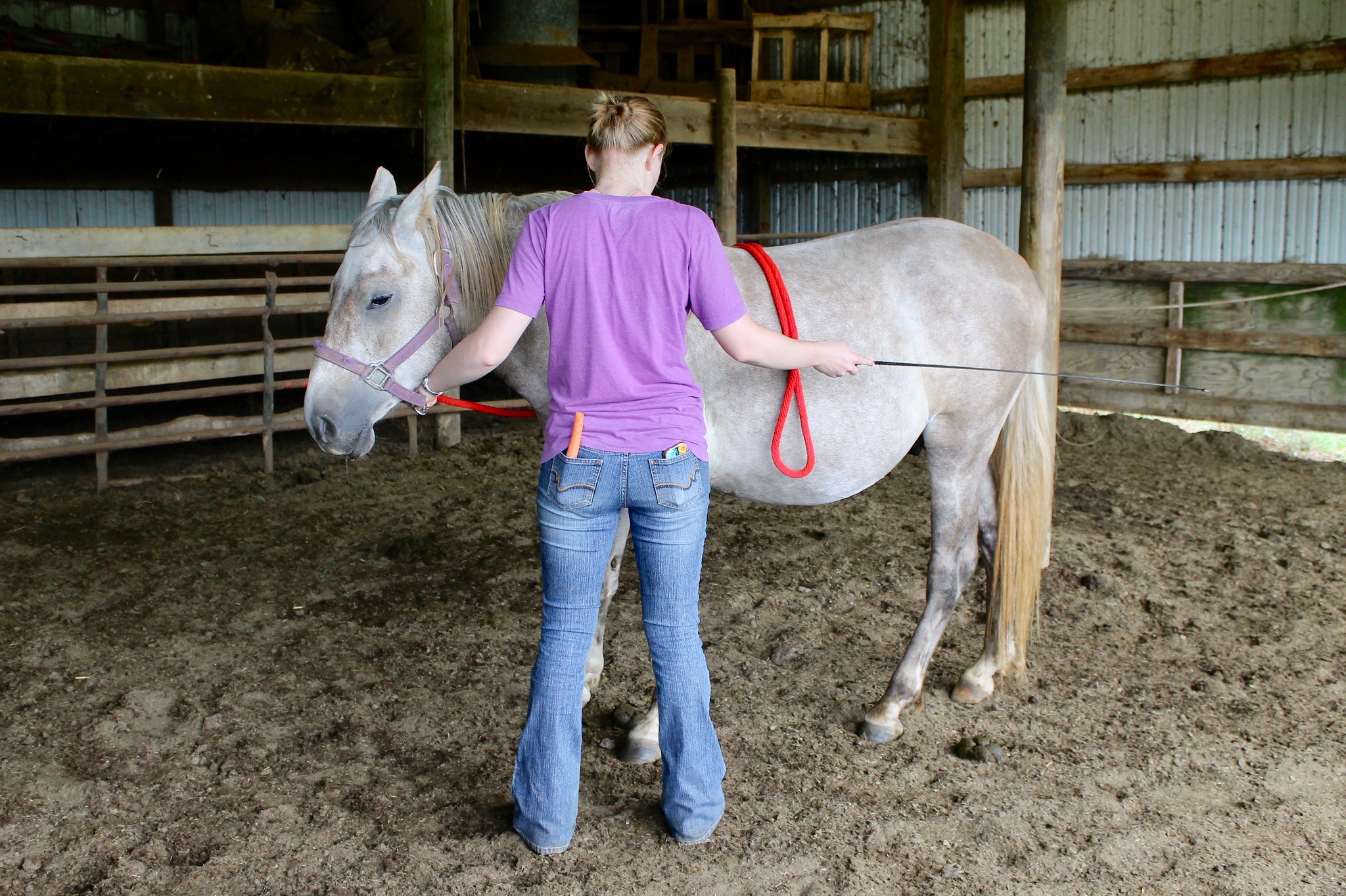 *Leads them on both the left and right side, making sure they maintain a suitable distance from her… 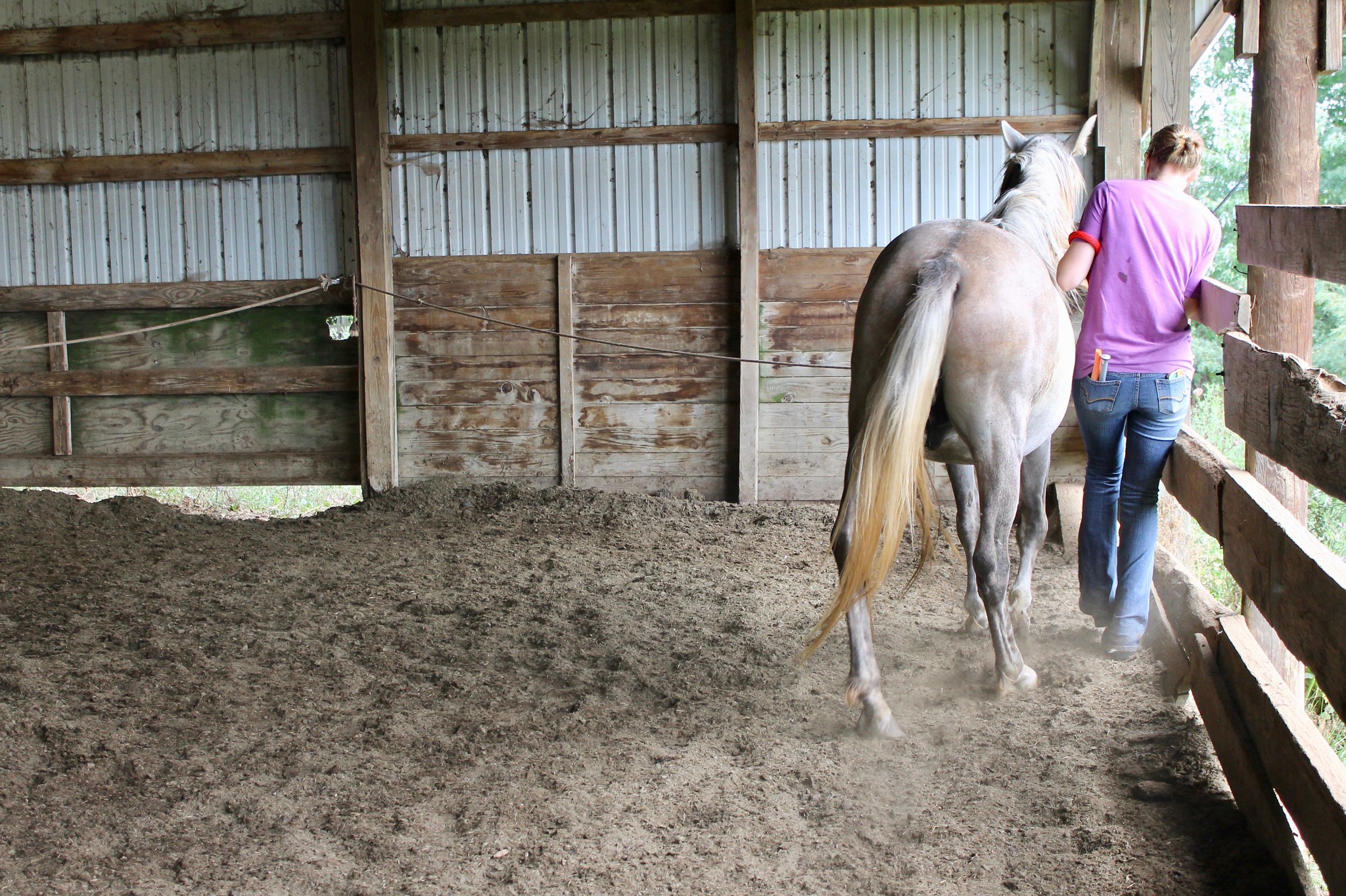 Not a suitable distance. 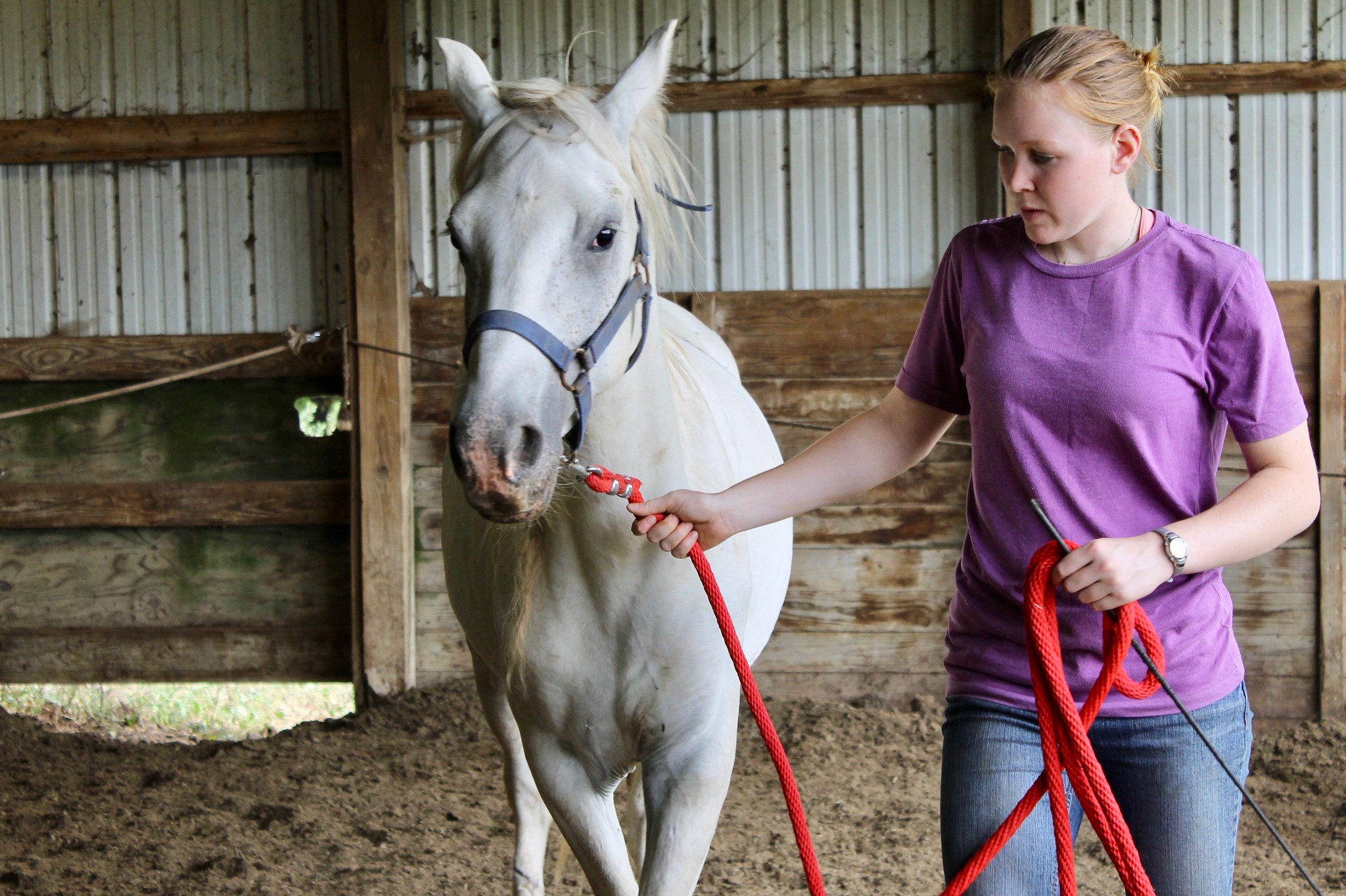 *Teaches them voice commands — walk, ho (stop), trot — and to not turn their butts to her (“That’s so rude!” she scolds)… 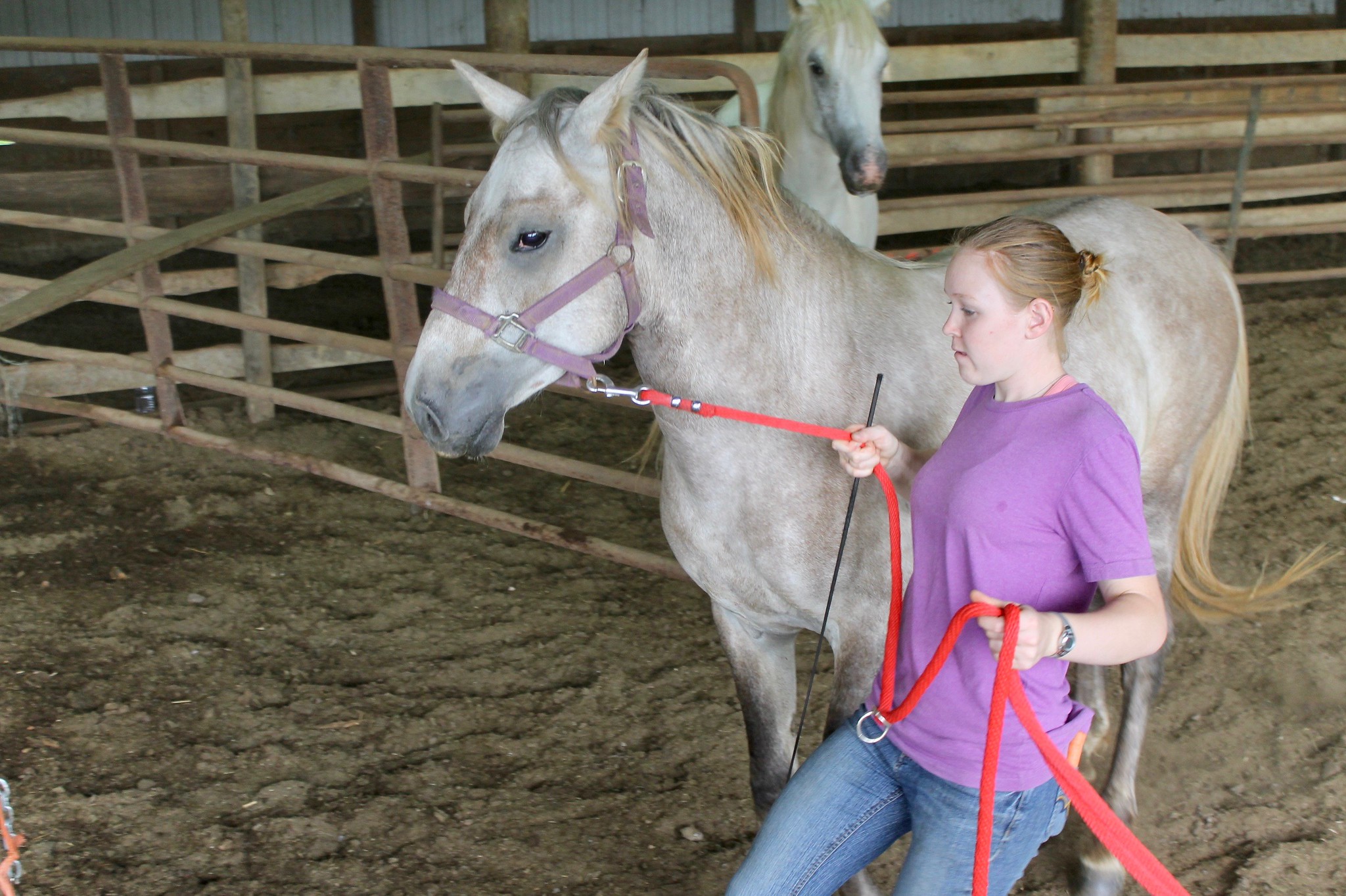 *Trains them to turn with the rope, not against it… 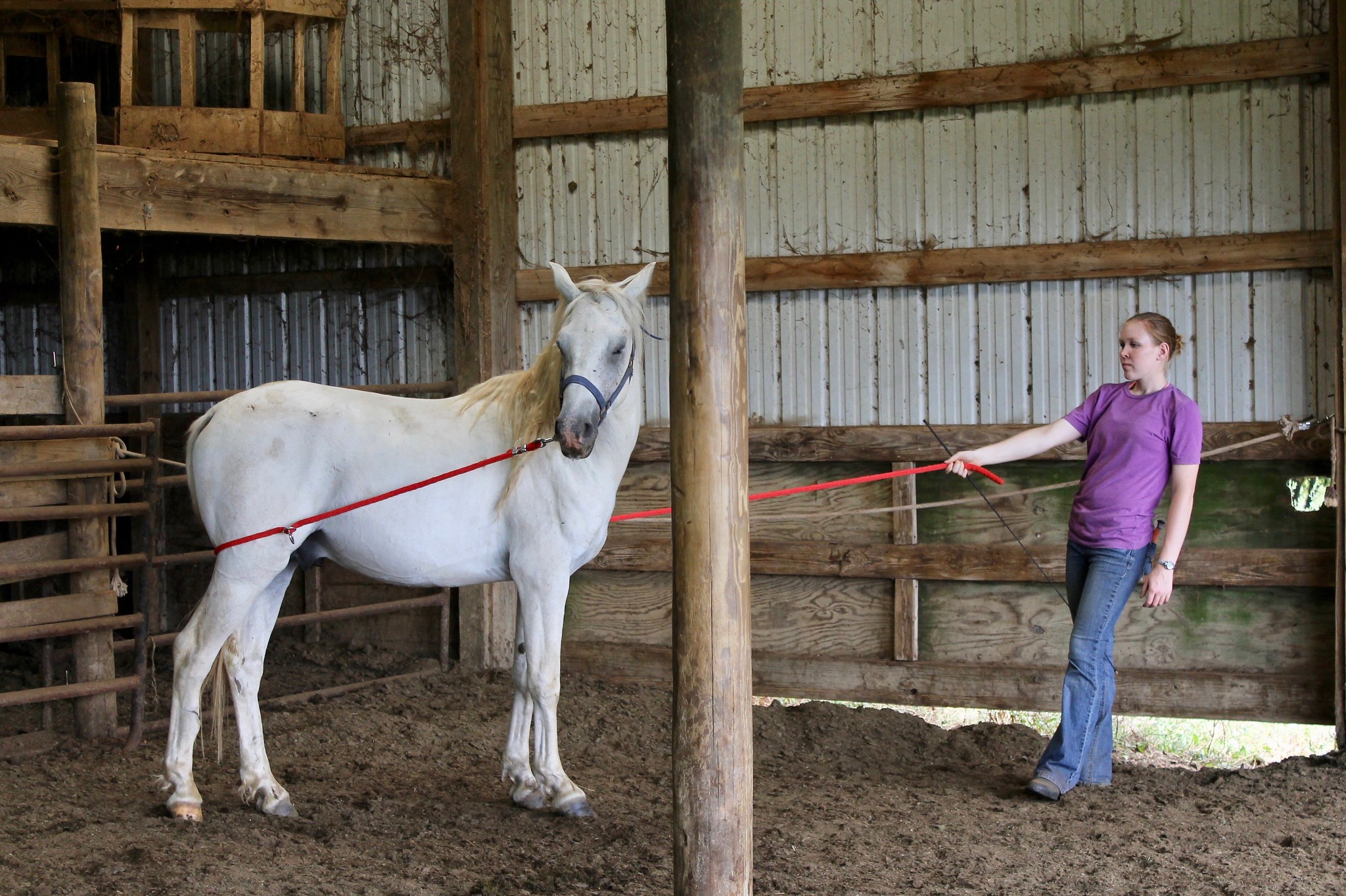 That last step, she did over and over, first wrapping the rope around their backside and tugging, and then, once they got that, just draping it across their backs and then their necks, waiting until they turned away from her, following the rope to unwind themselves. 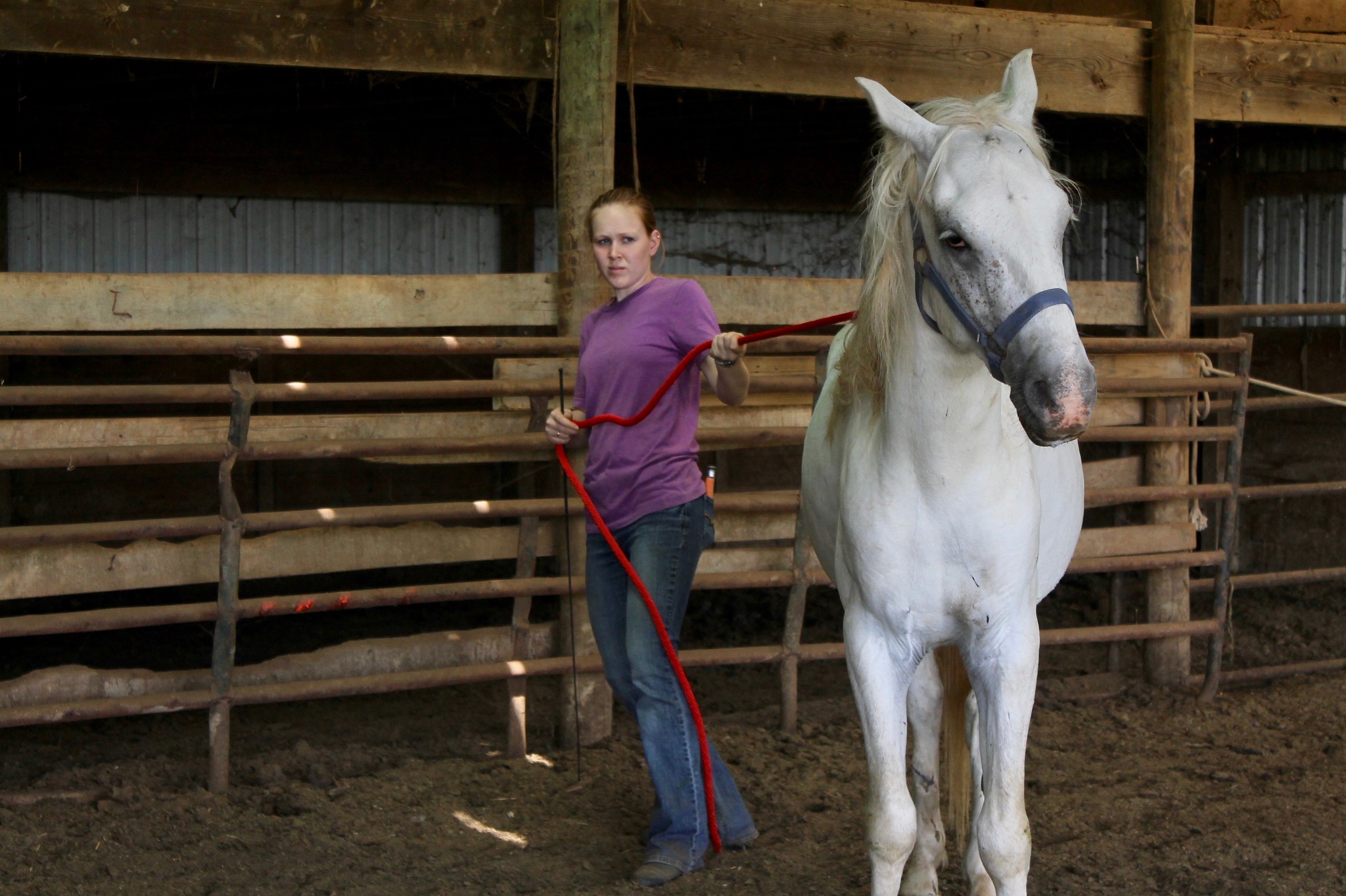 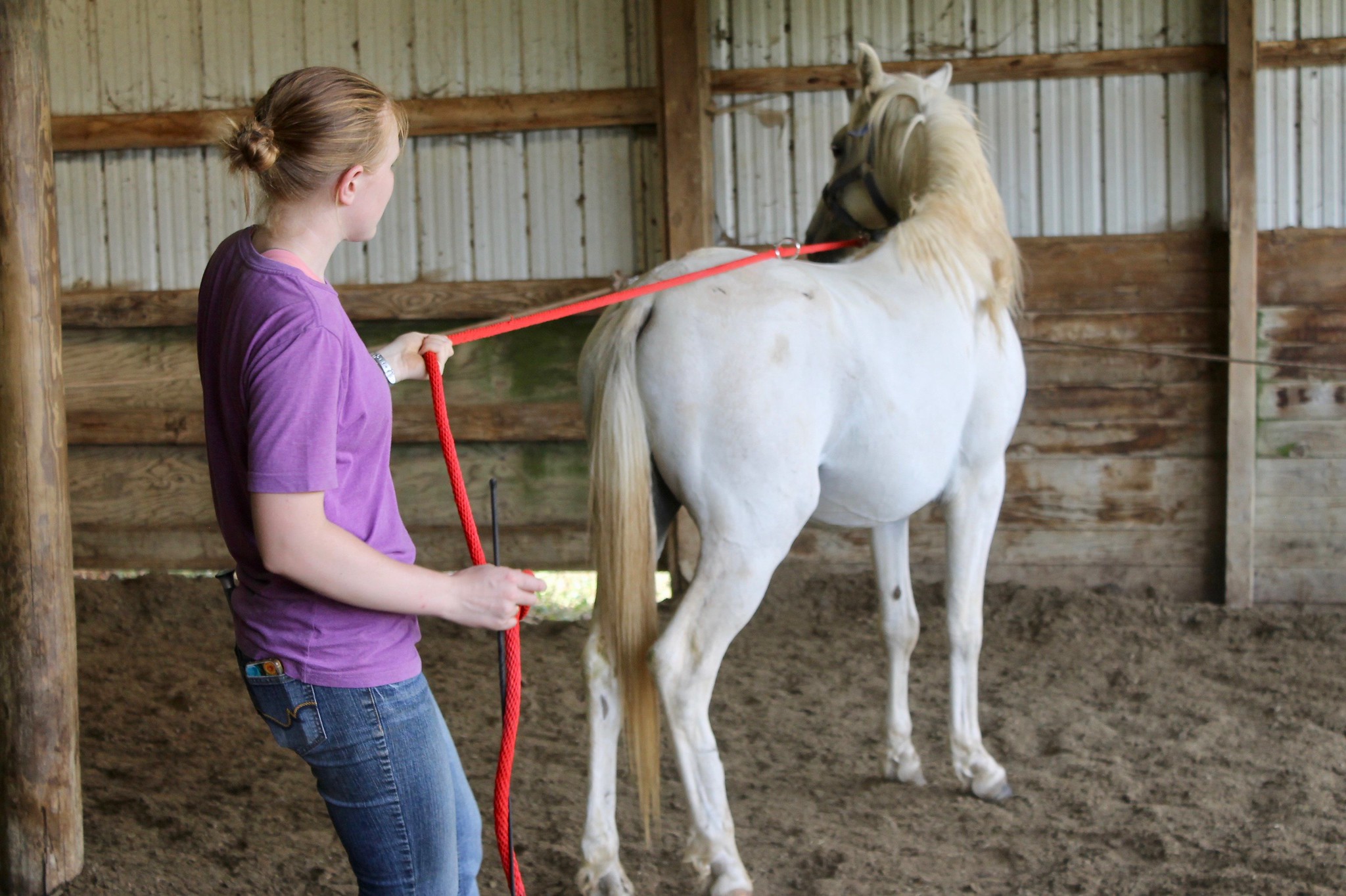 By the end of each session, the horses were remarkably compliant. She tried to reward them with bits of carrot but apparently untrained horses don’t know the glories of orange root vegetables. 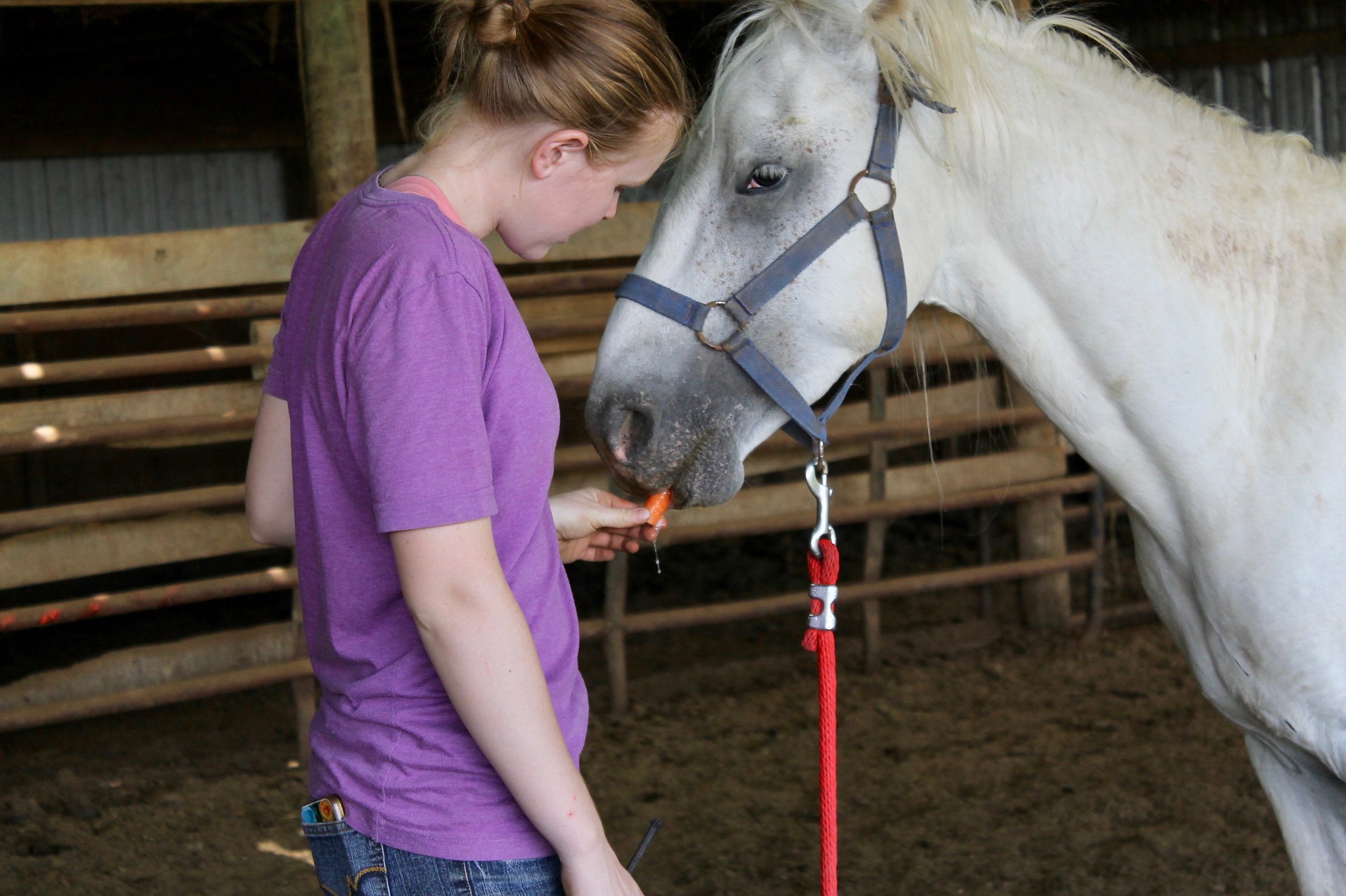 That, it turns out, has to be taught, too.