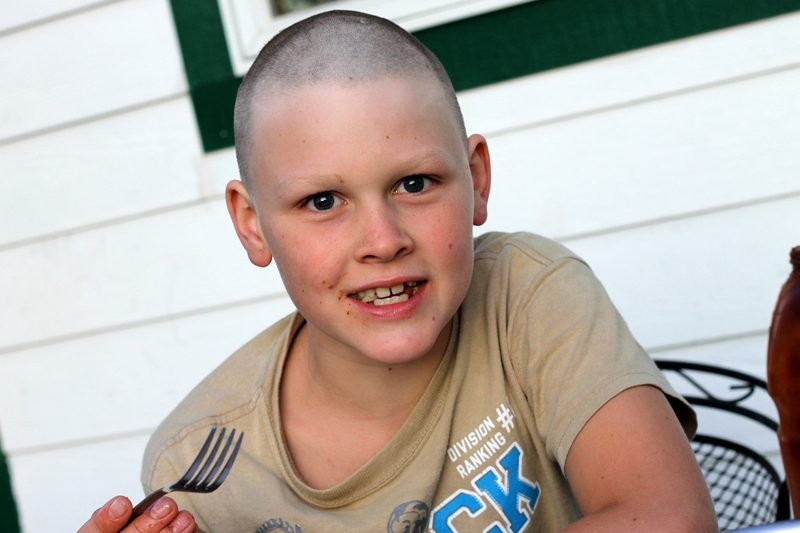 My younger son calls steak “steek,” as in, “Man, this is good steek.” 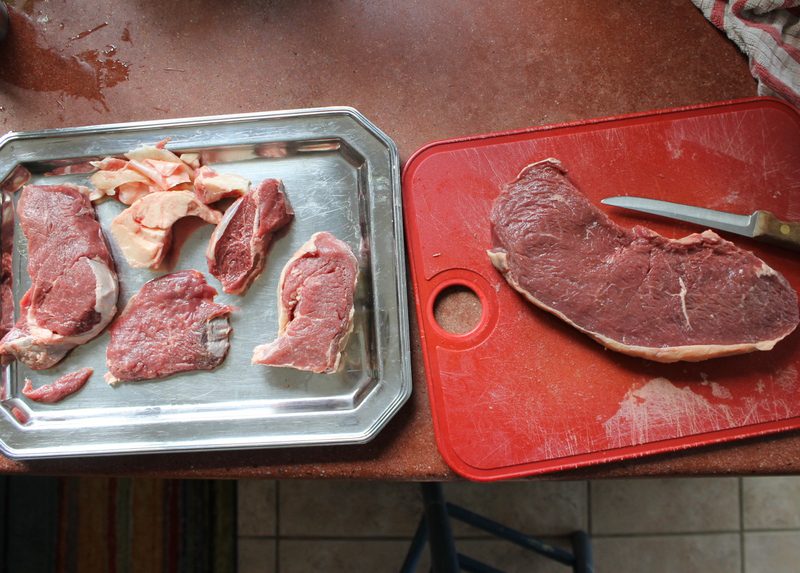 I’ve cooked steak twice now, and so far only on the stovetop. The first time, it was just me and my husband at home. We watched a series of how-to-cook-steak videos together (here and here), and then I cooked each steak individually, testing the firmness of the meat against our own skin (there’s the finger test—so cool!—and the arm test), and then cutting it in half to see if we were getting the desired results. 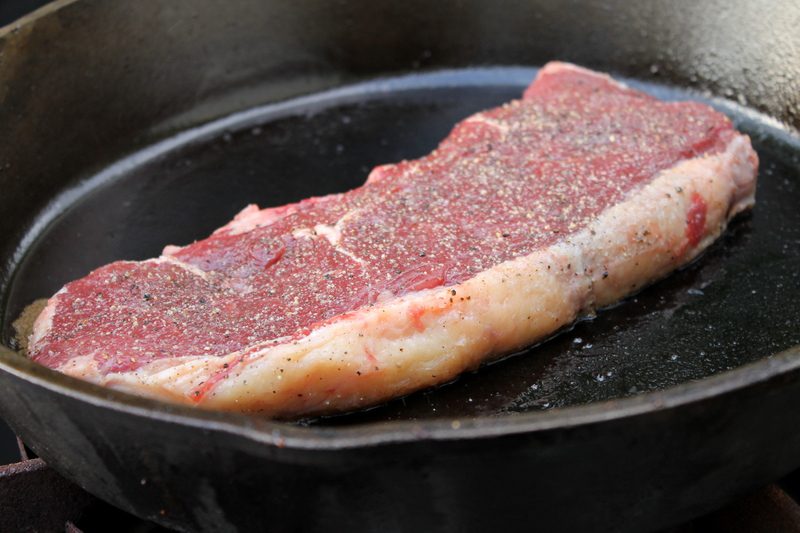 We also cooked several potatoes that my parents had given us (because we were out of potatoes and we simply had to have potatoes to go with our steak), mashing them up, peels and all, with lots of hot milk, butter, and salt.

And ate some more.

My husband snorted at my slightly faulty logic—okay, okay, erroneous—but the meal did feel incredibly satisfying and nutritious and healthy. Sanctimonious, practically.

(Oh, and then I—get this—left the big tupperware container full of gorgeous strips of medium rare steak out on the counter overnight. I was so mad at myself! But then I emailed my aunt, an excellent cook who is also a non-alarmist pragmatist, and she said we could still eat it so we did, in fajitas with onions and peppers, yum.) 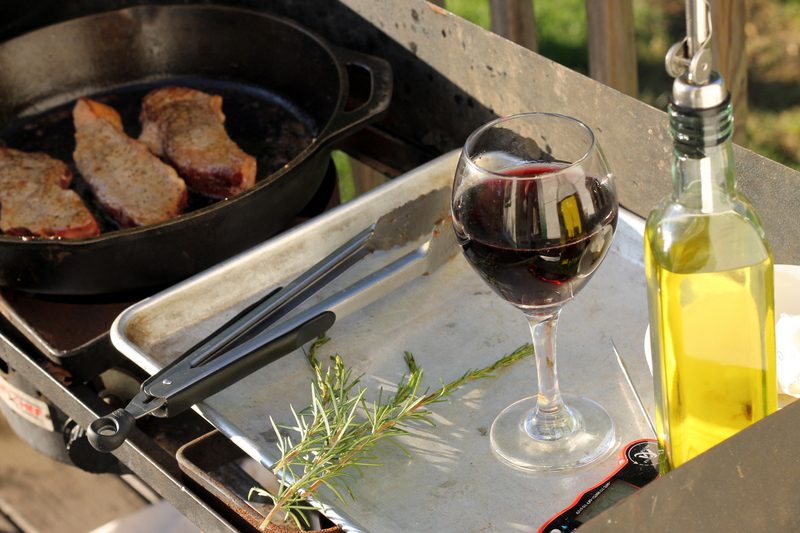 Then this past weekend, we cooked up a couple porterhouse steaks and three New York Strip steaks. (I had wanted to try ribeye and strip, to compare the difference, but my husband didn’t listen to my instructions, oh well.) So far—all two times—we cook our steaks on the outdoor cookstove, on the deck, because cooking steak is a frightfully messy business! By the time I’m done, the deck is speckled with grease droplets. 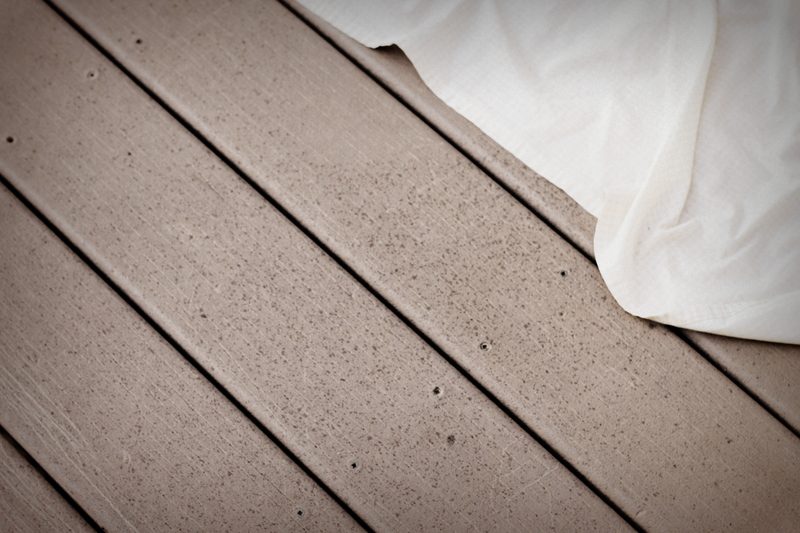 And we even put an old sheet down to try to catch the mess. Guess we need a bigger old sheet next time….

Here’s what I want to know: How in the world do all those fancy, white-aproned chefs in the videos manage to cook their steaks without getting grease everywhere and setting off the fire alarm? I do not understand. 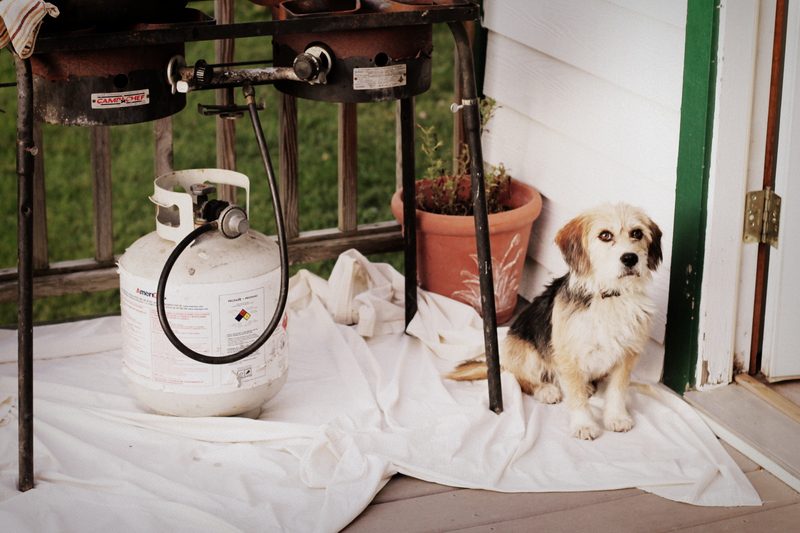 That evening, the kids were home (all but my younger daughter), and they all—every single one of them—went bananas. 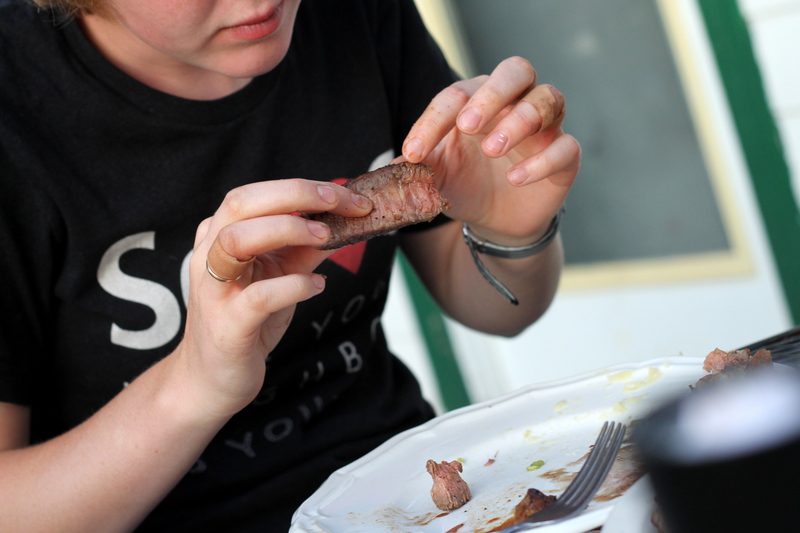 My older daughter cut the porterhouse steaks off the bone, and they all picked through the piles of steak searching for the rarest—bloodiest—morsels. My younger son adulterated his steak with store-bought BBQ sauce, but the rest of us doused ours with the red wine and butter sauce I’d made from the pan drippings. 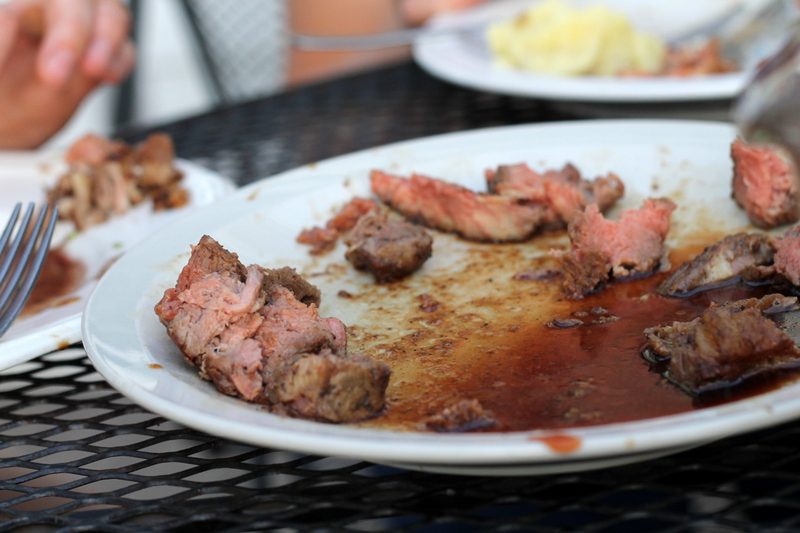 I was looking forward to leftovers so we could have steak and eggs some morning, but no such luck. I guess if I want leftovers, I’ll need to cook up some more steaks.

Which is fine with me, really. 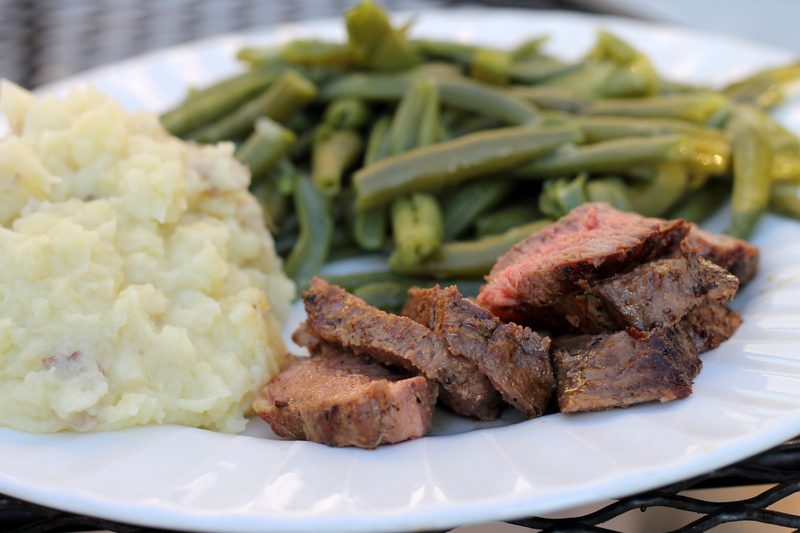 And everyone else, apparently.

*Get steaks that are 1¼ to 1½ inches thick. (I think ours are a little on the thin side.) So far, sirloin steaks are my favorite.
*If the meat has a good cap of fat, leave it on. You can remove it after cooking.
*Make sure the steak is at room temperature before cooking.
*Until you know what you’re doing, cook one steak at a time.
*Helpful tools: long-handled tongs, a stopwatch, a meat thermometer.

And hey, I am still a newbie at this steak-cooking business, so if you have tips, please share. I’m planning to try them on the grill next….

For the steaks:
steak, at room temperature
salt and pepper
butter and olive oil
fresh rosemary or thyme, several sprigs
a couple cloves of garlic, peeled and halved
1 large glass of red wine

Liberally salt and pepper the steak on both sides.

Place the skillet over a medium-high flame. When hot, drizzle in some olive oil. Add the steak. Start the stopwatch.

To make sure the steak cooks evenly from both sides, flip every minute. After a couple flips, sear the sides of the steaks, holding the meat upright with a pair of tongs.

About half way through the cooking time, begin seasoning the meat: After each turn, brush the top with butter, rub it lightly with garlic, and brush it with the fresh herbs that you’ve just swished through the hot oil.

For medium-rare steaks, cook for about 8 minutes or until the meat reaches 145 degrees. Place the steak on a plate and tent with foil.

Repeat the process until all the steaks have been cooked.

For the red wine and butter sauce (optional), add a little fresh oil to the pan, mince the garlic and toss it in. Add the sprigs of whatever herb you were using. After a minute, dump in a glass of red wine. Cook for a couple more minutes until the wine is reduced by half. Whisk in 3-4 tablespoons of butter. Strain the sauce.

After the steaks have rested for 5-10 minutes (or however long it takes to finish cooking all the steaks), slice them at a 45 degree angle across the grain and arrange on a plate. Pour over any meaty juices that have collected in the bottom of the “resting” plate. Serve with buttery mashed potatoes and the red wine and butter sauce.