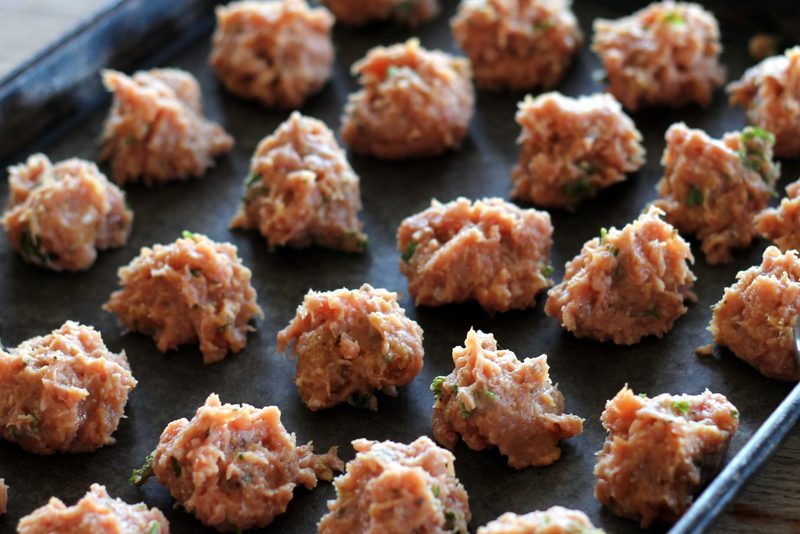 I’ve been battling a wicked virus. The main symptoms are a cough, exhaustion, and a lost voice. Or an almost lost voice, rather. My talker sounds like a mix between a frog, a purring cat, and a bag pipes (but without the tootling). I’m on Day Ten of nastiness and while I’m functioning well enough, I still have no desire (and possibly no ability) to go running, or even for a vigorous walk.

When my affliction first struck, I bent over backwards taking care of myself: lots of fluids, sleep, cough drops, rest, vitamins, and more sleep. But when the illness drug on, I despaired. I would never get better, it was clear. I would be sick for the rest of my life. So I quit babying myself and slipped into an apathetic stupor. There was lots of heavy sighing followed by violent coughing fits.

Then several days ago I decided I simply had to buck up and kick this thing. I decided to make a killer cure-all soup and eat it round the clock.

I knew exactly which soup I wanted: Italian Wedding Soup. When we traveled to Chattanooga for Thanksgiving, my sister-in-law served us this soup the first night we arrived. She couldn’t have chosen a better post-travel supper. After being stuck in a stale car and subsisting on crunchy carbs and fast food for an entire day, the spinach-packed broth with turkey meatballs was just the fortification I craved. Along with the soup, she served bread, and there was small pasta to add to the soup, but I skipped both in favor of a second bowl of the brothy lusciousness. 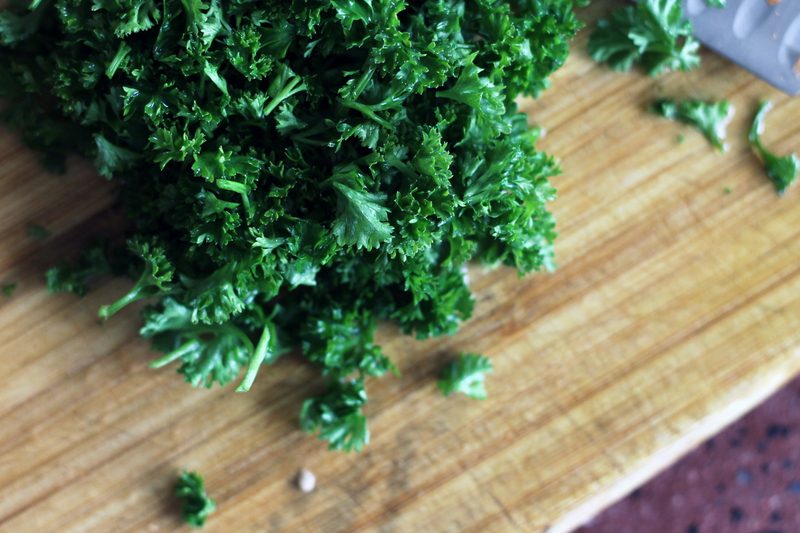 Back home, I bought all the soup ingredients straight off, so earlier this week when I decided it was that soup I needed, I was prepared. I made a double batch. It was so amazingly perfect. Light, protein-packed turkey meatballs, rich, flavorful turkey broth, mountains of silky soft veggies… 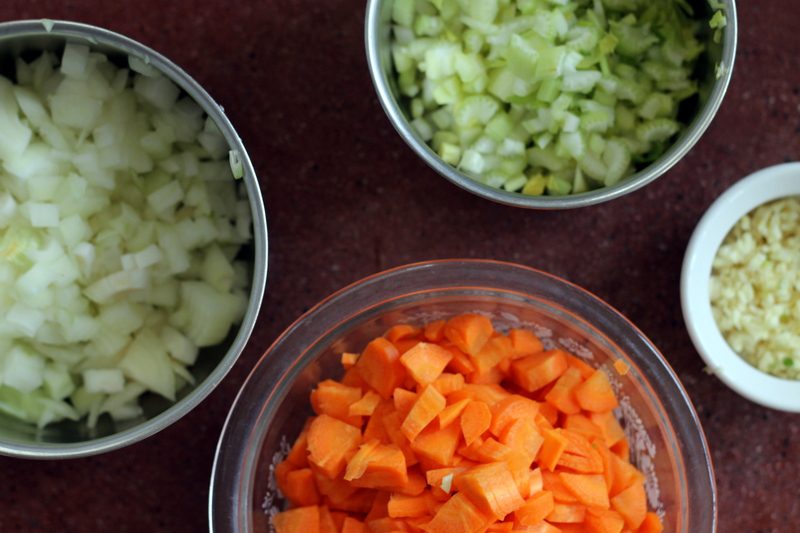 We ate it for supper that night, then I had it for lunch the next day, and then I served it for supper again the next night (at which point I called it Deja Vu Soup). And then it was gone. What a bummer.

But guess what? I am better now! Not all better, but notably so. I’m crediting the soup. 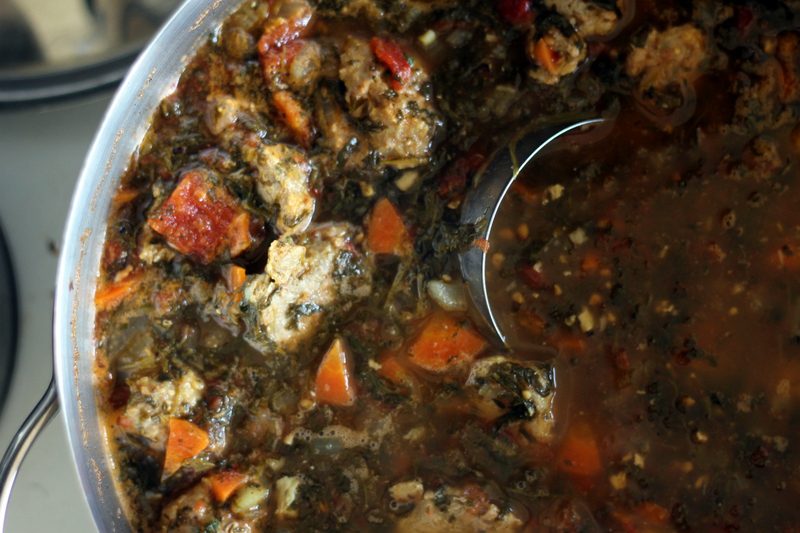 PS. Along with being a great soup for sickies and the perfect meal to end a long day of car travel, this soup is also a fabulous antidote to All The December Sugar. Serve it pre- (or post-) sugar bomb party and you’ll feel practically virtuous, even if you do end up eating a dozen cookies yourself.

PPS. I went on a run/walk this morning! (I wrote this post yesterday.) It felt amazing, even with the wheezing. 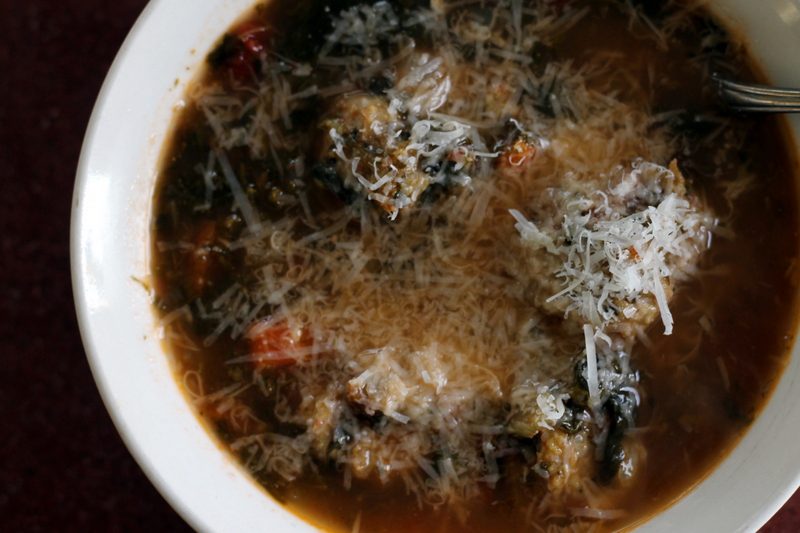 Italian Wedding Soup
My sister-in-law adapted her recipe from the one found on Good Life Eats Blog, and I, in turn, adapted mine from both of theirs.

I recommend using the full amount of broth, and possibly more, especially if you have a rich, homemade stock on hand. I started my soup with less stock, but added another quart during one of the reheats. Towards the end, when we were down to just veggies and meatballs, I was kicking myself for not adding even more stock.

The raw meatballs are rather sticky. I ended up dolloping them onto the baking tray, à la cookie dough, instead of actually rolling the meat into balls.

Considering the fact that ’tis the season for car travel, illness, and sugar, might I kindly suggest that you make a quadruple batch? I suspect it freezes well, though I wouldn’t know for sure, seeing as we wasted no time slurping it into oblivion.

Combine all ingredients. Shape into small balls, or dollop them as though they were cookie dough, and place a sided baking sheet. Bake at 350 degrees for about 15 minutes until no longer pink inside. Add to soup, or, if saving for later, place in a container and freeze or refrigerate.