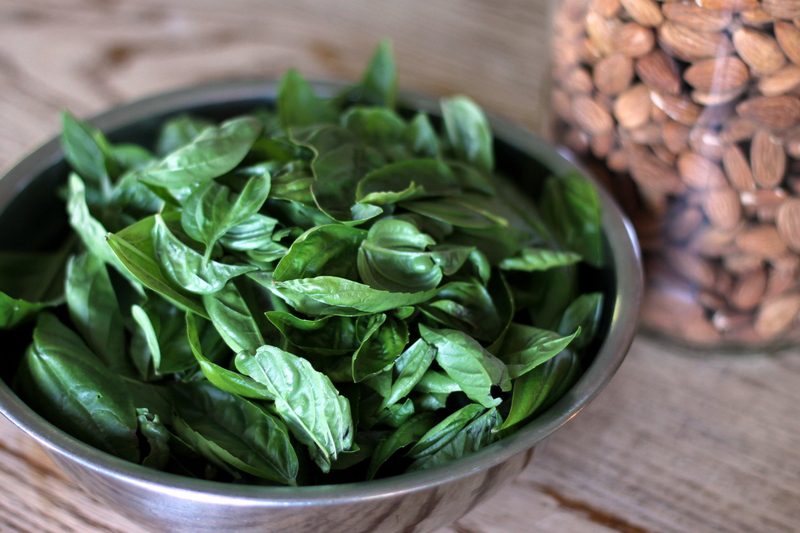 I discovered this recipe, years ago, while browsing the cookbooks in Barnes and Noble. I jotted it down in the little brown notebook (right after chocolate peanut butter truffles and before zucchini fritters) that I used for B&N recipe filching, and then went home and made it. The recipe was a smash hit: everyone in my family loved it, and at least three of my friends now make it most every summer.

Problem is, I never posted the recipe here. Maybe I was feeling lazy, or swamped with summer produce—who knows—but I did something I never ever do which was to include the recipe in my recipe index with a link to the post that my friend did about it. In other words, I first filched the recipe and then I filched my friend’s post about the recipe. Not good. 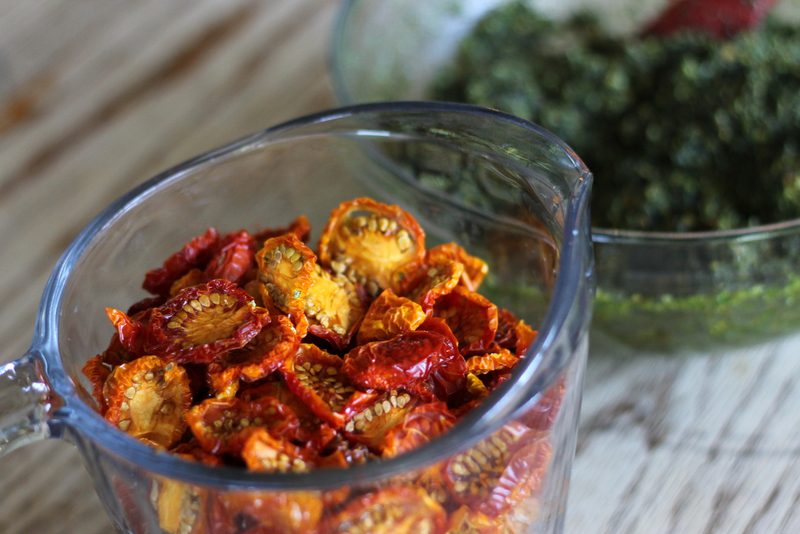 But all that is about to be made right! I am posting the recipe here, on my blog, today. (Although I used my friend’s post to make the dip that I photographed for this post. Moral: filching is a vicious cycle.) 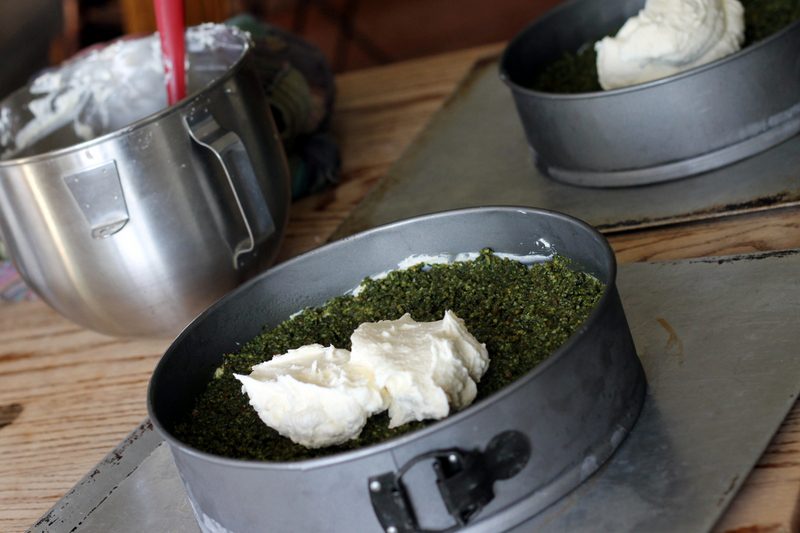 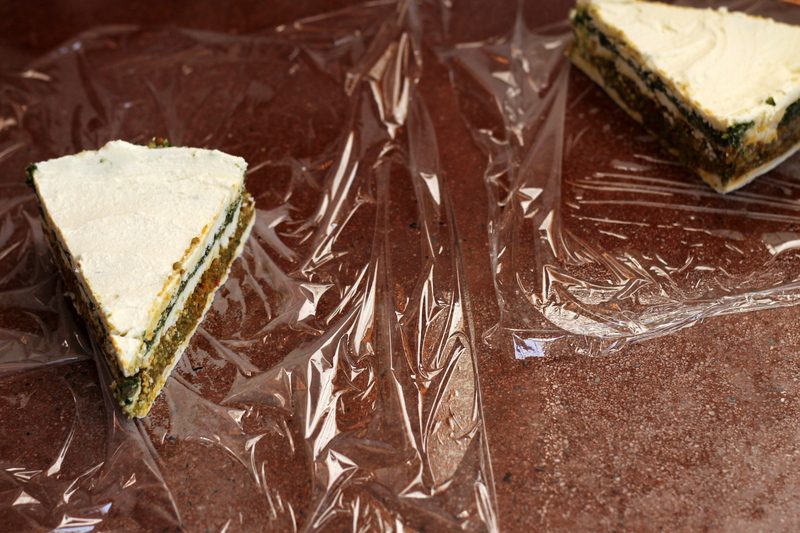 But it is a kitchen event, so here’s what I suggest. Assemble your ingredients, pick a day when you’ll be home for the better part, and then make a double batch. If you’re going to go to all this trouble, you might as well make it worth your while, right? You will get two enormous pans of frozen dip that you will cut into wedges like pie, resulting in many slices of dip. Each of those slices will be individually wrapped and then stored in the freezer. 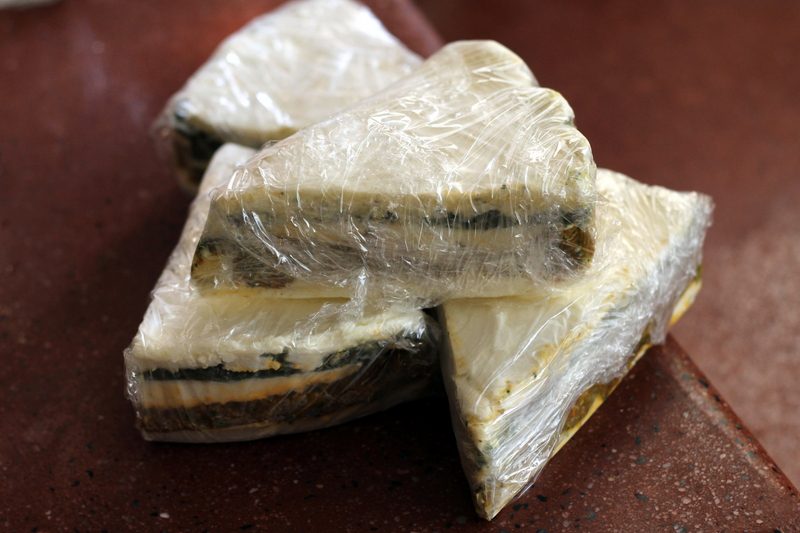 This means you will have a year’s worth of killer—killer—dip on hand for any occasion: potlucks, New Year’s Eve parties, company dinners, lazy Sunday suppers, etc. Pull one of these wedges of pesto torte out of the freezer, set it on a plate and mound crackers around it, and people will think you are the bee’s knees. And they will be right, of course, because you made a pesto torte. 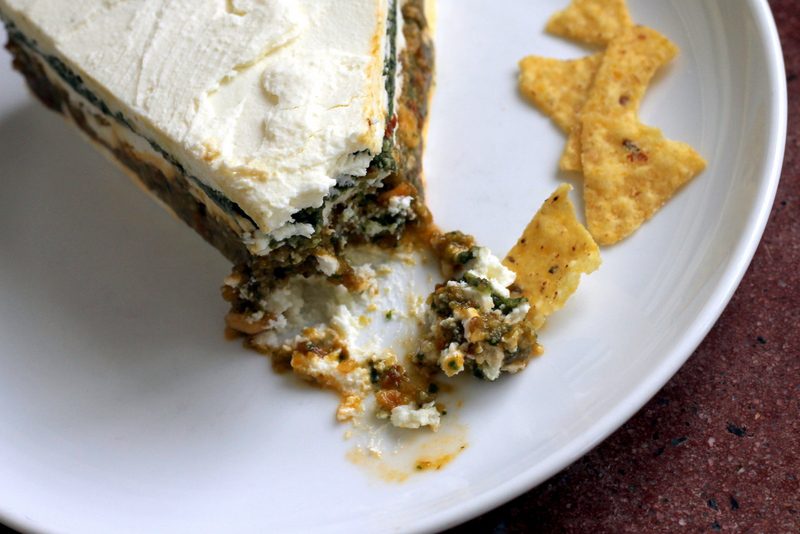 I just ran downstairs and dug my little brown notebook out of my three-ring recipe binder. The original filched recipe has all sorts of notes and is somewhat different from the recipe that my friend posted and the one I just made. The following recipe is a combination of my notes, my friend’s version, and some adaptations based on my recent torte-making experience.

Use any kind of almonds: slivered, toasted, or raw. Other nuts—like pine nuts (but they’re so expensive), walnuts, or pumpkin seeds—would probably be fine. Feel free to use Romano in place of the Parmesan, if you like. I use my own oven-roasted tomatoes.

You’ll need a food processor for this recipe. If you don’t have one, borrow or buy.

What follows is a single batch so you can see the recipe in all its simplicity. But don’t make just one batch. Please, you gotta double it. Trust me on this.

Beat together until creamy. Set aside.

Combine all ingredients, except for the olive oil, in the food processor and pulse until combined. While the motor is running, slowly add the oil through the spout. Transfer the pesto to a bowl, cover with plastic, and set aside. Return the food processor bowl to the base without washing it.

Process the almonds and half of the tomatoes (because adding all the tomatoes at once can overwhelm the processor’s motor). Add the remaining tomatoes, garlic, cheese, and salt and process until fairly smooth. Add the basil pesto and combine. With the motor still running, slowly add a cup of oil through the spout. If the tomatoes were very dry, you will need to add the remaining third cup of oil, but if they were juicier, then you might not need all the oil. The pesto should be creamy and smooth, not dry or runny.

for the assembly:
Line a 10-inch springform pan with plastic wrap or spray it with cooking oil. (That said, I kind of think the torte won’t stick to the pan if you skip that step. I did, however, line the bottom of my pan with wax paper since the bottom of my pan is getting a little rusty-ish.) Set it on a cookie sheet to catch any oily drips.

Spread 1/3 of the cream cheese mixture over the bottom of the pan. Slip the pan into the freezer for thirty minutes.

Spread the tomato mixture over the cream cheese base. Go all the way out to the edges. Slip the pan into the freezer for 60-90 minutes. This layer doesn’t freeze as quickly, and if it’s not frozen solid, it will smear up the next white layer (see my photos).

Spread the second third of the cream cheese layer over the tomato layer. Freeze for 45 minutes.

Spread the basil pesto mixture over the cream cheese. This is a thinner layer. Freeze for 1 hour.

Spread the remaining cream cheese mixture over the top. (I dirty iced the torte with just half of the mixture, froze it for 30 minutes, and then used the last bit to finish off the torte, all pretty-like.) Cover the torte and return to the freezer for a good hour.

Once the torte is frozen solid, remove it from the freezer. Remove the sides of the springform pan, and transfer the torte from the bottom pan to a cutting board. Slice the torte into the desired number of pieces, tightly wrap each piece in plastic, and slip the pieces into a plastic bag. Freeze.

To serve: unwrap one piece of frozen torte and set it on a plate to thaw. Serve with crackers, chips, toasts, pretzels, or whatever crunchy-munchies you have on hand.