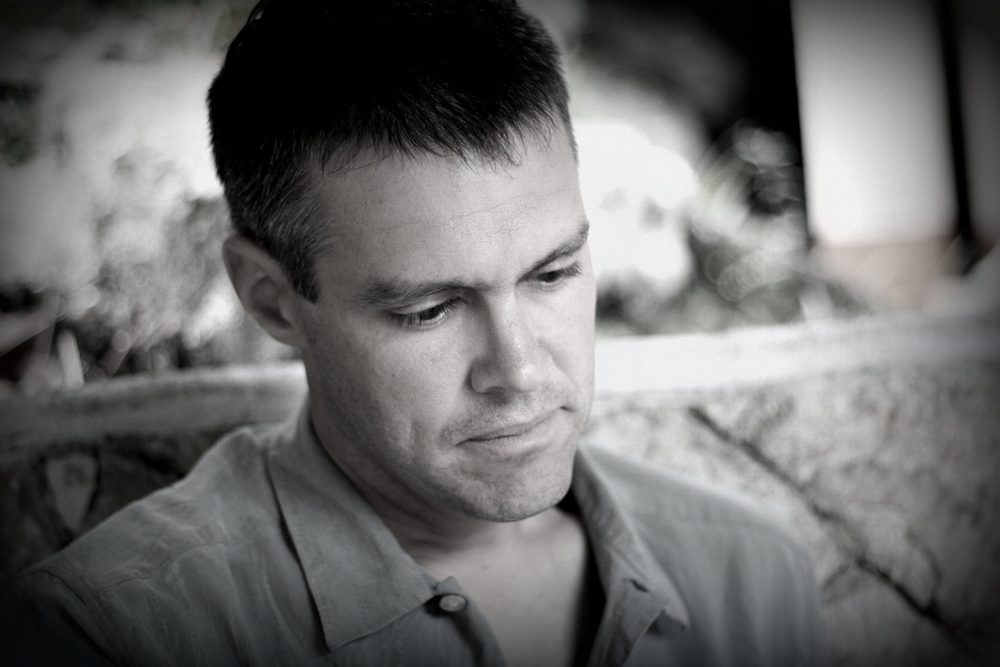 Part One: The Sunday Kitchen

On Sunday afternoon, I drug my husband into the kitchen and made him cook with me. I love to cook, but sometimes I just want another body in the kitchen. Someone who will do all the mindless jobs, like peeling apples, cubing bread, washing dishes, and scrubbing potatoes, so I can focus all my energy on being a kitchen goddess.

My husband wasn’t too thrilled with the wrench I threw into his relaxing Sunday afternoon. But I called him my hermoso moso (handsome grunt worker) (which sounds so much better in Spanish than in English) (though no one ever uses that term in Spanish that I know of) and alternated between sulking and sweet talking until he eventually found himself standing in the kitchen while I buzzed around him and muttered incantations to myself.

lost in a book, the hermoso moso

In the course of two hours we:

*scrubbed, boiled, and peeled the potatoes
*baked an apple pie, zucchini cake, and banana bread
*made a batch of chocolate cookies and baked one tray of them
*snapped and cooked the green beans
*made tuna salad
*cubed stale bread for a future baked French toast
*cut up peppers, cucumbers, and carrots for the supper’s veggie platter
*washed several mountains of dishes 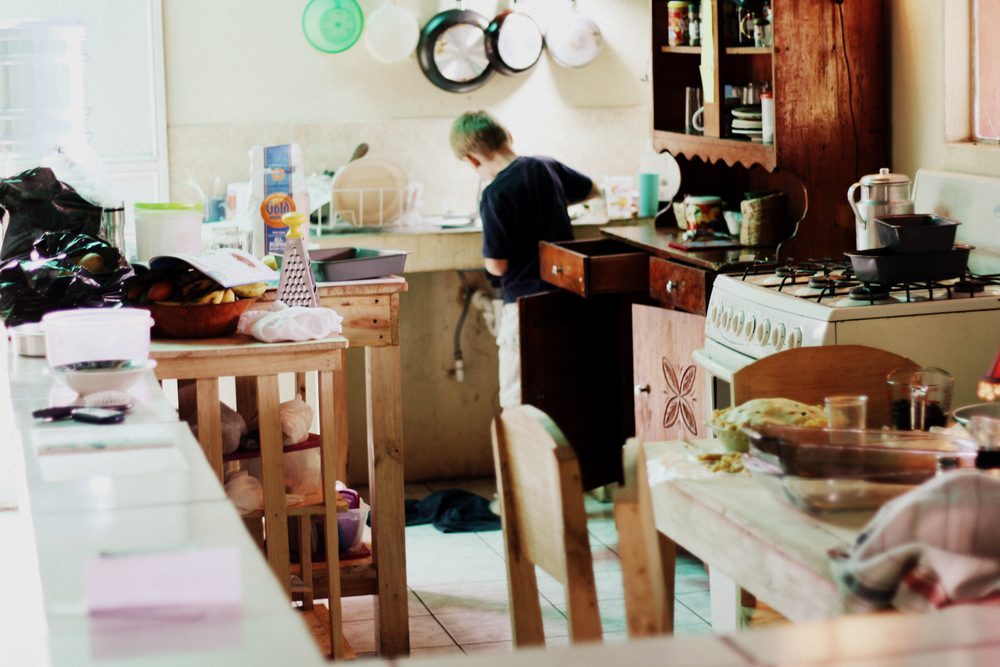 wrong day (and minus the little boy), but similar mess

I love being bossy and I love cooking and I love my husband. My Sunday afternoon could not have been any more perfect.

Except then I made everyone watch the first half of Napoleon Dynamite with me and I laughed like a hyena the whole way through. So I guess it did get better after all.

Part Two (which has nothing to do with part one): The Soup

I have a new favorite soup. It’s actually more just a mess of stewed greens than a soup, but I still call it a soup anyway. 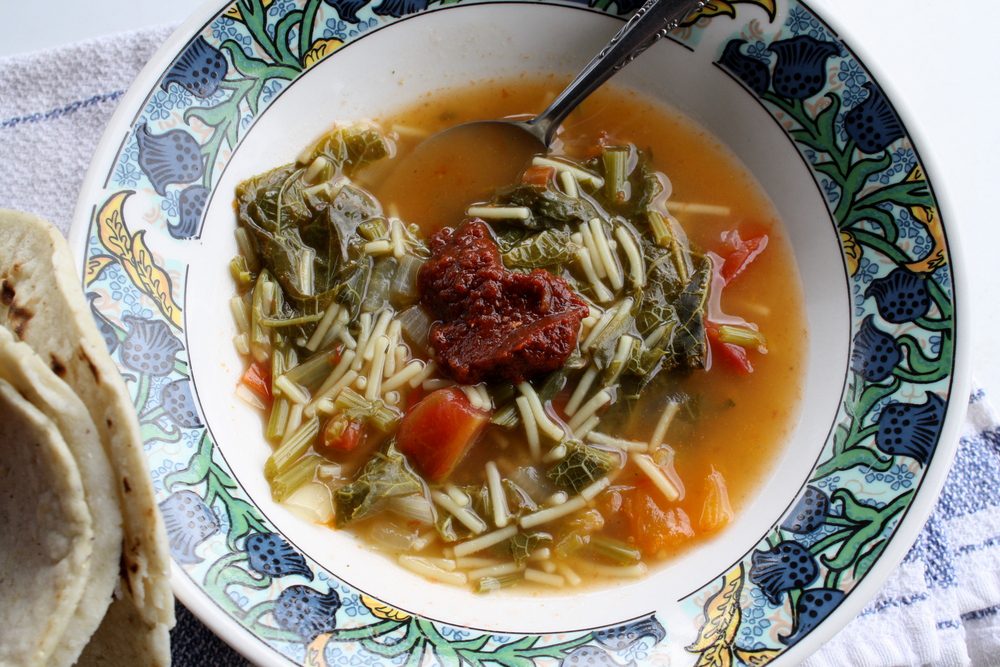 I’m the only one in my family who eats it. Which is fine with me. I like to keep a container of it on hand for quick lunches or for my portion of a supper of leftovers—

Oh pooh, I’ll just go ahead and tell you the truth (not that any of the above wasn’t true).

You know how everyone goes on and on about traveling to another country and getting knocked flat with diarrhea?

Well, not me. I have the opposite problem. As in, diarrhea? Ha, I wish.

Why do I tell you this? Consider it a public service announcement. Y’all need to know the truth about travel: it’s not all skitters, folks.

So anyway, this soup (along with the prunes, bowls of fresh pineapple, mangoes, and plates of raw veggies—none of which actually work which leads me to believe that it’s my low-fat, low-dairy diet that’s the problem. Not only do I love and miss my butter and cheese, I neeeeeeeed my butter and cheese!) is one more method to combat my … problems.

(Is this foreshadowing? Am I going to be that wizened old lady who carries a jar of mucilage—silage, Metamucil, whatever—with her wherever she goes, including into restaurants and other people’s houses, and then spends the better part of dessert discussing her bowels? Oh dear.) 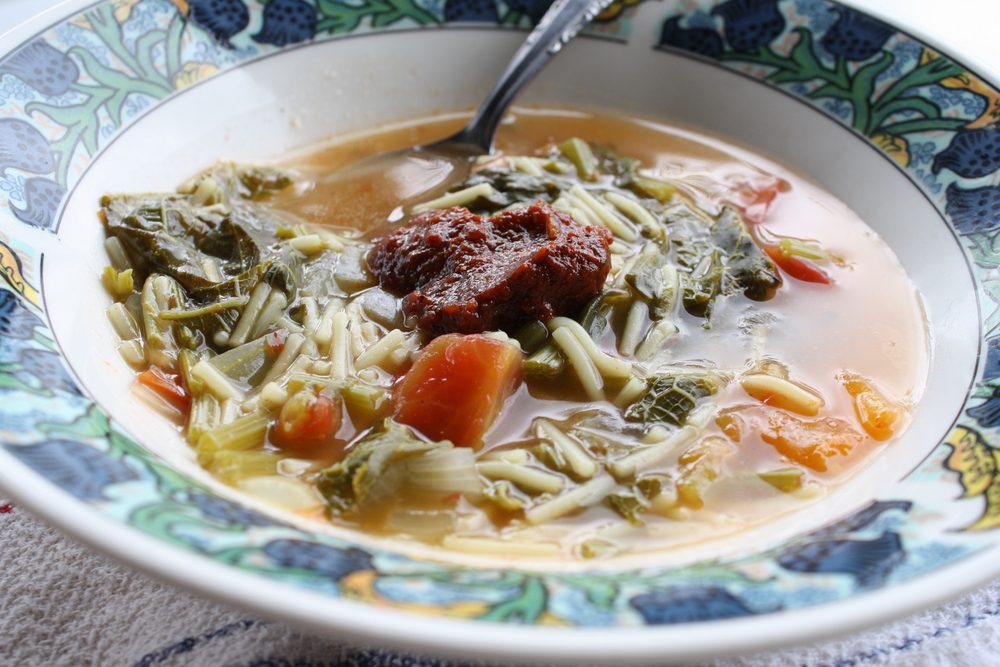 I have no idea if the soup is helping (nothing seems to), but it’s light, satisfying, nutritious, and knock-me-over delicious. So really, whether or not it is helpful doesn’t play into the picture any more. I eat it because it’s good, that’s all.

PS. I once had a friend point out that I have a knack for writing about topics that don’t mix well. For, example, mice and Christmas cookies. And here I am doing it again. I’ve decided that this is, um, a talent, and so I commit to henceforth and hereafter honoring and cultivating it for the benefit of my adored readers. You’re welcome.

PPS. Oh! I just remembered a picture I have of a friend of mine, who was visiting me in Nicaragua, eating pureed prunes straight from the baby food jar. See? It’s not just me! 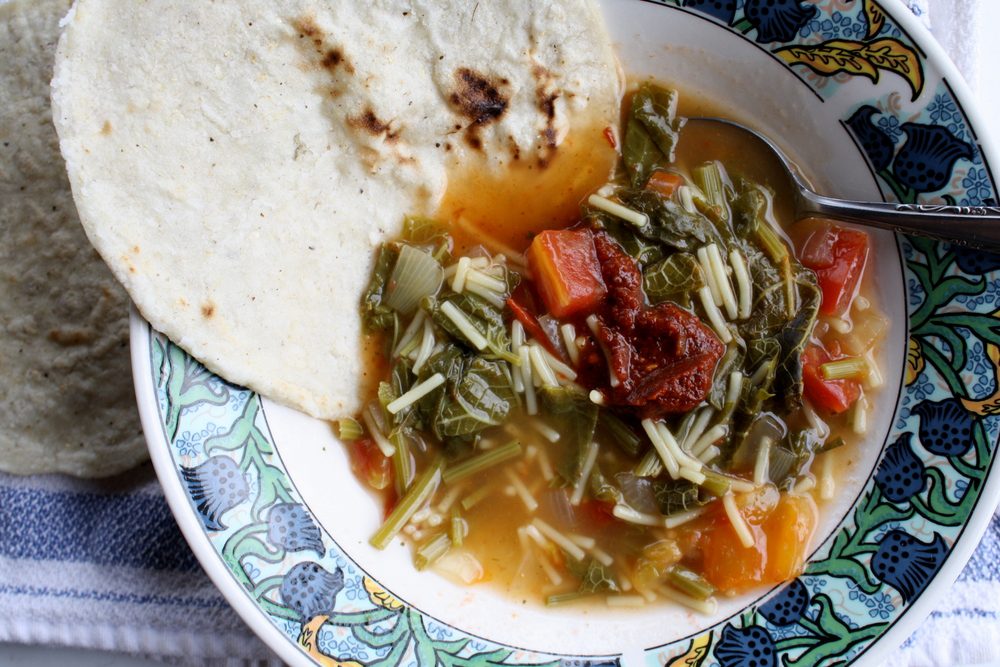 Stewed Greens with Tomato and Chili

Here, I use squash leaves and stems, but any tough-ish sort of green will do. The chili sauce is an integral part of the soup. I made a homemade chili (still tweaking the recipe), but you can use sriracha or picámas or cayenne powder—whatever you have. In any case, your nose should tingle. And the soup really, really should be served with thick corn tortillas, too.

I’ve been using Sopa Maggi as my soup base. Sopa Maggi is pretty much just chicken bouillon with little noodles in it. Back home, I’d use chicken broth (and I prefer the soup without the noodles), so that’s what I’m noting in the recipe.

Toss the veggies into a soup pot and pour in the chicken broth or water and bouillon. Bring to a boil and then lower the heat and simmer, lidded, for 20-30 minutes. Taste to correct seasonings. To serve, ladle the soup into bowls, top with chili sauce, and pass warm corn tortillas.