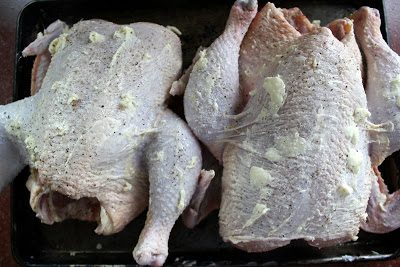 But then I roasted two chickens the most basic way possible and the meat was so good that I nearly ate half a chicken during the de-boning process. When my oldest daughter came into the chicken, I mean kitchen—kitchen!—she took one look at the pile of bones and set to wailing, “But I wanted to eat a whole chicken for supper!” Because chicken tastes better when it looks like chicken, obviously. 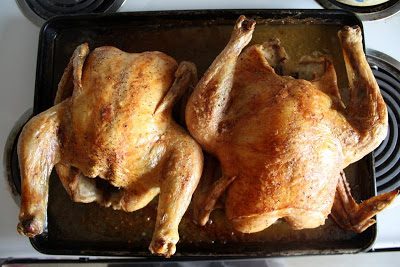 Simple Roast Chicken
With inspiration from The Best Way To Roast a Turkey, by Aimee of Simple Bites

Rinse the chicken and place on a roasting pan—in other words, a pan with sides. Smear dabs of butter all over the outside of the chicken and inside the cavity. I’m serious here. You want to grease that baby up good.

Salt and pepper the chicken inside and out. You’ll probably use at least a teaspoon of salt and a half teaspoon of black pepper, but it depends on the size of your bird.

Roast the chicken at 400 degrees for 20 minutes before reducing the temperature to 350 degrees and roasting for another hour or so. Not that I know anything about times, though. The way I check for doneness is by look (is it dark golden brown all over?) and leg flexibility (does the leg move easily when wiggled back and forth?). If the answer to both questions is yes, then it’s done. Or else you can just roast it to death. That works, too.

Allow it to rest, covered with foil, at room temperature for 15-30 minutes before devouring.

P.S. I wanted to title this post “Put a bird on it,” but it didn’t exactly fit, so I refrained. But it’s how I refer to this post…in my head.