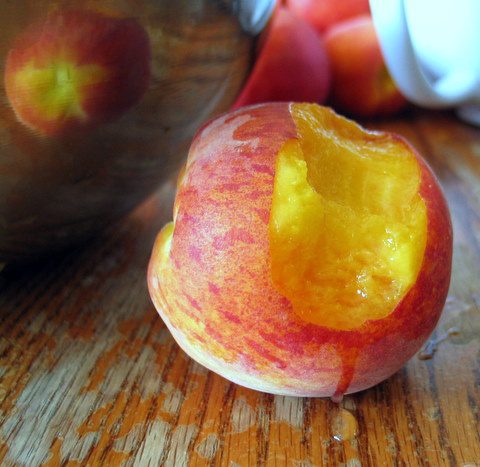 I need to clarify something: my father didn’t hang up the phone on me. He did, however, laugh politely, and they didn’t come down any sooner than planned. But! But, but, but!

When they did arrive (exactly when they said they would), Mr. Handsome and I were flying around with our heads chopped off, attempting to cook all the corn before we had to leave for our meeting in town. When we did leave, the homestead looked like a tornado had passed through—supper halfway made, tubs of cooling ears of corn, and kids, clothes, and toys everywhere. By the time we came home, the dishes were washed, the bags of corn were chilling in the fridge, the kids were bathed, the tent was up, and they had drug the rocking chairs off the porch and were all sitting around a smokey campfire roasting marshmallows for s’mores and reading stories. (The remaining clean-up was a piece of cake with the children out from underfoot and happily entertained.) My parents slept in the tent with all the kids, and Mr. Handsome and I had the house to ourselves.

The following morning, Mom and Dad had a meeting (the real reason they came up), but when they returned my mom kept pointing out that the three bushels of peaches I had acquired from a local farm the morning before were ripe and needed to be done now. I was in the middles of canning my sweet pickles and brushed her off, telling her that I would start on them as soon as I could. That answer wasn’t good enough apparently, because soon my mom and dad had settled in to washing and peeling, and then my Tiny Little Brother, back in town for a friend’s wedding, showed up and pitched in. 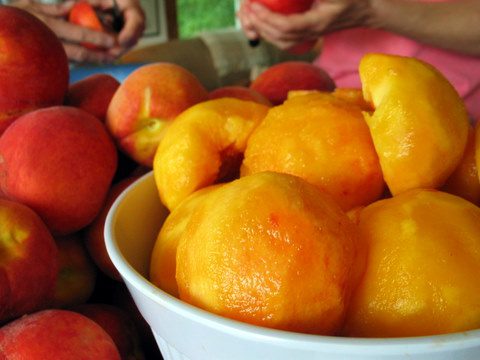 As soon as I finished with the pickles, I started slicing the peaches and packing them into jars. Their three-thirty projected departure time came and went and they were still sitting around the table with juice dripping off their elbows. Dad noted the floor was getting sticky so he washed it. Mom noted that The Baby Nickel was getting nixy, so she told him a story (while talking, she slowed down on the peaches a little because she had to wave her arms about and point my plastic coffee stir-stick at The Baby Nickel’s ears for illustration purposes). When they left, I still had my work cut out for me, but I was much, much, much farther ahead—like eight hours ahead—in the peach-canning game. 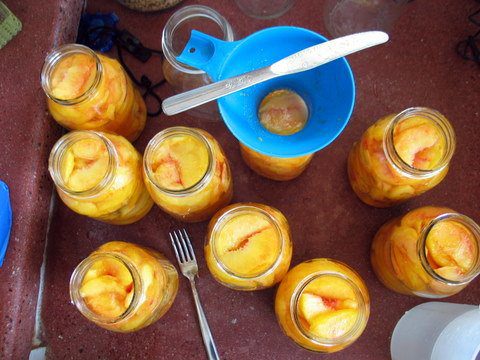 So see, there you have the whole truth. My parents don’t do exactly what I suggest they do—they do more, bless their gizzards! (That’s not a typo—we talk thataway.)

How To Can Peaches
I use Red Haven peaches because they are easy to pit and, when cut and exposed to air, they don’t brown as quickly as other peaches.

Wash the peaches, cut them in half, remove the pits, and peel them. At this point you can slither the halves into the clean quart jars, or you can first cut the halves into slices. I prefer to can peach slices for two reasons: first, they are easier to serve—simply scoop out some sliced peaches onto your bowl of cereal and eat—no extra prep work necessary; and second, you can fit more peaches in a jar and cut down on your time spent slaving over a hot canner.

Once the jars are full of peaches—while packing the jars, shake them every now and then to help the peaches settle and then use a fork to pack them down in even more—add the sugar. I think it is standard to add anywhere from 1/3 to ½ cup of sugar per quart jar, but I add a scant 1/3 cup to mine and think it plenty sweet. (Also, I started adding the sugar when my jars were three-quarters full of peaches because I sometimes had trouble with the sugar spilling over the edges when I added the water at the very end.)

Slowly add water to the jars, using a table knife to press the peaches to one side to create a space for the water to trickle down and to ferret out any pockets of air that are lurking in the bottom of the jars. Continue to fill the jars with water till it comes up to the bottom of the screw markings on the neck of the jar, or about ½ inch from the top.

Wet your fingers in a cereal bowl filled with clean water and swipe them over the lip of the jars till there are no longer any traces of stickiness. Put clean lids on top, followed by the rings, screwed tight. (Dirty little secret: I reuse my canning lids. I know, I know, totally taboo. But I check them good, making sure the seal is unmarred, and I wash them before using. I’ve used some lids as many as five times over!)

Process the jars of peaches in a hot water bath. Your canning manual will tell you to process the life out of them, probably to do something crazy like keep them at a rolling boil for twenty-five minutes, and my aunt Valerie will tell you they are done when you lift one of the jars out of the canner and see that the fruit has moved toward to the top, creating ½ inch or so of juice at the bottom—this happens after only about five minutes of boiling. I settle somewhere in the middle (after that peach canning fiasco) between the anal canners and my aunt Val, usually letting the jars boil for about fifteen minutes or so.

When the jars are totally cooled, remove the jar rings, wash the jars in warm soapy water to get rid of any remaining sweet peach goo (if you don’t, that invisible goo will mold and then it will become visible), label the jar lids (I scrawl a simple ‘09), and move them to storage. Wash the rings, stack them in a pretty pyramid and let them air dry before shipping them back to their storage box.

As for the jars that didn’t seal (out of our 46 quarts of peaches, three didn’t seal), store them in the fridge and eat them up over the course of the next couple weeks (or days).

About One Year Ago: Smashing Potatoes.