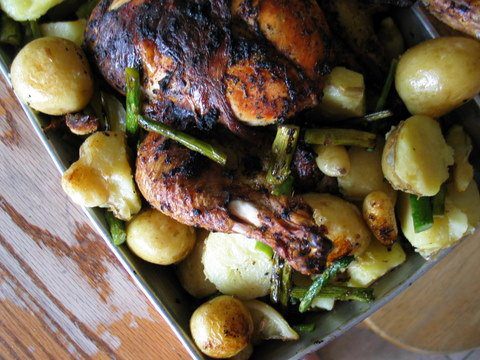 I love this. The kids love this. As for Mr. Handsome, well, this is what he said. 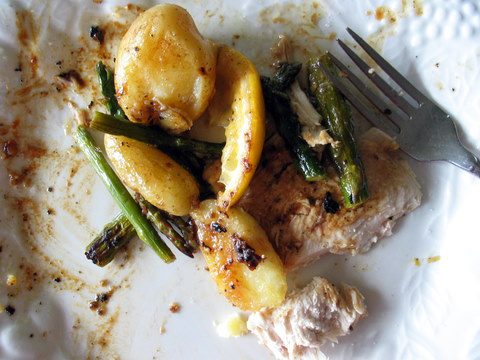 First, he said, with reflective tentativeness, “Wow.” Next, he added a bold, “Mmm.” And then he really let fly the culinary praise when he asked, almost peevishly, “Why doesn’t chicken always taste like this?” 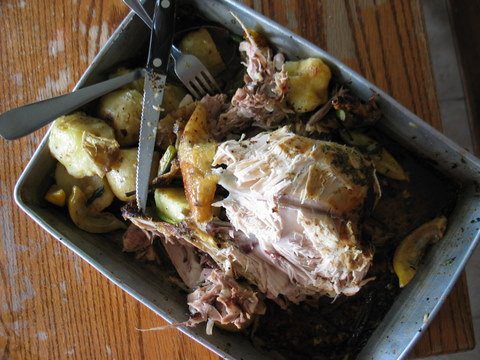 So, there you have it. We’re sold.

Oregano, Garlic, and Lemon Roast Chicken with Potatoes and Asparagus
Adapted from Aimee’s blog Under the High Chair

I didn’t measure my potatoes or asparagus. I used the last bit of asparagus that was hiding in the crisper, and ran out to the garden to dig up a couple potato plants—I was shocked to discover giant, fist-sized potatoes this early in the season.

The asparagus roasts up kind of soft, I think because of all the lemon juice. I thought I wouldn’t like it (since I don’t like baked asparagus—tastes too slimy for me), but it was great, the texture melded perfectly with the potatoes and chicken.

There did not seem to be many juices left in the roasting pan when I pulled the roasted chicken from the oven, but after letting the chicken rest for a few minutes and then after piling the veggies up around it, the juices oozed out, seemingly from nowhere. If you want a juicier chicken yet, you can add a cup of chicken broth to the pan the last fifteen minutes of roasting.

I’m going to be making the pesto-like rub and freezing it in little containers so we can eat this roast chicken year-round.

For the “pesto” rub:
In the canister of a food process, combine the following: the zest and juice from two lemons, four cloves of peeled garlic, and the fresh oregano. Process until the mixture resembles a nubbly pesto. Add the 2 tablespoons olive oil, the tablespoon of salt, and the teaspoon of pepper and process till well-blended. Set aside (you may freeze it at this point, if you wish).

For the chicken:
Put the chicken in a roasting pan. Rub the garlic mixture all over the chicken: stuff it under the skin, right up against the meat, inside the chicken’s cavity, and all over the outside of the chicken. Bake the chicken, uncovered at 350 degrees for 1 ½ – 2 hours, or until done. (I check for doneness by wiggling one of the legs—if it moves easily, it’s done.) Remove the chicken from the oven, cover it with foil and allow it to rest for 15-20 minutes.

For the vegetables:
While the chicken is roasting, prepare the vegetables. Wash the potatoes, but do not peel them. If they are not uniform in size, cut the large potatoes into chunks the size of the smaller potatoes. Put the potatoes in a pan and cover them with water. Bring the potatoes to a boil and then simmer them until they are half-cooked (about ten minutes). Drain them and then put them in a large bowl.

Cut the third lemon into six wedges and add them to the potatoes along with the prepared asparagus and the last six cloves of garlic. Generously douse the vegetables with olive oil and sprinkle them with plenty of coarse sea salt and some black pepper. Toss to coat. Spread the veggies out on a large baking sheet.

Once the chicken has finished roasting, turn the oven up to 450 degrees and slip the baking pan of vegetables into the oven. Bake them, stirring once or twice, for 10-15 minutes, or until the potatoes are fork-tender and the vegetables are beginning to caramelize.

To serve:
Mound the vegetables up around the roast chicken and serve. 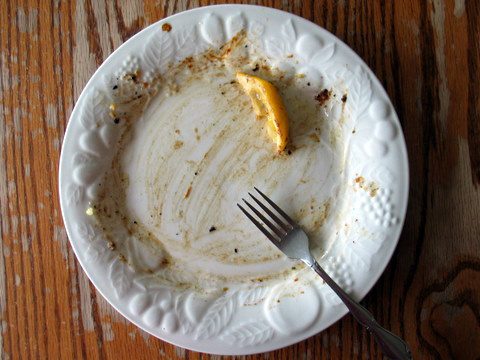 About one year ago: Lemon Donut Muffins