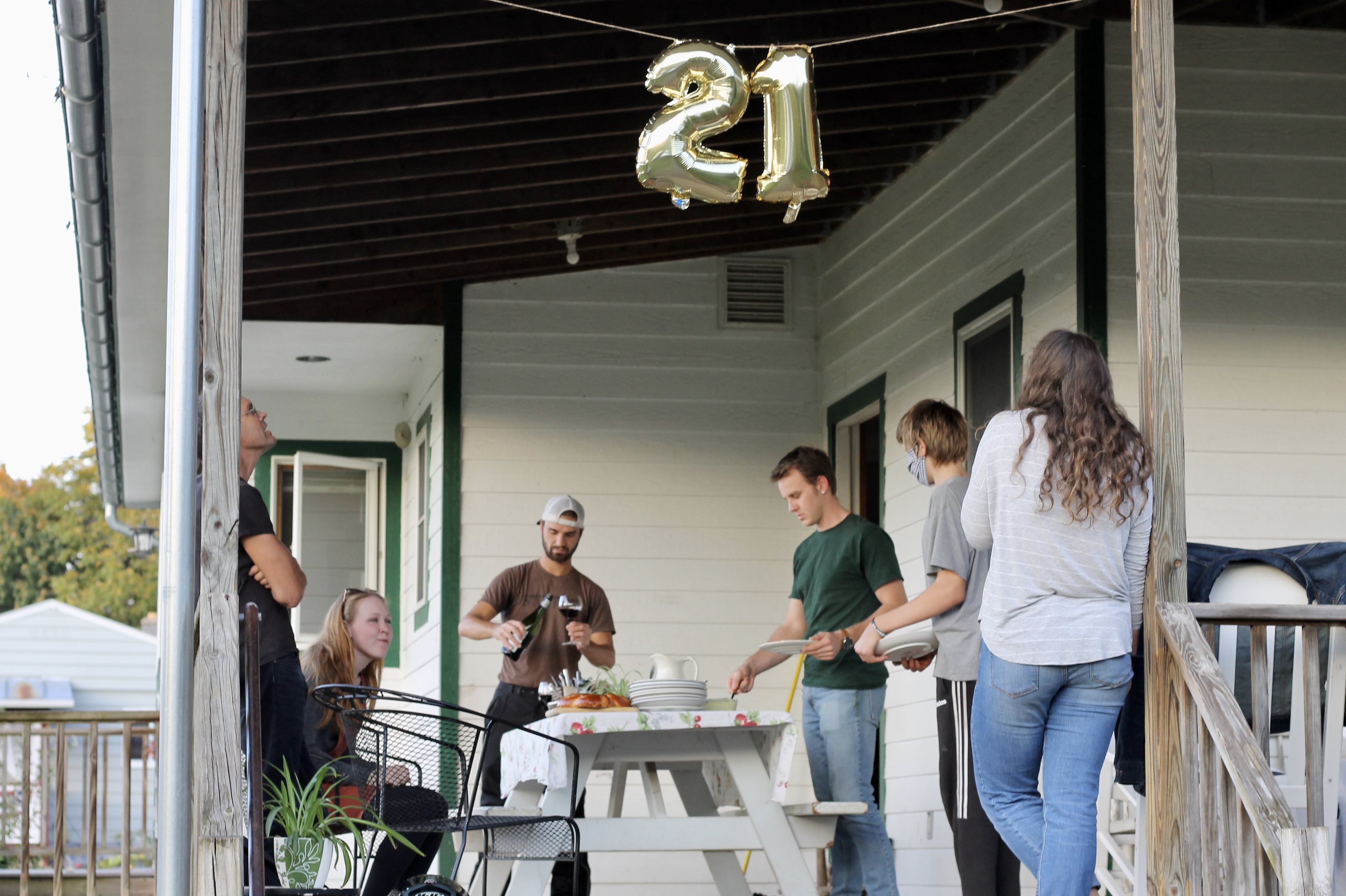 About six weeks before my son’s 21st birthday, his housemates rang me up. We don’t know what you’re planning, but we have some ideas, they said. One wanted to make a family favorite — tuxedo cake — and the other had just ordered some fancy wine from South Africa and wanted to break out a bottle (oo-la-la!).

But we need a red meat to go with it, he said. Do you have any steak left over from your steers?

Sure thing, I said, happy to share the party prep. And I’ll make the sides, too. 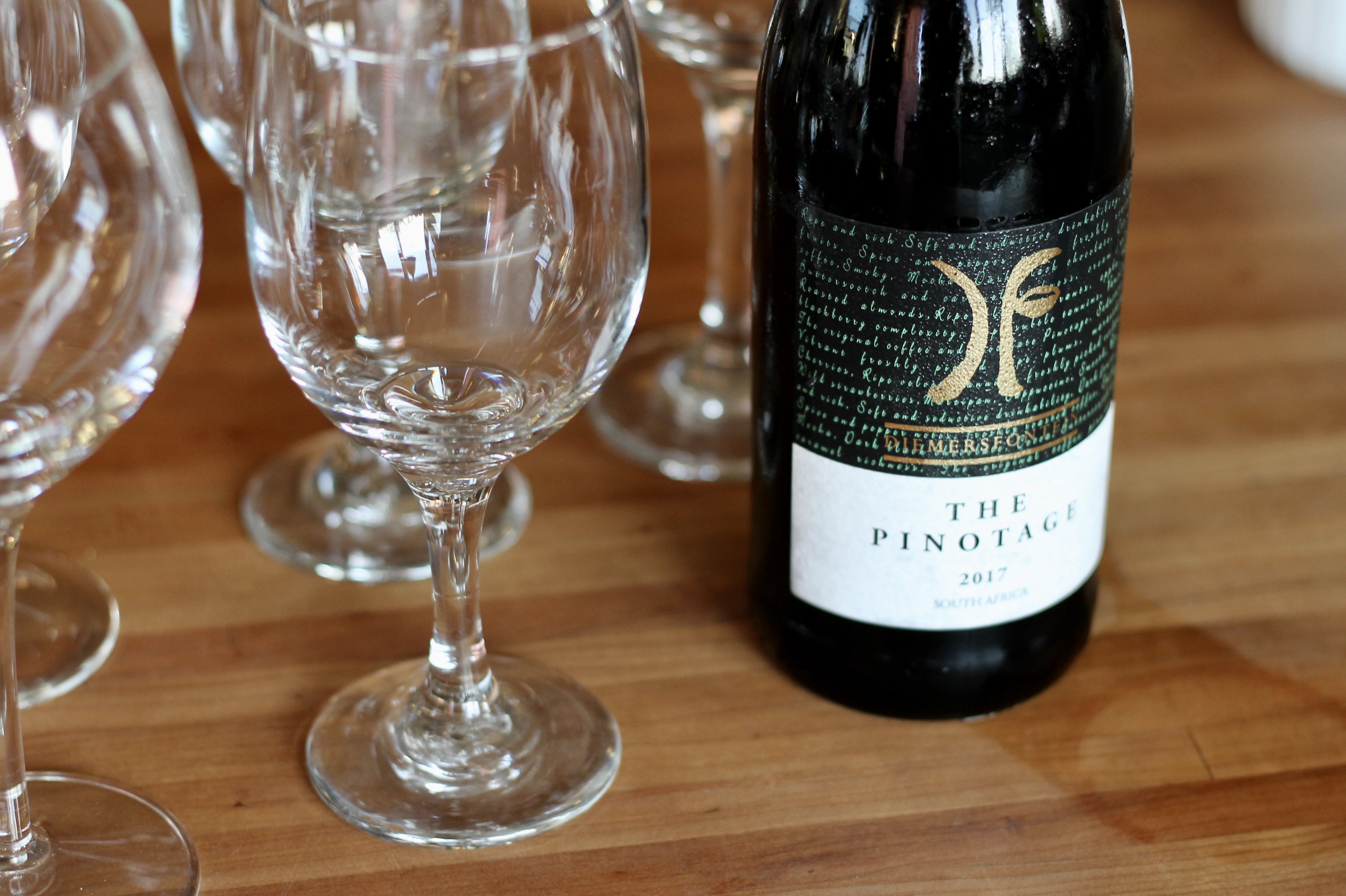 But then a week before the birthday, I ran down cellar to check the beef supply and — no steak!

I did have a brisket, though, and a few weeks before I’d seen a recipe in the NYTimes for a braised sweet-and-sour brisket that looked promising. Problem was, when I’d gone back to the link to get the recipe, I could no longer access it. I’d checked with a few friends who I thought might have a fancier subscription than mine, but no luck. Apparently, the recipe was not to be mine, so I let it go.

But now with a birthday looming and no steak in the freezer, I circled back. Surely someone had to have access to the NYTimes recipes, right? But nope, not the news junky friends, not the hip bloggers, and not the local university library, humph.

Feeling mildly desperate, I suggested to my husband that we maybe ought to buy a fancy subscription?

No! he barked, alarmed. (I have been known to lay down good money for recipes.) So I started to think about other birthday supper options. Meatloaf, maybe? But somehow meatloaf just didn’t sound 21st birthday celebrationy enough.

Then, as a last Hail Mary, I put out an SOS on our church’s women’s Facebook page. And wouldn’t you know, within minutes — maybe even seconds? — someone messaged me a screen shot of the recipe followed by a PDF. I quick printed it out before the recipe disappeared again (one can never trust the internets entirely) and did a little happy dance. We’d have birthday brisket after all! 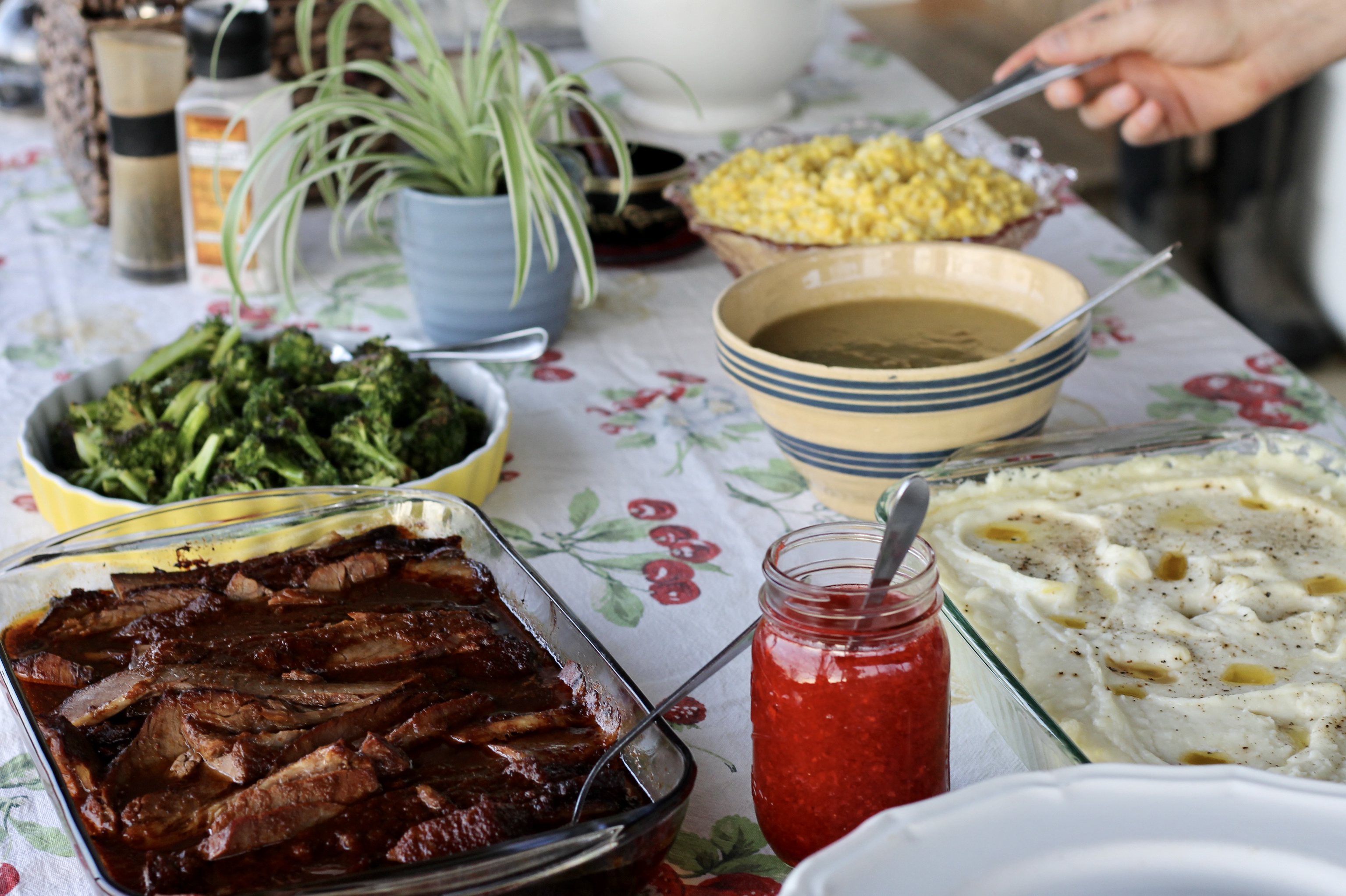 Turns out, the recipe was totally worth the search. It was easy to make — braise for six hours in a sauce, chill overnight, and then prior to serving, trim, slice, and reheat — and the final product, oh my. 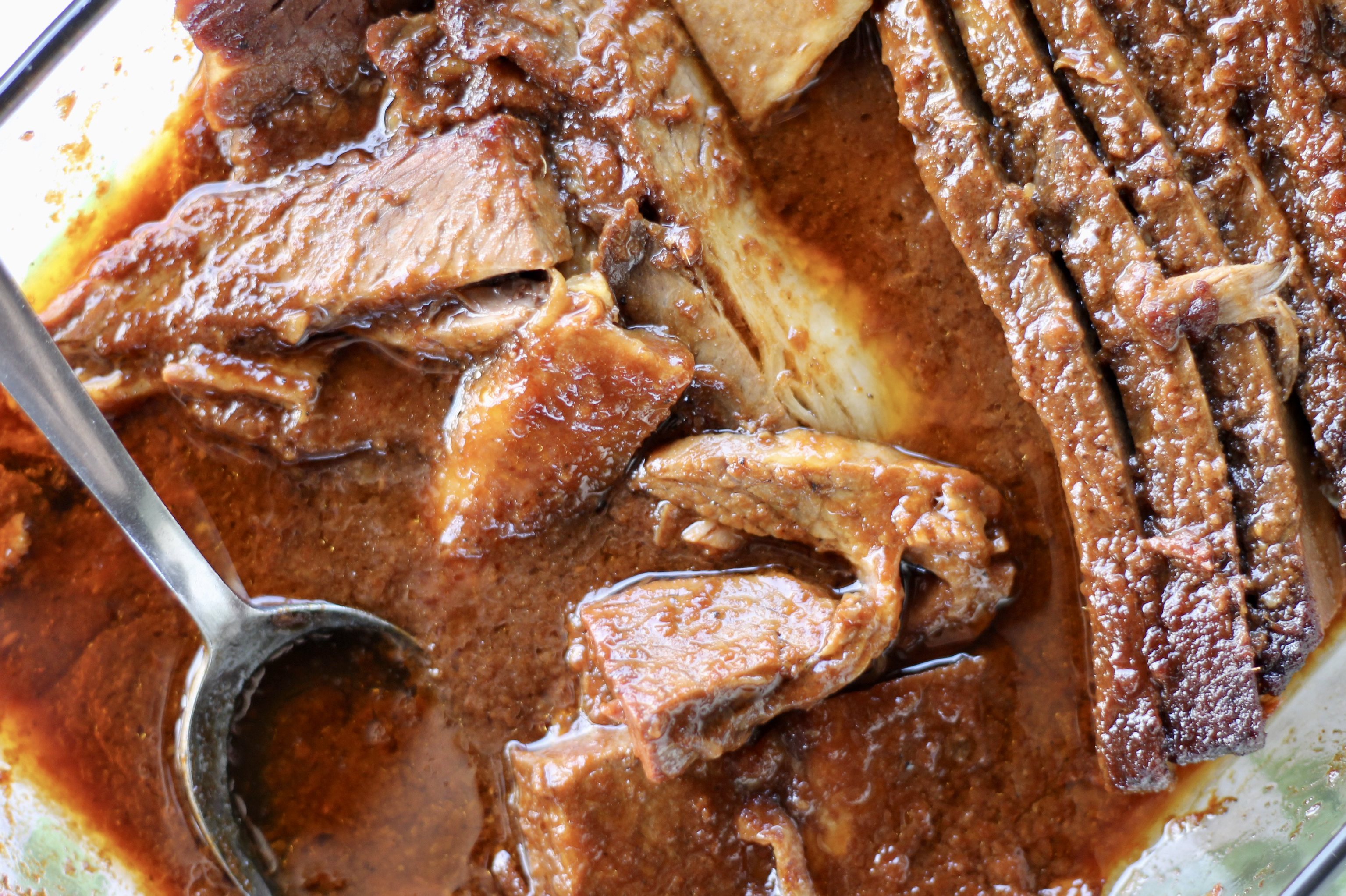 You should’ve heard the groans. Melt-in-your-mouth tender and so, so flavorful. It was swoony, stuff-your-belly-full good. Between the ten of us, we nearly ate the entire thing. 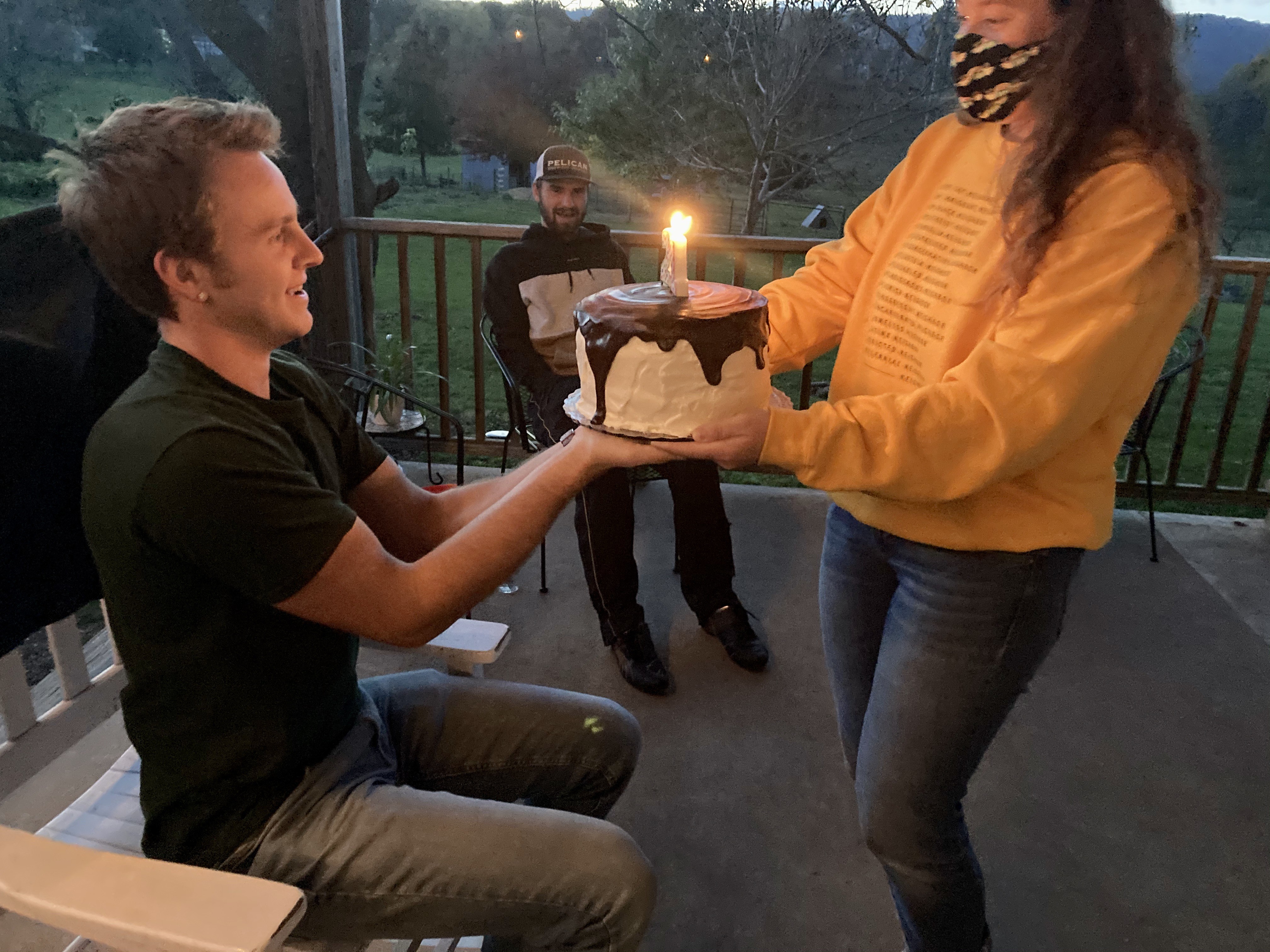 Happy birthday, kiddo. We love you!

Adapted from the New York Times.

If you have any left over, consider shredding the meat and tossing it, and the sauce, with pasta, a bit of pasta water, and loads of Parm for a quick, fancy-ish supper.

There’s no salt in the recipe, but — surprise, surprise — it didn’t really need any.

Let the meat stand at room temp for 30 minutes before baking.

Put everything but the Coke, olive oil, and meat in a blender and blend until smooth. Transfer to a bowl and whisk in the Coke and oil.

Remove the layer of chilled fat atop the sauce and discard (the fat, not the sauce!). Put the sauce in a kettle and heat. If it’s thin (mine wasn’t), reduce it a little. Pour the sauce over the meat, cover the pan with foil, and bake at 350 degrees for about 25 minutes, or until heated through and bubbly.