My husband, three younger kids, and I left home for DC in the dead of night, arriving just as the sky was beginning to lighten. As the sun rose over the Potomac, we gathered with the other marchers to listen to a recorded message to our group from Al Sharpton, a spoken word piece titled Mississippi The Microcosm from Genesis Be, and a message from the pastor of St John’s Episcopal Church. 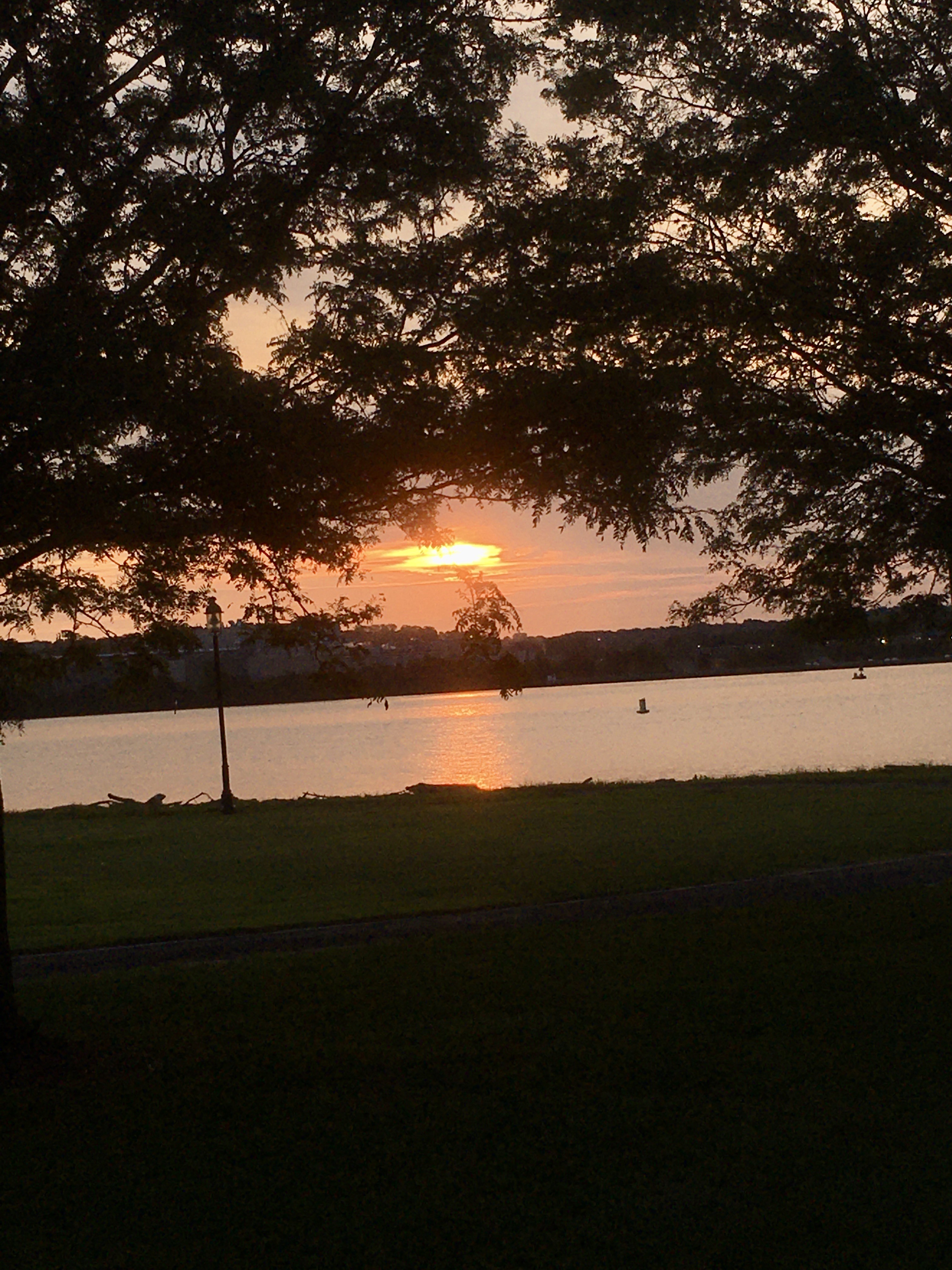 Then the group, now swelled to about a hundred, set off on the walking trail that would take us the eight miles into the city. 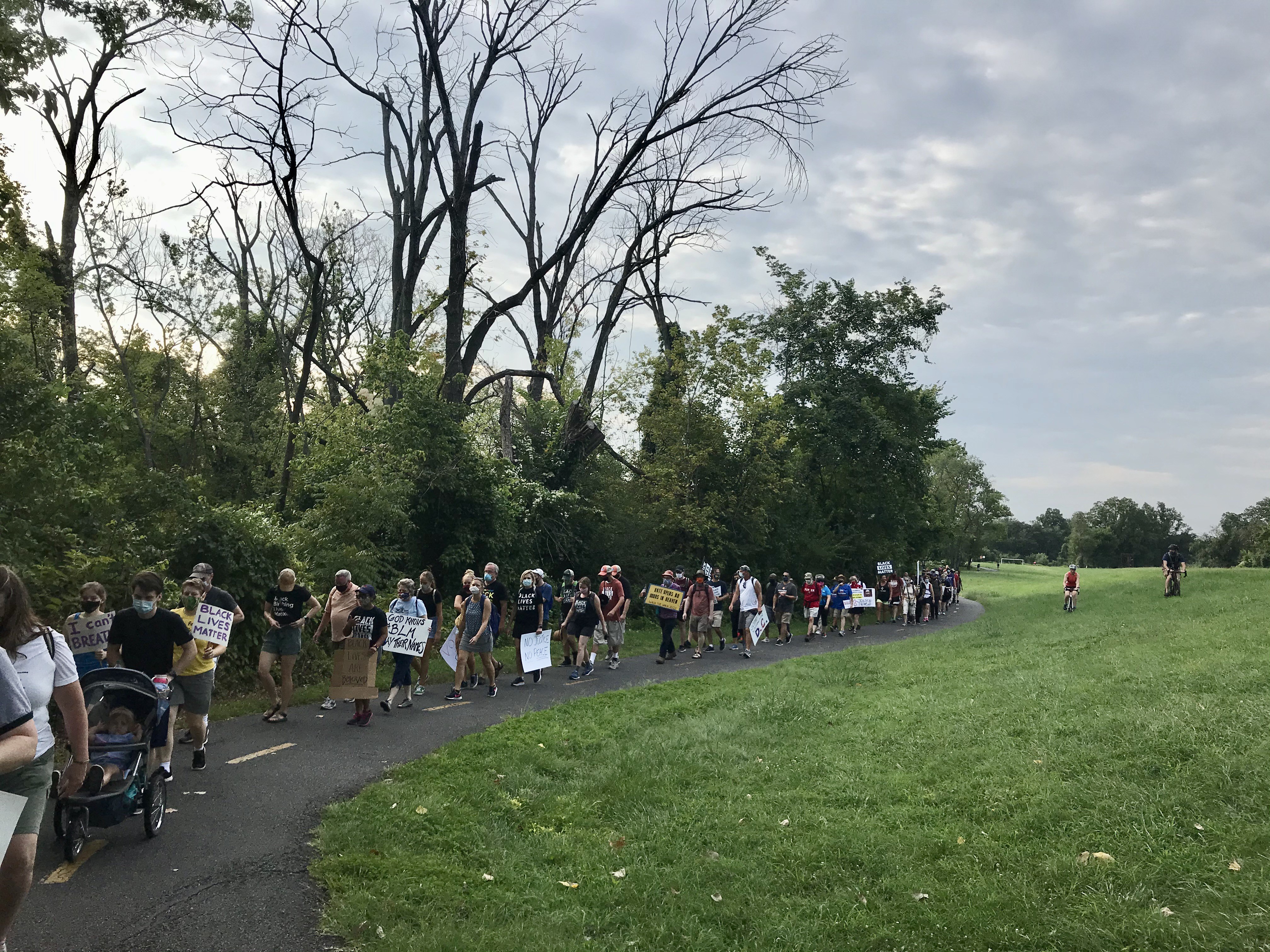 Once there, we went directly to Lafayette Park where we spent some time looking at all the wall of photos of Black victims of police violence on the fence along the perimeter. 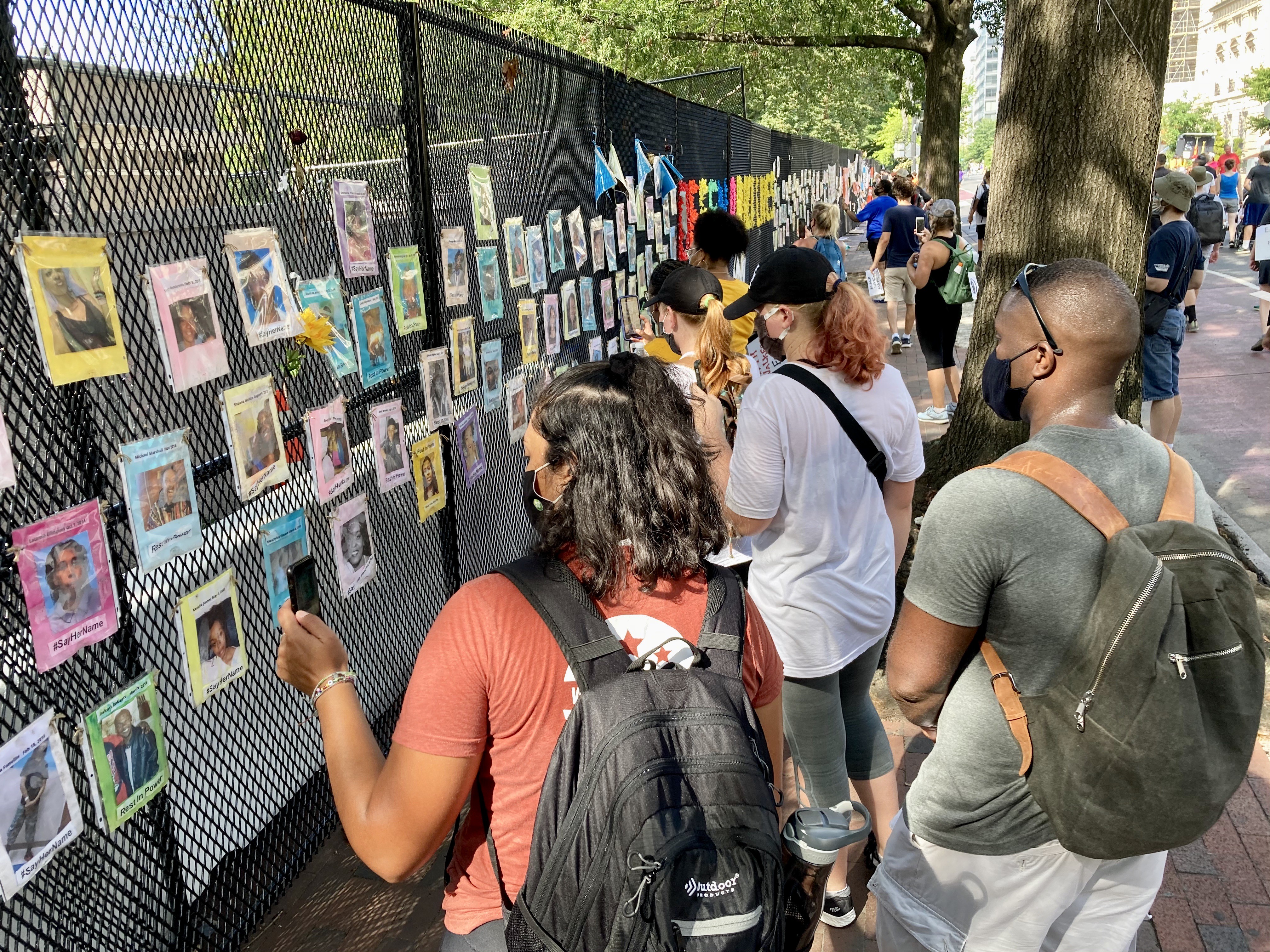 Our group had had a permit to gather in the park, but then it was revoked at the last minute so we gathered on the street instead, just a half block from St. John’s Episcopal Church, which was also closed to the public. Different church leaders spoke briefly, focusing specifically on Biblical texts about justice (of which there are no shortage). One pastor shared what had happened when she’d eagerly asked one of her staff, a black man, if he would like to join them on this march. 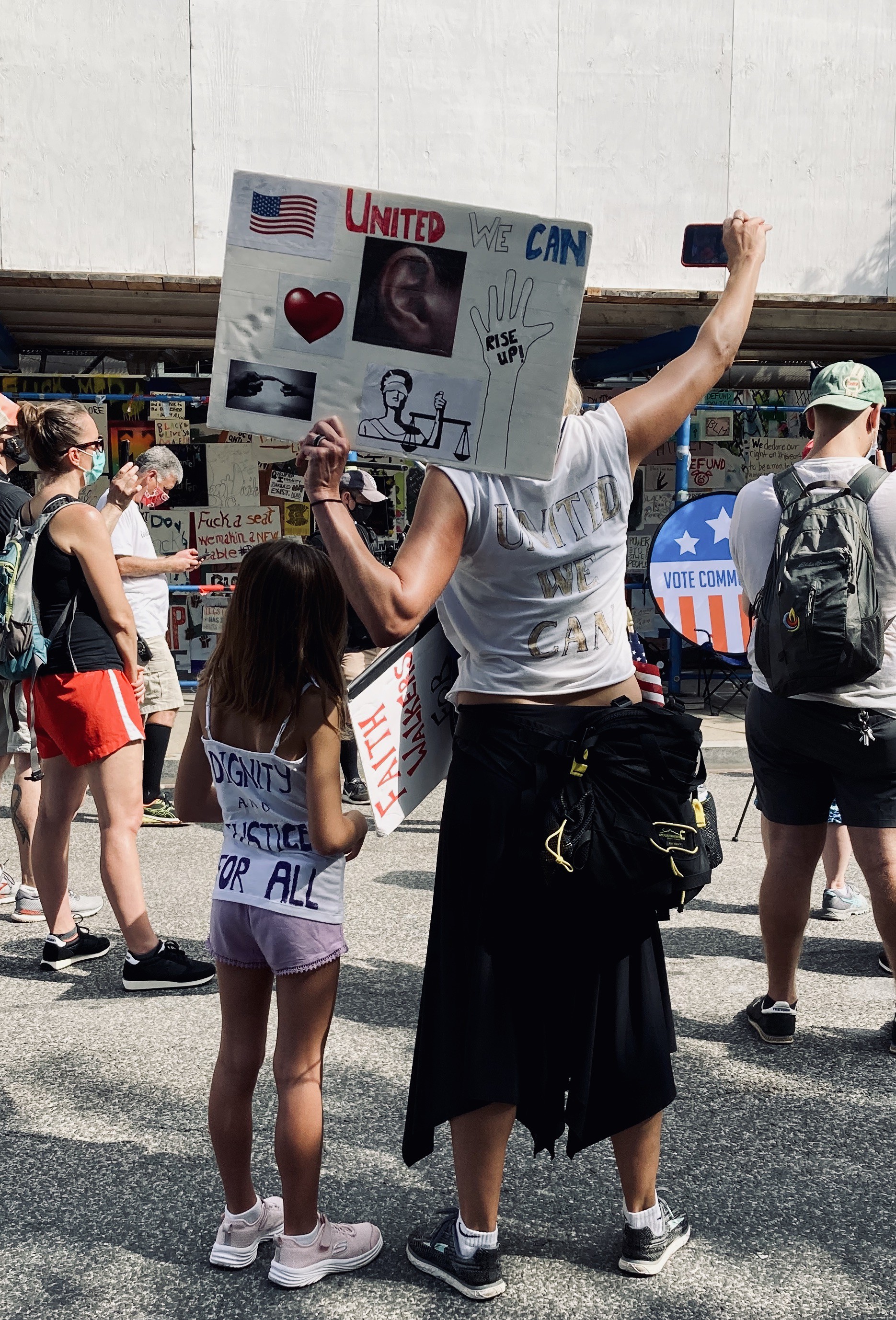 A singer-songwriter from South Bend, Indiana, Daniel Deitrich, sang a song he wrote to the church of his childhood: A Hymn for the 81% — the eighty-one percent being the number of evangelicals who voted for Trump. It was beautiful and raw and painful, and listening to it I cried. I’m so glad my younger daughter had the presence of mind to record it.

The Walk the Walk presentation over, we split from the group and headed to the Lincoln Memorial. My husband and I estimated the crowds were about 90% Black, which surprised me. I’d thought there’d be tons of whites present to show solidarity, so their absence made me second guess our choice to be there — were we overstepping? But then I spied this sign: 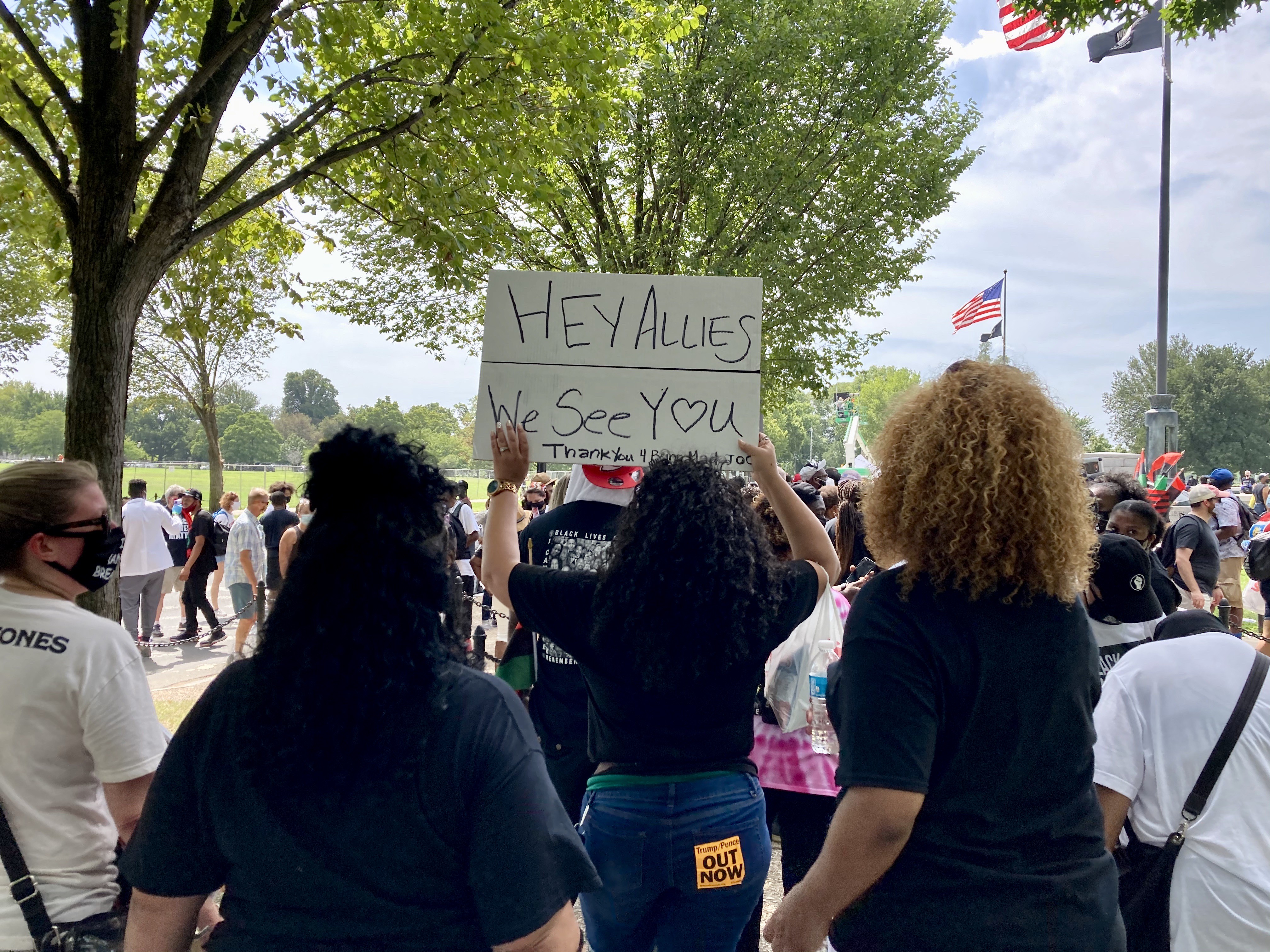 This wasn’t about us, and yes, we were welcome.

The grounds were packed — after months of physical distancing, the precense of so many people felt almost surreal! — so we sat on a little knoll edging the reflecting pool. 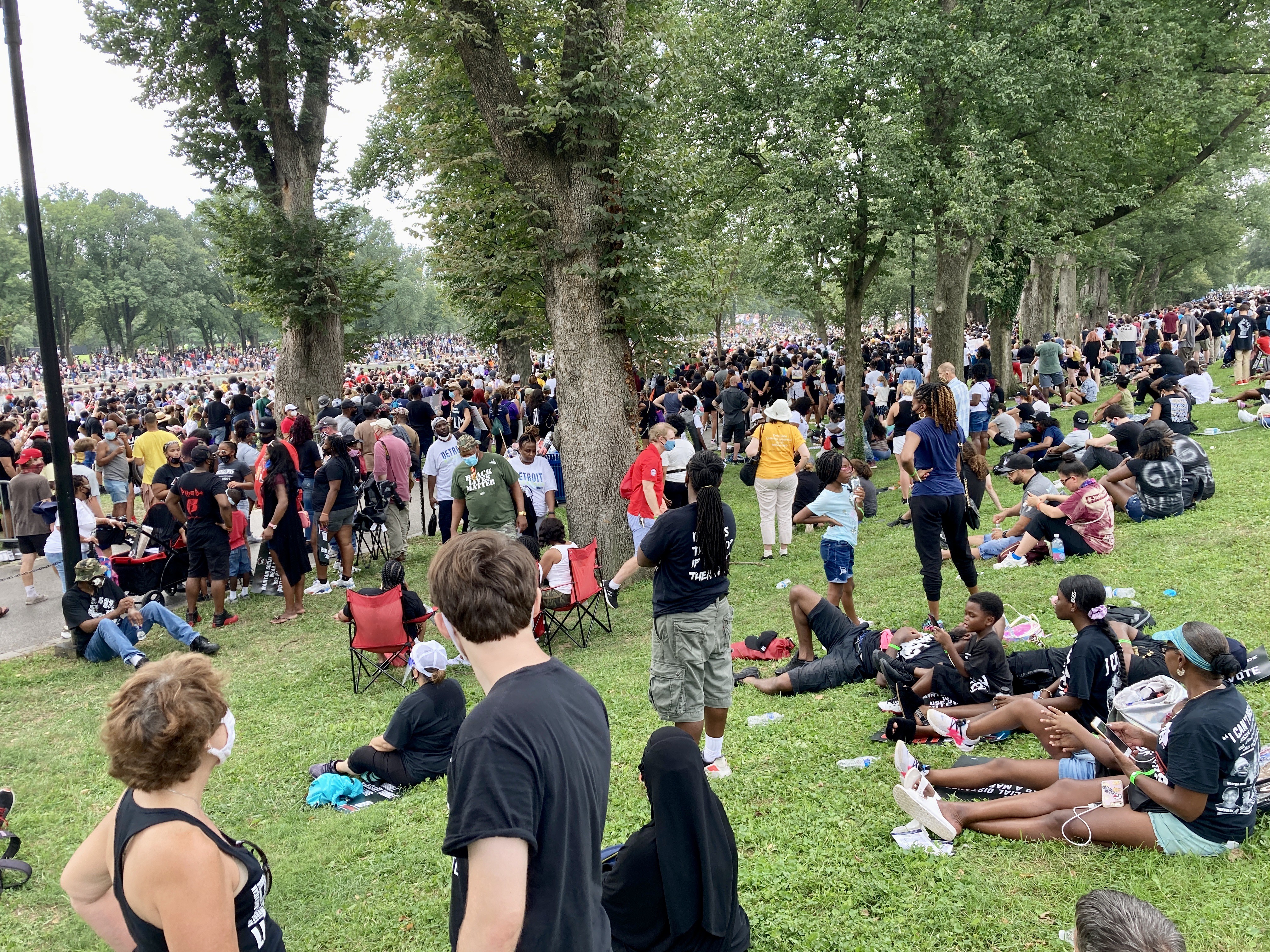 Hungry and dehydrated (we had to ration out the last of our water and then crossed our fingers we’d be able to find more, hopefully before we perished), we dozed in the shade — oh glorious shade! —while people made speeches. 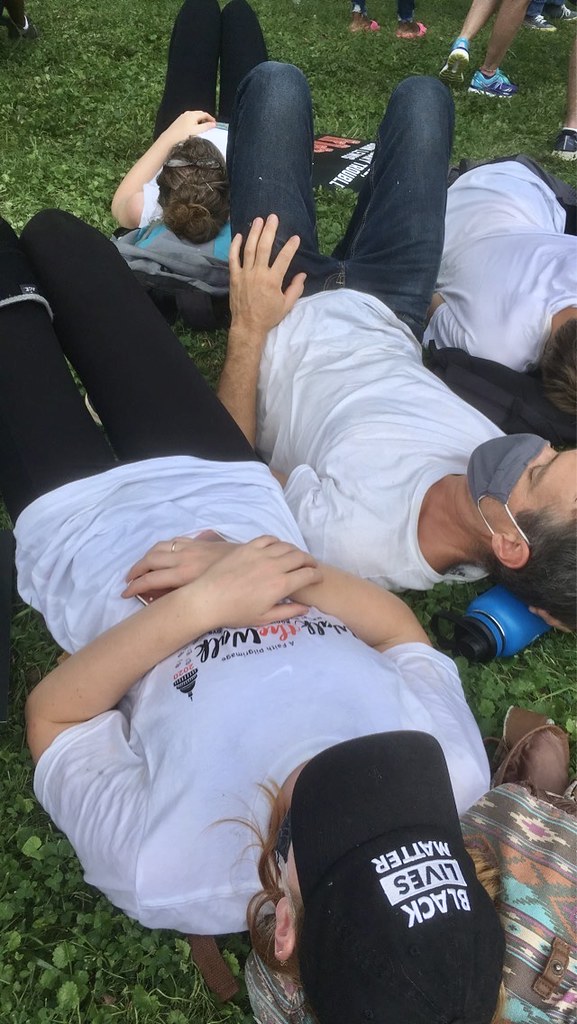 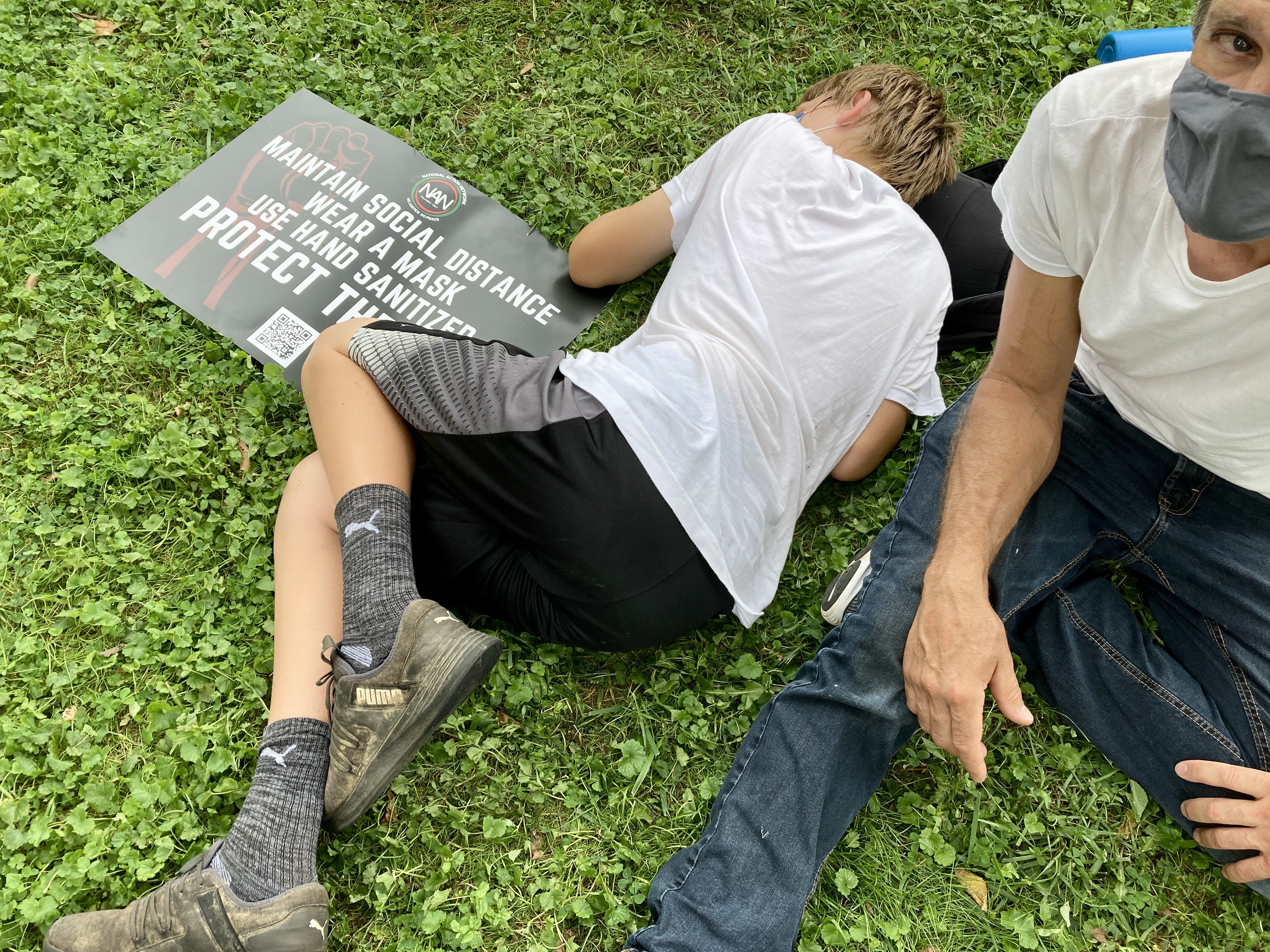 When the keynotes began, though, we all sat up. (We were far enough back that we couldn’t see the jumbotrons, but we could still hear.) Martin Luther King III, his twelve-year-old daughter, Al Sharpton, the family members of Jacob Blake, George Floyd, Ahmaud Arbery, and so many others. To have all those people gathered together in one place — so much pain, so much love and hope — felt momentous, was momentous. This week I want to re-listen to the speeches, and watch them so I can put faces to the words I heard.

For the actual march, we stayed on the edges as much as possible. 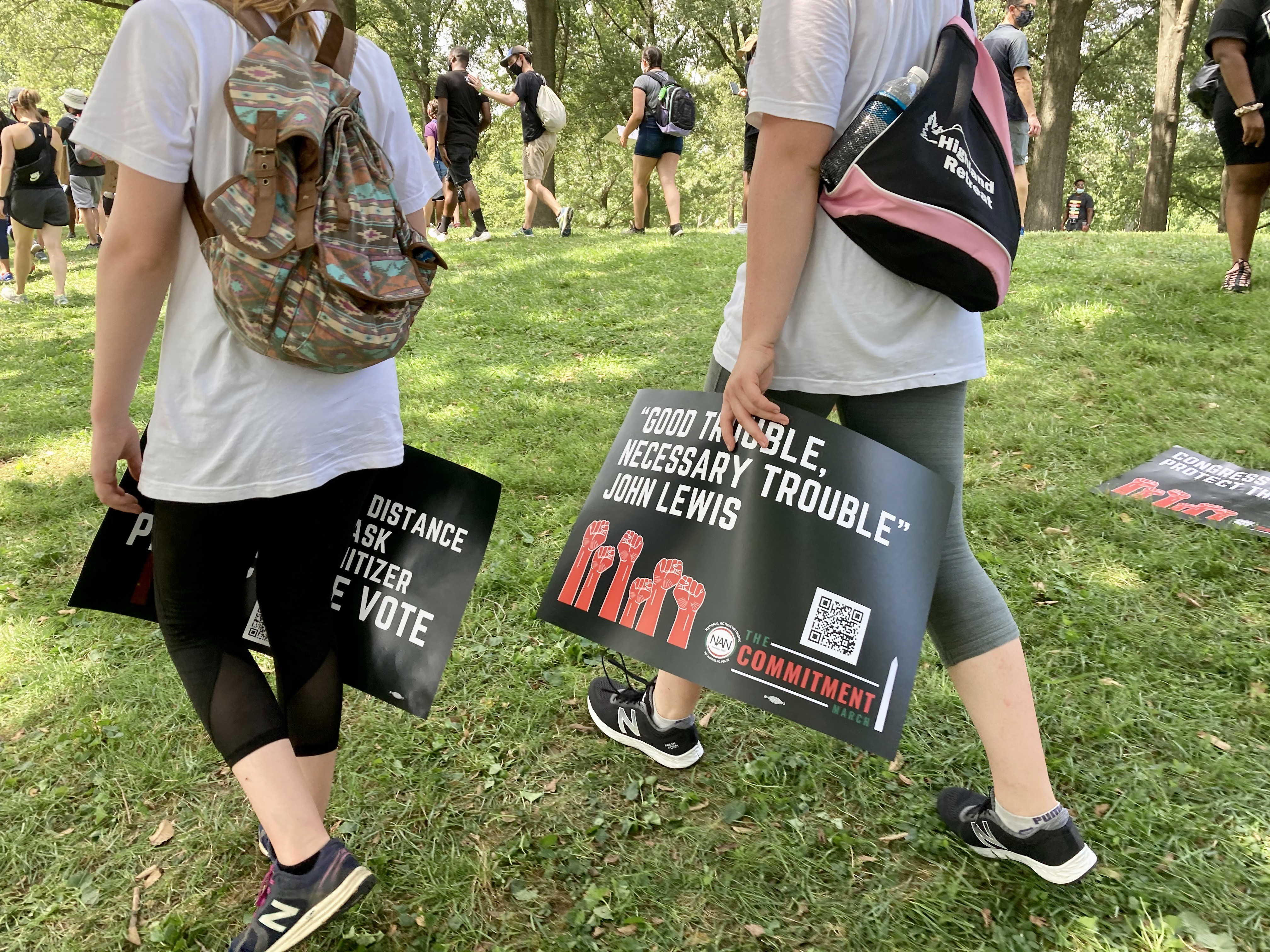 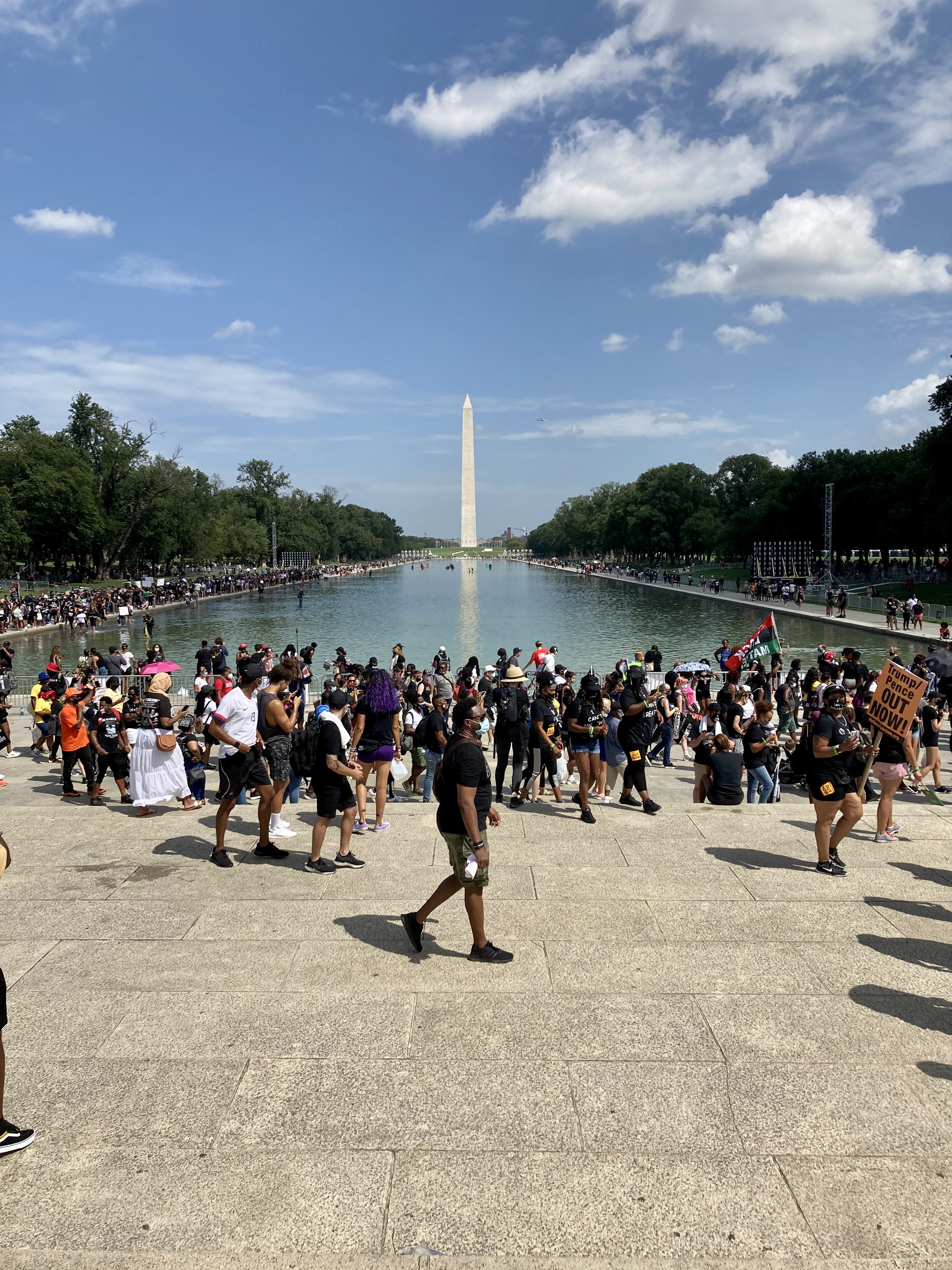 by the time we reached the steps of the Memorial, the area had mostly emptied 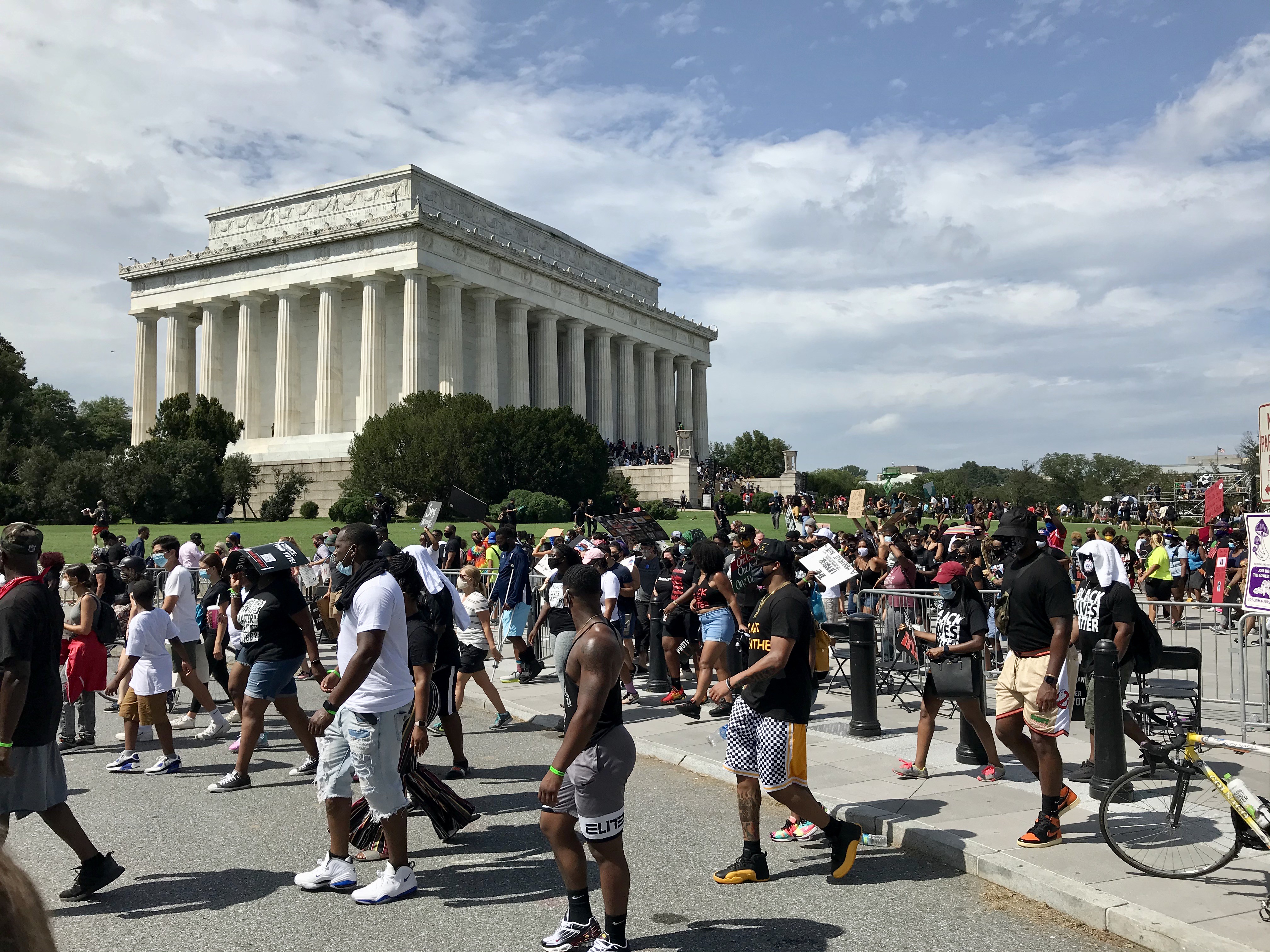 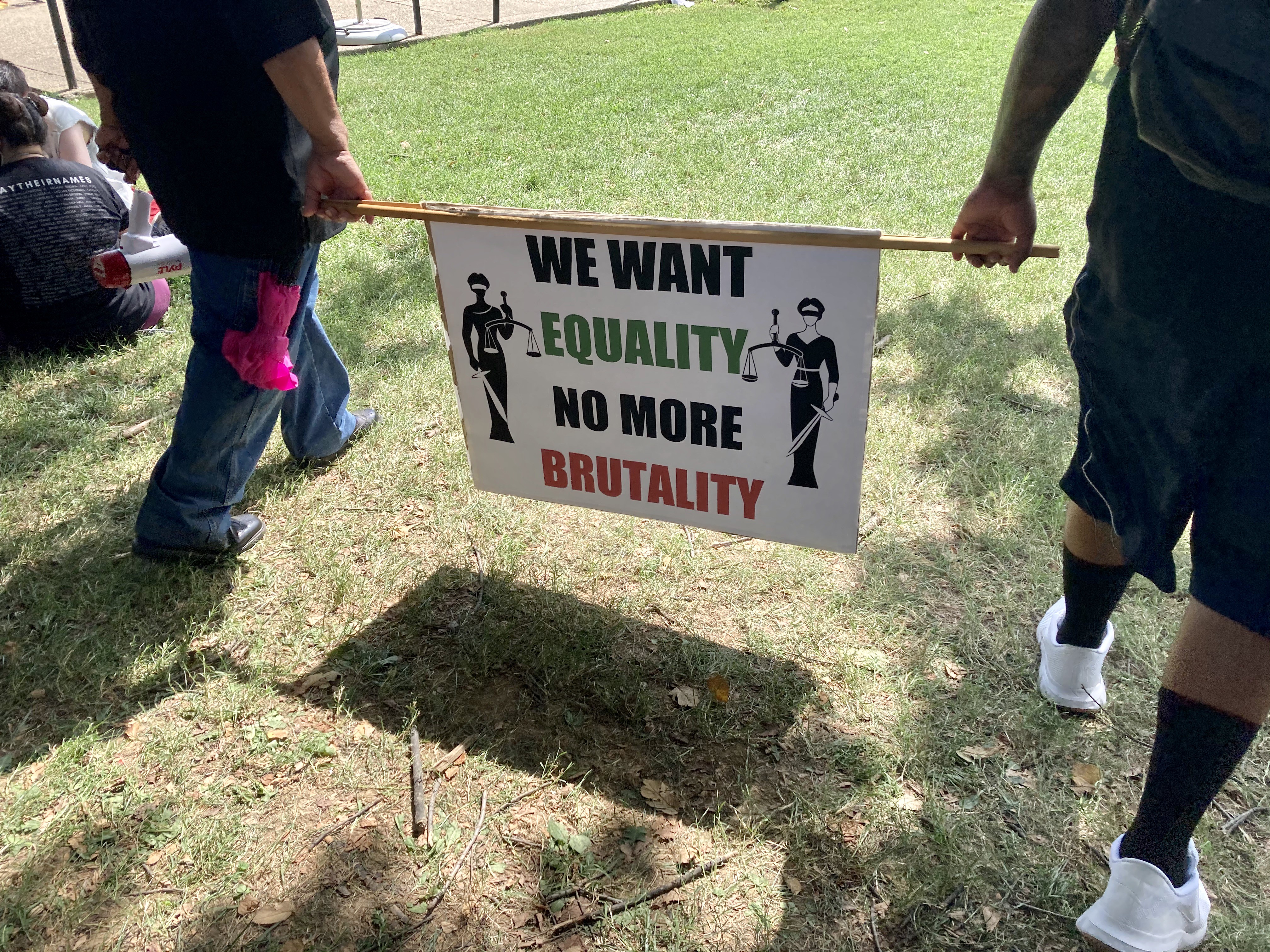 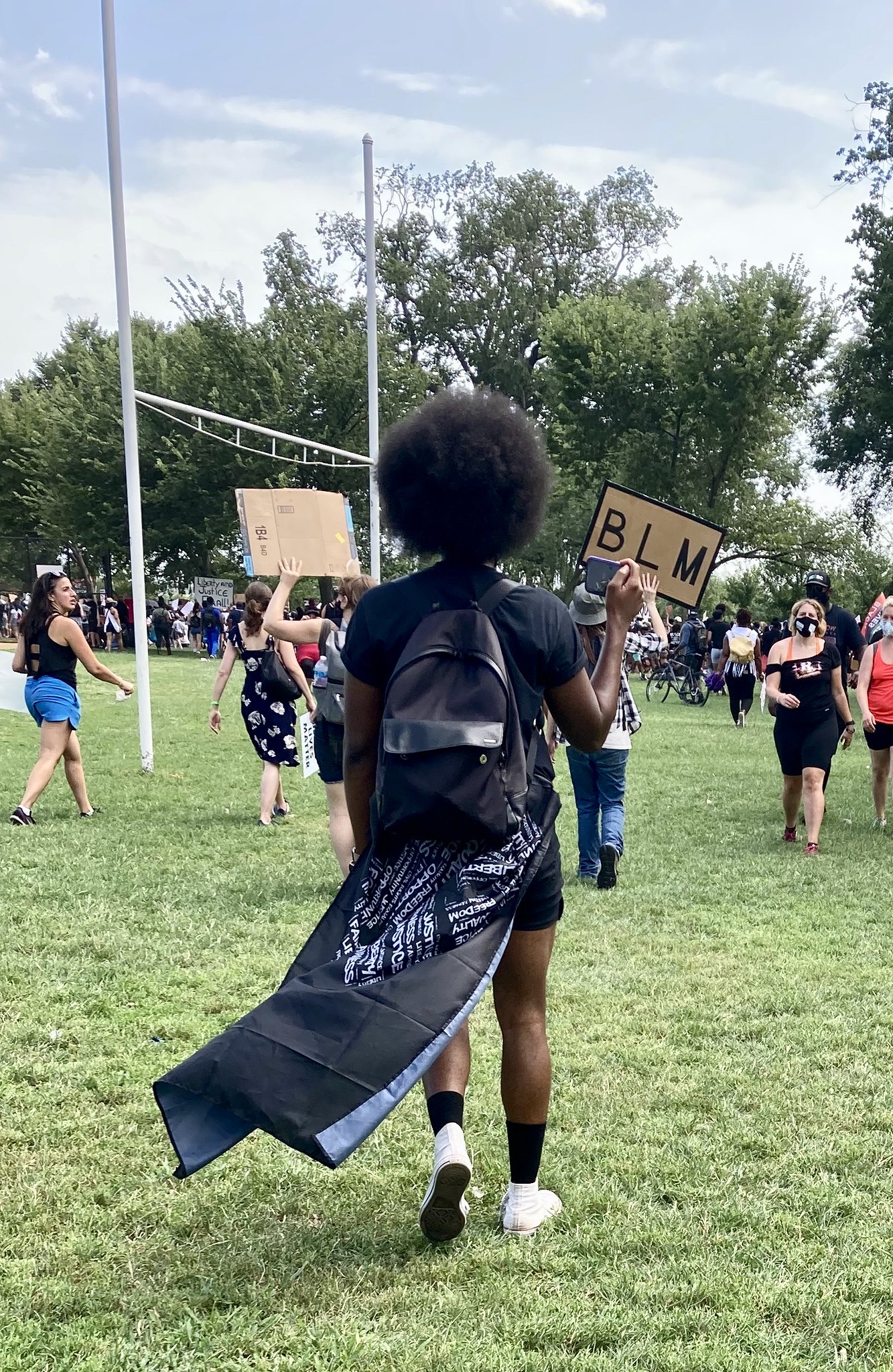 At the end of a long field, we happened upon a small group of people clustered in front of a stage. Minutes later, Al Sharpton appeared, along with Martin Luther King III and Representative Ilhan Omar. So we got to see some of the speakers up close after all! 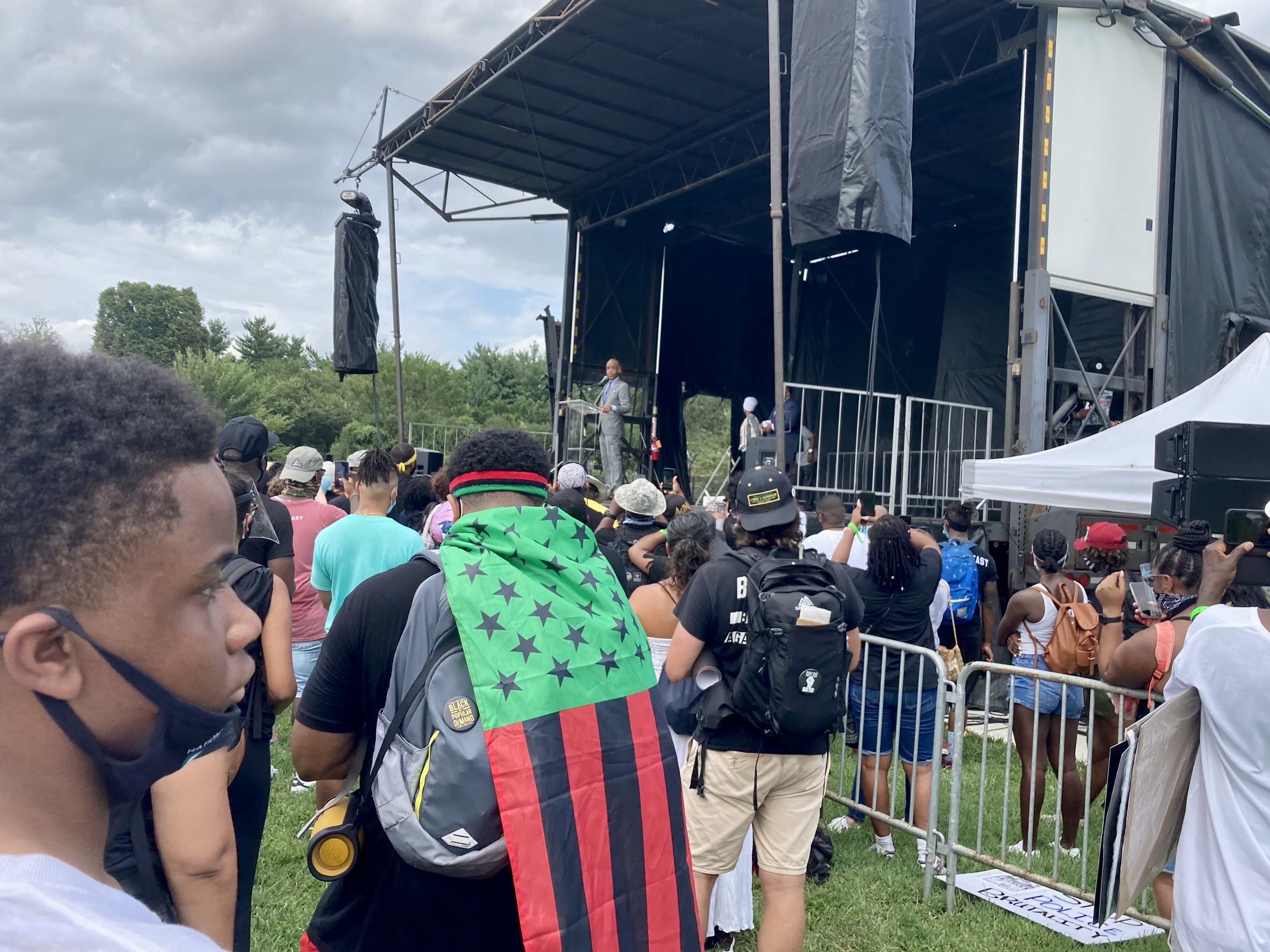 And then we trekked back across town to join our group in front of the Federal Justice Building to protest the federal execution scheduled for four o’clock that day. 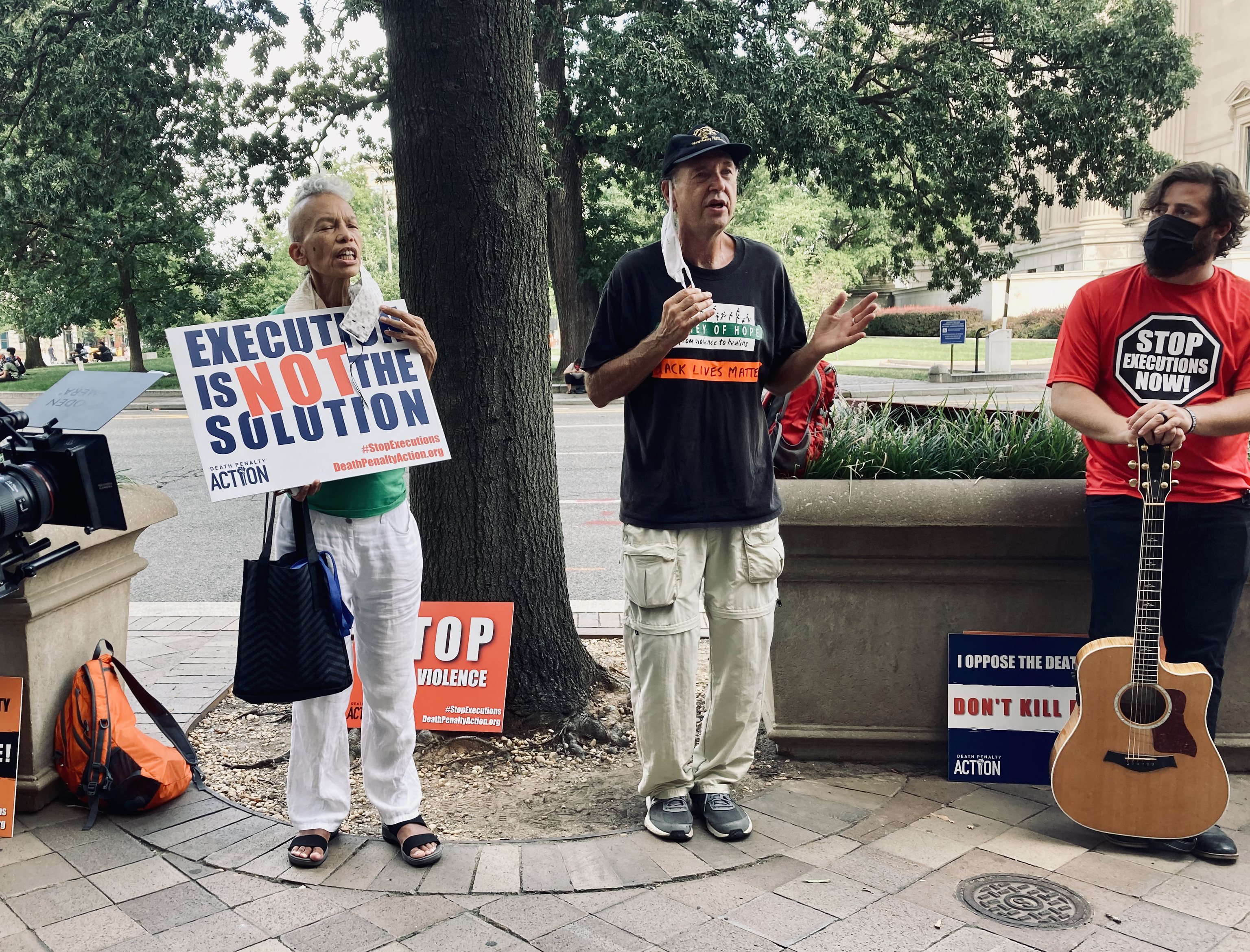 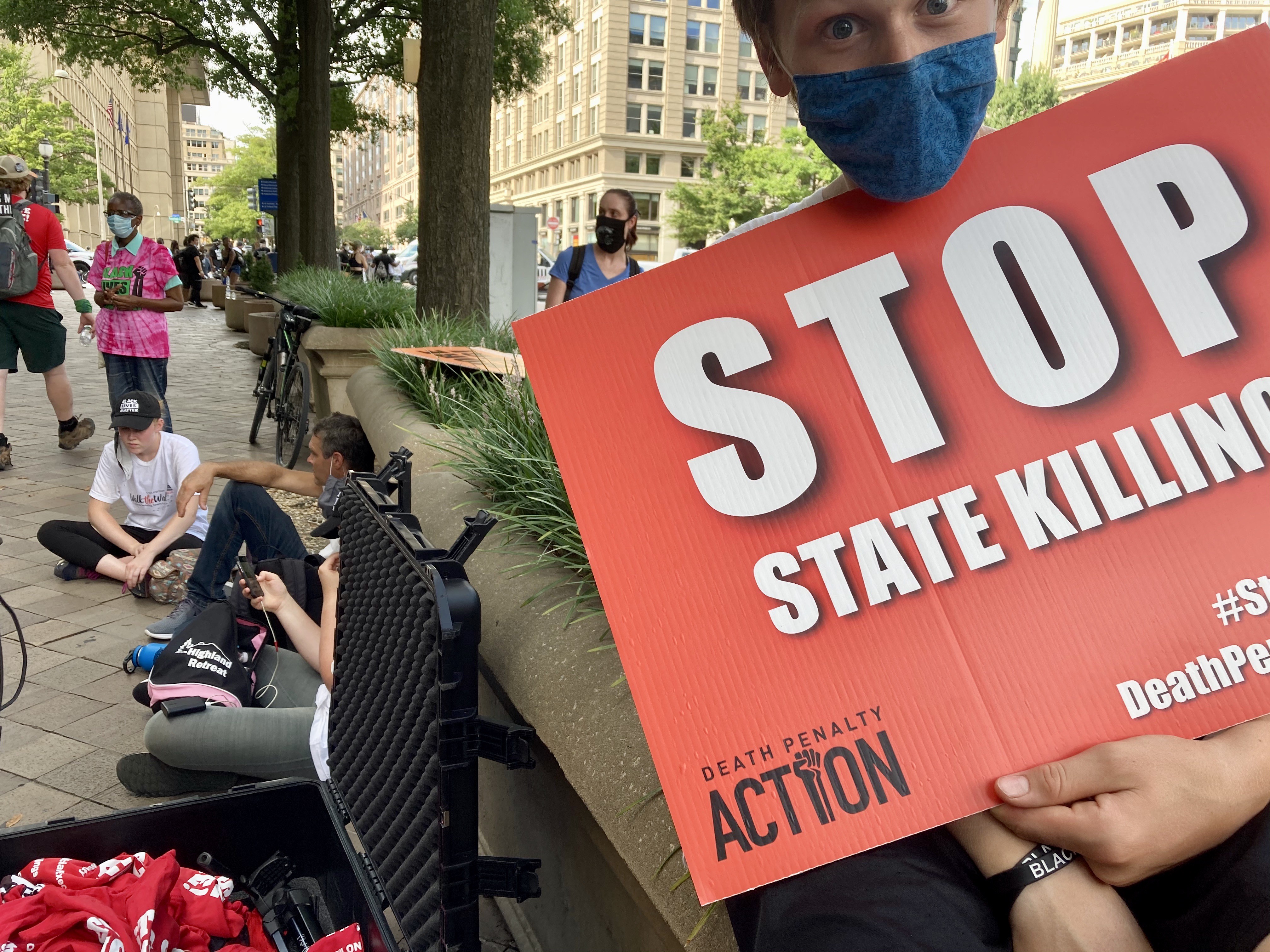 While the execution took place in a federal prison in Indiana, we kept vigil — people took turns speaking and singing — and then, once we received word that it was over, we climbed into shuttles and headed back to the hotel.

And just in time, too, because then the heavens opened and the rains poured down.