Last week three of my kids and I went to a local, youth-led Black Lives Matter protest. Driving down the small town’s mainstreet, we were greeted with a disturbing sight: armed men, their semi-automatic rifles slung over their shoulders or cradled in their arms, clustered together in parking lots and lining the streets. 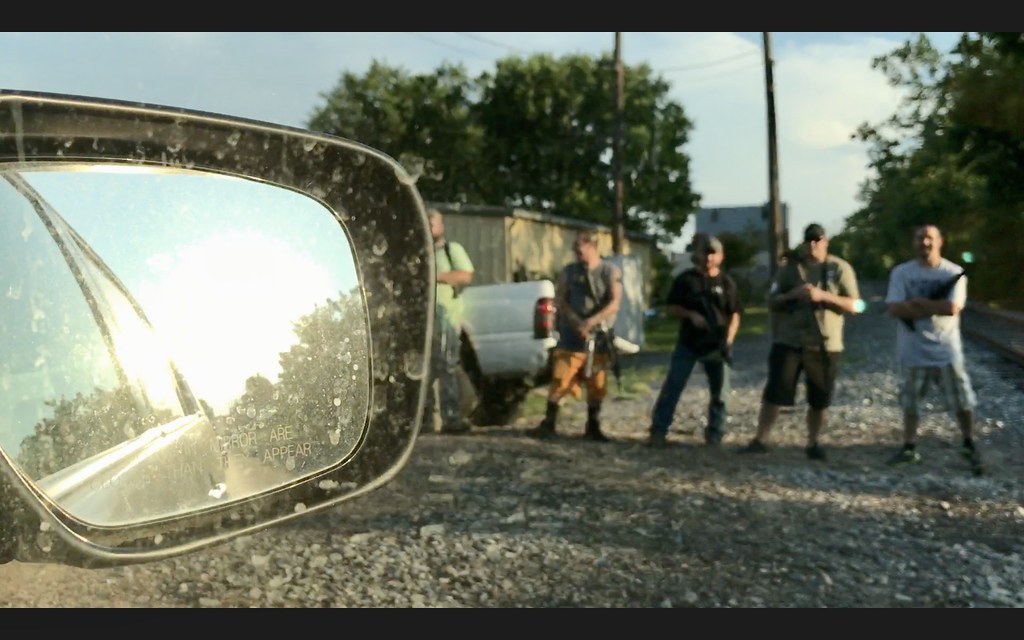 As the line of cars crept towards the park where the protest was to be held, my kids stared, horrified.

“Is this even legal?” my younger daughter asked.

I wasn’t entirely surprised. Another student protest, held a few weeks before and at the opposite end of the county, had been greeted with a similar show of force. The day after that protest when I’d seen the photos on social media of the masked men — members of actual organized militias, I learned — some of them lining the perimeter of the gathering and others lurking in the treeline, I’d felt physically ill.

Still, I’d kind of hoped that sort of craziness was specific to just the other side of the county, not my side.

Over the last few weeks, I’ve been debating whether or not to put a Black Lives Matter sign in our yard.

I’m not a sign person — or rather, my husband’s not. He finds signs — in yards, on bumpers, printed on clothing — too in-your-face aggressive. Why the need to announce everything you think and believe? he asks. And my mediator friend says that yard signs heighten differences, pitting people against each other.

They both have a point. At a time when the political divide in our country is getting dangerously deep — in our rural county, Trump signs are around every corner, dangling from fences and flag poles, affixed to swimming pools and porch railings — is it pointless, or worse, counterproductive, to take a stand here?

On the other hand, maybe it’s all the more necessary?

At a seminar on bullying a few years back, I learned that it’s most productive to align yourself with the person being attacked, ignoring the bully entirely. This doesn’t mean that the bully is never held accountable; rather, in the heat of the moment it draws focus from the one inflicting harm to the one who is most vulnerable, providing that person the necessary support and connection.

Perhaps we need to quit tiptoeing around those who are clinging, white-knuckled, to biggoted ideology and instead focus squarely on this fact: Racism is so prevalent in our culture that when Black children (at the first protest, some of them even wore bullet-proof vests because of death threats) organize a peaceful protest against systemic racial oppression, white men run for their guns.

I knew full well that whether or not I put a sign in my yard was inconsequential — a sign wouldn’t make me more anti-racist, and it probably wasn’t going to change anyone’s mind. The issue is endlessly complex — there is no right answer — so round and round I went, unable to let it go because, at its core, my little sign conundrum stood for a much deeper question: For a white woman in a politically conservative, rural Virginian community, what did it look like to try to be anti-racist?

A couple months back when I learned about our town’s silent march for Black Lives Matter, I wasn’t sure I should attend. Would it be safe? What did Black Lives Matter really mean? I didn’t have any close personal connections to Blacks, so was it even my place to participate? Would I show myself for what I am: a bumbling, awkward white woman?

Finally I decided I’d go. To learn, I told myself. If I felt uncomfortable, oh well — new things often were.

At the march, I was relieved to see lots of people I knew (if they were there, then maybe it was okay that I was, too?) and the whole march unfolded easily, peacefully. I was glad I’d come. I could do this.

But then at the closing gathering, the speaker asked everyone to show their support of Black lives by raising their right fist, and I panicked. I don’t wave my hands in the air at church. I don’t dance. I don’t put my hand over my heart for the pledge of allegiance (and I don’t recite it either). Self-contained, respectful standing is the extent of my physical symbolic gesturing, and now I was supposed to raise a clenched fist into the air?

Not wanting to stand out, I put my fist up. And then I stood there, inwardly cringing and trying to make sense of what I was doing.

“If putting my hand in the air is what they need,” I told myself, “then I need to get over myself and follow their lead.”

It still felt weird, though.

At last week’s protest, when we were kneeling in silence for nearly nine minutes, the same amount of time the then-police officer knelt on George Floyd’s neck, one of the counterprotesters standing on the road at the back of the park started yelling, “Don’t steal for criminals!”

Don’t steal? I thought. But we weren’t stealing anything.

And then I realized, Oh, not steal, kneel. Don’t kneel for criminals.

As his angry shouts continued, his voice cracking under the strain, I noticed people one by one silently — proudly, calmly, courageously — raising their fists.

This time, I didn’t hesitate.

Just two rallys in, and suddenly I was a person who does these things: I am here; my body is here.

It feels so good to finally be moving.

The other day, my brother sent out an email to our family group. “I’m placing an order for BLM signs. Let me know if you want one.” And my older son immediately responded, “Yeah! Thanks. Get one for me!”

That day at lunch we all took turns going around the table, each person sharing their opinion about putting up the sign. It didn’t take long to reach a consensus, and after lunch my son stuck the sign in our yard. 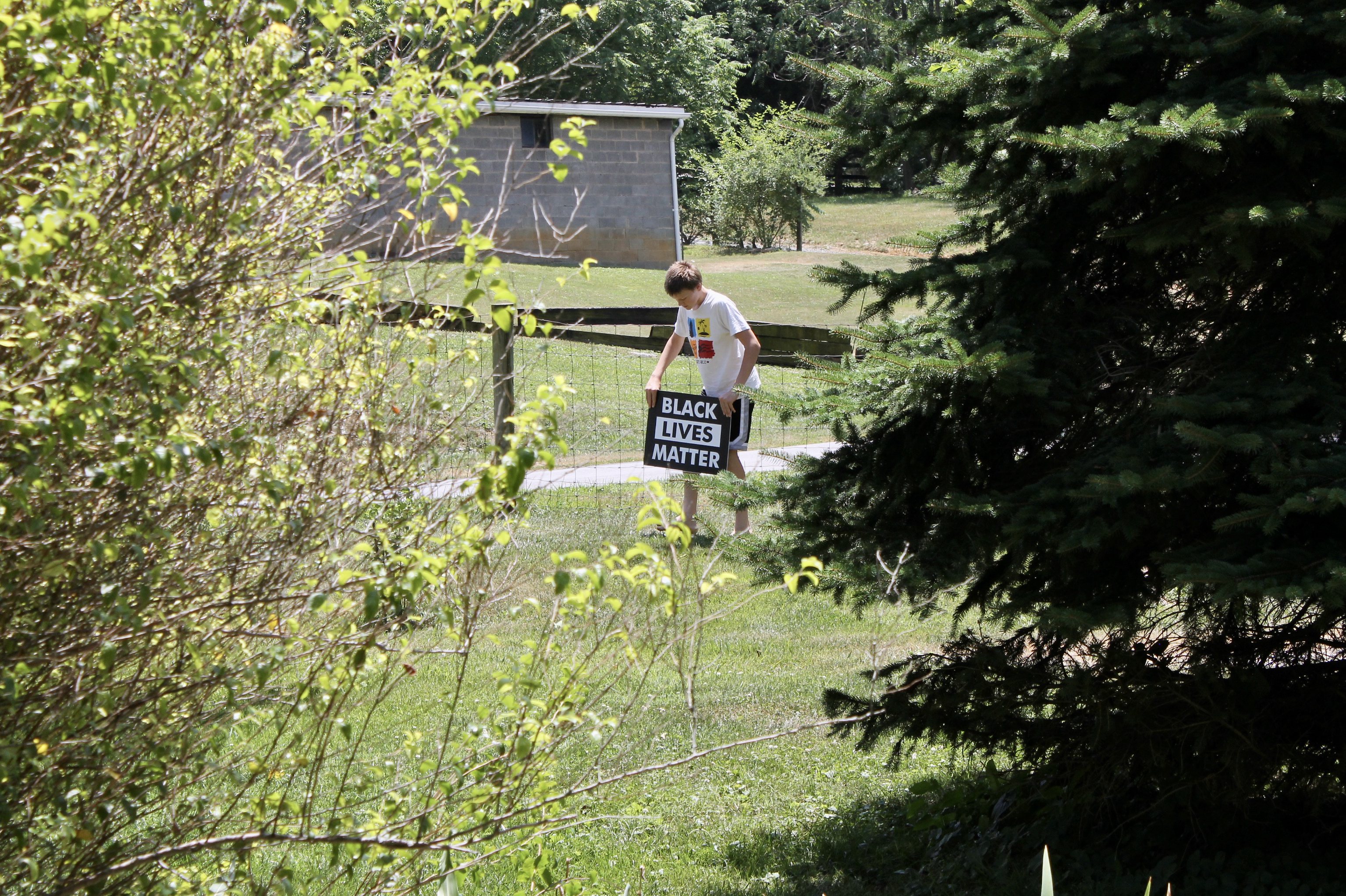 It felt right to have the sign up, but I was still conflicted. A sign didn’t solve anything. Was I doing more harm than good? Was it my place to speak up?

And then the next day when I was up in my room working on this post and the rest of the family was outside doing yardwork, a pick-up drove by and a male voice bellowed “White lives matter!” and all my doubts vanished.

P.S. We’re already on our second sign: last night someone climbed our fence, came into our yard, and took the first one.