The other night, my brother’s family and my family got together at my parents’ place for fresh black raspberry pies with whipped cream. My brother’s kids were playing, but my younger son sat apart. When I suggested he go play, too, he shook his head. Then he paused, reconsidering.

“I could wear this,” he said shyly, pulling his mask out of his pocket. It was more a question than a statement.

“Sure,” I said, and minutes later he was down on his knees, clustered with his young cousins around the sand pile.

Watching him play — the first time in months that I’d seen him play in close proximity to other kids — my heart broke a little. An already sensitive soul by nature, he’s become increasingly cautious, fearful of getting too close to people, preferring to stay home than risk being exposed, or worse, exposing someone else.

I’m glad he cares about other people enough to not want to get anyone sick (if only we could all be as thoughtful, can I get an amen?) but seeing him in the great outdoors surrounded by glorious tall trees and wide-open skies and the people who love him most, and wearing a mask on his face — a mask! — I felt so very sad. Children should’ve have to worry about this sort of thing.

Some days it feels like the whole word has become shadowed — sinister, almost — and I get the distinct impression that we’re living in the middle of a dystopian novel.

I wonder how the story ends.

Gradually, we’re figuring out ways to be safe, yet still live. This means, in nice weather, having an open-door policy: when friends come over, we mostly stay outside, and we don’t worry when people need to come inside to grab stuff, use the bathroom, visit briefly.

*My younger son and I met up with friends at a river for a few hours of visiting and playing in the water. 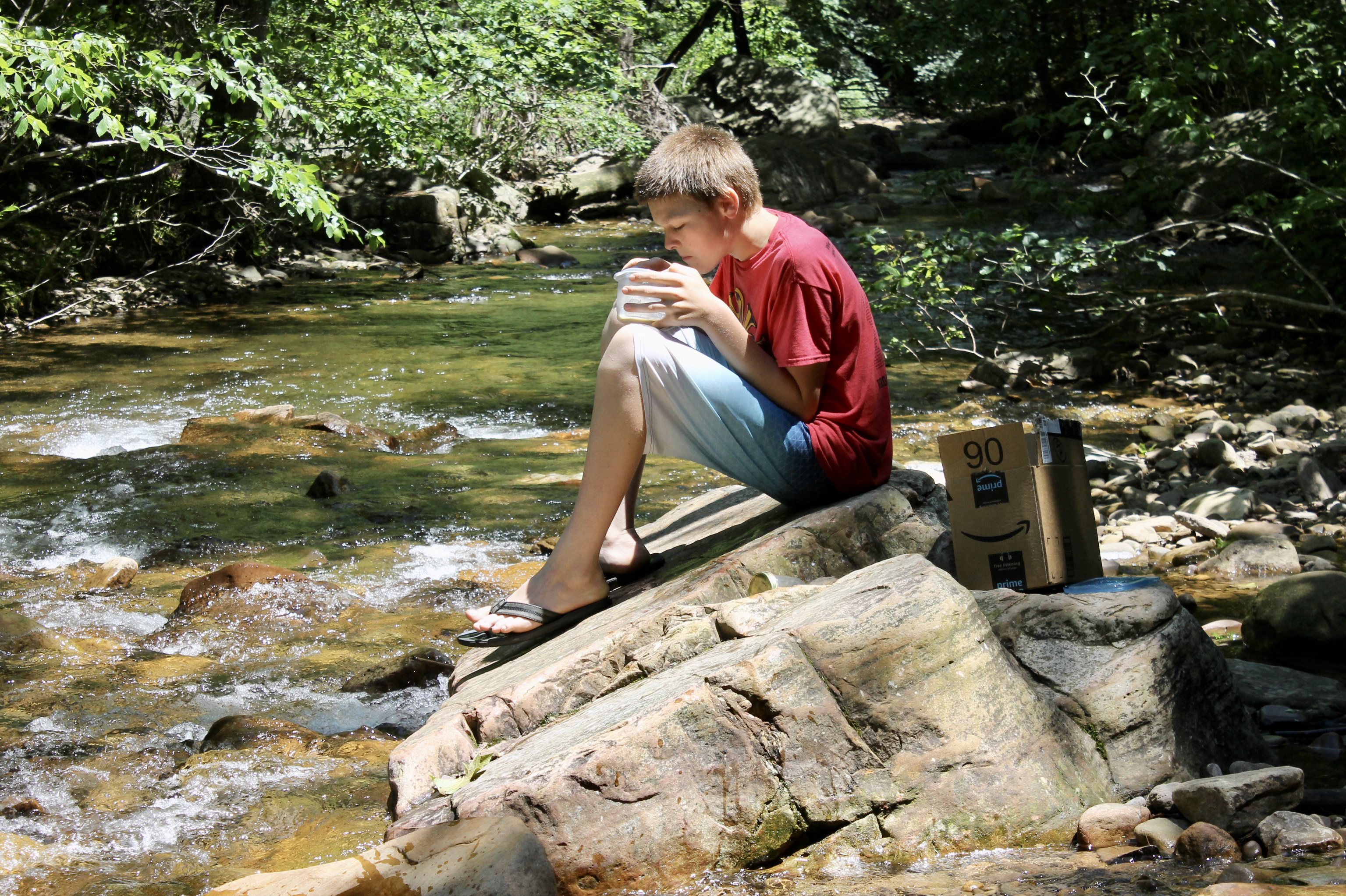 *My older daughter’s friend is staying here, off and on, for a few days. With no air conditioning, our windows are thrown wide, and, thanks to the heat, no one’s too keen on cuddling in enclosed spaces. As an added precaution, she sleeps in the guest room instead of my daughter’s room.

*When some out-of-state young adults needed a place to camp out on their way through our area, we let them stay in our yard, giving them access to the downstairs bathroom and setting out breakfast on the porch.

*My younger two spent the night at my parents’ house, sleeping out on their porches instead of inside.

*My older kids went camping with friends for the weekend. They divided up between three cars to help with physical distancing, and sleeping arrangements involved hammocks and extra tents.

Though that kind of fell to pieces when they got hit with a wicked rainstorm and one of the tents sprung a leak.

Speaking of cars, I think my older son’s new car makes for a perfect covid-mobile. 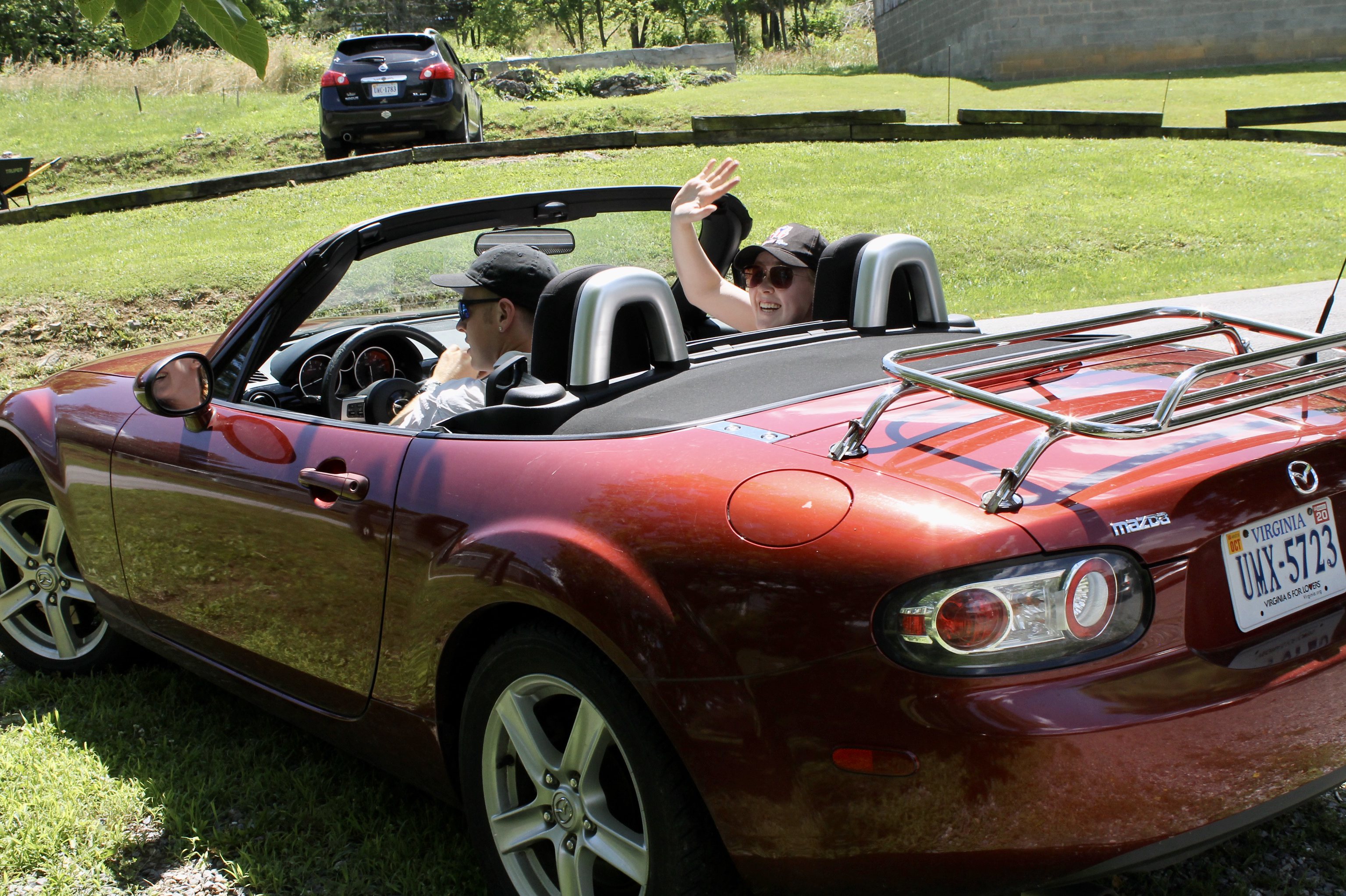 Lots of fresh air and it only seats two!

***
The other day, in need of a dress, I stopped by Old Navy. I breezed through the store, yanking clothes off the racks willy-nilly to try on.
But then I learned that the dressing rooms weren’t open. Seriously? What do they think we do to the clothes while trying them on — lick them?
So then I had to buy a whole stack of clothes and take them home — to my contaminated, germy living space — and then, a couple days later, return the items that didn’t fit.
Whatever. I’m chalking it up to yet another covid inconvenience.
***
Over the past few weeks, I kept hearing people ask, re the Black Lives Matter protests, Why now? Why, suddenly, was George Floyd’s murder the one atrocity in a long, long line of atrocities to garner national attention and kickstart white people into caring?
Wasn’t it obvious? I thought to myself. People were caring now because of the pandemic, right? Stuck at home, people were aching to do something. Frustrated and angry, they needed an outlet, and Floyd’s murder gave them one. Furthermore, since Covid-19 had interrupted routines, it’d shattered any sense of normalcy, jolting people out of complacency and making them more vulnerable and, consequently, more accessible. In a way, the virus was practically inspirational: if everything we thought of as fixed — work, commerce, schools — could fall to pieces in mere days, then maybe real change was possible?
But nobody was saying any of that and, since it felt crass to suggest that real social change was pandemic-motivated, I didn’t say anything out loud (except to my husband).
But then Code Switch did a podcast called Why now, White People? Of the three reasons they mentioned — peer pressure, Trump, and the pandemic — they spent the majority of the time on the pandemic. According to them and their guest social psychologist, the political landscape coupled with the pandemic, has made this an opportune time for protests. So I guess I wasn’t so far out in left field after all!
It’s an excellent podcast. If you have a chance, give it a listen.
***

If you’ve ever wondered how effective masks are, this clip (starting at about the 30 second mark) is for you.

Our beloved Schitt’s Creek darlings salute the teachers on a zoom call.

Oh, David. How we love you!

And a current day Parks and Rec town hall meeting.

The mask wars are real, y’all.