What do you make for supper when it’s 4:50 pm, there’s nothing thawed (and no ideas brewing because ZERO forethought), and everyone crashes through the door growling with hunger?

This was the situation I found myself in Friday last week. It wasn’t like I didn’t have food in the house. I spent 500 dollars several weeks back and we were still well-stocked with the four main starch bases: pasta, rice, bread, potatoes. However, we’d worked our way through most of the leftovers — the spaghetti and meatballs, the sausage lentil soup, the sweet potato and egg bake, the never-ending mojo pork, etc — and it seemed there were no readily-apparent and easily-accessible moving parts to glom onto.

I slipped the potatoes out of their jackets and cut them into thick slices. I smacked two cast iron skillets on the stove and wacked in some butter and bacon grease. Once the fat melted, I arranged the potato slices in a single layer and salted them heavily. While they sizzled and browned (I flipped them once), I opened two cans of black beans into a kettle, added some cumin and smoked paprika (and maybe a couple other spices that I can’t remember), and set them on the stove to heat.

I sliced a couple of the green onions and a handful of radishes that my daughter had brought home and dumped them in a bowl with a chopped avocado (yay, it’s not rotten!), the juice of a half lime, and some salt. I plucked a few green leaves from a rotting bunch of cilantro and tossed them in. I stuck a spoon in the jug of salsa and another spoon in the almost-empty jar of sour cream, and I dug a container of leftover grated cheese out of the cheese drawer. Supper was ready.

What’s this? everyone wanted to know.

“Sweet potatoes with black beans and toppings,” I said. “Here’s how you eat it,” and I fixed a plate so they could see. “It’s like rice and beans but without the rice.” 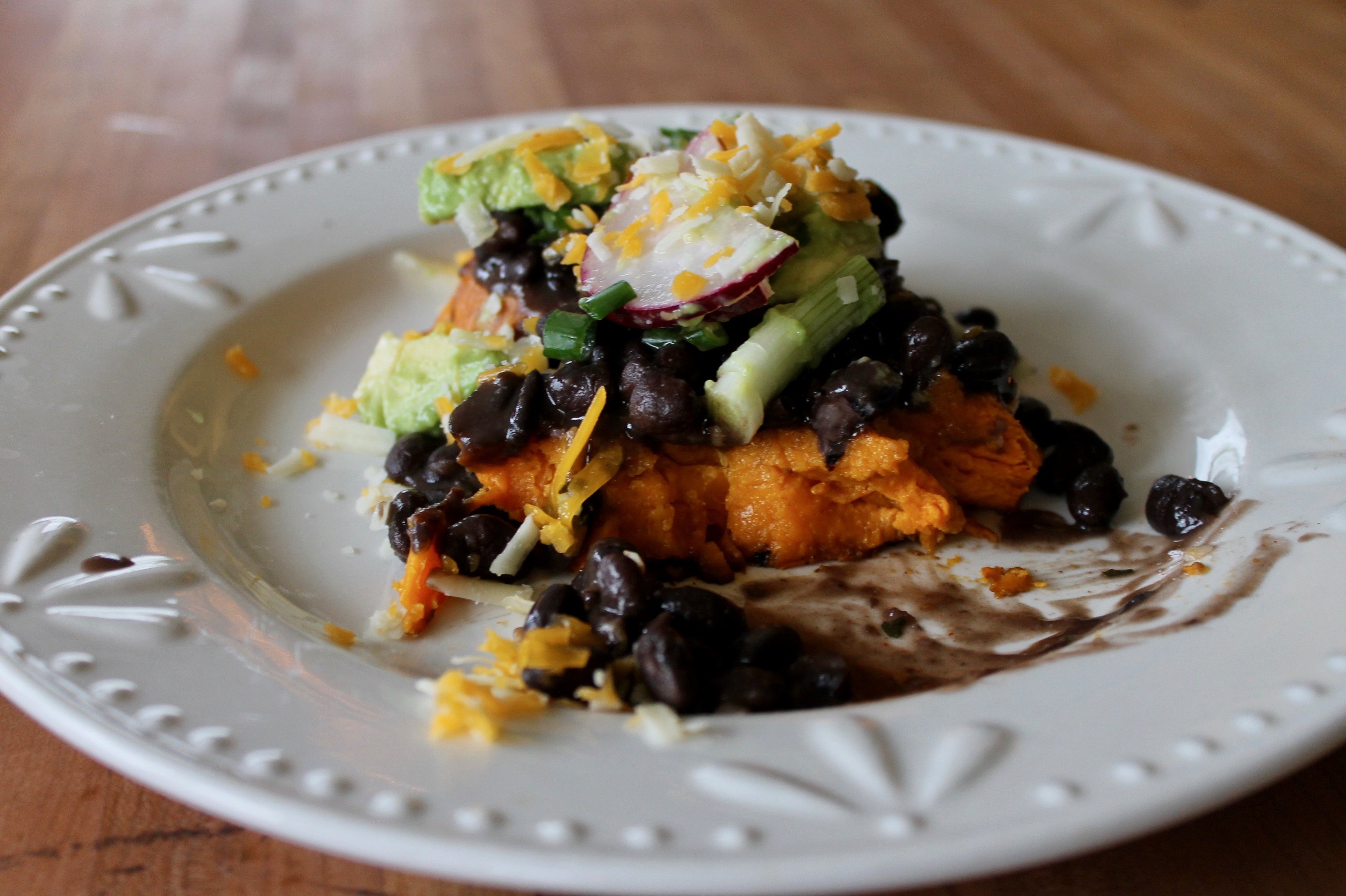 No one thought much of the meal — it was food, it was good, the end — but I was enormously pleased with myself. It was so ordinary — leftovers and canned beans and a hodge-podge of random bits — and yet it was creative and healthy and original.

And to think, only a short time before I’d felt like there was “nothing” to eat, ha!

What rabbit-out-of-hat dinners have you made lately? Enchant me, please. It’ll still be at least a couple days before I’ll get to the grocery store…