A few months back, my fridge developed an alarming and persistent rattle. It might last another five years, or another five days, but after seventeen years of reliable service, the end was clearly drawing nigh. My husband bought a replacement part to forstall the inevitable, and we began to research fridges. We had a few ideas, but still, we couldn’t bring ourselves to act. The fridge was working, after all.

And then the island happened. Standing on the far side of my now expansive workspace, I realized that, in order for the island to be fully useable and for the kitchen to feel balanced, I needed to turn the entire kitchen into, well, a kitchen. The desk needed to go, and —

Hey, wait! Would it work to put the fridge in that spot? In the old fridge’s space, we could put a small desk of some sort, and — be still my beating heart, o! — a coffee station.

Once I had a plan, things happened. First, lots more research. Second, a trip to a couple big box stores to see the actual fridge I’d chosen. 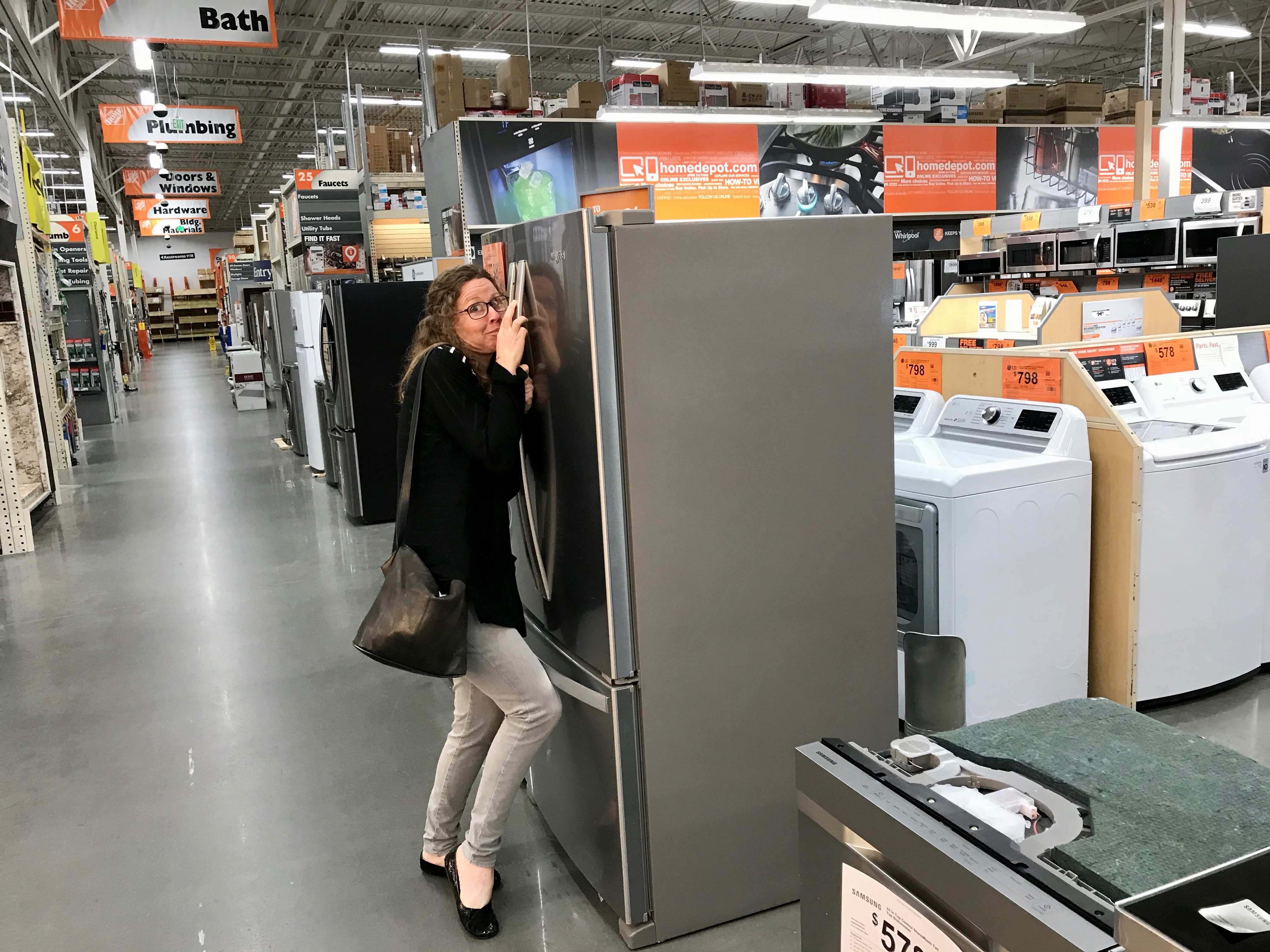 The one at Home Depot was on sale for $1,300, but the sales rep said that another sale was coming up in several days and it’d probably drop more. So we poked around in a second-hand appliance store and then, on a whim, popped into Ollie’s — my husband said they had a scratch-and-dent section. Lo and behold, they had the exact fridge we were looking for, brand new but with a few small dents, for just $900. We decided to think it over — the Home Depot sale was coming — and drove off. But we only got a couple miles down the road before turning around. There was no way Home Depot was going to shave 400 dollars off that fridge (and we were right — it only dropped a hundred).

Despite my push for this fridge, I was rather ambivalent about it at first. Perhaps it was the hefty pricetag? Or maybe the niggling worry that we hadn’t made the best possible choice? Or just, the seismic shifts in my kitchen caused me to feel out of sorts?

Whatever the reason, I felt discombobulated and unsure. Was it too big? Too dark? Too out of the way? (We briefly — very briefly — considered recessing it into the side of the house). Also, for all it’s hugeness, I didn’t feel like it had a ton ton of room. Would it provide adequate storage for all my gallon jars and bulky pans and trays? And the freezer felt clunky. I could pile the drawers full when they were open, but if I went overboard, they wouldn’t close. (As opposed to my former top freezer which I could stuff and jam with impunity.)

But I persevered and, within a couple days, I was head over heels again. 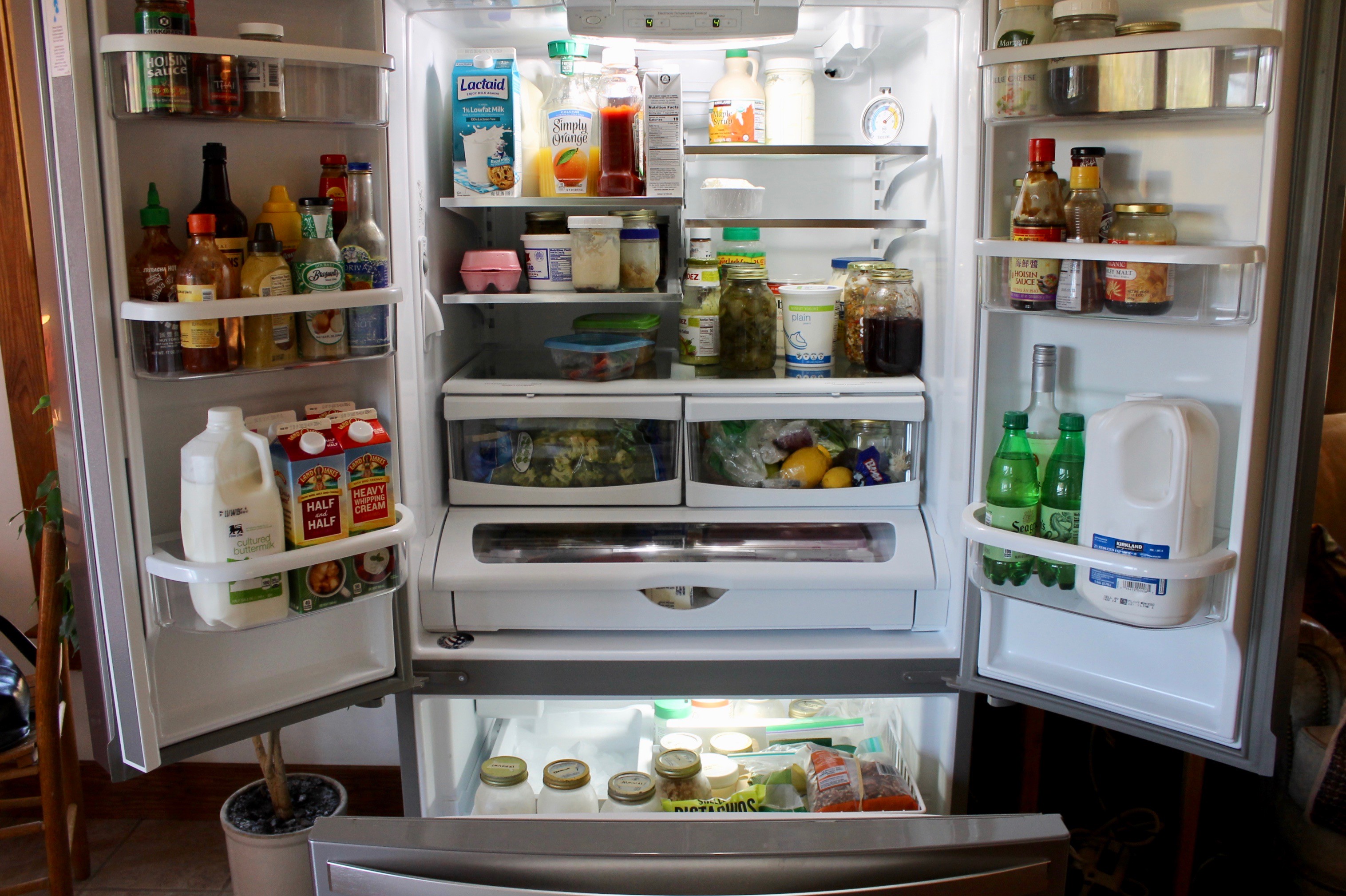 Now whenever anyone walks in the house I drag them over to the fridge and make them stand there while I pull out the deep crispers (that I can see into!) and the huge cheese-meat drawer (that I stuff with eggs and cream cheese and butter, along with meats and cheeses) and the water dispenser (that we don’t use) and my leftovers shelf and pint jar shelf and quart jar shelf and the couple shelves I keep mostly empty so they’re always at the ready for a casserole dish or a few loaves of bread dough that need to proof. 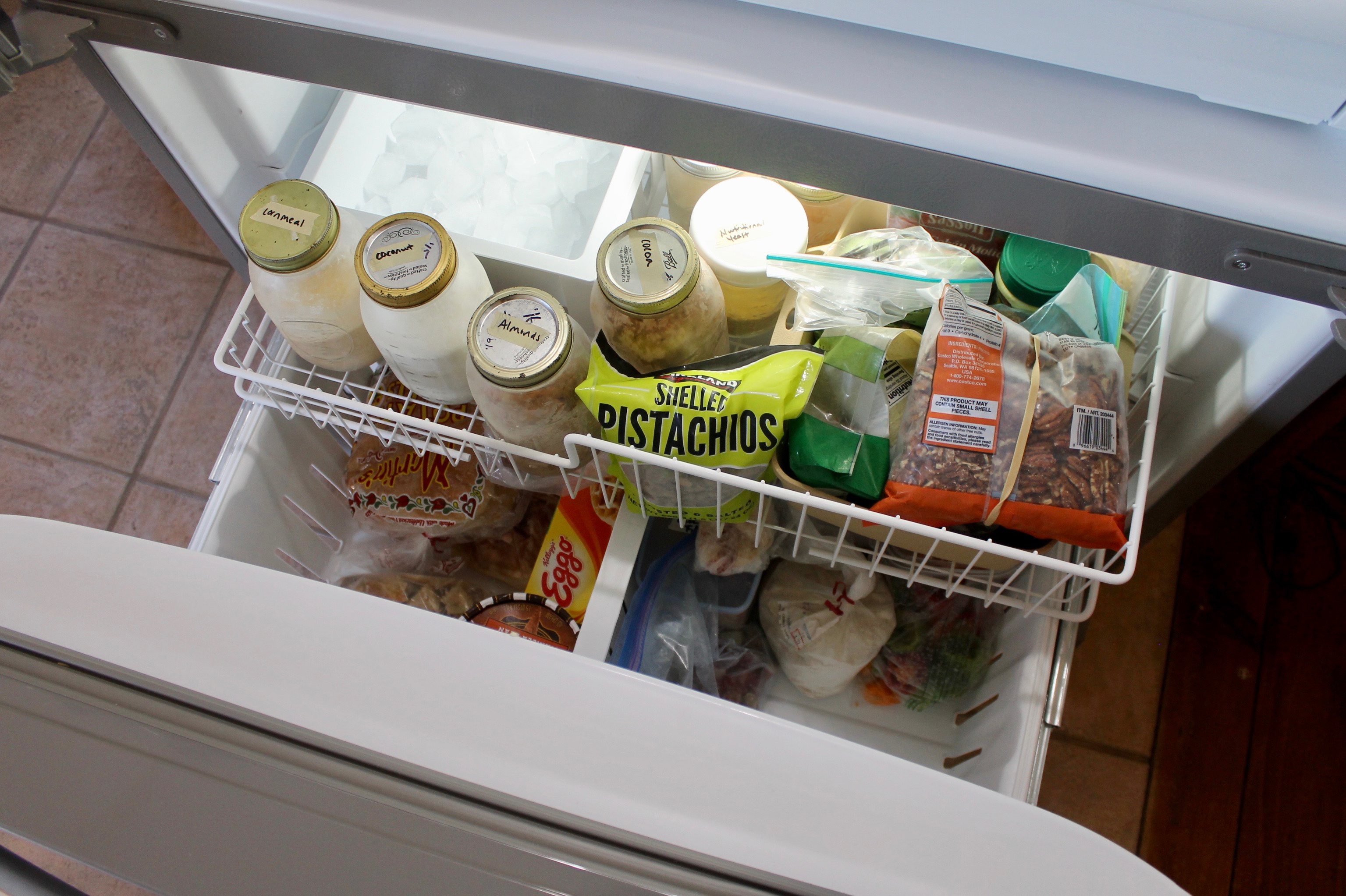 I even yank open the freezer to proudly flaunt my ice maker — an ice maker! — and collection of quart jars, newly labeled on the lid for easy identification. 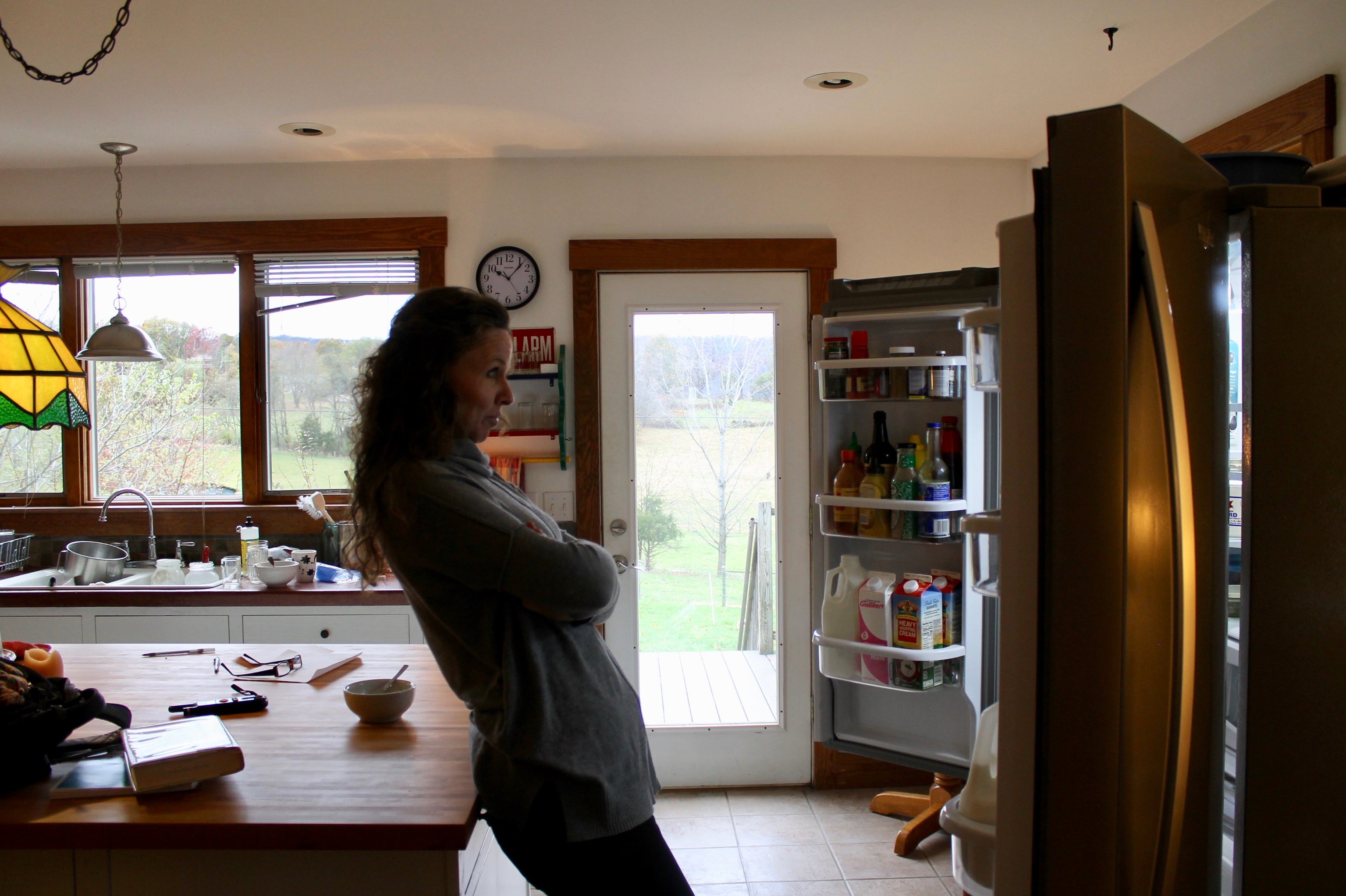 Bonus: now there’s a huge, empty, clean fridge in the basement, just waiting to back me up. (Except now it’s half full since just this morning I made a run to the orchard for lots of apples and cider because cold storage!!!)

Temporarily, we’ve set up the office corner and coffee station. 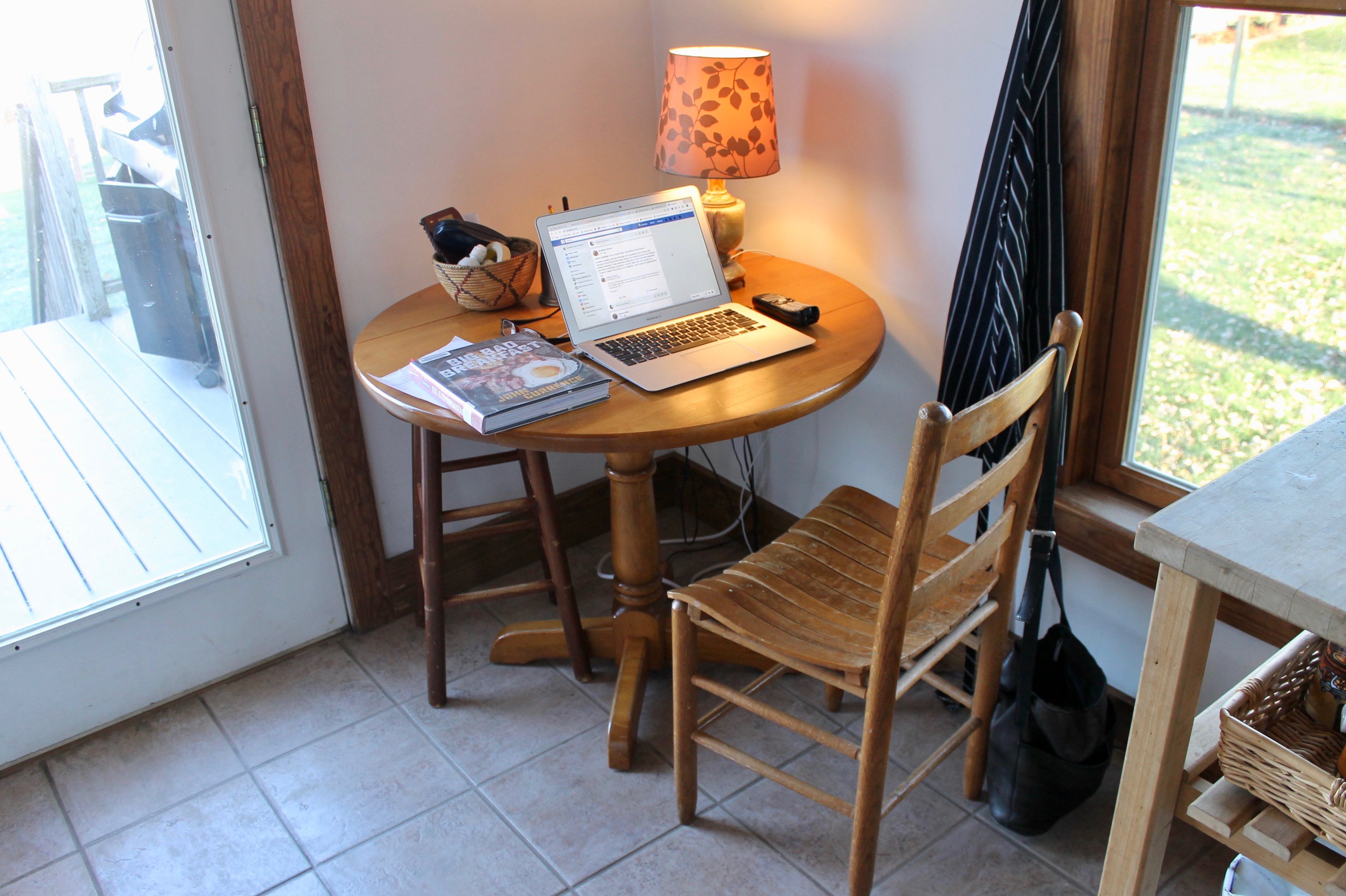 I stole the little round table from my older daughter’s room (it is my table, after all!) and for now that’s my desk.

Then I crept into my father’s shop and, with my mother’s blessing, stole his rolly table. 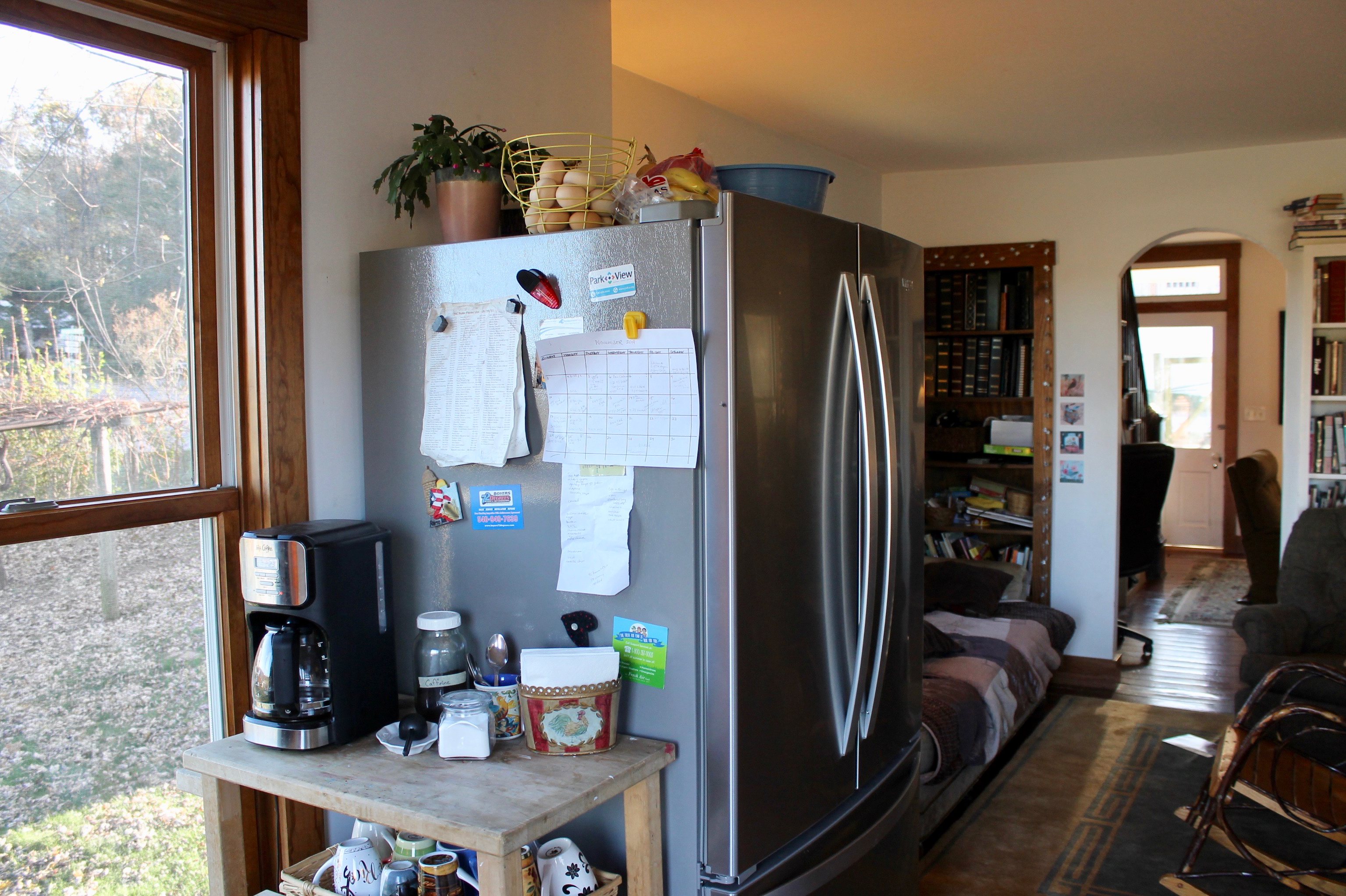 Tucked next to the fridge, it makes a perfect station for everything coffee and tea. I even got an electric water pot so I don’t have to run across town (ha!) to the stove. 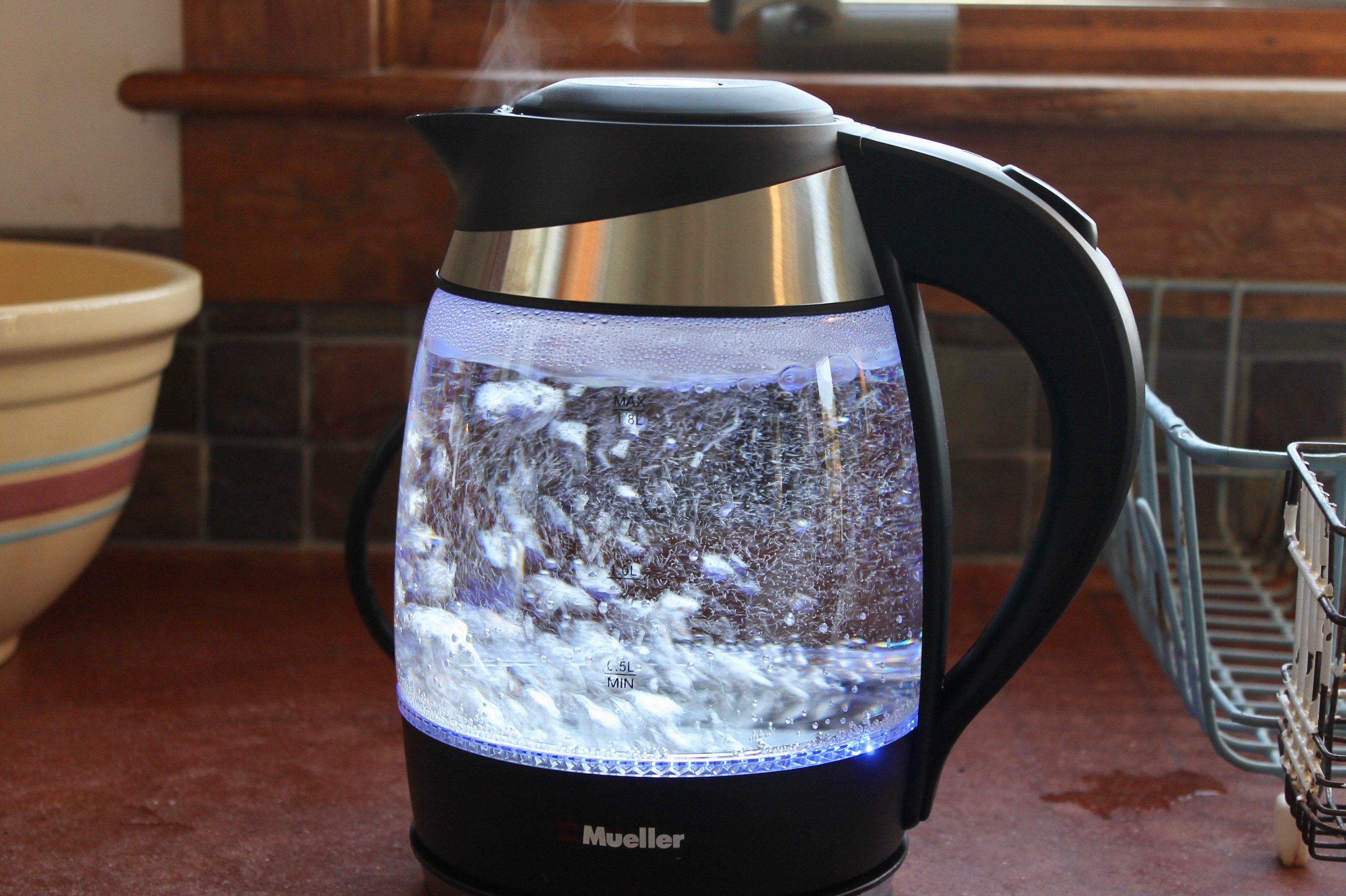 And then I stocked one of the island drawers with teas (and cereal bowls and spoons since, for easy breakfastry, the cereal drawer is right below the tea drawer, and directly opposite the fridge). 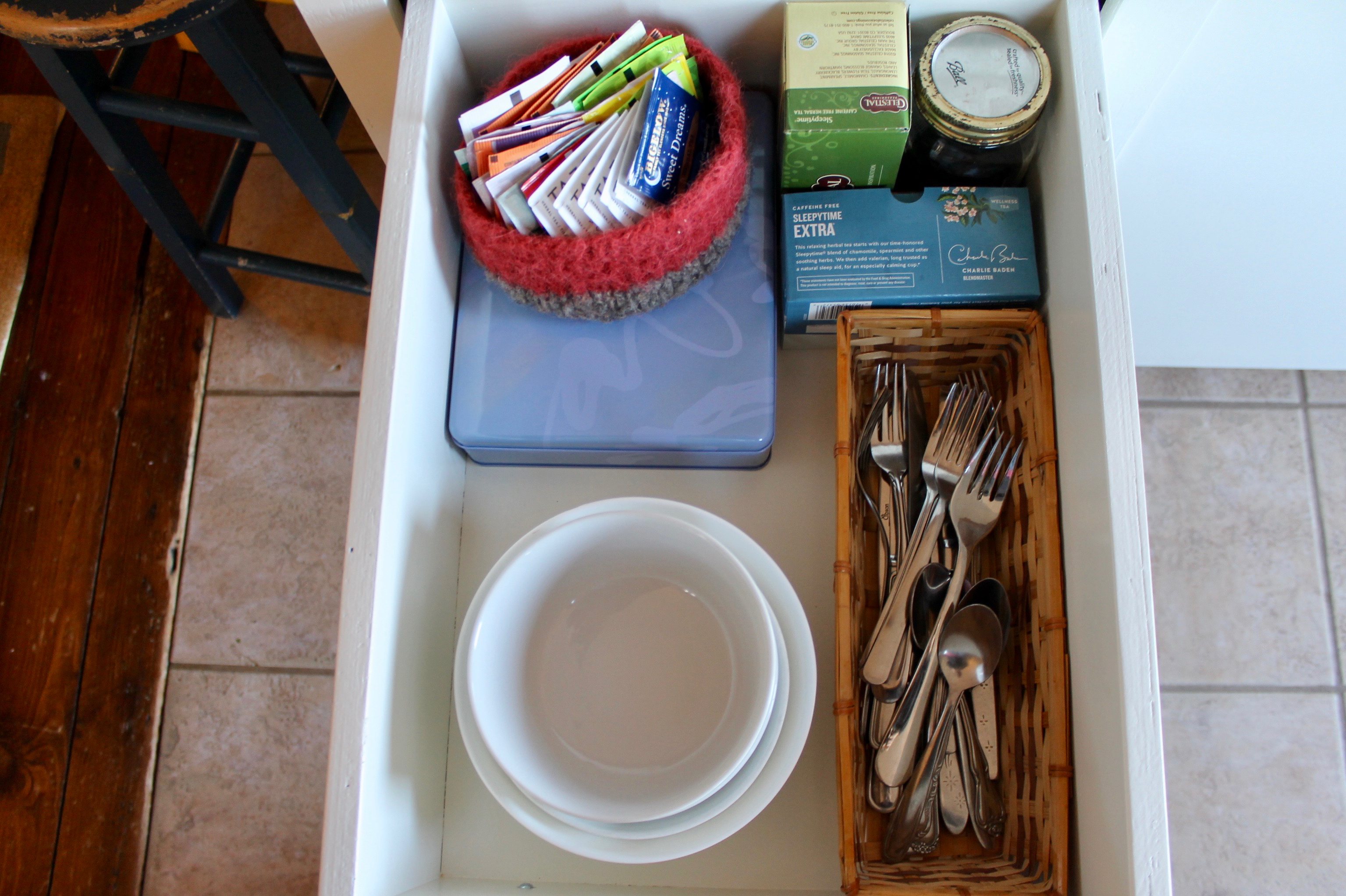 Finding a place for the coffee pot has always been a bit of a scramble, especially whenever we’ve had company. Even for everyday, I stored the coffee pot in the back hall, just to get it off my counter. To have a spot specifically for coffee (and hot beverages and other drinks) feels utterly luxurious, like I’ve finally arrived.

A basket on the rolly table’s middle shelf holds all my mugs (which means I now have a freed-up kitchen counter above which the mugs used to dangle — Hm, how to best utilize that corner?), and the bottom shelf hold the tins for oats and bread flour. 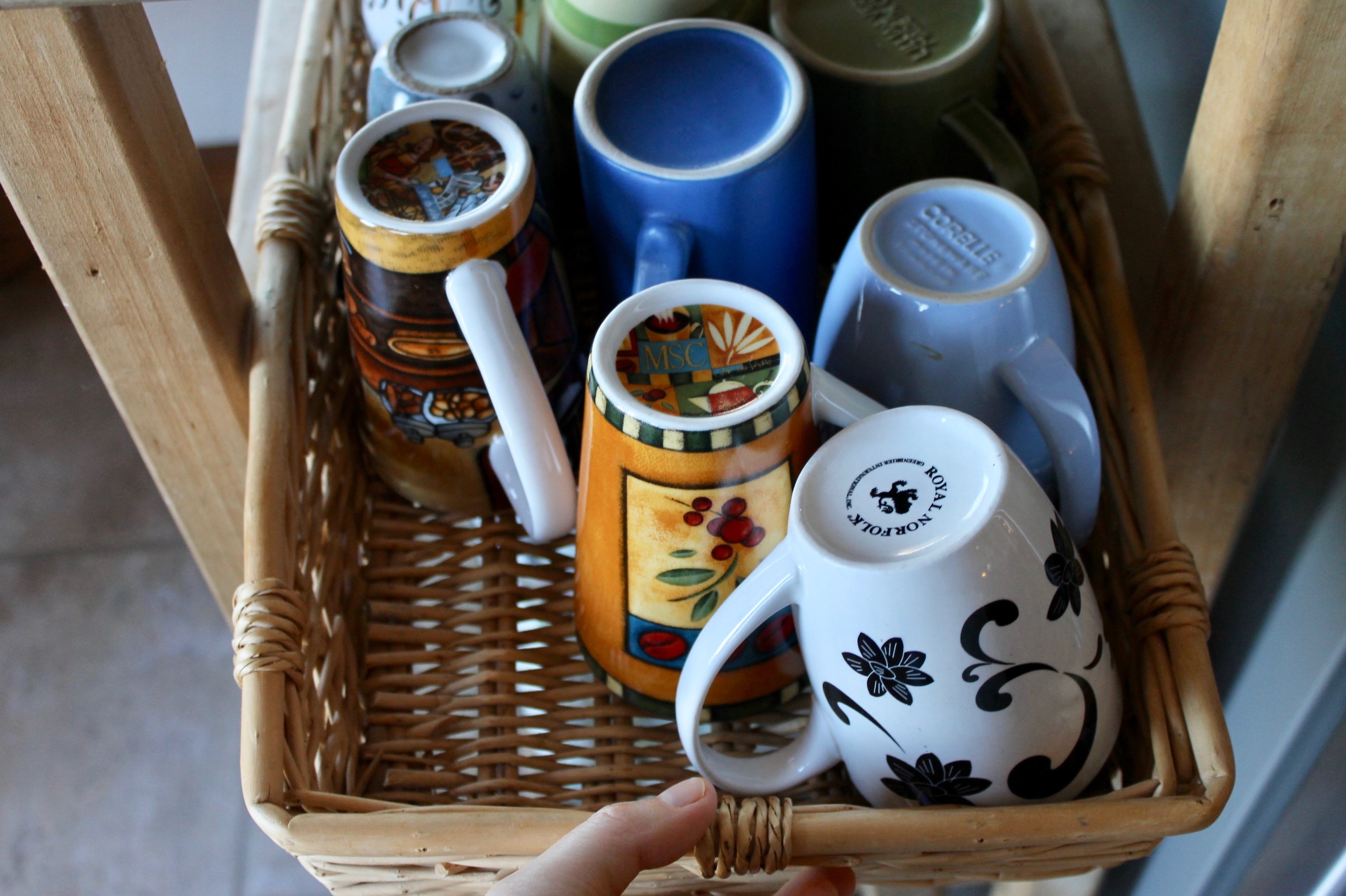 People keep saying I should clean up the rolly table — paint it, maybe — but I kind of like the artsy paint splotches and stains. 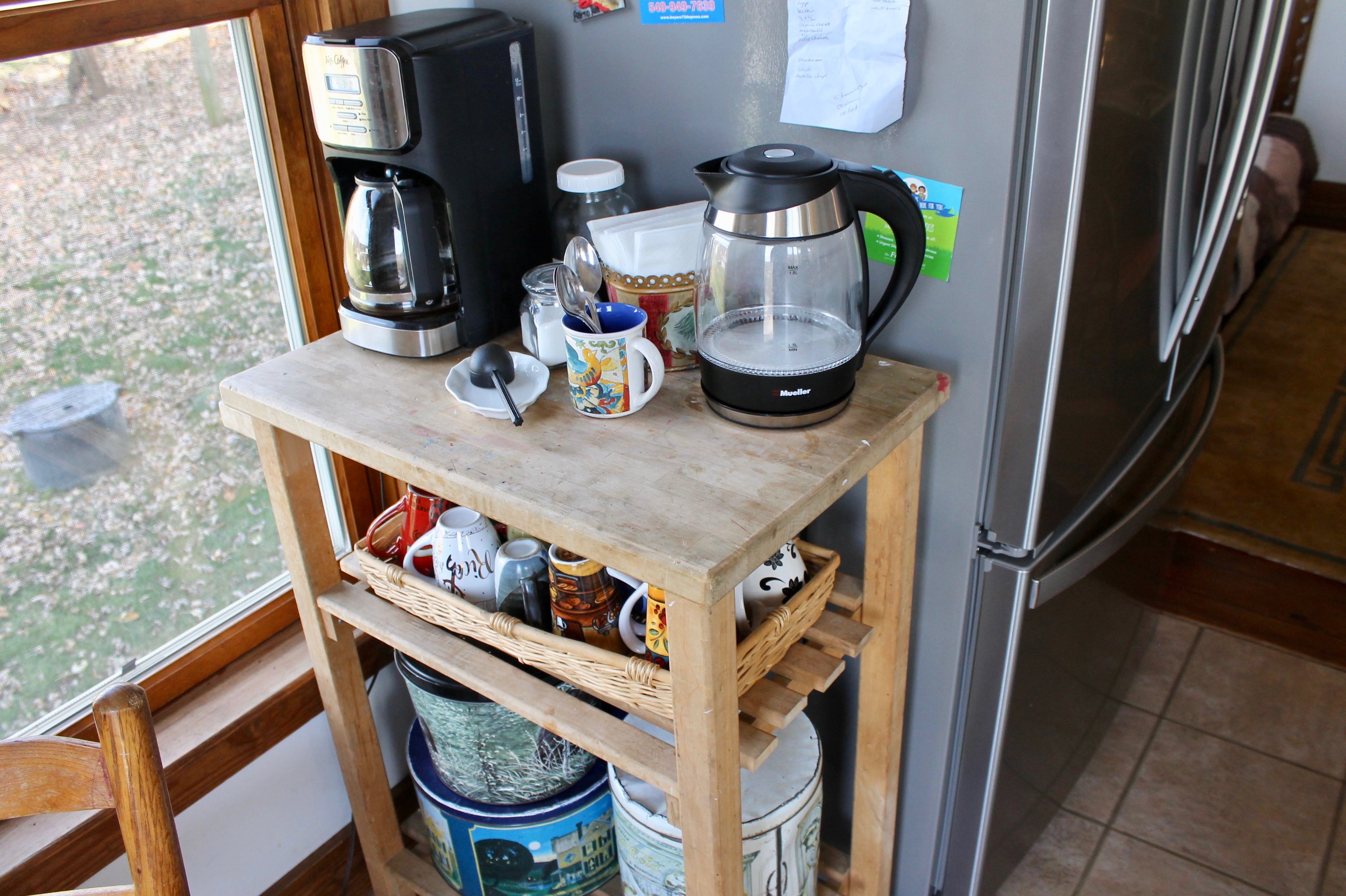 Besides, my dad’s probably going to steal it back sooner or later….