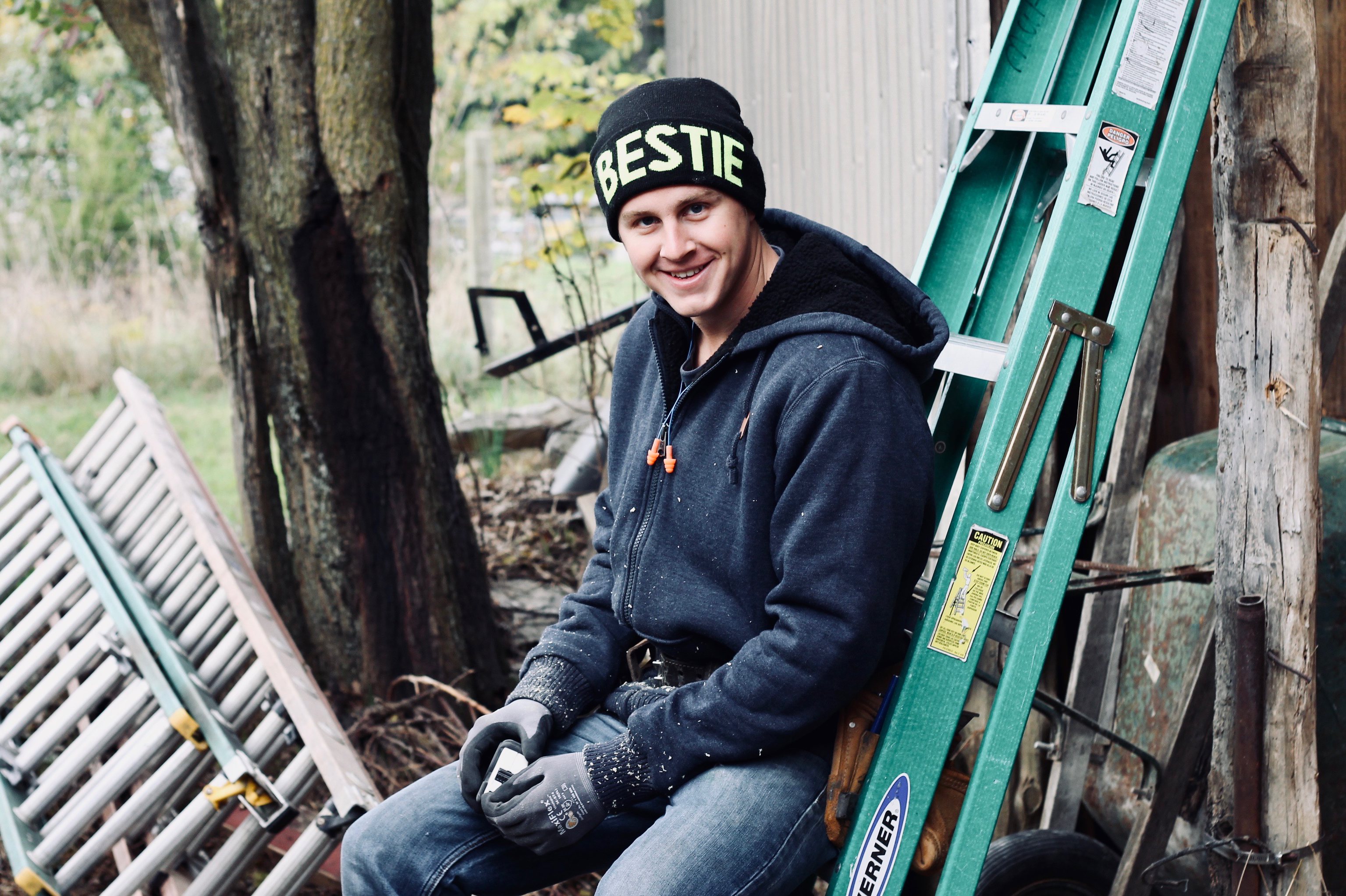 Two whole decades with this boy, lived and done. Not in the blink of an eye, mind you (I’d never say that) but gone all the same. I am not prone to melancholy — I don’t long to turn back the clock (horrors!) or stop time (never!) — so the throbbing ache I feel pulls me up short.

And, compounding my heart-twisting is this: His aging marks mine. For each new milestone he reaches, I’m knocked, too, into new territory, a place I’m not altogether sure I want to be. This, I guess, is the gift of the firstborn. 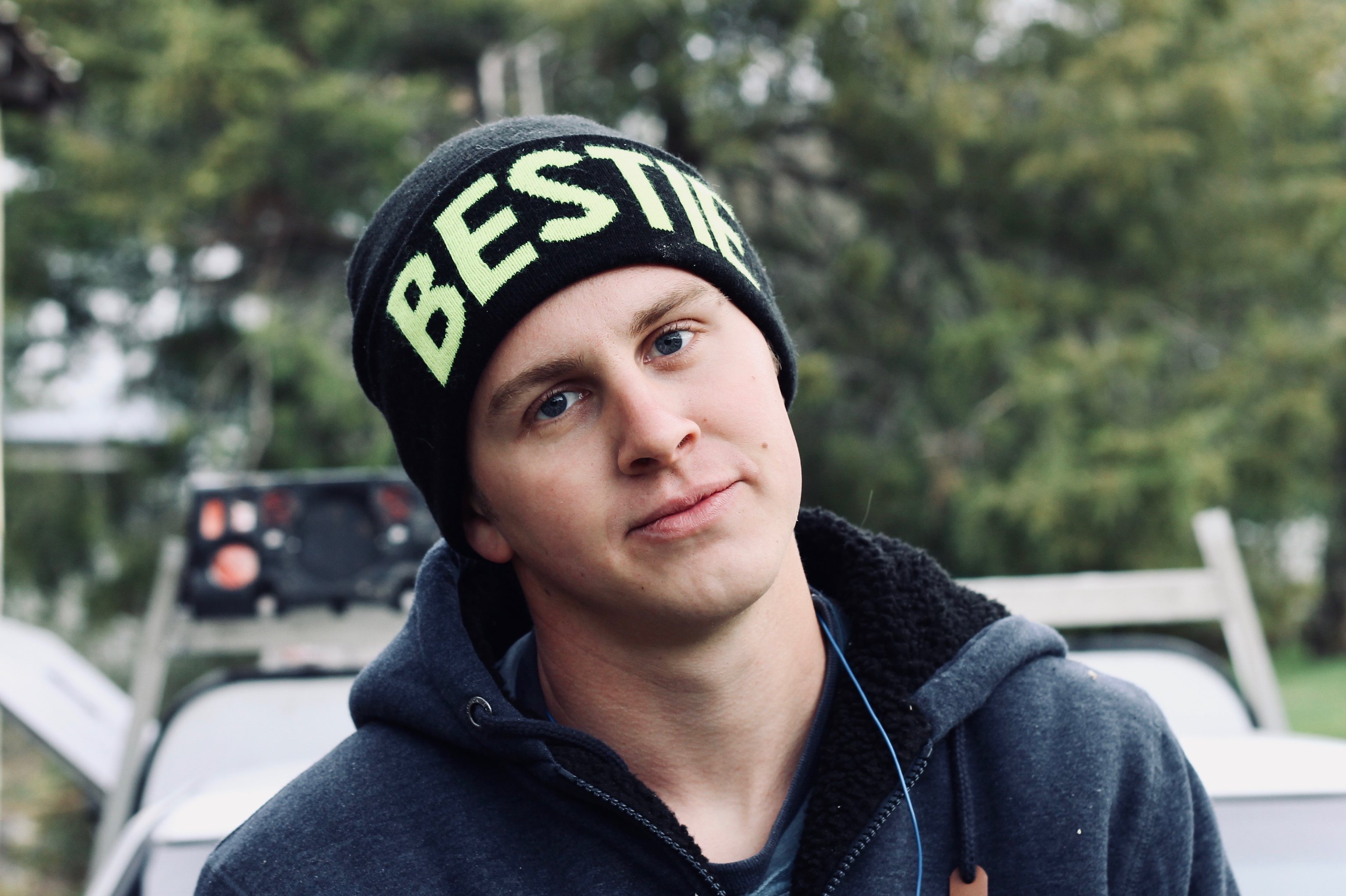 Not to be a killjoy! I am happy, truly. We’re so lucky, of course we are. Everything is moving forward as it should, as we want it to. 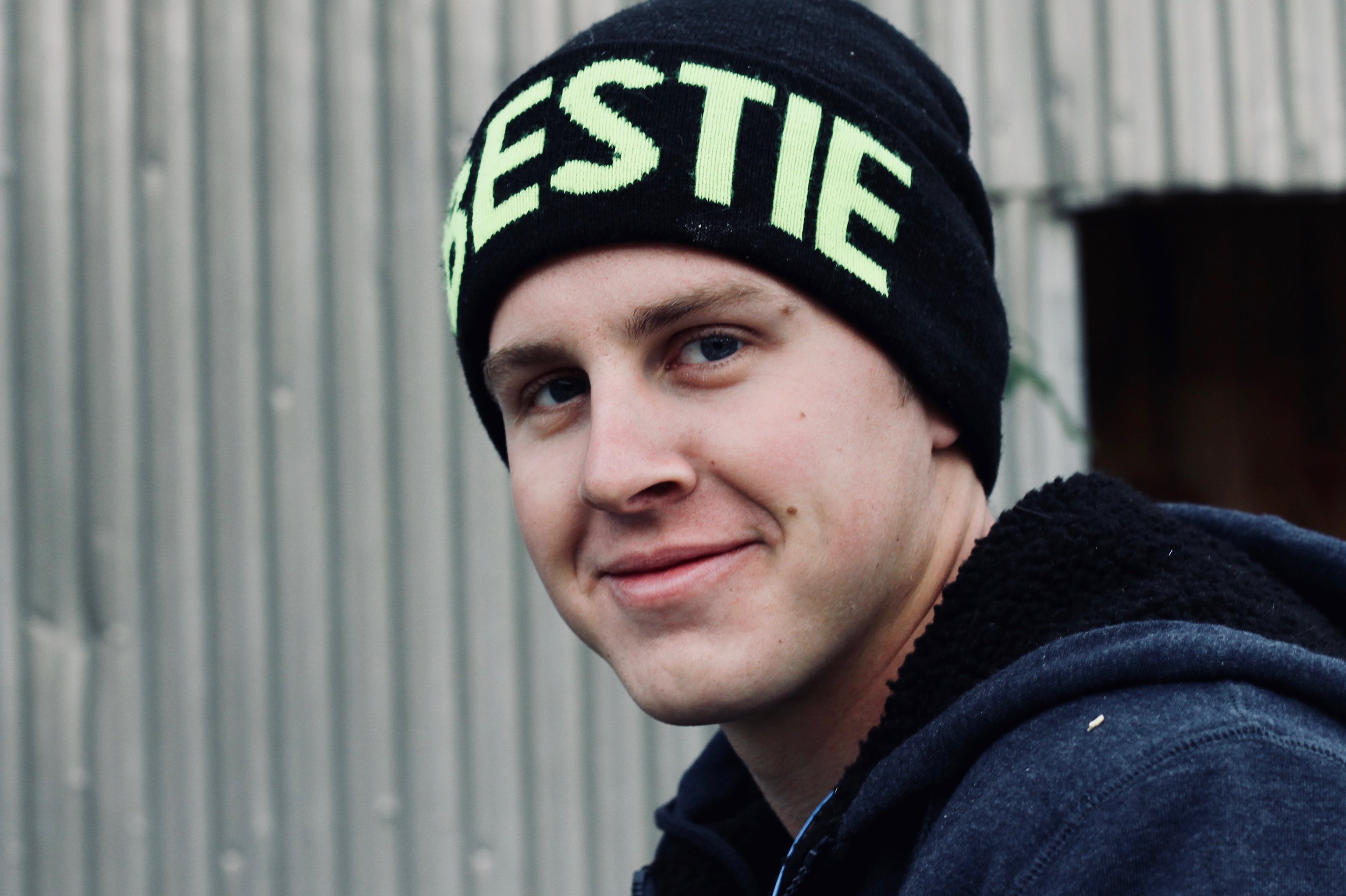 For his cake, I decided to go with snowboarding, since that’s what he loves. Well, snowboarding and all things fancy cars (which always prompts me to fuss, Can you possibly be any more of a young male stereotype?), but snowboarding, unlike a Ferrari, is actually attainable.

So! It’d be a cake mountain, a snowboarding person, the works.

However, since I couldn’t find any instructions or copy-worthy models, I was forced to venture out on my own which, since I’m horrible at puzzles, taking directions, map reading, geometry, or anything that requires spatial imaginings was stress inducing. I may have even lost a bit of sleep (until I realized that I could use my pillow as a model, smashing in slopes with the side of my hand to get a feel for how it might work).

In the midst of stressing, I made chocolate (his request) cakes, four of them, because the least I could do was stack cake to make a mountain, right? And then I roped in the younger three kids — they are all better at “seeing” things than I am — and together we made it work, more or less.

We first stacked and trimmed the cakes to get a general idea of our mountain. Then we numbered the cakes and de-assembled them so we could simple syrup them with a coffee simple syrup. 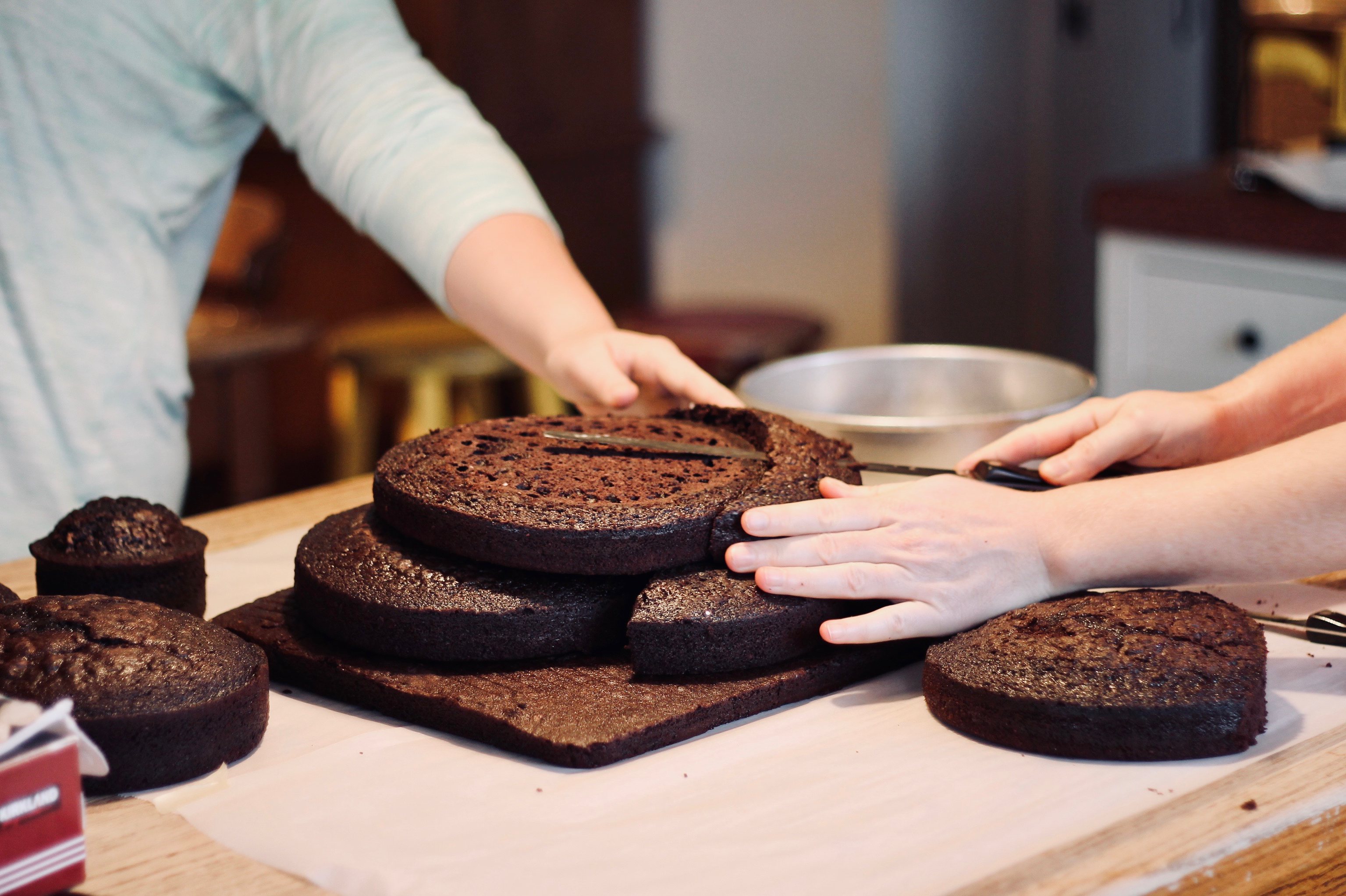 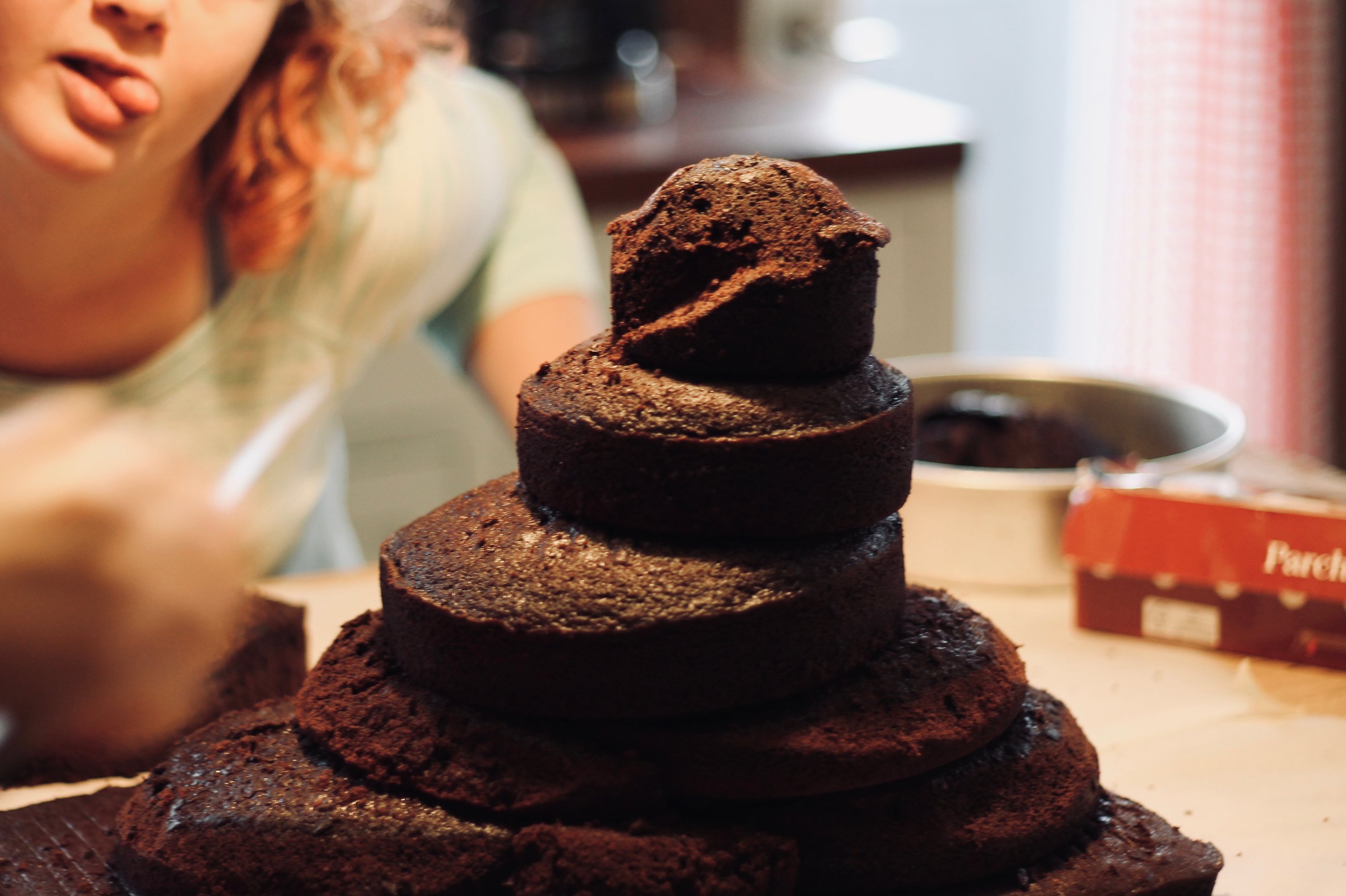 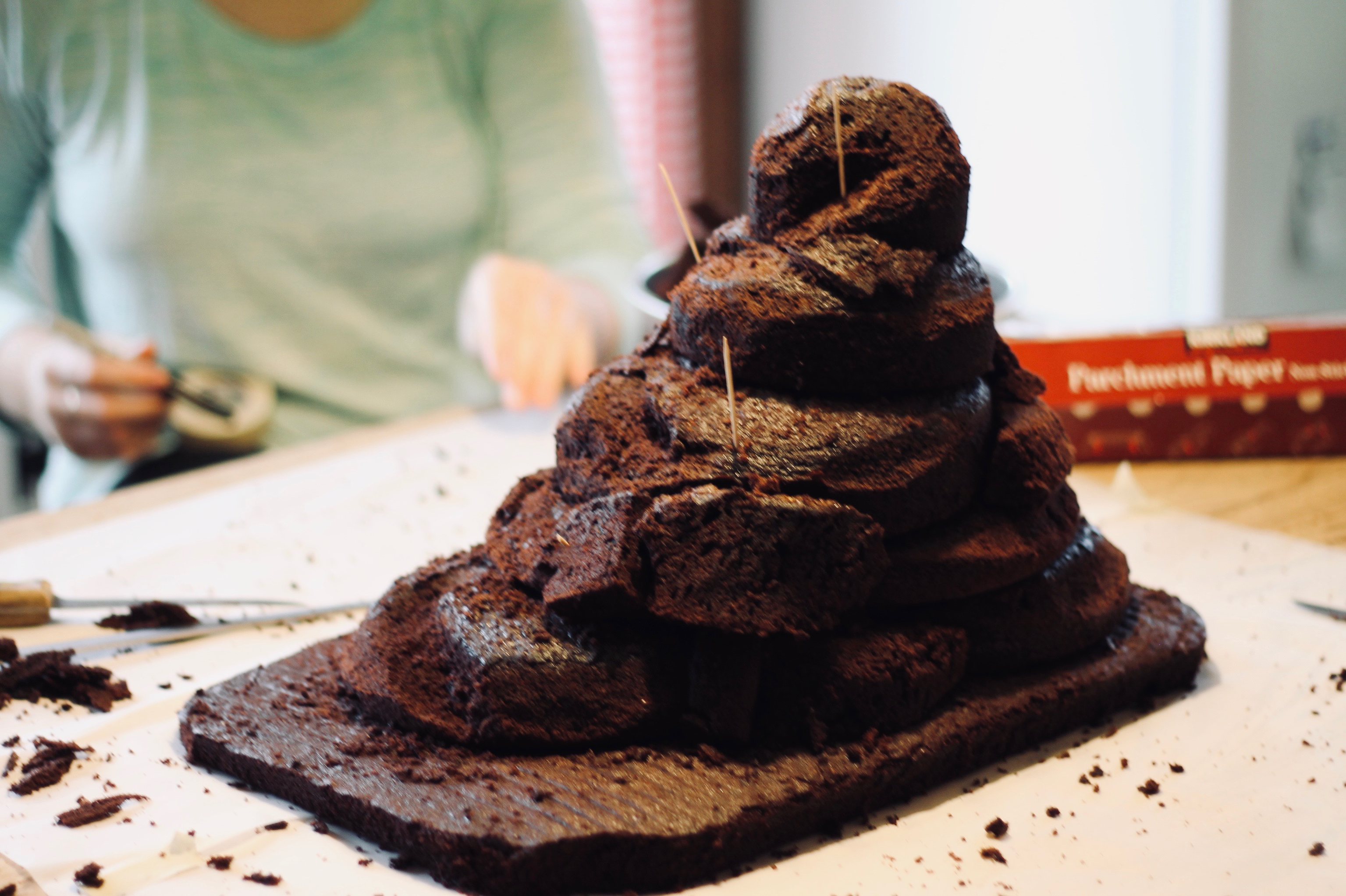 We restacked them, spreading coffee buttercream between each layer, and then I dirty iced them with Italian meringue buttercream, smooshing on more cake wherever I needed bumps. When the mountain was finally iced to my satisfaction, I swirled in a little light blue frosting on the vertical spots, for shadowing. 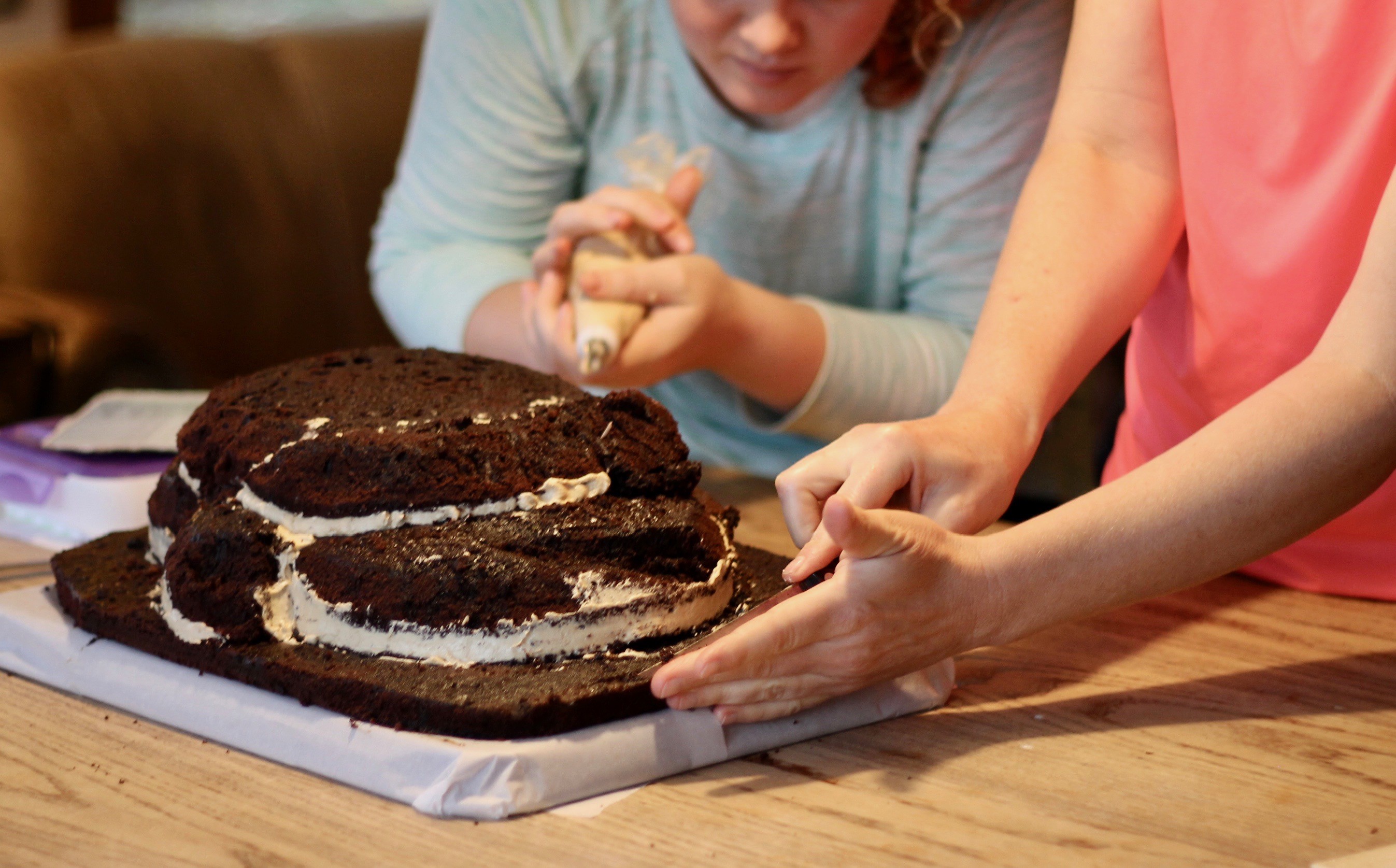 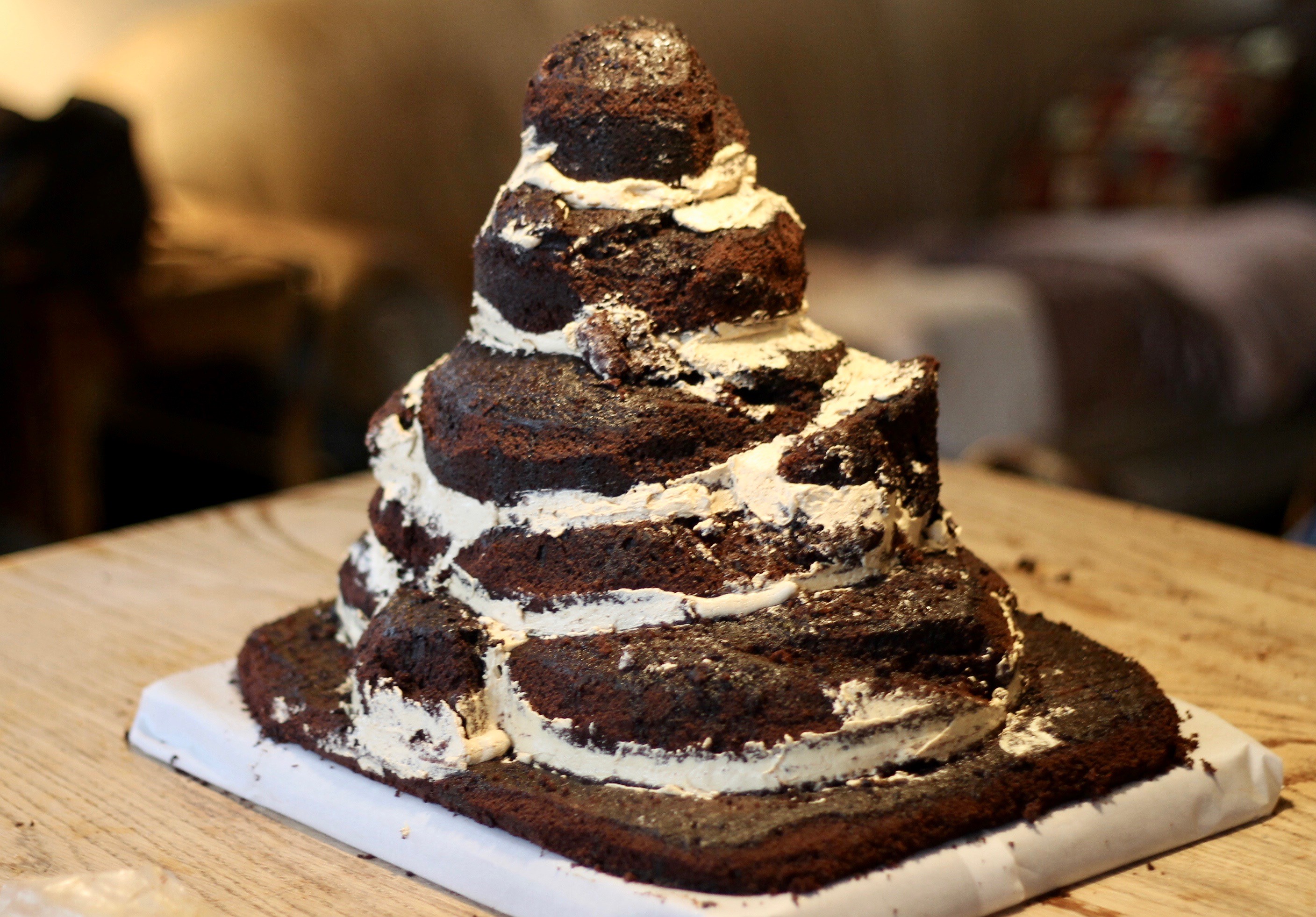 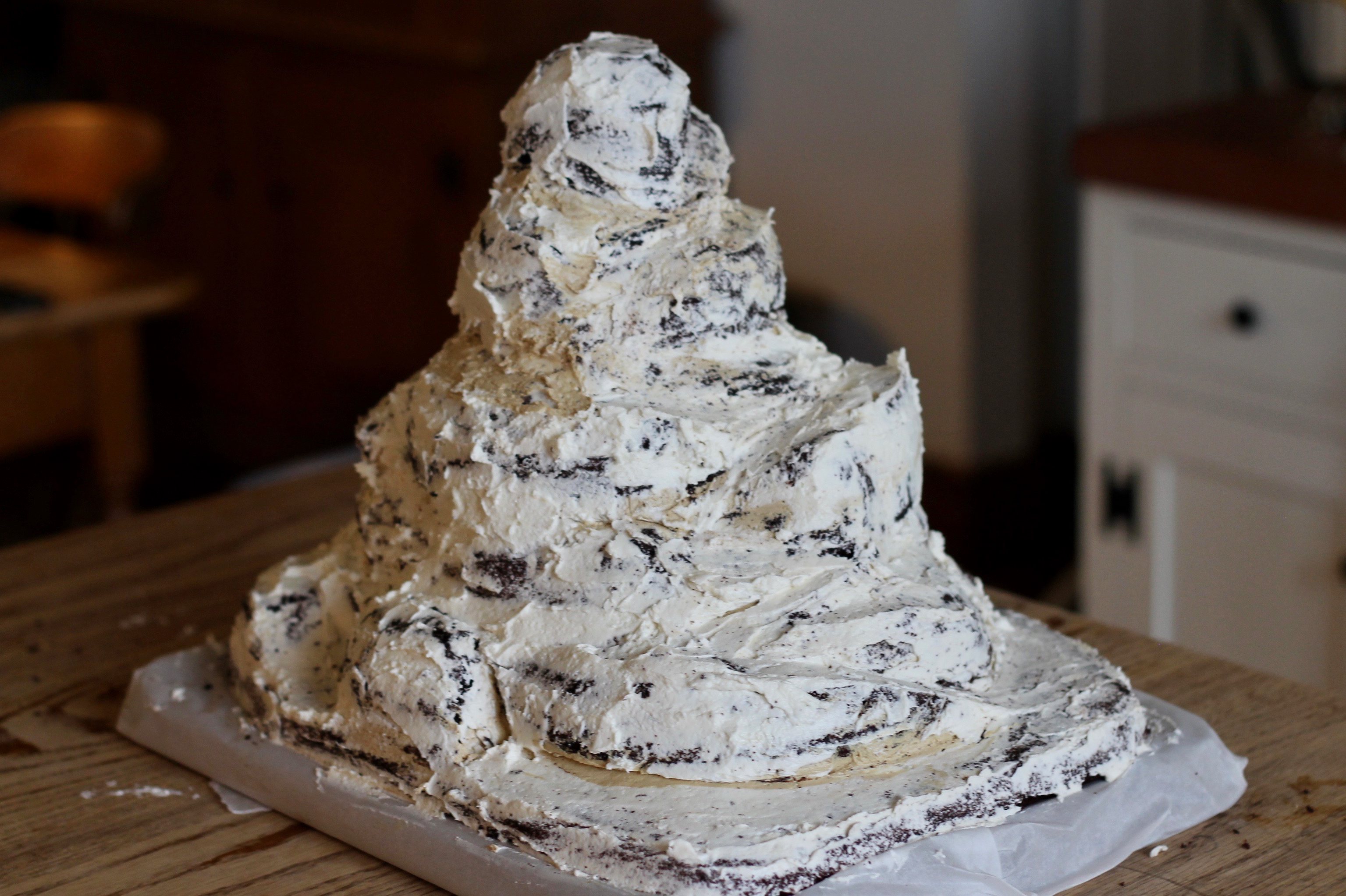 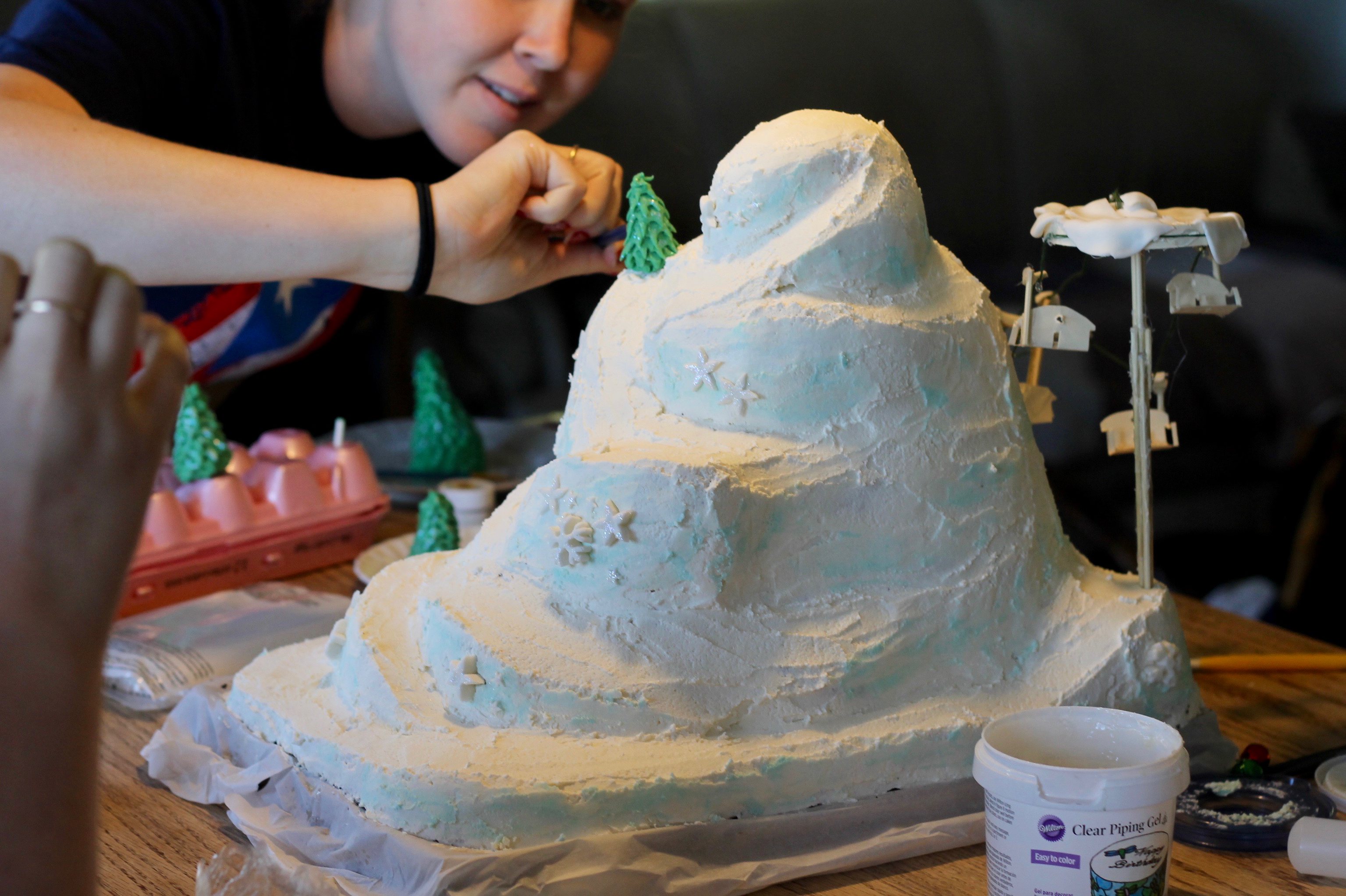 Then the fun part: fondant!

I never thought I’d say that. I am not keen on finicky decorations, but there’s something about fondant. It’s like playdough, but funner. It was meditative almost, all the rolling and shaping and gluing and sparkling, or it would have been if the kids didn’t fight nonstop. 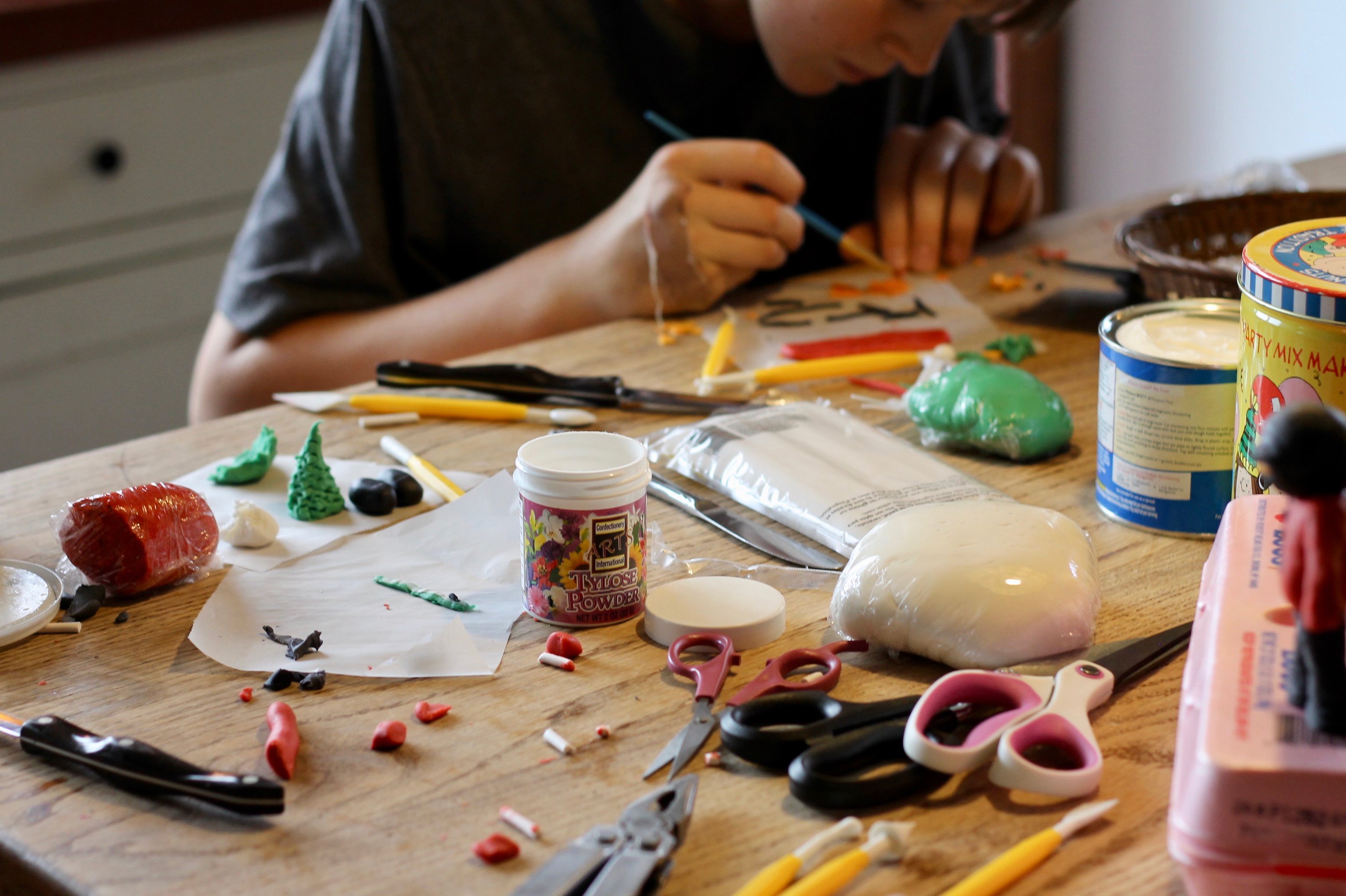 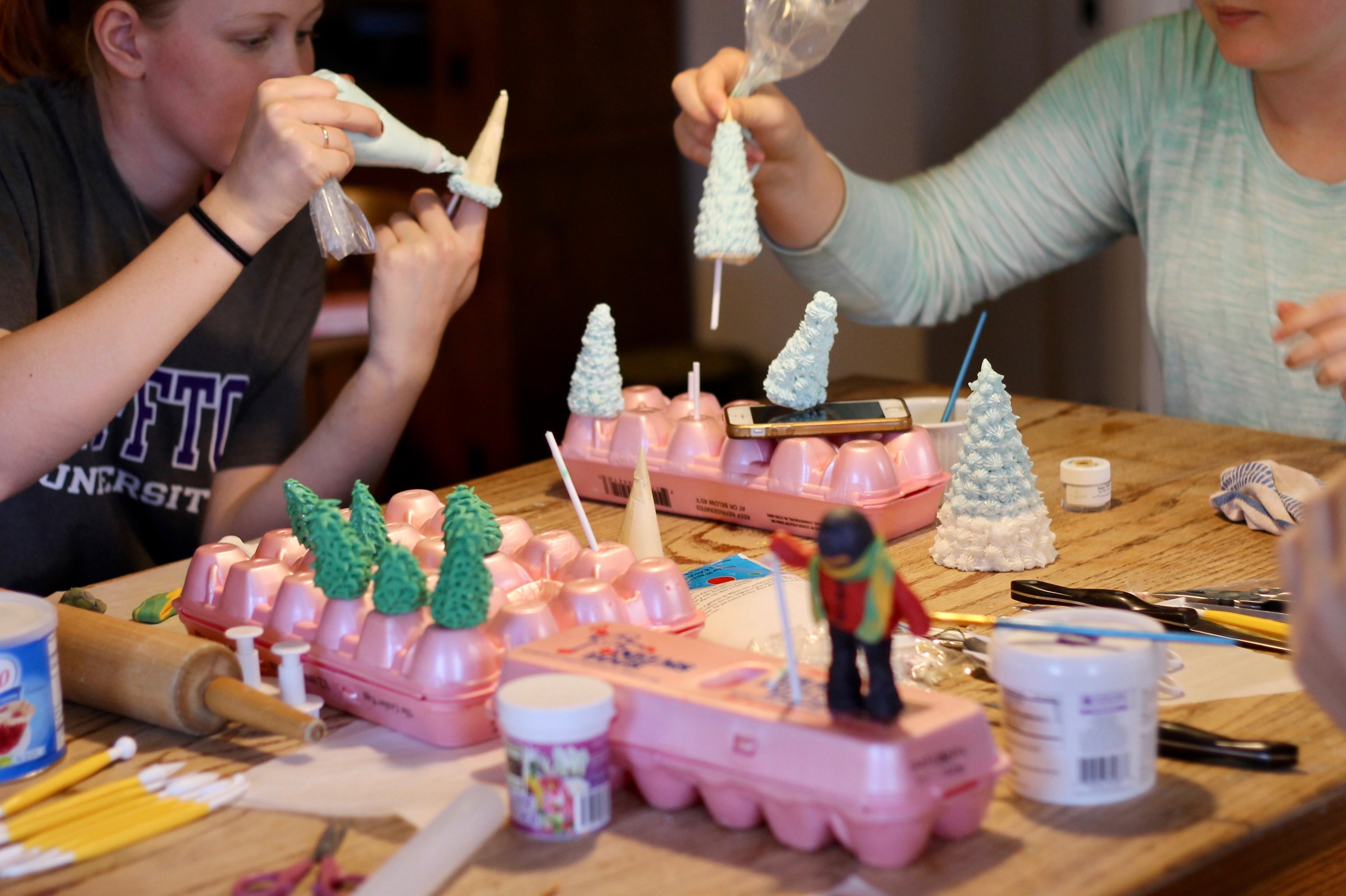 We made all sorts of things: stars, a snowboard and person, gum paste evergreens, snowmen, scarves, a snow fort with snowballs, a sign, etc. My younger son built a ski lift out of toothpicks and wood and paper folders, and he made paper cones that the girls covered in blue buttercream for a second species of evergreen. For the final touch, sanding sugar for snow. 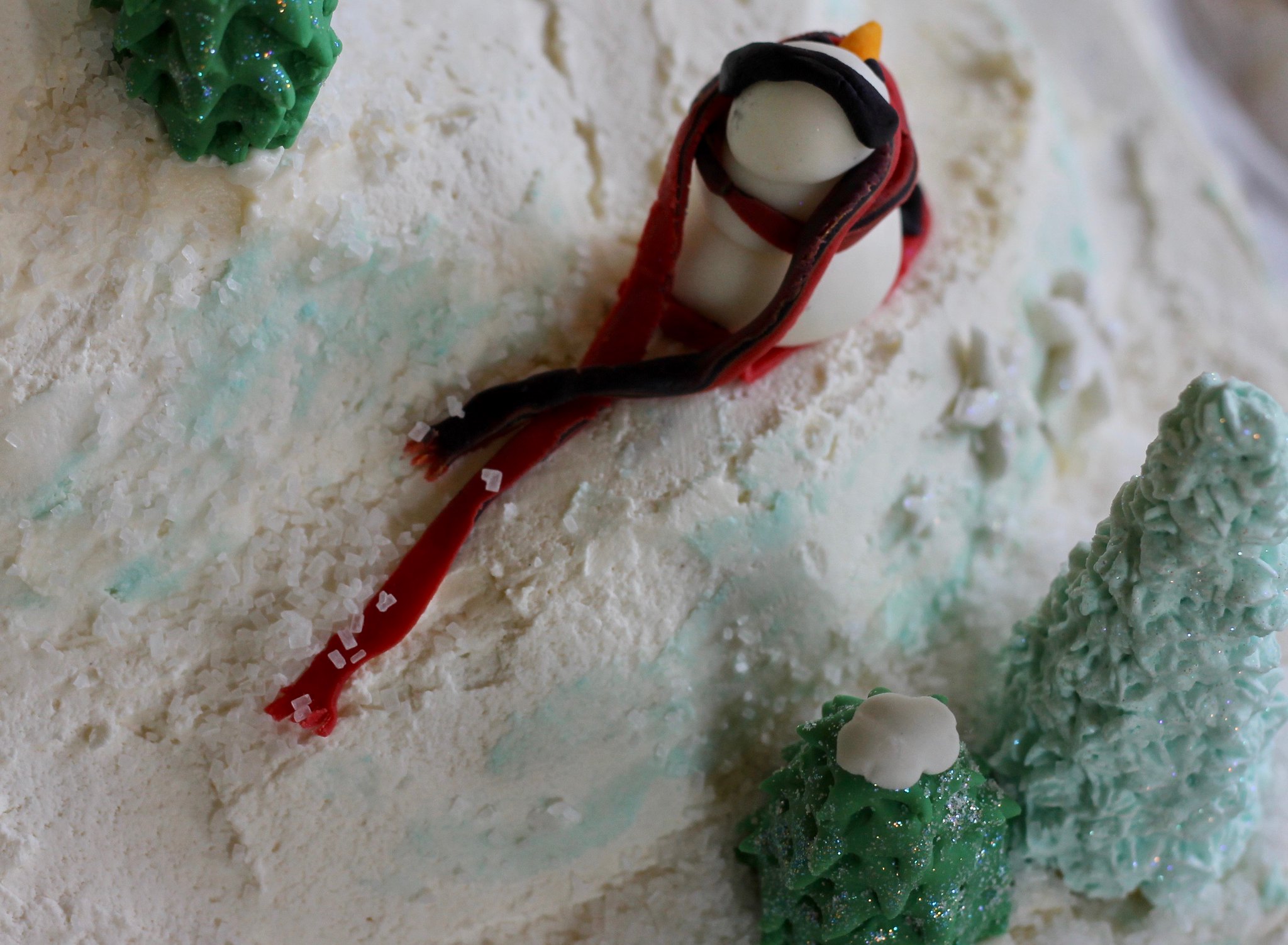 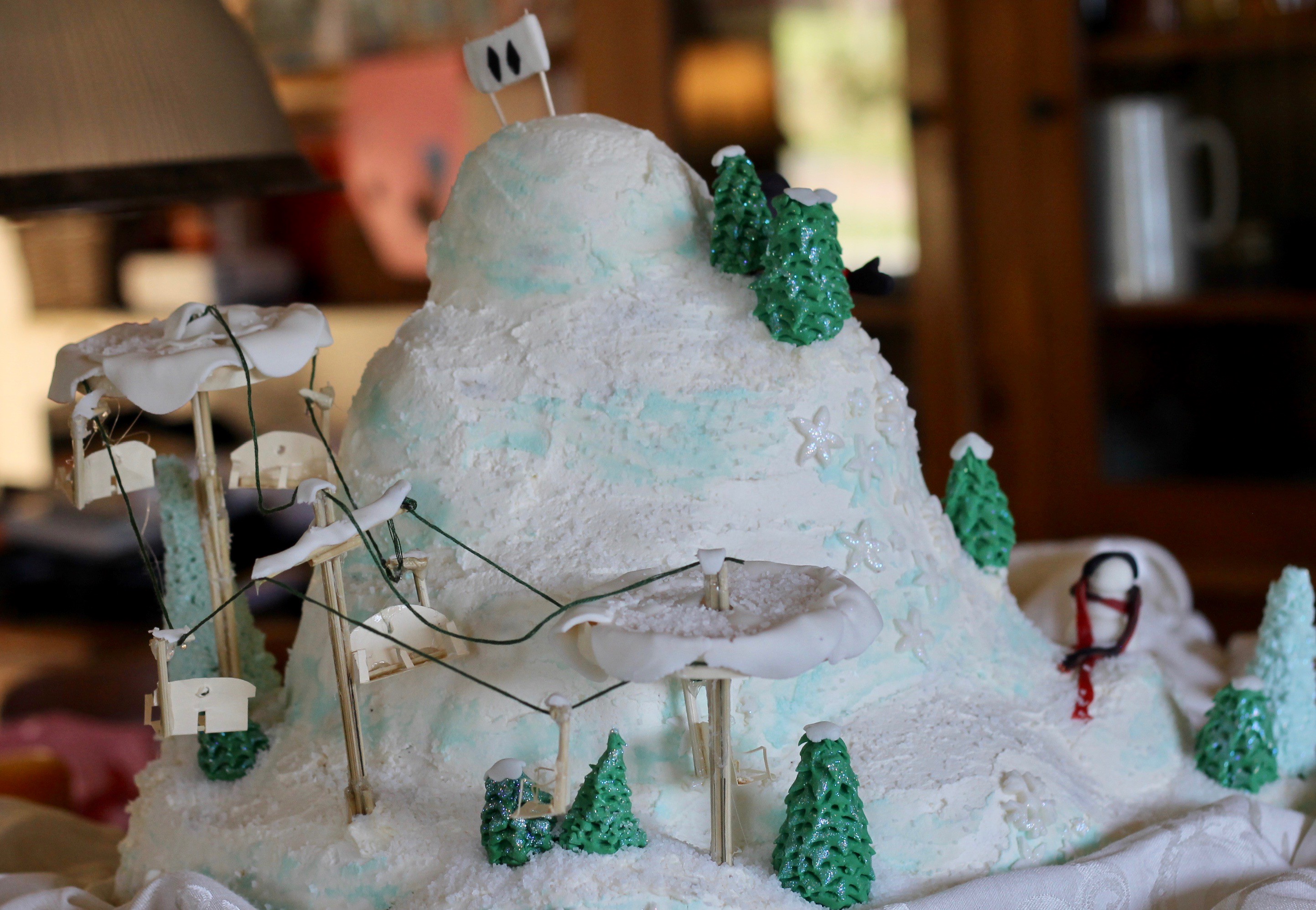 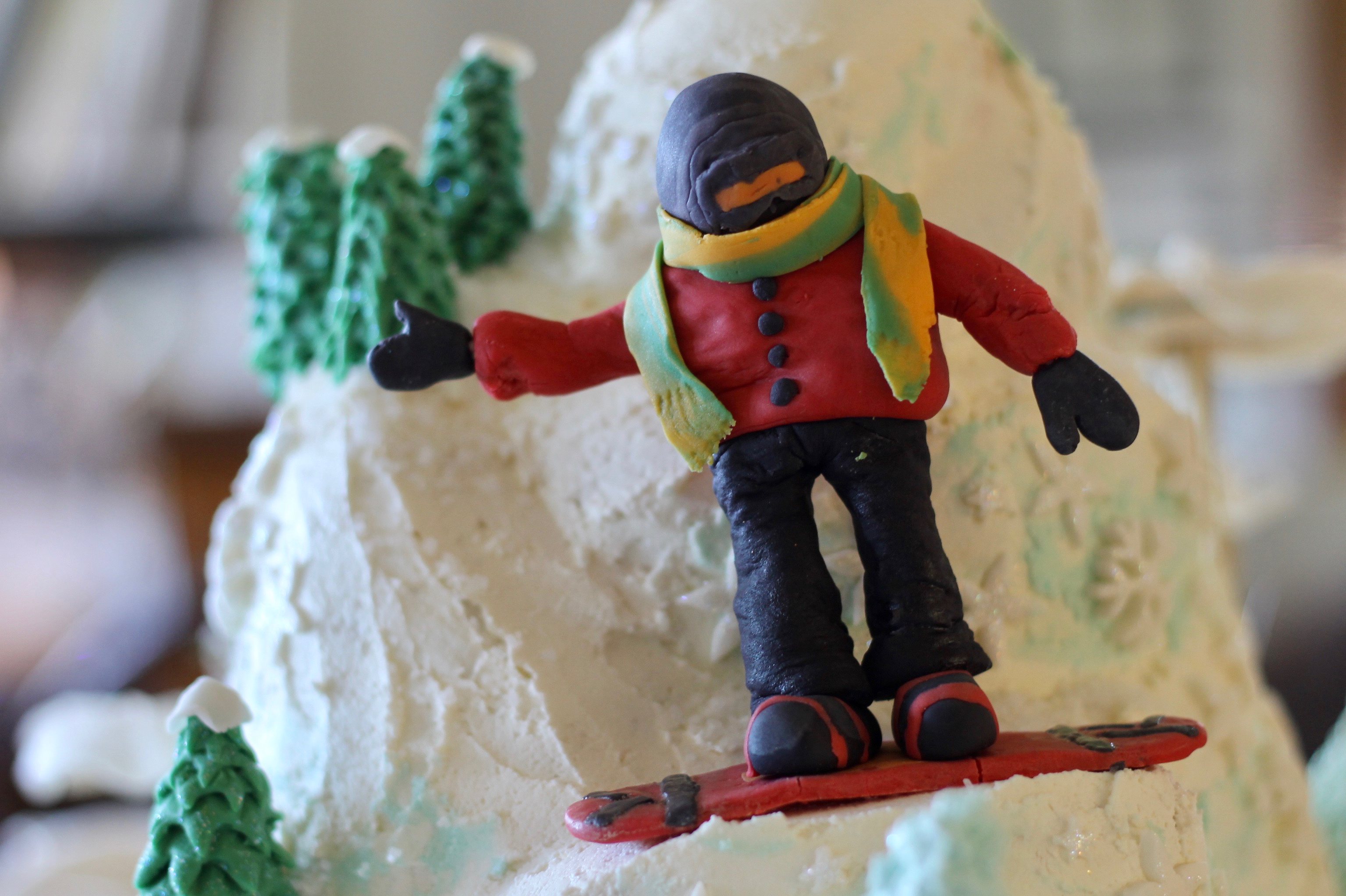 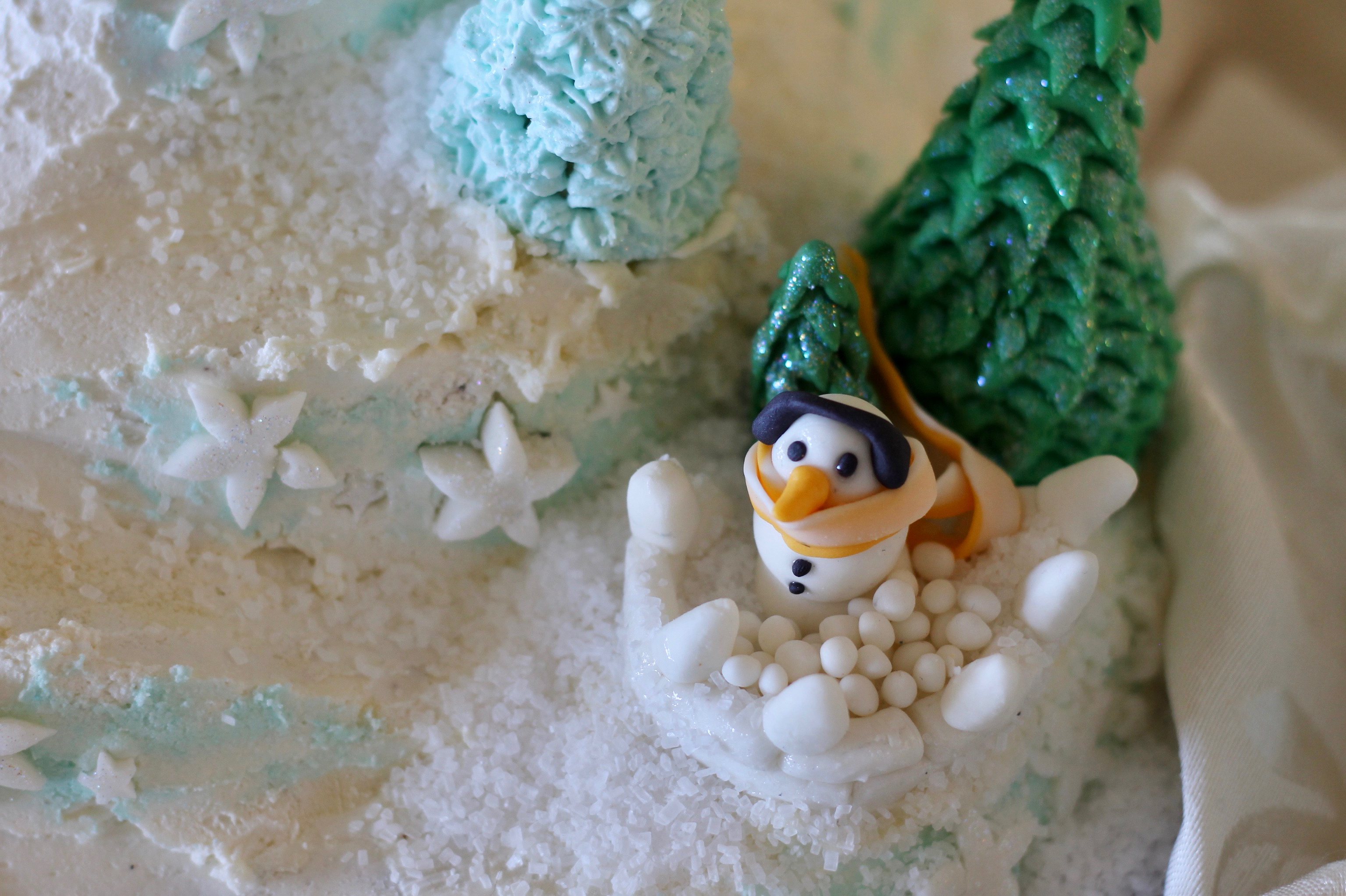 A list of the things I bought:
Tylose powder, to turn fondant into gum paste
A big bottle of glycerin, because I’m sick of buying tiny overpriced bottles at the store
Lollipop sticks, to anchor the fondant decorations to the cake
Gel colors
Fondant cutters, which were more useful than I thought they’d be, especially the rolling pin
White glitter dust, to make the trees and snowflakes sparkle
Sanding sugar, for snow 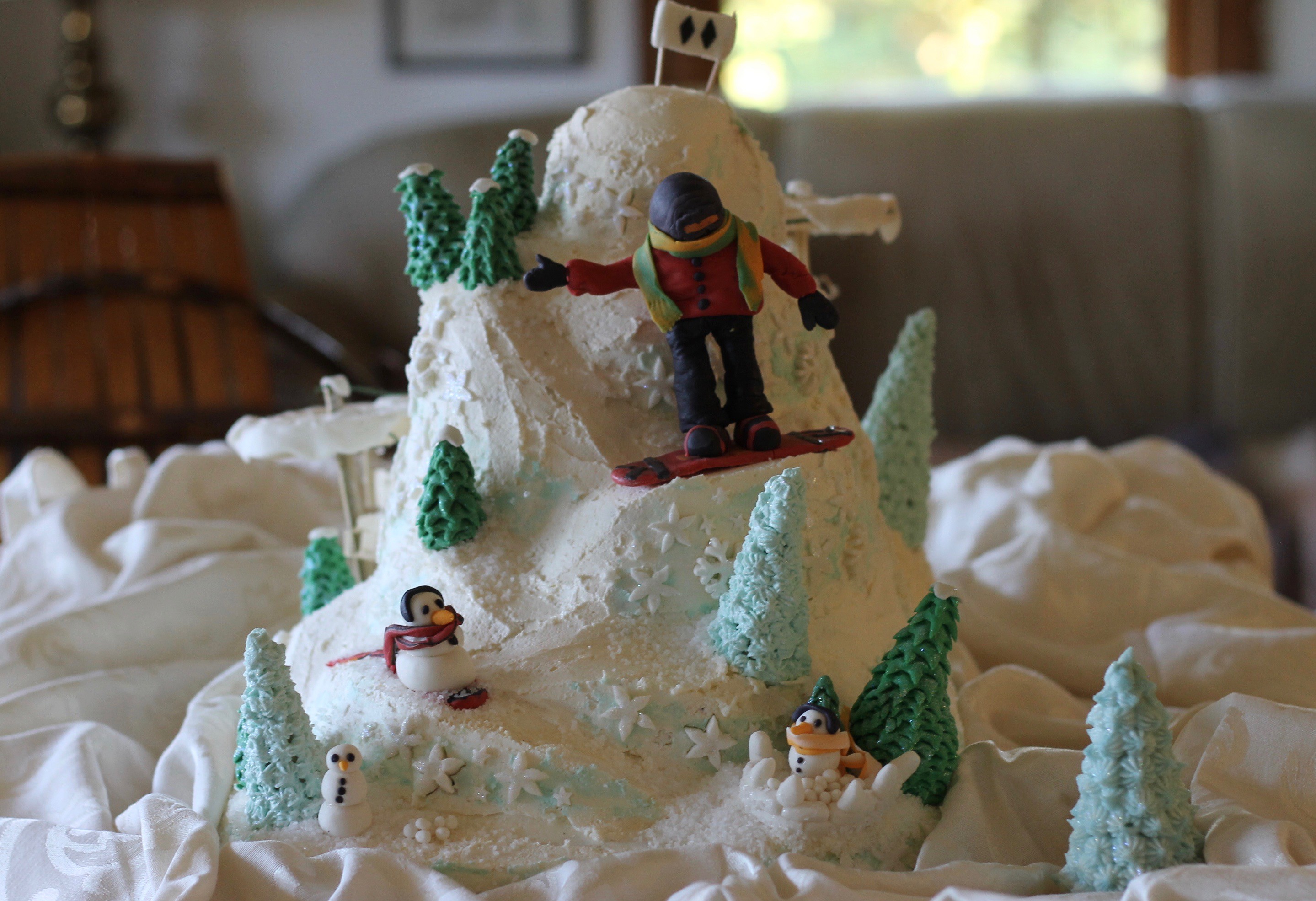 The beast took two days to assemble (not counting the days spent making buttercream and cakes), and I washed the kitchen floor three times. It was A Production Like None Other.

And then it was time to eat it! A cake that size definitely needs a game plan but I hadn’t thought beyond the making of it. So we ate our slices and then, slightly ill from all that sugar, I let the kids carve tunnels into the mountain before hacking it into pieces (I seriously didn’t even care) that I wrapped in plastic and trundled down to the freezer. 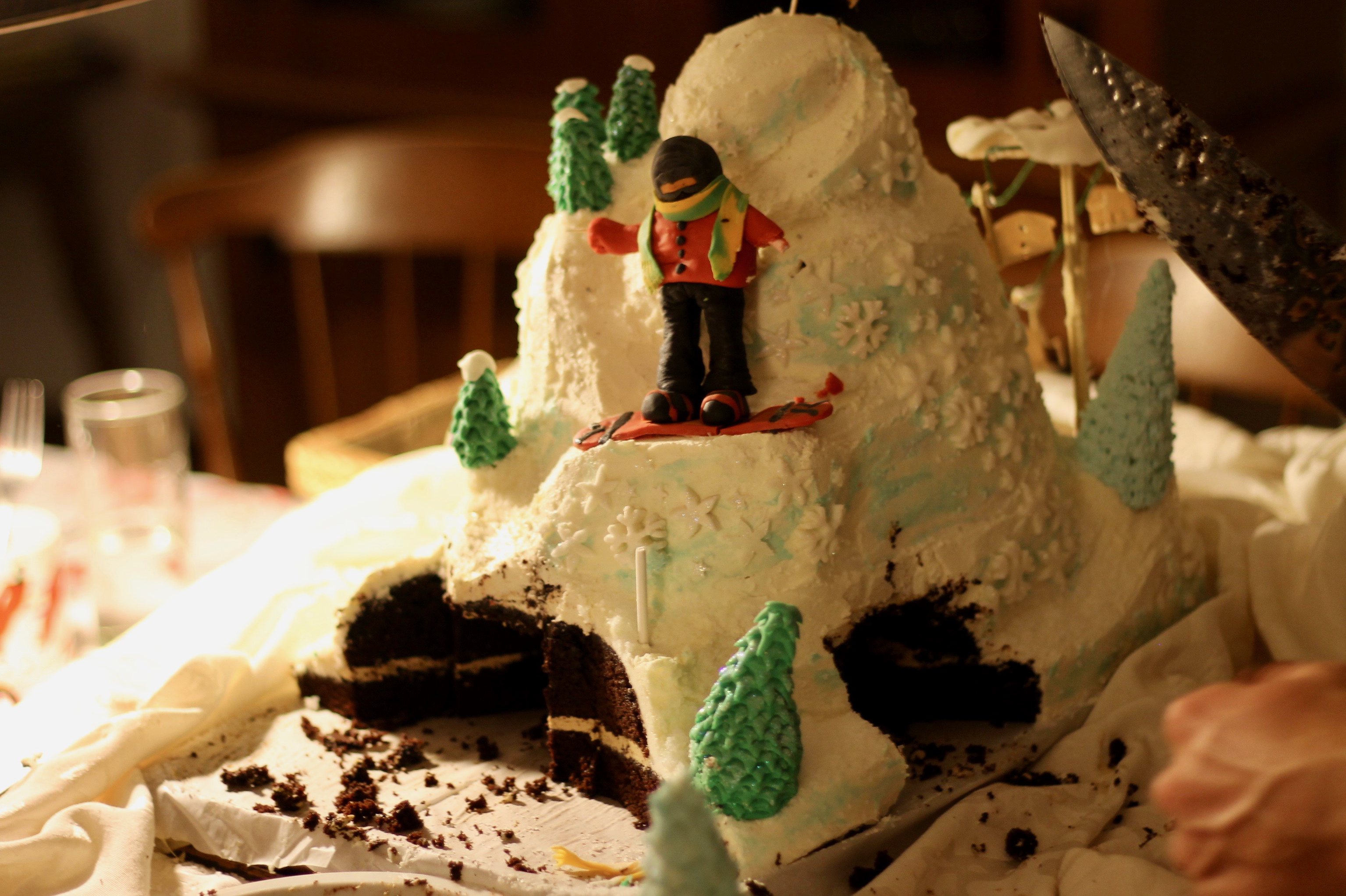 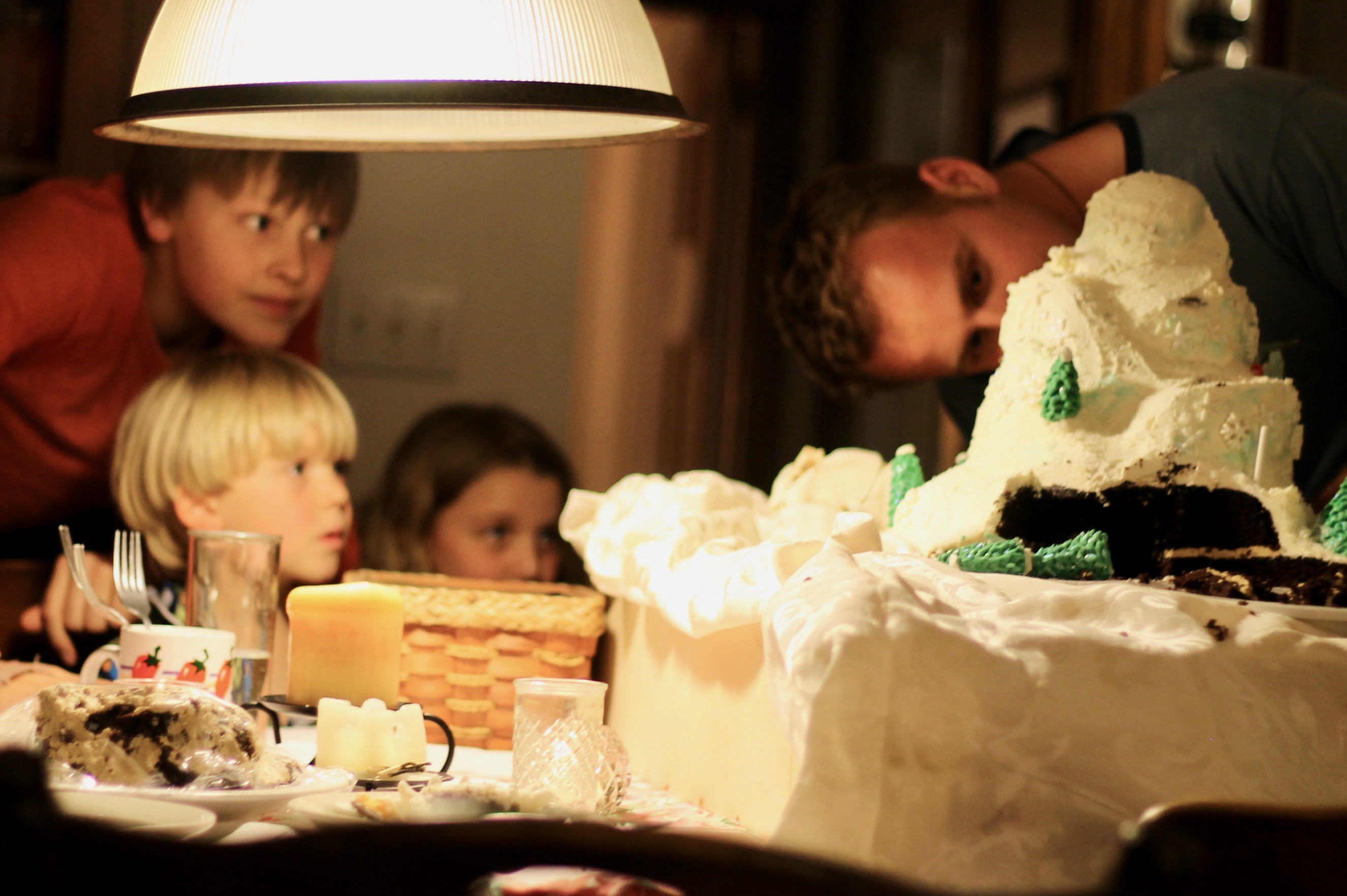 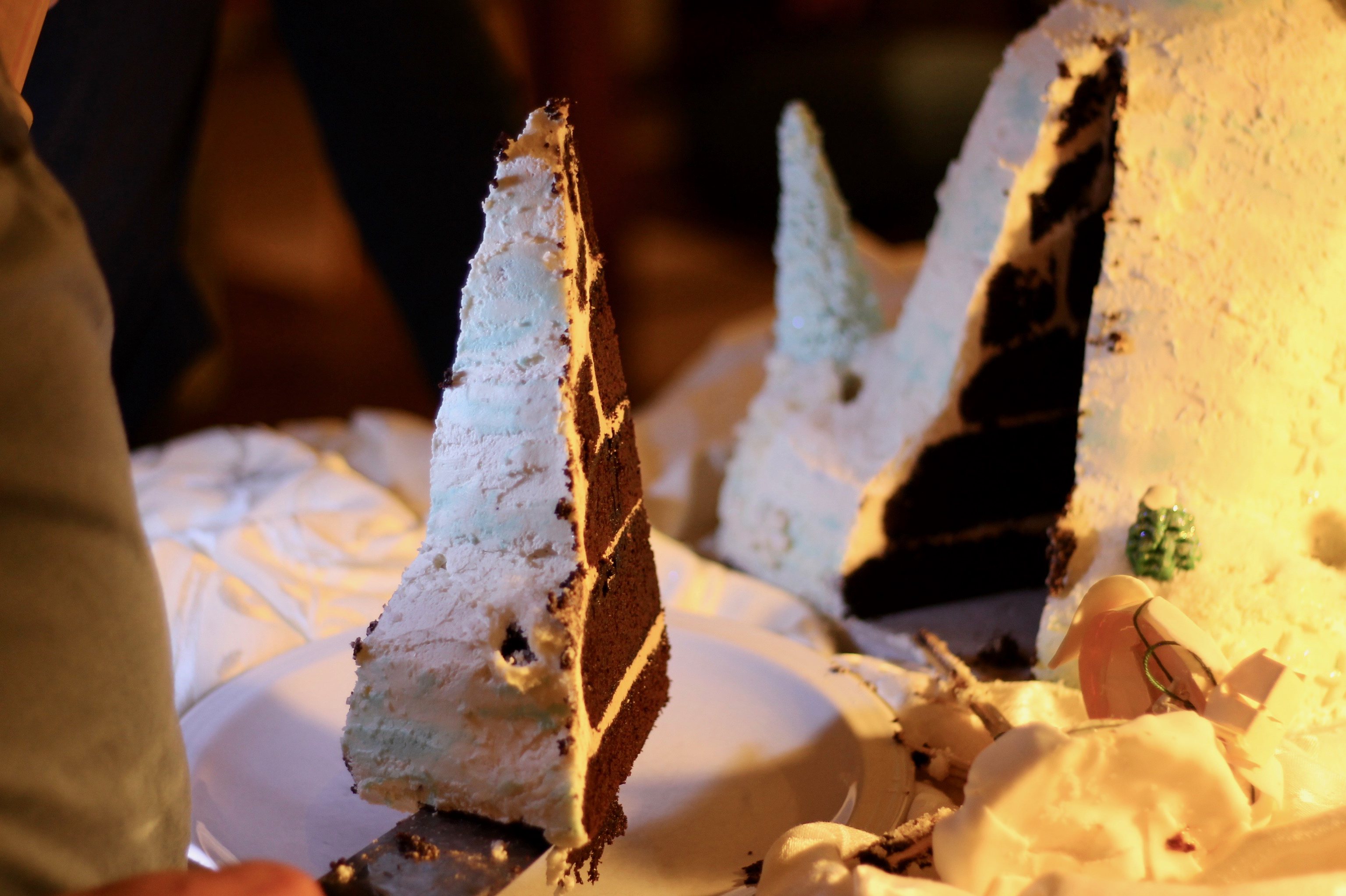 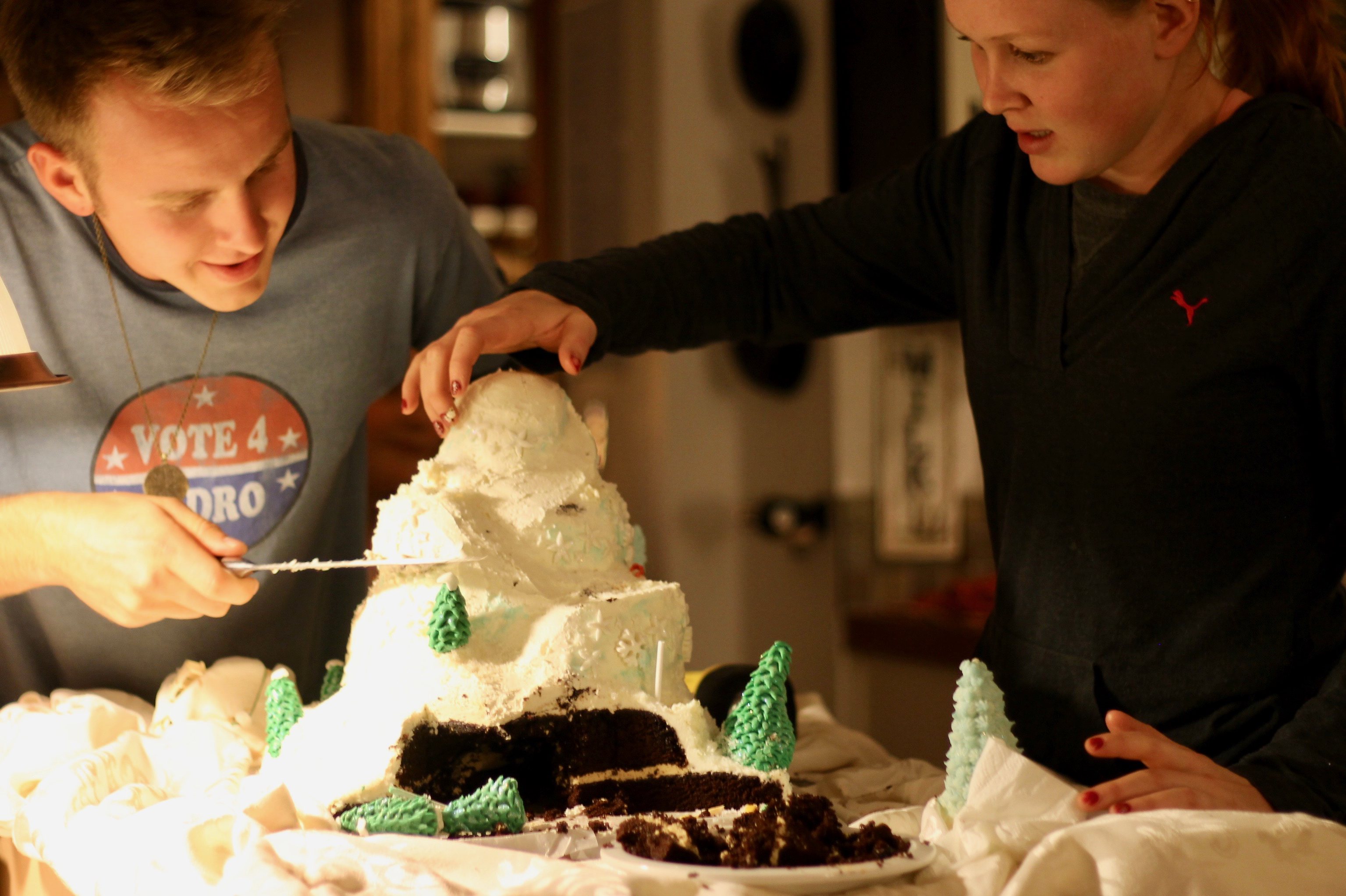 Out of sight, out of mind, whew.

Anyone want some cake?

This same time, years previous: nourishment, letting go, growing it out, reading-and-ice-cream evenings, our cracking whip, random, in the garden.