Ever since I posted that recipe for croissants, I have been steadily chipping away, familiarizing myself with the process, experimenting with different variations, growing ever more comfortable and self-assured. 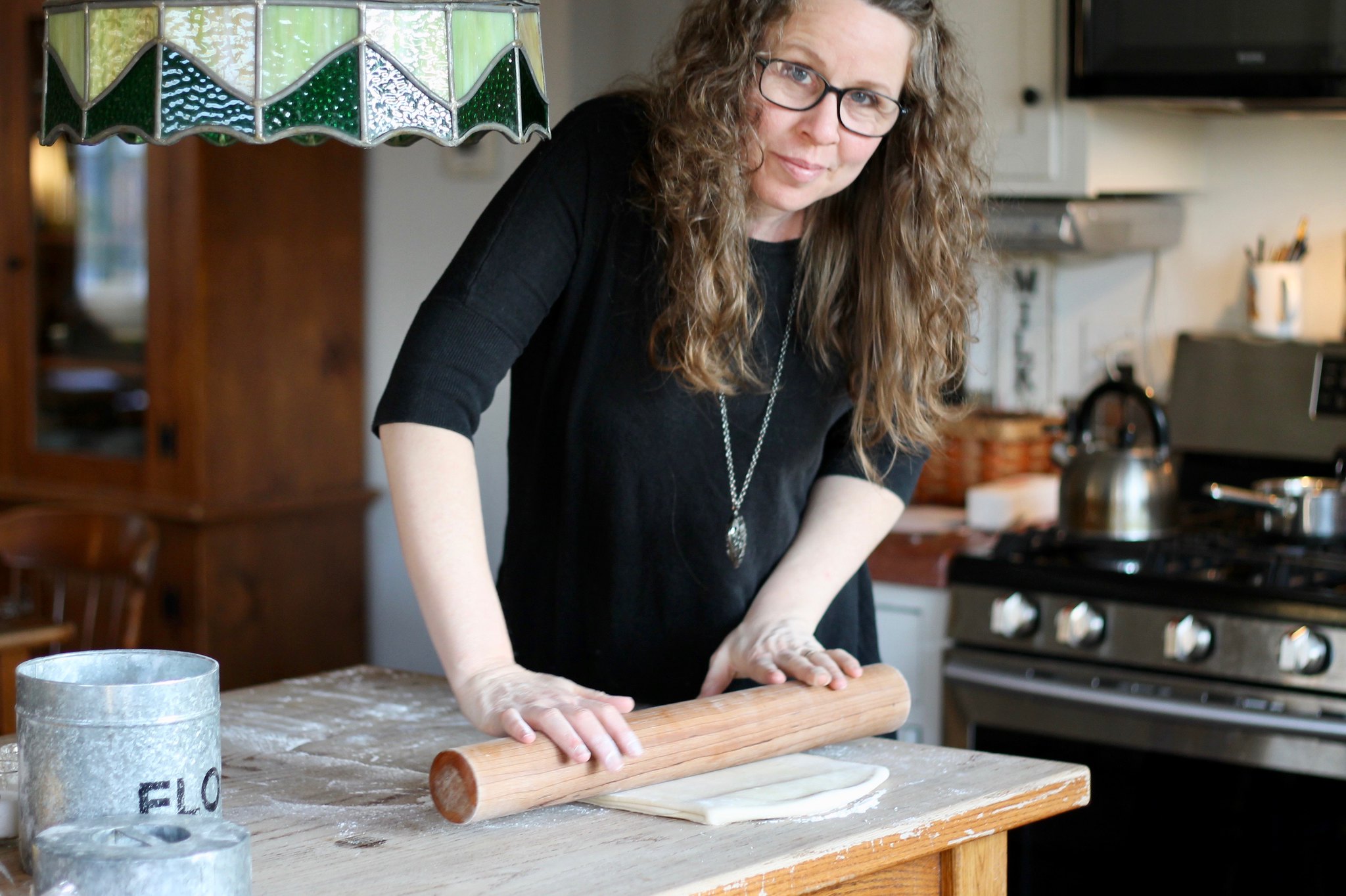 I’m still not all the way there, of course — that will take months — but I am much, much, much more confident. 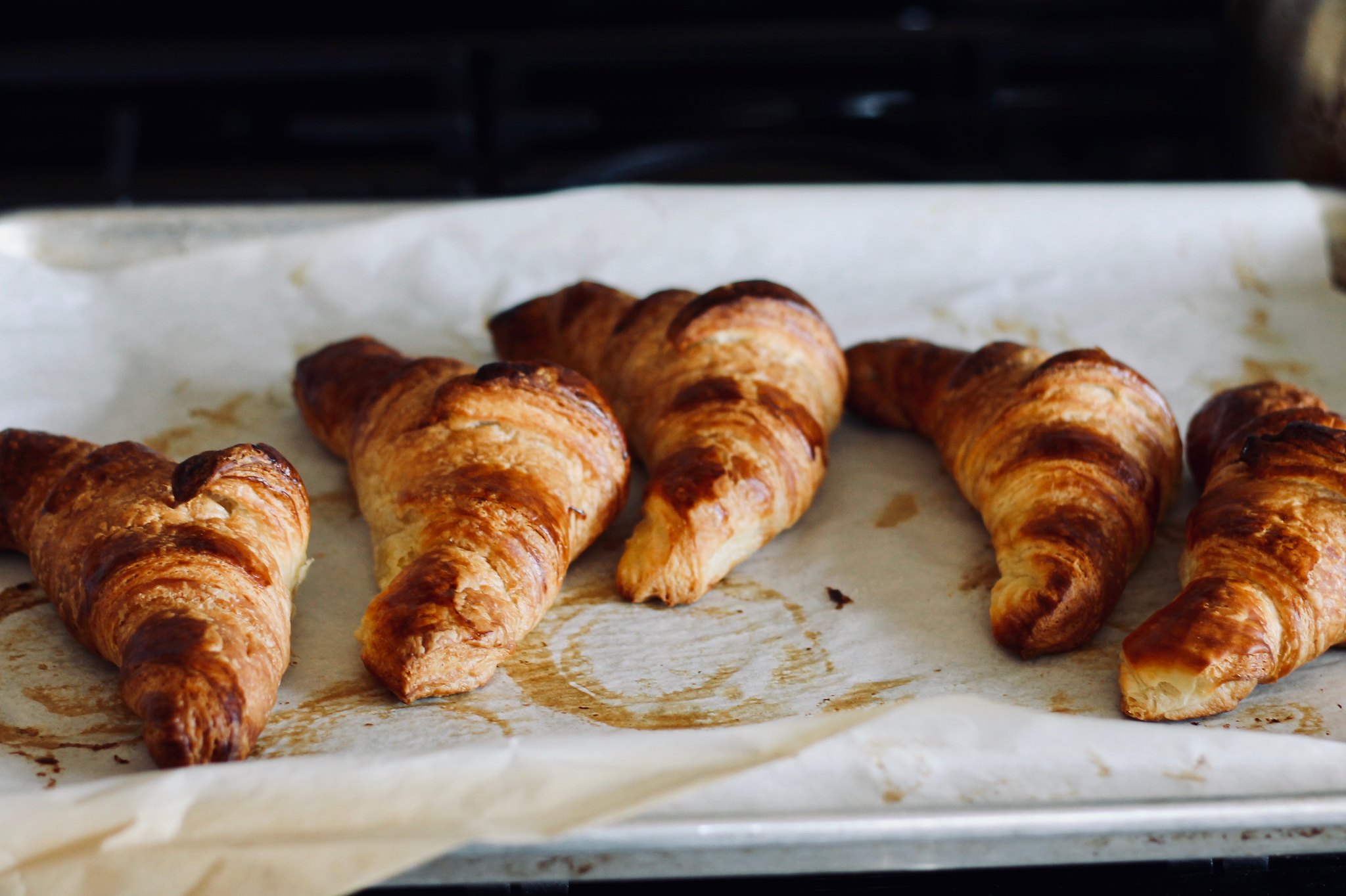 I mean, just look at these babies! ARE THEY NOT SPECTACULAR?!?!?!?! 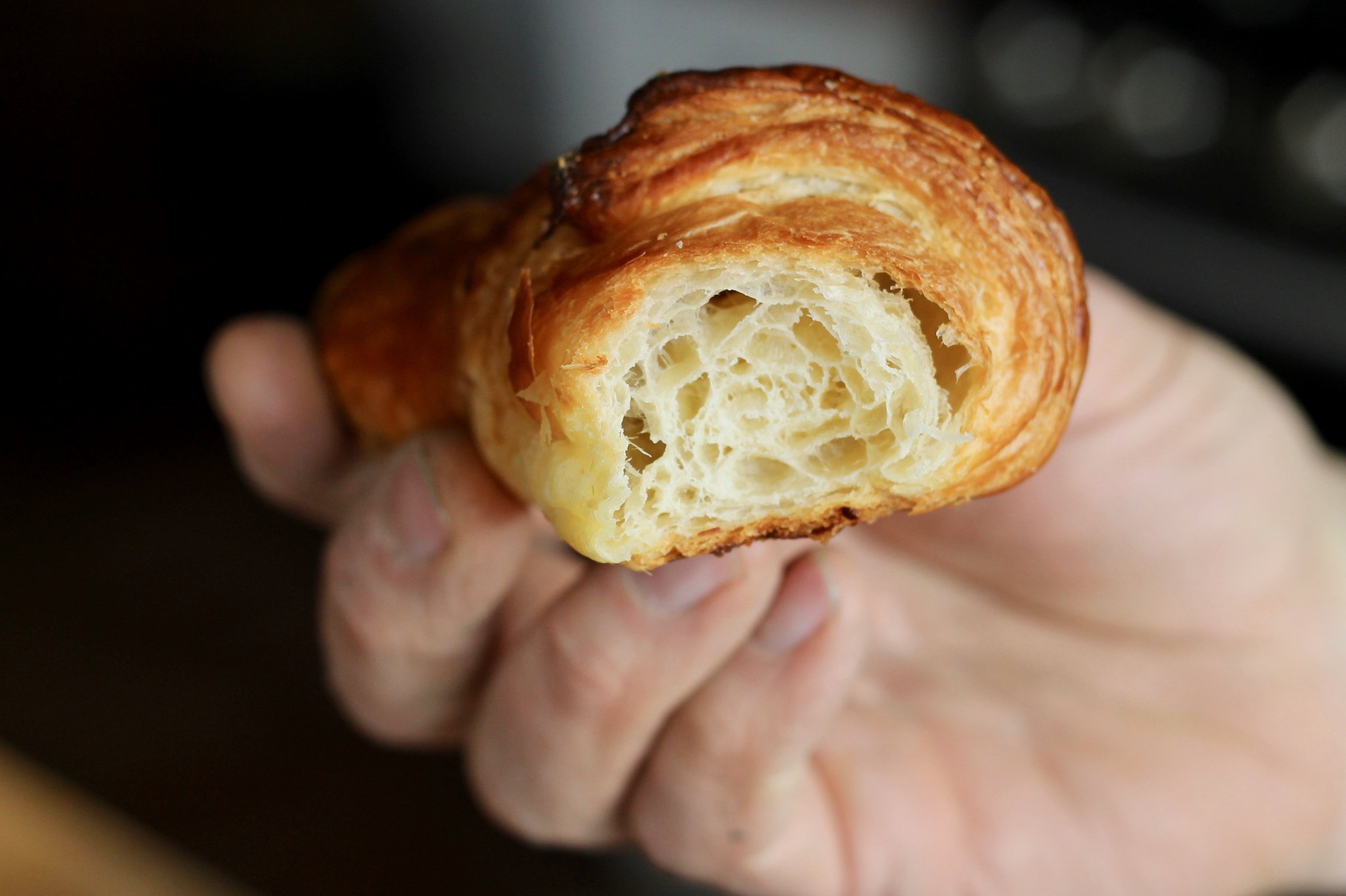 (In case you were wondering, the answer is, “Yes, Jennifer. Why yes, they are.”)

In fact, I do believe I have crossed the line from experimental puff pastry baker to The Real Deal. The proof? I keep a couple pounds of Kerrygold butter in the fridge at all times, just for puff pastry.

I even gave my niece a lesson in puff pastry. (No fair! my former self cries. No one ever taught ME how to make puff pastry!) 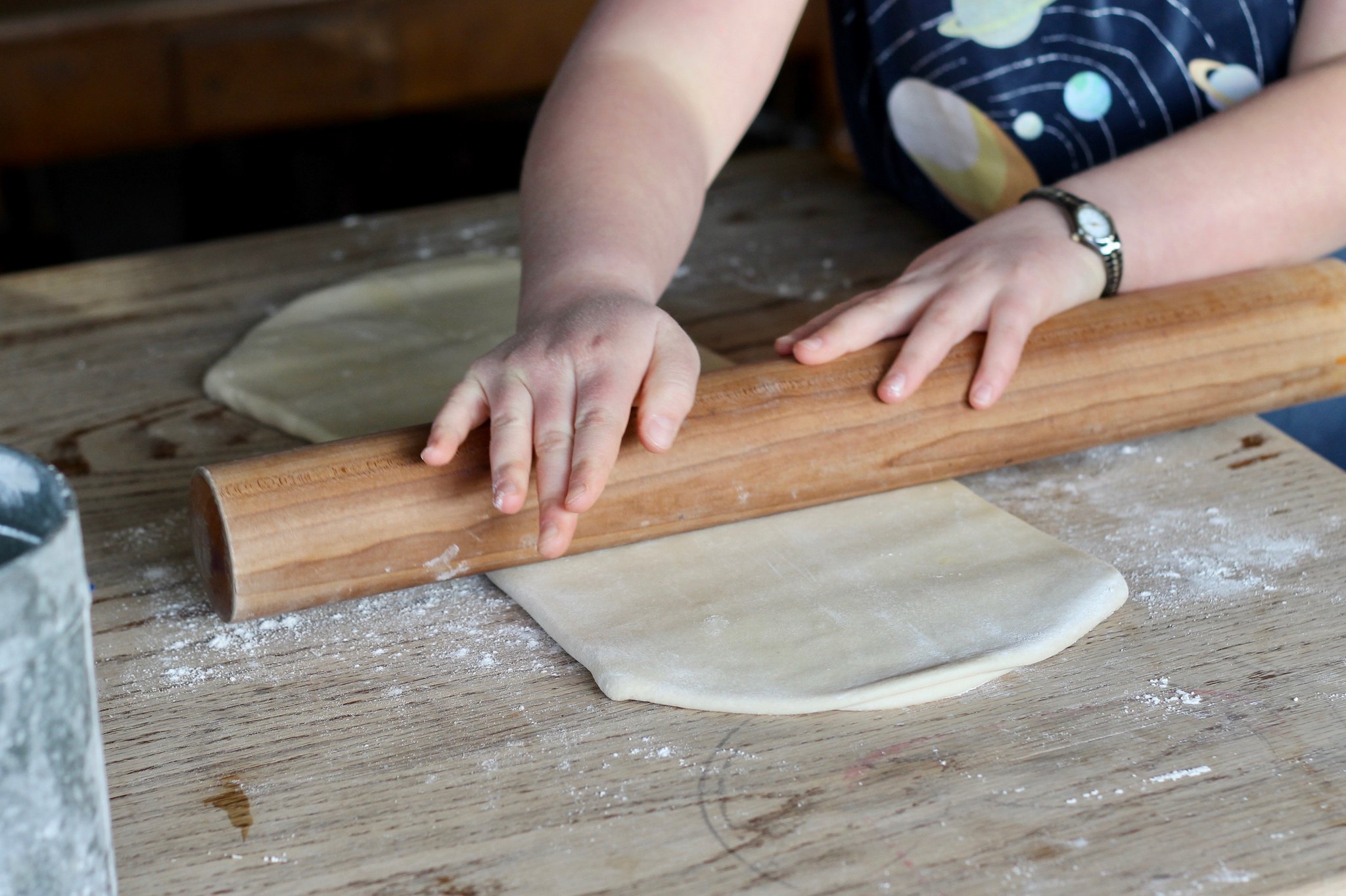 When she arrived, I had Day Two and Day Three doughs in the fridge ready for laminating and baking, respectively. Together, we mixed up a new batch of dough from scratch, laminated a batch of dough, and then baked up a tray of croissants and Danishes. And all in one afternoon, shazam! I should’ve been on TV.

A few of my experiments:

Puff pastry twists: I loosely bundle together the cut-out scraps and then brush with melted butter and cinnamon sugar. Same for little round dough cut-outs. 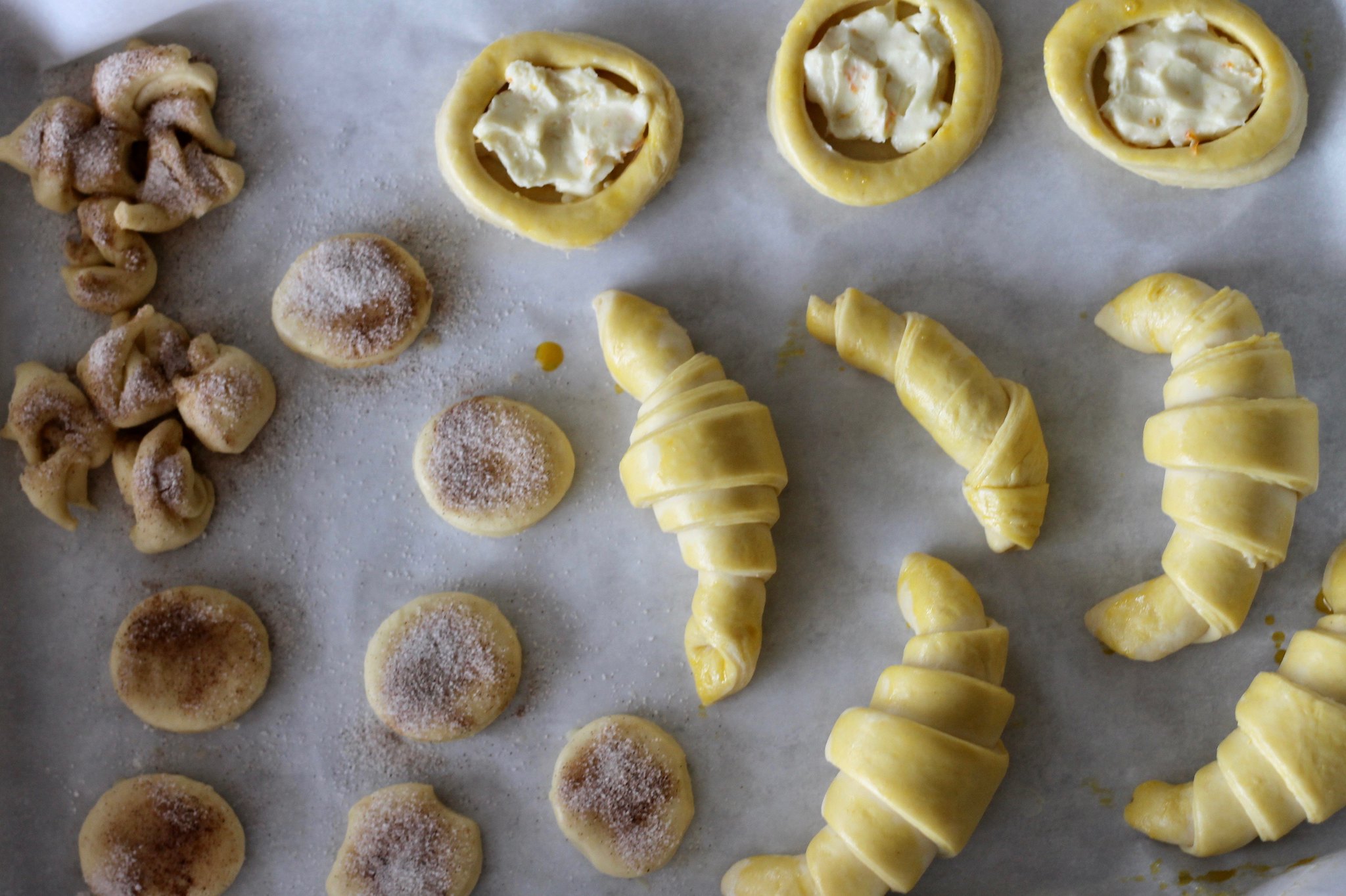 Puff-wrapped Brie: Actually, this was two bakes, and a complete failure, to boot. I split the brie in half and did part cranberry-pecan and the other part onion jam-pecan. 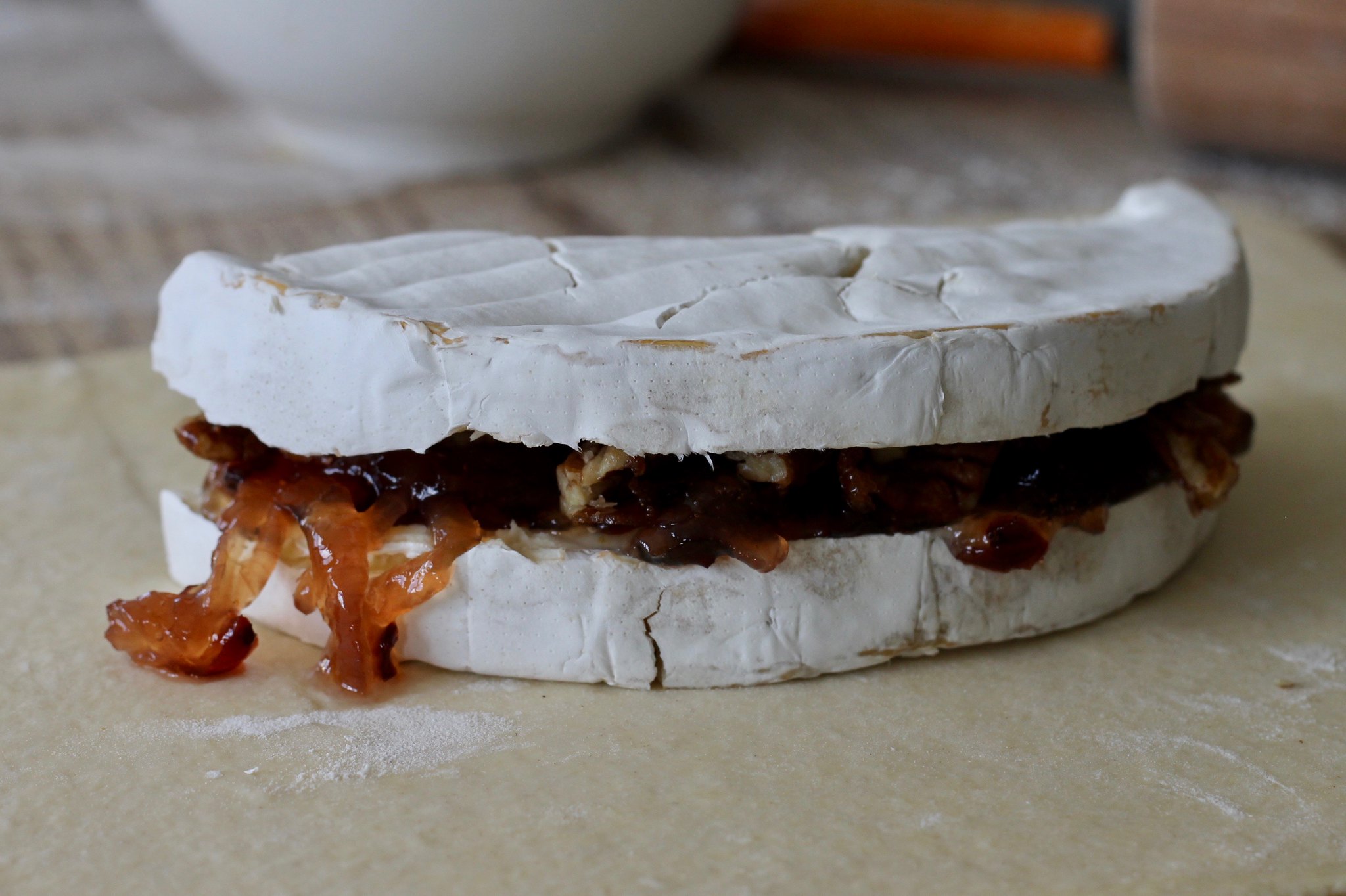 But the pecans were a mistake — the crunch messed with the gooey cheese — and I didn’t bake it long enough so the puff was doughy. (Should’ve stuck with this recipe.) 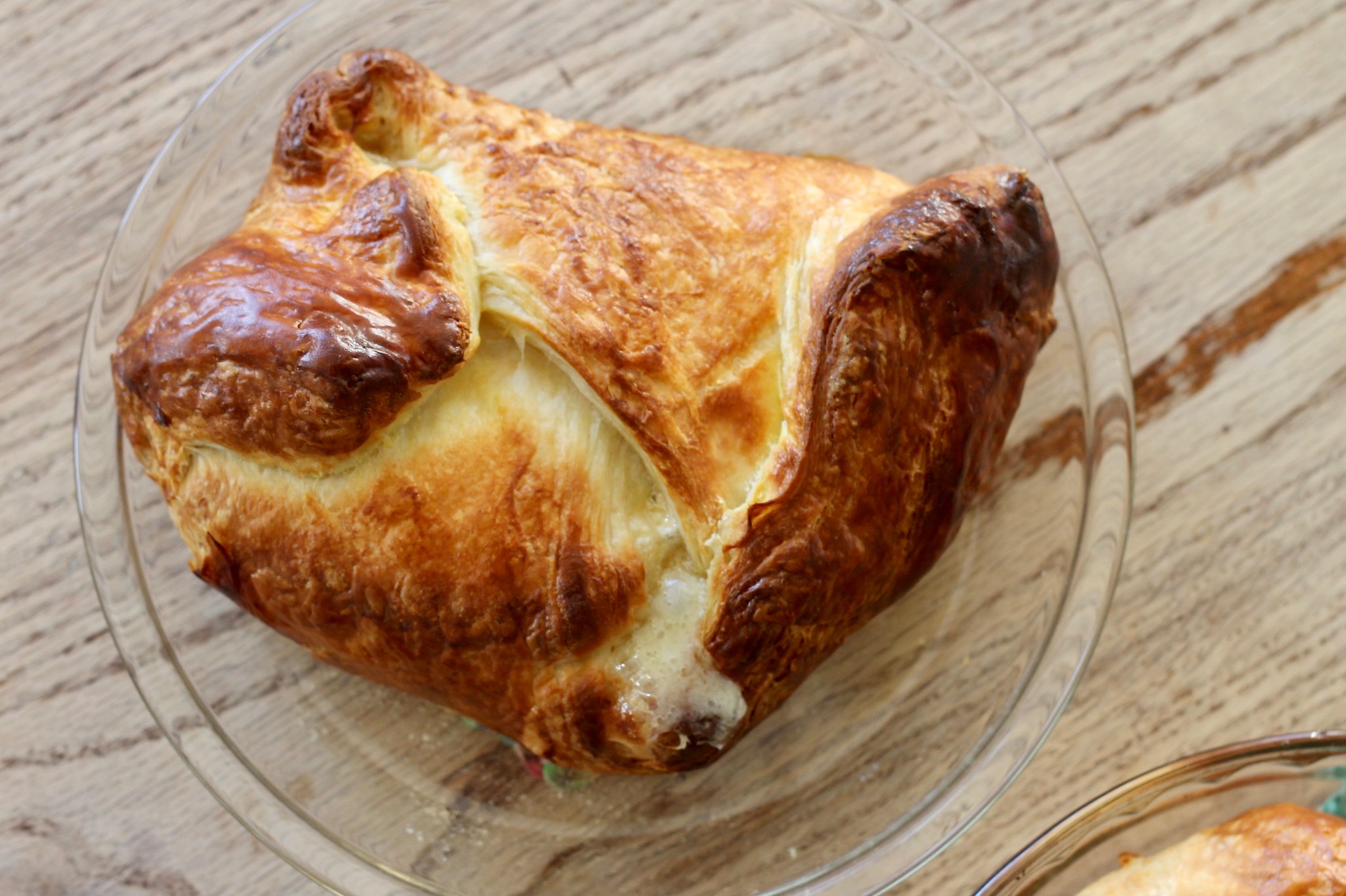 The chickens had a feast, at least. 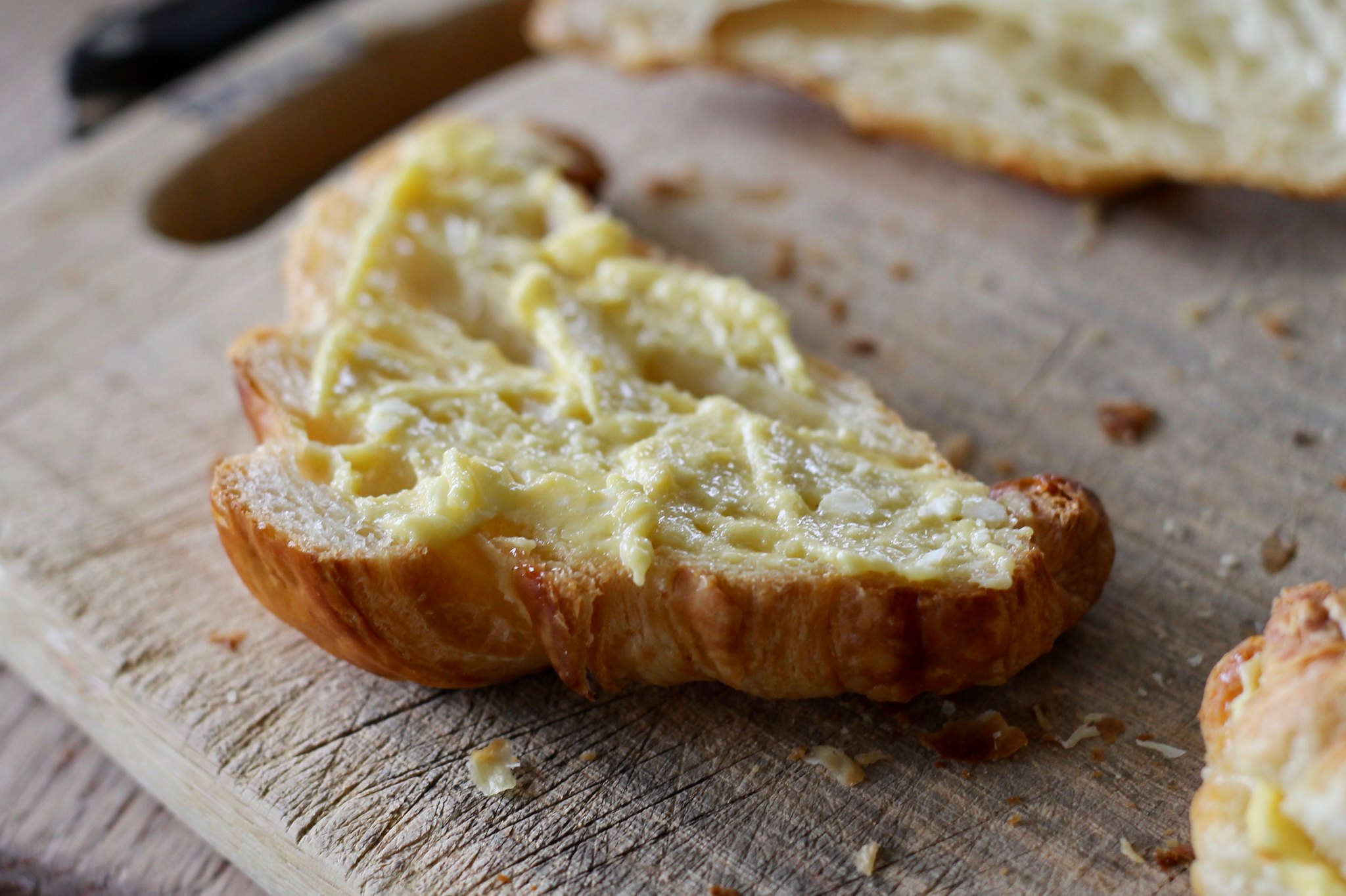 The vast majority of recipes said I was supposed to split stale croissants in half, brush the cut sides with an almond-flavored simple syrup and then fill with a mixture of almond flour, butter, vanilla, and sugar before slapping the two halves together, spreading more filling on top of the croissant and sprinkling with sliced almonds. Then, bake. 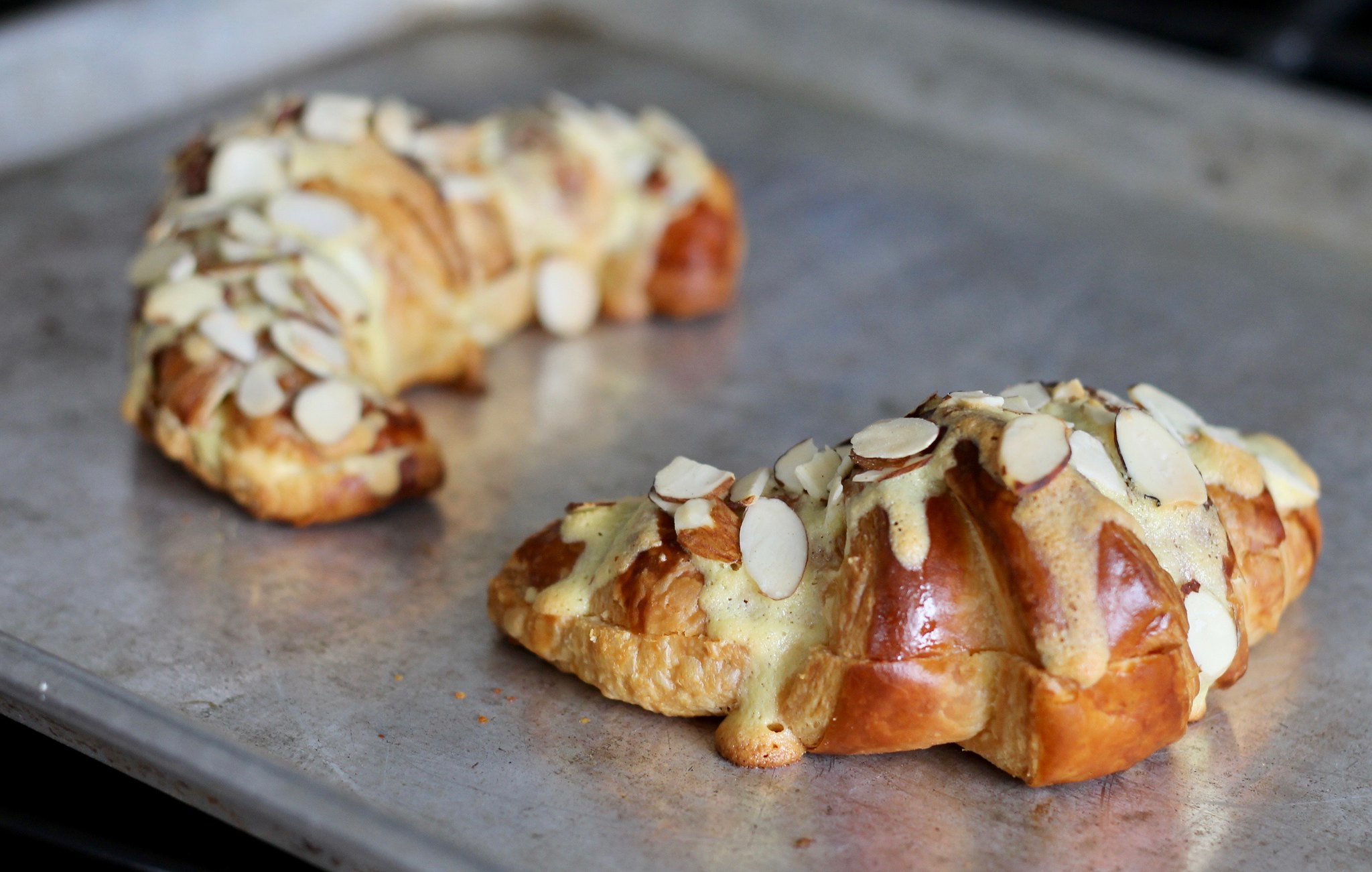 We weren’t fans — not enough flavor (weirdly enough) and too buttery (again, weird). I’m still holding out for a more authentic version, and now I have a jar of almond filling rotting in the fridge, ugh.

Danishes: These are fun! 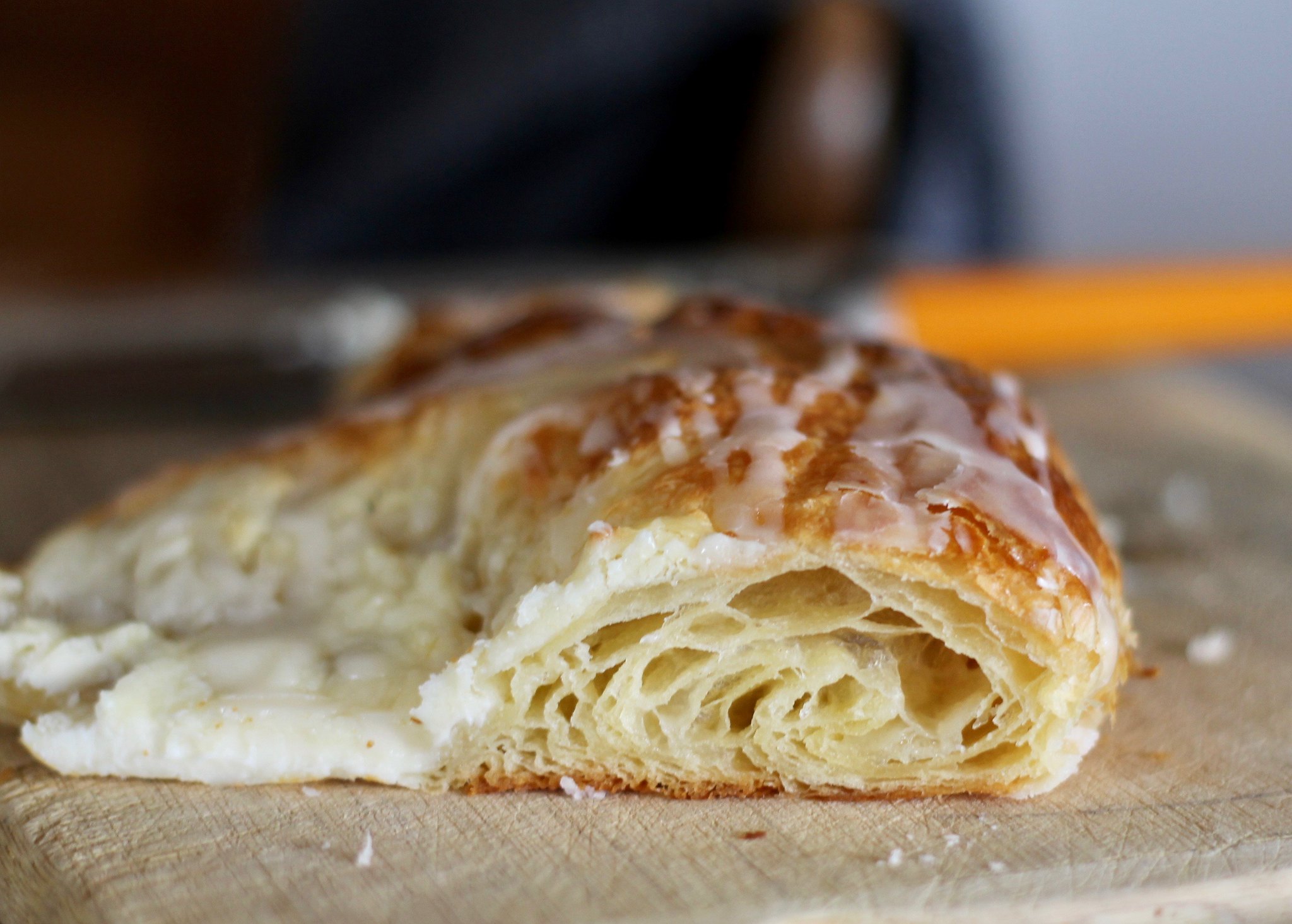 It’s taken me awhile to figure out how to fill these in such a way that the filling doesn’t mash down the puff pastry and make it doughy (or spill out the side). 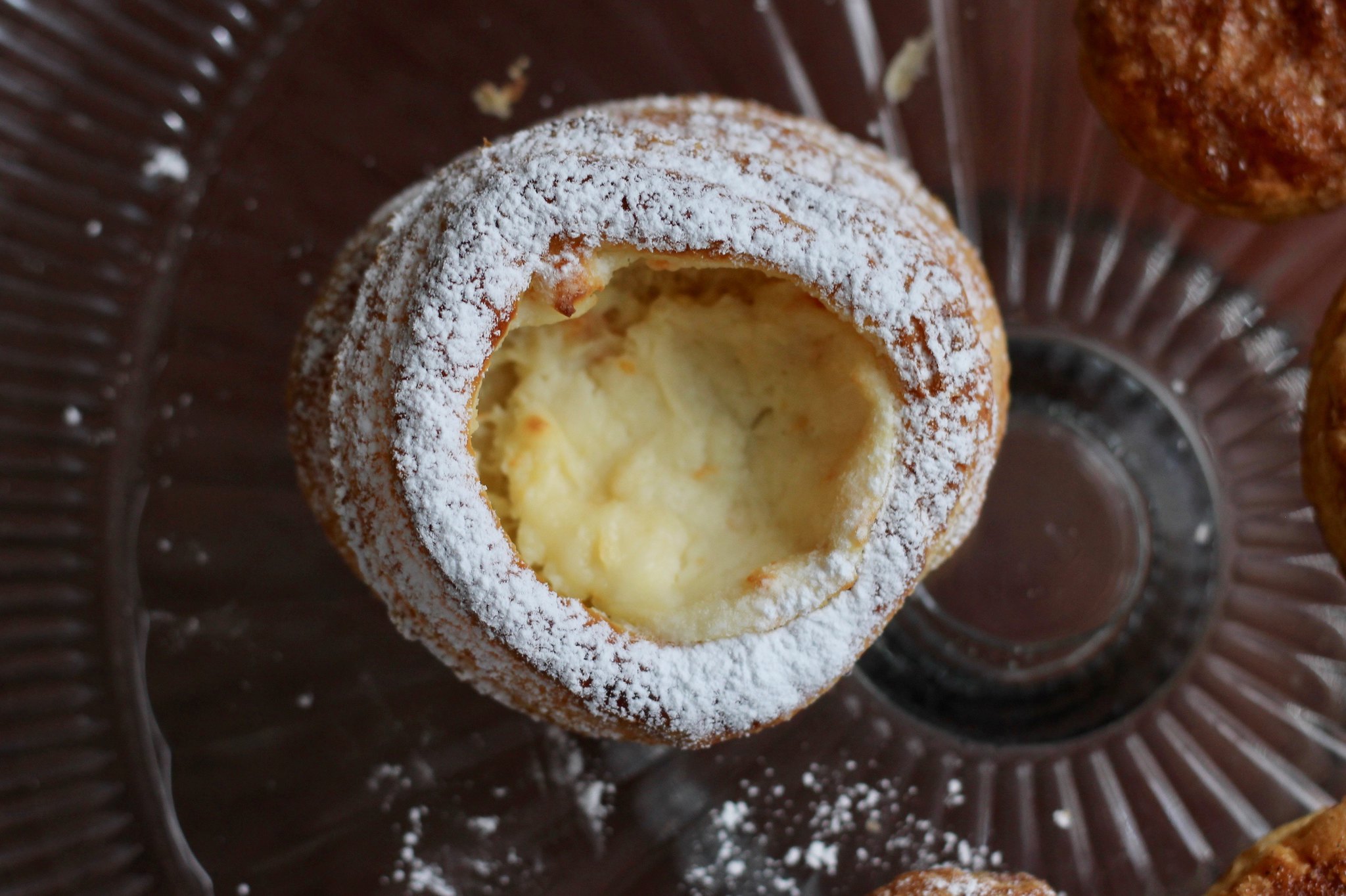 I’m still not a hundred percent there, but I do know these are definitely worth figuring out.

Cinnamon buns: these are, of course, crunchier and flakier than regular cinnamon buns (which I prefer), but still exotically delicious. 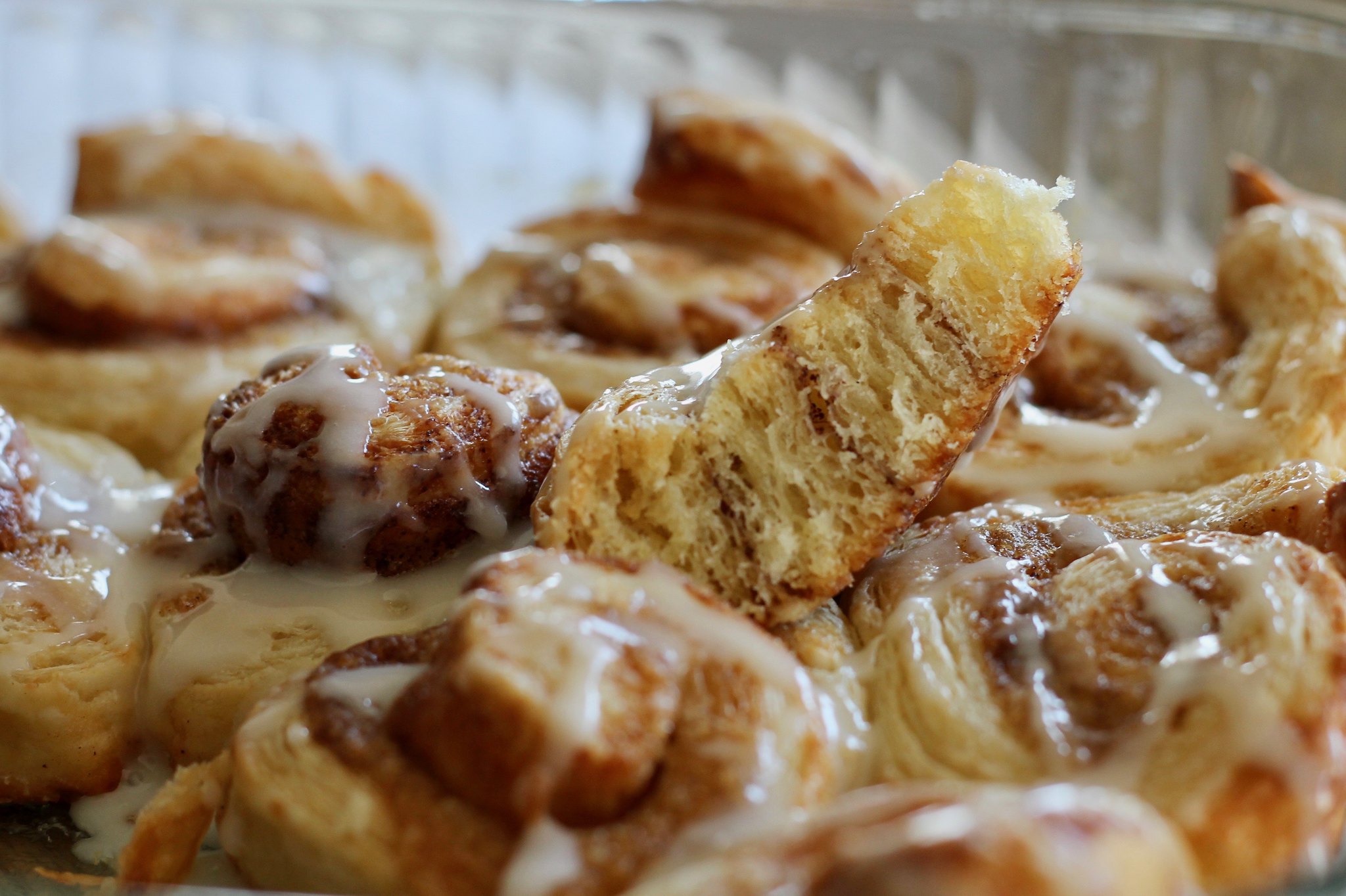 I’d also like to figure out puff pastry cups (flipping muffin tins upside down, draping with dough, and then baking, probably) so I can fill them with my favorite chicken salad. And what about parmesan twists, or using the pastry as a topper for chicken pot pie or as a crust for a simple cheese pizza? And I think I owe it to myself to make at least one batch of cronuts, right?

A few notes about the puff process (and I will be cross referencing this information with the actual post on croissants):

*I think the gumminess I was struggling against in the beginning was due to the moisture in the butter. I read somewhere that I should warm the butter to room temperature and beat in a couple teaspoons (tablespoons?) of flour before spreading it into the desired square shape and refrigerating until set. I’ve never done that — too complicated — but I do sprinkle the top and bottom of my butter with plenty of flour before rolling it out. Ever since, I haven’t had any trouble.

*Confession: I said that you can’t use Rapid Rise yeast — it has to be instant rise — but I’ve used both and I can’t tell the difference. In fact, I’m not sure why I couldn’t use my regular yeast. I use hot tap water — the milk is cold, and so is the butter, but the hot water, plus the friction from the six-minute mixing is probably enough to activate the yeast. But maybe not? Hmm, for a dedicated baker, it’s quite shocking how little I understand about yeast.

*After Day Two’s Lamination process, the dough can live in the fridge for several days. I kept thinking the long refrigeration might result in a smaller rise, or a sour taste, but I needn’t have worried. 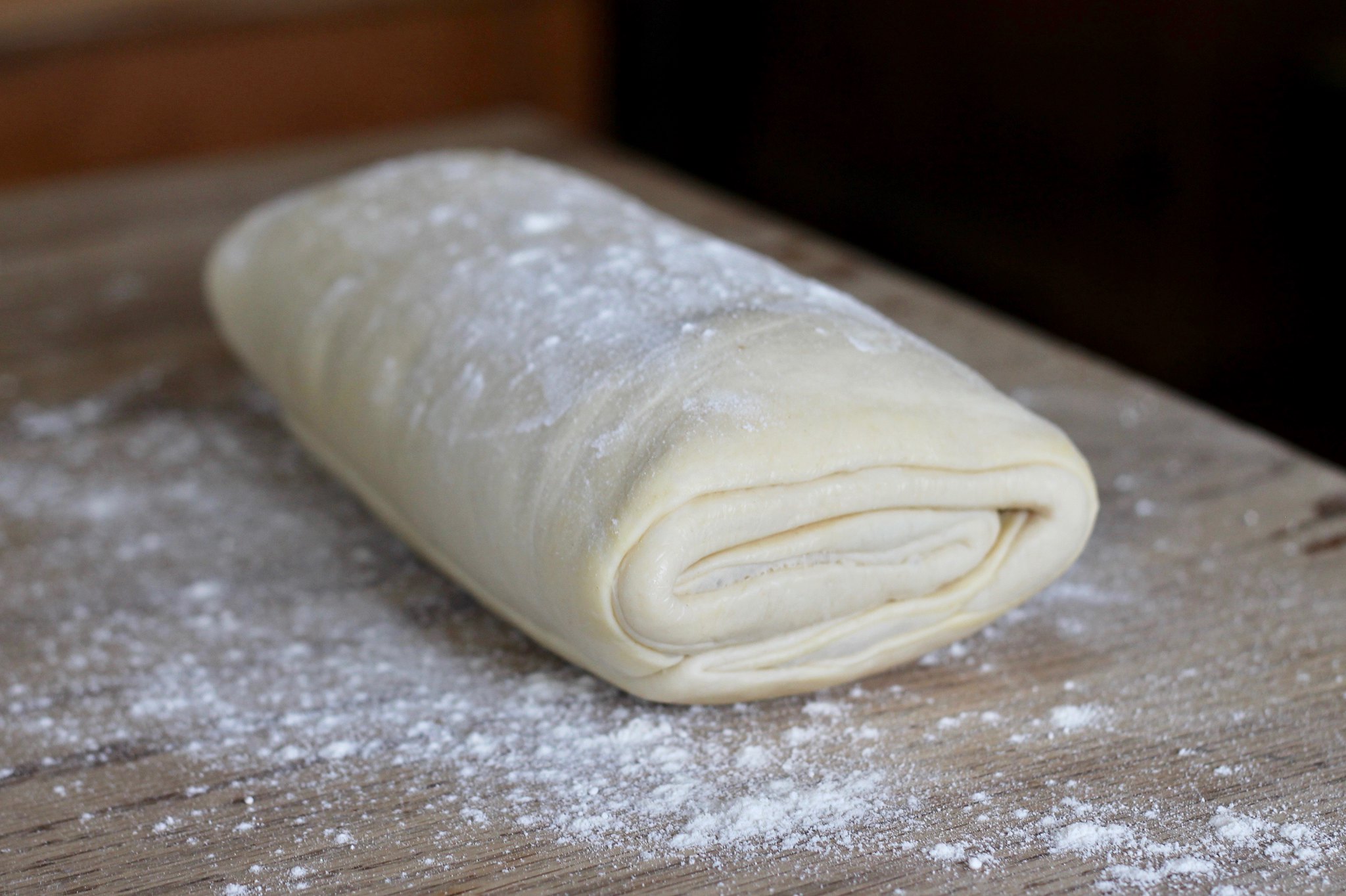 The croissants were as good as ever.

*On Day Three, I often cut the dough in two parts. 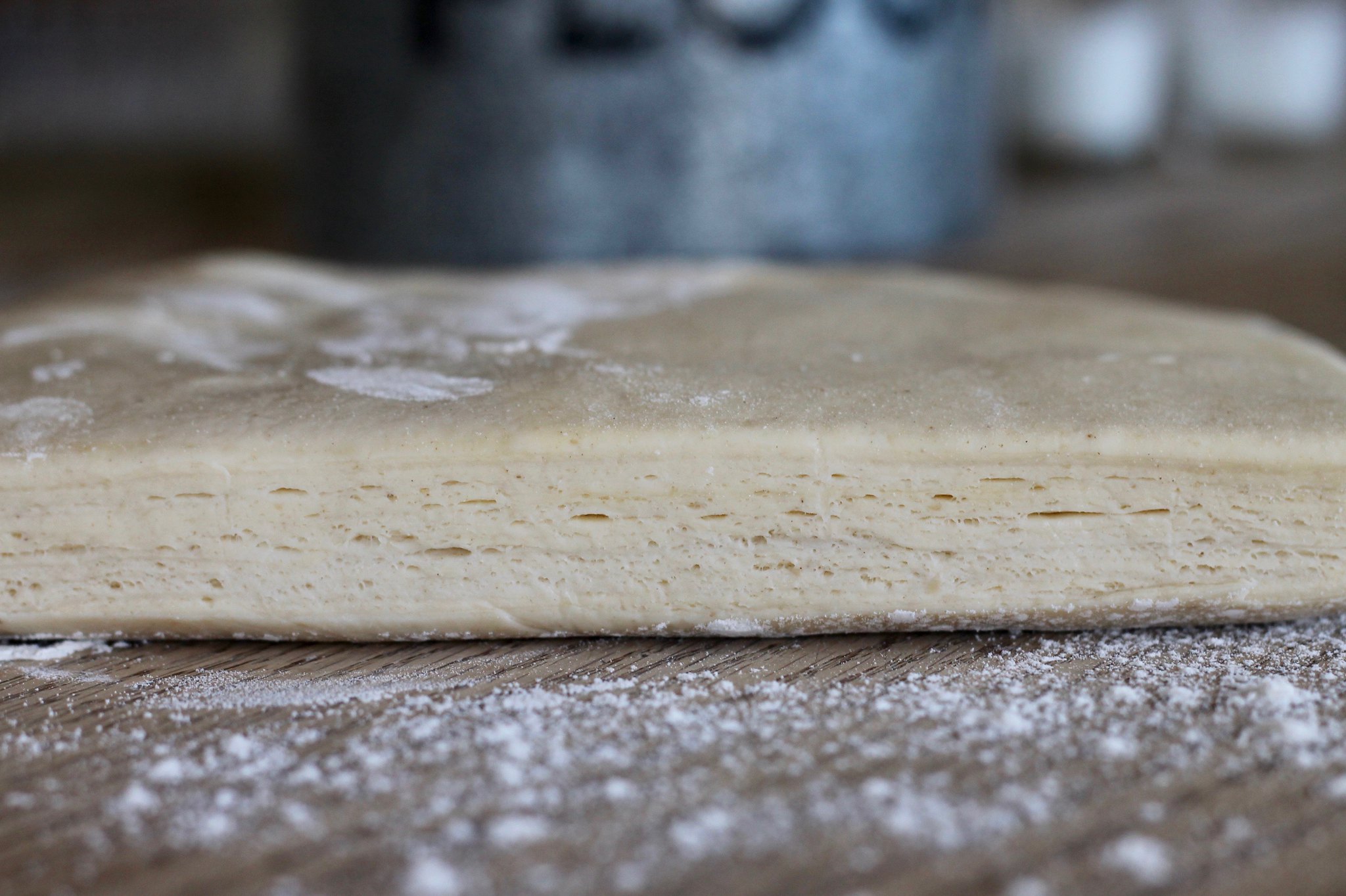 I bake one half and rewrap the other half in plastic and return to the fridge for another day.

*After brushing the croissants with an egg wash, do not cover them with anything — neither cloth nor plastic — while they rise because they’ll stick. 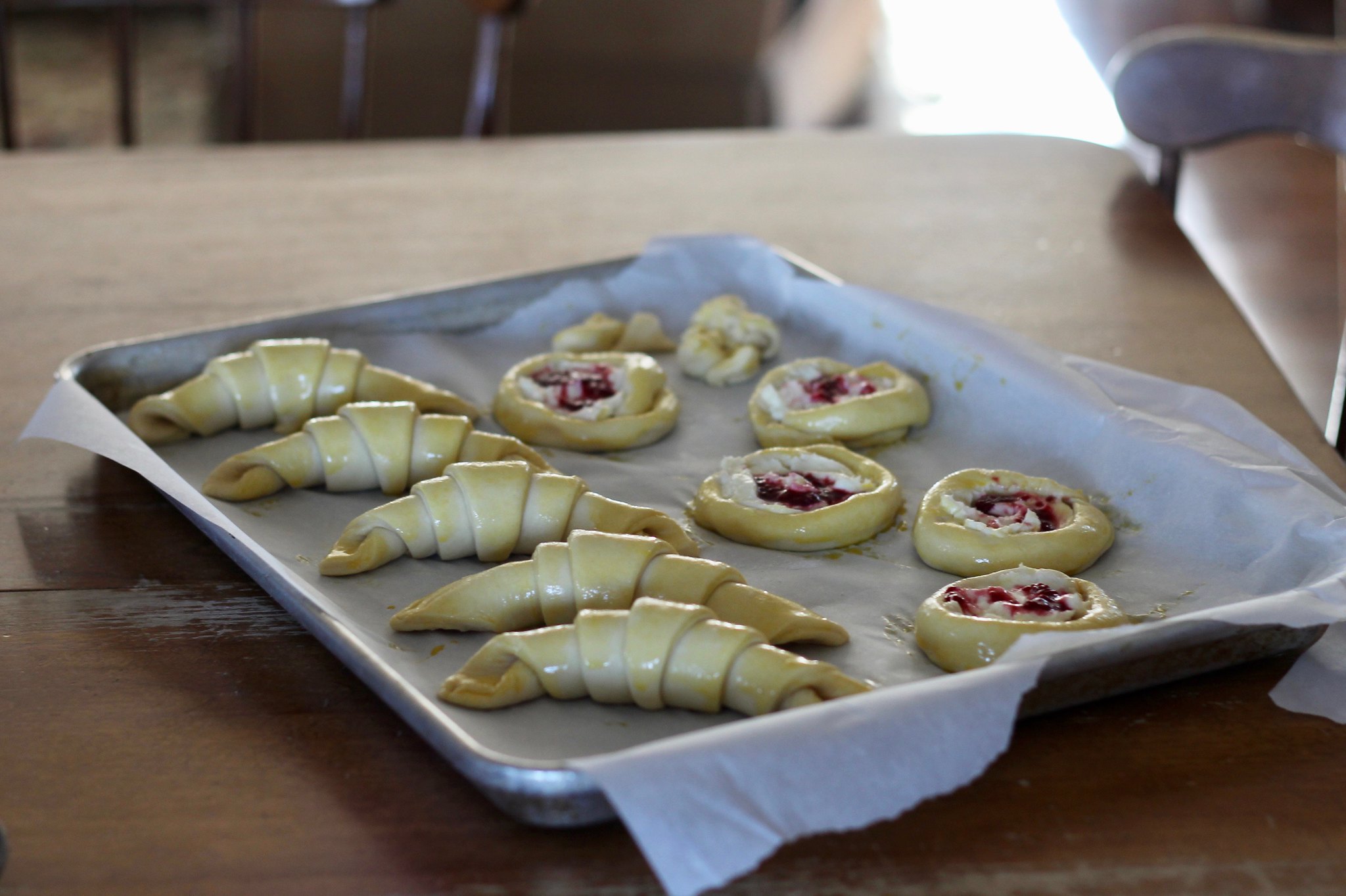 *While croissants can be frozen raw (after rising), they seem to do best if they’re baked fresh, without the freezing. They just get so lofty high and lovely!

*Baked croissants freeze well. My parents froze a couple that I gave them, and just this week my mother sent me the following email: They freeze perfectly and we had perfect ham-and-cheese croissants for breakfast. So there you have it — perfection!

*To keep the bottoms of the croissants from getting too dark, I often slip a second baking tray under the pan around the 18-minute mark for lovely golden brown, unscorched bottoms.

*I store baked croissants, uncovered, in the jelly cupboard. After several days, they’re thoroughly stale but still quite delicious, especially with a smear of knock-off Nutella.