First thing in the morning (well, first thing after I’d baked two sausage-egg casseroles and a pan of sweet rolls and warmed two other pans of sweet rolls and assembled a fruit salad), my brother’s family and our family caravanned over to my parents’ place. We quietly walked into the house, our arms loaded with food. Mom was sitting on the sofa, holding the Pittsburgh brother’s new baby (their family had arrived at my parents’ place the night before), completely absorbed. Not until almost all of us were standing in the kitchen, staring at her, did she even glance up and register that we were there — surprise! 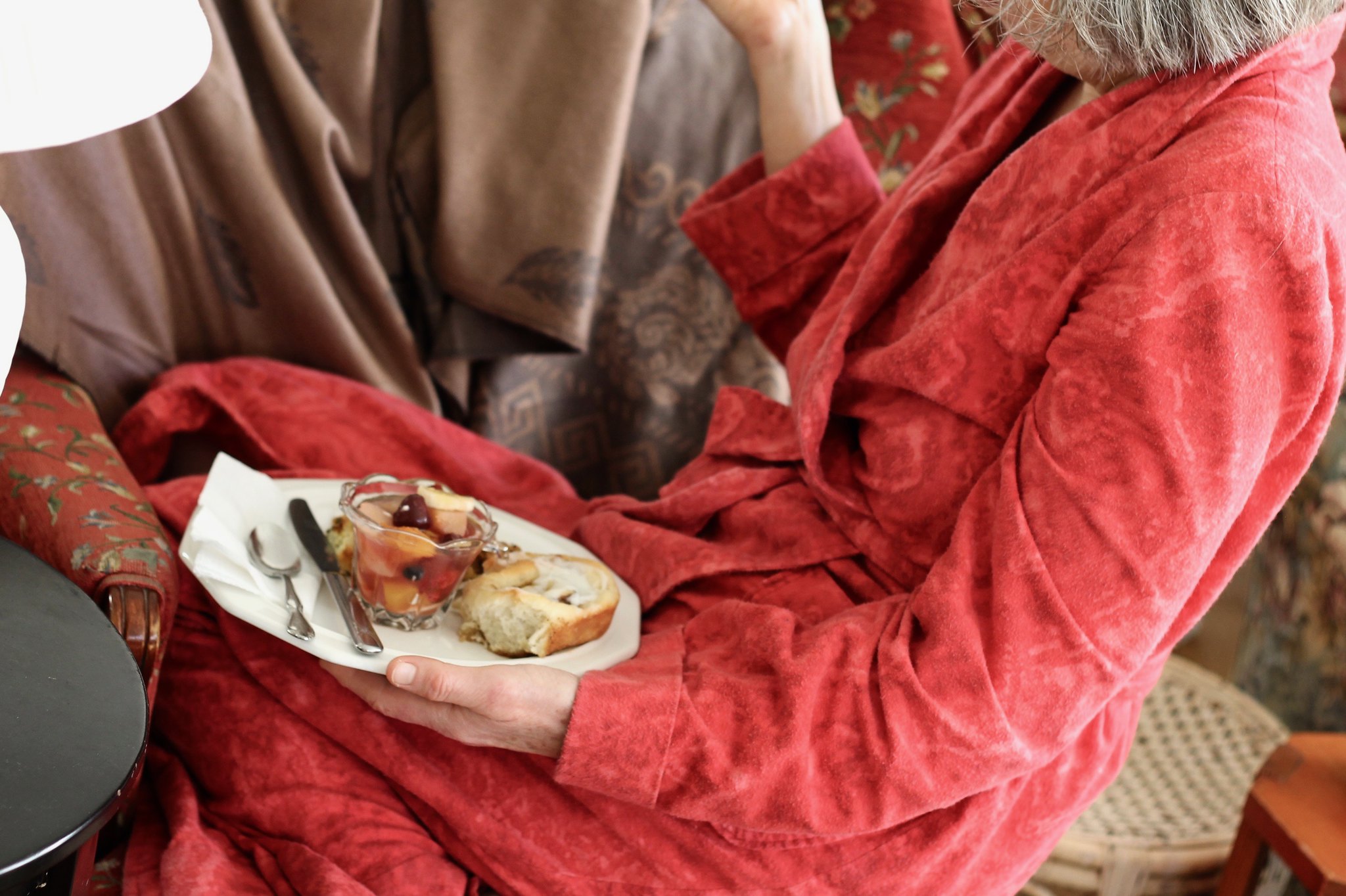 My poor father had been trying to hold her off in the kitchen — he’d even went so far as to mix up a batch of pancake batter and heat up the skillet — so we cleared away the fake breakfast, set our stuff up, and tucked in. 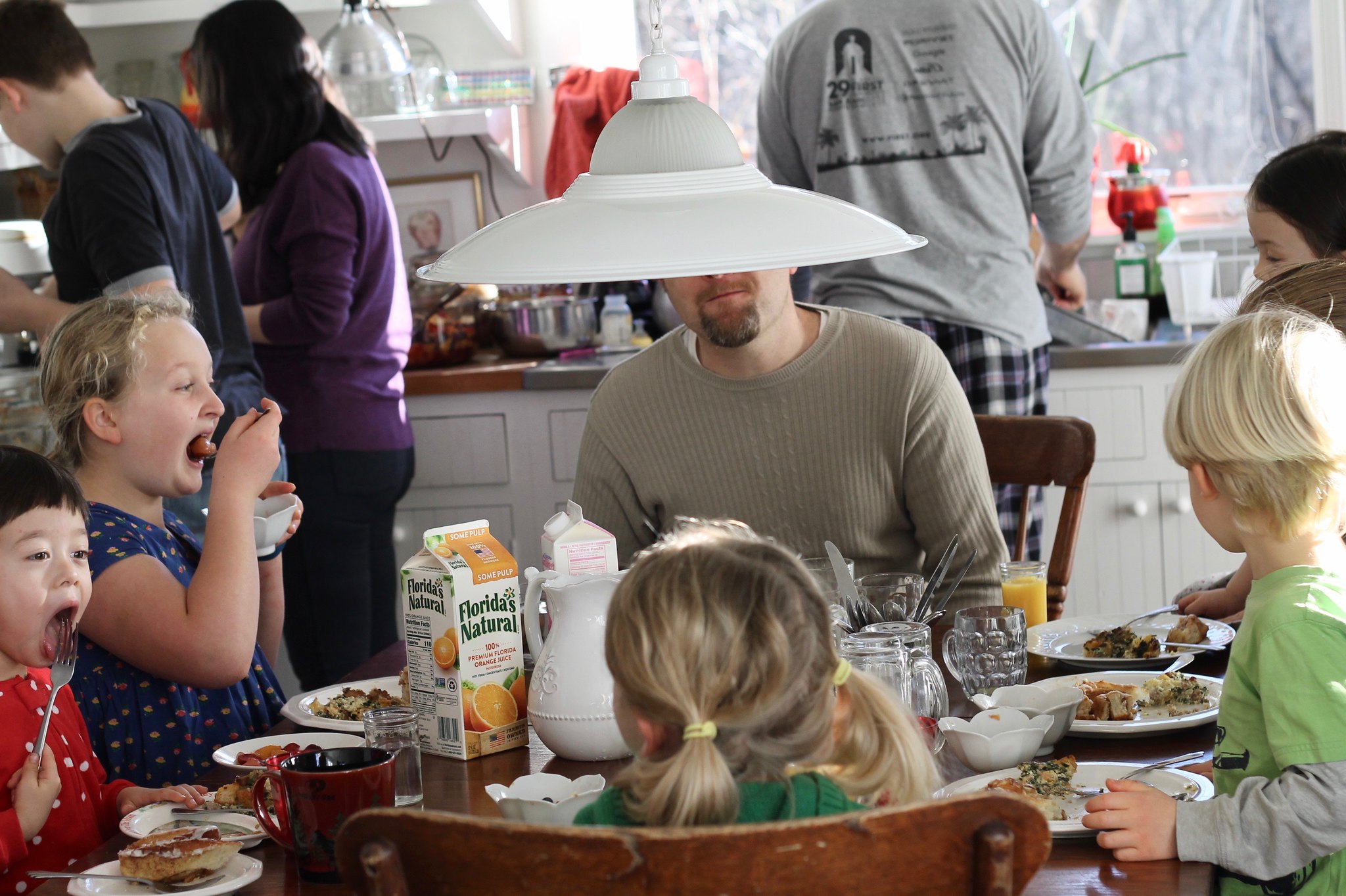 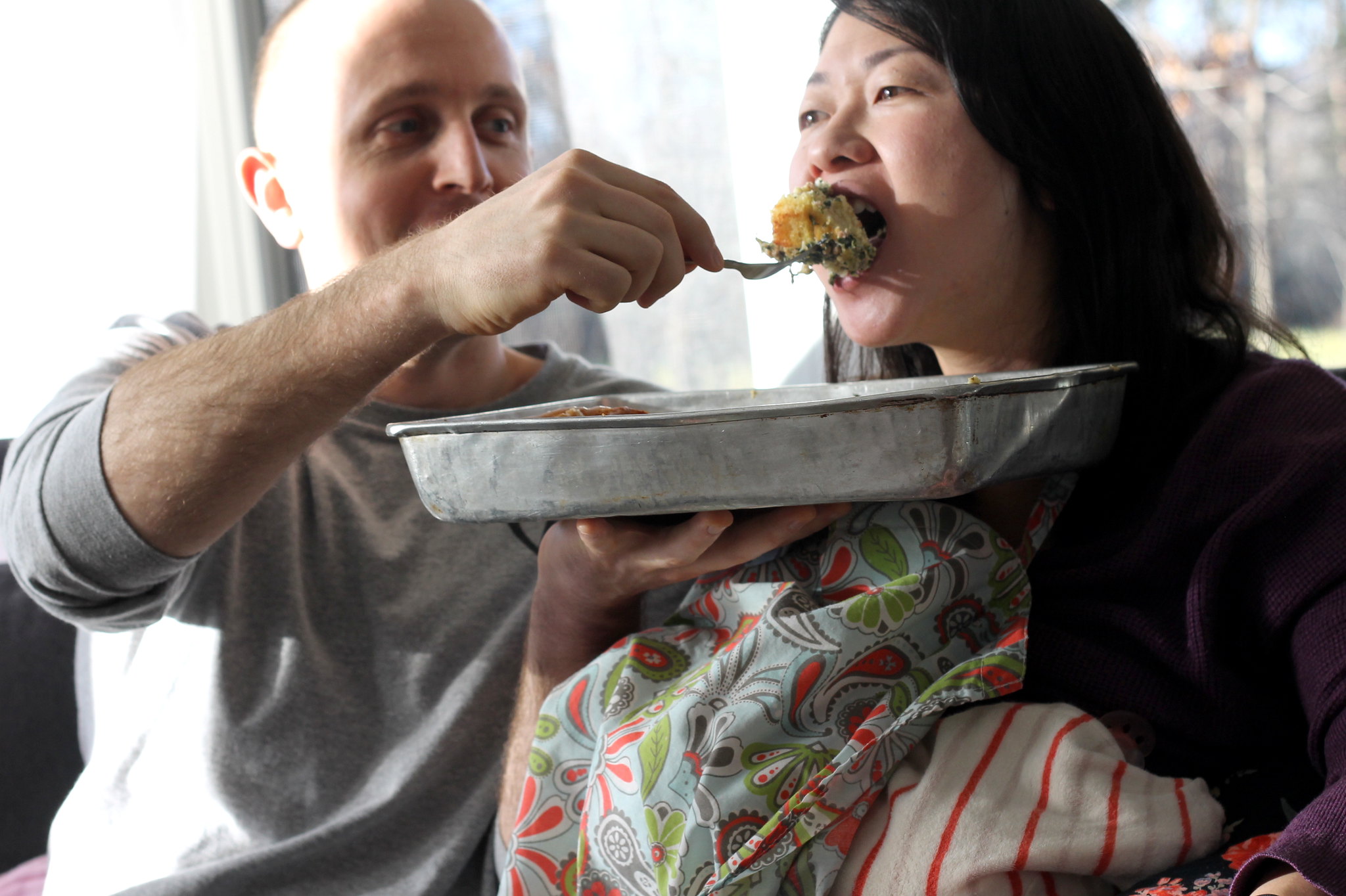 After breakfast, we gave her cards and gifts… 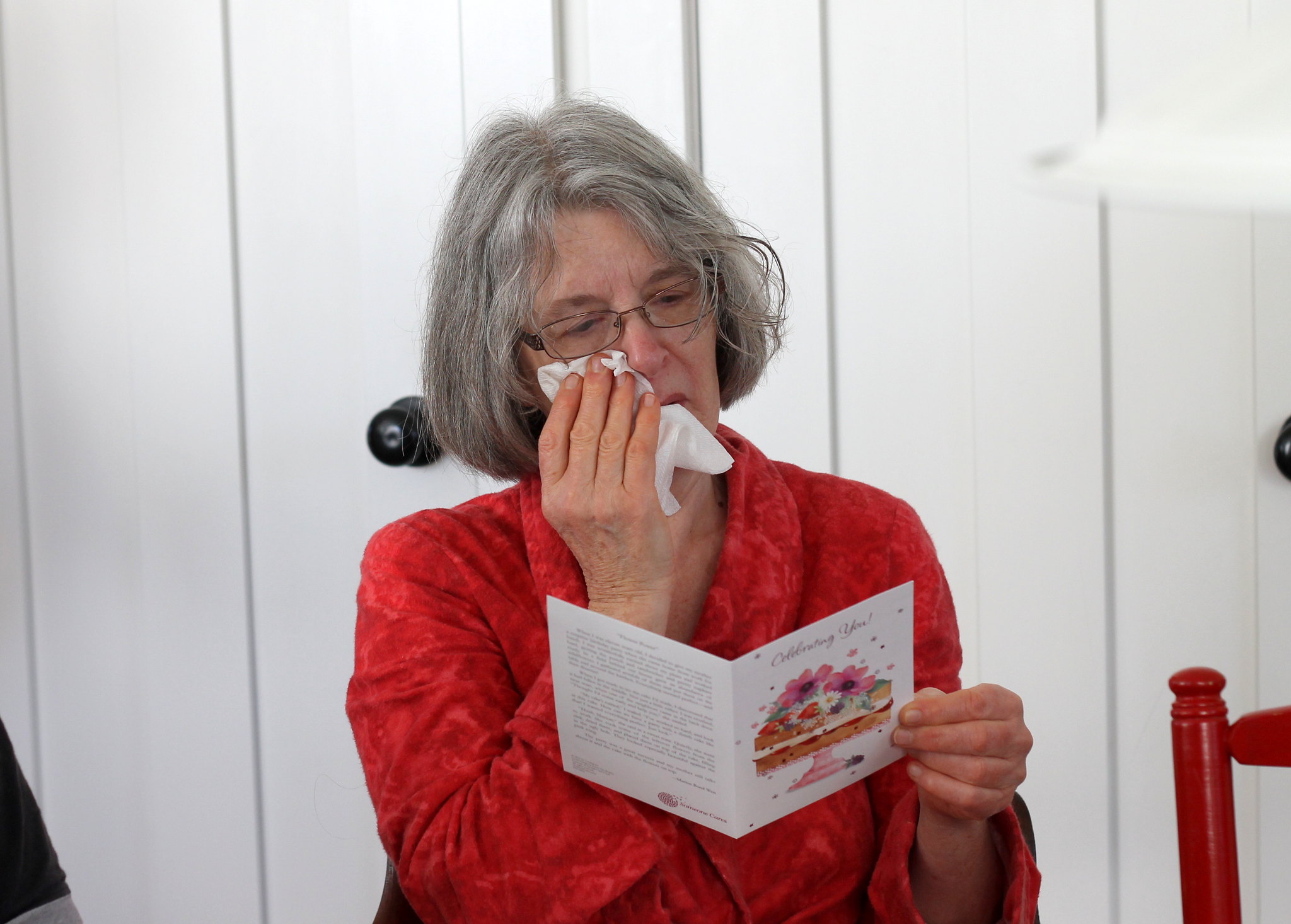 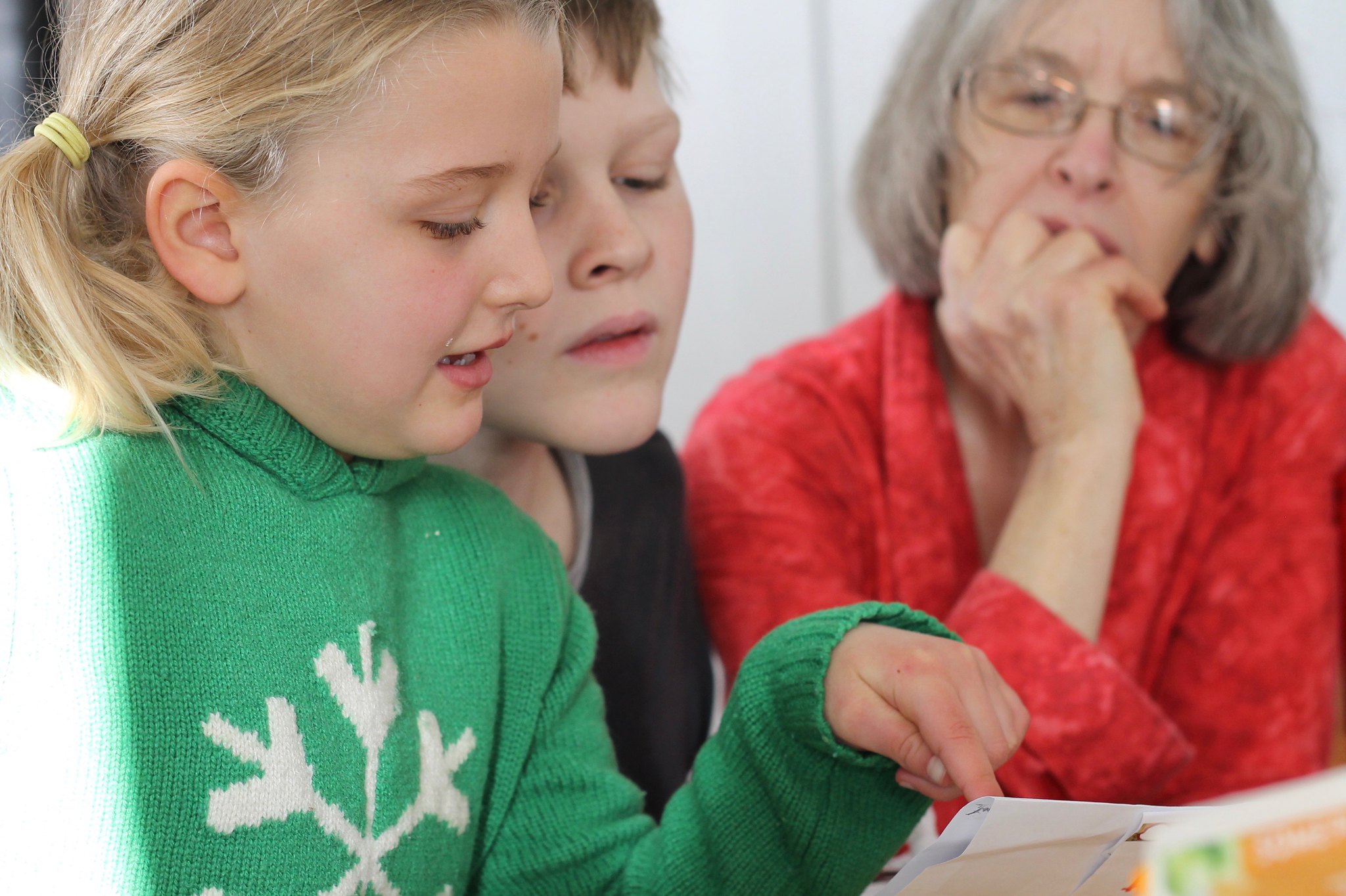 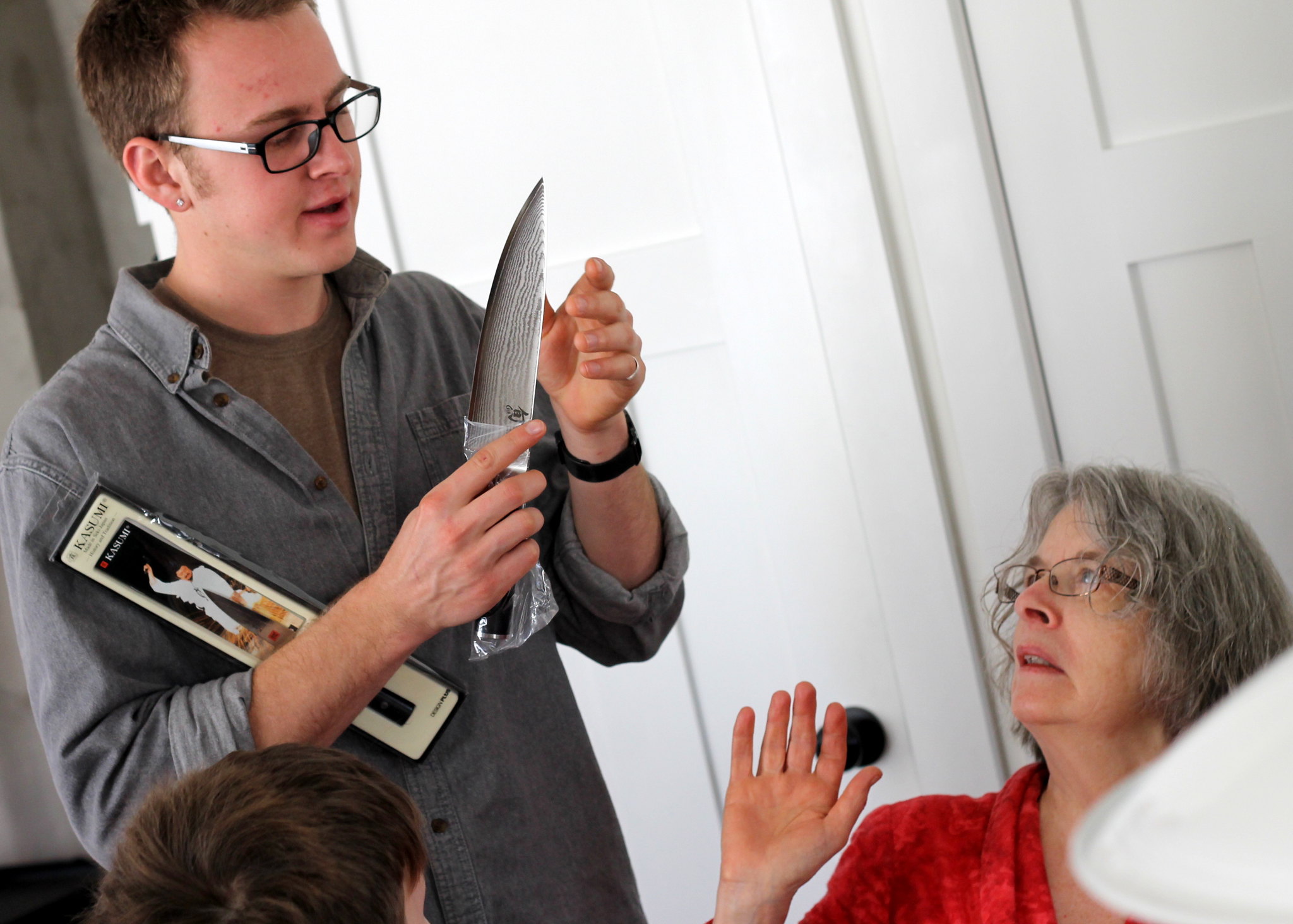 fancy-schmancy — and terrifyingly sharp — knives from my younger brother

And then we hung out for a bit, fighting over who got to hold the baby and visiting. 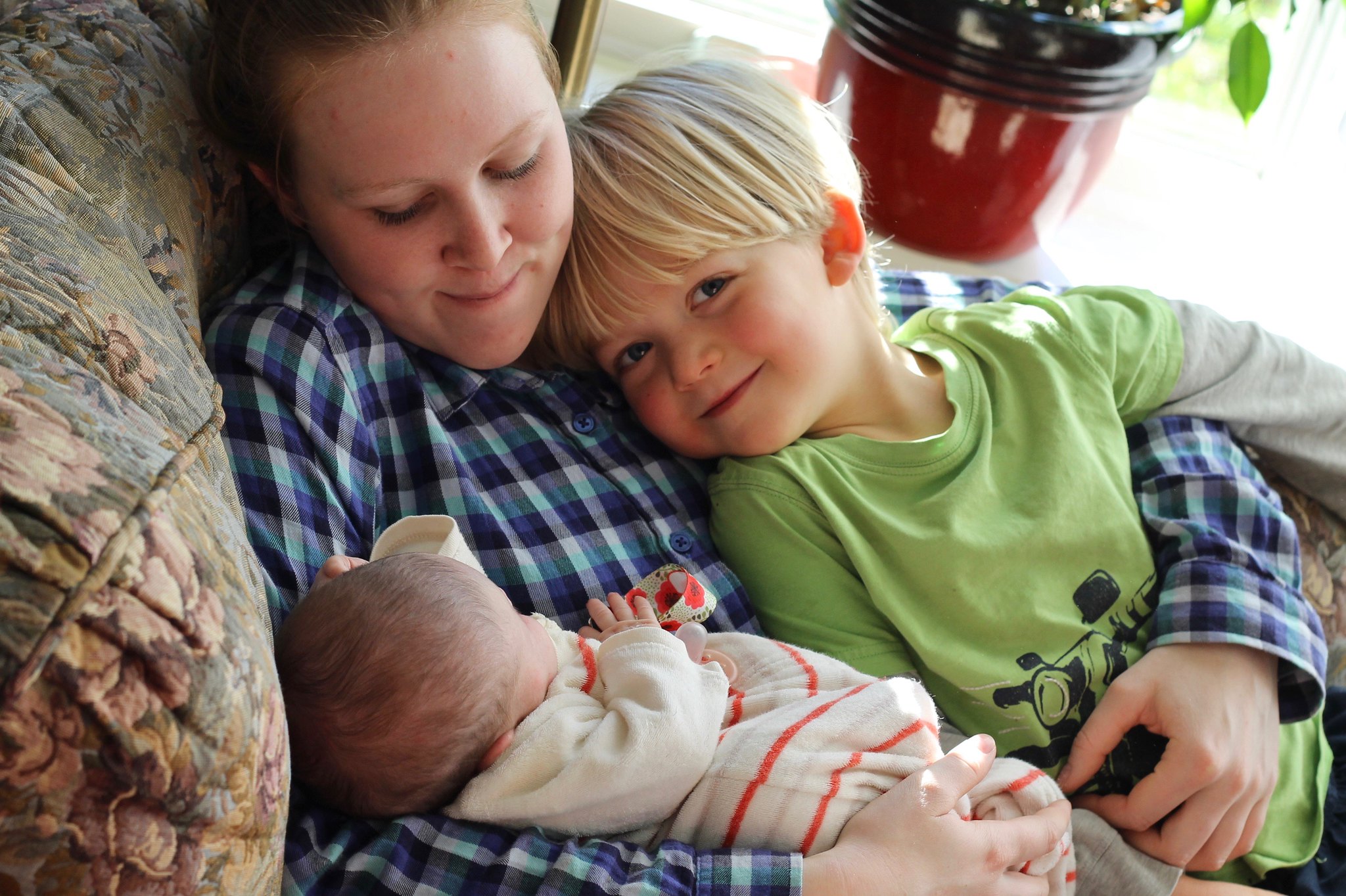 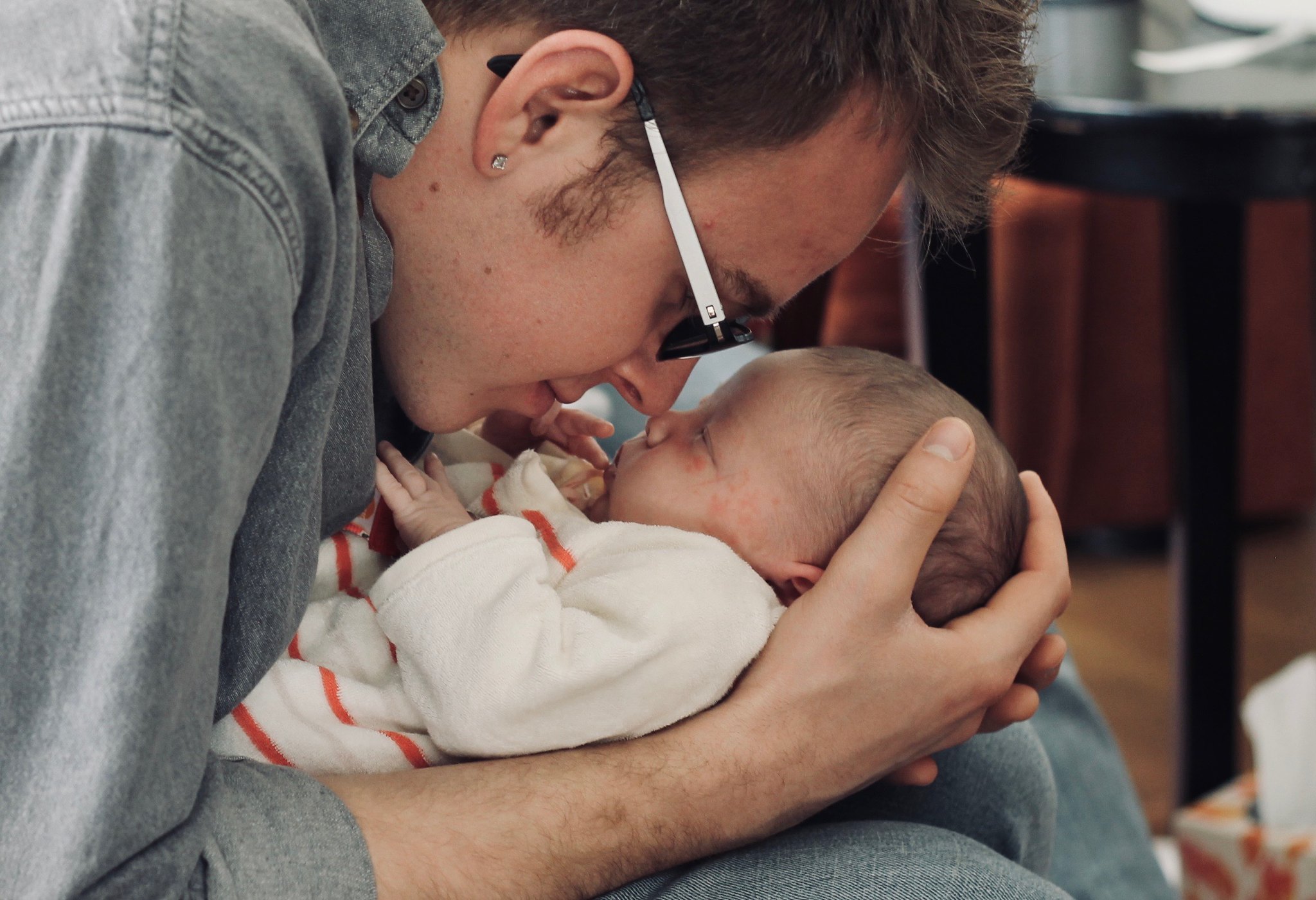 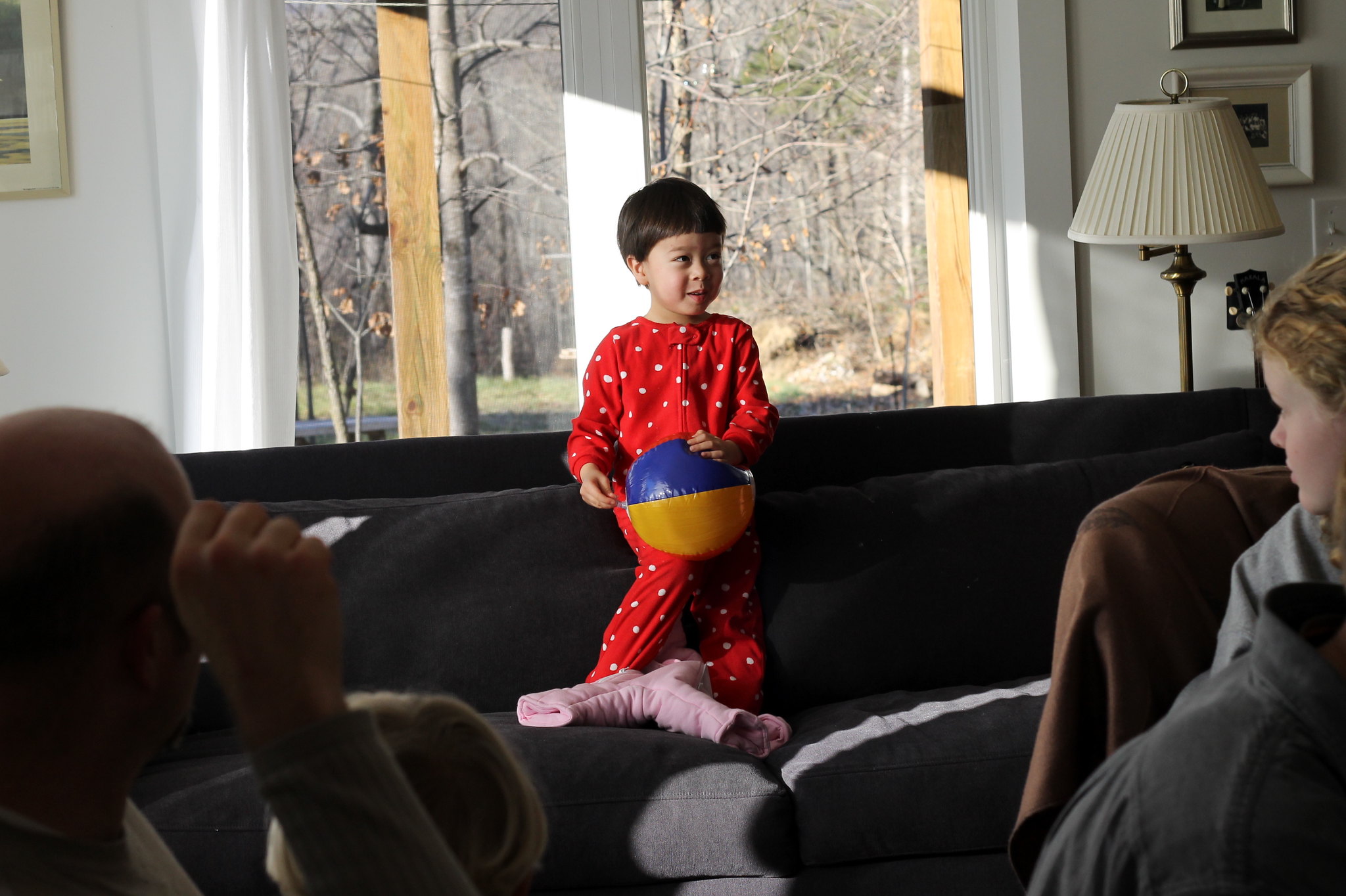 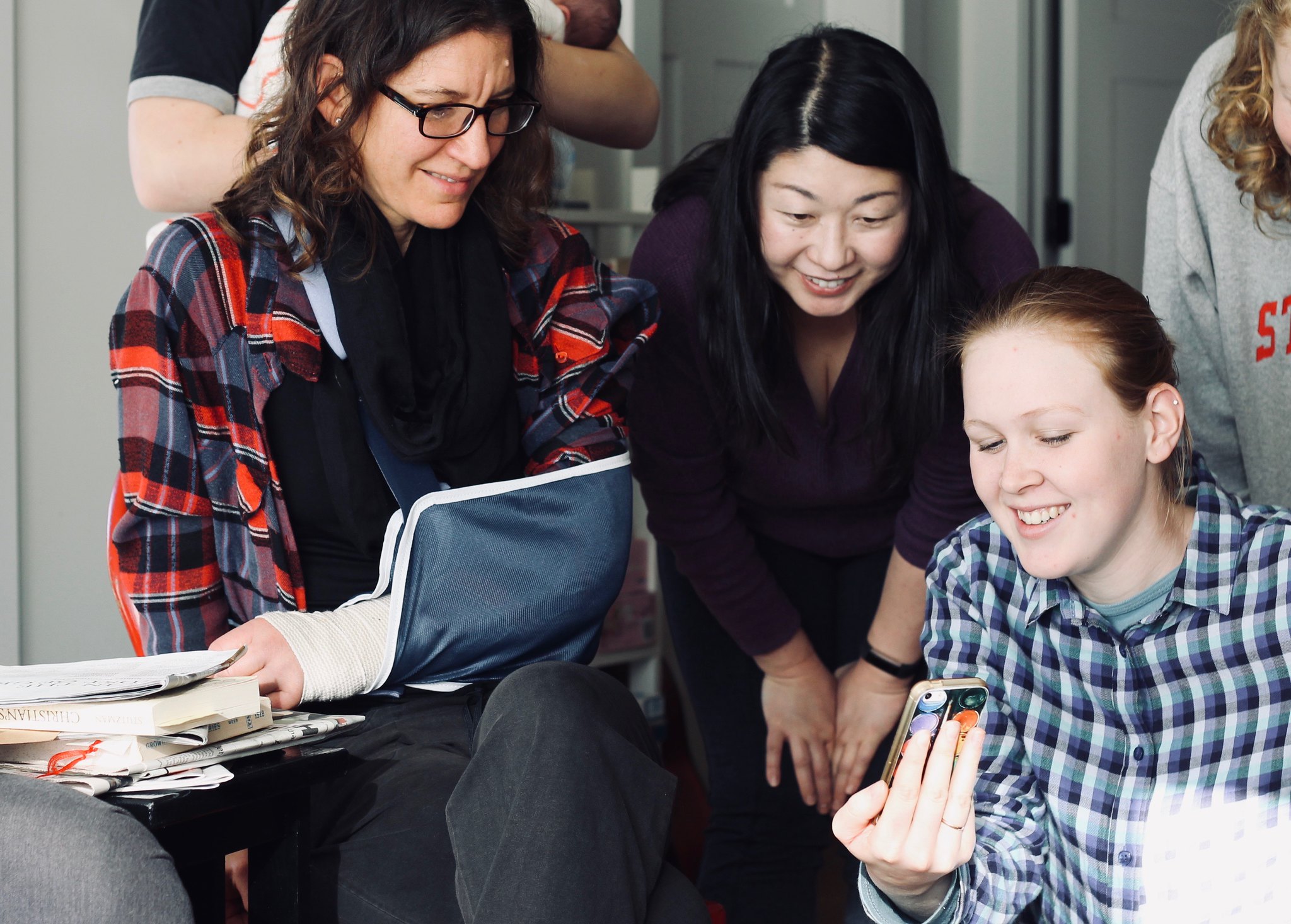 Mom had to leave then, to go teach her class for refugees, so we all stayed behind to rehearse the music for the evening event … that she didn’t know about. 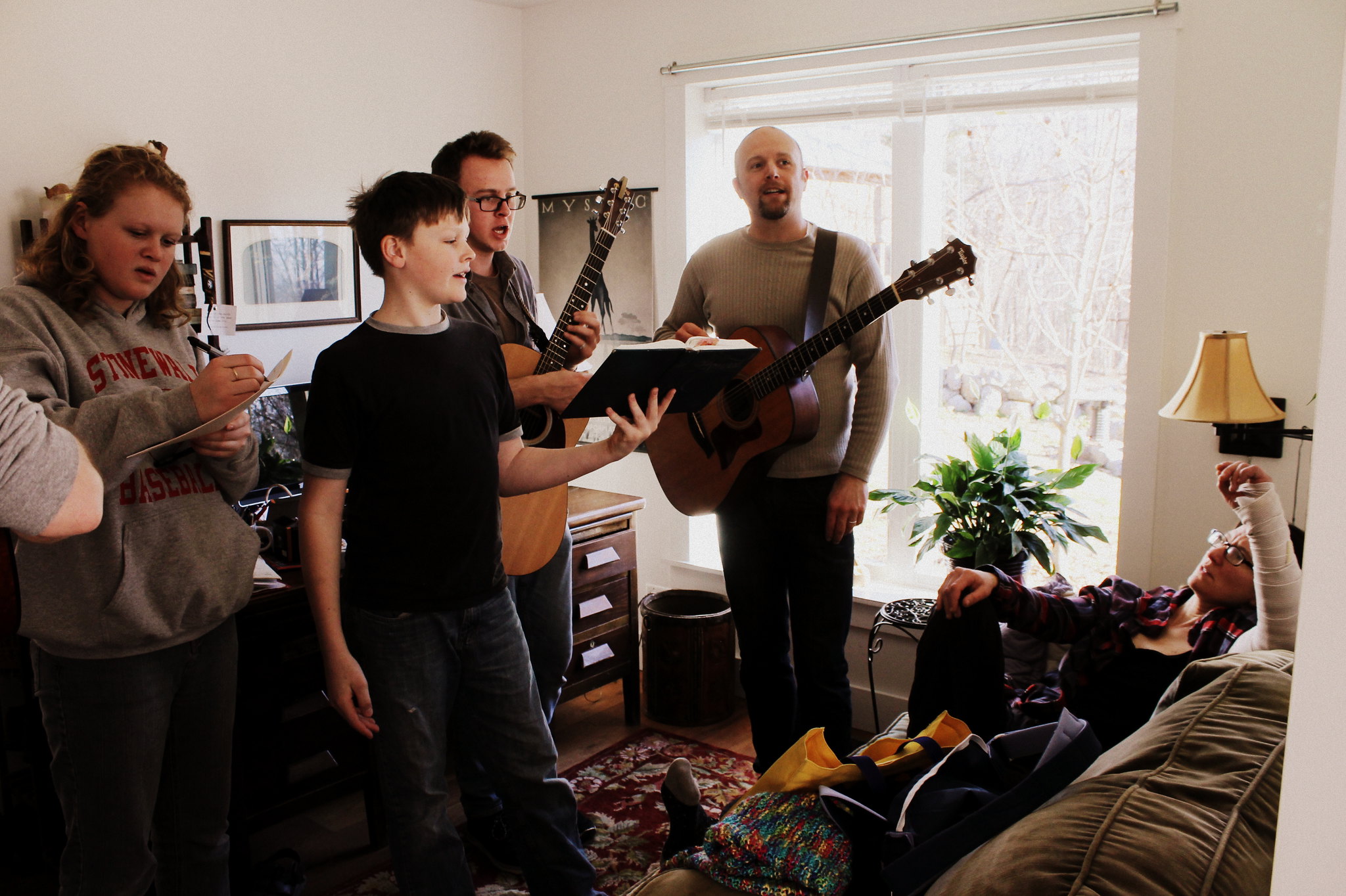 A few days before, I’d invited her and Dad over for a birthday supper, said my Pittsburgh brother and his wife were welcome to join if they wanted. The evening event wasn’t a big party or anything — just all of us again, with the addition of my mom’s sister, and lots of good food. Maybe she sort of figured it out ahead of time? I’ll have to ask her. (I haven’t talked to her since Tuesday. Probably she’s still recuperating.)

So mid-afternoon my aunt arrived at our house. My brothers’ families showed up, too, and we prepped food and strung the kids’ homemade paper chains and lit candles. 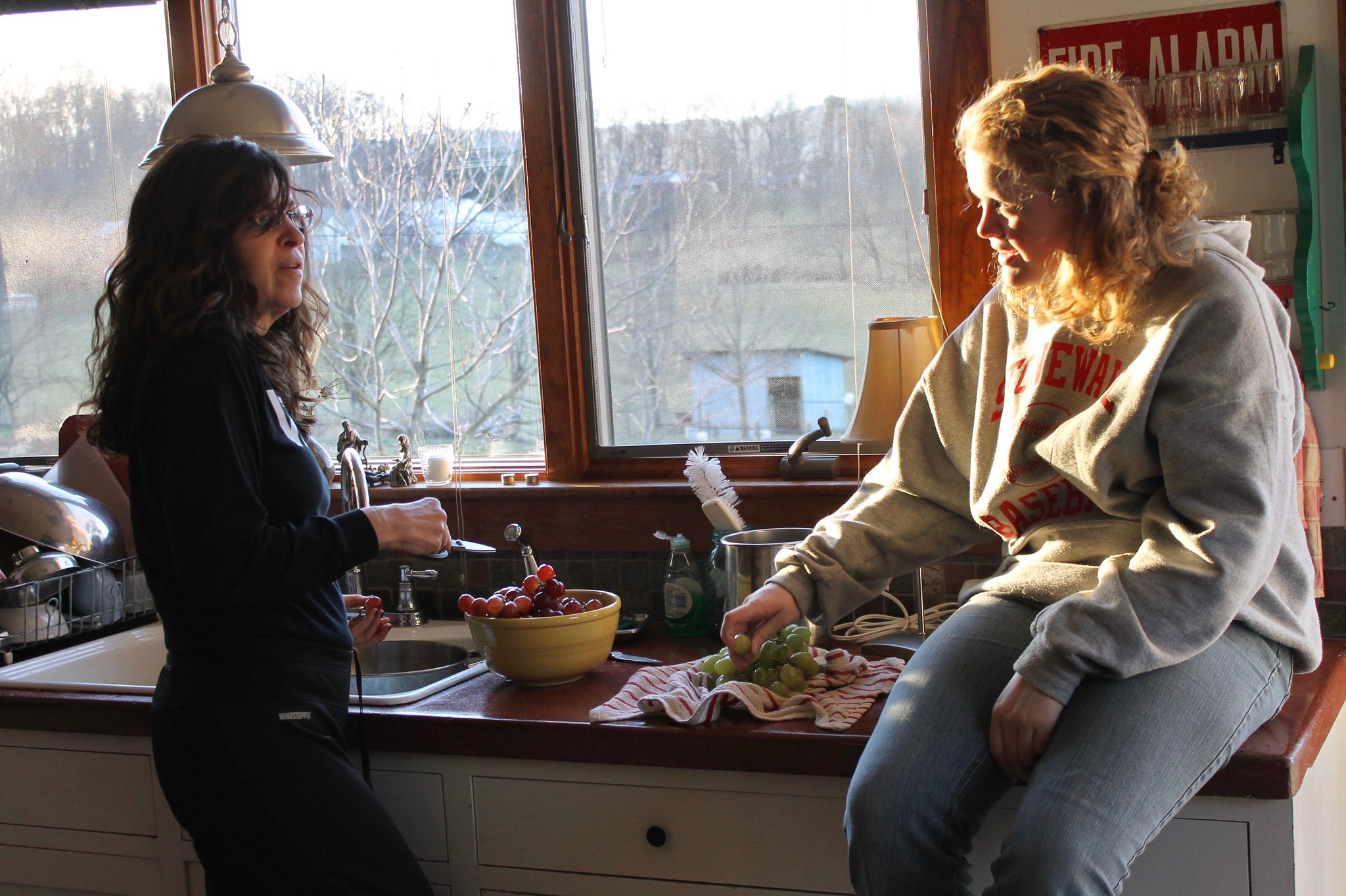 Supper was shaping up to be quite a feast. Days earlier, my Pittsburgh brother and his wife had had a serrano ham, great hunks of Swiss raclette cheese, and a cheese melter delivered to our house. My other brother provided the roasted butternut squash and onions and boiled potatoes. My aunt brought the fresh fruit, olives, and pickles. I made a giant green salad, the bread, and roasted brussel sprouts. My younger daughter and her cousin made the cakes.

Mom and Dad arrived at supper time, much to the children’s giddy excitement (kids are such a hoot!), and then my aunt walked out of the bedroom where she’d been hiding (and did surprise my mother, I think), and then we plugged in the cheese melter and set about the serious business of eating. 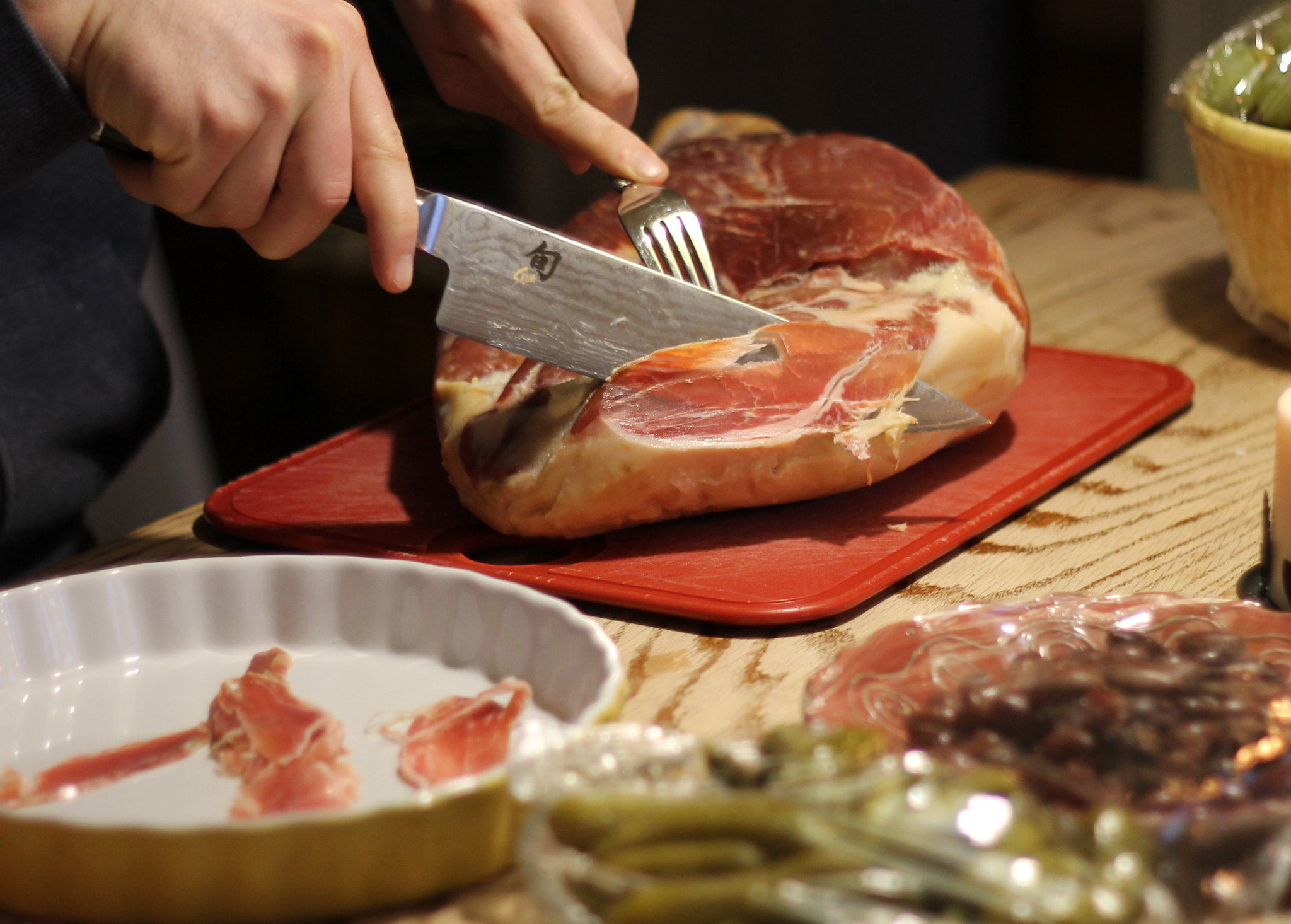 It cut like butter (especially when using the new knife) — sooooo good!

After we’d stuffed ourselves sufficiently, we presented our songs — one song for each decade of her life: starting with a Bible School song and ending with We Are The World in honor of her refugee work.

Then the cakes, which were sort of complicated. The plan was to trick her with the first cake, a “fake” one that’d she’d ooh and ahh over and then we’d be like, Ha! It’s a box cake!, but what with the singing and all the candles, juggling secrets, lies, and two cakes were way too complicated. So the girls presented her with her “fake” cake and we sang and yelled at her to cut it and take a bite because, unbeknownst to my mother, my aunt was in the back room trying not to burn the house down with the real cake (also made by the girls) that she’d crowned with 70 honest-to-goodness candles. So my mom took one bite of the fake cake, my brother did a key shift on his guitar, and we sang happy birthday a couple more times while my aunt carried out the flaming cake, and then I told the girls to explain the cakes when what I meant to say was explain the second cake but too late and oh well. The seventy candles were massively impressive, the real cake was a little boring, and the fake cake got devoured, ha! 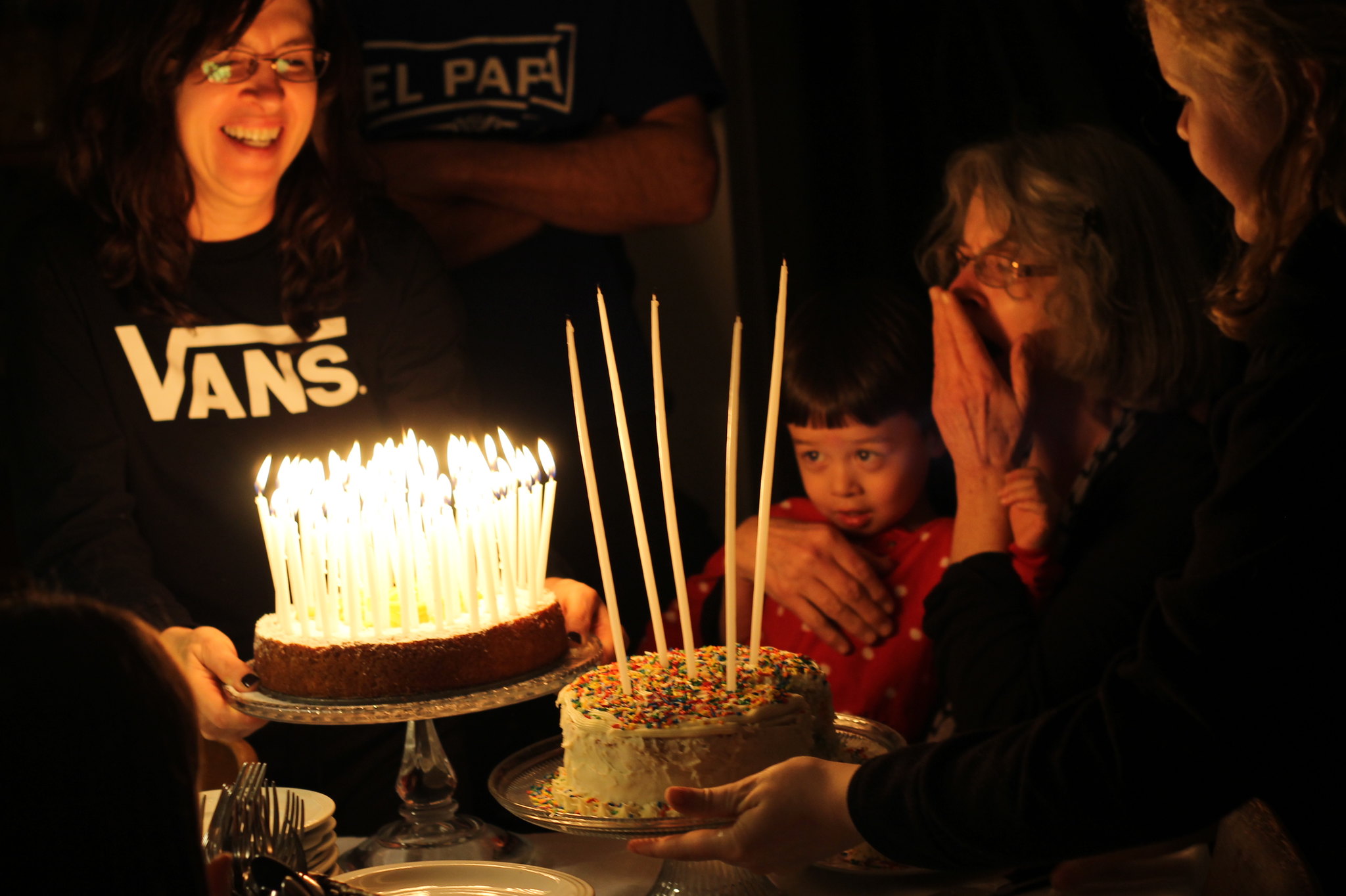 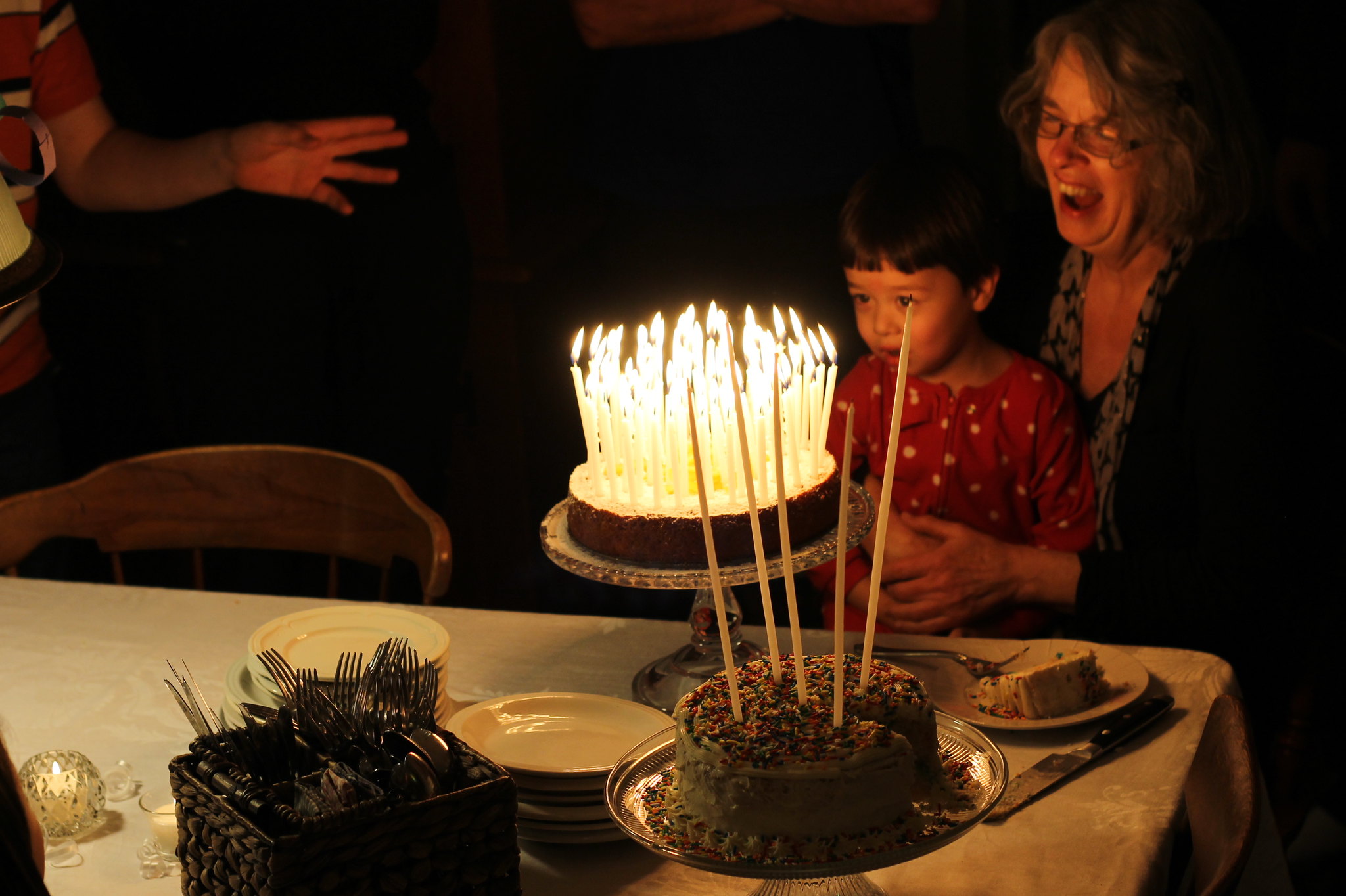 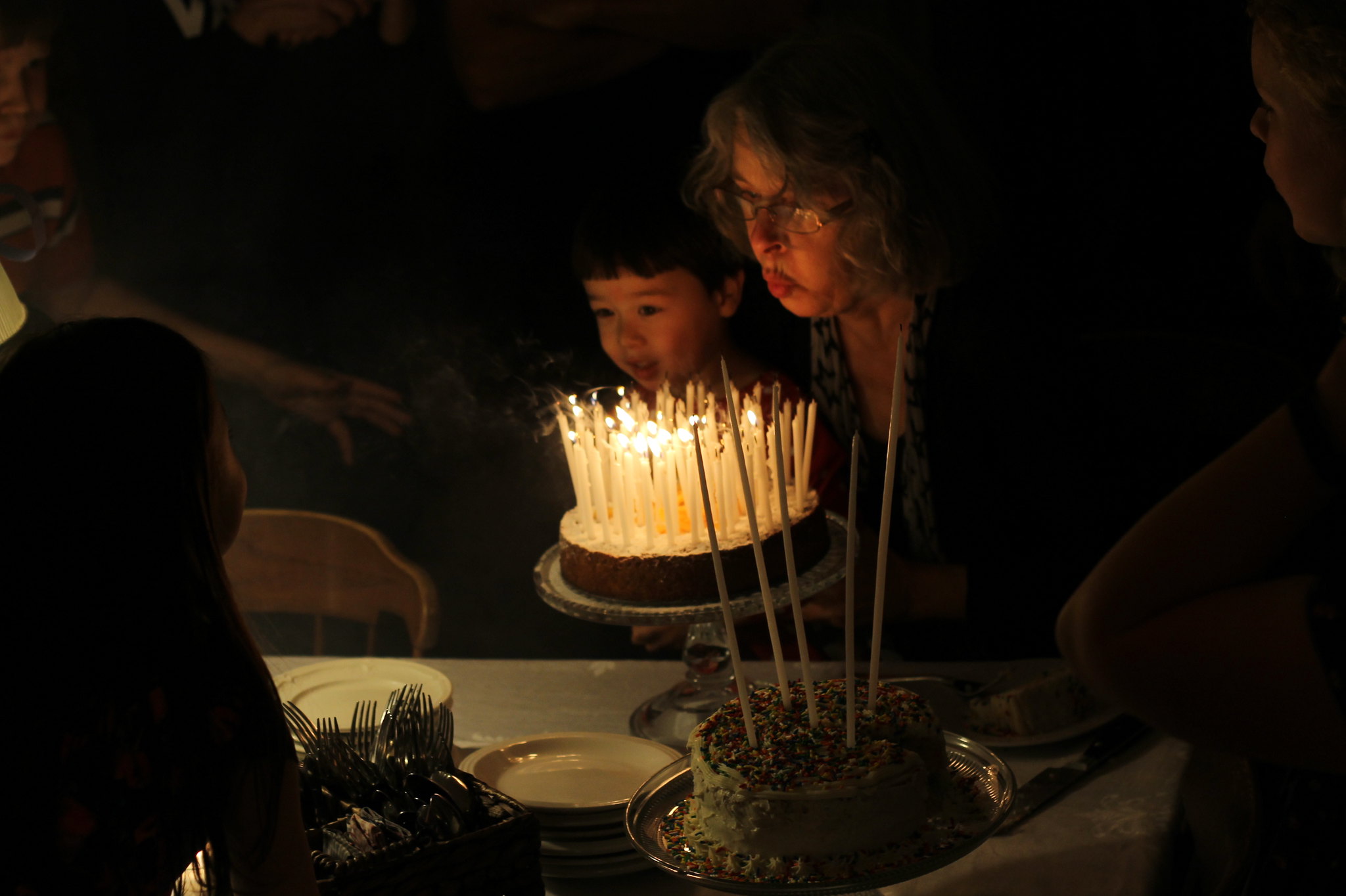 Then, just when all the hubbub was dying down, my aunt ordered my mother into the bathroom where she dressed her up a slinky black dress, heels, sunglasses, and a wig. 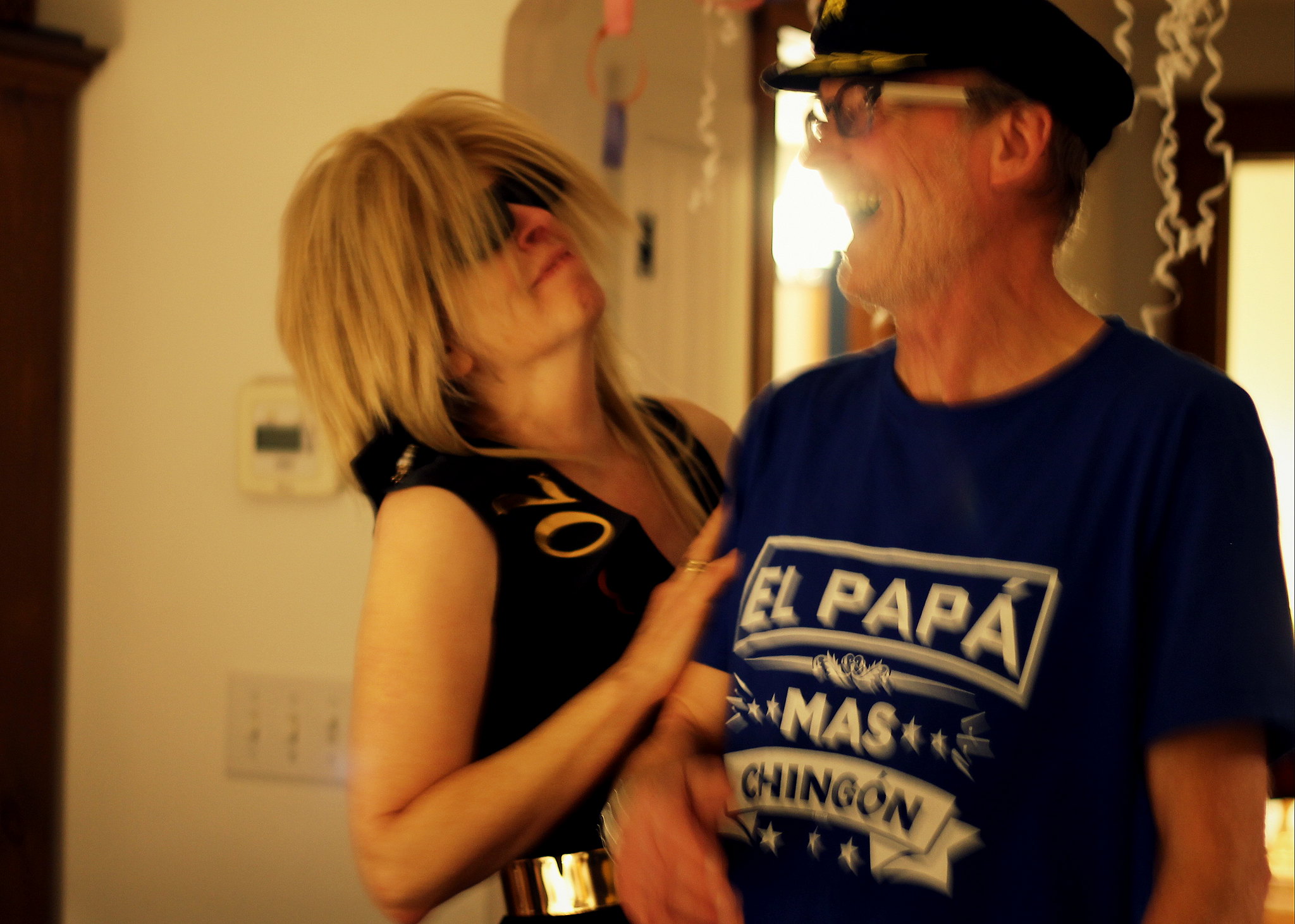 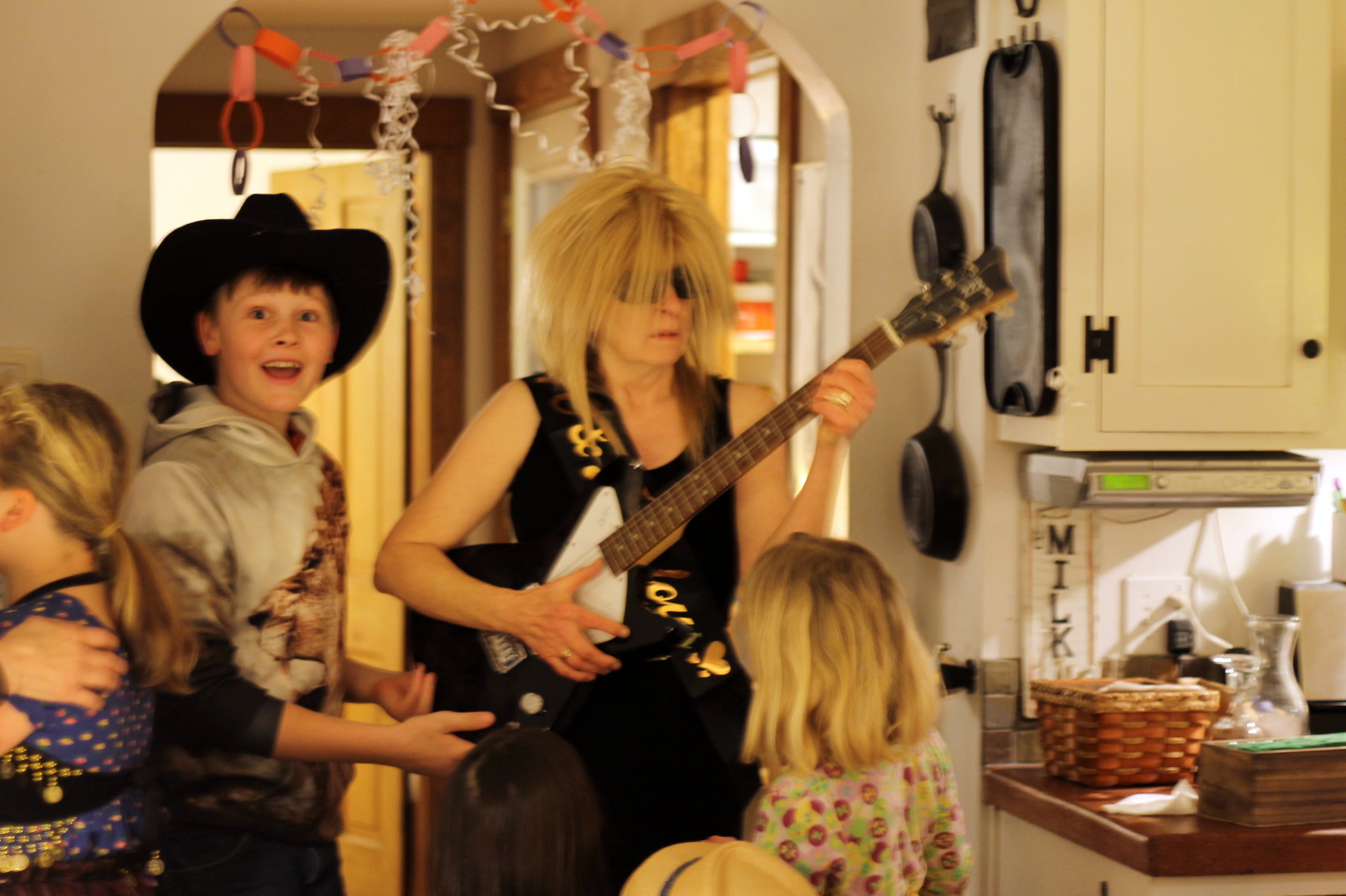 The kids dressed up in whatever they could find, and my older son set up the polaroid camera that my sister-in-law had brought for a photo shoot. 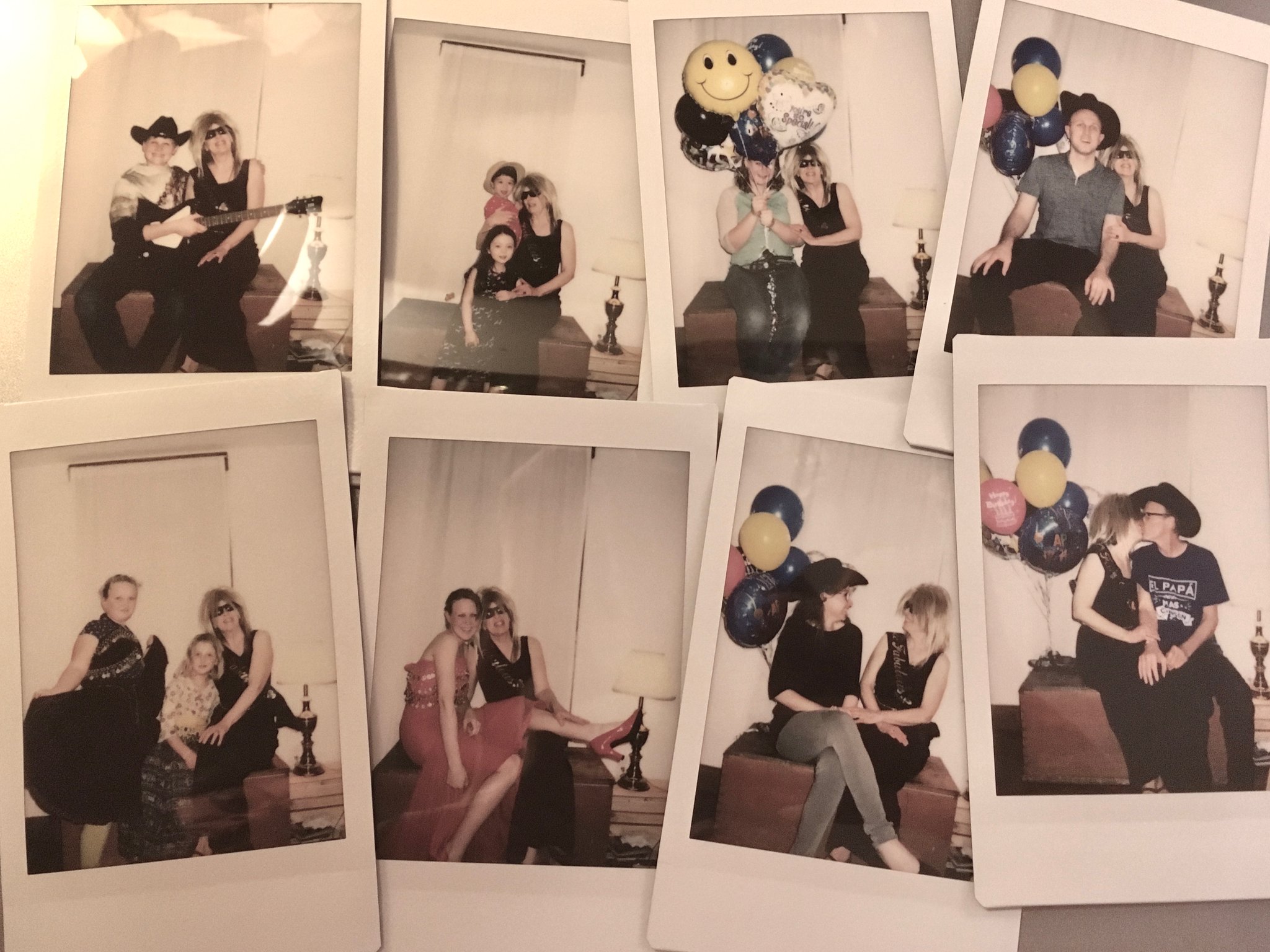 To quote from my older son’s birthday card to my mother:


Happy 70th Birthday, Grandmommy.
Soon you will be old! 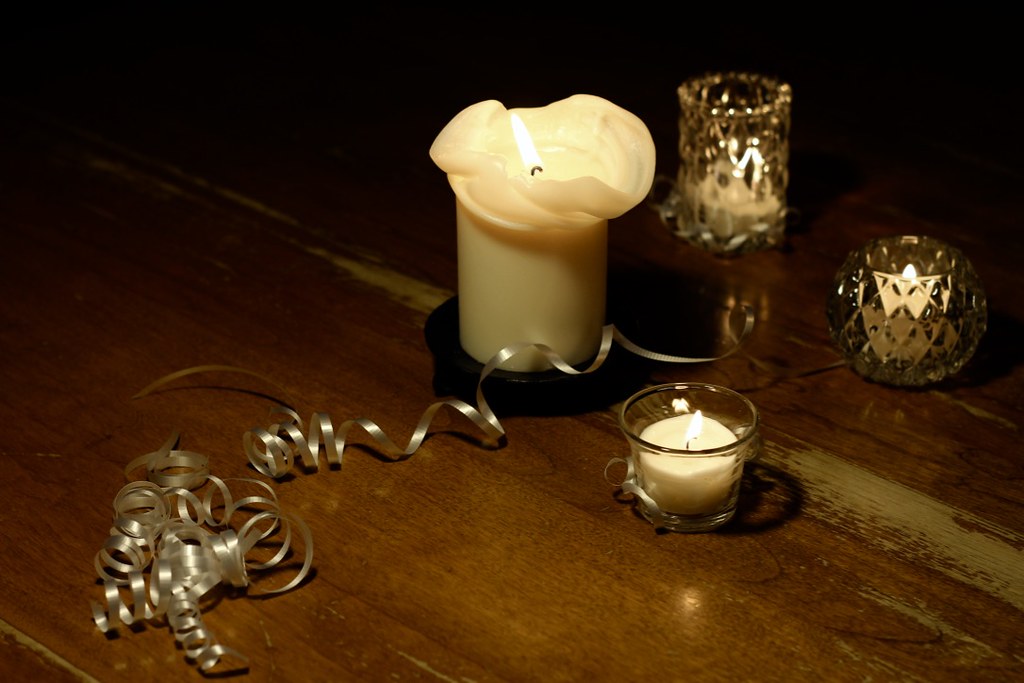 This same time, years previous: ludicrous mashed potatoes, 2016 book list, the quotidian (12.21.15), on my to-do list, how to have a dunging-out date, toasty oatmeal muffins.