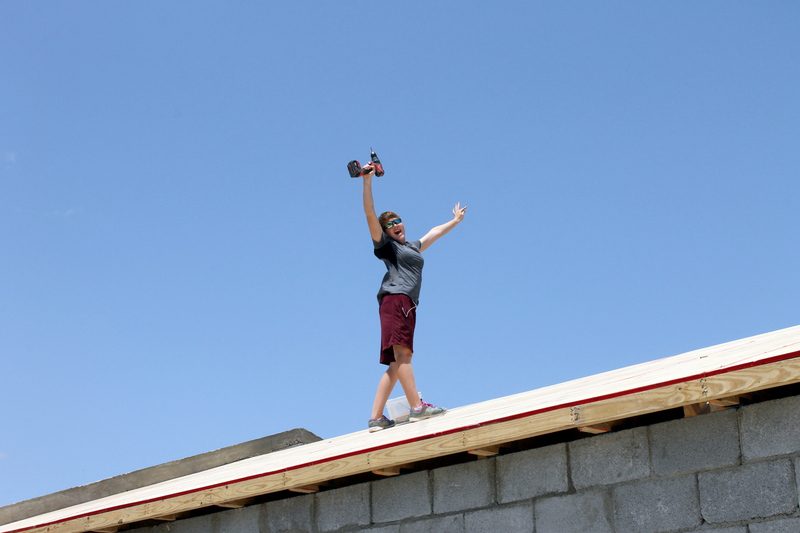 Lately I’ve been having persistent, crushing feelings of being trapped. Sometimes these feelings are so intense that I’m nearly frantic with panic, like when I was in the final stages of labor, desperate to escape my body, to claw my way out of my skin, but couldn’t.

This trapped feeling stems from a number of factors, I think, but the biggest one is — drumroll, please — the heat. It turns my thoughts dark, it does. I think about India and the melting roads. I think about the ever-expanding desert and the shrinking rain forests and the oceans full of trash. My mother tells me about how air conditioning is just compounding the climate change problems — it’s a vicious cycle, she says: It gets hotter, we use more AC, it gets even hotter. Facebook doesn’t help. Everytime I scroll through, I see photos of wildfires and read reports of world-wide record-breaking temps and watch videos of children crying because it’s too hot. We’re being cooked alive, all of us. The suffering is just beginning.

Here, the heat dominates our lives, interrupts our sleep, sucks our energy, kills our appetites.

Exhibit One: My older son sleeps in the air conditioned trailer with the volunteers when he can. My husband’s spent the last two nights sleeping on the couch. I wake every couple hours all night long,

Exhibit Two: None of us are hungry anymore. My husband’s breakfasts have gotten progressively, worrisomely, smaller — he’s down to a small scoop of granola with some cheerios on top, and some mornings he can’t even finish that. I eat because the clock says I should, or for entertainment’s sake (it still tastes good), but rarely because I’m actually hungry. 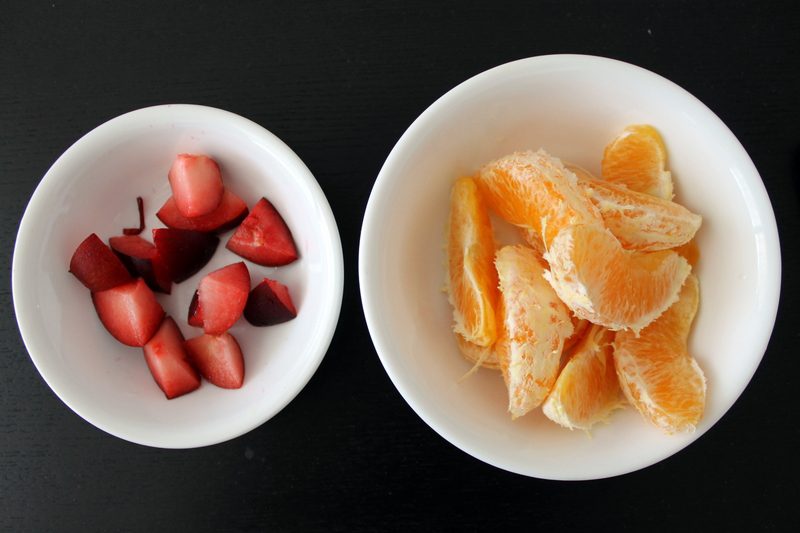 And then, because I wasn’t hungry in the first place, I feel bloated, which, in turn, makes me feel even more uncomfortable. (Weirdly enough, no one’s losing weight, humph.)

Exhibit Three: Driving around town in an air conditioned van, I get bold. When I get back to the house I’ll teach myself to make Puerto Rican rice with sofrito and bacon, I think. Or, I’ll experiment with café colao, or, How about I bake a coffee cake to take over to the volunteer trailer! Or, Oo-ooh, I know! Pepperoni rolls!!! But then I pull into the garage, step out of the van, and the heat hits. The air is like blood — thick, sticky, hot — and suddenly all my great ideas are gone, nowhere to be found.

And then, as though all this wasn’t enough, I (stupidly) get sunburned. 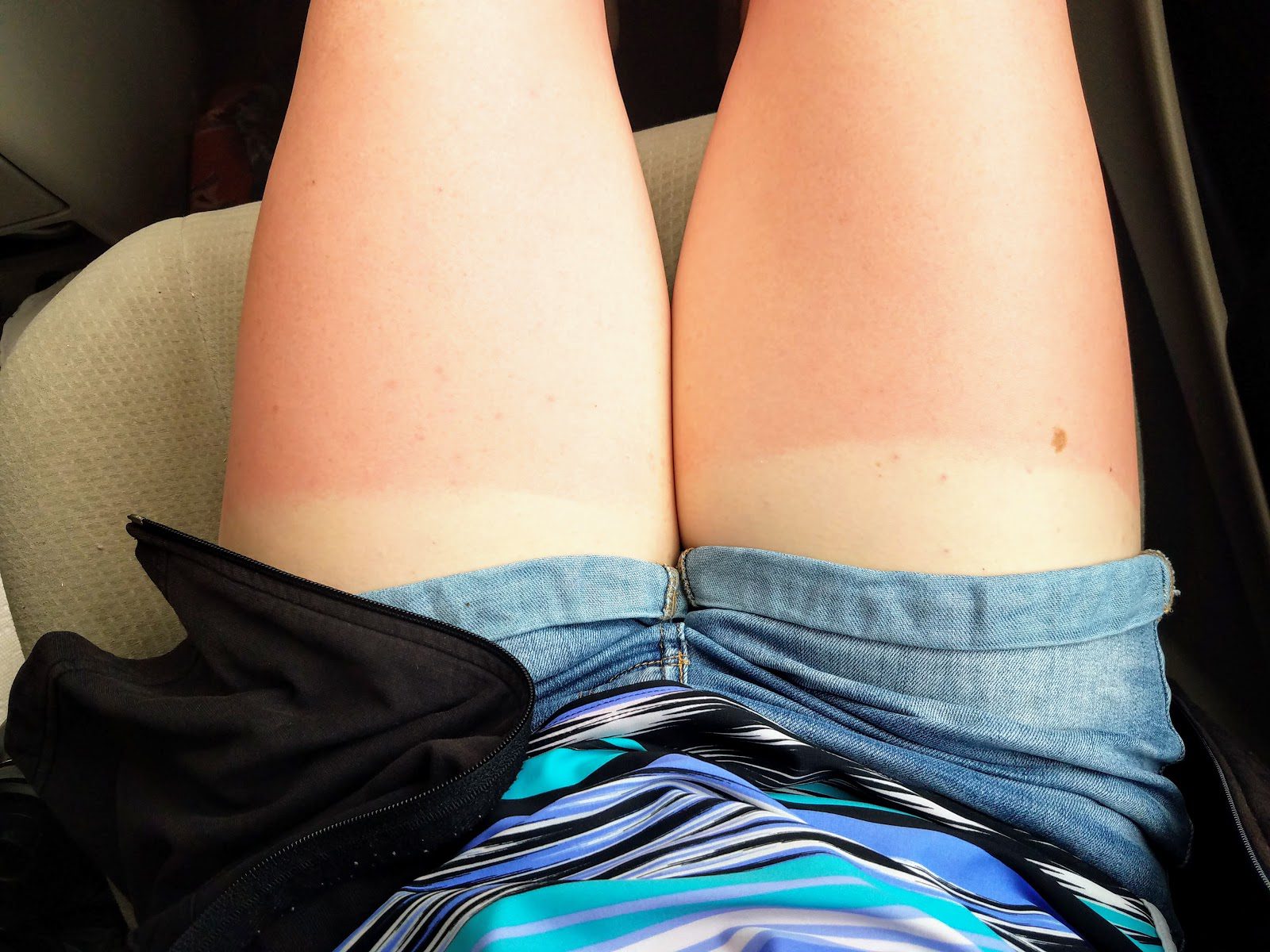 Now the world really is on fire. My skin is actually burned. THE WORLD IS ENDING.

Actually, two nights in a row I dream about the end of the world. I wake up disturbed, hot, and in pain. I can’t kick the distinct feeling that the nightmare is real. We are doomed.

Now, to be clear, it’s not THAT hot. The pavement is still stuck to the roads. The fields only occasionally burst into flames. There are no children crying about the heat around here, only adults (clears throat). 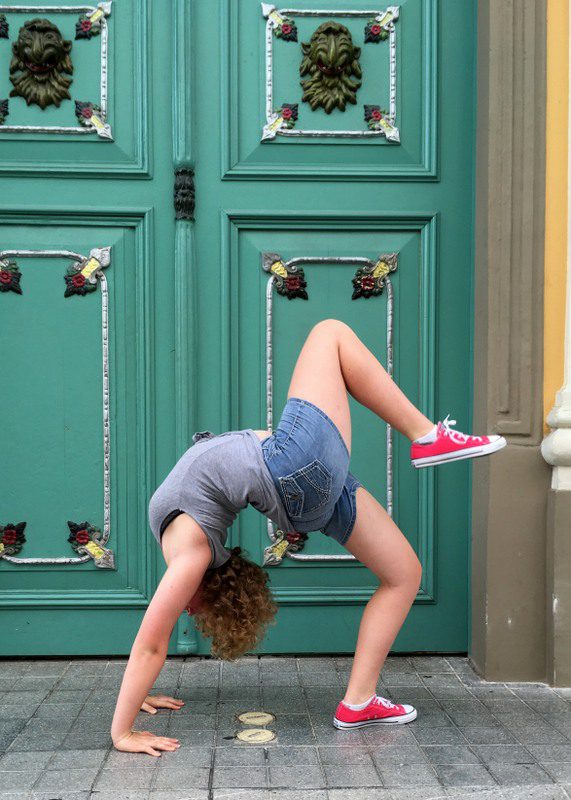 To keep perspective, I remind myself that I’m not wrapped in a corset and bonnet, and I’m not selling bottled water on a street corner. Heck, I’m not even working on a roof like my husband and older kids. Truly, truly, in the big scheme of things, this is nothing.

Still, I am going slightly crazy, so it’s not completely nothing. 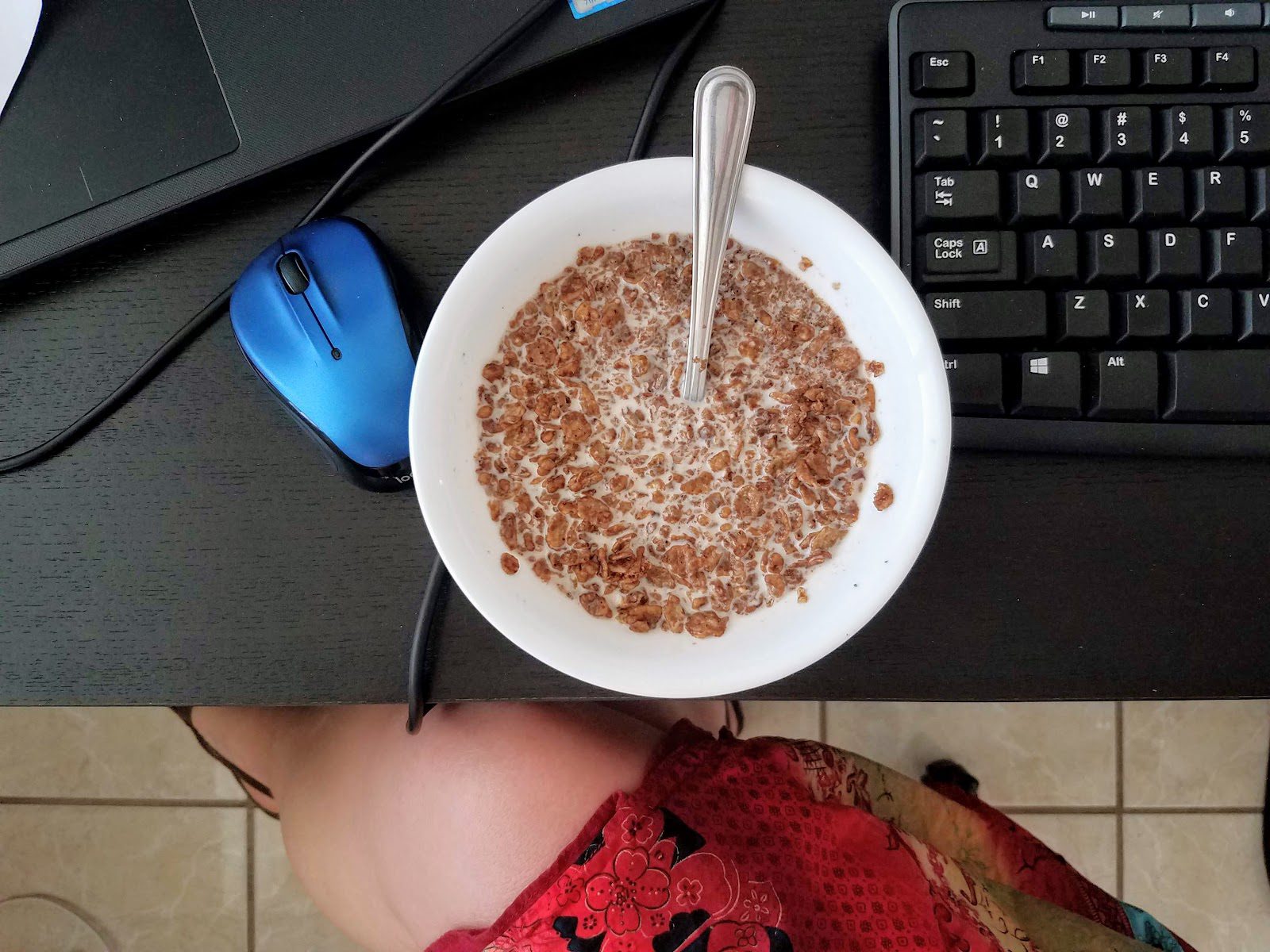 Heatwaves happen in Virginia, of course, and they give me weather-induced panic attacks there, too (because this is how I roll, apparently), but back home, the temperature fluctuations are bigger. Here, there is no real break. It’s just day after day after day of heat without end amen.

There are two other things that contribute to my feeling of being trapped. First, I’m just now figuring out, at the ripe, old age of 40-something, that city living is not my cup of tea. 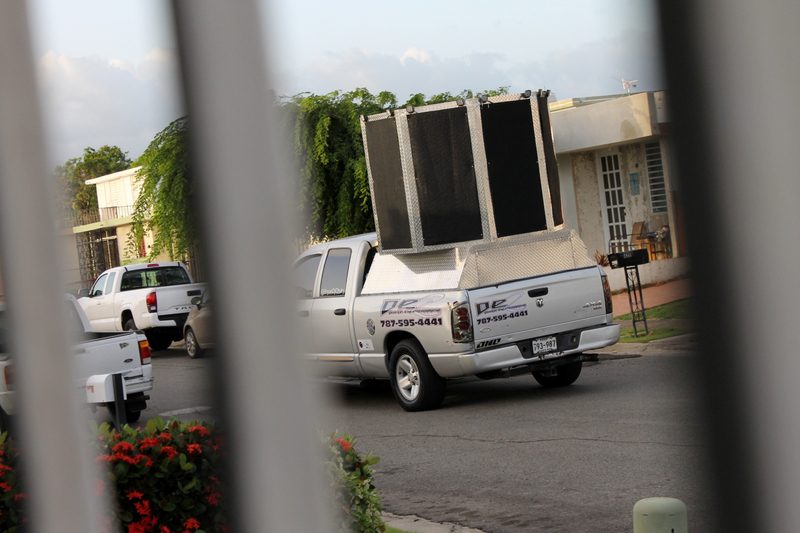 Drowning in concrete, highways, and metal bars, removed from shade trees and open fields and grass under my bare feet and the garden (that I love to hate), I find myself slipping into the role of passive consumer. Since we’re not set up here for the at-home growing, producing, and making (that is, of course, boring and dull and tiresome in its own right, but boy, do I ever miss it something fierce right now), in order to have fun, we either need to go out (and spend money) or do something with people. Any solitary, at-home projects have to take place in the (hot) indoors which, in turn, only intensifies the feeling of being trapped. (Which is kind of a lose-lose situation for those of us who are active introverts, cue tiny violin.)

Second, for these four months, we are all — all six of us — focused on the same project, and even though it’s super special to get work together like this, after awhile the monofocus does grow a bit wearisome. The lack of diversity in our daily activities — because we have, for the most part, shelved our personal interests, projects, and goals — depletes our collective energy.

The kids are rolling with it. 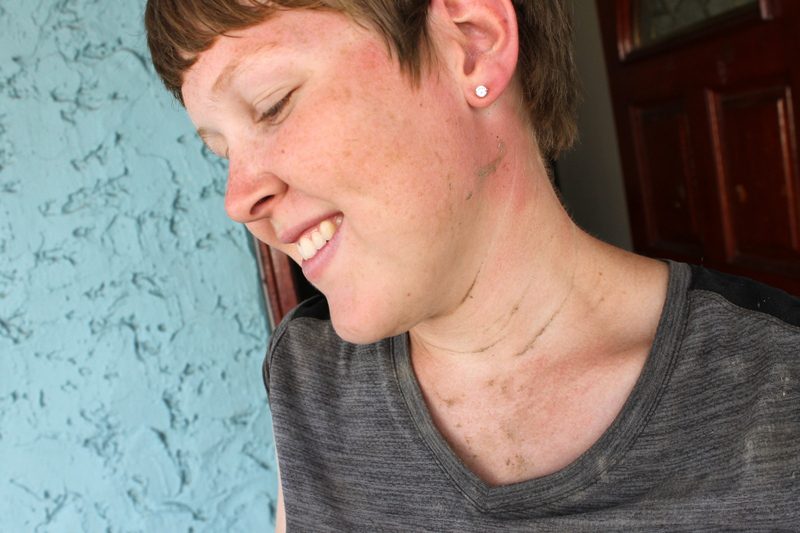 The older two, especially, are quite ready to once again drive cars and muck out stalls and earn money and see friends and take classes, yet they continue to wake at six (cheerfully!) and put in day after day after day of hard labor in the blazing sun. Champs, they are. 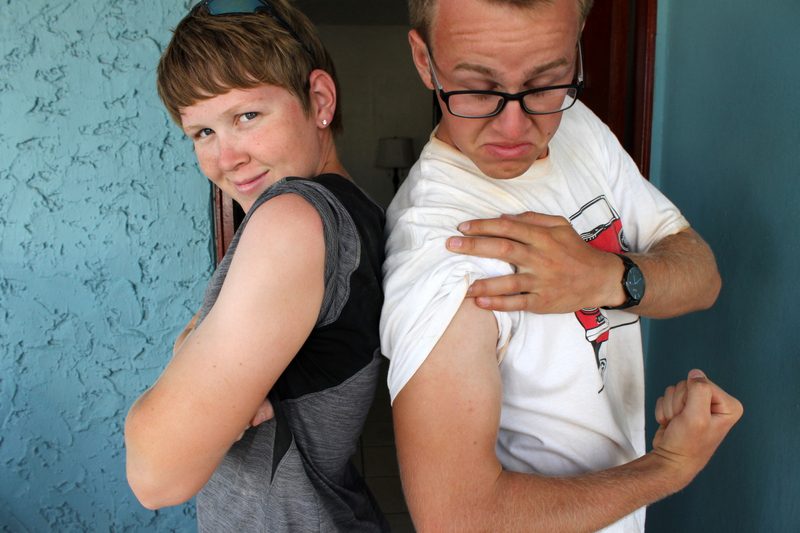 I hesitated to write about this part of our work — the emotional and physical toll it’s taking on us — lest I come across as whiny (I am) or pathetic (perhaps, sigh). Maybe it’d be best for me to just suck it up and say nothing at all?

Thing is, talking about the hard stuff often strips it of its power. And wouldn’t you know, just writing this out, I feel better — a little lighter, a little freer, a little stronger, whoo-hoo!

Or maybe I just feel that way because today is overcast and a balmy 92 degrees?

Who knows. Either way, it’s an improvement. I’ll take it.

P.S. While writing this, my younger son came out of his room to proudly report that he’d figured out a way to have two fans blowing on his top bunk: there’s the one that he’s dangled by a rope in front of the window, and now he’s placed another one — a standing fan — on top of the bedside table. 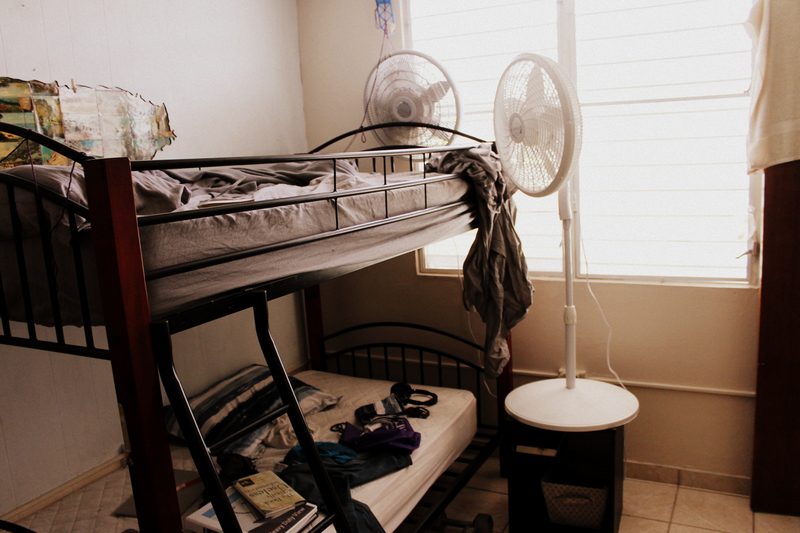 The struggle is real, people. REAL.