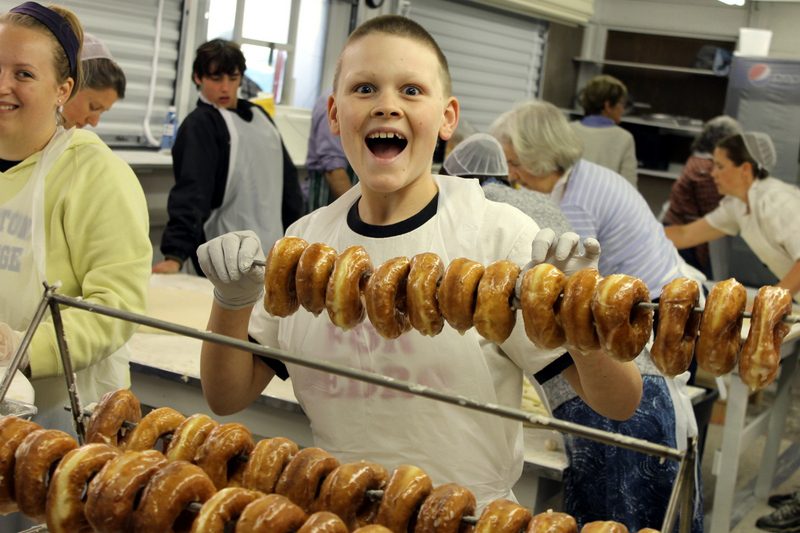 So, once again, we made a few donuts…

We haven’t yet figured out a way to count the donuts (that’s one of next year’s goals), but one of the volunteers operating a fryer, a thirteen-year-old boy who flat-out rocked his job, kept a running tally. He reported that in three hours he fried 1500 donuts. Going by his numbers, that’s four fryers for three, three-hour shifts. In other words, 1500 times 4 times 3 equals 18000. 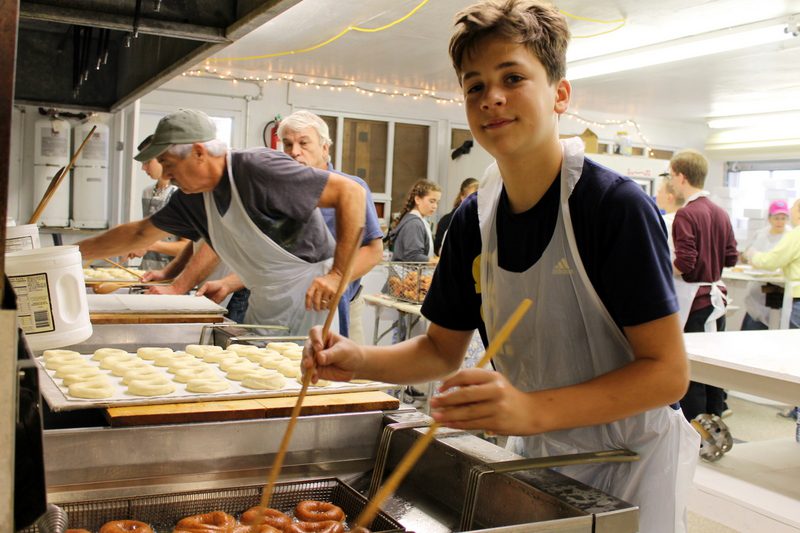 However! There were a couple (brief) times when we weren’t using all four fryers, and it did take us about an hour to get fully up to speed, so, to be on the safe side, I’d say we made more like 16000-17000 donuts.

So you know, just a few. 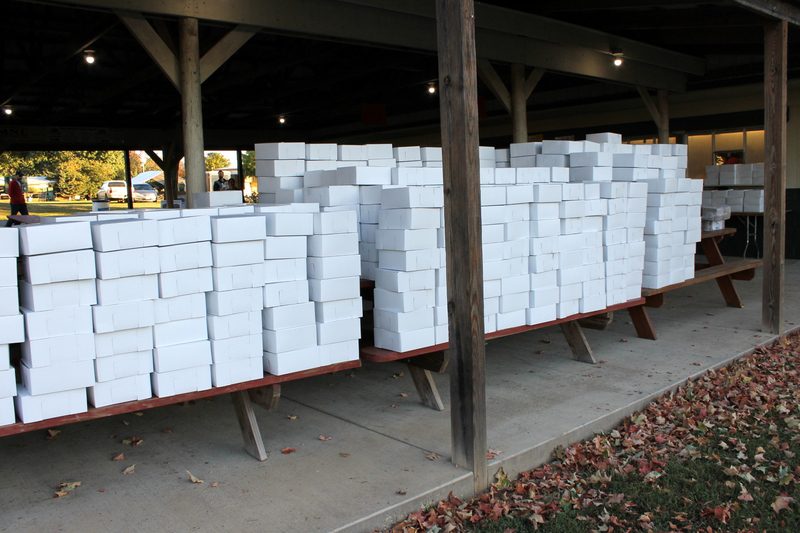 waiting to be filled

The whole process went amazingly smoothly this year. We had no fiascos—

Well, except for that one moment on Friday afternoon when a particularly assertive child insisted that we dump 50 pounds of confectioner’s sugar in the mixer and then try to add the beater and we let it happen, because, Okay, you think you’re so smart? Then here’s a chance for a life lesson, HA. Of course, the giant metal beater got jammed in the mixer and full-grown men had to wail on the parts with hammers. It was so horribly suspenseful — WHAT WOULD WE DO WITHOUT THE MIXER???? — that I slumped down on the floor with my back to the mixer (my husband claims I was curled in the fetal position) unable to watch. They dislodged the part eventually (and found a metal burr that needed to be filed off), and everything proceeded as we had originally intended — beater first, liquids second, sugar third— with the children properly subdued and compliant. 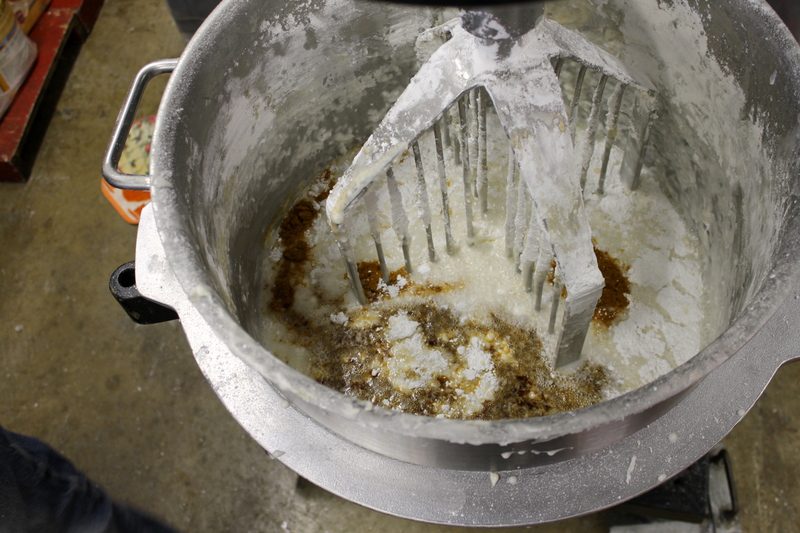 But aside from that, the process was pretty much a dream. And not a sleep dream, either. I was much more awake and alert this year, probably thanks to a four-hour nap Friday evening after supper, courtesy of a glass of wine and one-third of an Aleve PM. The older two kids were both granted permission to work in the night kitchen, so we were all back up at 11:30 to head out the door by midnight. 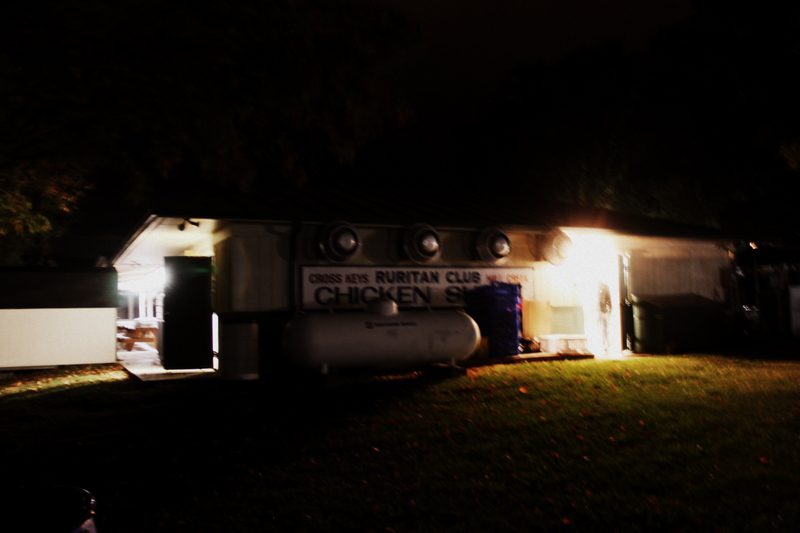 When we arrived, we flew into action, scalding milk, mixing the first batches of dough, making coffee. 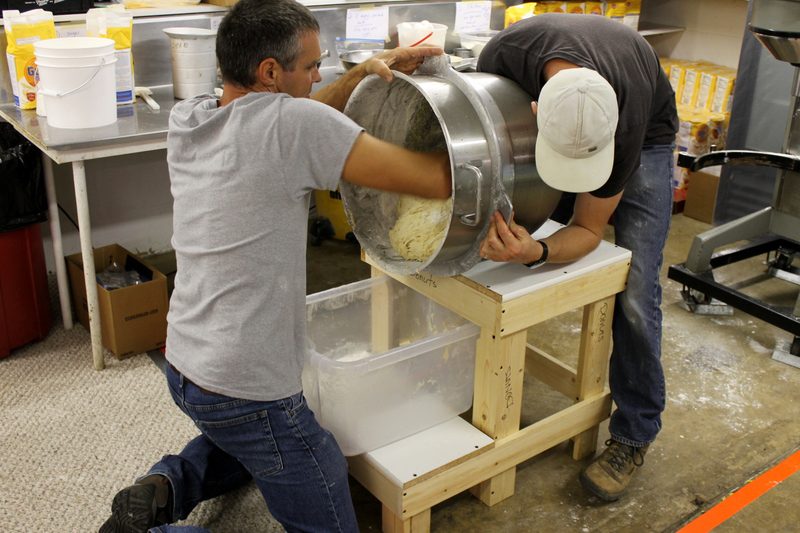 We’d left the heaters running in the little proofing room (and my husband had made a makeshift door with plastic strips cut from a clear shower curtain, as well as wrapped the tops and sides of the proofing box with plastic and nestled an electric blanket in the bottom), so when we arrived, the room was a toasty 110 (!!!) degrees. By the time the first volunteers rolled in the door, there were twelve five-gallon buckets of dough rising at a rapid clip, and the oil was heating in the fryers. 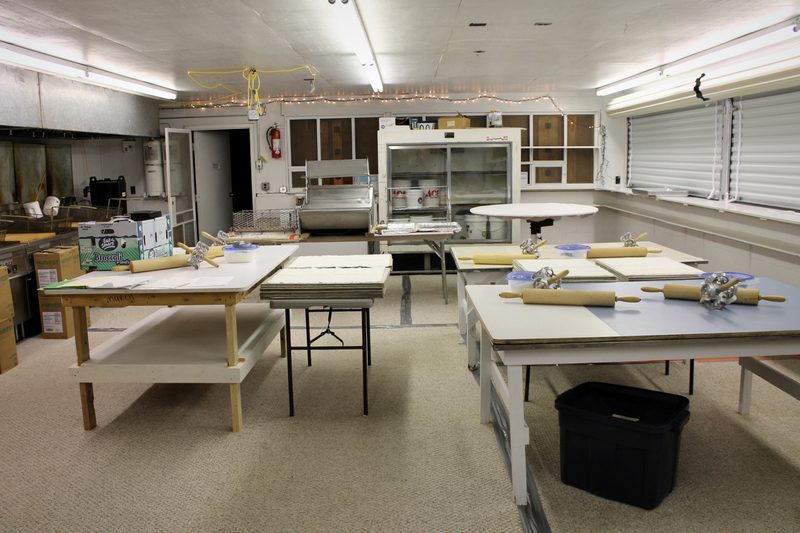 the calm before the storm

My older daughter worked the milk station for the first two shifts or so, scalding 43 gallons of milk with 86 pounds of butter and then blending it into the potatoes, all 172 pounds of them. 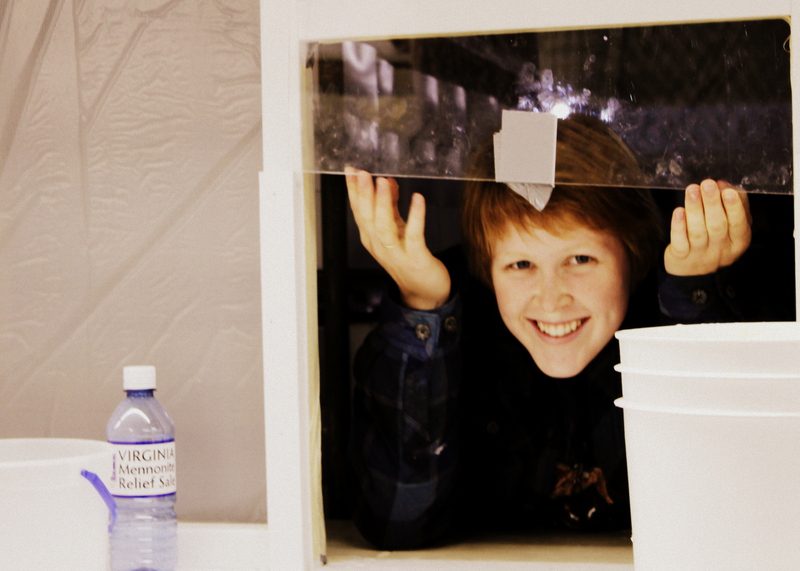 There were the typical start-up blunders — a milk over-flow, a sloshed bucket, a horribly scorched kettle — but then she got the hang of it. 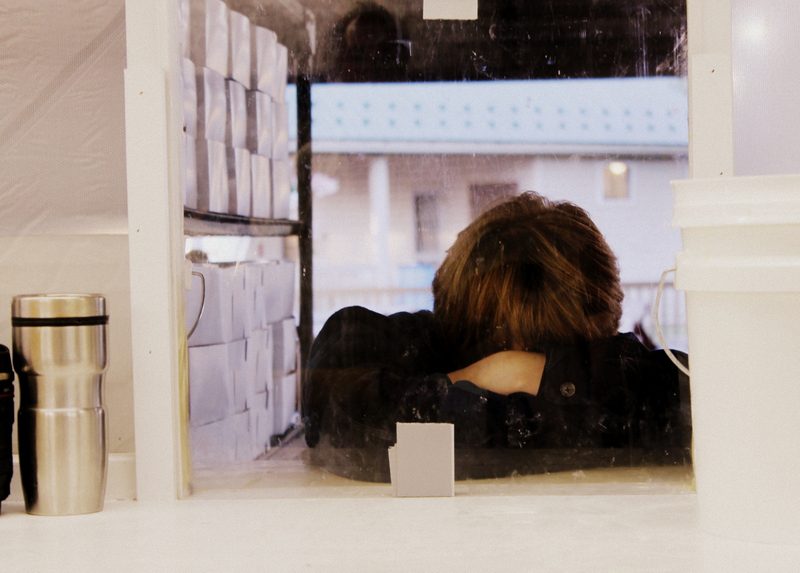 My older son worked the mixing station for the first three hours with an Old Order Mennonite woman. She measured and dumped, and he ran the mixer. He trained the next three women, and then … disappeared? I don’t rightly recall. But those three women! Clustered around the mixer, they reminded me of the three witches in MacBeth, huddled around a caldron, and when I told them so, they promptly commenced to cackling. 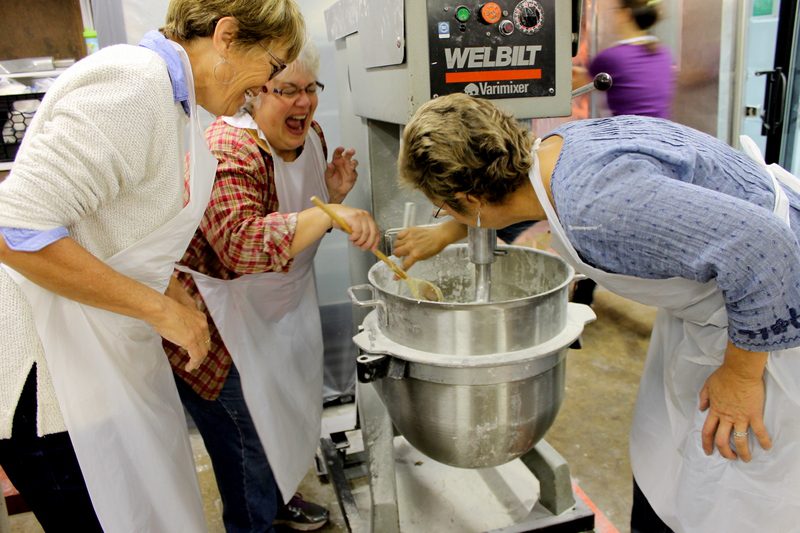 We cruised through dozens of volunteers — such thoughtful, hardworking, kind people! — and nine hours of mixing, rolling, frying, and glazing. 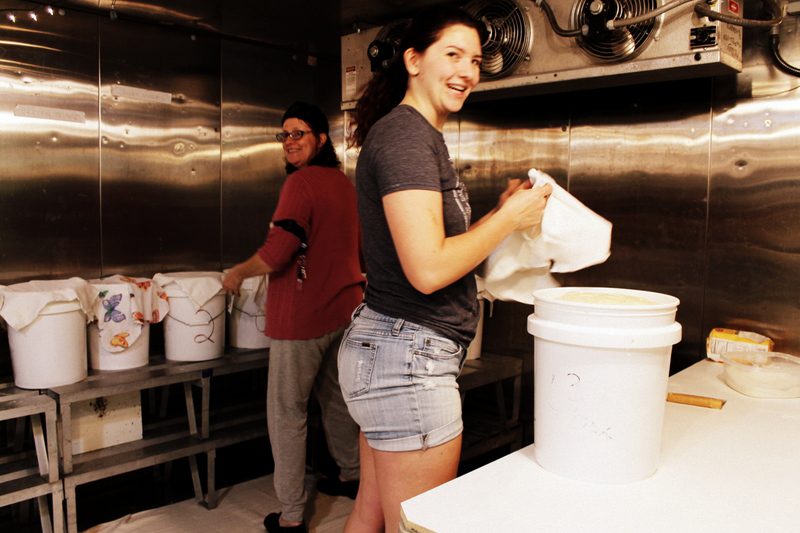 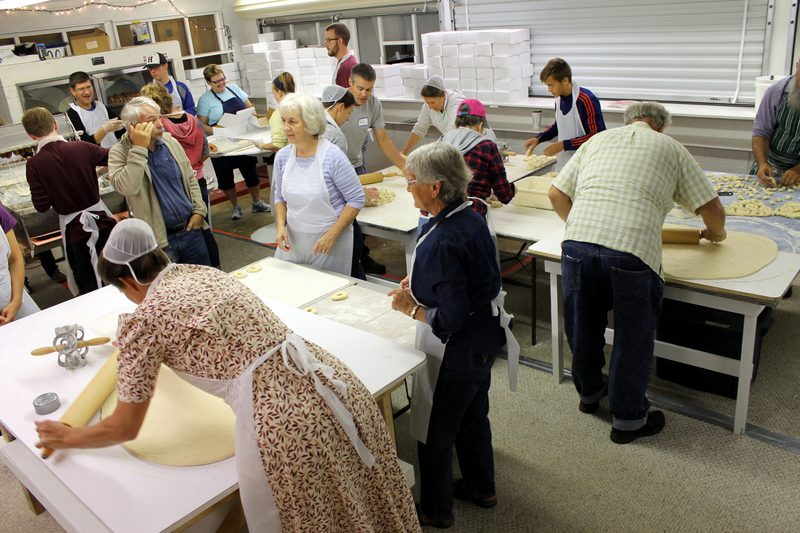 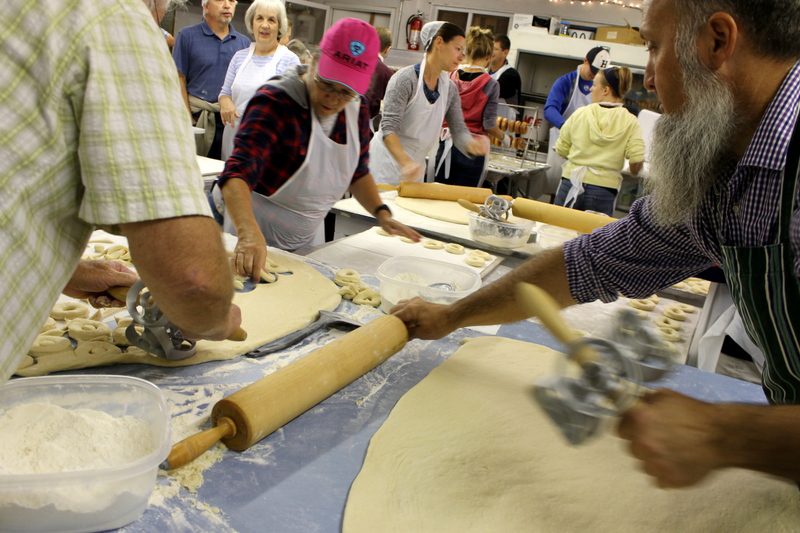 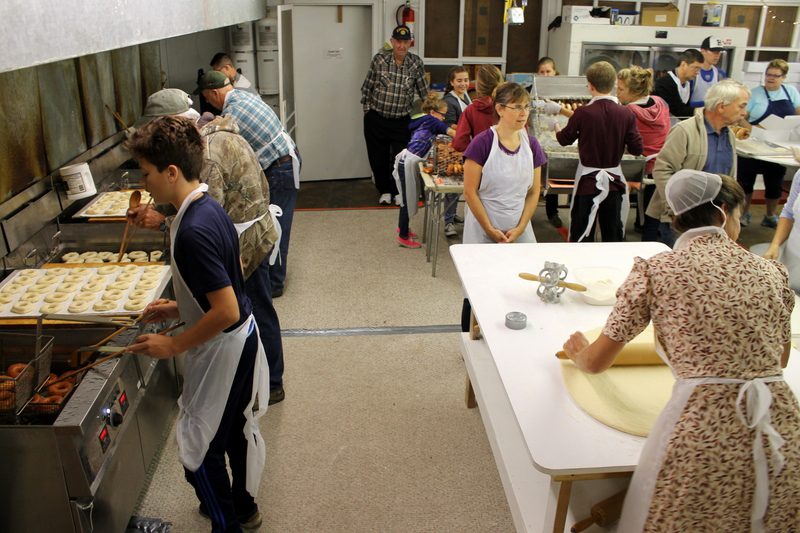 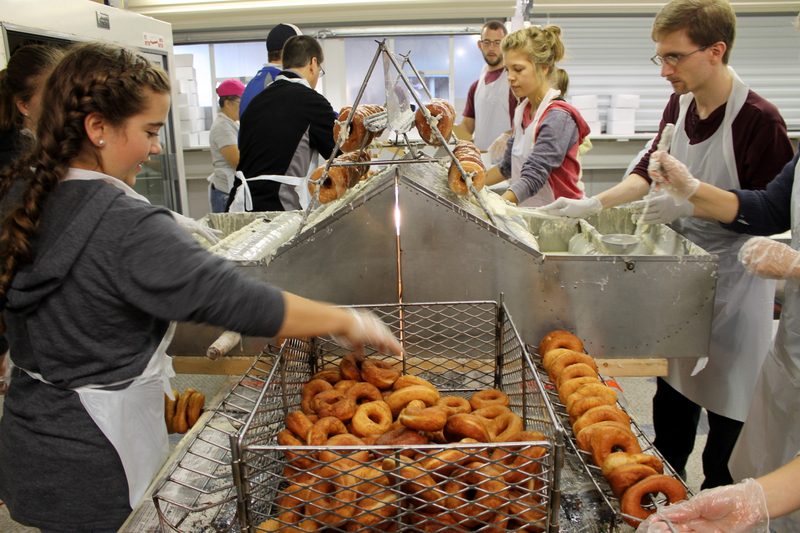 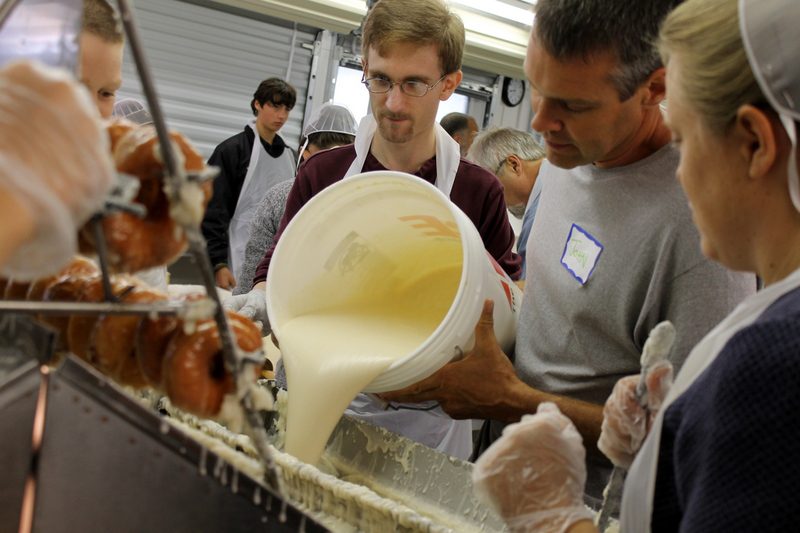 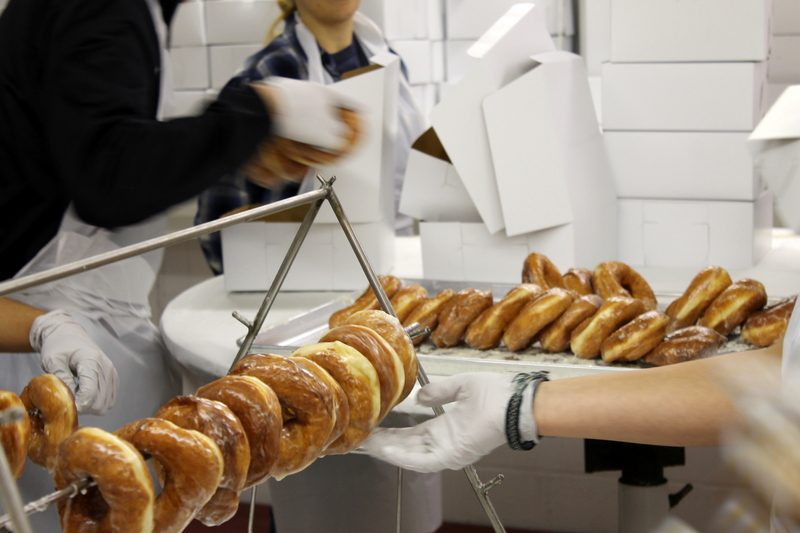 Then, right around noon, we realized that we were coming up a little short on glaze (plus, we’d inadvertantly made a little more dough than we could get cut and fried in the amount of time allotted), so with two batches of dough left to go, we had to quit. 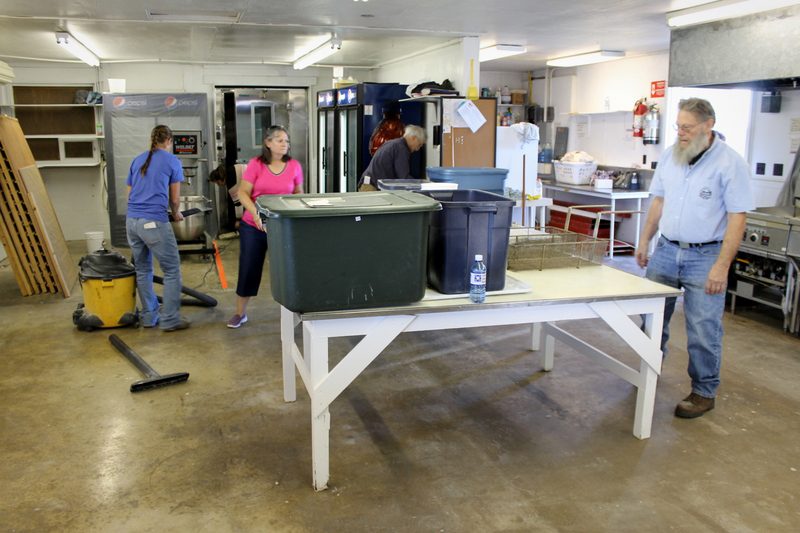 Last year we made too few (and took too long getting started) and this year we operated at maximum speed but mixed two batches too many.

So next year, fingers crossed, we ought to get it just right.

P.S. As I’ve mentioned before, I have a conflicted relationship with the relief sale: that we have to eat tons of food and buy oodles of stuff in order to help people in need strikes me as a little cattywampus. But then this year, a person in our community initiated S.O.S, or Sharing Our Surplus — a station where people could go to give money, no need to buy anything — and that felt good.

This same man went on to write a blog post pointing out that, while the purpose of the sale is to be compassionate to those in need, nowhere at the sale do we hear stories of the plight of those people. Instead, it’s all about what we’re doing, a competition to raise the most money. Maybe this, that the givers aren’t connected to the receivers, is part of the reason the sale often makes me feel uncomfortable?

In any case, it’s nice to know that I’m not alone in feeling unsettled about our beloved money-raising tradition.

P.P.S. If you’d like to get an idea of where the relief sale money goes, take a peek at our friends’ blog: simply-told stories and stunning photos of life in Ethiopia. Seriously, the photos are breathtaking. Check out these camel shots!