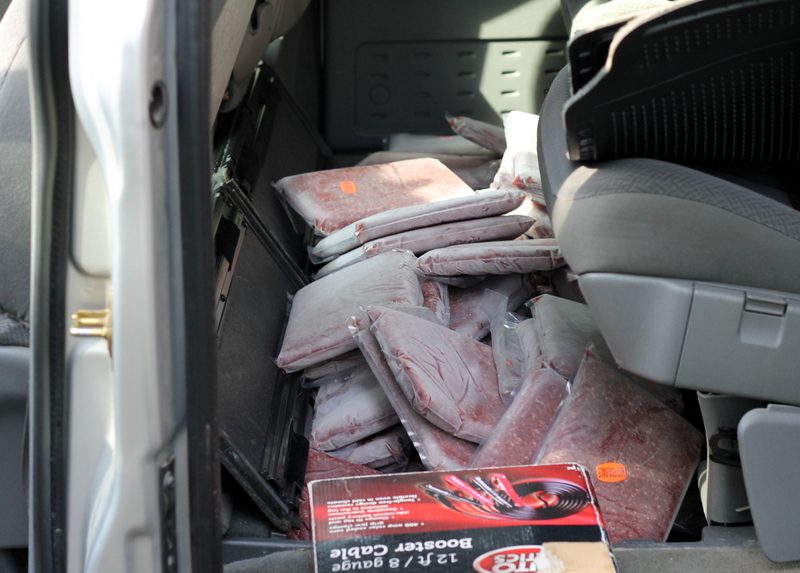 When the woman from the butcher shop called to tell us our meat was ready, she said, “Don’t forget to bring coolers,” which made me chuckle. What kind of family would have enough coolers to haul two steers-worth of beef? It seemed unlikely that they would just hand over two steers in loose, frozen packages. Still, to be on the safe side, we put a couple large coolers in the van, along with some big boxes.

It’s good we did, too, because the meat was loose! The workers rolled it out in wire-mesh baskets, handed us some pairs of gloves (thank goodness!), and then let us get on with it. We filled the coolers and all the boxes, and then we opened the under-the-floor compartments, spread out an old blanket, and piled in the frozen packs of meat. When we finally hopped in the van, we cranked up the AC, and, giggling maniacally, lit out for home. Whenever we went around a turn, the loose packs of meat slid from one side of the car to the other, which just made us laugh all the harder. 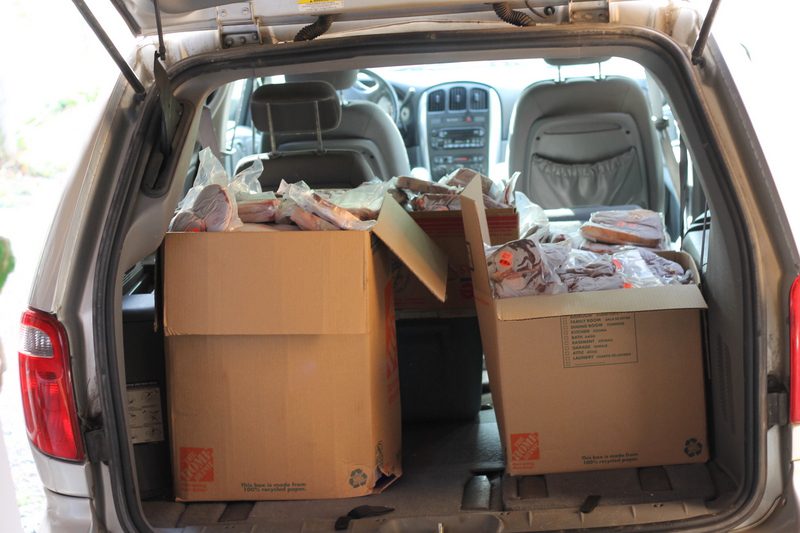 The kids met us with gloves, bags, and notebooks and pens for tallying the meat. We worked fast, loading the three freezers, counting and sorting, arguing constantly. 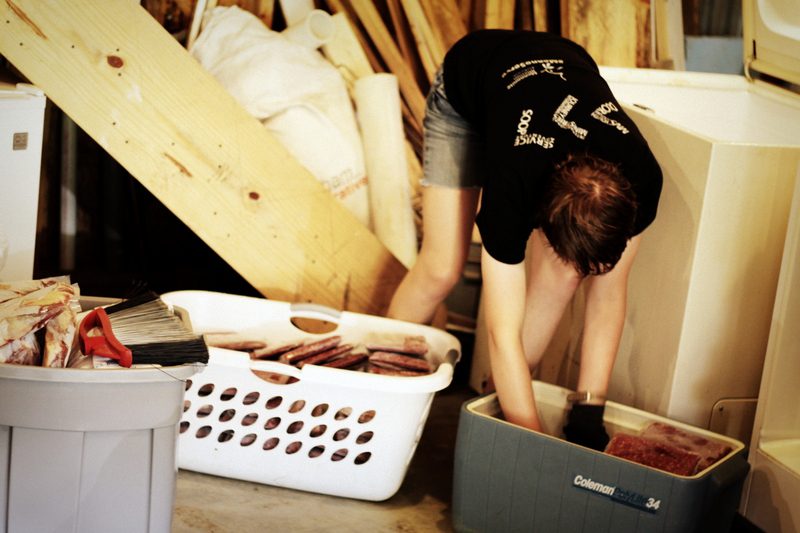 Terrified the freezers might not work properly, we placed buckets of paint on top of the chest freezers to keep the lids from popping open, and in front of the upright freezer, we wedged a bucket of spackle. 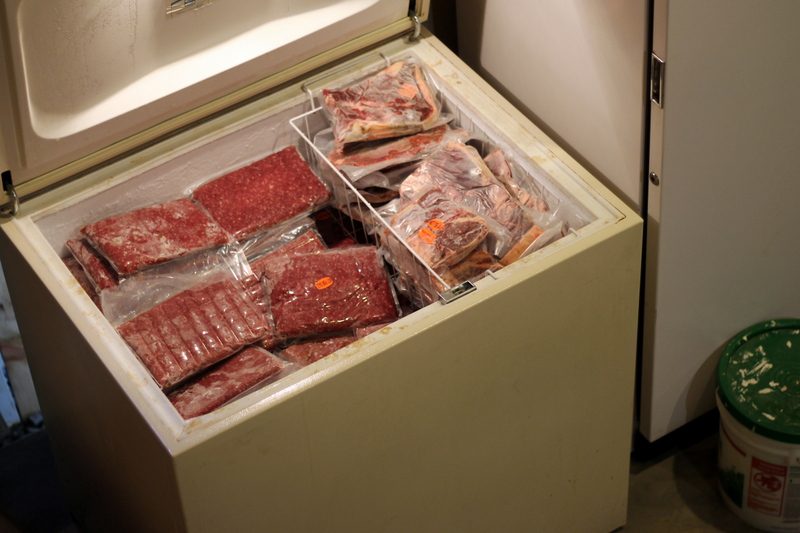 381 pounds of ground beef, plus some steaks 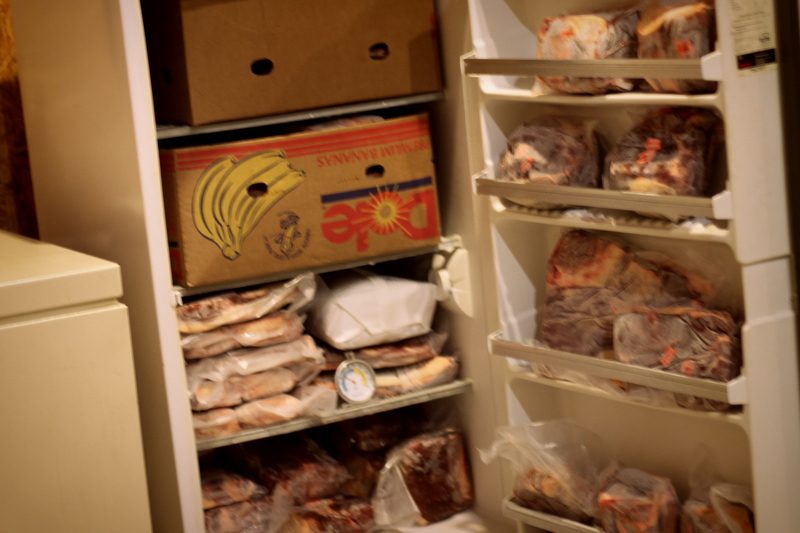 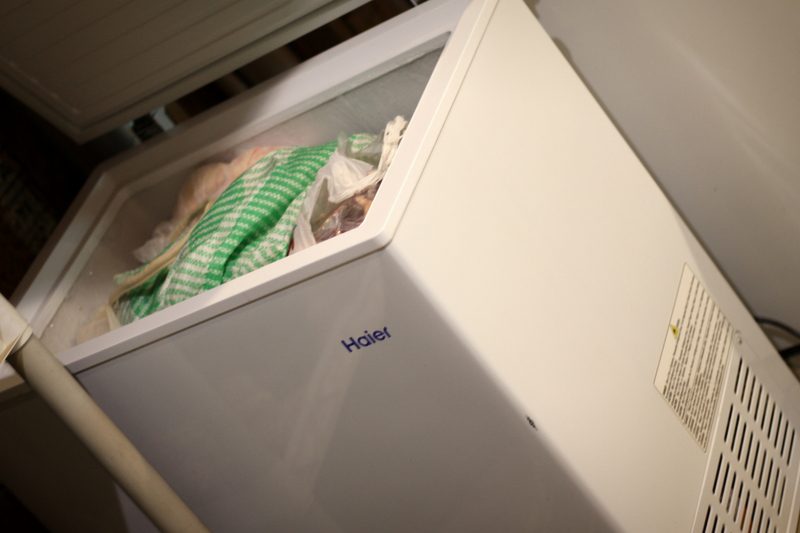 soup bones, cube steaks, minute steaks, liver, stew meat, beef fat
(and there is a little more meat in another freezer, too)

By the time we were done, I was a sweaty mess and everyone was grumpy, mostly because my stressed-out husband had been so dang nasty-bossy. Back in the kitchen, I leveled him with a scorching glare and then followed it up with a stern lecture on teamwork and productive parenting. The meat-packing stress gone, he immediately turned contrite. “I’d do a much better job in a communist society,” he explained, “where everyone has to listen to me and no one is allowed to think.” Dream on, buddy.

As for me, I’m still dreaming … about meat. Yesterday morning I woke up in the middle of creating some sort of ground beef paprikash recipe. And last night I dreamed about packs of hamburger (I don’t remember the specifics). I’m reading about beef constantly (this book is excellent), and making notes for things we will do differently next time. Like, request they let the beef hang for three weeks instead of two, and make sure we get the oxtail.

The first thing I made with the meat was sloppy joes, four whole pounds of the stuff. It tasted fabulous, and I let the kids eat as much as they wanted.

The next night we had minute steaks. 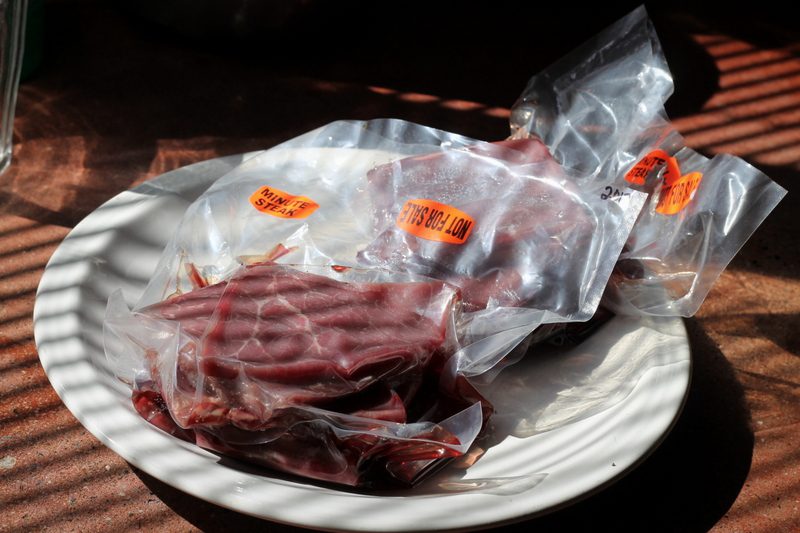 I wanted some super-thin strips of meat for carne asada, the grilled beef served from street corners all over Central America, but the butcher wasn’t familiar with it, so we settled on minute steaks, cut small. 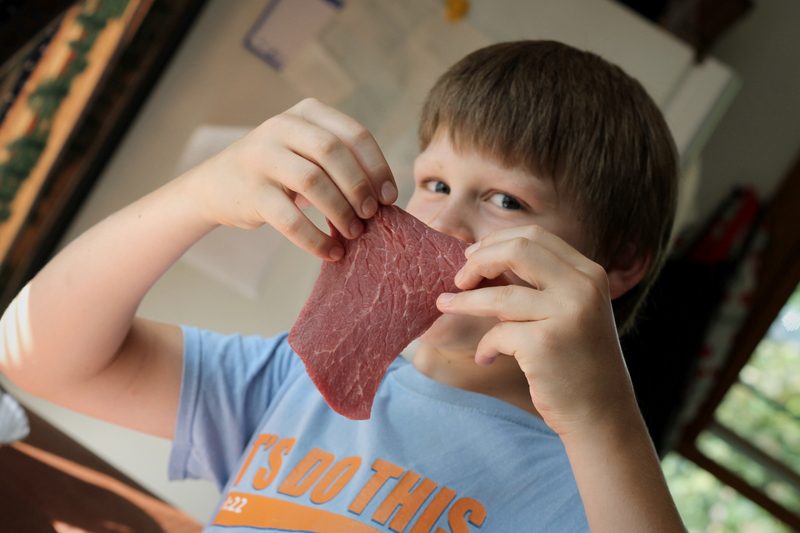 My younger son, for some unknown reason, became obsessed with this particular cut, so I tasked him with the job of researching how to prepare them. He then helped me pound them out (they were so tender, it was like rolling butter), dredge them in flour, and fry them up. 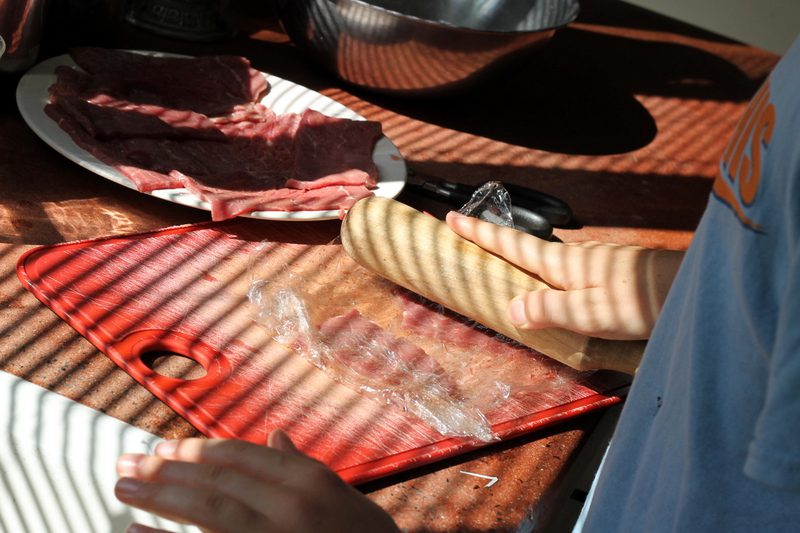 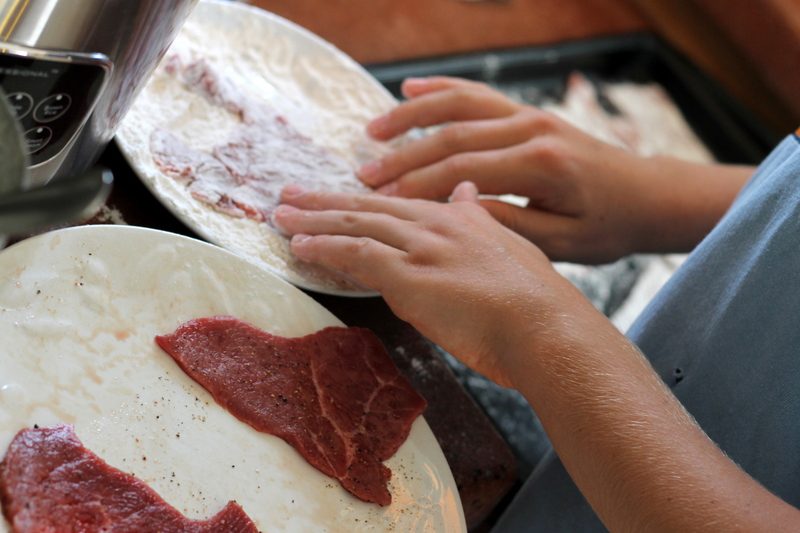 I made a pan gravy with the drippings, and we ate them with rice. Two whole packs, in one sitting.

Up next, steak sandwiches: flash-grilled minute steaks stuffed into crusty baguettes. Also, I’m eager to pan-fry a sirloin steak (or maybe a NY strip or a ribeye), and I can’t wait to grill up a bunch of thick, juicy burgers.

And to think, that’s barely the tip of the beef iceberg! It’s all so exciting I can barely contain myself! (Anyone who stops by our house can attest to this—they’ve all been forced to undergo a beef freezer tour.)

PS. For those interested in numbers: our steers weighed about 1100 pounds, and their hanging weights were 679 and 683 pounds.

PPS. Beef isn’t always what’s for supper. Last night we had chef salads and the night before was popcorn. Tonight we’re supping at our friends’ place. But my menu planning is definitely going to undergo a seismic overhaul. Beef everything, here we come!