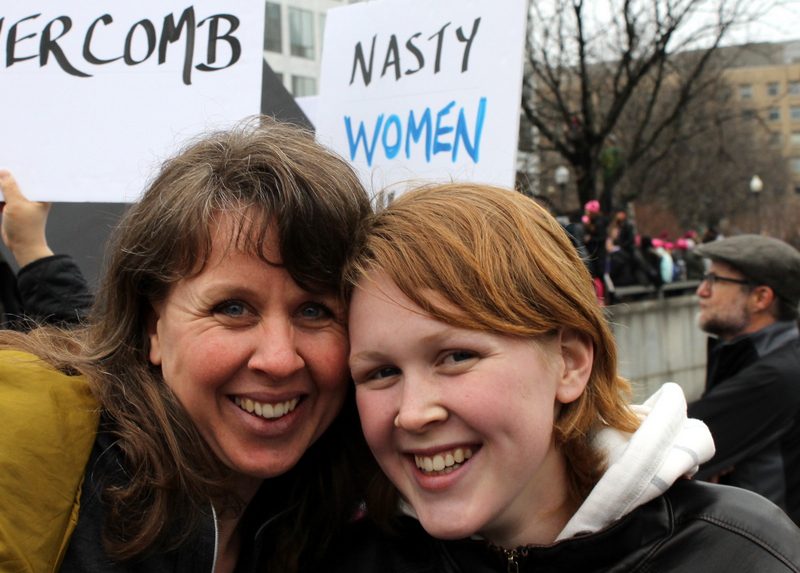 Never, ever, ever have I been around so many people. The sheer volume was staggering. From the moment we stepped away from the bus, we were surrounded. Even though I knew lots of friends attending the march, I didn’t see a familiar face—aside from those in our group of seven—the entire day.

When we left the stadium lot where the bus dropped us—two miles from the start of the march—the sidewalks were already full. We were immediately swept up in the ever-swelling stream of bodies that eventually, and rather suddenly, ground to a halt in a roiling sea of pink. 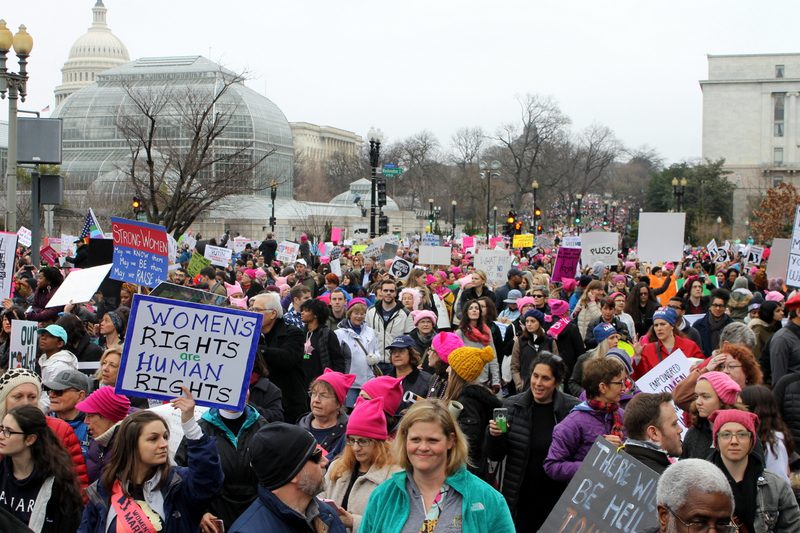 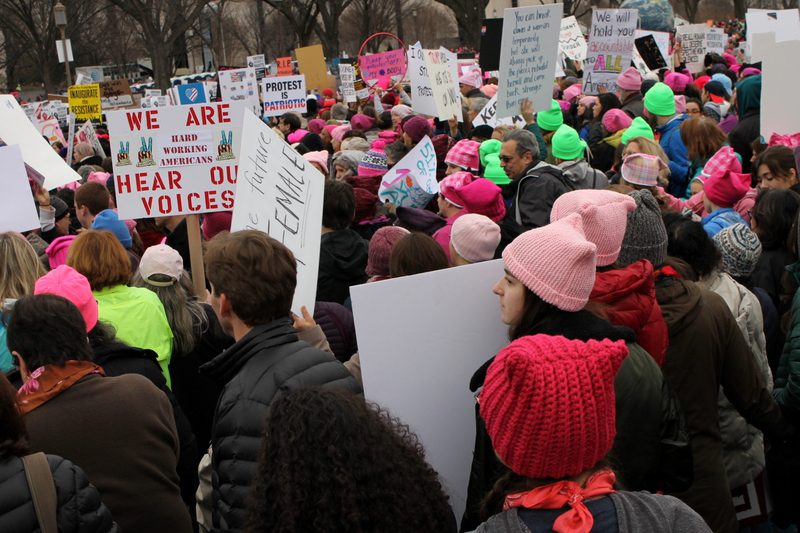 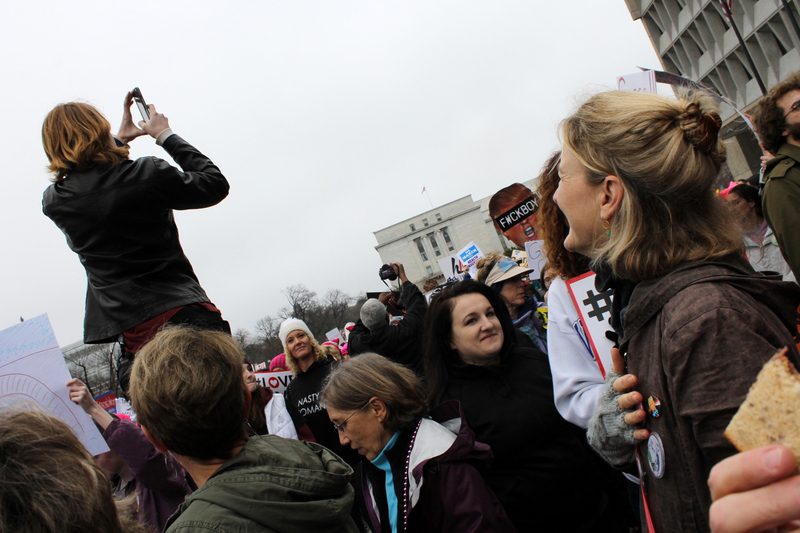 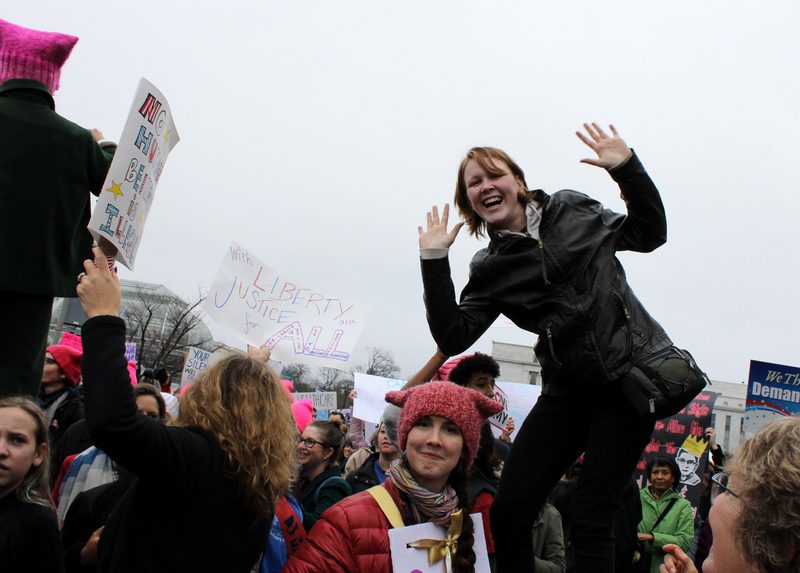 By the time we arrived, the rally had started. (We had made a bathroom stop which involved a loooong line.) Unfortunately, but not unsurprisingly, the crush of bodies carried us to a dead-end spot behind the stage. It took us a good long while to work our way around to the right side and then we couldn’t even get close enough to hear the speeches, let alone see anything. 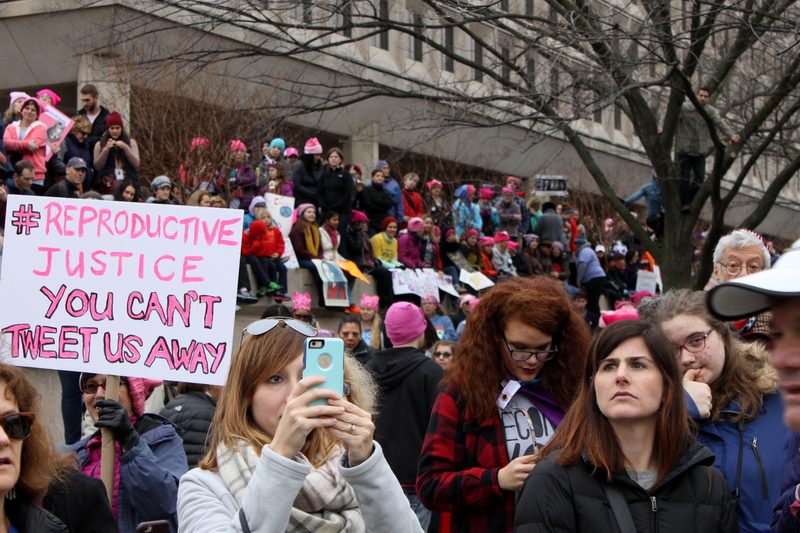 So we kept moving, inching our way down a parallel (and full) street, block after block, trying to find an entry point. Finally we found a spot where we could hear (but not see any of the big screens), and for the next couple hours we listened to speakers Michael Moore, Ashley Judd, Scarlett Johannson, Van Jones, 6-year-old Sophia Cruz, etc. 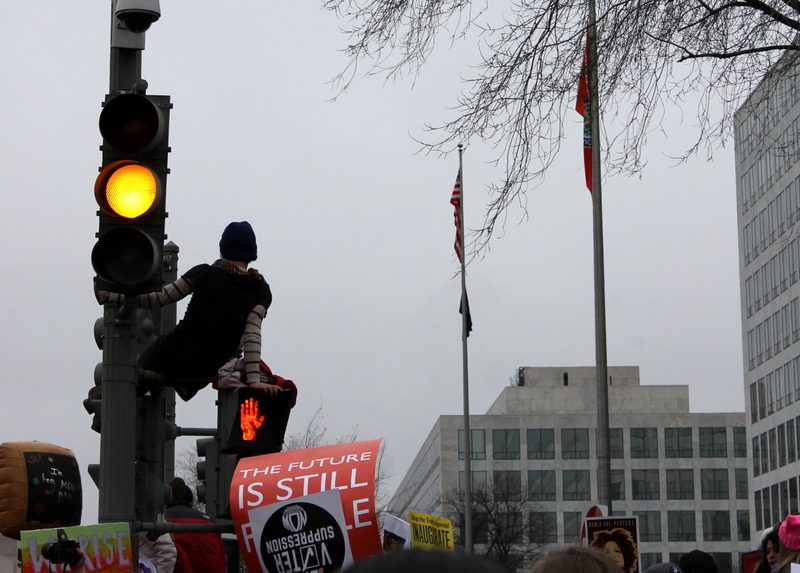 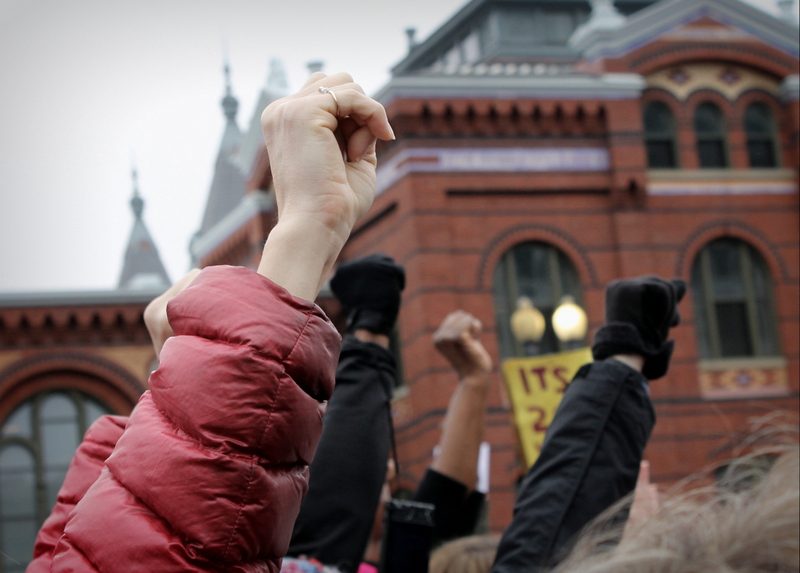 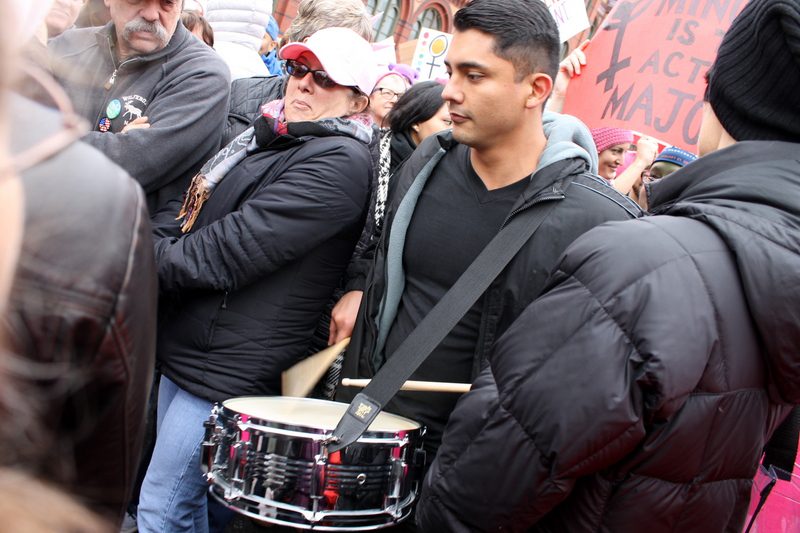 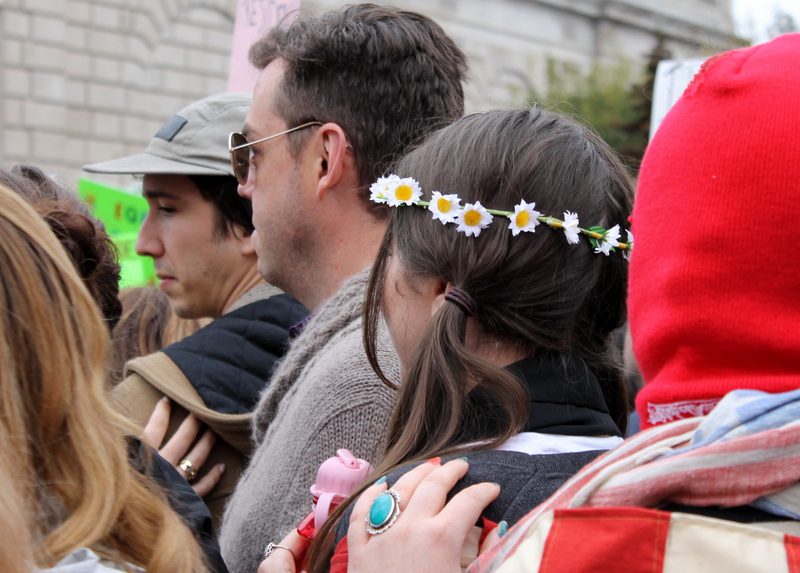 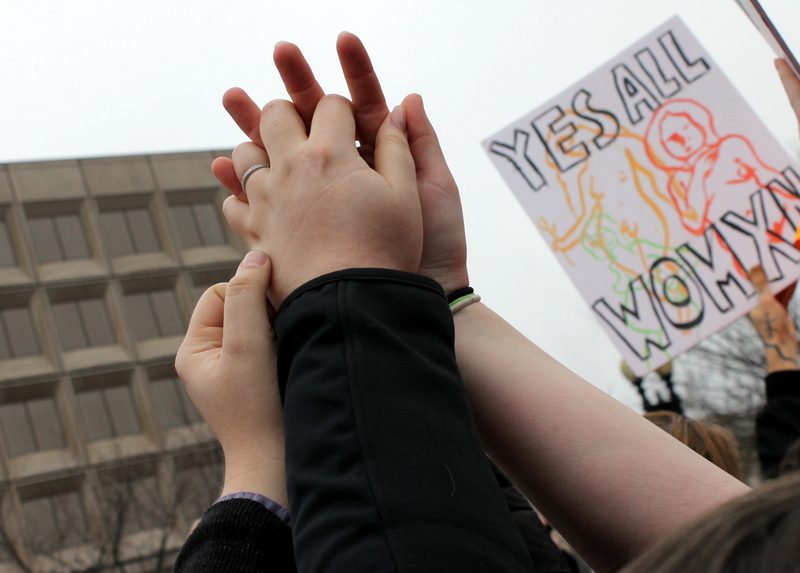 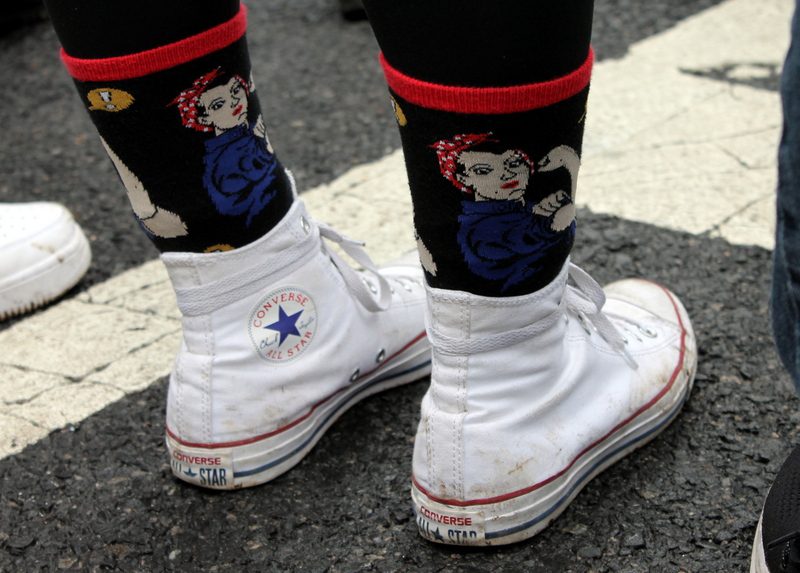 After the pain of standing became too much (standing still hurts), we started working our way through the crowd, trying to get to the place the march would be. Passing the big screens, we’d catch glimpses of speakers, Angela Davis, Madonna, Maxwell. 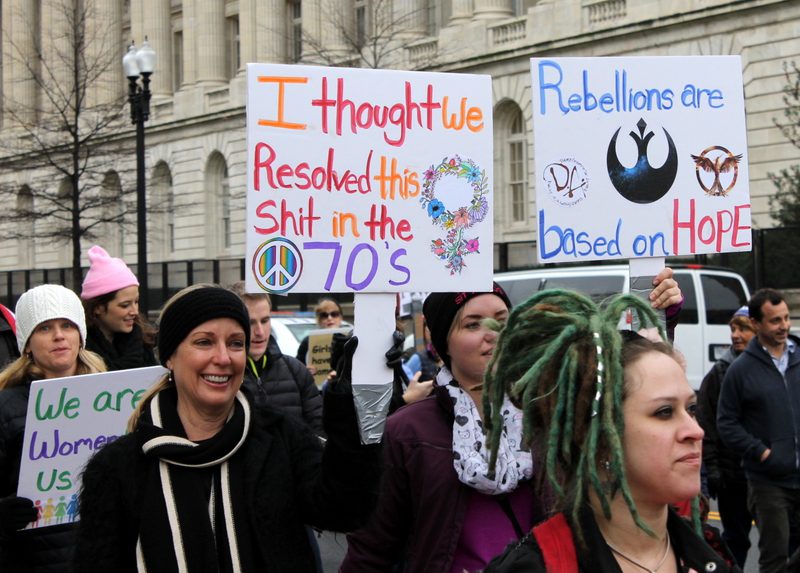 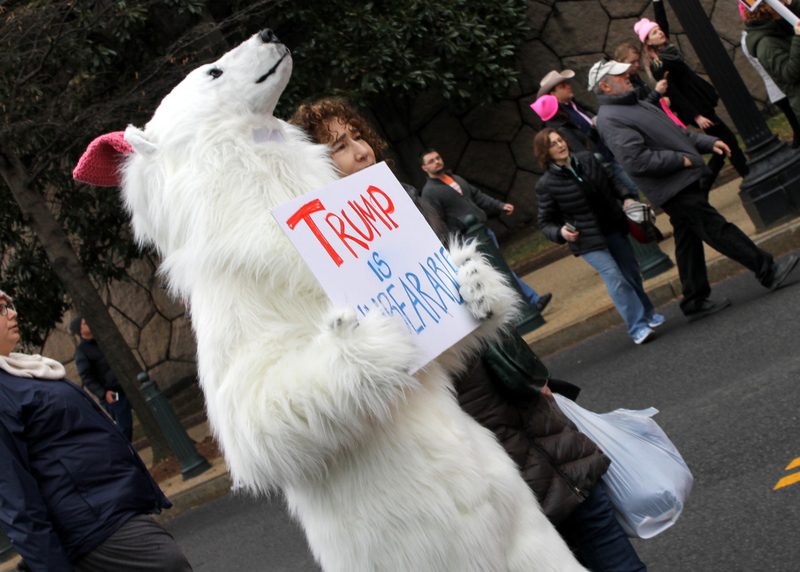 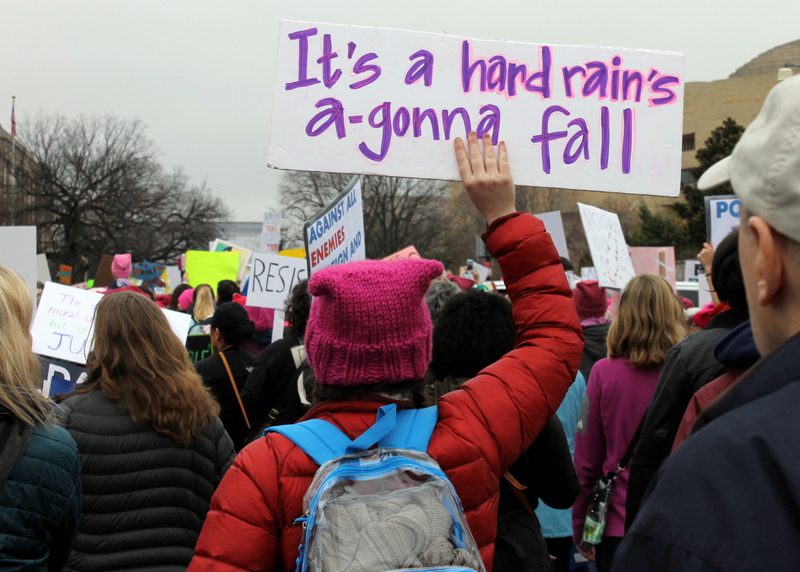 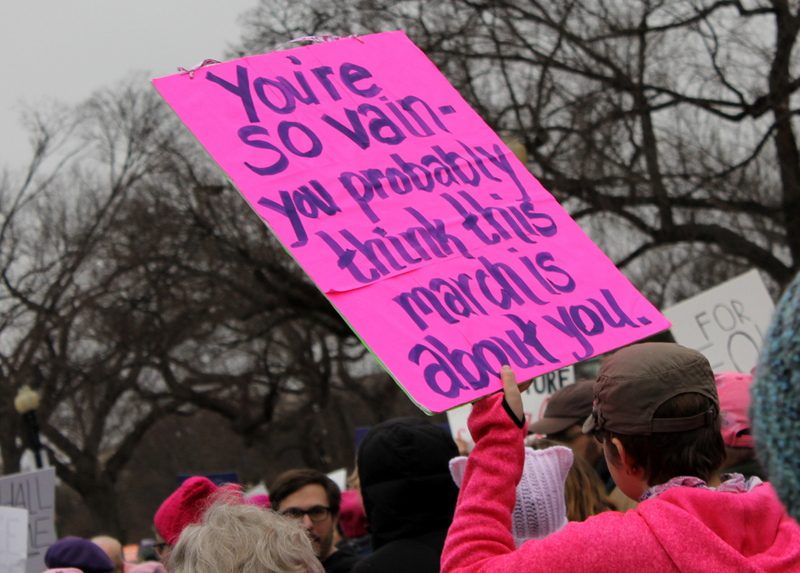 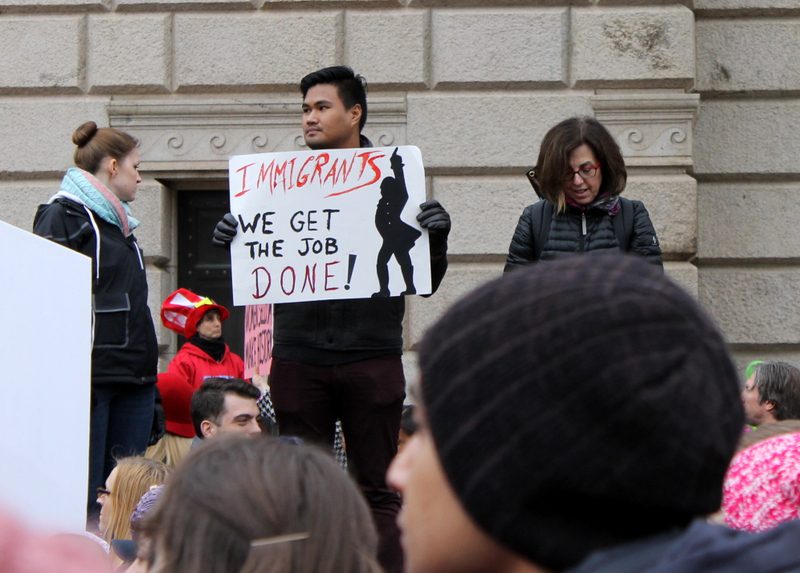 We shuffled along like a pack of emperor penguins, each person with her hand hooked into the hood of the woman in front of her. Sometimes the press was so great that we moved only a fraction of an inch with each step, and sometimes we couldn’t even take steps. I’d look around me, at the thousands of people hemming me in on all sides and do my best not to think about stampedes and mass shootings and trucks driving into crowds. My fretful husband had begged us to be safe. Don’t worry, hon, I’d told him. I’ll stay at the edge of the crowd. That I thought there’d be such a thing as an edge—ha! 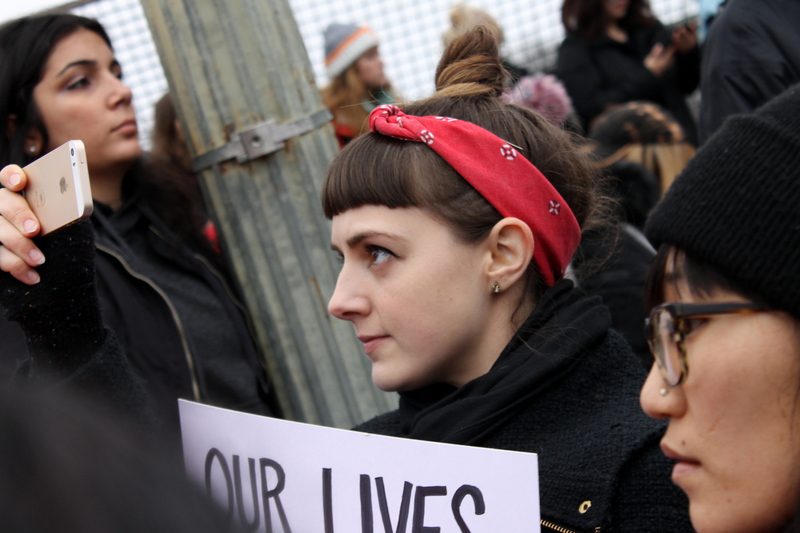 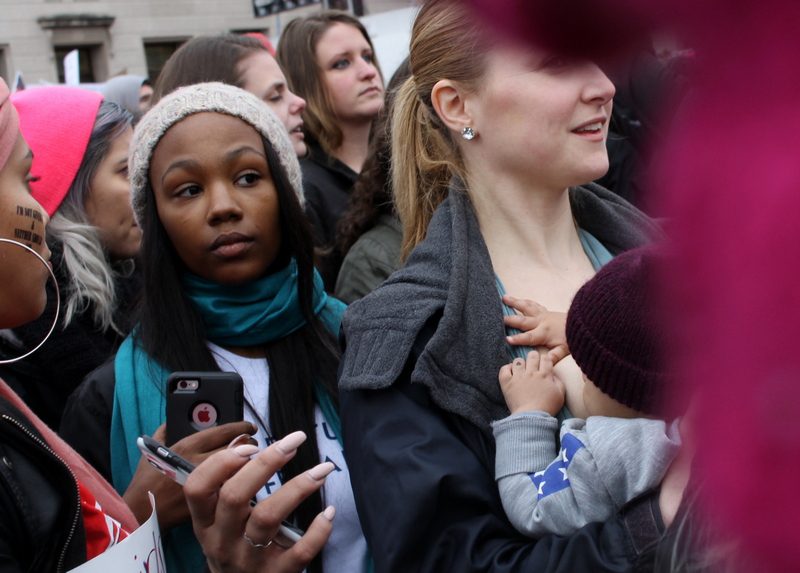 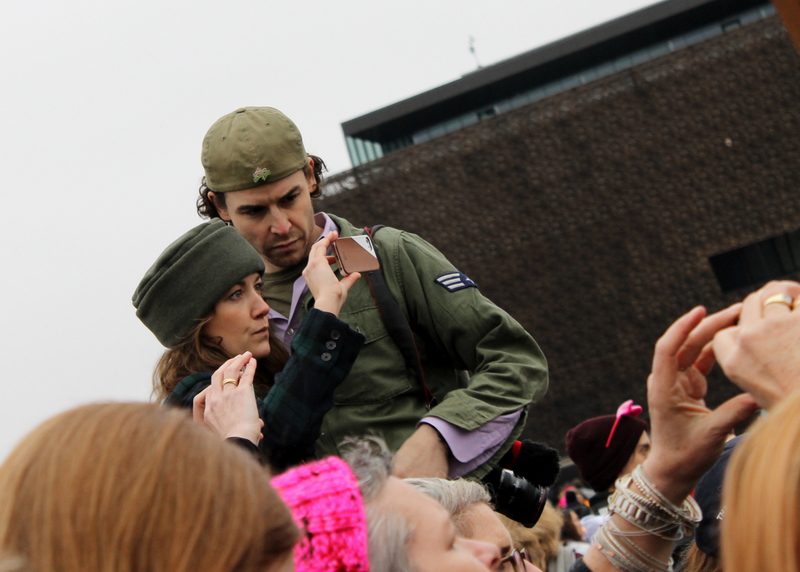 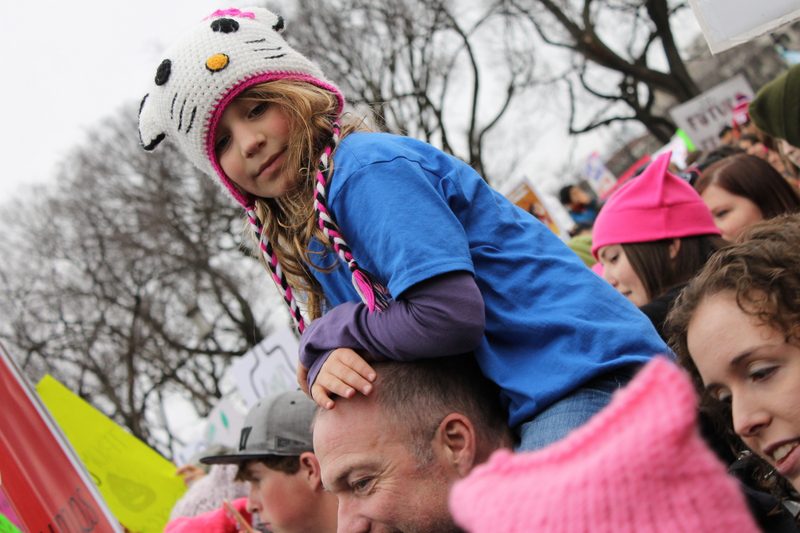 An hour and a half after the march was scheduled to start, it finally got underway. The few times the crowd thinned out enough that we could actually stride (because mostly we did the penguin shuffle), it felt so, so good. There were chants of all sorts, but my favorite was the random group yell. From several blocks away, we’d hear the roar begin. We’d wait, listening as it moved closer and closer, and then, as it washed over us, we’d throw back our heads and join in the collective, wordless howl of pent-up rage and hope, frustration and joy. Group therapy at its finest. 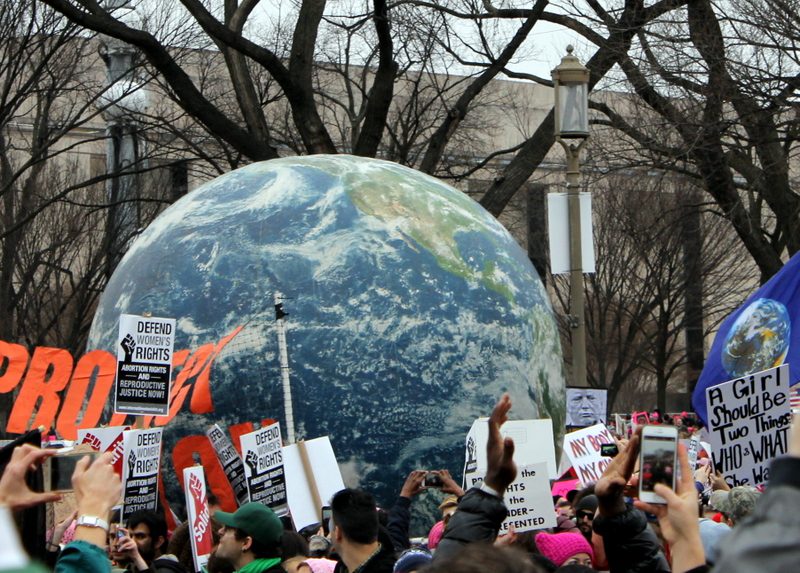 Things we saw:
*A hippie drum circle.
*Mountains of hay, for the police horses, running the length of a block. We only ever saw three horse, though.

*Almost no police.
*Signs, sign, and more signs. SO MUCH CREATIVITY.
*Random hell-and-damnation preachers with their black-and-white signs sporting words like “whoredom” surrounded by dancing protestors chanting “Love, love, love!”
*ZERO VIOLENCE.
*An enormous model of the world creeping down the street.
*People on stop-light posts, on walls, in trees, on ledges…
*(Few and far between) porta-potty cities. 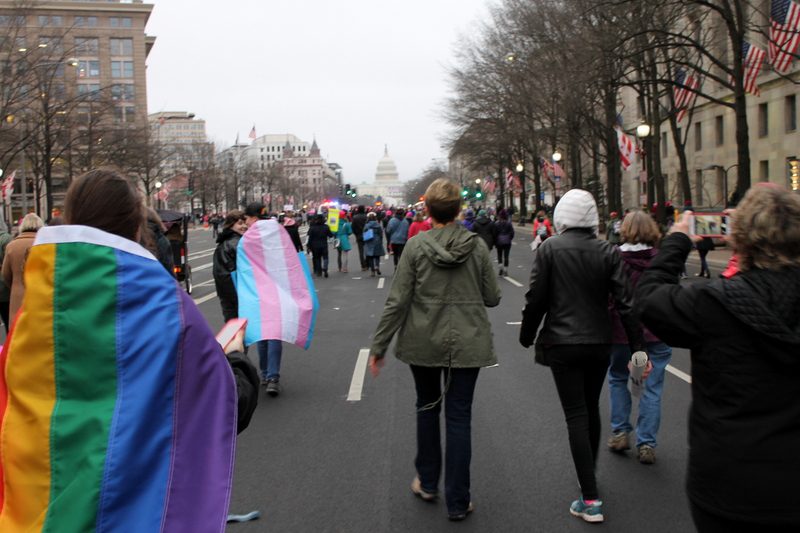 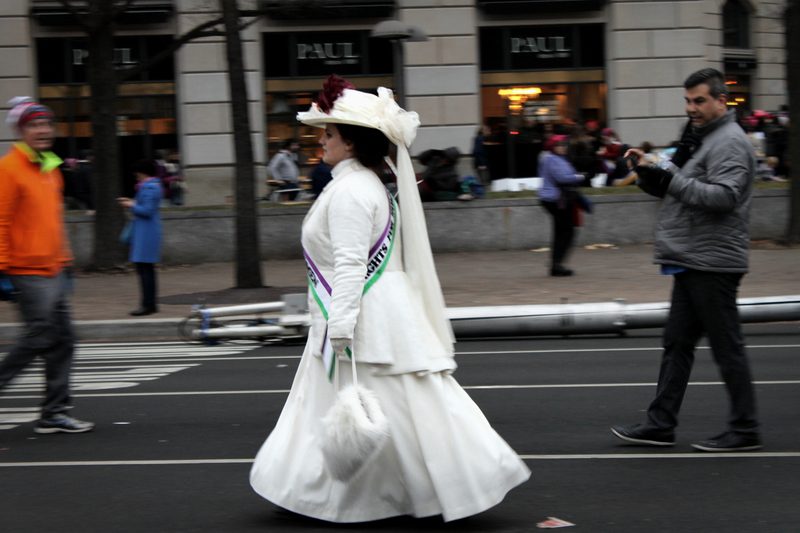 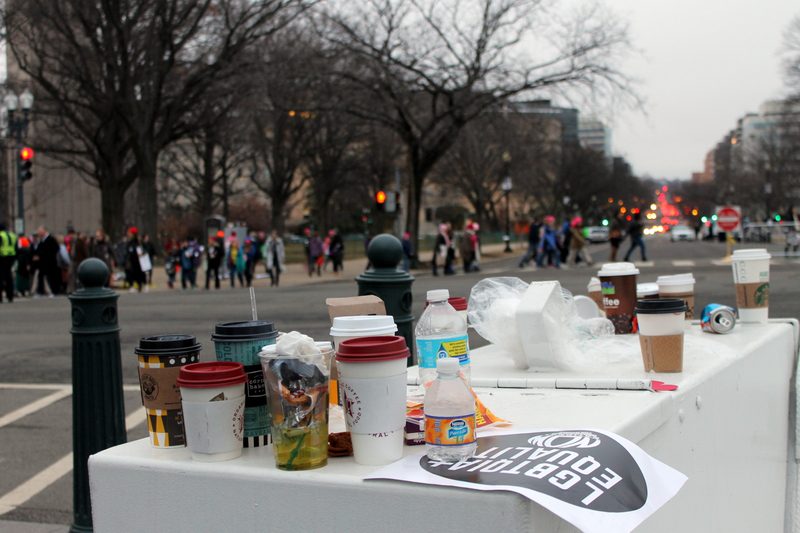 The march over, we started the long walk from the White House to our bus. Along the way we passed churches with their doors open, a woman standing outside her door with a pitcher of water ready to refill our bottles, a large sign on fence proclaiming in masking-tape letters THANK YOU. 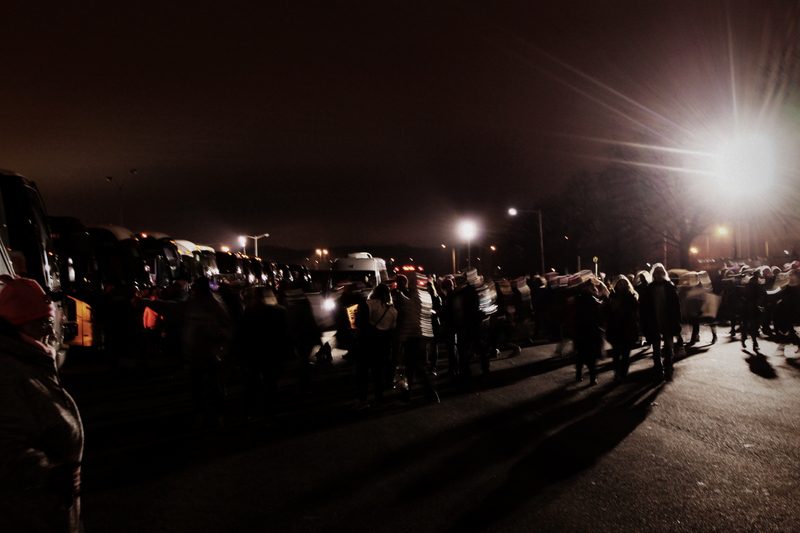 I arrived back at the bus dehydrated, hungry, and hurting all over. I inhaled my ham-and-mustard sandwich, carrots, figs and dates, cheese and crackers, and chocolate and then promptly fell sound asleep, waking only when the bus trundled into town.

At home—glorious home with TWO bathrooms and NO lines—I chugged water and chattered nonstop. My husband filled us in on the media reports (they said they had called off the march?!), and we skimmed through my hundreds of photos.

What a day. What an inspiring, entertaining, grueling, exhilarating, and profoundly moving day.

I am so glad I went.

This same time, years previous: lemon cream cake, and so it begins, the quotidian (1.19.15), the good and the bad, and multigrain bread.