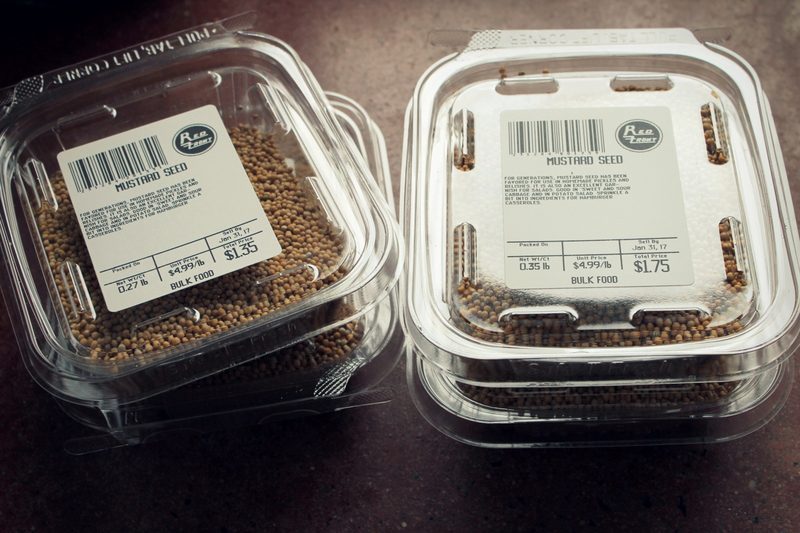 When one of my friends told me she made her own mustard, I was intrigued. While visiting her over Christmas, I spied a jar of the stuff on the counter. I took a big whiff: what vinegary, hot goodness! We ate that mustard at our meal, dolloped atop our breakfast ham, and once we were back home, I emailed her for the recipe.

When I finally got around to making the mustard myself, I misread the recipe. Instead of one cup seeds to three cups water, I did three cups seeds to three cups water. A couple hours later when I opened the fridge to show off my bowl of soaking seeds to my mother, I was surprised to see all the water had been absorbed, oops. I transferred everything to a gallon jar and added another six cups of water. It looked like I’d be making mustard for the masses! 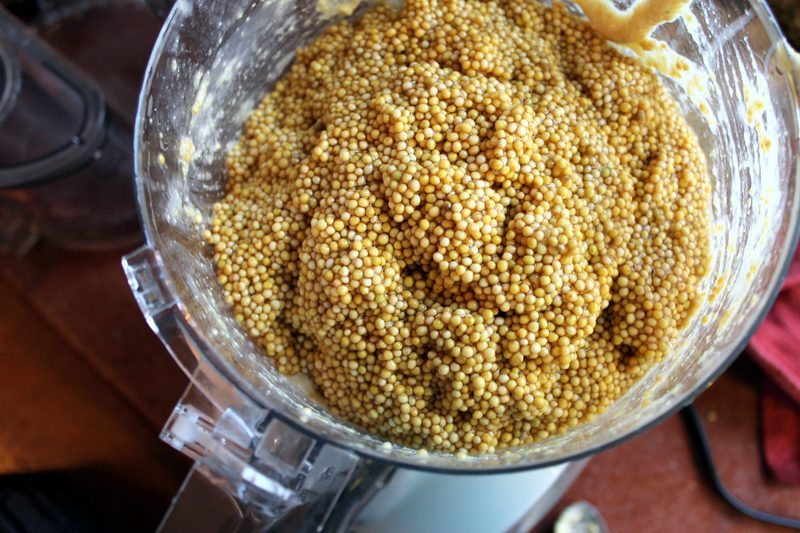 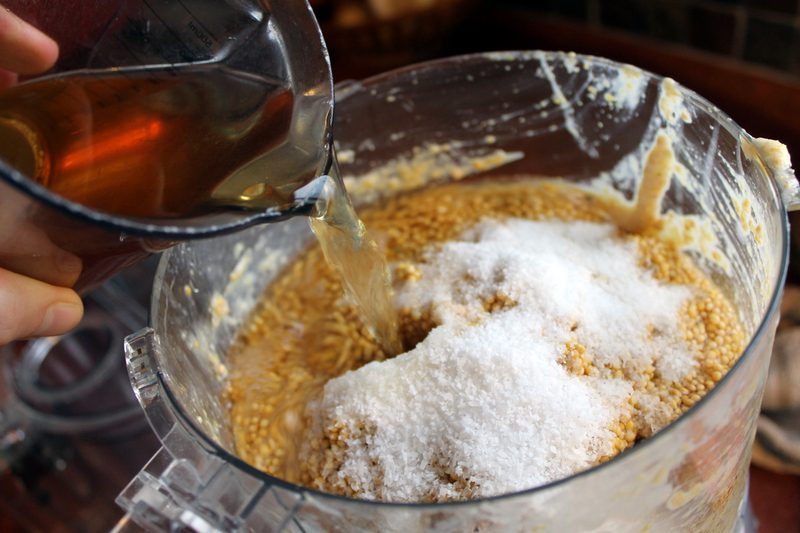 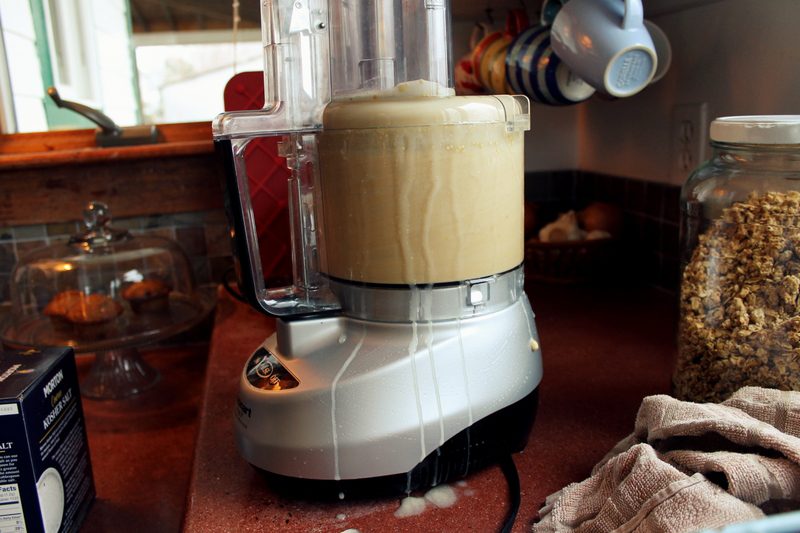 The next morning I drained the seeds and, working in batches, blended them in the food processor along with the vinegar and salt—MUSTARD! 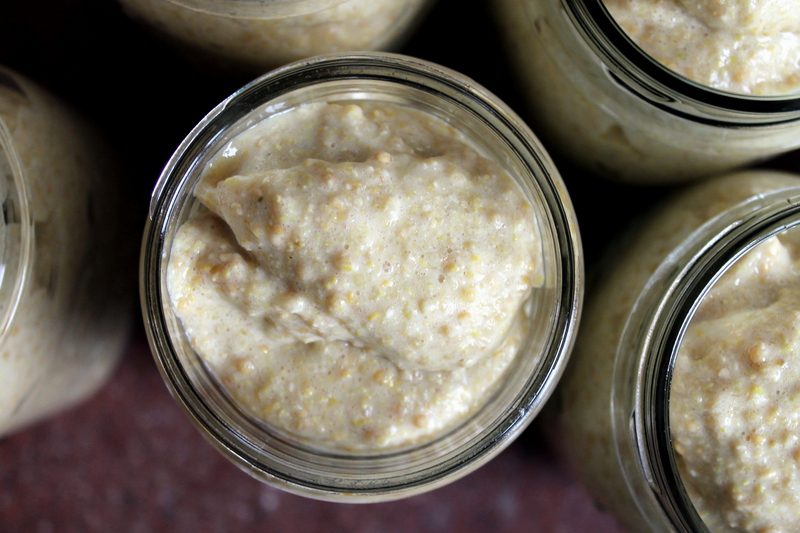 It’s grainy and hot, perfect in sandwiches with thick slices of ham, or as a dip for hard pretzels. I can’t wait to try it in honey-baked chicken, vinaigrettes, and potato salad. (I’ve been giving away pint jars of mustard right and left. I still have another pint or two to share. Anyone want some?) 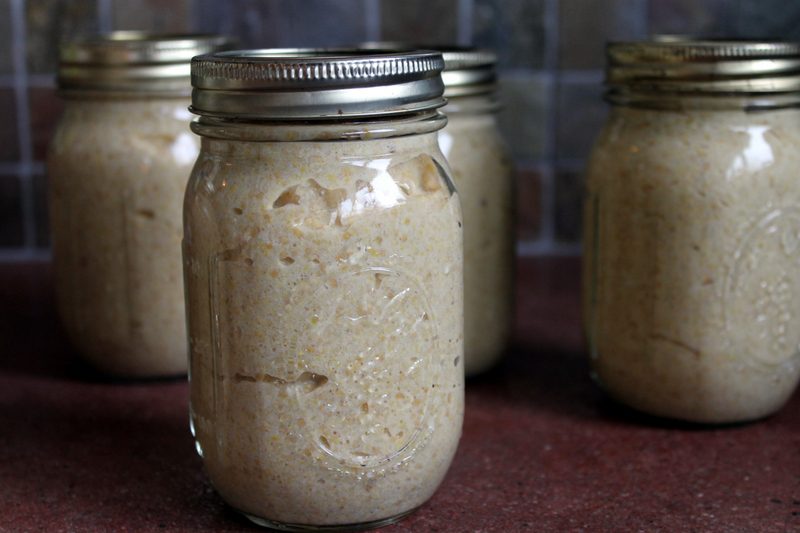 Homemade Grainy Mustard
As instructed by my friend Rebecca.

Rebecca says any vinegar will do; I used apple cider.

As I was writing up this recipe, I did a little research. Sounds like you can put just about anything in homemade mustard: white wine, beer, maple syrup, turmeric, white sugar, cayenne, horseradish. Also, I imagine you could, just for the heck of it, throw in brown mustard seed, or maybe some black mustard. Fun, fun!

In the evening, put the seeds in a bowl, cover with water, and soak overnight. My friend leaves them out on the counter, but she said that one hot summer “the seeds sprouted and produced a hotter-than-hell mustard with odd horseradish overtones.” I put mine in the fridge, just to be on the safe side.

In the morning, drain the seeds. They will be slightly slimy and stinky. Put the seeds in the food processor, add the vinegar and salt, and start blending. At first the mixture will be runny, but keep whirling. After a minute or so, it will thicken up nicely. Transfer the mustard to a quart jar and store in the fridge.