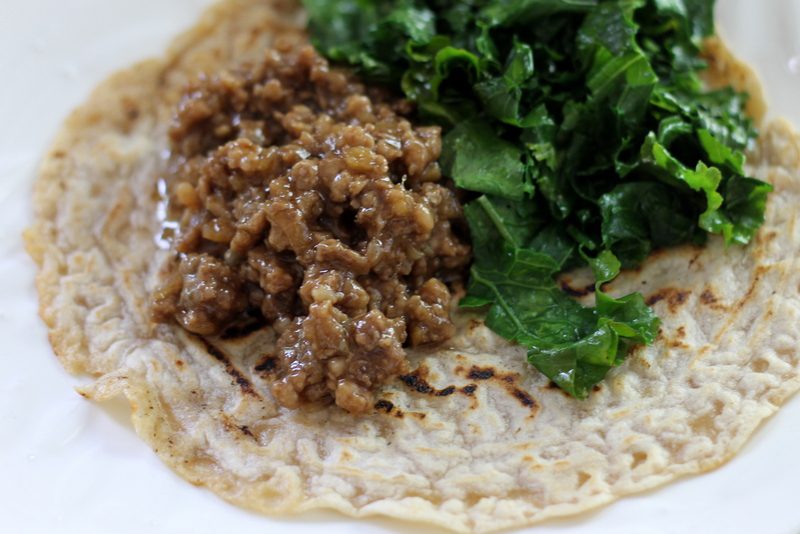 These days, I’ve been hankering after Ethiopian food. Which might seem a little odd, considering how hot it’s been. For the past week, it’s felt like someone has tossed a thick comforter over our stratosphere and is slowly squeezing it ever tighter and tighter. Doing anything physical feels almost insurmountable. One morning I slept in, so the sun was already up when I went running: I about died. Ever since then, I’ve made sure my husband and I leave for our runs while it’s still dark so we’re done with our self-inflicted torture before the sun crests the ridge. Because as soon as that wicked hot sun shoots a single solitary ray in my general direction, I’m good for absolutely nothing, huh.

Then again, maybe it makes perfect sense, this craving for Ethiopian food? Ethiopia is hot, or so I hear, and flatbread with simmered greens and chunks of spicy meat might be just the sustenance a person needs to make it through the sweltering days.

Actually, I kind of suspect my Ethiopian food lustings are a result of the book I’m reading: the memoirs of a Somali woman who spent her childhood moving between Somalia, Kenya, Saudi Arabia, and Ethiopia. (I keep mentioning this book, and really, it’s totally fascinating. I don’t usually read books by non-American/European writers and am finding the diversity to be delightfully refreshing and thought-provoking. I might make Infidel required reading for the older two kids. It’s that good.) The author is not a foodie writer—not at all—but even so, I find her countries’ exotic flavors and spices have permeated my thoughts. Fresh ginger, garlic and onions, turmeric, cinnamon, cumin, oh, yum….


My Ethiopian kick has one other influence, too: a failed tortilla recipe. I came upon a recipe for no-roll sourdough tortillas and had to give it a try. The resulting tortillas were most definitely not tortillas. Soft and spongy, they were more like savory crepes or— Oh, hey, Injera!

We ate our most-definitely-not-tortillas with chili over rice. The flavor combo—sourdough with Mexican—wasn’t that compatible, but the kids didn’t seem to mind (though my younger son kept asking for syrup; the bread’s association to his beloved Farmer Boy pancakes was too great).

But then I ate the leftover not-tortillas with greens and Korean beef and totally swooned.

My husband had some, too, and was like, “Now that is good.”

For lunch one day, I had a leftover not-tortilla with more greens, scrambled egg, and a little pile of feta. 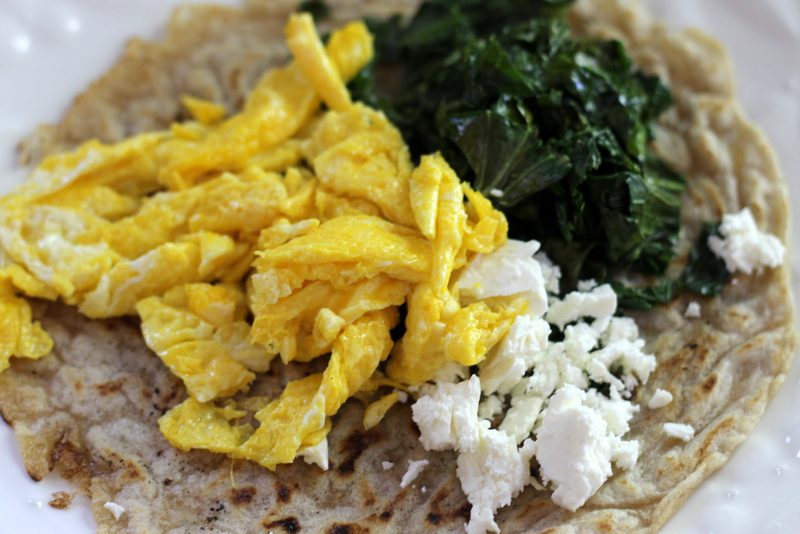 And then I discovered some teff flour in the freezer and mixed up another batch of batter: a little leftover sourdough starter (maybe a quarter cup or so), plus flour (both wheat and teff) and water. The batter sat at room temp all day and then, right before cooking, I whisked in a little salt. 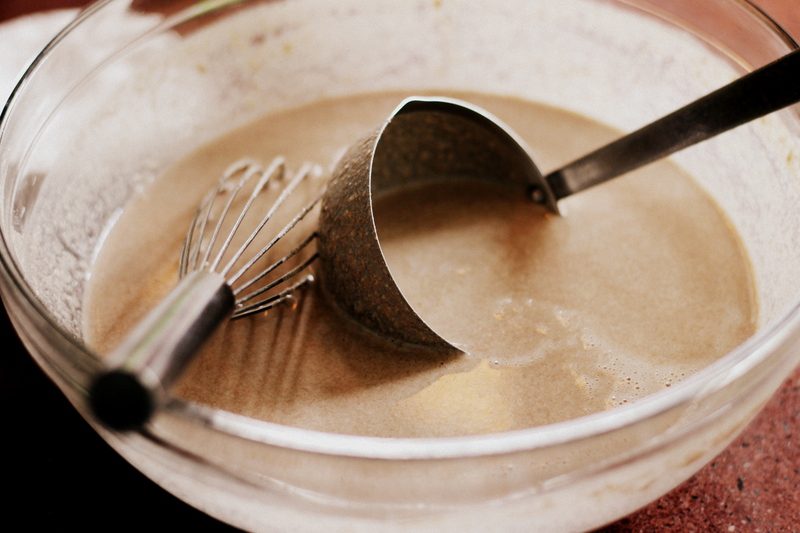 The Injera—because I can call it that now that I’m using teff, I think—is cooked like a basic crepe: just a little batter in a non-stick, or lightly-buttered, pan, cooked like a pancake. 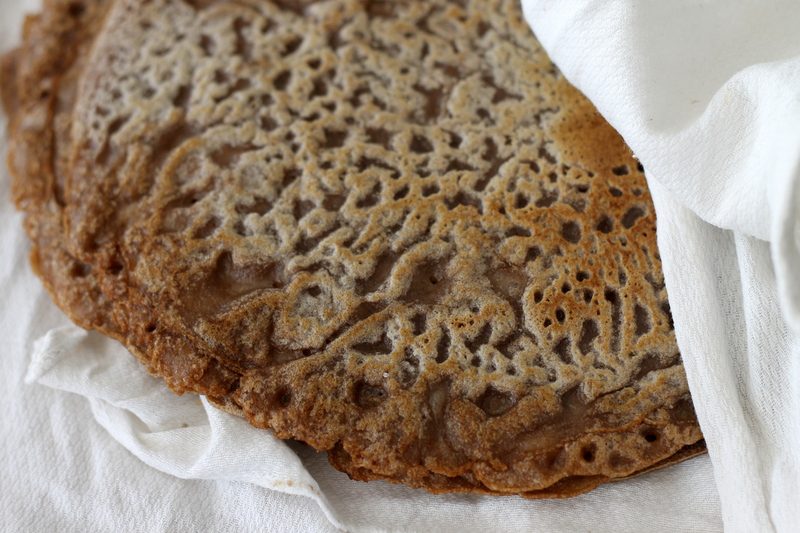 I have no idea if the resulting Injera is authentic or not—do they even use sourdough starter in Ethiopia?—but you know what? I don’t even care! The texture is lovely—soft and slightly spongy—and the tangy flavor is a great counterpoint to all things ginger-cumin-paprika-cayenne-curry. 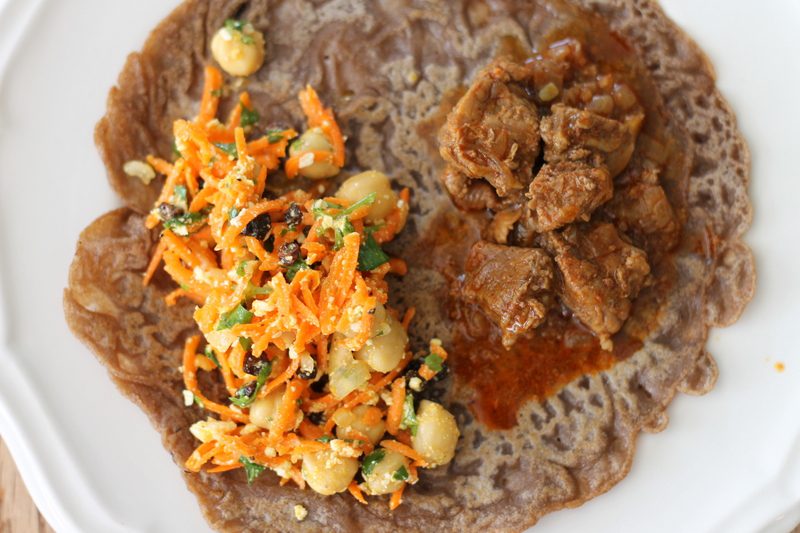 That night, we ate the Injera with beef wat (though I used pork instead) and Morrocan carrot salad. Everyone (but one child and I’m not counting her) approved. And then the next day, my son’s friend—on home-leave from Kenya, and whose family will soon be moving to Ethiopia!—showed up and ate all the leftovers. 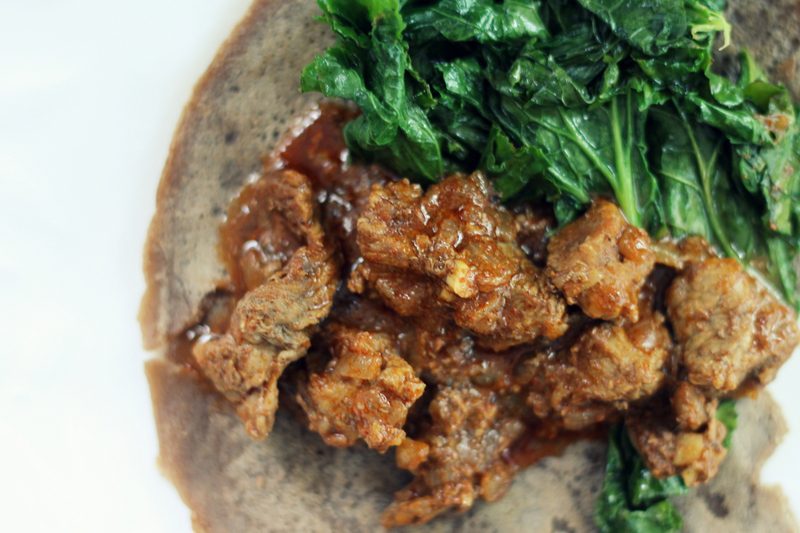 I did a little research after writing this post and it appears that real Injera is made from all teff flour (generally the dark teff, not the light), with a little millet or barley flour thrown in. They let the flour and water (and sometimes a little yeast) sit at room temperature for a couple days which creates a starter and a slightly sour flavor. (So my sourdough starter might be spot-on after all!) The batter is not flipped in the pan (I used a basic cast iron skillet). Instead, after the bubbles form, the pan is covered with a lid until the Injera is cooked all the way through. I’ll be trying that next time.

Feel free to play around with flours. You can use half teff and half whole wheat (or all whole wheat, but then it’s definitely not Injera), or teff with millet or barley flour, or whatever.

Stir together the flours with the starter and water. Cover and set at room temperature for 8-12 hours. Whisk in the salt. Cook as you would a crepe, buttering the pan each time before adding more batter.

Serve the Injera (makes 8-12 Injera, depending on the size of your pan) with spicy meat, lentils, vegetables (or whatever) piled on top. Eat with your fingers, tearing off bits of the Injera and using it to scoop up the meat and veggies.

I reduced the called-for three tablespoons (!!!) of cayenne to one-half teaspoon and it was still plenty hot. Also, I used real ginger along with the ground ginger, added a bunch of smoked paprika to make up for the reduced amount of cayenne, and added water to make it saucy.

I cooked the wat on the stove top, but when it’s not so hot outside, it might be nice to start it on the stove in a Dutch oven and then clap on a lid and finish it off low and slow in the oven, or in a crock pot.

In a large stew pot, saute the onions, garlic, and ginger in the olive oil and butter until translucent but not browned. Add the cayenne, paprika, peppers, ginger, cloves, and cinnamon and simmer for a couple minutes. Add the meat and salt and saute for 5-10 minutes. Add the water, lid the pan, and cook on low heat for another 30 minutes, stirring occasionally. Serve with Injera or over rice.

This same time, years previous: the quotidian (7.28.14), rest and play, the girl and her friend, the boy and the bike ride, a quick pop-in, Indian pilaf of rice and split peas, and chocolate beet cake.