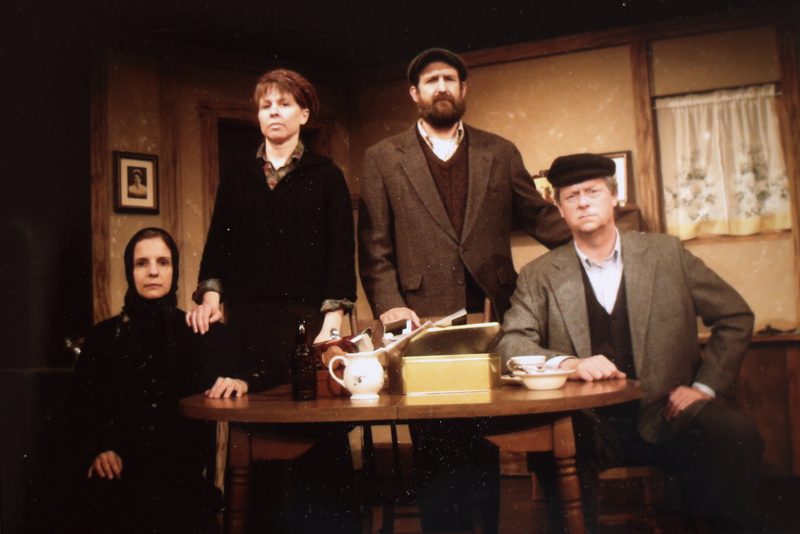 Read the script a year in advance, fall in love with the story, and write the audition dates on the calendar. The one role you’d be suited for is a main one, so you’re pretty sure there’s no chance you’ll get it. Try to forget about the whole thing.

The night before the audition, remind your husband that the role you’re auditioning for involves kissing. When he says, “What? No way!” say, “Seriously, honey? Kissing is part of acting. You gotta be okay with it,” and then, when he slumps back in his chair and sighs, “Oh, all right. Do whatever you want,” smile approvingly.

Audition, get the role, and freak the hell out. The terror is gut-wrenching; the elation sky-high. You feel as though you’re going on stage tomorrow but without any of the preparation and tools. Panic, stress, and worry as though it’s your full-time job. Thank heavens your husband finds your emotional seizures fairly hilarious and that he makes sure the kids give you plenty of space.

Start rehearsals. Marvel that such a motley group of people dares to attempt to make art together. How in the world can everything possibly come together in just four short weeks?

Memorize lines like a demon and be off-book in two weeks. Going off-book is like weaning a toddler from naps. You gotta do it but you know everything is bound to fall apart. Which it does, but then, eventually, things start falling apart just a little less…

At first, running whole scenes feels like riding a wave. You know nothing about surfing, but that’s what you keep thinking of. Once the scene starts, it just goes—lines keep getting thrown at you and you’re scrambling to stay upright, to ride the wave through all the way to the end. The entire time, you have no idea where in the script you are, or which direction is up, but you keep going because the lines keep coming. Then suddenly the ride is over, and you’re still standing, out-of-breath and slightly dazed. You made it!

Being scrutinized so thoroughly makes you feel exposed and vulnerable. Everything about you is up for grabs: how you talk (Don’t worry about speaking with an Irish dialect; you need to learn to speak standard English first), how you move, how you think, process, interpret, everything. The intensity makes you cold, literally, but you also sort of love it because you are needed—every piece of you is needed—completely. The satisfaction that comes from this sort of whole-body work is exhilarating, and utterly exhausting.

Be eternally grateful that the director is rabid about no one else giving direction but him. That he’s the only one to offer criticism makes you feel safe and allows you to risk more.

Have awkward discussions with the guy you’re imagining to love about things you never say to men. Learn to cross lines you’ve trained yourself to never cross. The whole love-acting thing is bizarre, and yet, weirdly enough, not bizarre. Now you finally understand how it is that actors do these things.

And yet, it’s still hard. Feel relieved when another actress points out, after running the love scene yet again and in front of a row of people in broad daylight, that these scenes will be easier on stage when the audience is blacked out and there is more physical distance between you and the audience.

While in rehearsals for the play, also participate in a couple small sketches for your church. Get so nervous for these little sketches that you feel physically ill. If your nerves get that frayed for a small sketch, what kind of a wreck will you be when it comes time to run a full-length show? Why in the world do put yourself through such anxiety? Seriously question your sanity.

Be so consumed with nerves and anxiety that you forget to eat, hardly sleep, no longer cook, and ignore the children. Go running on a regular basis, and for longer times, because you have to find a way to burn off all that nervous energy.

Ask for extra rehearsals and meet with the other actor to go over lines on your own time. Be glad that you’re both equally invested in wanting to get it right. (Though the director has made it clear: there is no “right,” just less wrong.) Do homework for the role: meet with a man from Ireland (and his Irish-dialect savvy wife) for dialect training. Watch movies for the Irish dialect (Into the West, Waking Ned Devine, The Commitments, The Secret of Roan Inish, In The Name of the Father, My Left Foot, Circle of Friends), and watch Swan Lake for context. Listen to Irish radio. Try to lose your Pennsylvania accent by studying standard American English. Do vocal warm-ups. Try not to yell at the kids. Stop reading bedtime stories out loud to save your voice.

Buy real cigarettes, (sort of) learn to use an e-cigarette, and watch smoking videos (with your kids, no less, and on a Sunday, because you’re not being the best parent these days). Learn (kind of) to pack and smoke a pipe. And then be relieved when the director decides, the night before the show, to strike any real smoking from your role. Simple pipe holding and fake cigarettes are much simpler than the real deal.

Two days before opening, fall completely apart. Send an email to your friend that reads: “My nerves are shot. I can’t focus. I’m anxious and stressed. My heart feels like it’s racing—it’s like I just drank 10 cups of coffee and haven’t slept in 24 hours. I have GOT to get myself out of this state, but I don’t know how.”

About that not-sleeping thing. It’s a real problem. For weeks you don’t get more than five hours a night. Naps are out of the question. You try everything: wine, beer, Tylenol PM, Ibuprofen, melatonin, Robitussin, Benadryl, eliminating sugar, running. During the day you take Ibuprofen for exhaustion headaches (as well as Vitamin C to fend off potential colds and Lysine to fight stress-induced fever blisters, cough drops and throat lozenges to de-irritate the throat, and plenty of fluids). Eventually, you simply get used to not sleeping. You’ll catch up (or crash) when the play is over.

After opening night, luxuriate in the bone-deep relief. You did not blank, skip entire pages, shatter the bottle of beer, or fall off the stage. Now, instead of not sleeping for running lines out of anxiety, don’t sleep for running lines out of enjoyment. And what great lines they are! When else in life do you get to say, “Because men are beasts and need height to balance the truth and goodness of women,” or “Have you ever wondered what I wore when I wore less?” or “You know I’m a woman and women have parts that are swollen up and exaggerated to attract the man…” or “Well then why, in the name of Cinderella’s shoe, would you try to give me away to a cousin you barely know? … Foisting a stranger on me? Are you a pimp?” and “Half the world is lonely and you wouldn’t knock on my door about that,” and “But you’d bring him here to look me over. Like I was a red heifer,” and “Now don’t make me reach out from behind the door the shotgun. Because I will.”

On days when there will be a show, starting at four in the afternoon, flood your system with water, eat a small bowl of granola, and pump yourself up with Treat Her Right (impossible to listen to without dancing). Shower, do make-up, and dress. While driving to the theater, do warm-ups and hope the weird faces you’re making don’t cause other drivers to crash.

Be surprised with how un-nervous you are at the start of each show. You feel jangled, sure, but getting out there is so much fun, and the audiences are so friendly, that you can’t get too worked up. It’s a different story for the second act, however. The last 35 minutes are just you and the other guy. Once you step out there, there is no stopping; it’s just the two of you going head-to-head and there is no room for slipping. So every night at the end of intermission, your stomach plummets. Breathe.

By the end of each show, you are so sweaty your hair curls and your brain is so fried that you can’t remember people’s names or speak coherently. Unwind by listening to classical music on the drive home and then talking your husband’s ear off for a good forty-five minutes. Go to bed by 11:00 and fall asleep by 1:00.

As much as you delight in the lights, the audience’s energy, and the accolades, you gradually become aware that none of these things brings you real satisfaction. The applause lasts a couple minutes, the glow from a compliment just a couple hours. Realize that any “success” is as dangerous as any “failure.” You are still you, and how you feel about what you are doing is the heart of the matter. Your core motivators—to learn, grow, create, have fun—must be stronger than everything else. You feed yourself, not anyone else.

With every fiber of your being, dread post-play letdown, so make believe it’s not happening. When your son breaks his neck and back mere minutes after your final bow, realize that for a little while, at least, you’ll have something bigger to distract you from your misery. When you finally do come home and feel the loss of the play, the grief is not nearly as intense since you’ve had the distance of time. Still, you’re sad. And slightly irrational, too: you’re forty, that was probably the last fun acting part you’ll ever have, your life is over, you might as well go ahead and die now. All you have to look forward to is planting the lettuce and that holds zero thrills. Try to pretend you’re not desperate, but then write about it on your blog anyway. 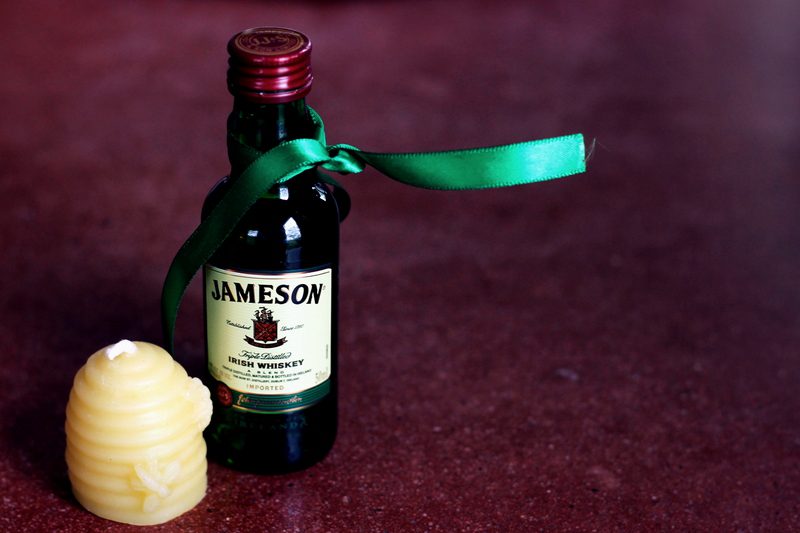 Irish Whiskey and a bee candle: fitting parting gifts from another actor.