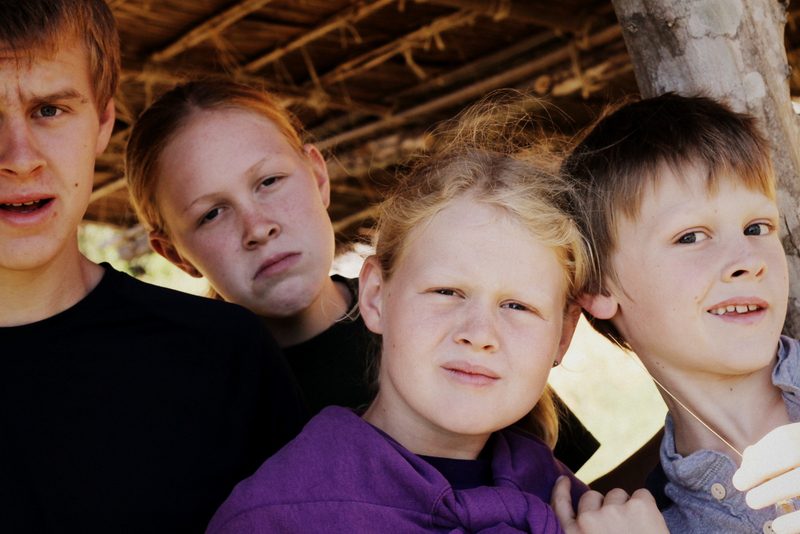 Oh, I knew about The Frontier Culture Museum all right. I have friends who say they go there “all the time.” Some of them even send their kids there for camp, or have older kids who volunteer there during the summer. And it’s not like the place is far away. No, no, it’s exactly 45 minutes from our doorway to their parking lot. And it’s cheap, comparatively speaking. When we purchased our tickets, the cashier rang us up and then said, “You do realize that if you pay five dollars more, you can get a family membership for the whole year?”

I thought it over. “You mean we can come back tomorrow and the next day and the next day? For a whole year?” Which was kinda rhetorical, but I wanted to make sure before I smacked down the forty-five bucks, which I did almost before she got done saying, Yes, my dear. That is exactly what I mean.

And all this before I had even seen the place. Basic math is quite compelling. 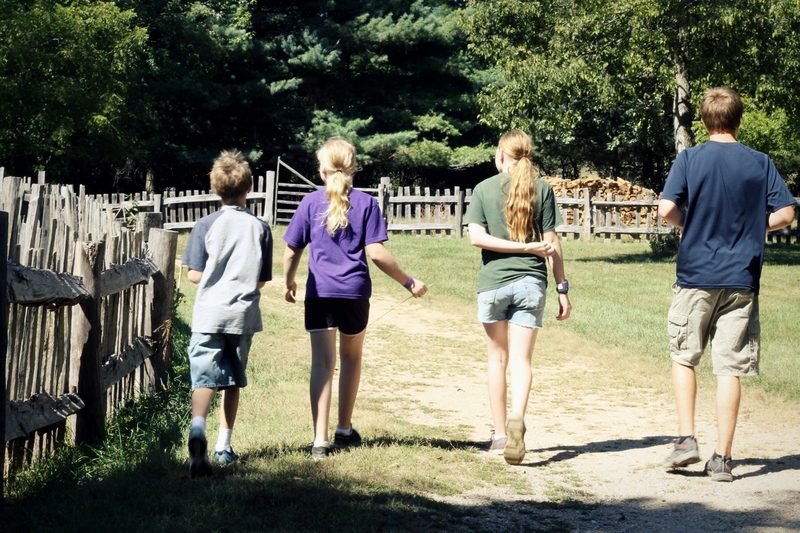 We had perfect weather and the entire place to ourselves, or so it seemed. I read somewhere recently that the best time to go to museums is right after school starts back in session: the summer crowds are gone and the teachers haven’t gotten around to organizing field trips yet. There were only a few other couples wondering about, and at the very end of the day I saw a mom and two kids. That was it. It felt like there were more volunteers working the place then there were visitors. 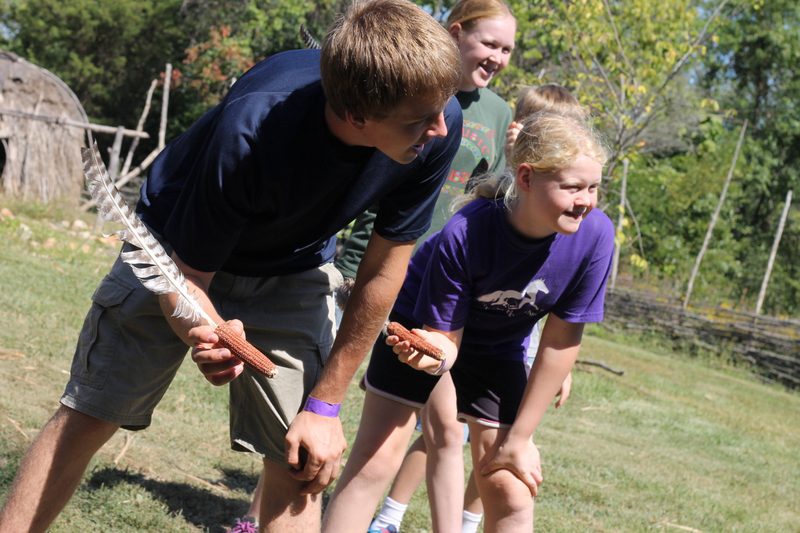 The website suggests that visitors allow three to four hours to explore. We spent six, and we were rushing things. The grounds are divided into the Old World (Ireland, England, Germany, West Africa, etc) and the New World (American Indian, the 1740s, 1820s, a schoolhouse, etc). The volunteers work on location. So, for example, when we happened upon the American Indian village, the volunteer was working on making reed mats for the wigwam’s roof. When pushed for details, he said that it takes about an hour to cut the reeds, since he has to go find and harvest them himself, and then about half a day to make one mat. And all this while using only period-appropriate tools. 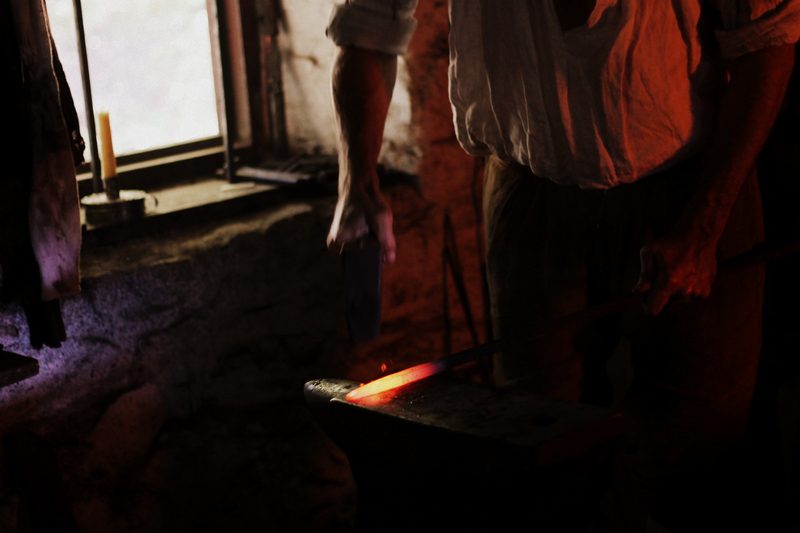 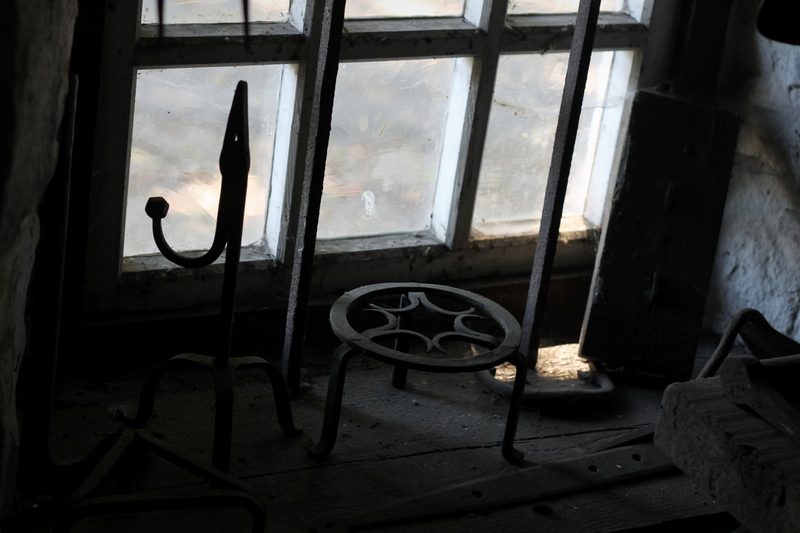 When we arrived at the Old English house, not a volunteer was in sight so of course the kids immediately swarmed the place, exploring every nook and cranny. 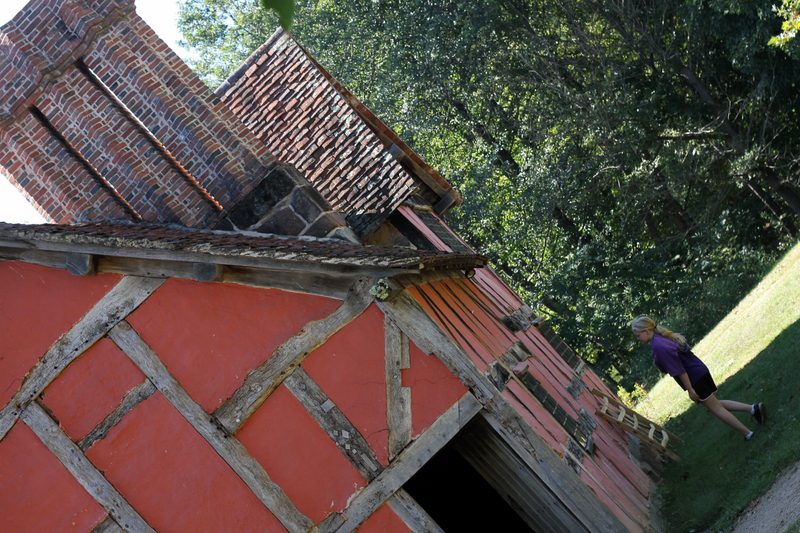 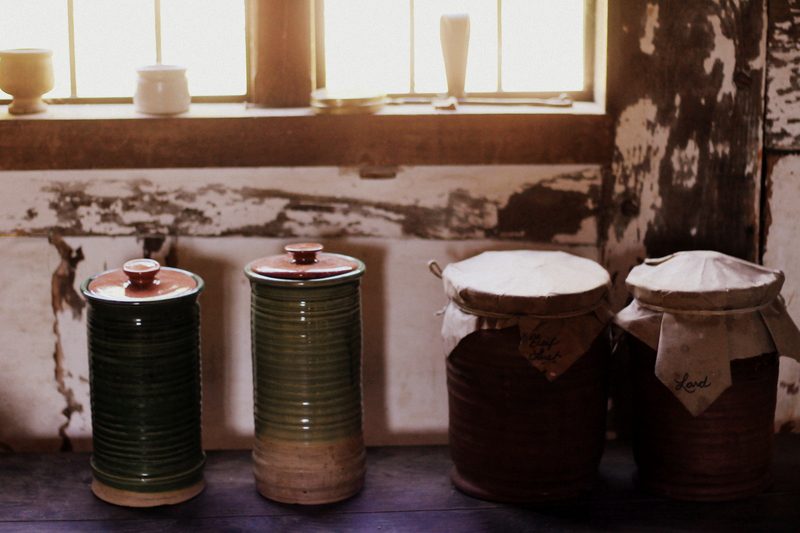 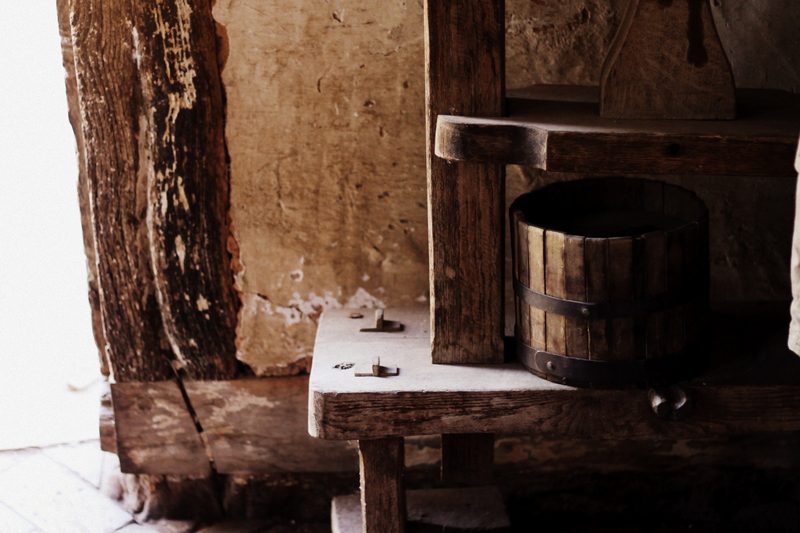 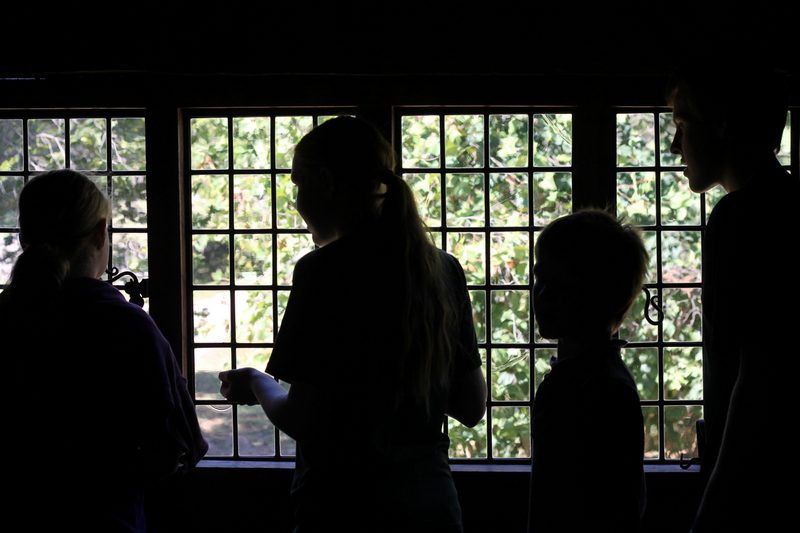 Toss four kids several hundred years back in history and things are bound to get interesting. The long dining room table was just right for a fierce confrontation. Yes, all four could fit in the fireplace. And then they discovered the kitchen bellows and had a Miracle Max attack. 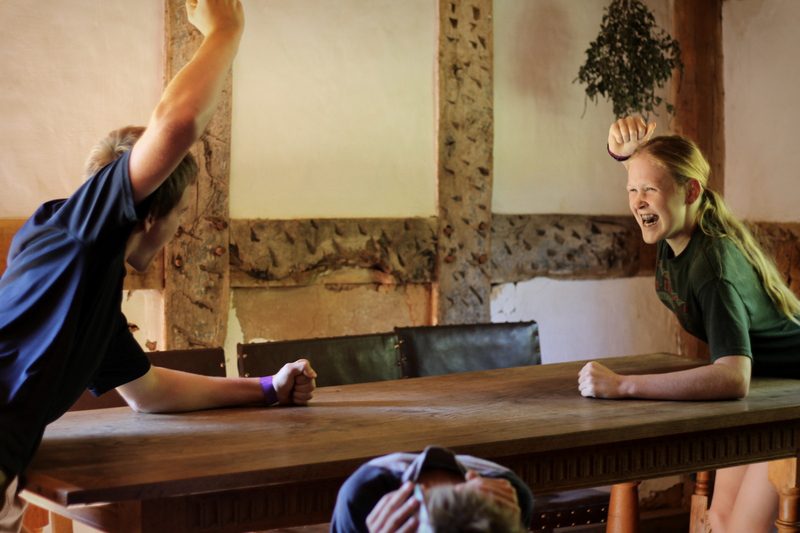 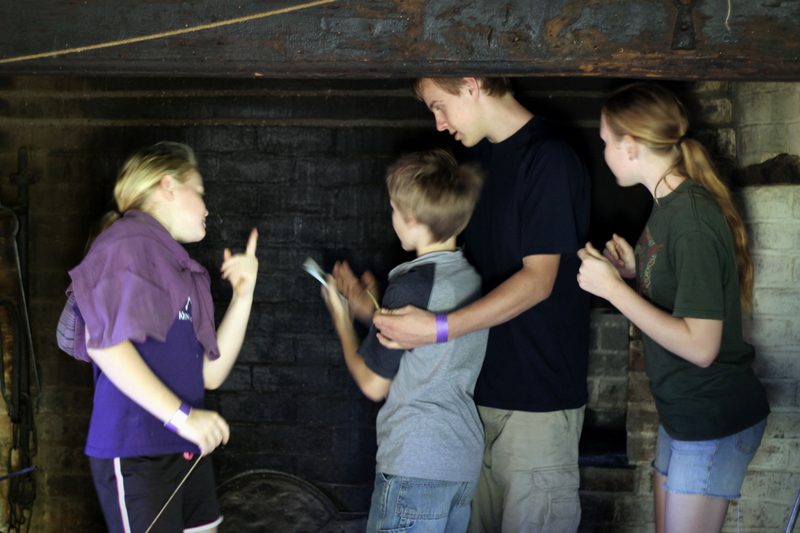 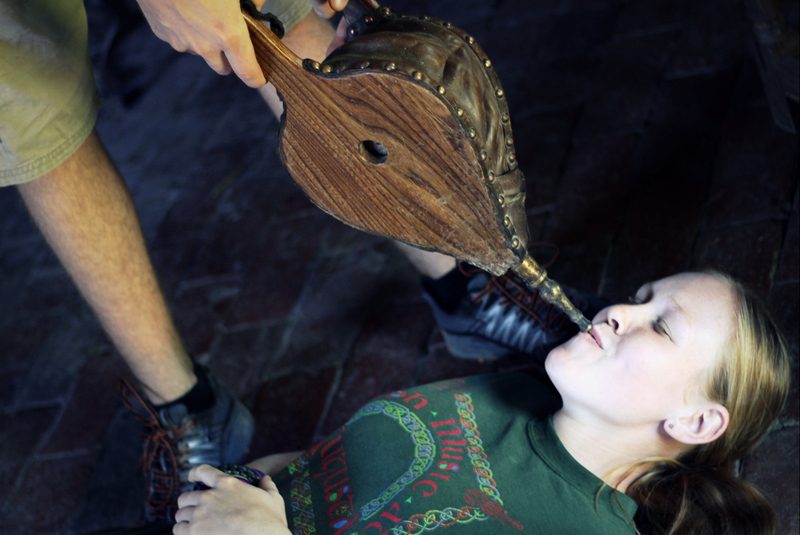 When I spied an English woman in wide-brimmed straw hat bustling down the road to the house, I hissed at the kids to Quick, mind your manners, and then we got the proper tour in which we learned about cheese graters, stale bread pudding, the old refrigerator that’s used for shelving in the locked bedroom upstairs, the geese named Benedict and Beatrice, the best way to tackle sheep for sheering, and the crown of thorns hanging in the kitchen to bless the fields. 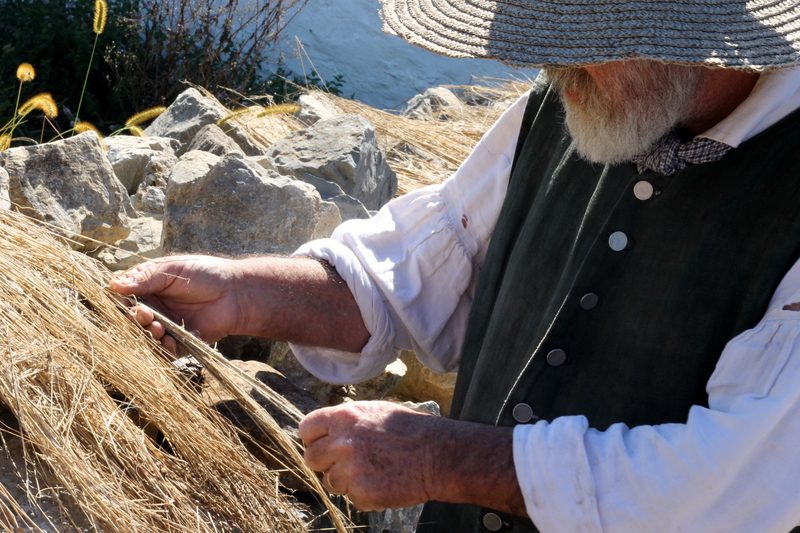 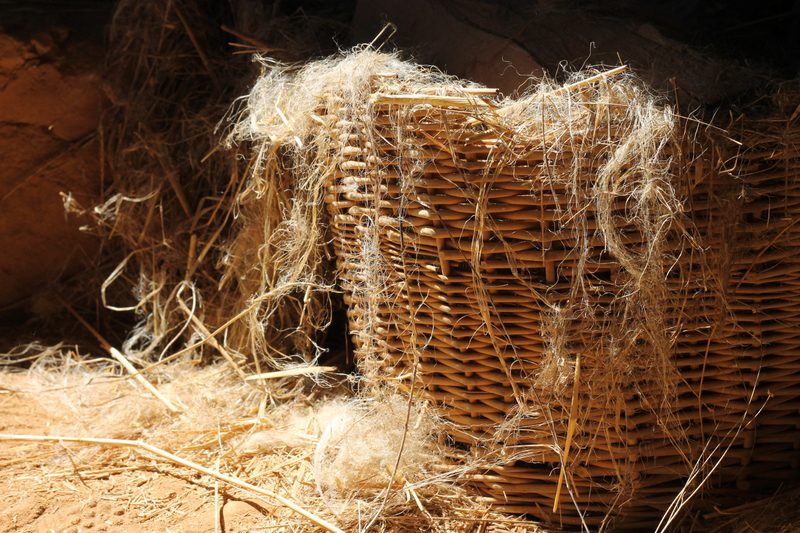 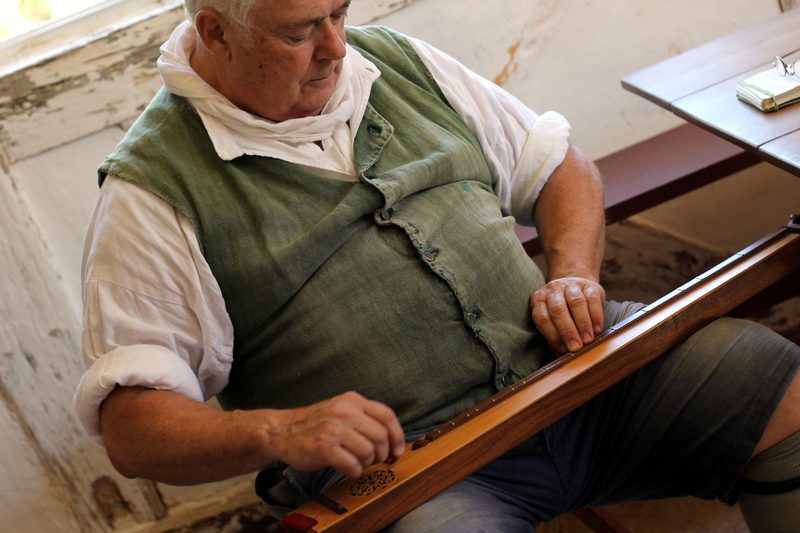 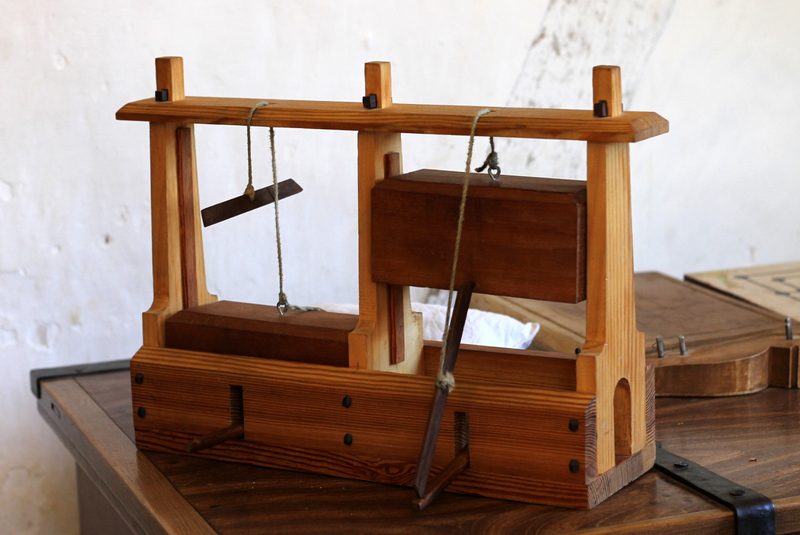 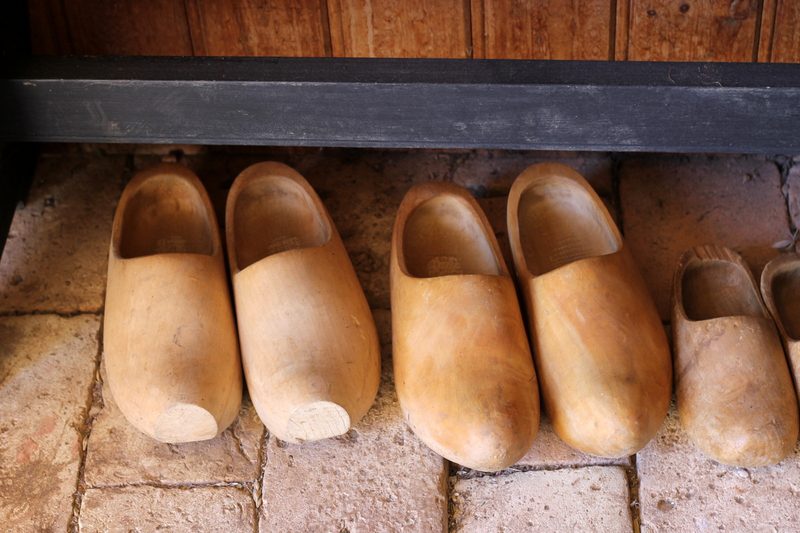 And so it went. At the Irish house, we were entranced by the whole flax-to-linen process, the stone walls, the snoring, very huge, pigs. At the German house there was a well, sauerkraut in the making, and a mousetrap like none other. In the African village we found a snake (not an intentional part of the display, and kind of ironic, considering the entire area was located on swept dirt to keep away the snakes) and learned about growing yams. The boys helped the corset-wearing pioneer woman at the 1740s cabin turn sod for more garden space (in a weird, twisted way it felt like our assistance now eased their burden then) while she proudly showed me her tobacco crop. 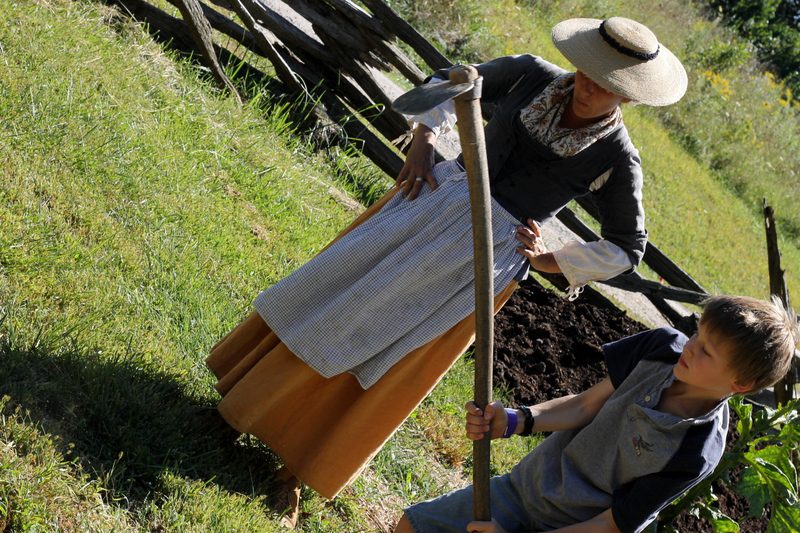 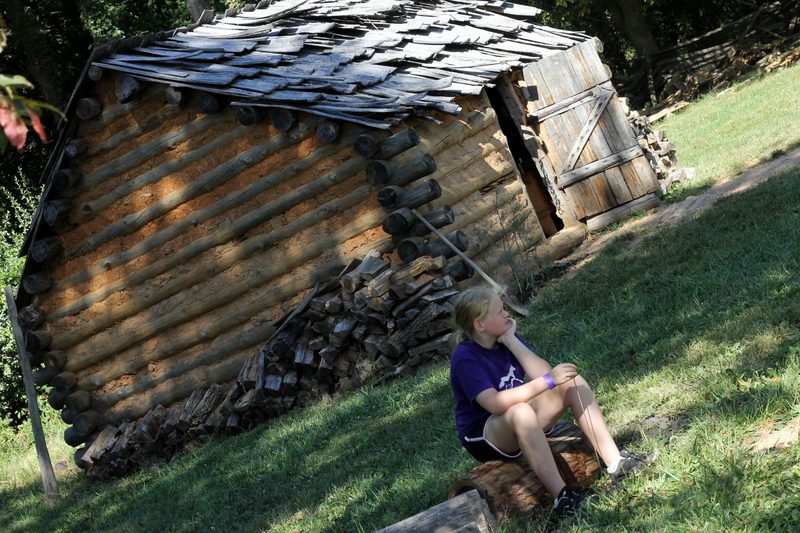 By the end of the day, we were wiped. That night at supper, the kids regaled their papa with story after story, and today, refreshed after a shower and a night of sleep, I keep thinking about our next visit. Would Saturday be too soon?