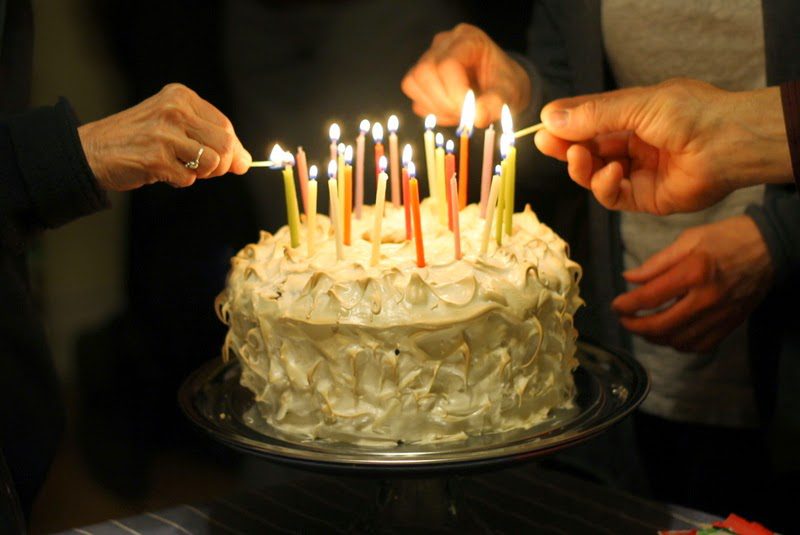 Not my cake, but it makes the point.

I struggle to find the balance between appreciating my increasing age (and the wisdom and experience that comes with it) and grieving the loss of youth and time. So a couple weeks ago I brought up the topic with the young women who meet in my home. I used three quotes to get the group thinking:

The mortality rate is holding at a scandalous 100 percent. (Tim Reider)

I once laughed at the vanity of women of thirty or forty who whitened their ruddy old skin with lead, but now I know such salves are not disguises for old crones who wish to catch a young husband. Instead they are only a mask we wear so that we can, for a little while, still recognize ourselves. (Rebecca Johns, The Countess)

Women may be the one group that grows more radical with age. (Gloria Steinem)

Funny thing was, not a single one of the women in the group was wrestling with the aging issue. They were mostly fine with getting older, and some of them were downright excited.

So then I wondered if this was an age thing (ha). I’m ten years older than the women in the group. Maybe 29-years-olds don’t think about aging and 39-year-olds do? Or am I superficial and immature and they’re extra well-adjusted? So, with the topic stalling, I shifted tactics and asked how their mothers aged. Surely they’ve seen angst there! But again, no. Rather, some of their mothers were giddy—giddy!—about getting grey hair. Which left me scratching my (greying) head because, while grey is beautiful, the fact is, it signifies “winding down” and “lost abilities” and, ultimately—not to be morbid or anything—death. I’m not stressing over those things, mind you, but I’m not exactly eager, either.

Have you seen this interview with Frances McDormand? In it, the naturally (and beautifully) aging actress gently and boldly calls out women (specifically women in the media, but I’m extending that to include women everywhere) who perpetuate the illusion of everlasting youth. Are we being fair to our daughters and sons when we try to appear what we aren’t? Are we being fair to ourselves? Where’s the line? How to “look nice” and accept the inevitable?

Then again, no matter how down-to-earth we pride ourselves on being, aren’t we all maintaining an image, masking our less-attractive traits while highlighting the nicer ones?

Why is it so hard to age with confidence?

Here’s a thought. Maybe aging is like parenting: it’s super frustrating with the first and second kids, but by baby number three you become more or less resigned to your lot in life as parent. In other words, maybe once I get a full head of grey hair and a face covered in wrinkles I’ll finally stop worrying the topic to death.

I recently learned that women, after going through menopause, experience a huge burst of energy. When I first heard this, I was all like, Wha—? How did I not know this? Because how amazing will it be to have no kids, the house paid off, and a surge of energy for who-knows-what and the-sky’s-the-limit? In the midst of my angst, this unanticipated reprieve was a balm. Aging isn’t all about winding down. There are up-swings, too. For the first time I actually felt excited for the next stage.

‘Course, maybe I’m blowing everything out of proportion. Maybe my particular burst of energy will be wildly underwhelming. But really, at this point I don’t care. Just the mere hope is enough to boost my spirits. Onward ho!

The other day when my husband and I were discussing the aging conundrum, he told me about a report he heard on NPR, the gist of which was: they put a bunch of old people in a room and told them they couldn’t talk about anything that had happened after, say, 1950. The room was time-period appropriate, with old magazines and such (I suppose, anyway). The researchers ran tests on the people before and after their time in the room. The people were healthier, more energetic, and appeared more youthful in photos after their 1950’s hangout. In other words, thinking you’re younger can actually make you younger.

Another example of this mind-over-matter trick: you know how nurses are always on their feet, but many of them aren’t healthy and say they have no time to workout? Well, the researchers told them that they needed to treat their job as a workout. Basically, they were to pretend they were working out all day. Sure enough, their weight dropped, general health improved, and so on.

Maybe the best way to deal with aging is to pretend it’s not happening? I mean, prepare a will, draw up a funeral plan, and have realistic expectations about how many (and what sort of) interventions you’ll do and then turn a blind eye? Like, instead of doing the crossword puzzles to keep the mind from atrophying, do them because they’re fun! Or, instead of working out to shore up the decrepit muscles, exercise because it feels awesome! Instead of retiring because you can’t keep up, move on because you have other things on which you want to focus your energy! It’s not lying, it’s just reframing. Right?

Is this too Pollyanna-ish? Or is it just plain smart?