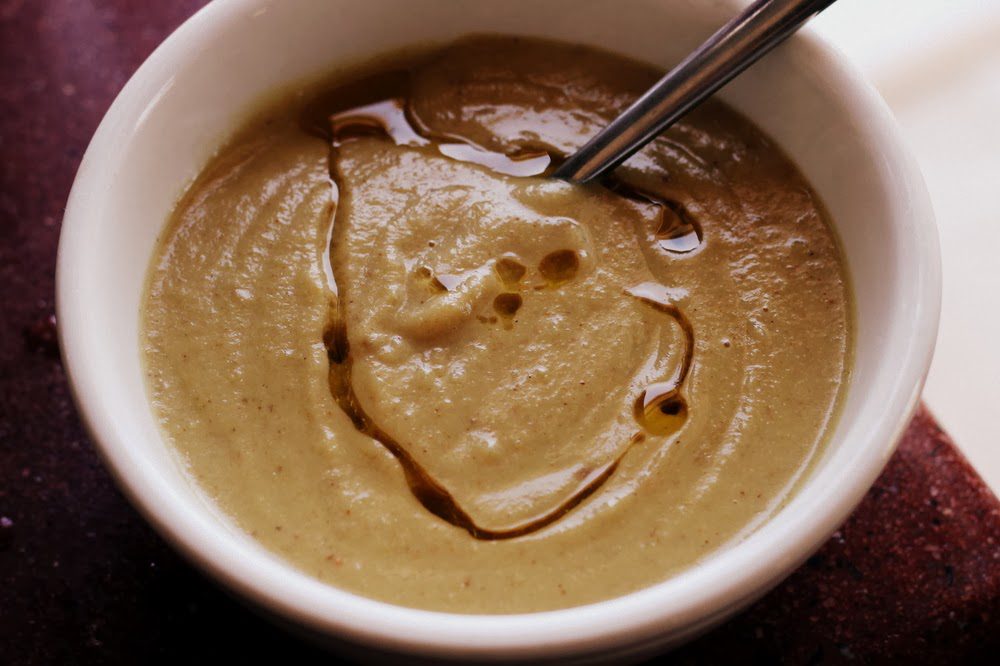 Seriously. I’m not even playing. You have got to listen to me.

Because, PEOPLE OH MY WORD I HAVEN’T MADE SOMETHING THIS GOOD IN AGES.

It’s not flashy and it’s not complicated but it will win you over with one bite promise. It’s a keeper, this one is.

My process for getting around to making the soup—and it’s a roasted cauliflower soup we’re talking about here—was rather awkward, I admit. I first spied the recipe on a blog, a recipe which I recollected at the grocery store. So I picked out a cauliflower, but without any great conviction because, cauliflower meh.

The head sat in my fridge for most of a week until Saturday when I decided it was time for some serious cooking. So, in the midst of making a pot of broccoli soup, roasting and/or simmering four butternut squashes, mixing up a double batch of biscuits, and completing an array of sundry tasks, I turned the cauliflower into soup.

I chopped the lumpy head into florets, drizzled them with olive oil, and slipped the pan into the oven before going to the computer to look up the soup specifics. I thought the recipe was Luisa’s), but—Oh no! She didn’t have a recent post about cauliflower soup! To make a desperate situation even more desperate, I couldn’t seem to access any posts beyond the ones found on her opening page. How long ago had I read that recipe anyway? Perhaps she had posted it several months ago? My memory is a shoddy affair. So I shot Luisa a quick email explaining the problem and then, of course, promptly found the little arrow sitting pretty at the bottom of her page. After another email in which I told her to disregard the first—“and it wasn’t you who posted that recipe apparently… (sticks head in toilet and flushes)”—I started flipping through the blogs I most often find inspiring. After a bit of fruitless tooling around, I remembered: Joy the Baker!

I did a recipe skim-through and then yanked the tray of sizzling cauliflower half out of the oven to sprinkle it with the missing ingredients: cumin seeds, curry, and chile cobán. I sauteed an onion and some garlic in a pat of butter and bit of olive oil, doused it all with a quart of chicken broth, and then added the roasted cauliflower straight from the oven. I added a cup of mashed potatoes (my only serious deviance) I found buried in the back of the fridge, left over from my crazy-day sweet rolls. A gentle simmer, a quick blend with the immersion blender, a taste test, and—ba-bam—I collapsed in a heap on the floor, eyes rolled back in their sockets. So good.

(Clarification: I did not literally collapse on the floor. That was an exaggeration to illustrate how I felt about the riotous flavors. Actually, laying on the floor would have been a foolish thing to do because it’s hard to eat soup from a prone position, particularly when the bowl of soup is on the table and I am three feet below it. My arms simply aren’t long enough to reach. Plus, the kitchen tiles are hard and cold.) 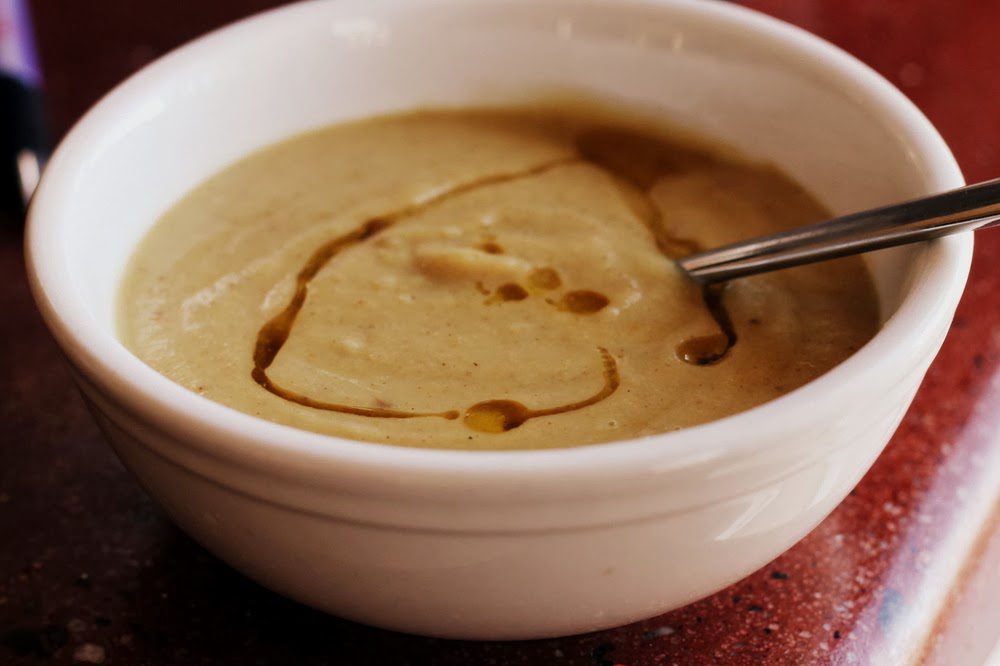 I ate two bowls for lunch and sent a pint jar of soup over to my sister-in-law’s house with precise serving instructions: heat it up in a mug and drizzle a little olive oil on top. She had just had a baby a few hours before and the soup struck me as being the ideal snack for a postpartum mama.

There is one pint left in the fridge. I tried to coax my son to drink it (the one who has been on a liquid diet), but my heart wasn’t in it. I really didn’t want to share. He shunned my offer, as I suspected he would, and now I’m happily anticipating my next eating opportunity. 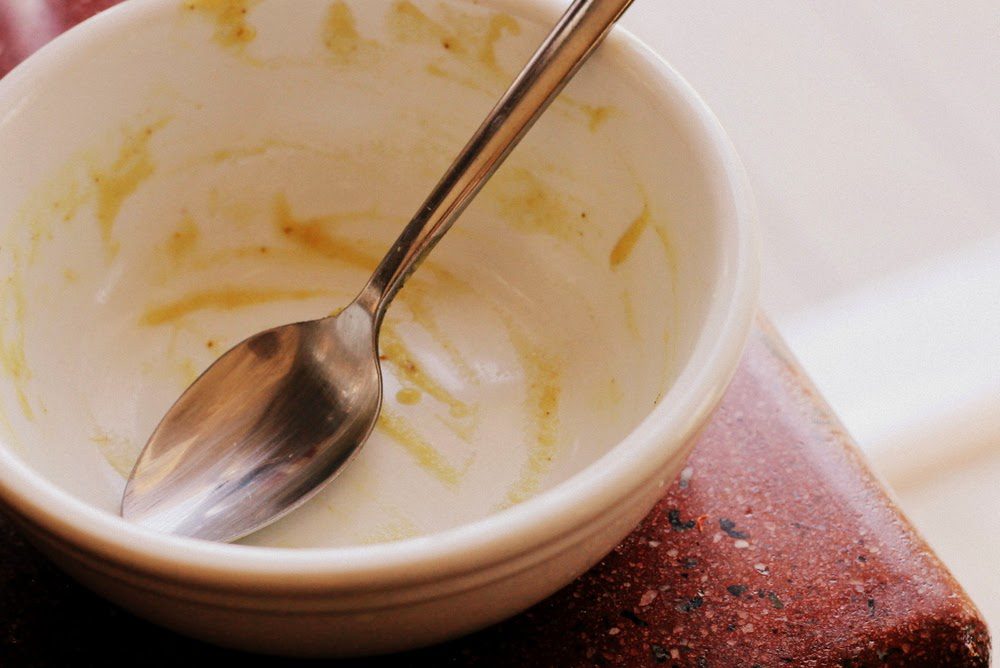 I used chile cobán in place of the red pepper flakes. Dried chipotle pepper would be another good option.

I blended a cup of leftover, plain mashed potatoes into the hot soup. It wasn’t a key player, but it made me realize that any number of vegetables could be added to the soup, such as roasted squash, turnips, and potatoes. If you’re okay with the soup going green, toss in some kale. Or carrots for bright yellow. And why not roast the onions and garlic right along with the cauliflower? On the other hand, why complicate things? The soup is perfect—better than perfect—as is.

Cut the cauliflower into florets. Put them on a sided baking tray and drizzle with several tablespoons of olive oil, salt, curry powder, cumin seed, and red pepper flakes. Roast at 400 degrees for about 25 minutes or until the florets’ bottoms are caramelized and they’ve gone tender-crunchy.

While the cauliflower is roasting, saute the onion in the butter along with another tablespoon or two of olive oil (or just use olive oil only). When the onions are tender, add the garlic and cook another couple minutes. Add the broth and the roasted cauliflower (scrape in every last drop of the spice-infused oil). Simmer for 20 minutes or until the cauliflower is completely tender.

Blend the soup until it is creamy smooth. Ladle the soup into bowls and drizzle with olive oil.

P.S. I ended up sharing the last pint of soup with my mother. She fully understood what a tremendous sacrifice I was making, which made the loss bearable. We didn’t save any for my father who was dozing on the couch, though. My generosity only extends so far.