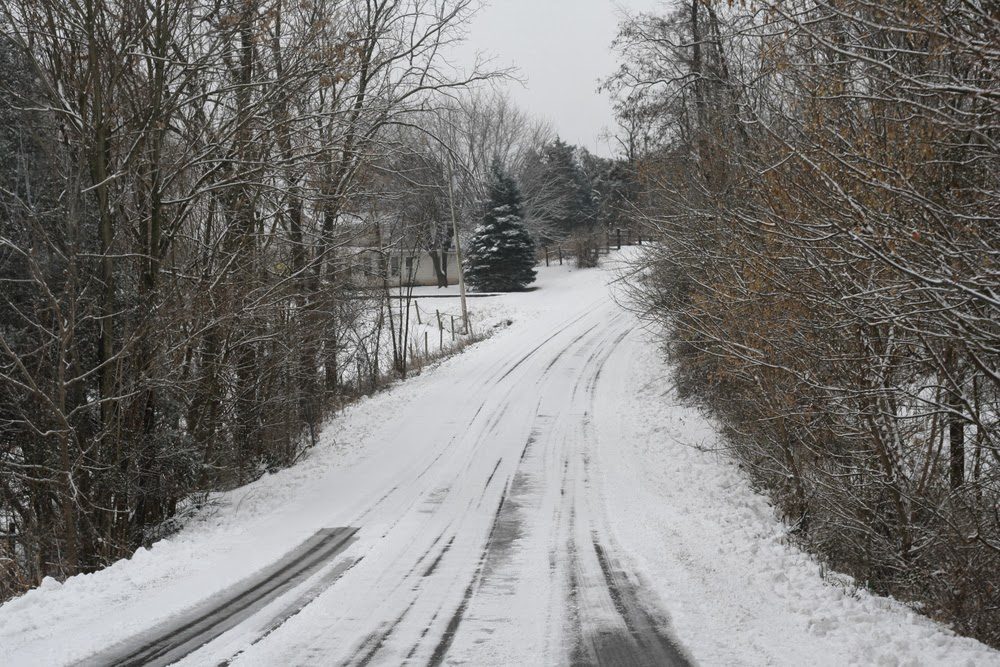 I’ve checked with several sources and the verdict is unanimous: Christmas is a lot of work.

When else do you choose to add “poking thread through popcorn” to your list of daily tasks? Isn’t the cooking, laundry, house pick-up, errands, and simply existing enough already? It’s crazy, guys. We’re up to our eyeballs in planning for family gatherings and then to top it all off we have to pick out a tree and decorate it, listen to music, be relaxed and festive, bake an insane amount of cookies, go to parties, and feel happy-appy-appy all the time. No wonder half the world’s breakdowns happen in December. 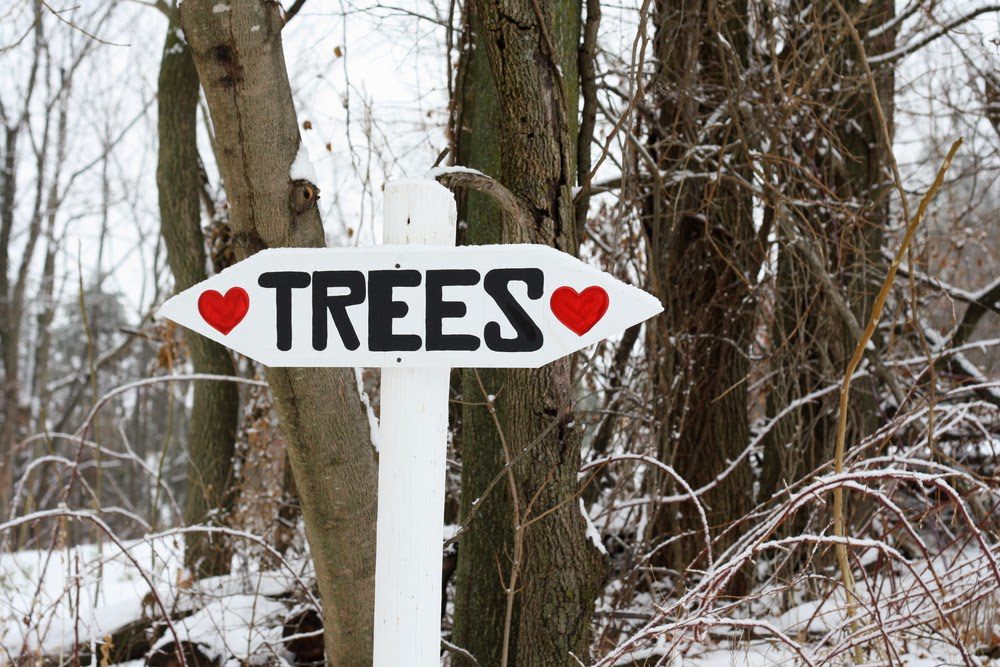 What makes it all the more stressful is that these extra, celebratory activities must be done together, as a family. Ho, ho, ho and a bottle of rum, please. 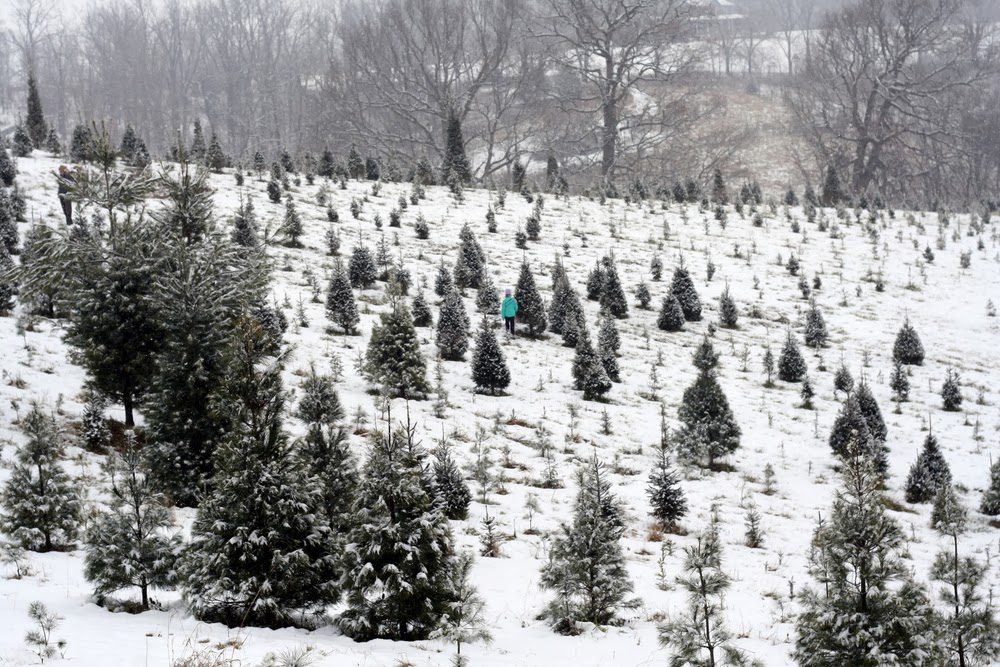 Under normal circumstances, my family does things well together for about 23.4 minutes. Even within that time frame there are the wobblings of breakdowns and and a few sharp reprimands to keep everyone in line. The fact is, the entire time we’re merry-making, we’re teetering on the brink of disaster. This is nerve-racking, at best, and at worst, it’s flat-out terrifying. 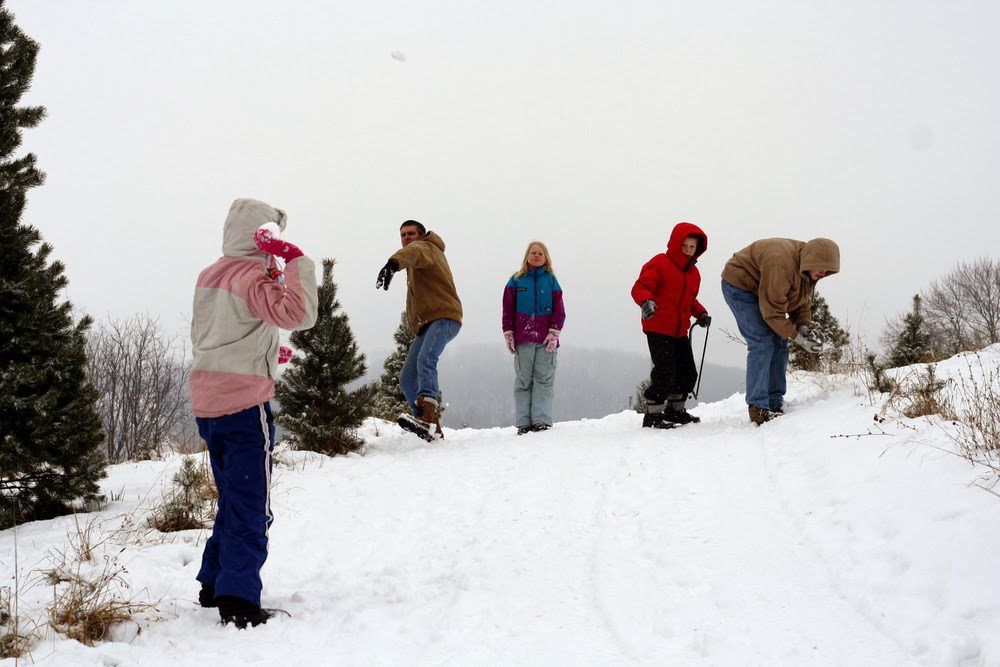 Last week we had five nights in a row of family activities: plays, concerts, a star show, etc. Plus, there was company and tree-getting and tree-decorating and cookie-making and house-cleaning and food-and-stocking-shopping and hot-chocolate-and-donuts-at-bedtime and, and, and… By Sunday afternoon, I was shot. I couldn’t bear one more minute of let’s-be-jolly togetherness. So my husband took all four kids shopping for underwear and I snoozed on the sofa and went for a walk. It was great. Except then they came home (why does that always come as such a shock?) and we had our family movie in the late afternoon followed by another Christmas play, a play in which I had the honor of sitting beside The Child Who Never Ceases To Move and then three kids (of mine! who know better!) filched extra cookies from the refreshment platters and I pretty much lost it all over again. When Monday arrived in all its blank-calendar glory, it was such a relief. 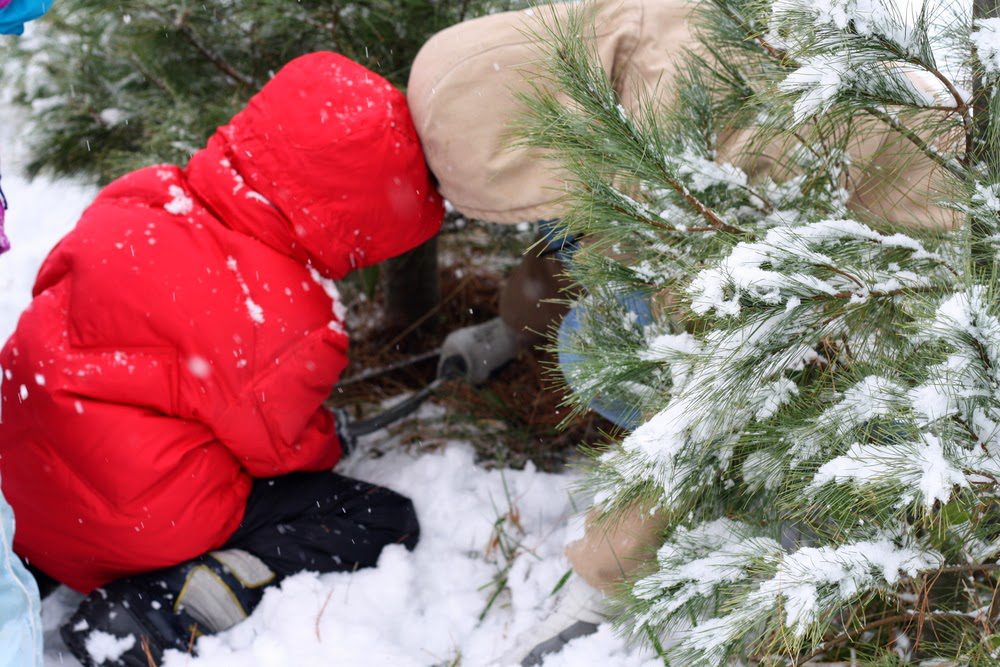 Getting the Christmas tree was fun. Everything was covered in fresh snow and we were the only ones up in the fields (at the start). There were snowball battles. And my older son ran up behind my oblivious husband and yanked his feet out from under him so that he first hung in the air, horizontal with the ground, before crashing face-first into the snow. He came up sputtering, but when he saw me and my son convulsing with mirth, staggering around the field and nearly falling down, he laughed, too. (Later we tried to have a serious talk with our son about why that trick’s not such a good idea because broken bones, but, hahaha, boy oh boy, heeheehee.) 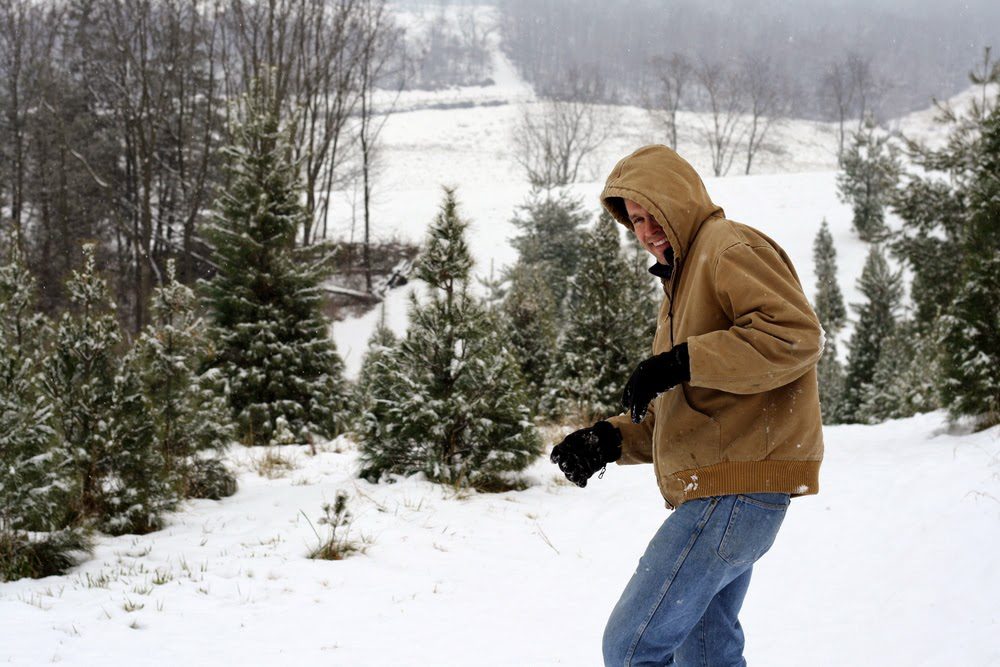 While we were trekking all over the place in search of evergreen perfection, it began to snow. I don’t think I’ve ever picked out a Christmas tree in the falling snow. It was magic, I tell you, pure magic. I had to slip my camera down in my shirt to keep it dry. It made me look mechanically (maniacally?) pregnant, but I didn’t care. It was snowing! 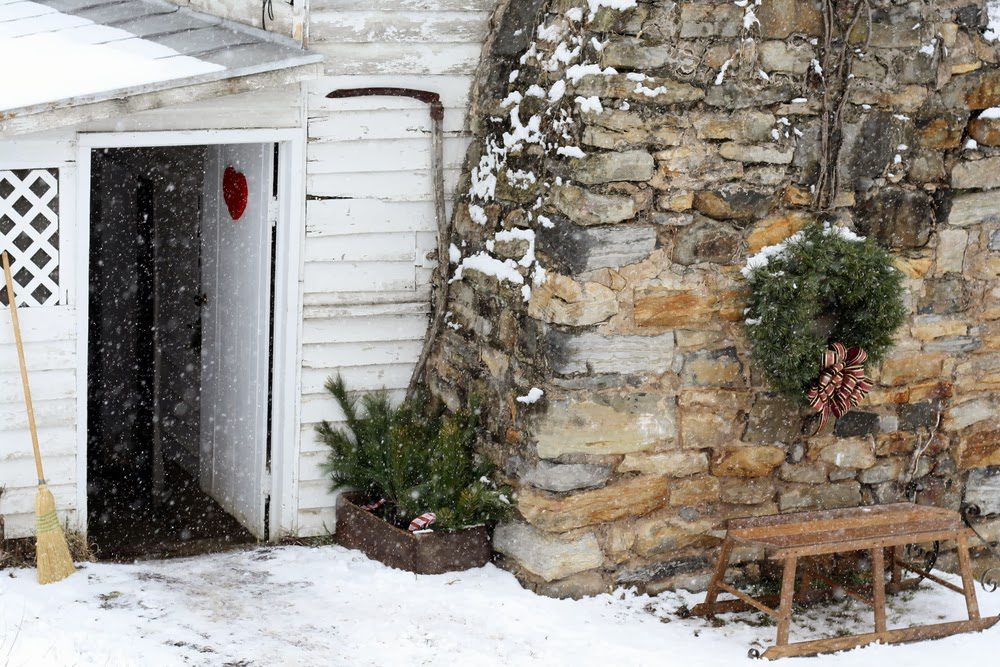 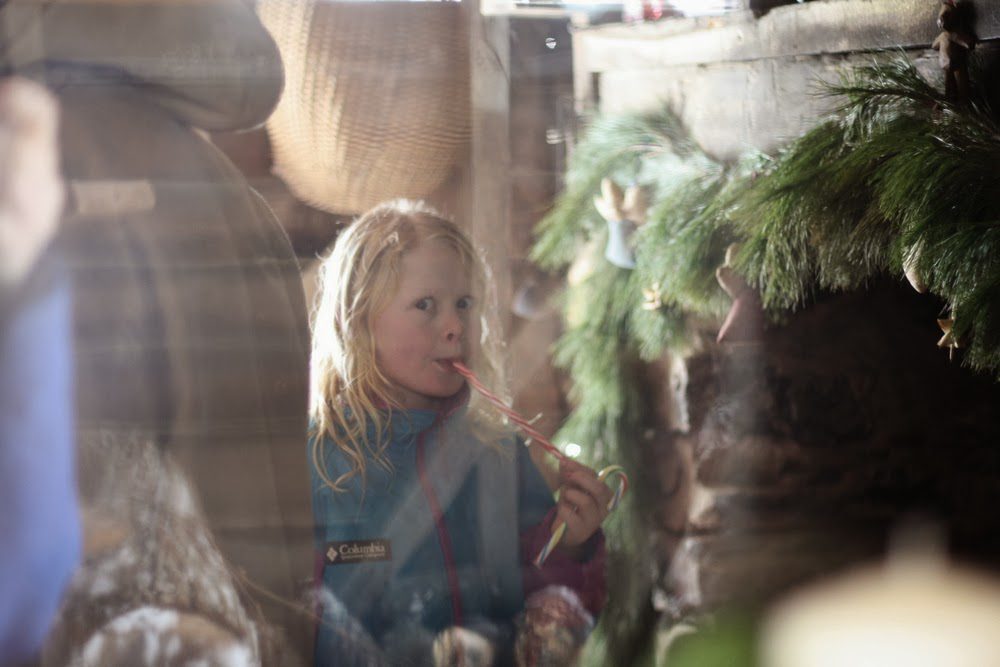 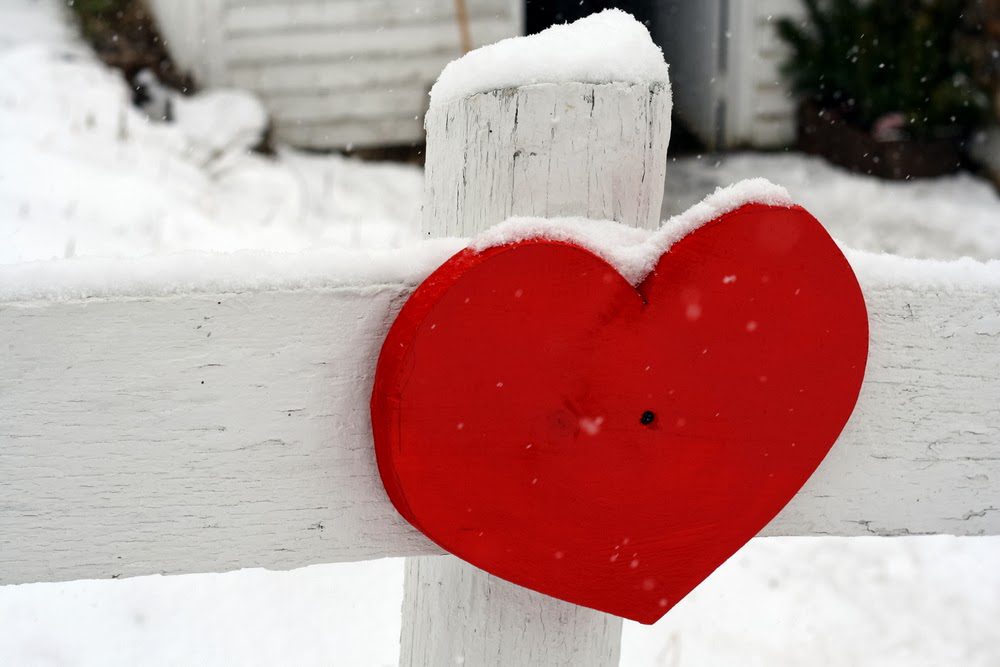 The children delivered the tree to the worker men for shaking, wrapping, and loading, and we all headed over to the springhouse to warm up by the fire and drink hot chocolate and suck on candy canes. 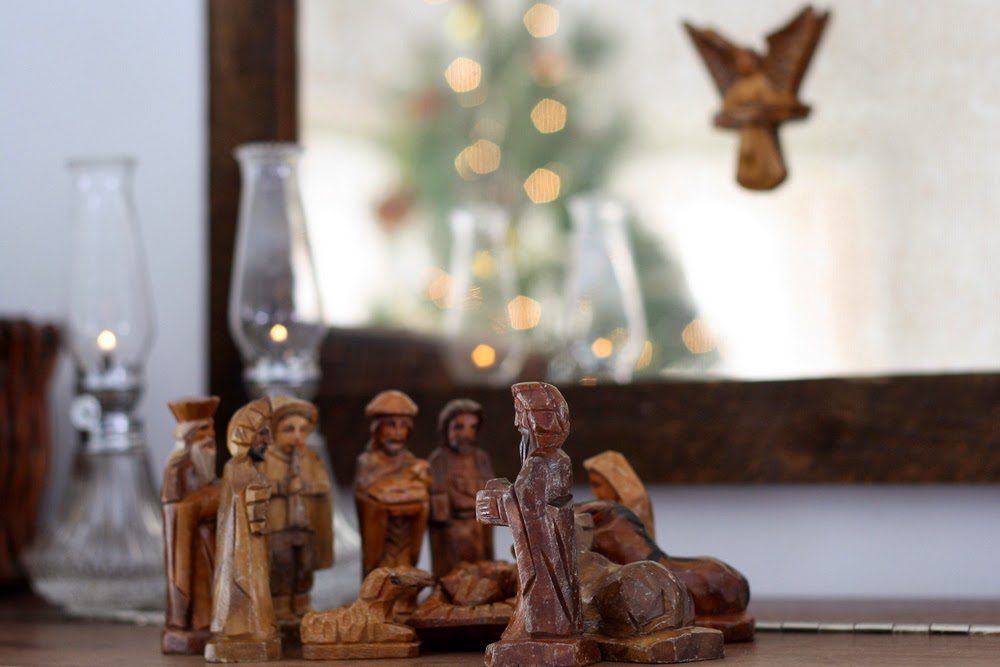 Now the tree is up and, as I type this, the kids are fighting over whose ornaments are whose. Why am I not surprised?