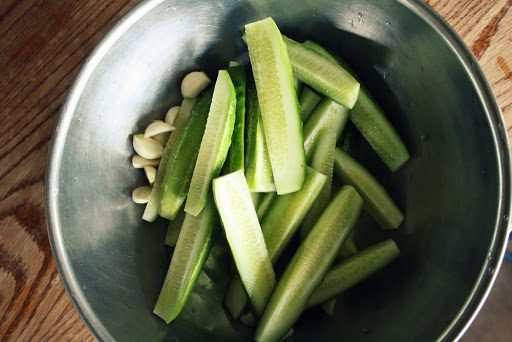 I’ve given up on the cucumbers. I got sick of picking a large bowlful every other day for weeks on end and last week I decided I was done with them. Now there are a whole bunch of swollen cucumbers loitering in the long row of tangly vines and I could care less.

I still have one whole crisper drawer stuffed full of cukes, but I’m even losing interest in those and now they’re turning floppy and a sickly yellow.

We ate a ton of the cucumbers fresh (okay, so not quite a ton), and I managed to put up 17 quarts of sweet pickles and several recipes of pickle relish. My family isn’t overly fond of dill pickles so I just made a small batch of refrigerator dills. Lo and behold, some of the kids actually fell head over heels for them!

I pulled the jar out of the fridge one night for a bedtime snack when my brother and his friend were visiting (to counteract the glasses of wine and the brandy-soaked piece of honey bread my brother created, GAG), and we plowed through them like we’d never eaten pickles before. 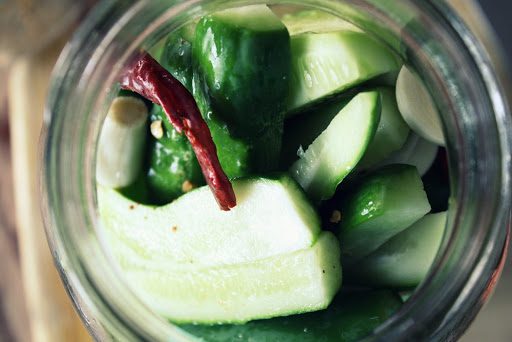 So I made another batch. I served them along with our grilled hamburgers (done properly this time!)  and hotdogs when my parents were visiting and my mother couldn’t stop eating them. In fact, after the meal she apologized for eating so many which caused me to roll my eyes at her. “You’re supposed to eat them, Mom!” 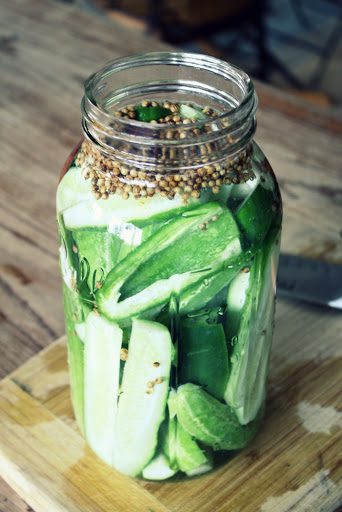 Before my picked cucumbers shrivel up beyond salvation, I should probably make another batch or two to carry us through the end of the summer. There are sure to be at least a few more cookouts and late-night cravings for the salty crunchies. 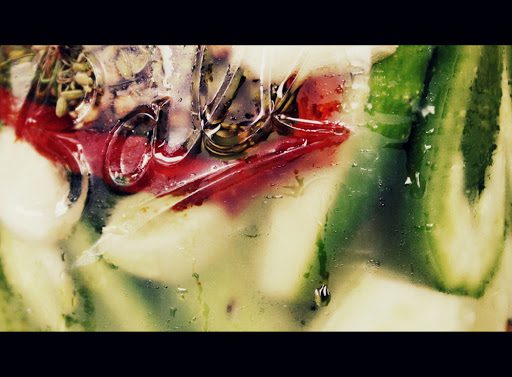 Despite my use of the adjective “salty,” these pickles aren’t overly salty. In fact, they aren’t overly anything—not too garlicky, dilly, vinegary, or spicy. Just wonderfully light and crisp.

You can use any kind of hot pepper. I usually use jalapenos, though I like to throw in a dried red pepper for pretty. For more kick, leave in the seeds.

Cut the cucumbers lengthwise into quarters. Peel the garlic and cut in half. Cut the peppers in half and remove seeds, if desired. Stuff all the vegetables, plus the dill, into a half gallon jar.

Store the soon-to-be pickles in the fridge. Every once in a while, give the jar a shake to blend the flavors. (Sometimes I flip the jar upside down for a few hours). After about 48 hours, the pickles are ready to eat.

PS. I first titled these pickles “Crunchy Refrigerator Dill Pickles,” but then I thought maybe that sounded like my refrigerator was crunchy. It is, I suppose, but that wasn’t what I was trying to say. I suppose I could’ve written it “Crunchy, Refrigerator Dill Pickles” but I found the comma distracting. So I omitted the word “refrigerator”even though it was a rather important adjective. There’s really no point to this paragraph, except maybe to apologize for the missing adjective. Which you didn’t even know was supposed to be there until I went and told you. So maybe I should just shut up now.