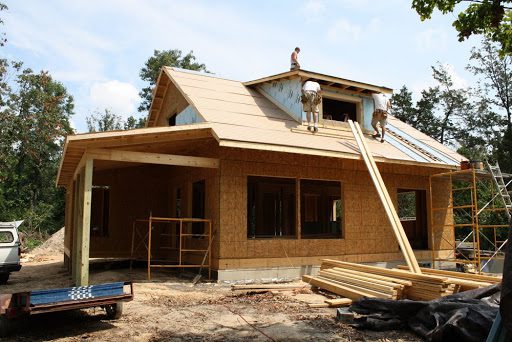 Two days ago, I went up to the property to drop off lunches for my husband and older son. My son had been spending his days banging around the property with his friend (the friend’s father was working on my parents’ house). I had four kids in the car with me, two of which weren’t mine. They were all thrilled to go up to The Property. Visiting the campsite (fire! Grandmommy’s snacks!) and running around in the undergrowth is Kid Heaven.

My youngest son had spent the night tenting with my parents. He was all excited about his adventures (and seeing me again, of course). Apparently, some wild animal invaded the camp and smashed the jar of peanut butter. My son slept through the intrusion but still managed to be pretty excited about it nonetheless. 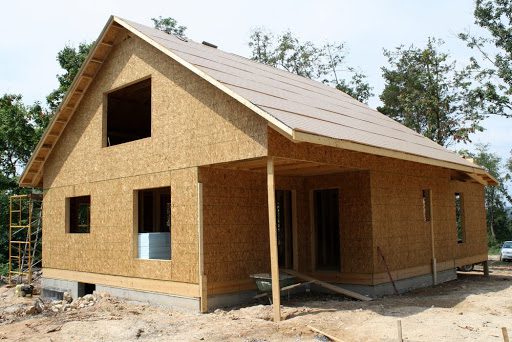 I took lots of pictures of the house. 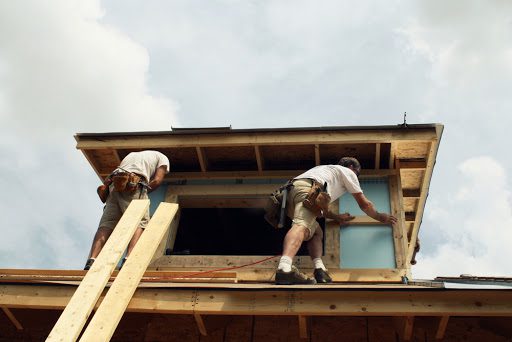 Certain people want to see it (will these do?), and since my parents don’t own a camera (it’s against their religion) (I’m kidding!), I consider it my daughterly duty to document up the wazoo. 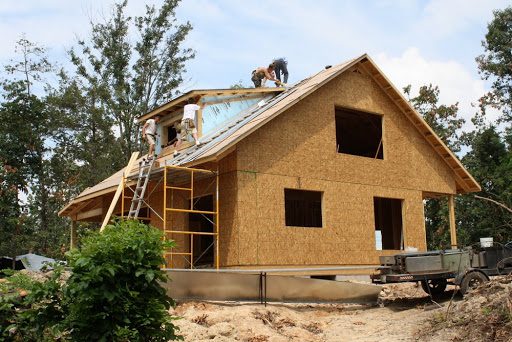 The roofers were there. Putting down metal roof is a hot business. They told my husband that it’s about 15 degrees hotter on the roof than on the ground. During the heat wave, it must’ve been brutal! However, I think that if they were at all Martha Stewart about their steamy sitcheeyation, they could’ve multi-tasked and baked granola and dried strawberries while they were frying their brains out. 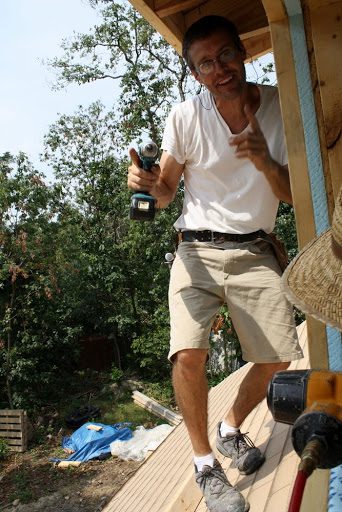 My husband was working on the roof, too. When I leaned out the window to take a picture of him, he danced a jig for me. 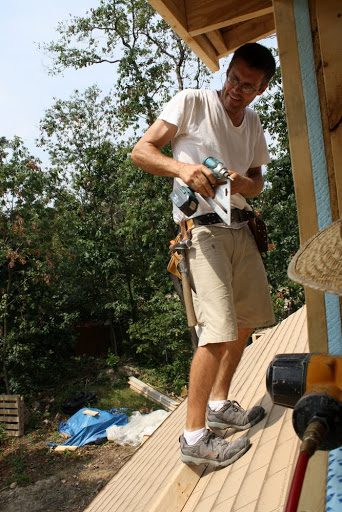 I don’t like to watch him work on roofs. I know he does it all the time, but still, I’d just rather not know exactly how high up he is. Though now I can see why he complains of his calves hurting after a day on a roof. Bending my ankles at that angle for hours would probably make me cry.

My daughter found a tick on herself and took it to my father The Biology Teacher to identify. 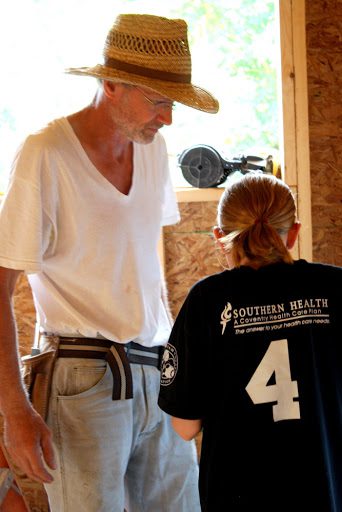 Ever since people in our neck of the woods have been breaking out in Lyme’s classic bull’s-eye rash, we are all a little on edge about ticks these days. I’ve made all the kids look at pictures, and I’ve lectured them about the symptoms and told them they must inform an adult the very second they see anything unusual.

(So, after my lecture. what did my older daughter do? She went to her room and drew a bull’s-eye on her leg and then came downstairs and said, “You mean like this, Mom?” She almost got me.)

(As I’m typing this, my youngest is tossing about on the floor with a fever. Perhaps I ought to inspect his burning-up little body?)

(One of the symptoms of Lyme’s—only 50 percent of infected people get the classic rash—is an altered mood. Which cracks me up because altered moods are the norm for my family. In other words, if we get Lyme Disease but no bull’s-eye rash, and we’re left with just An Altered Mood as our only identifying symptom, we’re screwed.) 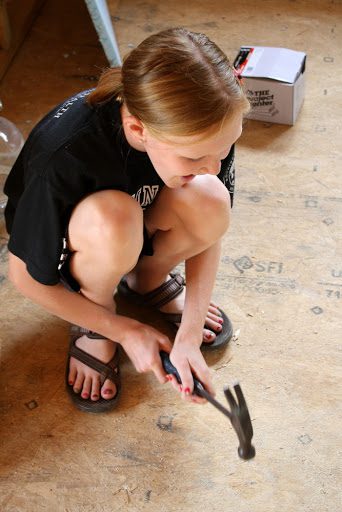 But anyway, my daughter took the tick to my dad and he declared it a normal one and handed her the hammer.

She smashed it into oblivion and that was that. Our at-home extermination method of choice is Burning at the Toothpick. If this sounds cruel to you, it’s not. The little buggers are hard to kill and death by fire is quick and immediate. 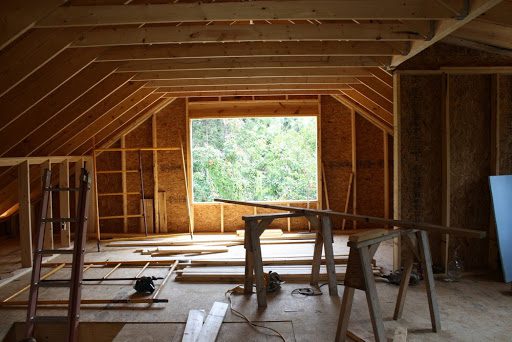 Here is the sun-filled upstairs. Look at that enormous window! 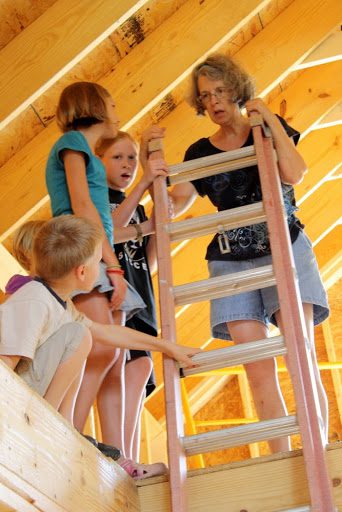 The kids think the ladder is fun. I think it’s too slippy-sliddy.

By the time I had finished photographing the house from every angle imaginable, I realized that I still hadn’t seen my older son and his friend. They were building a fort down in the woods, I was informed.

As I struck off into the woods, I noticed that I was hearing the buzz of power tools from both behind and ahead of me. The boys were building a fort with power tools?

And then I turned a corner and there was the beginnings of a fort rising up out of the forest floor. 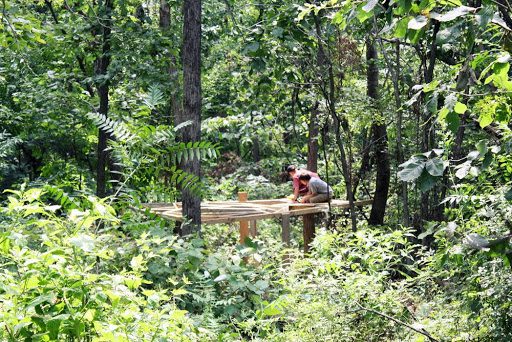 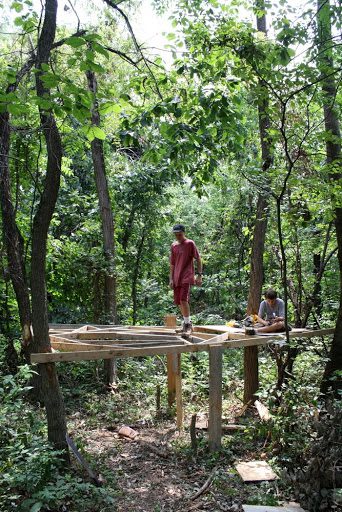 I was also concerned that it wasn’t braced adequately and said so. 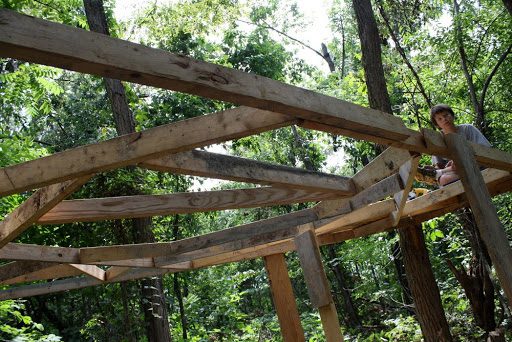 “Has Papa seen it?” I said. “I think he ought to see it. He can give you some
pointers.” 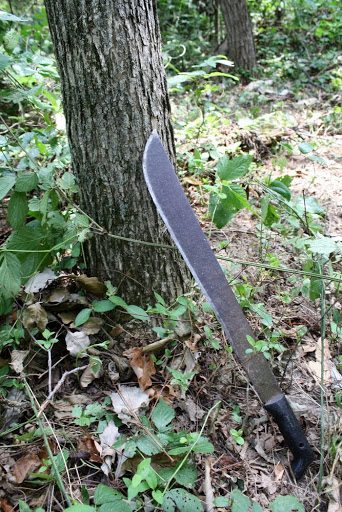 Despite the whirring blades and machetes, the boys seemed to have all their fingers and toes intact (though the friend did hammer one of his phalanges while I was visiting), so I bid them adieu and headed back to the house. 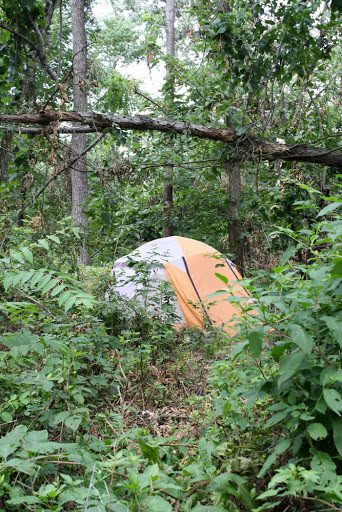 On the way I spotted my son’s tent in the underbrush. Did he leave home and not tell me? 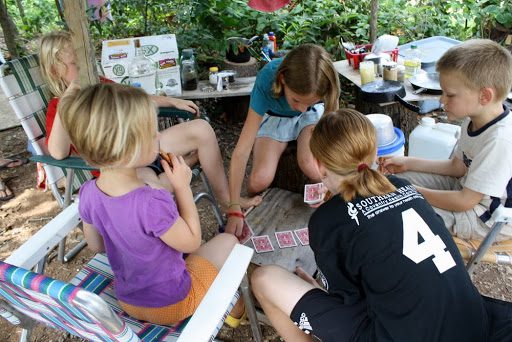 Back at the campsite, I had to break up the card-playing festivities in order to get everyone loaded up in the van again.

Oh, and by the way, this is the water bucket: 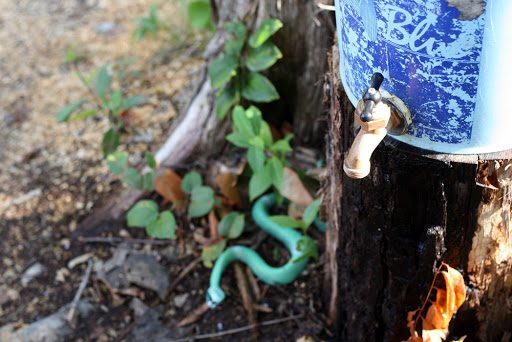 The next morning, we went over to the property first thing. My mother had invited us all over for pancakes in the woods. 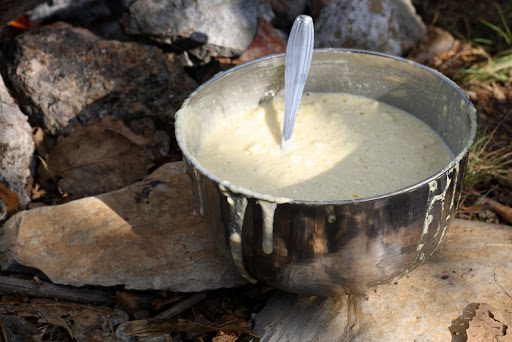 Since my husband has been telling me about her incredible pancakes—he’s been the recipient of her fireside cooking on more than one occasion—I wasn’t about the turn down the invitation. 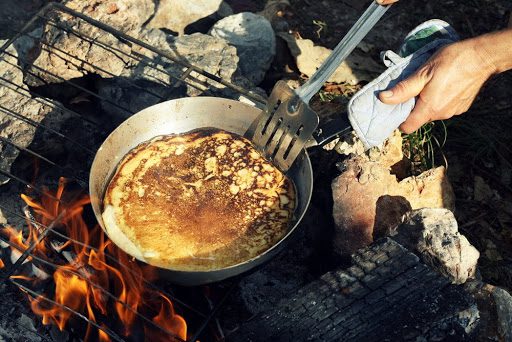 The pancakes were delicious, buttery and crispy around the edges and tender-fluffy in the middle. 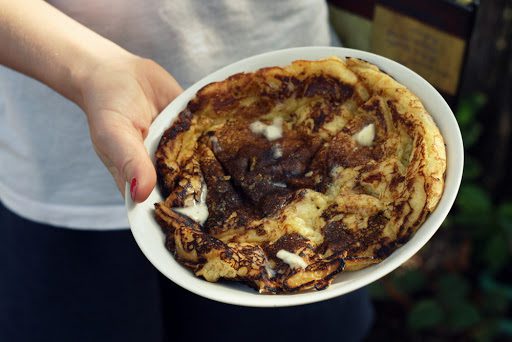 I ate a whole one and it filled me right up.