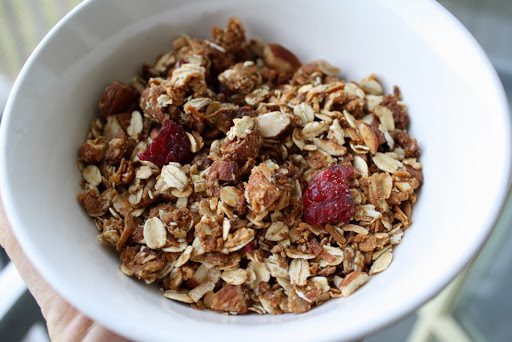 I was raised with a father and two brothers who would eat almost anything, and in monstrous-large portions, too. I was pretty much just like them—in middle and high school (until I became obsessed with starving myself), I finished up all the leftover food on my friends’ lunch trays, earning myself the nickname of The Garbage Disposal. (My friends also, in high school, called me The Oatmeal Child, an example of foreshadowing considering I now routinely buy oats by the 50-pound sack and make granola twice a week, along with many batches of oatmeal—cooked, baked, and steamed—and a plethora of oaty baked goods.)

It’s come as quite a shock to my food-loving system that my current dearest and nearest family members don’t eat with abandon. They have preferences and aversions and all the verbal skills necessary to tell me so. Many times, their opinions feel like a curse, a battle to be fought, a force to be reckoned with. (Wait. I said that wrong. I’m the force to be reckoned with.)

However, I’ve had a good 15 years to acclimate to their most unusual behavior and I’m beginning (yes, I’m a slow learner) to realize I kind of (once in a while, maybe, sort of) appreciate it. My family can taste the difference between baked and cooked brown rice, differentiate between pizzas baked in aluminum and insulated pans, and when the apples in the apple crisp are still slightly crunchy, they don’t say, “Oh yay, apple crisp! Sweet!” and munch-crunch it down—they ask me to put it back in the oven because they want it to taste right.

It can be tricky to figure out how many of their opinions are just their hang-ups and how much is actual good advice, but I’m listening to them more, or at least noting their comments, because they are helping me to hone my skills. I have to work to get their approval, and as someone who is more easily pleased, this can be a good thing. (I still expect them to eat most things.)

All that to say, I tried a new granola yesterday.

My oldest daughter—the nit-pickiest one of the whole bunch—went out of her way to inquire about the ingredient list because she thought the granola was “awesome” (or “fabulous,” or some such word that I can’t recall at the moment), kids in general kept sneaking tastes, and my husband—a diehard basic granola fan—told me he was excited for breakfast. The man does not get excited, people. Nor does he think about food. That he was thinking about food and getting excited tells you how monumental this granola is, or at least how much he liked it.  (Also, my family’s exuberance is perhaps directly proportional to the great many recipe flops they endure. Quite possibly, they were giving me lots of positive reinforcement in hopes I’ll lay off the weird-tasting foods.)

As for me, I thoroughly enjoyed the granola. I kept snitching tastes out of the oven while it was baking (and I’m never tempted by uncooked granola), and I’ve been snaking on it constantly. It’s the honey, peanut butter, brown sugar syrup flavors that keep calling me back.

And the crunchy almonds.

And the wisps of toasted coconut.

P.S. I always wondered what granola bars would taste like as granola. Now I know.

P.P.S. Except, not really. Because granola bars have chocolate chips, a variety of nuts and seeds, vanilla extract, and the like. So perhaps there’s another stunning granola experience in my future? 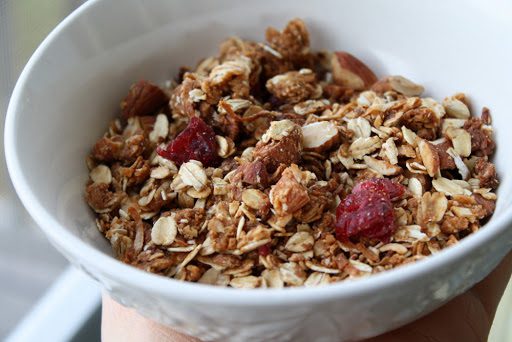 This is extra delicious with cold milk on top. It probably has something to do with the peanut butter undertones.

Also, my granola did not get as chunky as Julie’s. Next time I’ll reduce the amount of oats and/or squeeze the uncooked granola into clumps and then try not to break them up too much when stirring.

Toss the oats, nuts, coconut, and salt together in a large bowl. In a small saucepan, combine the brown sugar, honey, and peanut butter over medium-high heat until creamy. Pour the wet ingredients over the dry and stir to combine. (The wet ingredients were quite thick, almost like cookie dough, so I had to use my fingers to blend it together.) Put the ingredients into a 9 x 13 baking dish and bake at 250 degrees for 60-90 minutes, stirring every fifteen minutes. Cool to room temperature, add dried fruit, and store in an airtight container.