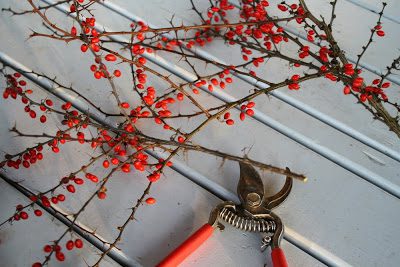 I’m at Panera. I’m writing (obviously), but, I’m pleased to say, it’s efficient writing. So often I procrastinate till I’m bored to death and only then do I begin to string words into sentences and sentences into paragraphs.

Today, however, is different. Today I’m working extra hard because I have a lot to write down, plus I’m feeling a little guilty since I left my husband at home with the four kids and a 300-pound tank to get into the basement and mountains of laundry to hang up in the bitter cold.

He told me to go, though. He said it’s easier for him to do his projects and take care of the kids when I’m gone. He said something about how he hates having to “protect me” when I write at home. The phrase “high maintenance” may have escaped his lips. Humph.

It’s one week and one day till Christmas (like you don’t already know that), and I’m feeling resigned and relaxed and like who gives a big whoop anyway. The tree is up and the kids spend lots of time rearranging the ornaments and dropping them and I don’t really care anymore. Heck, I didn’t even touch the tree except to cut off some boughs for an arrangement: green bits o’ Christmas tree stuck in a milk pitcher along with some violently poke-y red berries I stole from a roadside ditch, fa-la-la, ouch-crap.

I’m sounding more scroogy than I actually am. I throw lots of flour and sugar around in my spare time, and when I venture out, I say Merry Christmas in best holly-jolly fashion. We’re happily ticking off the things on our Christmas to-do list (our next read aloud is The Best Christmas Pageant Ever—have you read it?), and the kids are contented, so all is well. 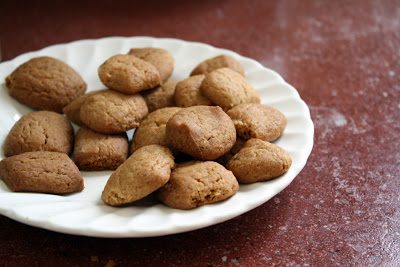 I read about them on my sister-in-law’s sister’s blog and promptly whipped up a batch. The kids went bonkers for them, which surprised me because I have a vague memory of little turned up noses the last time I made the spicy cookies. 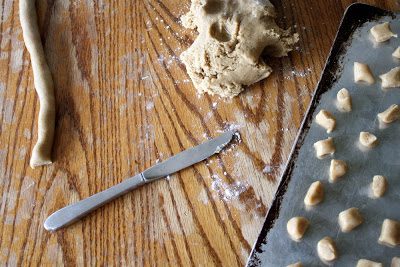 While baking them, I ate a ludicrous amount—my self-control was no match for their tiny peppery selves. Besides, I had to sample each batch to make sure they were the correct hardness. It’s part of the job. 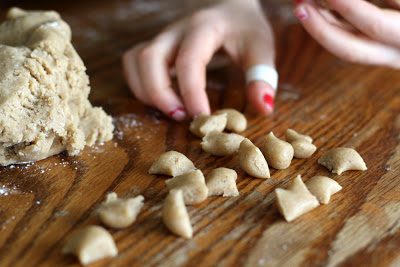 When I finished the baking, my peppernut belly and I went for a walk and then off to a church council dinner where my earlier gluttony prevented me from eating as much as I would’ve liked, and where, when I confessed my reason for not sampling both kinds of soups, I unintentionally sparked a vigorous debate. 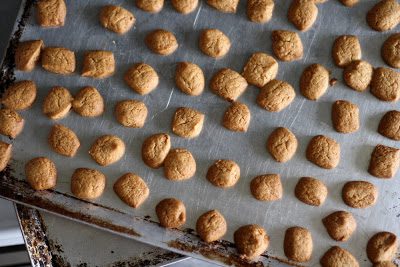 Everyone had a strong opinion about the hard cookies. Some professed complete adoration while others couldn’t see what all the fuss was about. One man said, “I think the reason I like them is because they’re not really that good,” (huh?), and when one member of the group admitted complete ignorance to this food, she was attacked by both parties, the peppernut haters waving their arms dismissively and pooh-poohing all the hoopla while the peppernut lovers rolled their eyes and wailed protestations.

Someone, I do believe it was a hater (can my memory be messing with me?), made mention of one member of the congregation who made excellent peppernuts. They have a wonderful bite, she said. (Are the haters bluffing?) So back home, I fired off an email to The Maker of Excellent Peppernuts, begging her recipe. I got it this morning (it varies only slightly from mine), plus a promise of a peppernut sampling party at church tomorrow, yay! 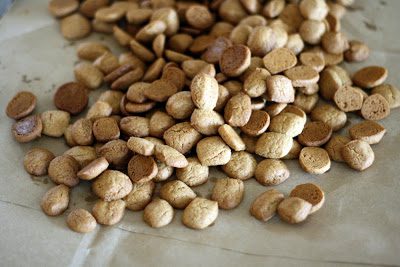 I’m going to go ahead and share the recipe I made this week even though I might not be done experimenting. I can always update with adaptations and variations later, I figure. Besides, according to my family, this recipe is already a winner. 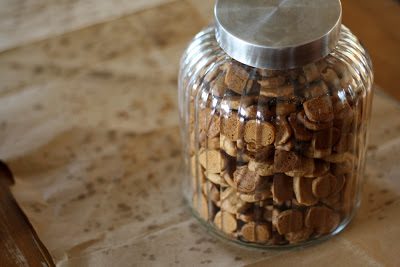 I swapped in a cup of spelt flour and a cup of whole wheat for part of the white flour—delicious. Next time I’ll increase the whole grains to at least four cups.

Beat together the butters and sugars. Add the syrup and sour milk. Beat in the remaining ingredients, but only part of the flour. When everything is well-mixed, exchange your beaters for a large wooden spoon, and—because the mixture will be quite thick—stir in the remaining flour by hand.

Shape the dough into skinny ropes, the size of your pinky finger (assuming you’re not a giant) and cut into quarter-inch pieces. Place the peppernuts on an ungreased baking sheet (they will puff only a little, so you can place them fairly close), and bake at 350 degrees for 10-12 minutes, or until golden brown. (They are supposed to be crunchy, so let a few cool to room temperature and then sample to make sure they are hard all the way through. Adjust your oven time accordingly.)

Cool to room temperature before storing in an airtight container or freezing.

Yield: I’m not sure—we ate so many of them while baking! (But I think at least 1 gallon, and maybe 1 ½ gallons.)