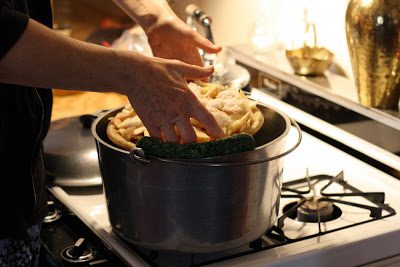 Today’s post is courtesy of my mother, Shirley Kurtz.

In a temper fit this past summer I got hoisted by my own petard.

I wanted hamburgers that evening, cooked on our dinky grill, over a scrap-wood fire instead of storebought charcoal, but my husband and I weren’t smart enough and procrastinated grilling till the heat had started to dissipate. The burgers huddled above the smoke, weakly oozing, rotting. Disgusted at our ineptness—we always seem to bungle meat, even using charcoal—I snatched up the small rusty grate, stomped into the house, and tried to shove it into the kitchen range’s gas broiler (if I’m remembering right). Naw, bad idea. Instead I transferred the patties to a cookie sheet and rammed that in, fuming and muttering.

Days afterward, setting out to bake, I discovered the oven wasn’t heating up. No fire shot out of the element holes, though I seemed to hear the rush of gas. Only later did I catch on. I’d broken my own stove—a tiny gizmo next to the broiler’s pilot light.

My quandary wasn’t unlike that of some years ago near Christmas when the oven knob on the range we owned at the time, a prized, elderly gas/wood cookstove, suddenly gushed flames. I had cheese sandwiches toasting in the skillet. It would be a few weeks till the defective part could be replaced. No oven over the holidays, uh-oh. The crisis reduced us to buying Walmart donuts. Making a birthday cake for me, our 18-year-old carried his batter in pans down the road to the neighbors’ to bake.

But this stove? I wasn’t sure the model now in our possession was worth fixing. It’s the ordinary type—my husband scavenged it from an abandoned, weather-soaked house, paying $15, and although Mr. Handsome Son-in-Law must have thought us insane, he voluntarily took the thing apart, scattering the metal tubes and little jiggy screws across our driveway, scraping off the crud, and then reassembling. But all these years later, the stove’s flabby oven gasket? The oven walls’ evaporated insulation? Why bother with repairs?

I vacillated and vacillated. It’s been months now, and our junker is still all I’ve got. I figure we’ll hit upon another bargain or else I’ll pick out something spanking brand-new. In the meantime I’m resorting to my large cast-aluminum cookpot, pocked in the bottom, with a bucket-type handle and a soaring lid with an eroded black knob, that once belonged to Grandma Kurtz. I’ve inserted a flat cooking rack from another kettle.

This stovetop baking is a mildly tricky operation. No thermostat. And if I preheat the pot I must prop two hot pads inside, against the sides, so I can lower the pie down in without charring my knuckles. Also, any bubbling over results in coal deposits impossible to scrub loose (a jackhammer might work). But, oh my, an apple pie, say, can turn out dazzling. A week or so after the first, I managed three such fruit tarts, causing our whole family who’d collected for the weekend to hiss in surprise and adulation. 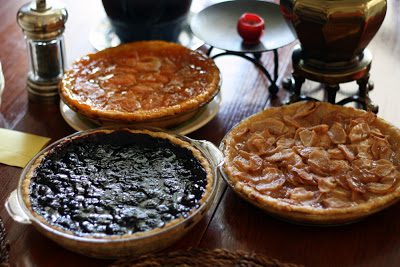 I can roast potatoes in the pot. Squash works, too. No plans for a groundhog quiche like our Pittsburgh son’s, but I have other ideas languishing up my sleeve. Give me time. The pleasure, I think, comes from the warring—the dueling—no, the permission I’m granted to flaunt my contradicting impulses: my frugality as well as my wastrel inclinations. I’m infatuated with the possibilities—the notion of depending upon a stingy blue fringe of burner flame, not hedonistic gusts of oven gas, to procure the most succulent and carnal of temptations.

I don’t expect I’ll get to Jennifer Jo’s pie party. We live 90 miles across the mountains. Besides, a God’s blood pie—what I’d want to bring, like the pies in a long drawn-out story I’ve written, pies as richly grape-y as any communion-cup sip—deserves a perfect crumb topping and I’ve not experimented enough, yet. I’m not positive the pie’s topping crumbs would achieve, in my big old pot, the desired crispiness. But reminiscent of the other dichotomy, that of a certain God-awful savory sacrifice, my consummate sacrificial offering would surely slay the crowd at Jennifer’s house. It’s a dubious, arresting thought. 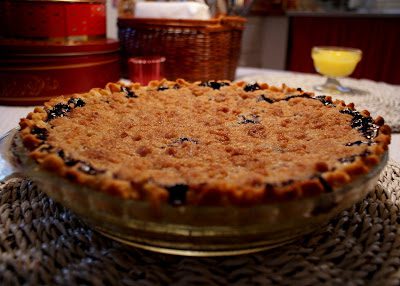 For open-face fruit pies, set the burner flame on medium(?) high(?)—just experiment. When your peeks assure you the pie is done, switch off the burner, keep the kettle lid off, and wait a bit to lift out the pie (for the sake of your knuckles).

For pumpkin pie, hold off on pouring the filling into the crust until you’ve put the pan into the kettle. Like with the fruit pies, let the edges of the crust get quite brown.

A two-crust pie might prove too daunting. Won’t the steam trapped in the kettle make the top crust gluey? Hm, give it a try.

You might accomplish a passable fruit cobbler—the kind with oatmeal crumbs. A cake-type cobbler? Dunno. And what about cookies, dropped onto a sheet of foil? Dunno. Lofty meringue pies? Help!!

Roast large or chunked vegetables by arranging a large piece of tin foil over the cooking rack and up the walls of the kettle and then layering the food inside. To avoid overbrowning, wedge small wads of crumpled foil against the kettle sides where they’re touching bare food or liner foil weighted with food.

How about “oven” fries—potato or sweet potato? And baked corn, in a glass dish? I wonder.