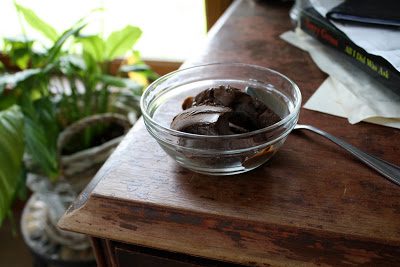 I know I just posted a chocolate ice cream recipe less than two months ago, but oh my, this one must be written about.

Chocolate ice cream has never been this sexy.

It’s like eating a soft chocolate bar that’s cold, or so says my husband. And he’s right. This is ice cream that you can almost chew. It has substance and heft, yet it’s creamy soft.

And it’s so rich that after eating one little scoop I feel like my eyeballs are spinning in their eye sockets like some overly-excited-yet-simultaneously-knocked-out cartoon character. 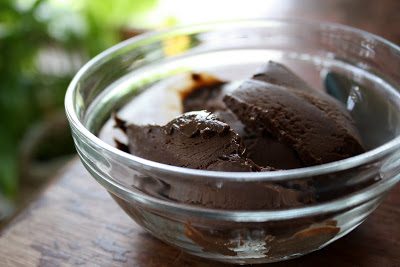 The recipe comes via the latest Bon Appetit magazine, and I should warn you, it has some odd steps. First, it calls for a homemade caramel to be added to the base. And second, the base must sit in the fridge for two days before churning, after which it’s supposed to sit in the freezer for three more days before eating.

A five—FIVE!—day wait? What in the world?

Nowhere in the magazine did it explain the reasoning behind such madness, so I emailed Bon Appetit to get the whole scoop. You tell your readers that it’s important to start the ice cream five days before serving but no explanation is given, I wrote. Could you please explain the necessity of the (excruciating) wait?

I have yet to hear back from them but surely they will answer my question somewhere, somehow, sometime? I have a hard time believing that I’m the only reader who is flummoxed.

Flummoxation aside, the ice cream is top-of-the-line. Whether or not it’s because of the caramel syrup add-in and long wait time, I don’t know. But it’s good, so I’m not about to change things up. 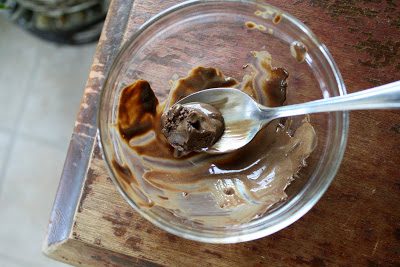 A word about how this recipe is different from the other chocolate ice cream. The other base is like a thin pudding; this base is like a thick pudding. In fact, the base was so thick I was afraid it would burn up my ice cream maker—I turned the machine off when the ice cream was about five minutes shy of done.

The original recipe calls for 70-75 percent chocolate. I used 53 percent and the ice cream was almost black. I can only imagine the profound intensity that 7 ounces of 75 percent would deliver.

I used 7 egg yolks instead of 6. It was an accident (the recipe calls for 7 tablespoons of sugar and 7 ounces of chocolate, so I just assumed it was 7 yolks). It turned out delicious which leads me to believe there isn’t anything magical about the exact number of yolks. I could be wrong, of course. Tell me if I am.

Melt the chocolate in the top of a double boiler. Set aside to cool.

Whisk together the milk and cocoa powder in a sauce pan and bring it to a boil. Remove the pan from the heat and set aside.

Using an electric mixer, beat the egg yolks with 7 tablespoons of sugar for about 2 minutes, or until thick and satiny. Gradually add the hot cocoa-milk mixture to the yolks, whisking steadily. Return the mixture to the saucepan and add the melted chocolate. Stir over low heat till slightly thickened, or the mixture reaches a temperature of 175 degrees. Pour the mixture into a bowl to cool.

Put the remaining 6 tablespoons of sugar and 2 tablespoons of water in small saucepan and cook on medium high heat, swirling occasionally, until the mixture has turned a dark amber. Off heat, gradually whisk in the whipping cream (it will bubble and spit madly). When the caramel is smooth, add it to the chocolate mixture. Strain the ice cream base and put it into the fridge to chill for 2 days.

Churn the ice cream and freeze for 3 days before eating. (Or not.)