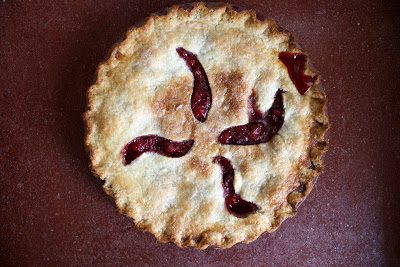 This is the pie I made for Pi Day.

It rocked some serious deliciousness. We ate all but one piece, and my husband took that last piece in his lunch today. 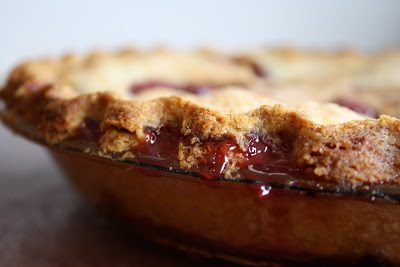 So I was left with no other recourse but to make a cherry cobbler for our lunch. We ate all but this much (after finishing off the last of the chicken curry): 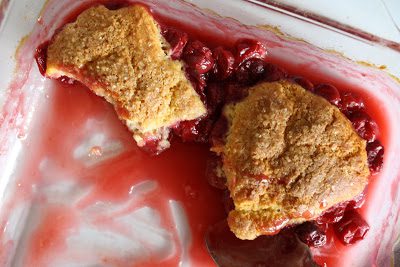 Those of you who have Cherry Envy? You should! It might be cruel to say it, but these cherries are so fabulous that if you aren’t firmly mired in the camp of We Sure Would Like Some Cherries, then something is seriously wrong with you.

My kids didn’t used to like sour cherries. In fact, only one of them was a fan, and even my husband didn’t think they were all that hot. But someone, over the years, they’ve all turned into cherry fanatics. Which is good, because that’s all we’ll be eating for the next several months. 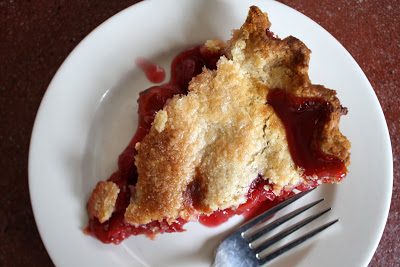 This method of using tapioca to thicken a fruit pie? I dig it. It’s so easy to do, and it gives the pie filling a pleasing texture.

I think a cream cheese pastry might go well with this pie. Next time…

Mix together the tapioca, cornstarch, cinnamon, salt, and sugar. Toss with the cherries. Sprinkle with the vanilla and toss again. Allow the fruit to rest at room temperature for 1-4 hours, stirring occasionally.

Line a 9-inch pie plate with one of the rolled-out disks of dough. Fill with the fruit. Top with the second rolled-out disk of dough (cut a decorative design into it before laying it atop the pie). Crimp to seal the edges. Brush the top crust with milk and sprinkle liberally with sugar.

Set the pie on a foil-lined baking sheet (cherries are notorious for bubbling over) and set the pan on a lower oven rack in a 425 degree oven. After 20 minutes, reduce the temperature to 375 degrees and bake for another 40-60 minutes, or until the crust is golden brown and the juices are bubbling happily. (Line the edges of the pie crust with a foil shield, if necessary.)

Allow the pie to cool for 3 or 4 hours before serving with vanilla ice cream.