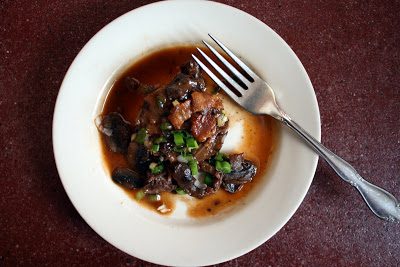 Cooking meat is tricky. At least it is for me, anyway. I never can remember which cut of meat is best for which cooking method, and getting the final product to be tender and succulent seems a hit-or-miss endeavor. To raise my anxiety levels even higher, meat is pricey. It’s not something I want to screw up.

Previously, my approach to cooking large chunks of beef has been to throw together the ingredients and then avert my gaze and hope it turns out okay. It’s kind of like a fellow blogger who allows her kids to sled on ice, a brick wall at the bottom of the hill. When a neighbor asked her if she wasn’t worried about them crashing, she answered, “Oh, definitely… So I make sure not to watch.”

That’s my approach to cooking meat. (And raising kids, too, but that’s not getting discussed right now, despite the fact that I was the one to bring up the analogy.)

I have hustled up some pretty fine beef dinners (this one and this one, for example), but all in all, hunks of beast (as my cousin says) still feel like unchartered territory—wild, unknown, scary, intimidating, unnerving, etc. I’m getting better, though, and last night’s chuck roast helped to boost my confidence exponentially. Today I feel a pressing need to record my method for two reasons: first, so I don’t forget how I did it, and second, so I can better sear the process into my brain—the more I think and talk about the process, the more likely it is to become a part of my cooking repertoire. (I think Point Two is not much different than Point One. I just wanted to drive home The Point, I guess.)

I won’t lie to you—this method is time-consuming and involved. But the end result is swoony, melt-in-your-mouth tender, and so richly flavorful that it’s well worth any amount of sweat and tears. (Of which I did/had neither, but you know what I mean.) Plus, one roast makes a lot of meals, so just consider it batch cooking. 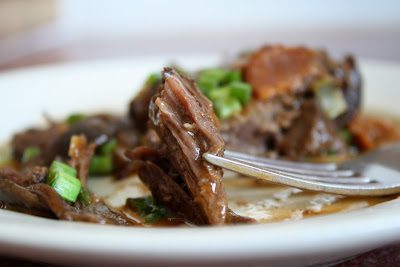 The first steps of a good roast will mess up your kitchen and make you stink to high heaven. Grease, garlic and onions, and browning beef will permeate your very pores. (Save your morning shower for after you brown the beef.) But once the roast is set to braise, the heavy odors dissipate and a rich, sexy perfume envelopes your entire home. And you. You become rich, sexy, and heady. Oh, mama mia. It doesn’t get much more carnal than braised beef. 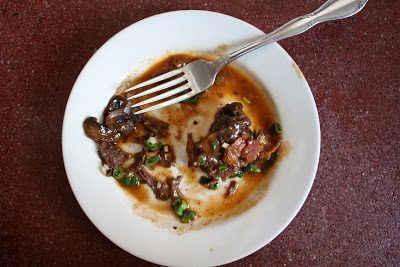 The proportions are for a large chuck roast, but even if I were to make a small one, I think I would still follow this recipe—there’d just be extra sauce, and in this case, extra sauce is a very good thing indeed.

Tip: have all your ingredients on hand and veggies chopped ahead of time. It helps things to flow.

Step One: Browning the Beef
First thing in the morning, set the thawed roast on a kitchen towel and pat dry. Take a sharp knife and trim off all the fat and shiny white membranes that cling to the sides. You’ll probably waste some meat here, but don’t worry—it’s better to waste a little in this step then to serve it and have people turn up their noses because it’s sinewy and tough.

Stir together the salt and pepper and rub it over the whole roast.

Heat two tablespoons of flavorless oil in a large pot that has high sides (for splatter reduction). Using tongs, set the meat in the pot and let it sizzle, undisturbed. Brown it on all sides, about three minutes for each side, allowing it to get a good crispy crust all over. Transfer the meat to a clean pan and tent it with foil.

Step Two: The Bacon
Slice the bacon in half lengthwise and then crosswise in little cubes. Toss it into the hot pan and stir it around till it’s crispy brown. Scoop out the bacon bits and set aside. You won’t need them again till it’s time to serve the dish.

Step Three: Build the Braising Sauce
Toss the two chopped onions, carrots, and celery into the hot bacon fat and saute for 10-12 minutes, or until slightly browned around the edges and soft. Add the minced garlic and herbs and cook for another minute or two. Stir in the tomato paste. Add the bottle of red wine and boil for about 5 minutes to reduce it a bit. Add the 2-3 cups of water and 2 cups of chicken broth and bring the sauce back up to a boil. This is your braising liquid.

Step Four: The Braise
Put the roast into a large oven-safe pot, one with a lid. (I used my crock pot since my Dutch oven was too small.) Scrape all the juices that have oozed out of the meat into the pot. Pour the braising liquid over top. The meat should be mostly, if not all the way, submerged. Clap the lid on top and bake the roast at 325 degrees for 2-4 hours, the longer the better.

Step Five: Build the Finishing Sauce
Remove the roast from the sauce, set it on a plate and tent it with foil. Pour the braising liquid through a fine mesh sieve, pressing on the solids with the back of a spoon to get out all the yummy juices. Discard the solids. Put the meat and strained liquid in a clean pot and set over low heat. Or just lid it and allow it to rest till closer to supper. Or put it in the oven to keep it warm. The important thing here is that the meat is resting in the juices so it’s getting even more moist and tender, if that’s possible. In a smaller saucepan—

Hold it! Hold it! you cry. This is TOO much work, TOO much time, too much EVERYTHING!

Well, listen. At this point it’s about 2 or 3 o’clock in the afternoon, and you haven’t done any work in the kitchen for the last four hours. But, if you are sick of the whole deal, now’s the time to stick the meat and sauce into the fridge and let it rest for a day or two. It will only improve with age, and if you really need the break, then take it. On the other hand, the house smells like heaven and you’ve lost half your body weight in drool, so you might want to muster your forces and forge ahead. Bliss is just around the corner…

Now. Where was I? Ah, yes, the small saucepan. In the small saucepan, melt the butter and then whisk in the flour. Whisk in remaining 2 cups of chicken broth and bring it to a merry boil. Season well with salt and pepper. Add it to the meat.

And there you have it. That’s the finished roast with an incredible sauce.

But of course, there are the finishing touches…

Step Six: To Serve, and the Finishing Touches
*Caramelized onion: melt a pat of butter and a little canola oil in a skillet and add the last onion. Caramelize it. (Do this in the morning while you’re browning the beef.)
*Mushrooms: saute in butter. (Can be done ahead of time. My mushrooms were frozen and then thawed.)
*Green onion: mince.
*The bacon: don’t forget it!

Place the roast on a cutting board and cut across the grain to make 1/4 to ½-inch thick slices. Place the slices in a serving bowl, ladle some sauce over top and sprinkle with bacon, minced green onions, caramelized onions, and sauteed mushrooms.

Leftover roast with accompanying sauce can be frozen for a future feast.