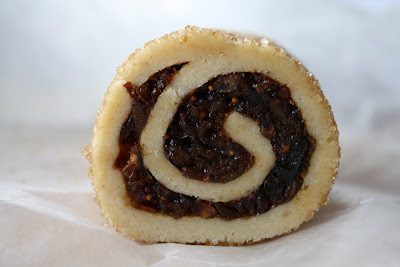 Eleven days to Christmas and still no snow and no tree.

Both absences are causing my second daughter much anxiety. She stands in front of the door, gazing forlornly out at our back yard that has turned into a barren wasteland, plaintively asking, “How much longer till winter gets here?”

She’s taken to hounding her papa to go up to the attic and get down the “Mary-And-Joseph.” And I mean, hounds him. Last night while we were in the middle of the get-supper-on-the-table rush, she asked him five times in three minutes and then, when we all sat down to eat, she chirruped hopefully, “Did you get the Mary-And-Joseph?” Mr. Handsome hit the ceiling.

And so it goes. Christmas gets fussed and pushed into being, and holiness and goodwill abound in these drawn-upon, kicked in, and nicked-up walls. Ho-ho-ho.

I did put up a 5-foot strand of white Christmas lights atop the hutch. And I have been making cookies. That’s gotta count for something.

Cookie baking is a lot of work! Saying that makes me feel like I’m exiting my prime. ‘Cause back when I was in high school, I bounced around my mom’s kitchen turning out eighteen different kinds of sweetness and thinking nothing of it.

Nowadays, I do everything in stages. One day I mix up some dough, the next day I bake. After sending the cookies down cellar for a several-day-long siesta in the freezer, I finally muster enough energy to decorate. It’s a process. (Though that’s all theoretical optimism. I’m assuming I’ll eventually get all the cookies iced. As of this afternoon, the icing is in the fridge and the cookies in the freezer, but they haven’t been married together yet. And Guess Who has been constantly reminding me that cookies need to be decorated and she wants to do it NOW.)

Today, in stages (of course), I’m baking the cranberry-white chocolate cookies. I haven’t made the lemon drizzle for those yet, but it will happen. Later.

I have other kinds of cookies to make (and other kinds I’ve already made but haven’t told you about), but the unspeakable has happened: I’m nearly out of butter. Only five sticks of butter in the fridge and I lose my ability to function. It’s true!

Since I can’t bake (and since I can decorate but don’t want to), I’ll tell you about my new cookie love: these fig-date-anise pinwheels.

I don’t think I’ve ever made pinwheel cookies before, but these little buggers leaped up out of the pages of an ancient Gourmet magazine and onto my cookie trays before I even knew what was happening.

Well, not quite that fast. It all happened in stages, of course. 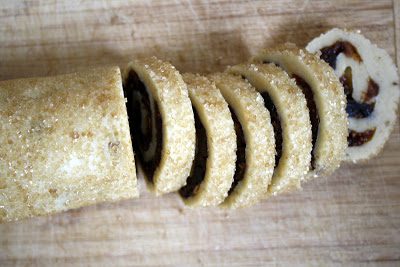 First I pondered the idea. Then I studied the recipe. Later I checked out my cupboards to make sure that the figs of yesteryear were still edible. (They were.) Eventually I got out my food processor to make the filling, but I ran out of dates (later I found a whole huge honkin’ bag in one of my two freezers) and had to sub in a couple prunes, and when I went to start in on the dough, my whole project came to a screeching halt because I had no anise seed in the house.

(Except I know I have anise seed. I bought it once upon a day. I bagged it up and stuck it— somewhere where I’d be sure to never find it again.)

And I was just starting to get into the swing of things, too. What a pity. 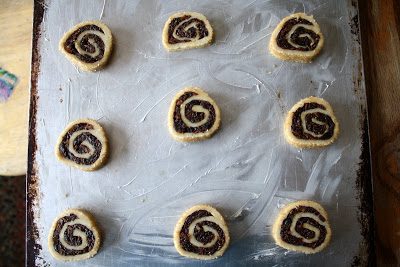 So the filling went in the fridge and I went shopping. But the two stores closest to my house didn’t sell anise seed. (What is wrong with them? Does nobody else use anise seed?) I returned home and called up a higher-end store (they had it!) and sent my husband out on a quest for the holy anise seed.

See, like I said, I bake in stages. You didn’t realize just how many stages were involved when I said that, did you?

The next day I mixed up the dough and set it in the fridge to chill. Several hours later (while visiting with a friend—the same one who was present for the making of the Christmas Nippies), I rolled out the dough, spread the filling, rolled it back up, and rolled the logs in sugar before wrapping them up tight in wax paper and sticking them back in the fridge.

The final final stage happened a day (or two?) later when I got around to slicing and baking the cookies. And falling in love.

Because these cookies are so worth all those hoops I had to jump through. All the waiting and phone calls and deep freezer searches—in hindsight, they were nothing.

These cookies are crunchy with thick sugar and fig seeds, pungent with anise, and tender with butter and cream cheese. Without being overly cloying or sweet (like so many goodies at this time of year), they are decadent and rich, musky and sophisticated, and totally grown-up.

If I was a really good writer and wanted to take the time to prove it, I would now go back and edit this whole piece, adding vignettes and analogies in order to draw a pithy correlation between the stages involved in growing older and making cookies. But that would mean that this blog post would have to be written in—oh help!—stages, and, well, if you give a woman a recipe, she’d rather eat it and then quick tell other people about it than sit around all day and write about it.

Though on second thought, that would maybe be more fun than decorating Christmas cookies with the kids…. 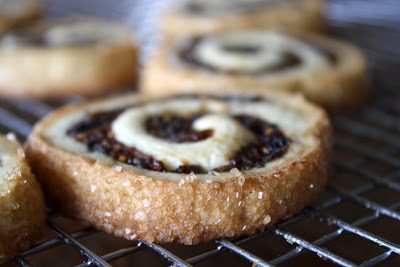 To grind the anise seed, use a coffee/spice grinder.

Puree the dried fruit with the water and sugar. Try to get the mixture fairly smooth, though a little chunkiness is fine. Chill the filling in the refrigerator for several hours (or days, as the case may be) until you are ready to shape the cookies.

Cream together the butter, cream cheese, and white sugar. Beat in the egg yolk and vanilla. In a separate bowl, stir together the flour, ground anise, baking powder and soda, and the salt. Add the dry ingredients to the butter mixture and beat until combined.

Divide the dough into two halves, roughly press each piece into a rectangle, wrap them in plastic, and set them in the refrigerator to chill for at least one hour.

To shape:
Remove one of the rectangles from the refrigerator, set it between two pieces of wax paper, and roll it out into a 7 x 9-inch rectangle, about 1/3-inch thick. Spread half of the fruit mixture over the piece of dough leaving a quarter inch border around the edges. Starting from the long side, roll the dough up, using the wax paper to get it going and then pulling the wax paper off as you go. Put the Demerara sugar into a sided pan and roll the log in the sugar, making sure that the whole thing gets well-covered with the crunchy sweetness. Wrap the log in wax paper and chill it in the fridge for at least four more hours.

Repeat with the remaining filling and rectangle of dough.

To bake:
Cut the logs into 1/3-inch-thick slices and set them on lightly buttered cookie sheets. Bake the cookies at 350 degrees for 12-16 minutes, or until lightly browned. Allow them to rest on the hot cookie sheets for a couple extra minutes to set up before transferring them to cooling racks.