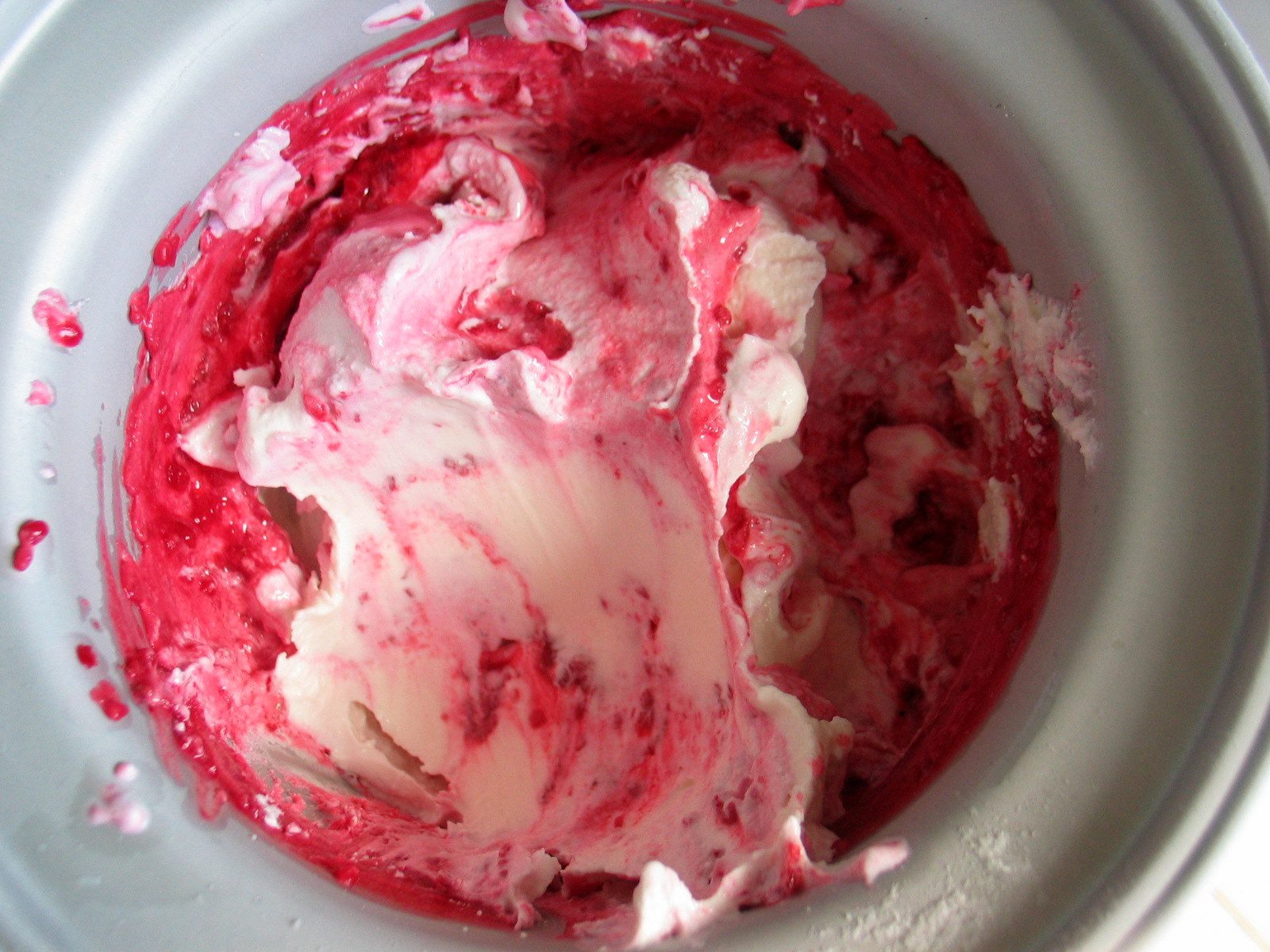 The morning after the refrigerator debacle, I was sitting at my desk clicking through my morning tour of favorite blogs when Julie’s post caught my eye. She was writing mostly about apple-red raspberry pie, but it wasn’t the pie that got me, it was the ball of red raspberry ice cream sitting alongside the pie.

As I pondered the recipe, I remembered the couple boxes of mushy, juicy red raspberries that I had hurriedly stuffed into one of the basement freezers in midst of the previous evening’s frenzy. That did it, I decided. Red raspberry ice cream was the way to go. 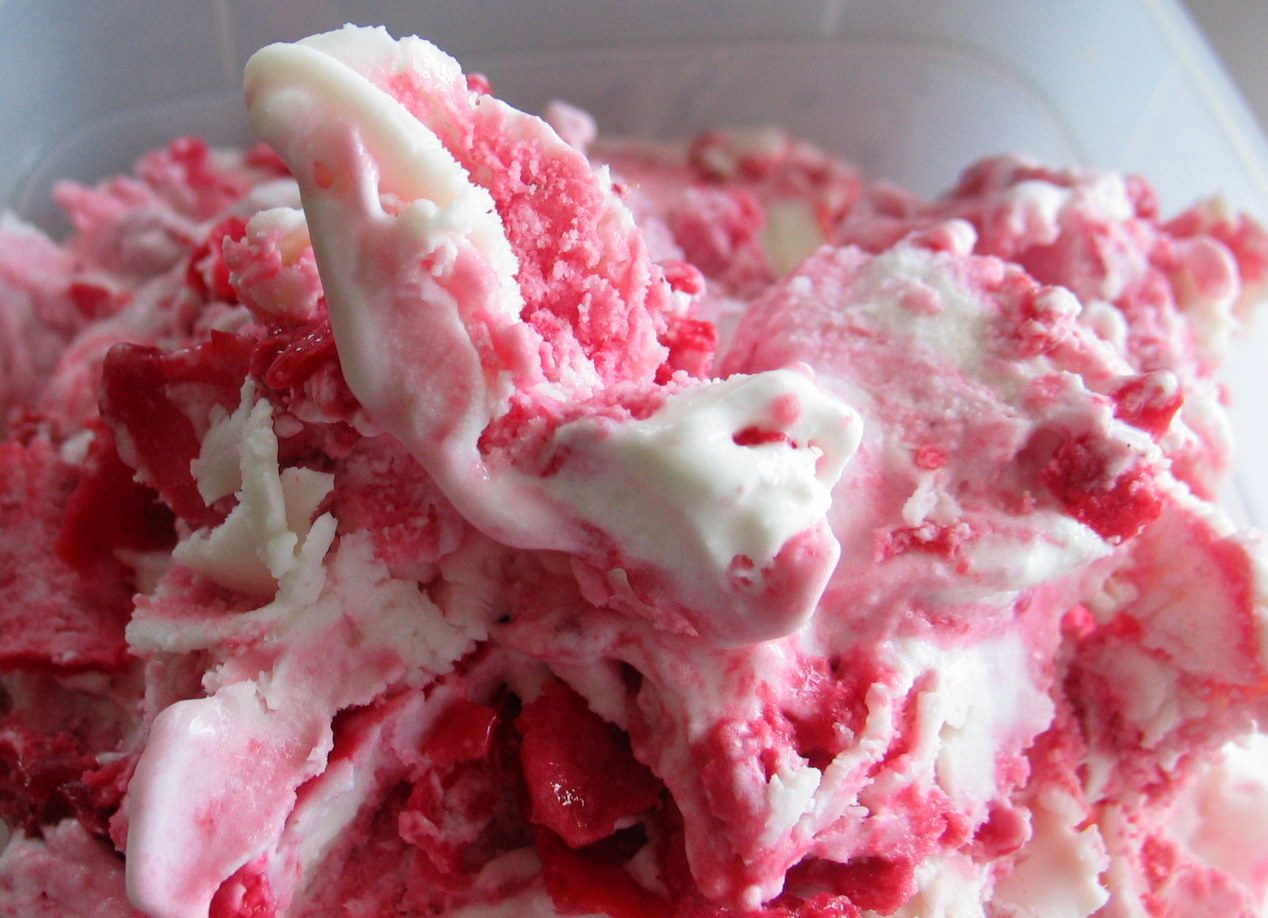 I did not grow up with red raspberries. In fact, my mother was very outspoken in her distaste for the fruit. “They taste like Pepto-Bismol,” she’d say, screwing up her nose and smacking her lips, pretending to taste the foul medicine. “Now black raspberries,” a beatific smile relaxing her face, “they are something else. Black raspberries are far superior.”

Black raspberries are pretty incredible, I’ll admit, but over the years I’ve grown to love the red variety, so much so, in fact, that given a choice between red or black, I’m not sure which I’d chose. I kind of have a hunch I’d go with the red because they’re so … red. And because they’re tart and they go well with so many foods, adding an often much-needed color/flavor boost.

(I think my mother’s opinions regarding the red raspberry have softened somewhat. While she and my father still don’t have any of the bushes on their property, she did fall head over heels in love with the red raspberry-rhubarb pie. We spent phone conversations discussing that pie.) 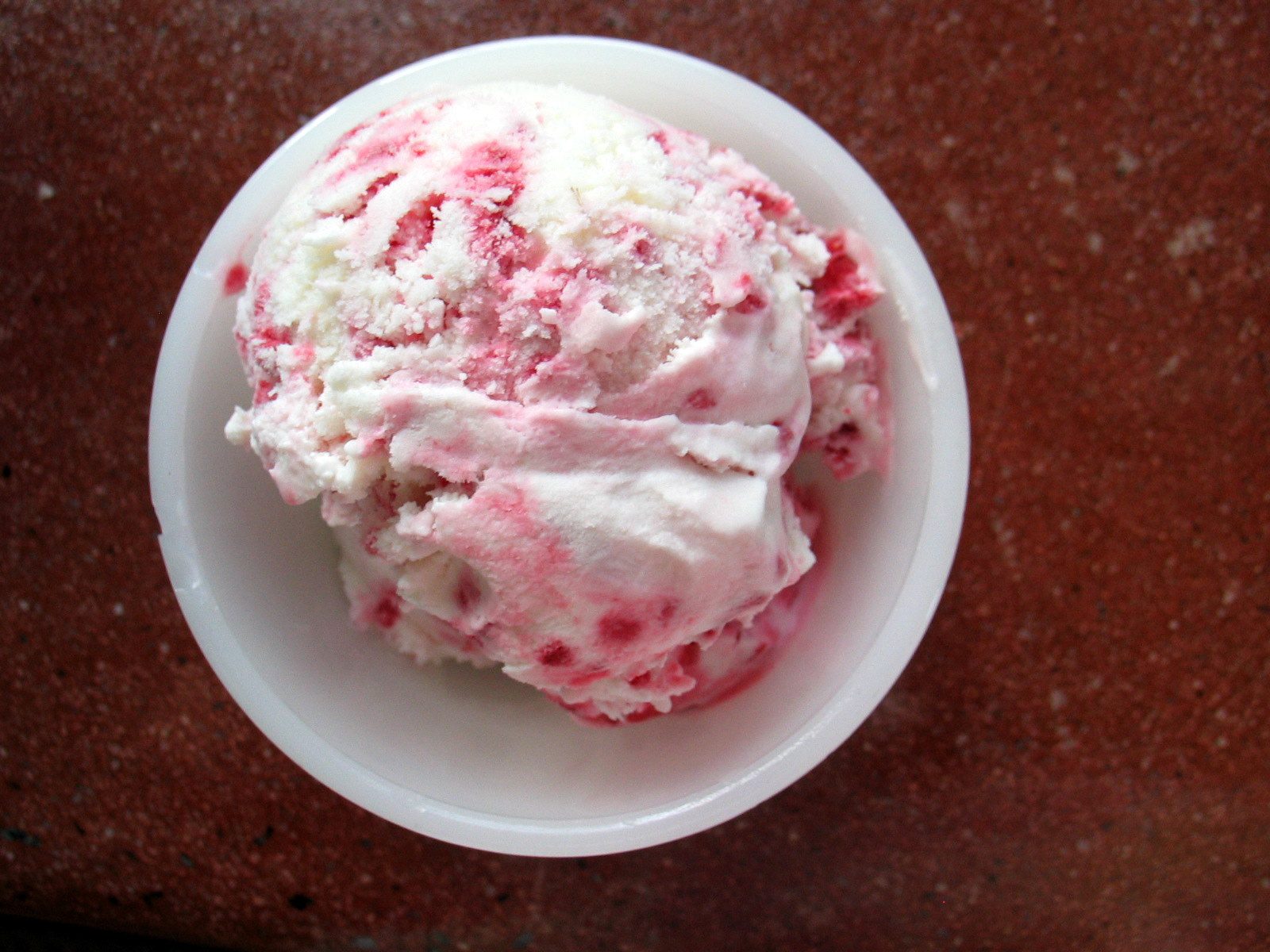 I’ve made different red raspberry ice creams before and they always involved pureeing and then straining the fruit to remove the seeds. This ice cream doesn’t mess around with any such nonsense, and because I happen to like the seeds, this appears to be the only way to go. 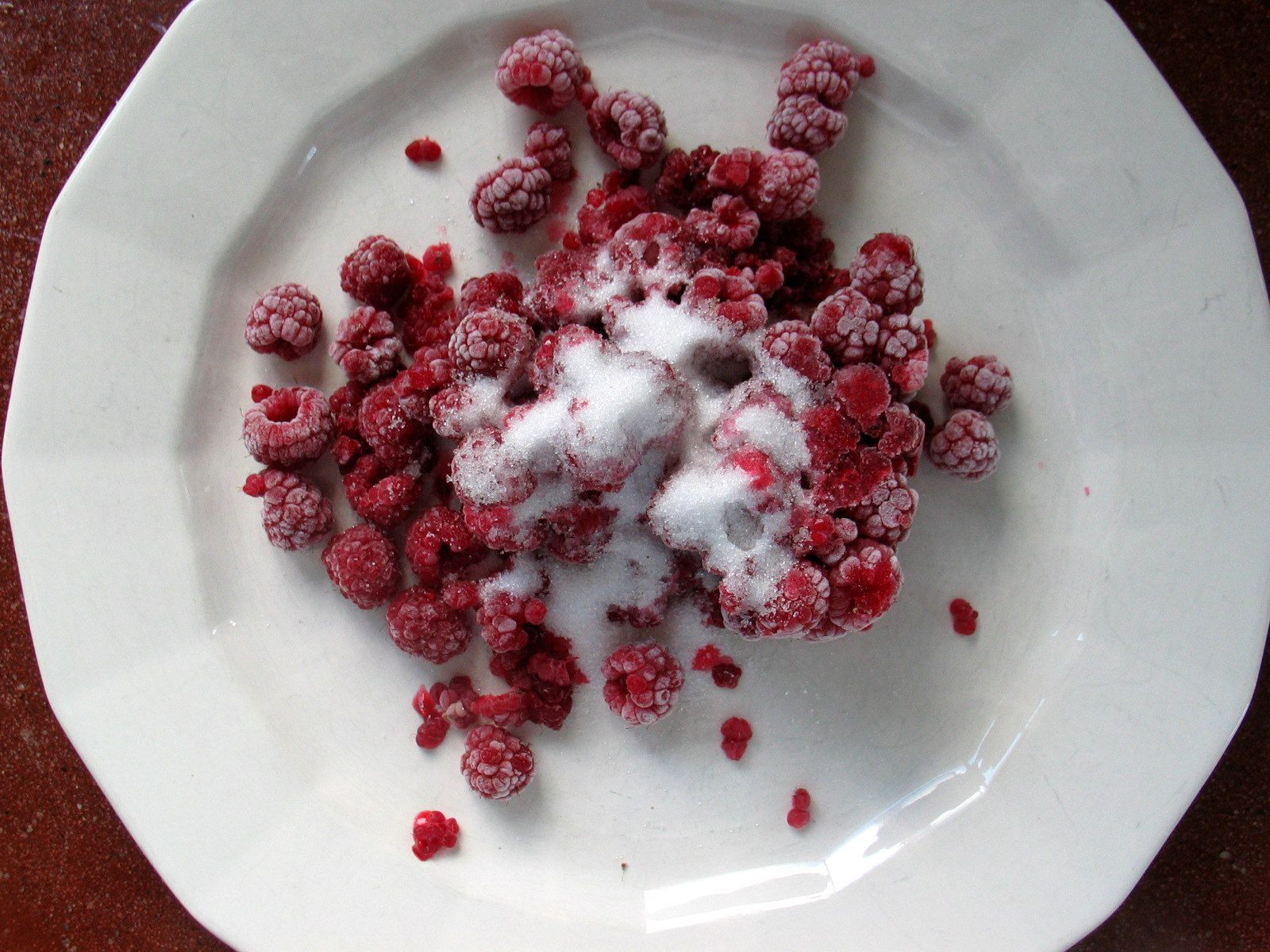 If you add the fruit earlier in the mixing process, the ice cream will blush pink all over. I opted to go the swirl route, waiting till the ice cream was as stiff as I could get it before spooning in the crushed berries. (Actually, I didn’t wait for the ice cream; I was running around upstairs overseeing the kids’ room clean-up tasks, aware out of the corner of my mind that the machine was grinding away, probably for too long. It worked out in the end, though. The rooms got cleaned and I got my ice cream.) As soon as all the fruit had been scraped in, I shut off the machine and boxed up the ice cream. 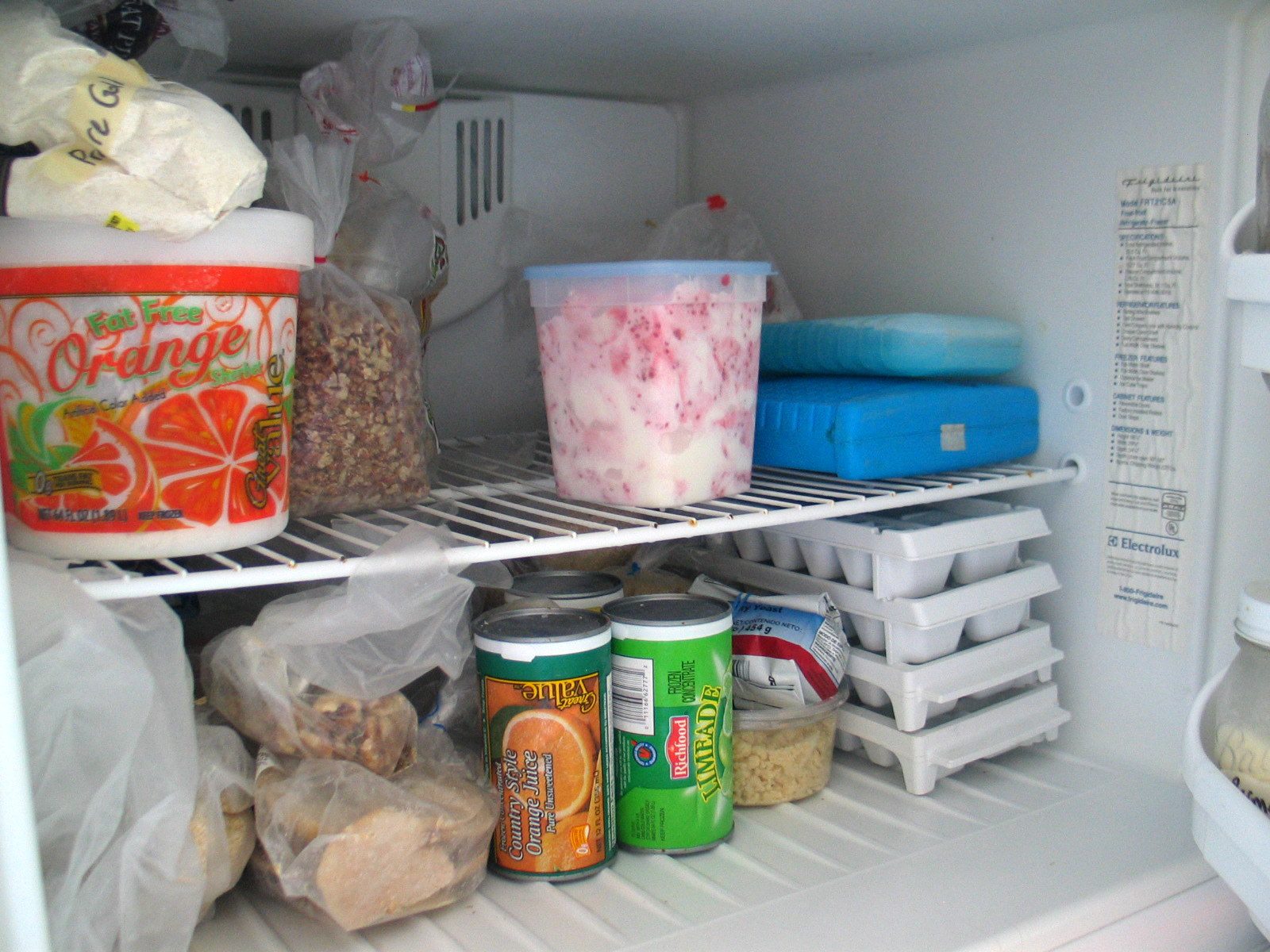 I had some leftover peach cornmeal cobbler on hand (yes, I’ve made more and another one is on the kitchen line-up for today) and I kept fixing little bowls of warmed-up cobbler to eat with mini scoops of red raspberry ice cream. I think I did that a total of three times. It would’ve been four, but when I got home from my church council meeting the cobbler pan was shiny clean. I may have wailed. After pacing between cupboard and fridge for a good while, I finally settled on a plate of cheesy tortilla chips and salsa. The chips were good, but they weren’t cobbler and ice cream. 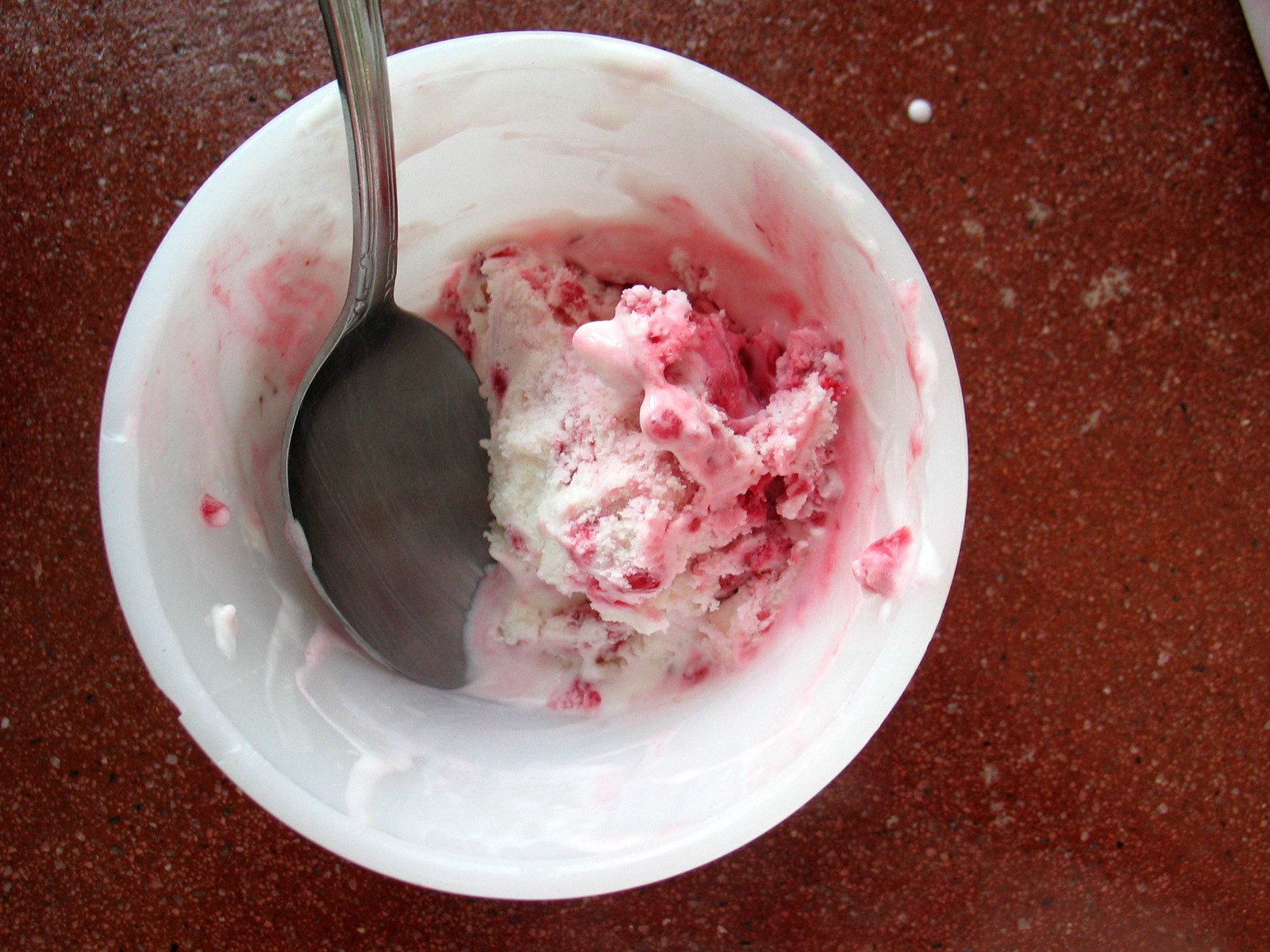 Red Raspberry Ice Cream
From Julie over at Dinner With Julie, not really even adapted

This is one of those ice creams that is best served up straight away, but it’s good after a rest in the freezer, too.

Stir together the cream, half-and-half, milk, ½ cup of sugar, and the vanilla. Freeze in your ice cream maker.

While the ice cream is churning, mash together the red raspberries and 2 tablespoons of sugar with a fork.

Spoon the fruit into the machine in the last minute of churning, earlier if you want the ice cream to be pink all over.