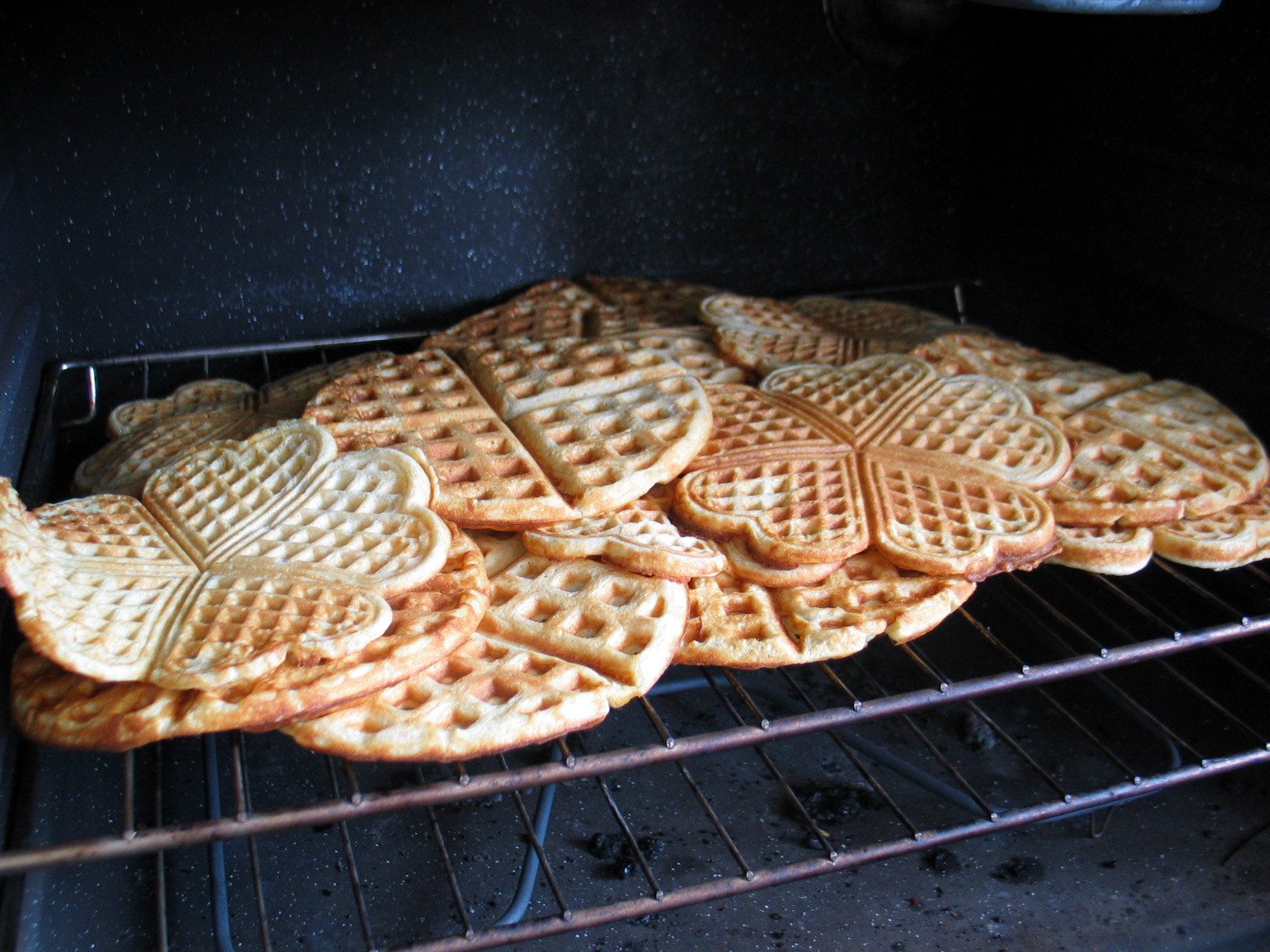 It began last Sunday (it might appear to be kind of early to declare it a tradition, but you gotta trust me on this one—it’s a tradition fair and square, hallelujah and amen) when we swung by our friends’ house on the way from church to drop off their weekly egg order. The family—both parents and two of the nicest teenagers I know—was outside at the picnic table eating their Sunday lunch of waffles.

They hollered for us to join them, the father beckoning us over with huge sweeps of his arm, calling to us in his thick German accent, but we declined. We were eager to get home to our work-free afternoon, and besides, I’m cautious about unloading six hungry appetites into unsuspecting laps as it could do a person in. It does me in and I’m not unsuspecting.

Almost immediately, the entire family vacated the table and surrounded the van. They hung in the windows and opened the doors, the better to chat with all of us. When I next turned around, the Two Nicest Teenagers In The World were handing out napkins and wedges of Nutella-smeared waffle to my kids. When we finally drove away, the whole car smelled of melting chocolate and buttery waffles.

I spied an opportunity to teach a lesson on manners and promptly seized on it. “Kids,” I yelled, over their backseat ruckus, “Kids! Did you notice what they did back there?”

“Yeah! They gave us waffles,” they shouted back gleefully.

“It was so kind,” Miss Beccaboo added in a sugary-sweet voice. (These days, she’s big on the word “kind.”)

“Exactly,” I said, warming to my speech. “They not only offered us food, they came over to the car to give us food and talk to us. That’s what you do to make people feel welcome, you go out of your way. Now remember that.”

“Why don’t you make us waffles for lunch?” Yo-Yo asked as soon as I paused to draw breath.

The car rocked with shouts of Yes! Let’s! and Please, Mama, Pleeeease!

I hesitated. Sunday noon isn’t the best time to make a meal that takes any amount of time, and it’s usually when I rid the fridge of the week’s leftovers, but as our church lets out earlier in summer, the kids (and parents) weren’t quite at The Point of Melt Down, and the leftovers would still be there on Monday… But then there’s the issue of serving my kids a meal consisting of just starch and sugar, completely devoid of greens. I don’t usually do that. But hey, we had a freezer full of fruit (when are we going to use it up anyway?) and I could make the waffles whole grain—

“Alright,” I said, and the car rocked harder. 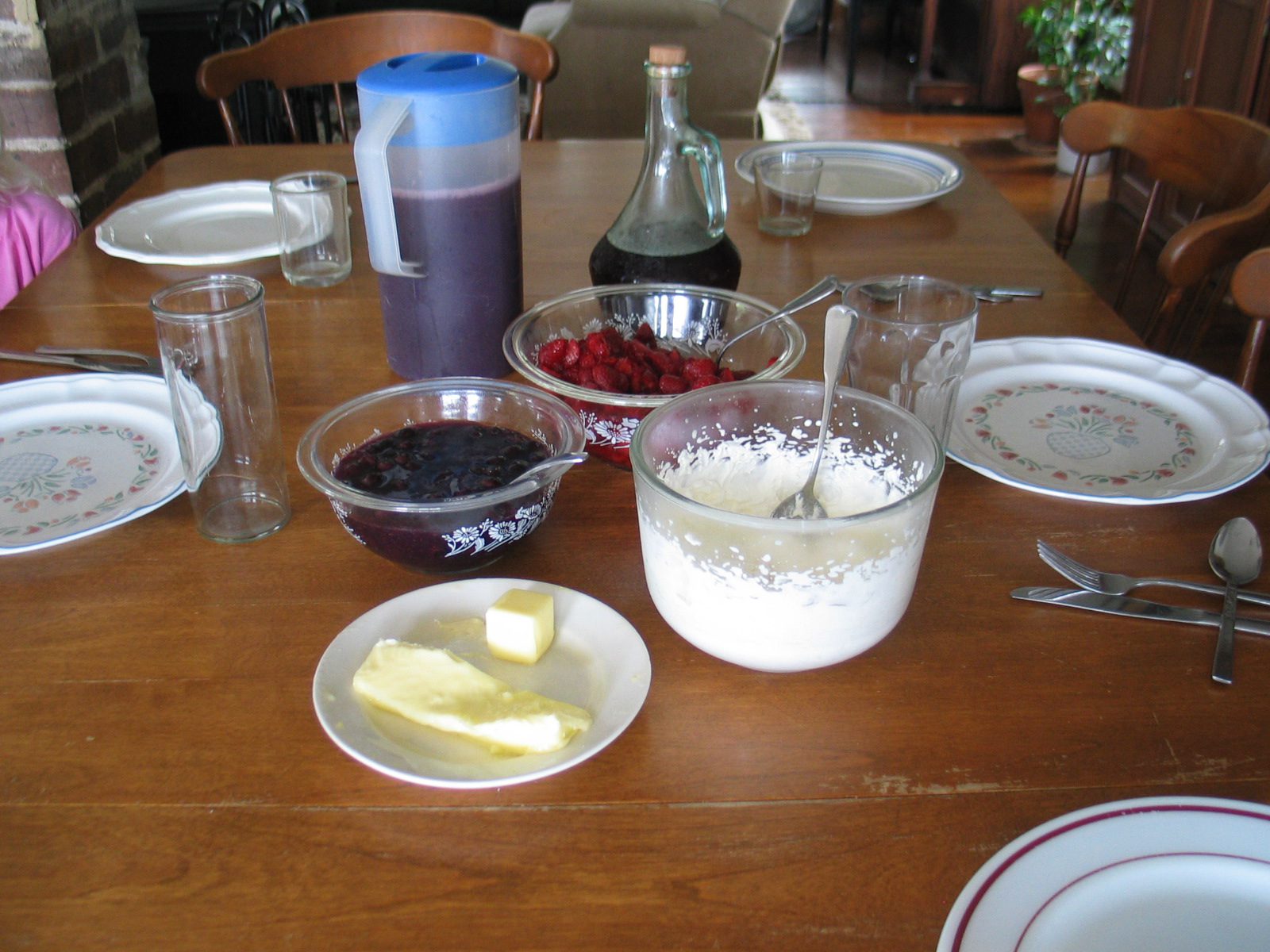 The meal was a roaring success (though I learned that a double batch of waffles is not enough) and everyone left the table supremely happy. We all agreed Sunday waffles would be our new family tradition.

This Sunday I mixed up the dry ingredients (a triple batch) before church. Once home, I bustled around the kitchen cooking waffles, whipping cream, thawing strawberries, and making a blueberry syrup. Sweetsie was so excited about the upcoming feast that she could barely contain herself. She was everywhere at once, being more helpful than was necessary, and when I tripped over her one time too many and banished her from the kitchen, she just giggled. 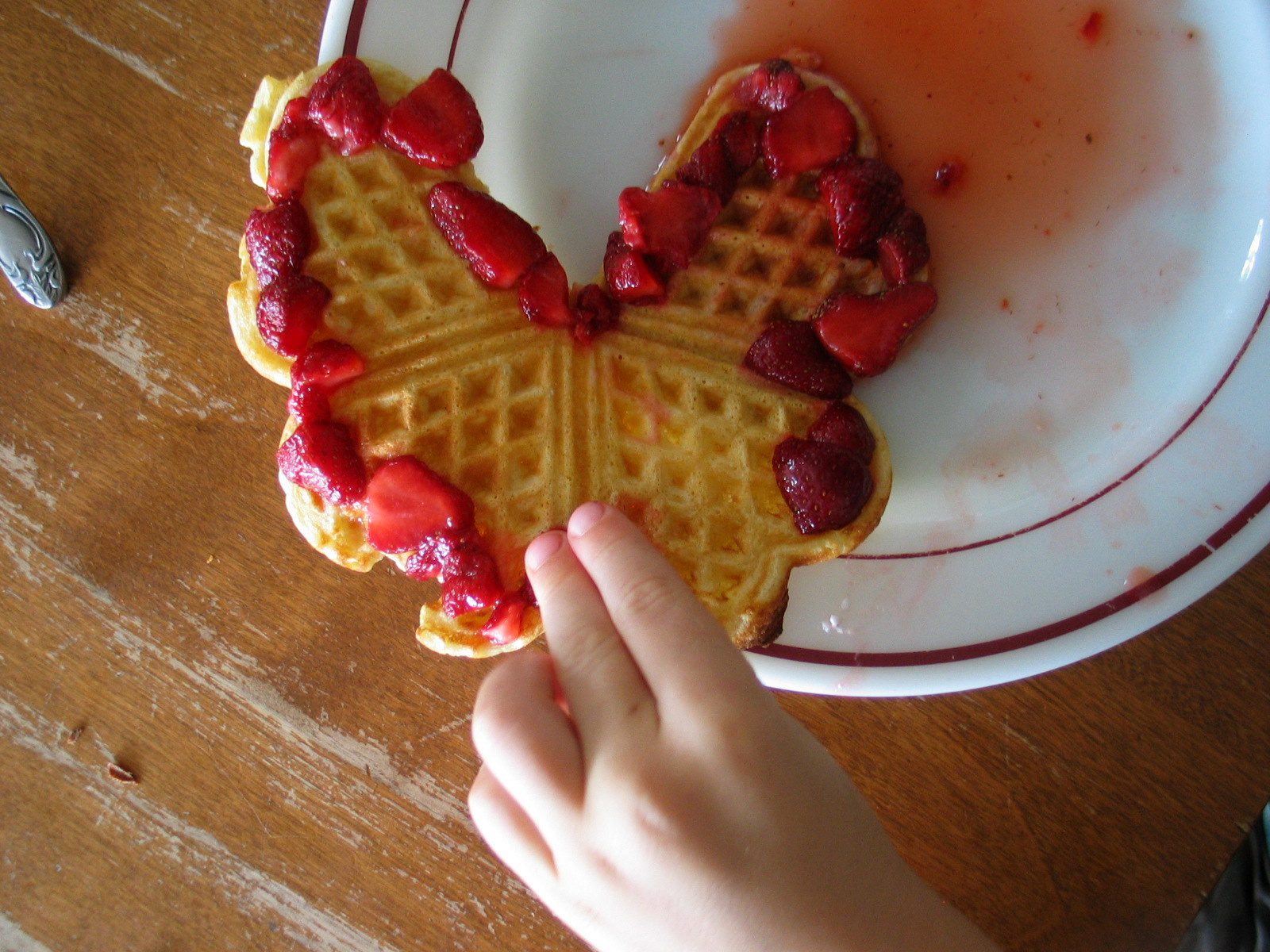 The kids take the adornment of their waffles very seriously. They can eat all the fruit they want, but they are only permitted one scoop of whipped cream (I’m exempt from that rule). Yo-Yo and Sweetsie eat theirs straight up, but Nickel makes heart-shaped waffle sandwiches stuffed with cream and strawberries and Miss Beccaboo uses hers as icing. 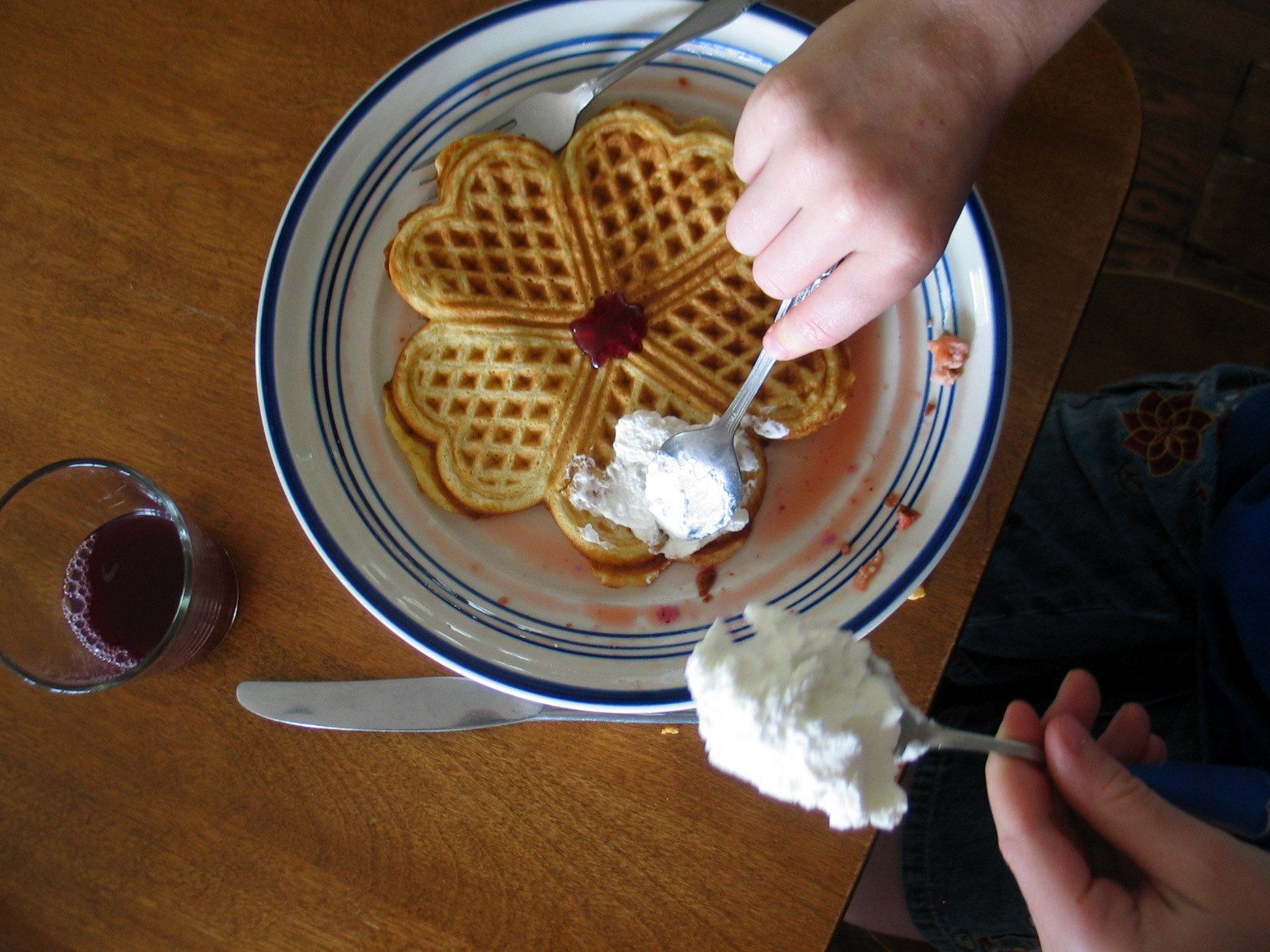 When lunch was over, there was only one waffle left. Sweetsie so stuffed herself that she collapsed on the floor in a heap, groaning.

Next Sunday I just might break out the jar of Nutella that they don’t know I have. They’ll go wild.

The absence of sugar is not a typo.

Preheat your waffle maker and cook according to the waffle maker’s instructions. (I oil the waffle maker lightly and only once in a while, and I probably wouldn’t even need to do that as it never seems to have any trouble sticking.)

For waffle variety: this is another great waffle recipe. It can be almost completely assembled the night before and is 100-percent whole grain and sensationally delicious.