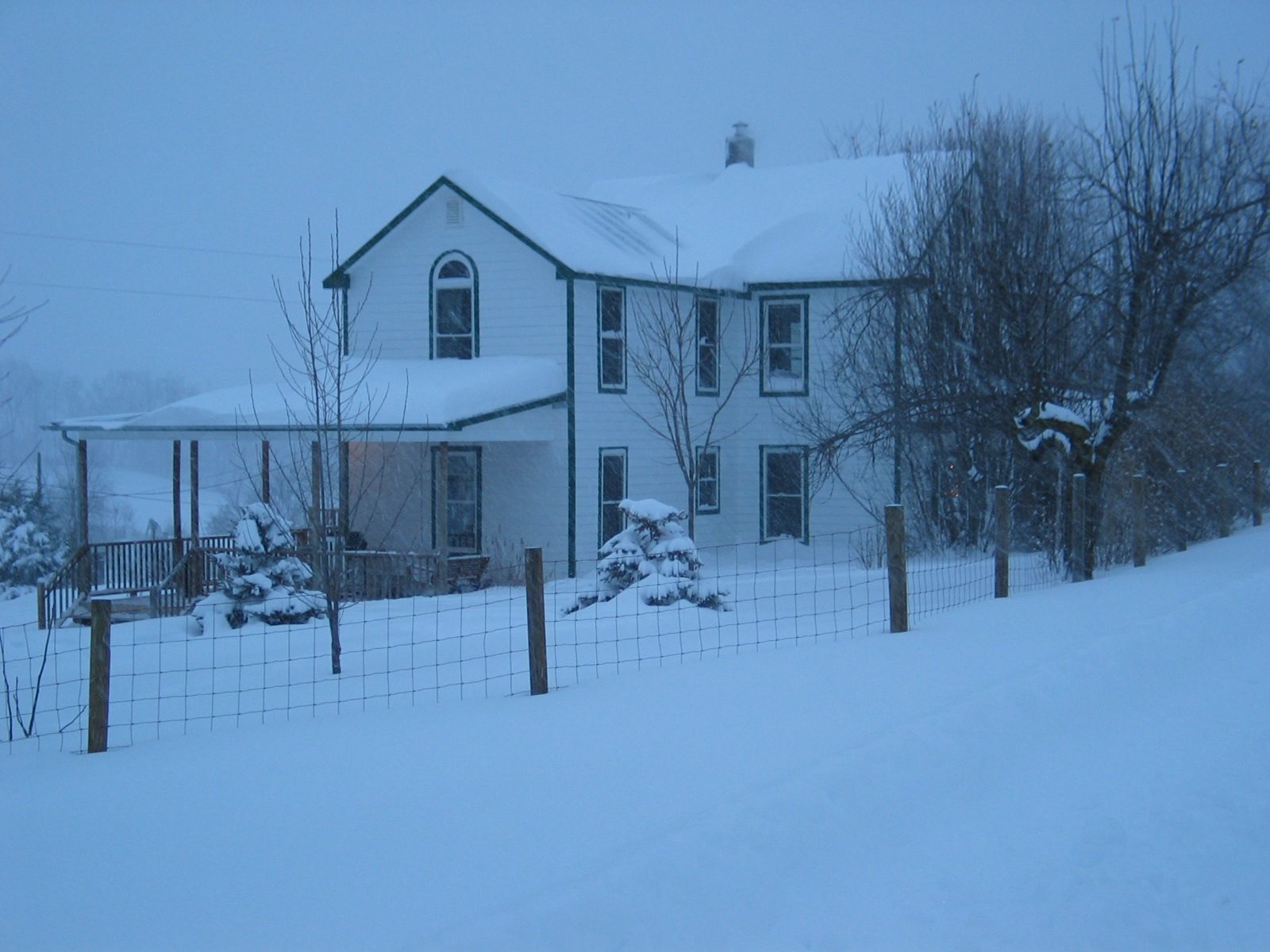 The following was written on Saturday, December 19.

The snow has been coming down for almost twenty-four hours and we still have power. I’m expecting it to go out any minute—our power goes off at the drop of the hat, it seems, and I can’t quite believe that it will stay on during the storm of the century. I’m hoping against hope that it stays on.

In case you can’t tell, I get really rattled when the power goes off. We are so enmeshed in the grid that I have no idea how to cope once we get booted off.

Mr. Handsome gets totally irritated at my royally worried uptightness about having power. “When we lived in Nicaragua, the power went off all the time!” he explodes. “Yes,” I say, equally exasperated, “but we were prepared for it then. There’s no back-up system here.” (I can’t believe I have to spell out this elementary stuff to him.)

Here’s what I lose when the power goes off: the stove (no coffee, baked creations, hot meals), water (dirty toilet, dirty dishes, dirty house, dirty hands, hair, faces, feet, etc), the vacuum, lights (pretty Christmas twinkly atmospheric lights, cozy bedside lamps), the ceiling fan (which circulates the heat from the wood stove throughout the house), the ability to open the refrigerator (there goes milk, butter, eggs, and cheese), my hair straightener (not like I’m going anywhere, but still), the computer, the internet, the phone, ability to recharge the camera or grind coffee beans (which I can’t use anyway because I can’t make coffee), the washing machine, the microwave, the mixer, the yogurt maker, the radio, and so on. My hands feel so tied by all I can’t do that I have to think twice—can I complete this task without electricity?—before I do simple stuff like put the laundry away.

That’s enough of my little sob story, especially considering that nothing has even happened so I have no reason to be sobbing just yet. It’s actually been quite idyllic: candles, cookies, Christmas music, The Best Christmas Pageant Ever, hot chocolate laced with Baileys at 9:30 in the morning, a stuffed turkey in the oven, gooey lemon bars, a blazing fire in the wood stove, scorched cashew brittle, the works.

The snow started at four o’clock Friday afternoon, exactly when accuweather predicted it would. Mr. Handsome came home with two brand-spanking-new, bright red, 32-gallon trash buckets that he carried down to the basement and then filled with water. He strung some bailing twine between the stair railings and a ceiling hook in anticipation of lots of sopping wet snow clothes. He brought in firewood and turned the van around so it faced the road. I vacuumed the floors, wiped down the stairs, and cooked a pot of red beans. After supper the kids got baths and hair washes and by seven o’clock they were in their pajamas and were doing their evening ritual of bouncing off the walls. (I hate that evening ritual, but it appears they were born with it hardwired into them.)

I assessed the situation and then did something totally uncharacteristic: I told them to put on their snow clothes, and—this is where I shocked everyone, myself included—I got dressed to go outside too. My plan was to walk the half mile to my brother’s house where my parents and other brother were visiting and pummel their door with snowballs. The kids were game. We went, attacked, sang “Happy Birthday” (to my mother) and “We Wish You A Merry Christmas,” and returned home. Of course it didn’t go as smoothly as I make it sound (bitter cold, sleeting snow, tired and grumpy kids), but it was about as close to perfect (familial togetherness in a silent snowy country wonderland) as we get around here.

This morning we were all up bright and early (make that “dark and early”), oohing and aahing at the mountains of snow that had magically transformed our world overnight. I told the Yo-Yo and Miss Beccaboo that the world was theirs to explore, including the roads. They were overjoyed. (I had to backtrack a bit when I saw they were preparing to run down the road by all the neighbors’ houses and it wasn’t even 7 o’clock yet.)

Now Mr. Handsome was another sort of problem all together. He had it in his head that he was going to butcher chickens today, no matter what, and, strangely enough, eighteen inches of snow were not a deterrent. But I am more powerful than any snow storm because I told him, in no uncertain terms, that he was mad to think he could butcher in a snowstorm and that furthermore, I couldn’t—and wouldn’t—support his wacko behavior. That did the trick; he stopped talking chickens and went out to work in his barn.

And now the following, written on Tuesday, December 22.

We had planned to celebrate my mother’s birthday with dinner at my brother’s house. I was in charge of the turkey, stuffing, gravy, and cookies.

That means that we had to get ourselves and the kids bundled up for the journey, and then carry the turkey, stuffing, gravy, and cookies the snowy (two feet of it, mind you!) half mile to my brother’s house. It was a logistical challenge, but nothing a man in coveralls with a tool belt ‘round the waist couldn’t fix. (Lest you become confused, in the following photo he doesn’t have the tool belt on just yet.) 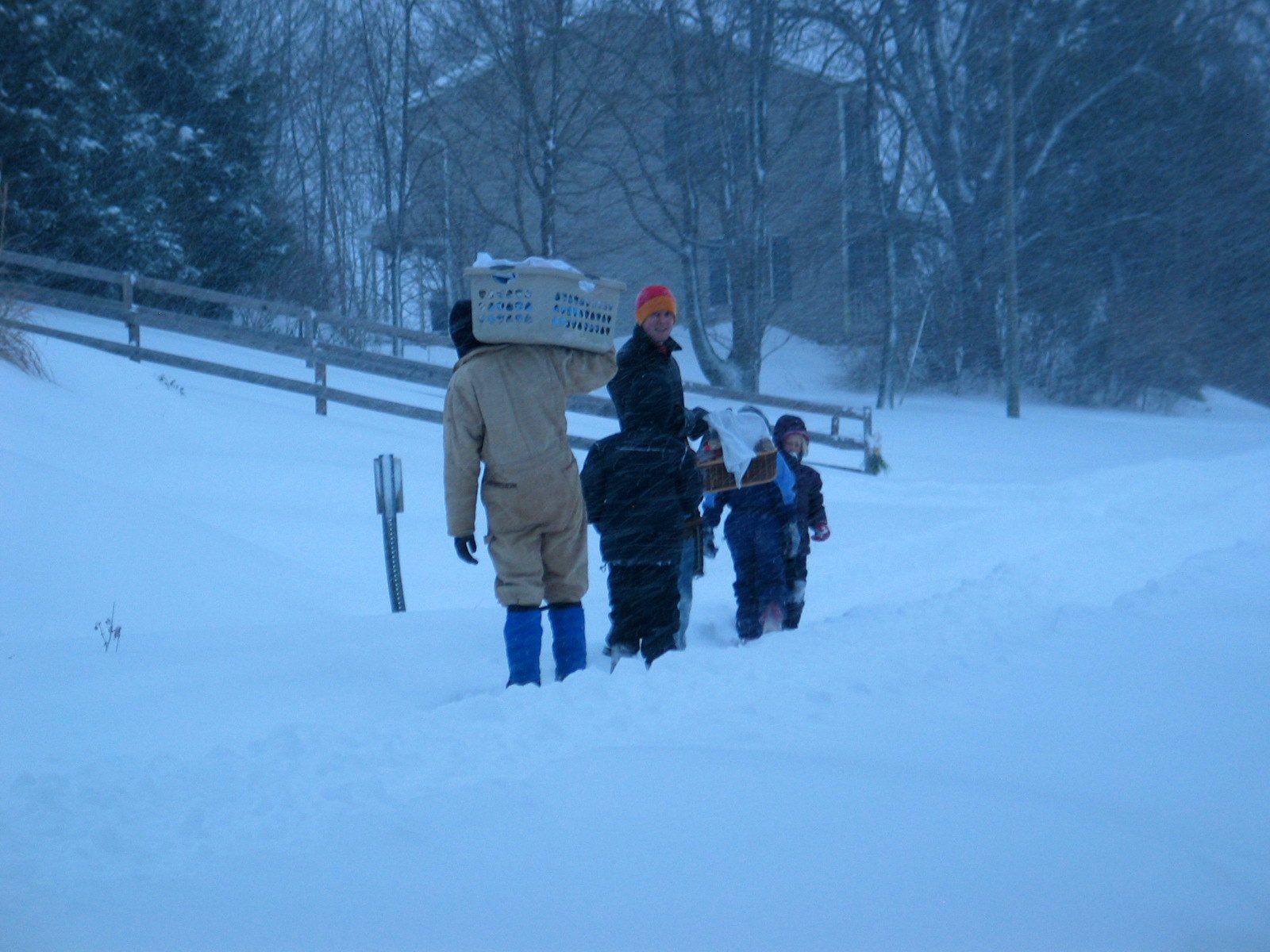 We had just finished reading The Best Christmas Pageant Ever and the whole way there the phrase “bearing ham” kept running through my mind, though it was turkey we were bearing, not ham.

The Baby Nickel had trouble keeping up. See him back there by the fence posts? 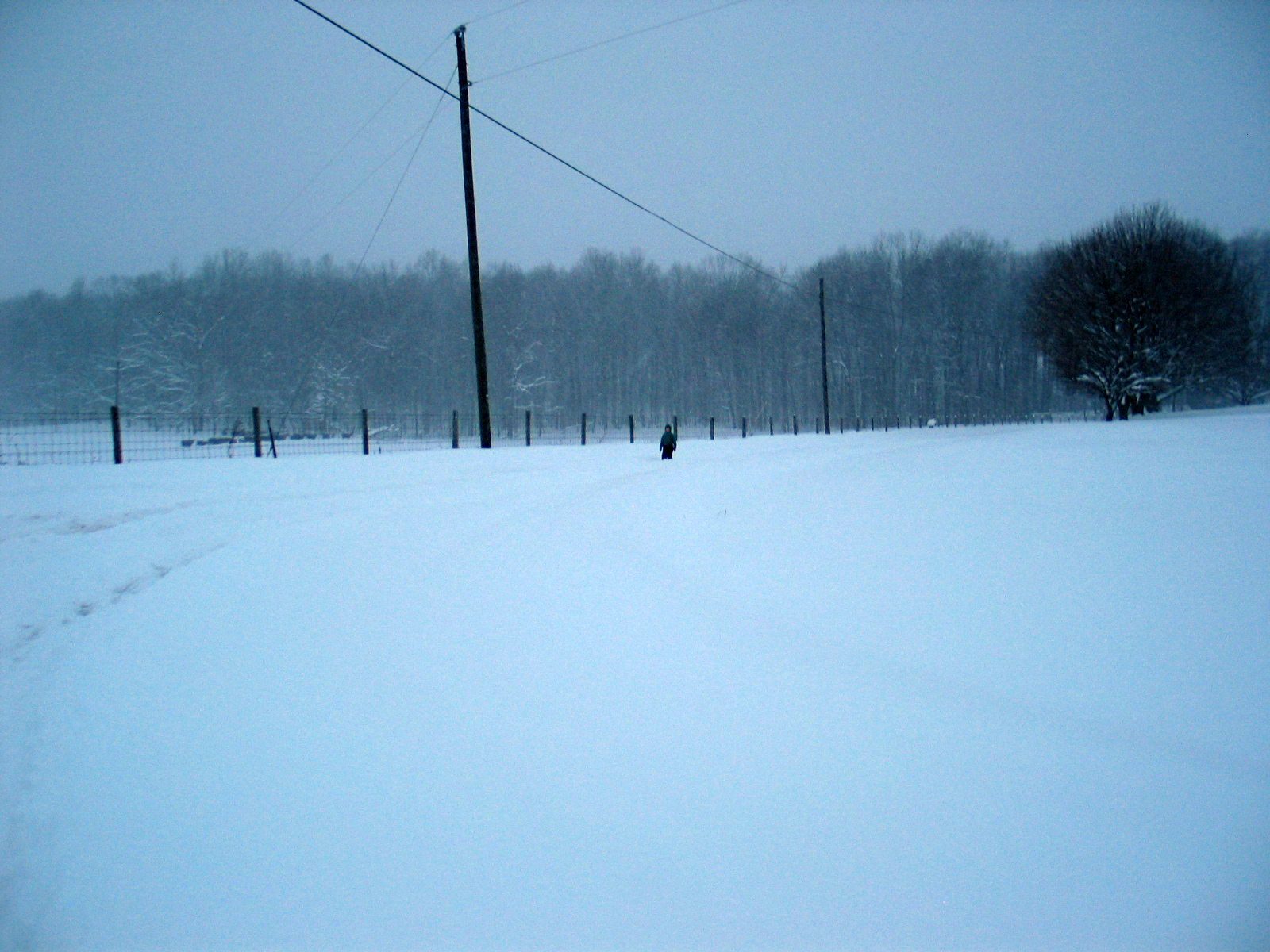 So my Tiny-Little Brother got him to sit on the shovel scooper thing and gave him a zippy ride down the hill. 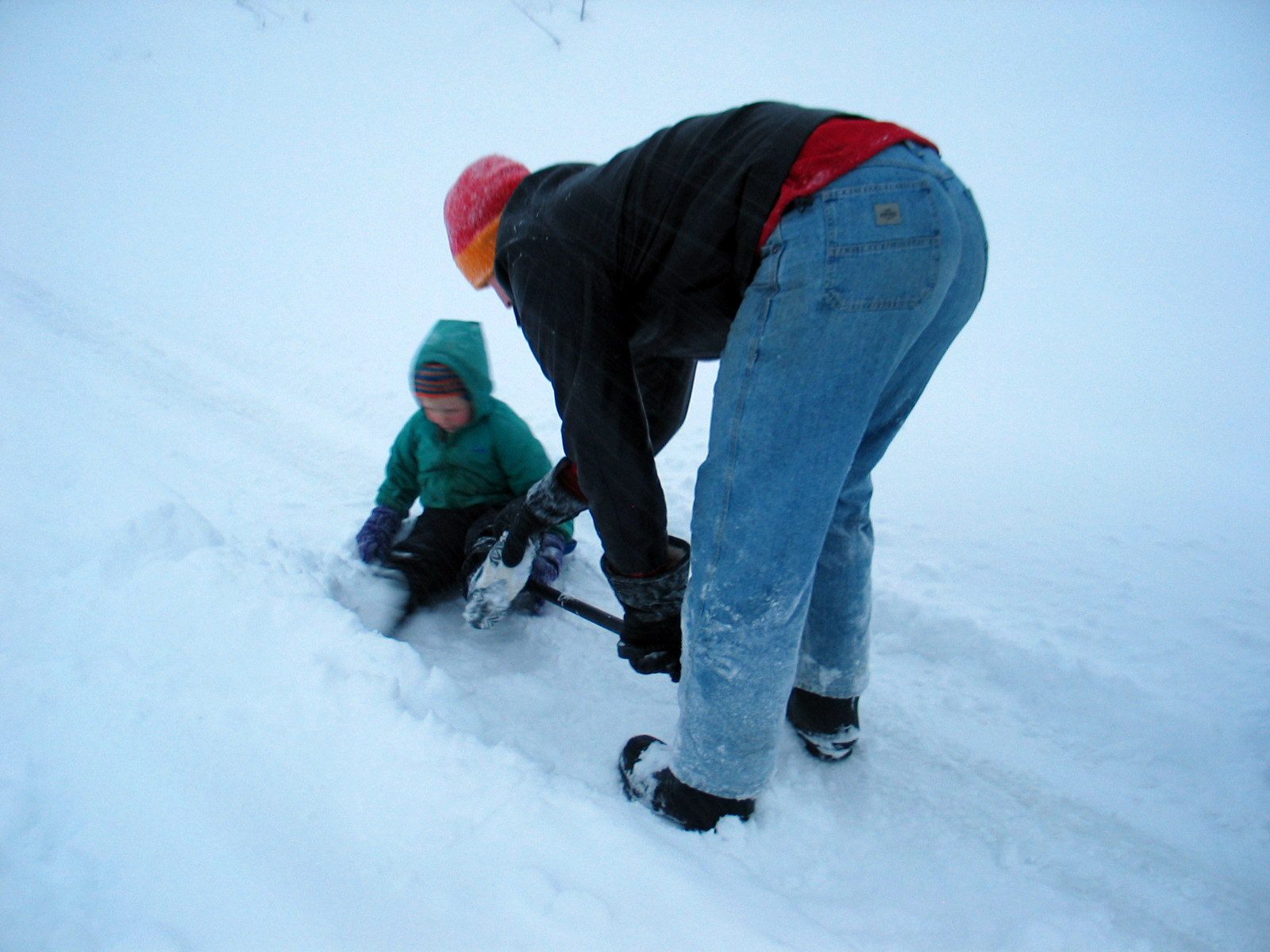 The dinner was delicious, the house was cozy, my mother tooted her horn… 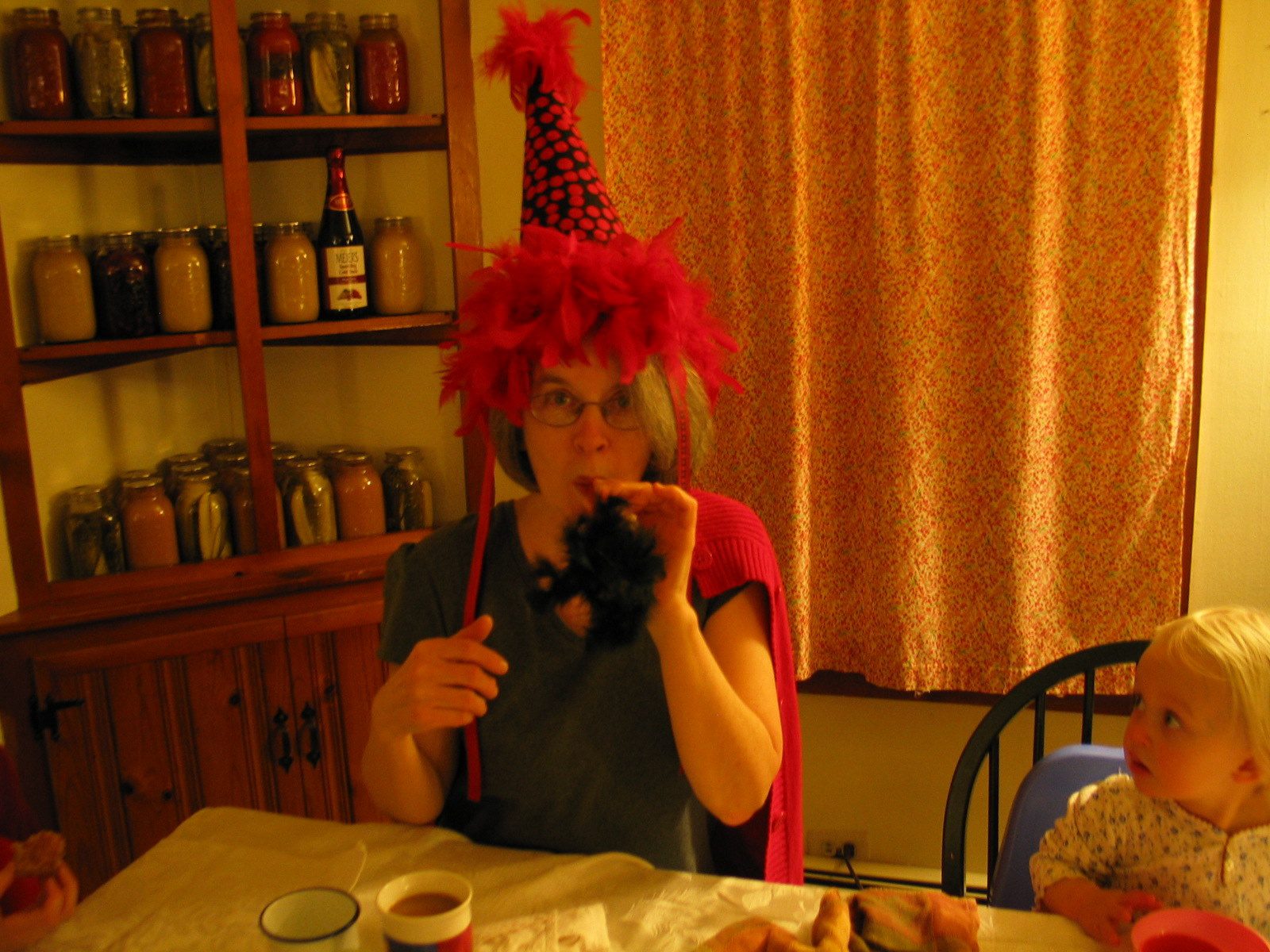 …and then back into our snow clothes we stuffed our turkey-and-cookie-stuffed selves and out into the starry night. The storm was over.

And the power never flickered, not even once.

About One Year Ago: I was cramming to get ready for company, so I wasn’t writing anything. But here is a list of some of my favorite Christmas delicacies (as though you don’t have enough rich foods to make already)—Nana’s Anise Biscotti, Orange-Cranberry Biscotti, Butter Cookies, Cranberry-White Chocolate Cookies, Gingerbread Men, Raisin-Filled Cookies, Lemon Squares, Cashew Brittle, Lemon Cheesecake Tassies, Chocolate Pots de Creme, Caramel Popcorn, Donuts, Ginger Cream Scones, and White Chocolate and Dried Cherry Scones. There, that should keep you busy.