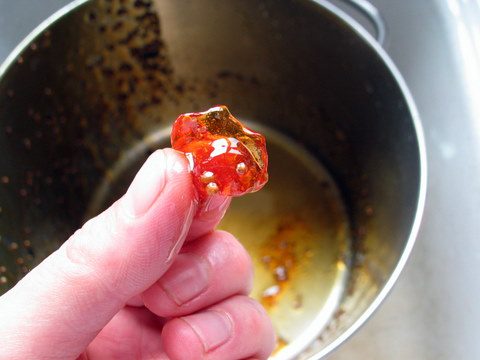 It was really quite simple. All I did was measure 2 quarts of vinegar, 16 cups of sugar, 1/4 cup of pickling spice, and 1/4 cup of salt, mix them all together in a large stainless steel pot, set the pot on the stove and turn the burner to high, and then go upstairs to put the children down for naps and totally, completely, positively forget about the pot of boiling sugar-vinegar for the next forty-five freakin’ minutes!

Yes, it was an accident. Yes, there is such a thing as vinegar candy (and yes, I’ve made it before), but that recipe does not call for pickling spice, of that I am sure.

I did sample my disaster (cooks are constitutionally unable to not taste things), and it wasn’t too bad (I did about lose a couple of teeth due to the extreme sticky factor), though certainly not a keeper. The compost pile ate that syrupy mess, and now I’m left with a severely bemired kettle.

I need to get cracking on that brine redo (this time no leaving the kitchen while the stove is on)—the cukes are patiently waiting for their sweet-and-sour soaking liquid. 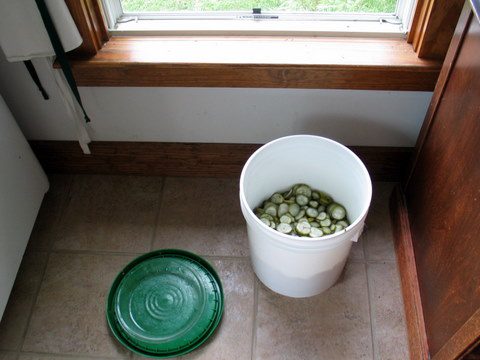 Okay. Now that the brine is heating up (the computer resides in the kitchen, folks—I’m right here), I’ll tell you the correct way to make sweet pickles. I really do know how to make them; this is the second double batch of the season and the first batch proceeded without event (if you don’t count the fact that I used a different kind of cucumber and that after undergoing four days of hot water soaks, the cucumber centers disintegrated into a liquid that sloshed about inside the newly hollow cuke and reminded me of snozzcumbers; though I couldn’t slice them like I do normally and had to settle for a chopped sweet pickle, they tasted just fine).

These are deliciously crisp. We put the slices on grilled cheese sandwiches, or I chop the pickles up and add them to egg, tuna, and chicken salads. The kids adore them.

These pickles take seven days to make, but as you can see from directions below, you are really only doing work on days one, four, and seven.

Sometimes I have trouble with my jars staying sealed for the long-haul, so I tried a trick that my Aunt Valerie shared with me—preheating the jars in a 200 degree oven before adding the hot pickles. We’ll see how it works.

A few notes about the ingredients:
*I usually use Straight Eight Cucumbers, though this year I also planted an heirloom variety called A & C Pickling Cucumber, which I think, considering their disintegrating insides, would make excellent dill pickle spears.
*I use apple cider vinegar.
*I buy pickling spice in bulk, but for those of you who are curious about that sort of thing, it is comprised of black pepper, allspice, bay leaves, cinnamon, and cloves.

Day One:
Wash the cucumbers. Put them in a container (I use a five-gallon bucket that we keep reserved for food projects) and pour boiling water over them till they are completely covered. Place a pie plate (or some such thing) on top of the cukes to help push them down in the water, and cover the container with a lid of some sort. 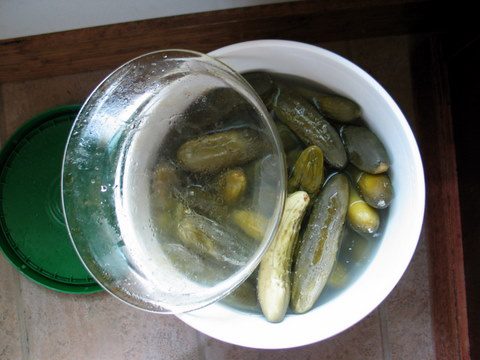 Day Two:
Drain the cucumbers and pour fresh boiling water over them.

Day Three:
Drain the cucumbers and pour fresh boiling water over them.

Day Four:
Drain the cucumbers. Cut them into 1/8th inch slices and put the slices back in the bucket from whence they came.

In a large, heavy kettle, combine the sugar, vinegar, salt, and pickling spice. Bring the mixture to a boil, stirring occasionally. Do not leave the room. 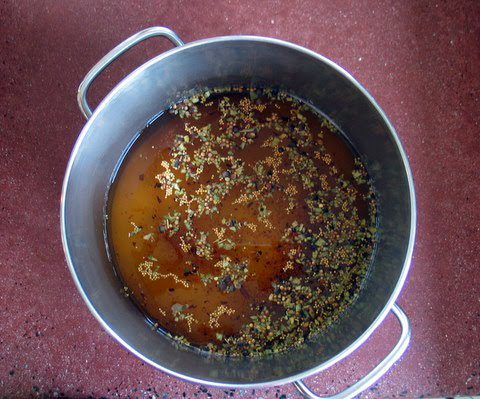 When the brine has reached a full rolling boil, pour it over the cucumber slices. Cover the container. 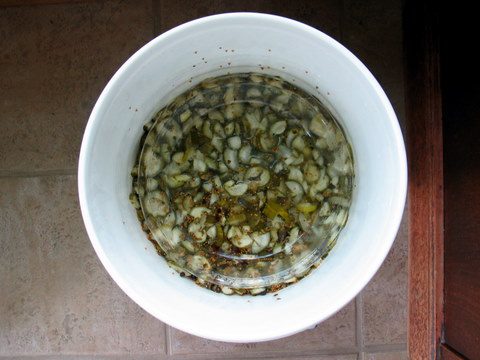 Day Five:
Drain the pickles, reserving the brine. Boil the brine and pour it back over the pickle slices.

Day Seven:
Wash your canning jars (half-pints, pints, quarts, whatever you want) and lay them on their sides in the oven. Turn the oven to 200 degrees. Assemble your lids and rings.

Drain the pickles. Bring the brine to a boil. Working in batches (because you don’t want to cook the pickles for too long), add some of the pickle slices. 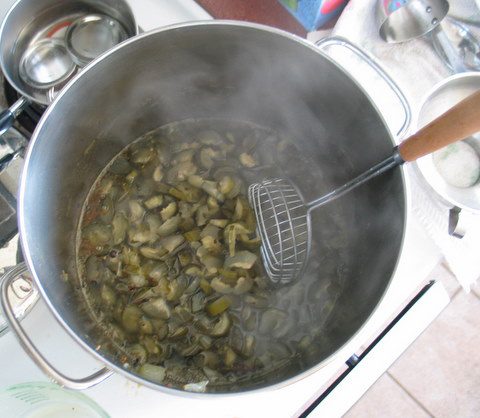 When the brine has come back to a full boil, scoop the pickles into the jar, tamping them down with a fork. Once the jar is well-packed, ladle in enough brine to cover the pickles, jiggling the jar to release any air bubbles. Wipe the jar rim with a very clean, wet cloth, put the lid on top and screw the ring on tightly. Set the jar (careful—it’s hot!) on a corner of counter where it won’t be bothered for a day. 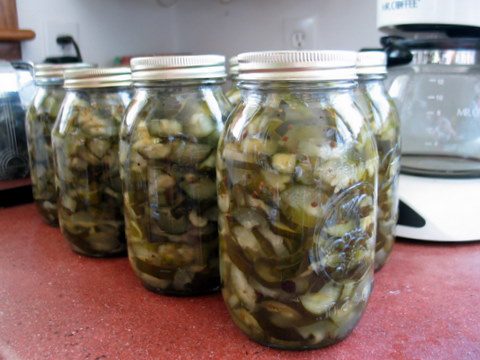 Repeat the process till you have used up all the pickles. Discard any leftover brine.

About One Year Ago: Ups and Downs, including yet another kitchen flop.