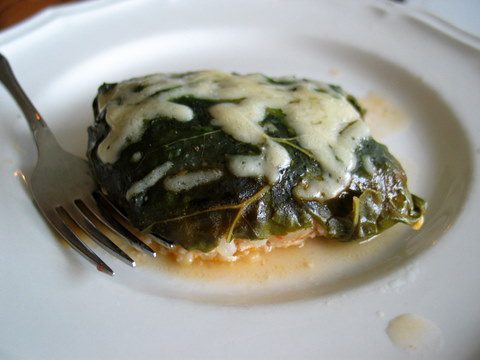 The garden has stressed me out this spring. Actually, it’s not the garden that’s stressing me out, but the fact that I have not been able to get into the garden due to the incontinent skies. It’s been raining almost every day, often in the afternoon. It reminds me of the three years that we lived in Nicaragua, a country (that used to be) filled (until we cut most of them down) with rain forests.

I have an announcement, people: Virginia weather is not supposed to emulate the weather patterns of a rain forest. It’s kind of freaky.

I think I spied a banana plant shooting up among the asparagus fronds.

We did have two days without rain this past week (I think it was Sunday and Monday), and so on Monday I worked in the garden till noon and then when Mr. Handsome came home he took his turn, walking behind the bucking tiller, inspecting the plants, weeding. The next day it rained all day, continually. But I felt a little better.

Well, um, I should say I felt a little better about the garden since we had gotten a chance to rein (ooh, bad word) it in a bit, but the heavy skies and cool temps were a real mood-damper (eek!). I piddled. The kids hovered. I felt itchy-crazy under my skin and my voice acquired a note of panic. But I breathed deep and tried to pretend that we hadn’t all been really piled on top of each other for the past seven hours. And then I made myself walk out through the gentle rain to the garden to pick some chard for supper. That was nice.

And then I went back outside for an onion. And basil. And parsley. And oregano. It was better than nice; it was kind of fun. I made splashing sounds as I slogged through the grass in Mr. Handsome’s flip-flops, making the little trips out to the garden kind of like an adventure. And goodness knows, I sure needed an adventure. 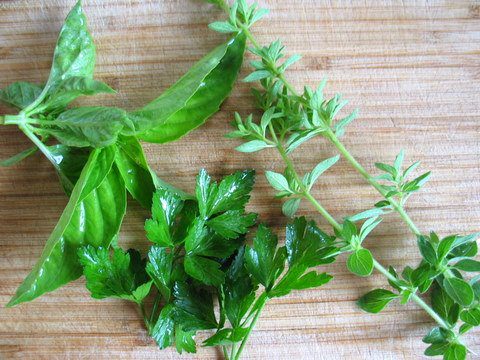 I whipped up such a delicious dinner—a culinary adventure of the best sort—that I felt better for a little while. And then we had a family movie night because we had to have some type of reward for making it through a day like that, and because not everyone in my family would call Swiss chard rolls a reward. 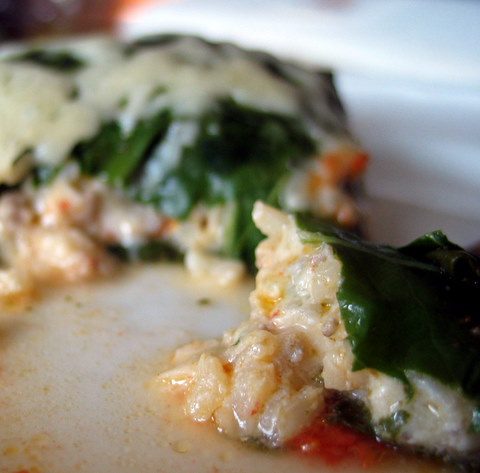 There were lots of leftovers so I had the privilege of discovering that chard rolls make fantastic leftovers. I ate these rolls for five meals straight, not counting breakfast. I looked forward to each meal, and I was sad when I ate the last one. 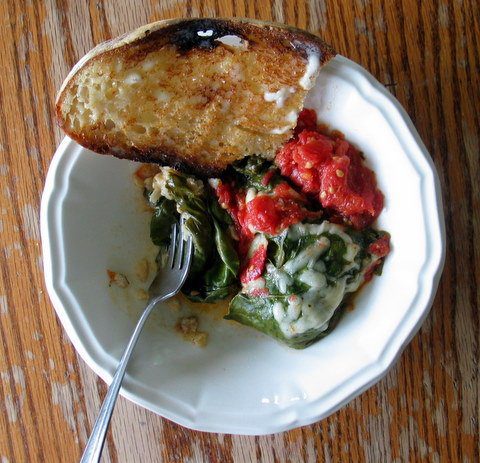 These rolls scream for creativity. I used the ingredients I had in my kitchen (and garden), but you can switch them up, substituting fresh tomatoes for the dried (or canned), dried herbs for the fresh, different grains (bulgur, couscous, orzo, white rice) for the brown rice, and ground beef, ham, or bacon for the sausage. Or you could omit the meat all together.

The original recipe suggests two different fillings for the rolls, neither of which call for meat. The first is a mushroom filling with celery, marjoram, mushrooms, cooked bulgur, dry sherry, soy sauce, dill, thyme, currants, and lemon juice. The second kind is a simple cheese filling involving leeks, scallions, cottage cheese, and basil.

Wash the chard and cut out the central stem. Stack the leaves of chard on top of each other and loosely roll them up. Place them in a steamer and steam for a couple minutes, or until the leaves are bright green and wilted. Drain the chard and set aside.

In a saucepan, saute the onion and garlic in the olive oil till translucent, about five minutes. Set aside.

In mixing bowl, combine the rice, sausage, sauteed mixture, the fresh herbs, roasted tomatoes, ricotta and cheddar cheeses, and the salt and pepper. Taste to adjust seasonings (do not under-salt the mixture).

Grease a casserole dish (a 9 x 12 was a little too big for the amount I had, so I used my 7 x 11 pan). Pour the drained tomatoes into the dish and spread them out so they cover the bottom of the pan.

To assemble the rolls:
Being as gentle as humanly possible, separate the leaves of chard and lay them out on a work surface. 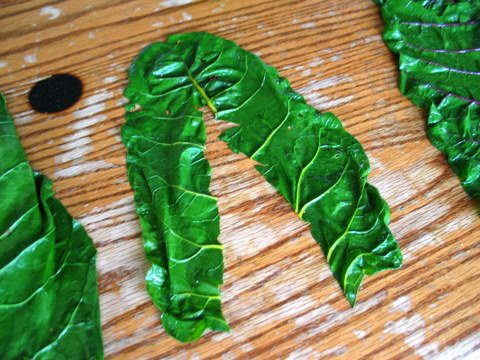 Pull the leaves together so the gap from where the stem used to be no longer shows. Place about ½ cup of filling in the center of the bottom part of the leaf. 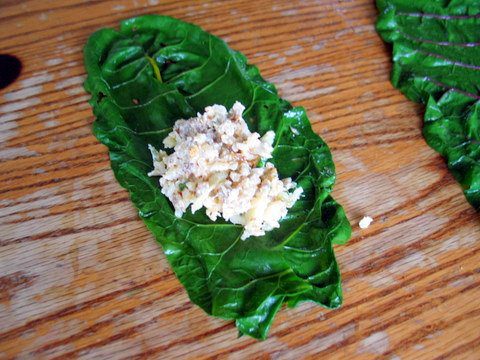 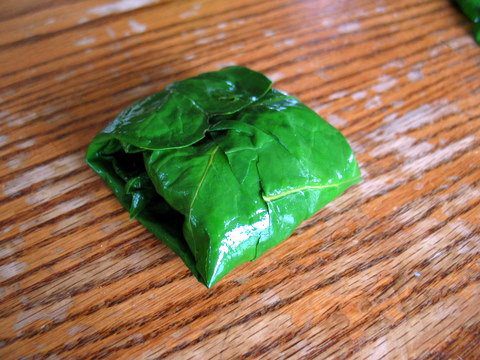 Repeat the process until you run out of either the steamed leaves or the filling.

Place the rolls with their seam-sides down on top of the stewed tomatoes. Pour the reserved tomato juice over of the rolls. Sprinkle the leaves with some more salt and pepper. 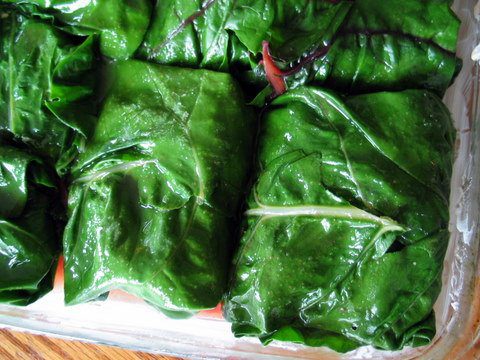 Cover the dish tightly with tin foil and bake at 350 degrees for about 45 minutes. About ten minutes before the rolls are done baking, remove the pan from the oven, take off the foil, sprinkle the Parmesan cheese over the rolls, and return to the pan to the oven, uncovered, to finish baking.

Serve the Swiss chard rolls with some crusty bread.