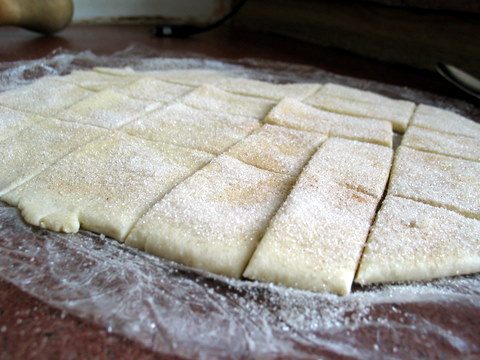 Back when I made that rhubarb pie, I said that the cream cheese pastry recipe would make more than you actually needed. I said there was a reason I was giving you a recipe that would cause you to end up with leftovers, but I didn’t tell you what that reason was. Now, a couple weeks later, I’m ready to tell you why.

Sunday confession: I do this to my kids all the time—order them to do things without giving them any reason. I tell them I’ll explain later, but I am not usually able to put them off for five minutes, let along a couple weeks, thanks to their vigorous pestering. You, on the other hand, have been everlastingly patient, and as a result I’m racked with guilt over how I’ve so brutishly abused your gentle natures.

I can just see it now: every time you open your refrigerator door you see the tightly wrapped disk of white dough sitting on your fridge shelf (because I know that every one of you made that pastry dough within two hours of me posting the recipe) and you suck your teeth, furrow your brow, give your heads a shake, and then reach passed the dough for the jar of grape jelly before softly shutting the door.

Such visions leave me feeling so forlorn… Let’s move on, shall we?

What you’re going to do with those pastry scraps is this: roll them flat, sprinkle them with cinnamon sugar, cut them into squares, and bake them in a hot oven. I’m not sure why it took me so long to tell you something that’s really that simple. I probably could’ve even twittered it ’cause that sentence was less than a hundred and forty characters. But now that I’ve gone and been long-winded, I’ll say a little more (because I like characters of all ilk—literary, human, cartoon…). 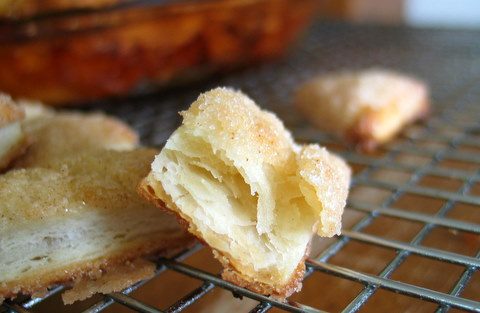 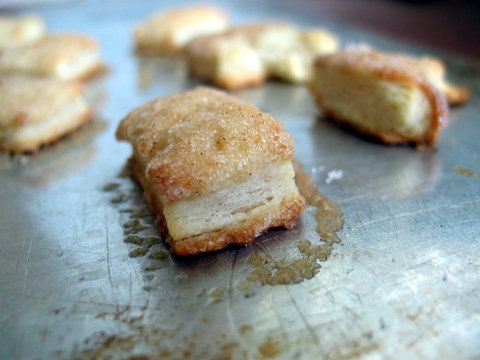 It is of upmost importance that you fully bake these tea biscuits. If they are at all under-baked, they will be doughy in a very yucky and disappointing way; in other words, bake them as long as you possibly dare. When they are baked to perfection, they are flaky, crispy, and utterly irresistible.

These are best eaten the same day they are made. I suppose you could freeze them as soon as they’ve cooled, but I didn’t try that—we ate them up too quickly.

Combine the sugar and cinnamon and set aside.

Cut the pastry into whatever geometric shapes you desire and scatter them about on an ungreased baking sheet. Bake the cookies at 450 degrees for 10-15 minutes.

Cool and eat, or store them in an airtight container.