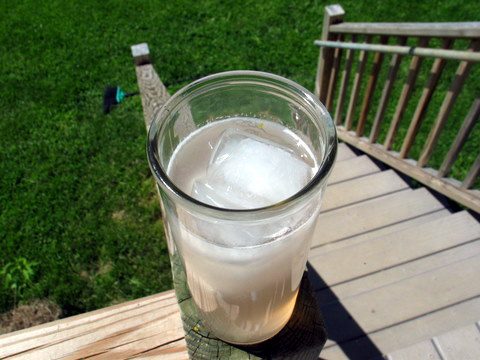 I still want to talk about rhubarb. I hope you’ll forgive me. But hey, it’s good stuff, so I don’t know why I’m apologizing.

Our rhubarb patch has thinned out considerably what with all the pickings, and I don’t feel like I’ve even gotten that much out of it—only a couple little bags have made it into the freezer. I think it might be time to transplant out sections of the rhubarb, extending the patch and giving the existing plants more space to expand. Then maybe I’d have enough rhubarb. I’m a greedy rhubarb lady, it would seem. 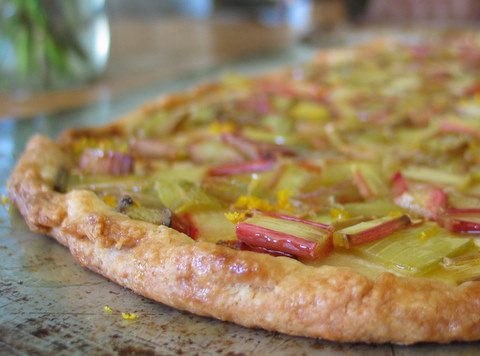 I suppose it could be worse. I could be greedy with racy lingerie, or with vintage jewelry. Or with high-tech do-dads, or with DVDs. Or with yard art, or wall art, or guns, or vinegars, or handbags, or China dolls, or antique furniture, or Tupperware. Considering all the options, I think rhubarb is a pretty innocent obsession.

What follows are two recipes: a rhubarb tea and a rhubarb tart. That’s right, I’m giving you a two for one deal—two recipes in one blog post. Now don’t get greedy now and go asking for three. You’re only gettin’ two. That’s it.

Oh, and I suggest you put a patch of rhubarb in before next summer. Because if you make these two recipes you might find you get a little rhubarb obsessed yourself.

This faintly pink tea is the epitome of refreshing. The rhubarb gives it a discreet tang, and the ginger gives it zip, and I’ll wager a guess that on hot summer days we can all use some zippy tang to push us through. 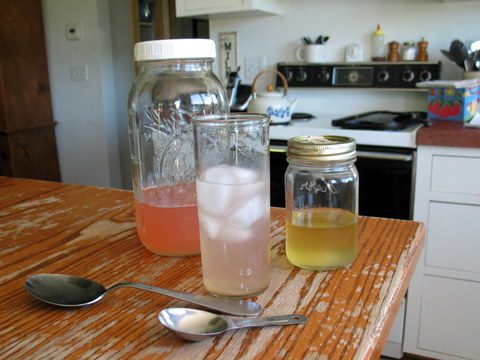 Mix all the ingredients together. Taste to check sweetness and add more sugar if needed. Serve over ice.

Note Number One: For the rhubarb concentrate
Put 8 cups chunked rhubarb in a medium-sized saucepan and add 8 cups of water. Bring the mixture to a boil and simmer for five minutes uncovered. Turn the burner off, place a lid on the concentrate, and allow it steep for thirty minutes. Pour the mixture through a strainer, discard the rhubarb (or eat it, if you want), and store the concentrate in the fridge. It will keep for at least a week, if not a month (or more).

Note Number Two: For the ginger concentrate
Place ½ cup of roughly chopped, peeled fresh ginger in a small saucepan. Add 1 cup of water. Bring the mixture to a boil, and then, in the same manner as the rhubarb mixture, let it steep for thirty minutes. Strain, discard the ginger, and chill the liquid. Like the rhubarb concentrate, it also keeps indefinitely.

Rhubarb Tart
Adapted from the April 2009 issue of Gourmet.

This tart is extremely classy and stunningly gorgeous, in a rustic sense. The original recipe calls for it to be served with vanilla ice cream, but I think ice cream would overwhelm the thin, buttery pastry. I prefer to serve the tart with whipped cream, or nothing at all. It’s that good. 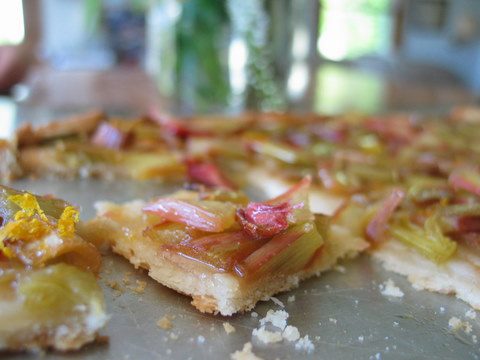 The tart is best eaten the same day it is made because the crust, which is so charmingly crisp and buttery when it comes out of the oven, will soften with time. The leftovers are still delicious though, so don’t feel that you have to eat it all in one sitting. Though you might end up doing just that.

The recipe says to cut long strips of rhubarb into thin slices, but I had already chopped my rhubarb stalks into half-inch pieces, thus the small squares of rhubarb in my photos. While my method tasted just fine, it took a really long time and made me feel slightly insane. I recommend that you slice your stalks a bit bigger before slicing them thinly.

Mix together the orange juice, lime juice, and sugar. Pour over the rhubarb and toss to mix well. Let the rhubarb macerate for thirty minutes.

While the rhubarb is macerating, roll and shape the pastry dough according to these instructions.

When the rhubarb has finished macerating, drain the rhubarb, reserving the juice. Pour the juice in a small saucepan and simmer for 15 to 30 minutes or until it has reduced to about 1/4 cup and has become a sticky syrup.

While the juices are cooking down, place the rhubarb pieces on the pastry crust. Bake the pastry at 350 degrees for 25-35 minutes, or until the edges are brown and the bottom of the pastry is also brown.

Remove the tart from the oven and brush the rhubarb and the edges of the crust—in other words, everything—with the syrup. (You’ll probably have a little syrup left over; thin it with warm water and add it to the rhubarb tea for a delightful kick.) Sprinkle with the zest. 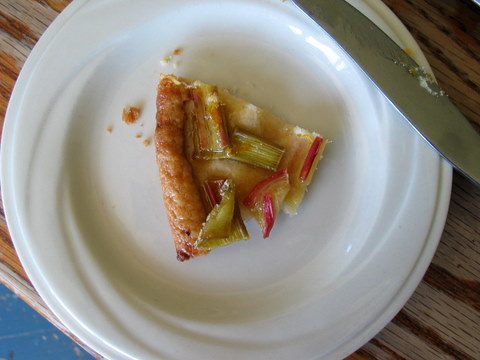 Serve plain, or with whipped cream.