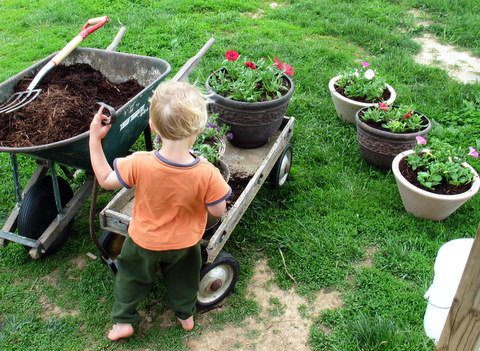 We spent another evening in the garden last night. This is an amazing time of year. Everything needs to go in the garden right NOW, so we plant, plant, plant, and then plant some more. But this is simple compared to what will come later on in the season. At least it’s cool and breezy this time of year, and we’re all excited to be outside in the brand new green, kind of pleased with our freshly aching backs. An aching back feels almost good if it is a result of meaningful productivity. (“Meaningful productivity” is redundant, I suppose, but I’m leaving it because I need all the emphatic emphasis I can get when it comes to aching backs.)

I worked on potting my plants in the afternoon and then went inside to make a quick supper before we headed back out again. I made another batch of Swamp Monster Soup, except that this time I made some variations on the recipe. Molly’s recipe called for a half to three-quarters of a pound of green garlic, and while I have a nice little row of garlic in the garden, I wasn’t about to pull up a half dozen plants just to make that soup. So I minced three cloves of garlic instead and added a couple chunked potatoes to the broth to thicken the soup. It didn’t work. I ended up with a warm spinach puree that tasted about as good as it sounds. The stuff I made just a few hours earlier at lunch was notably better—that time around I used one green garlic, one garlic clove, and no potato. Apparently, you really need the green garlic for this recipe, which is probably why it’s called “Spinach and Green Garlic Soup”. Duh.

After the kids gagged down their bowls of bile—Yo-Yo came up with worse analogies; and Nickel was the only willing sludge slurper—I pulled out the last of the mint-chocolate chip ice cream and we had cones, as well as a nice little color theme going—too bad it wasn’t St. Patrick’s Day. And then I pulled out granola bars. And later on that night I made a ginormous bowl of popcorn sprinkled with nutritional yeast, and after the kids were in bed, a miffed and hungry Mr. Handsome ate cornflakes.

This morning Mr. Handsome was still shaking his head over last night’s supper: “That’s gotta be one of your most pathetic meals yet.” And later, “Do you make that meal only after you cut the grass?” I have a feeling he’s working on a few more well-placed jabs.

So anyway, back to last night, in the garden. A storm was brewing so we worked fast. I put a few more perennials and annuals in the ground, planted one kind of dry beans, and started working on the tomatoes. The kids ran hither and yon, fetching another bale of straw, the hoe, more compost, another flat of plants. Then a few drops of rain would fall and I would yell out more orders, peppered heavily with Move It Kids and Hurry-Hurries.

Mr. Handsome joined us after he finished washing the dishes and cleaning up the house. I patted the tomato seedlings into the ground and he followed along behind with cages and stakes. Yo-Yo and I threw straw all over the place and then we moved on to the basil, parsley, and peppers. The occasional spritz from the sky or rumble of thunder caused me to straighten up and bellow, “Come on! Let’s go, kids! MOVE!” immediately followed by, “Do NOT run in the garden!” We made the hills for the cucumbers and mulched around them but didn’t get them planted before the rumbles of thunder sent us hightailing for the house. I had just finished whipping the kids in and out of the tub when the sky burst open, the icing to our garden cake. 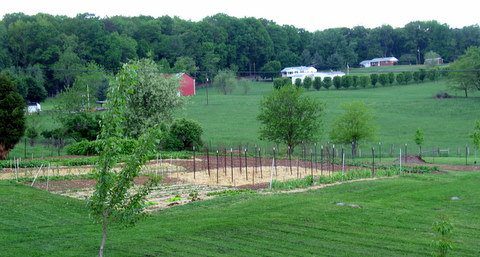 (Only the Nicaraguan red beans and the cucumbers left to go. And maybe some more squashes if I feel like it.)