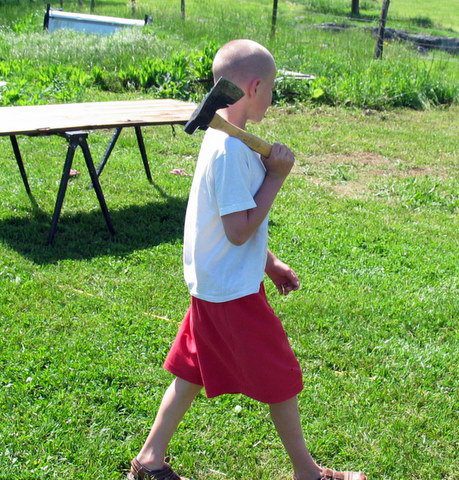 We had a perfect day for butchering chickens—sunny, breezy, and a couple degrees below hot.

We didn’t get started as soon as we had planned because Mr. Handsome wasn’t done Setting Up. You have to understand this about Mr. Handsome: he likes his systems. He hates extra motions and inadequate facilities. (It’s why I can’t stand working in the kitchen with him—he’s forever telling me how to do things differently.) He’d rather spend several hours setting up than get started early and lurch along using a flawed system. So, thanks to Mr. Handsome’s idiosyncrasies, we didn’t get started on time, but we had the best set-up yet. 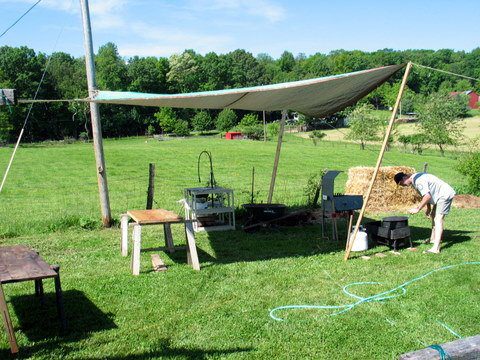 The gas stove’s legs were removed to keep it closer to the ground because it’s easier to bend over to dip the chickens then it is to hoist them up to waist height. 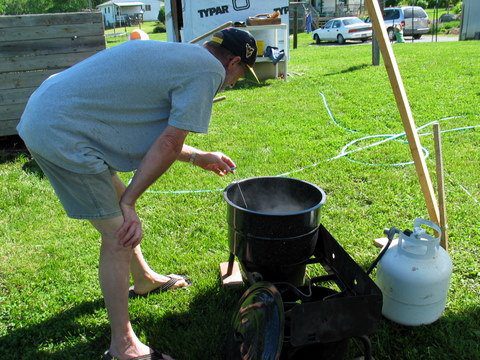 We had borrowed a tumbler (the de-featherer) from our friend Lee. 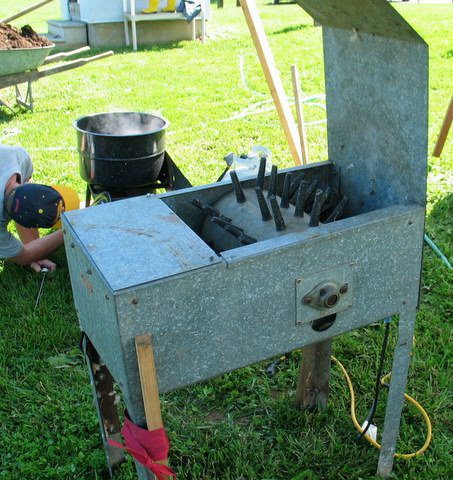 We had tables, extra shelving, trash buckets for the innards, a wheelbarrow of dirt to cover the innards as we went along, and a shovel to sprinkle it with. Mr. Handsome even rigged up an outdoor sink. He was adamant that we would all be working together. Ain’t that sweet? 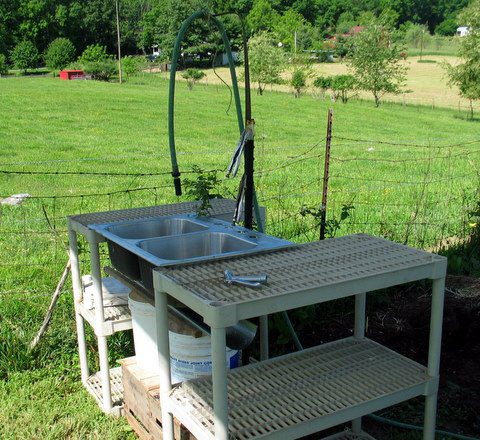 The first couple chickens were slow-going as we had to smooth out the bumps. We had to fetch the kitchen stools, the cooler with ice, the bags and twisties (which, because I had no pockets, I stashed in my bra—my brothers laughed at my newly created “breast pocket”), and sharp knives. 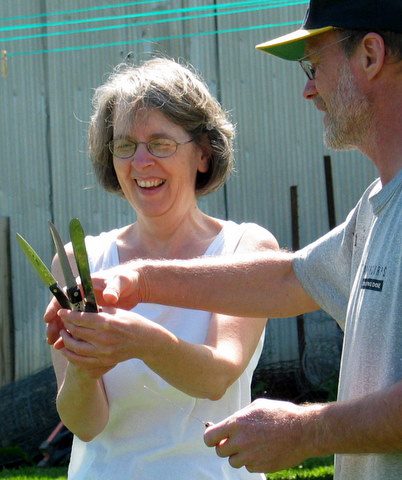 It’s not a good idea to butcher chickens with dull knives. Even if you think you have sharp knives, they are not sharp enough. Just so you know.

We had forgotten to tell Mom and Dad to bring their killing cone, so Mr. Handsome and my Balding Bro rigged one out of a duct-taped five-gallon bucket. It didn’t work too well because it wasn’t wide enough to hold the fat chickens, so after a few experiments they settled on using a combination of cone, noose, and ax. 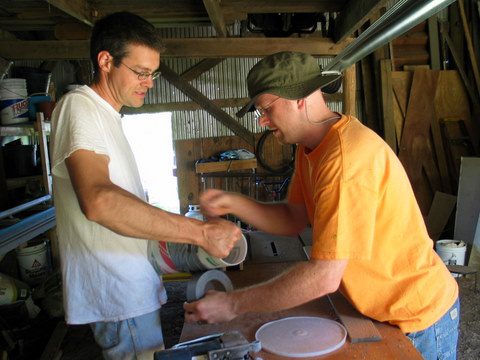 While Mr. Handsome was fully engrossed in all the butchery details, I focused on the kids. I was a little concerned about how they would handle the day’s events, because after all, it had been two years since we last butchered chickens.

The closer we got to butchering time, the more withdrawn Miss Becca Boo became. She accompanied me when I walked down to the chicken tractor to take a last picture of the chickies. As we turned to trudge back up to the house, she slumped against me, pressing her head into my stomach like she does when she’s on the verge of tears. I suspected this moment was coming and that “Buck-Up, Honeycup” wouldn’t cut it. I was hopeful that sympathy and education would be sufficient, so I gave it my best shot. “Oh, honey,” I said. “You don’t like this, do you? It makes you feel sad because you like these birds, right?”

Her head bobbed painfully up and down against my hip bone. I shifted my position so that her head was nestled squarely in my tummy.

“It makes me feel a little funny, too,” I continued. “Papa doesn’t like to butcher animals either. But you know what? We raised these birds for our food. They aren’t pets. We would never butcher Francie or Blackie, oh my no! But we got these chickens so that we can have meat. It’s part of life, but I know it’s not always easy. That’s why we don’t eat meat all the time—we just eat some meat—because it’s not fun to butcher. It’s like our corn crop. We plant the corn and take care of it and then when it’s ready, we harvest it so that we can eat it. That’s what we’re doing with these birds. And you were an important part of the whole process because you took such good care of the chickies. You helped out an awful lot.”

My words must’ve made sense (yes!) because Miss Becca Boo sniffed, took my hand, and turned resolutely towards the house. 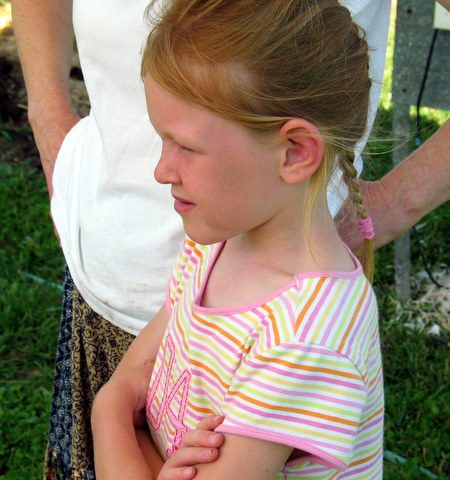 Over the course of the day she underwent a dramatic transformation. At first she hung back (and she never witnessed the actual killing; neither did I) and just watched, but within a few hours she was fully immersed in the work. 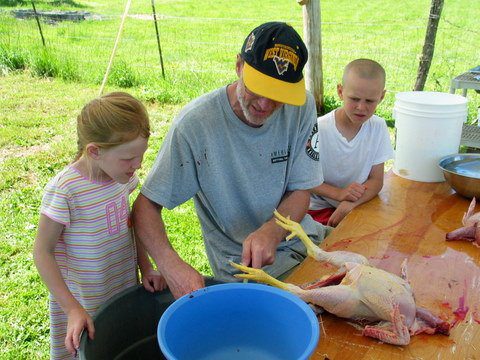 She was amazing—both my parents said so. On a couple different occasions she exclaimed, the elation stemming from relief, I suppose, “This isn’t bad at all! This is fun!” 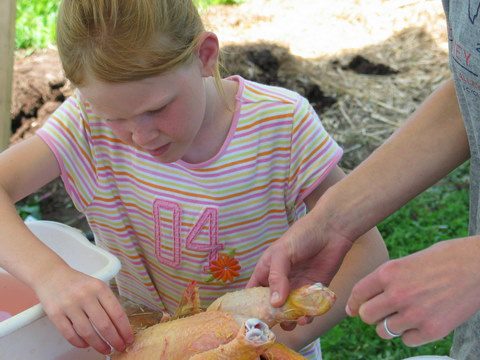 Here she is, working to extract the innards, searching for those mysterious cords that mark the upper reaches of the chest cavity—once you find them, you’ve gone in far enough and can start pulling everything out (though I wouldn’t know because I’ve never actually done it). 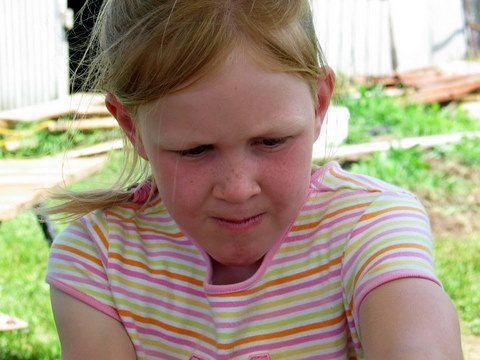 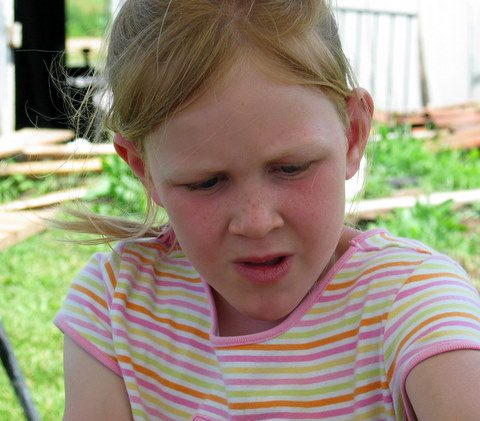 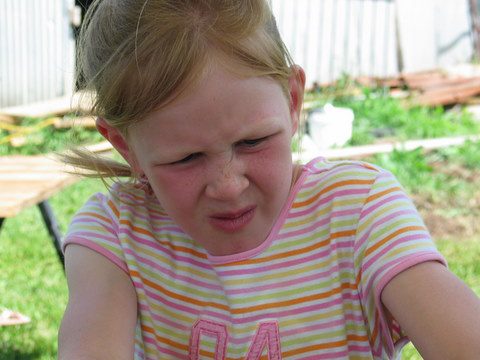 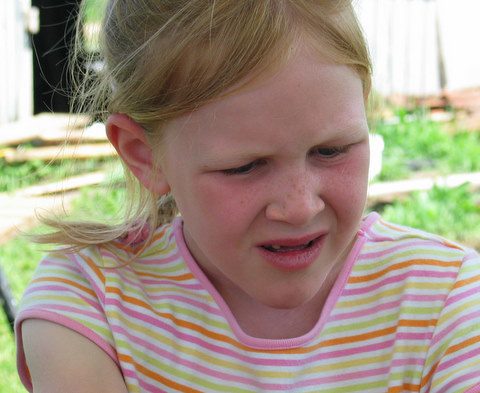 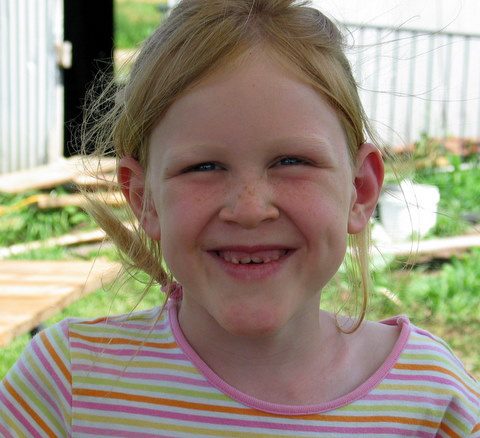 Yo-Yo’s job was to cut off the chicken feet, and he also tried his hand at the gutting. 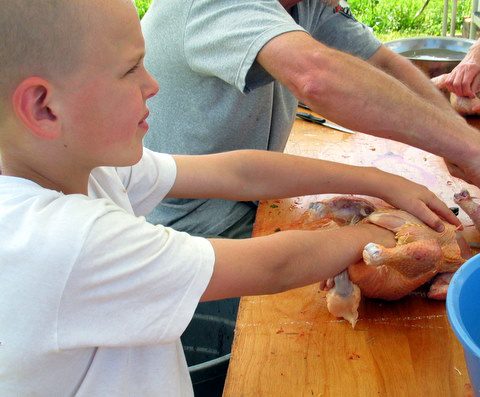 While he didn’t actually kill a chicken (despite all his prior boosting), he did help to hold a couple of them while Mr. Handsome swung the ax. I was impressed. 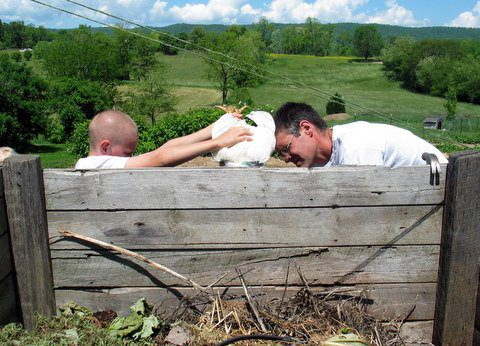 Sweetsie kept her hands over her ears—her reflexive habit when anxious—and spent a good part of the day lolling on the porch and reading books. 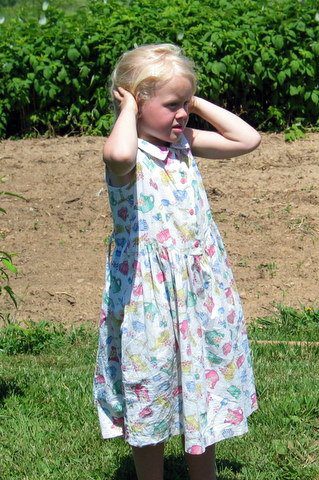 The Baby Nickel was totally fascinated with the butchering. 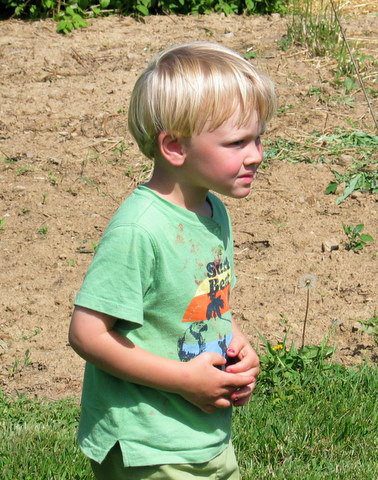 Despite our matter-of-fact attitudes and the premise that this is just a part of life, Mr. Handsome and I were both a little concerned that he was seeing too much. However, we were too busy to keep pulling him back every time someone picked up the ax, so we finally gave up and let him stare all he wanted. 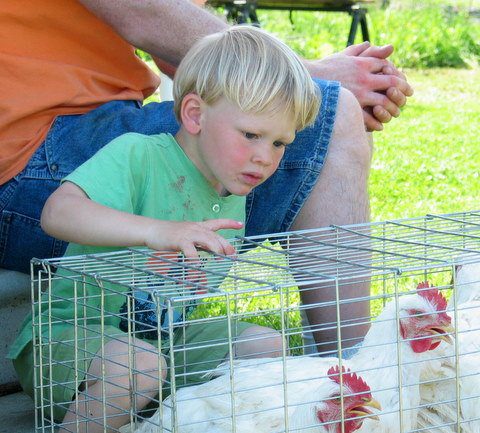 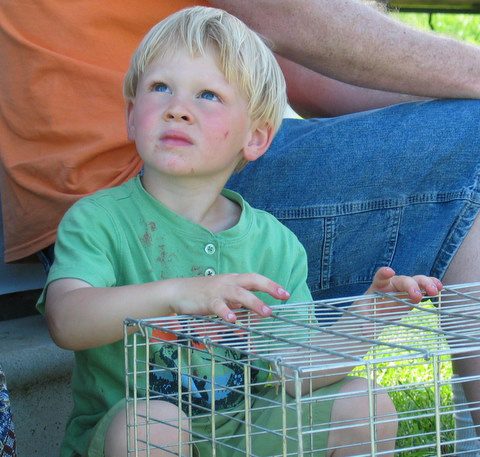 Despite the earthiness of the day’s proceedings, or maybe because of them, I found the whole event to be deeply satisfying. Butchering really isn’t hard to do (especially if you have a good system)—it just takes time—and when you spend the day with your favorite people on earth, laughing and learning and working hard, it’s gratifying. As my Tiny-Little Brother said, “Screw amusement parks—when we want to have fun, we butcher chickens!” I wouldn’t quite call it fun, as in merry, ho-ho, and tra-la-la fun, but I would call it fun in the sense that it was productive and rewarding. And that might be the best kind of fun when it comes down to it. 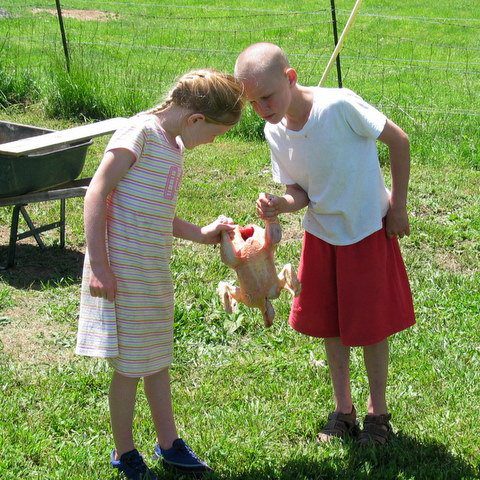 For the record:
We started butchering at about ten in the morning and we finished by six (minus a little cleaning up that happened after supper). We butchered 34 chickens—the extra one came from our neighbor boy who showed up with a giant chicken tucked under his arm. “It fell off one of the chicken trucks,” he explained. “We kept it and fed it and it’s ready for butchering. You can have it.”

For more on information on butchering chickens, visit here. 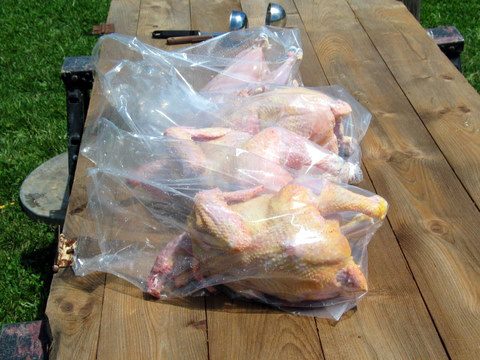