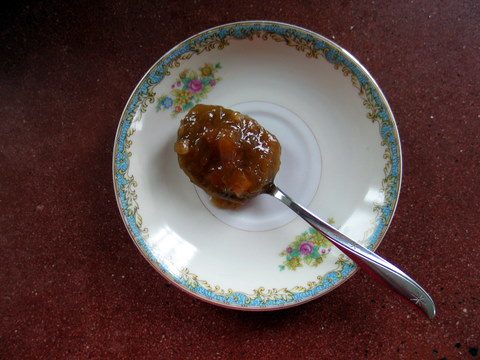 It’s rhubarb season! So far I’ve made a rhubarb pie (with strawberry juice), a rhubarb crisp (but I don’t think it counts since it was made from last year’s frozen rhubarb), another rhubarb pie (which I will write about shortly), and rhubarb jam. It is the jam I want to talk about now.

This jam is oh-so-simple to make—just toss four ingredients together, simmer them for twenty minutes and ta-da!—you have yourself some tangy, punchy jam. (Because this jam doesn’t call for any of the traditional jam thickeners such as Sure-jell, the end result is less gelatinous and more like thick, blob-y fruit preserves.)

While the original recipe calls for rhubarb, sugar, candied ginger, and lemon zest, I did a little research and have come to the conclusion that you can make any number of variations on the theme and the recipe will be none the worse for it: when I was digging around in my cupboard for the candied ginger, I found some candied orange peel which I then decided to add in place of the called-for lemon zest. The chewy chunks of fruit gave the jam a marmalade-like flair—a good thing, in my book. 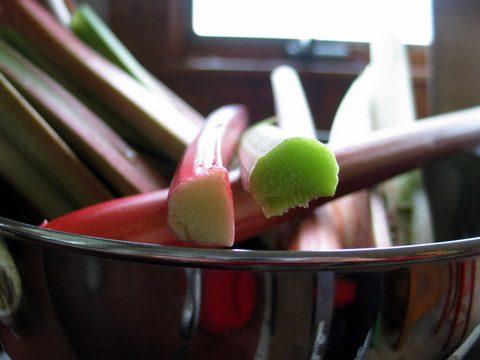 Some variation suggestions: Add fresh, powdered, or candied ginger, lemon or orange zest, candied lemon or orange peel. You may want to add other fresh or frozen fruits, too, though you might need to adjust the sugar and cooking times accordingly. I read one recipe that paired red raspberries with rhubarb, and that got me to thinking about fresh cranberries… And now that I wrote the words “fresh cranberries” I’m wondering about dried—I bet craisins (golden raisins? sour cherries?) would be quite tasty and in keeping with the marmalade theme.

Anyway, as my rhubarb comes in I plan to cook up little batches of this jam. Each recipe yields a pint of jam, so I think I’ll hot-pack it in half-pint jars as I go along. That is, if we don’t eat it all up first. 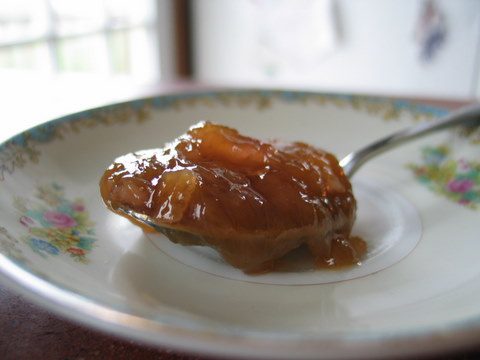 Rhubarb Jam
Adapted from Epicurious, a recipe from the July 1997 issue of Bon Appétit.

The original recipe called for 1 1/4 cups of sugar, but I cut it back to one cup. Depending on your preferences, you may want increase the amount, or even decrease it some more.

The recipe doesn’t call for any water, but I added a couple tablespoons because the mixture seemed impossibly dry and I was afraid it would scorch. I needn’t have worried though, because as soon as the rhubarb started heating up, it wept copious amounts of water. If you, like me, want to add a little liquid to appease your qualms, I suggest using only a couple tablespoons of water or fruit juice (orange, grape, or apple would all be delicious, I think).

(See the body of the post for the other recipe variations.)

Mix the ingredients together in a heavy-bottomed saucepan and bring to a boil. Once it is boiling steadily, turn the heat down to a high medium so that it still bubbles pleasantly, but not at break-neck speed. Once the mixture has thickened (it will mound up on a spoon and briefly separate when you cut through it with the stirring spoon) it is done. Note: Stir the mixture quite a bit at the beginning and end of the cooking time to prevent scorching, but in the middle you can relax a little, checking on it once every two or three minutes.

Either hot pack the jam in jars, or cool it to room temperature before transferring it to the fridge or freezer.

Serve the rhubarb jam on toast, muffins, scones, add it to yogurt, serve warm on top of vanilla or strawberry ice cream, use as a fruit filling for shortbread cookies and coffee cakes, or drizzle over cheesecake.

Updated, May 8, 2009
The second time I made this jam, I added about a third cup of frozen cranberries and they turned the jam nice and red (the variety of rhubarb I have in my garden tends to be mostly green with a few red stalks, resulting in a pinkish jam). 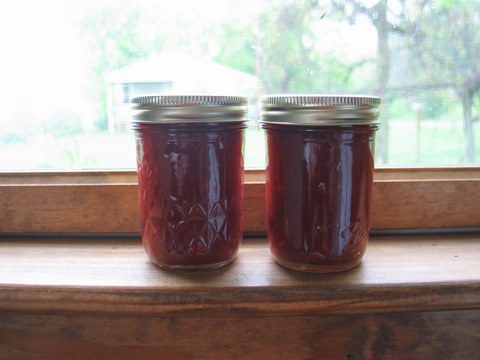 For that batch of jam I used lemon zest and for the next one I used orange zest. Both were delicious.