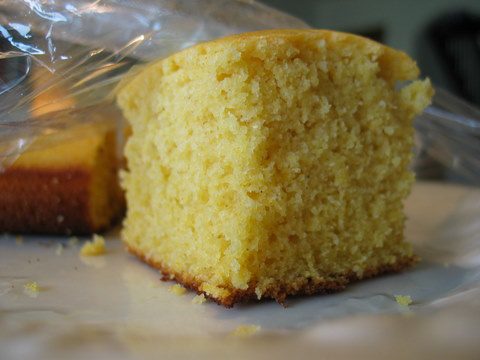 Once upon a time, back in the day when I was just a young ‘un, my mom and dad had a money-based spat. My dad donned his better-than-thou hat and declared up and down and backwards and forwards that he could live on a simple diet of, say, beans and cornbread. This got my mother’s feathers all in a ruffle, so she hatched a plan: she would serve him just beans and cornbread until he fell to his knees, begging for mercy.

This is where I came in. My mom told me I could get out of my daily dish-washing chore if I, instead, mixed up the evening batch of cornbread. This sounded like a very fine plan to me. I loved cornbread and I loved baking. So every day after school (and in my memory’s mind, it was for weeks on end) I waltzed into the kitchen ready to do my duty.

Into the white plastic bowl I measured the flour, cornmeal, baking powder, salt, and sugar. In a smaller bowl I stirred together the milk, egg, and oil. I dumped the contents of the small bowl into the larger bowl and whisked it all together, poured the batter into a greased pan, and that was it. Much easier than doing the dishes, and definitely more fun. 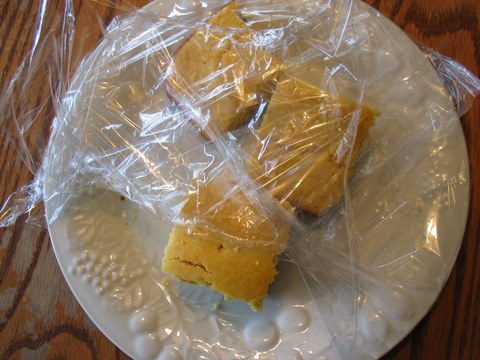 What follows here is the story, in my mother’s words, from Our Book. It’s taken from the chapter on marital conflict, of which both my mother and I had (um, have) a lot to say. (I’ll call my father “The Happy Pappy”, since that’s his nickname, sort of.) My mother writes:

…Here’s a little trick I pulled once, fed up over The Happy Pappy’s superior Sir Simple Lifestyle attitude. Our money system at the time involved keeping cash in envelopes, specified for gas, groceries, entertainment, clothing, and so forth, the agreed-upon allotment per month (at first we’d used jelly jars, till one got dashed to the floor in a dressing room at McCrory’s and broke into smithereens). This arrangement, allowing us to determine at a glance the state of our finances, was supposed to help us keep our spending reigned in, but toward payday, our funds gravely depleted, I’d find myself pilfering from whichever envelopes still held a few bills or coins and leaving in little notes like “groc owes gas $2.”

I’d tell The Happy Pappy we needed to budget more for food. He’d say, “Why can’t we take a lesson from the Indians in Peru? Their sole diet is potatoes! Just potatoes! People like that eat only when they’re hungry, not tempted by all the choices. Betcha’ their teeth aren’t full of holes, either. Why can’t we live that way? Why don’t we have cornbread every day? Cornbread, yeah. Cornbread and baked beans. Why don’t we try subsisting on cornbread and beans for a whole month, for an experiment?”

He wouldn’t come down off his soapbox. I was plenty irritated. He was the one who liked to order a big slab of meat if we were at a restaurant—but now this. I decided to make him eat his words. I stockpiled cans of baked beans and one Tuesday afternoon after school, third-grader JJ learning to make cornbread. “It’s going to be a joke on Daddy,” I told her.

The Happy Pappy raved over our supper—the cornbread, two cans of beans doctored up with chopped hot dogs, and some kind of vegetable (I wasn’t about to inflict us all with scurvy). He stuffed himself and declared he’d take the leftovers in his lunch next day.

He forgot the piece of cornbread, though. JJ took it along on the bus in the morning to give him and he ate it after school. When he arrived home I announced we were having another beans meal—JJ was busy with more cornbread. I showed him my cupboard stockpile and he laughed.

Although I skipped the hot dogs that night, Wednesday, we again ended up with leftover beans. Well, fine. I said if Daddy didn’t want them for his lunch the next day, we’d have them for supper.

Maybe he just forgot to grab the plastic container, Thursday morning? So for Thursday’s supper I needed to open only one new can of beans. Mixed with the old ones, they accompanied JJ’s next batch of cornbread and a different anti-scurvy vegetable—and this time the extras were definitely going to go along to school with The Happy Pappy.

I made sure in the morning he didn’t take off without his lunch. But after school on Friday we departed for the mountains, for a get-together weekend with a gang of teachers and their families. Nobody had been assigned to bring beans. Friday night and Saturday, we feasted. Spaghetti! Bacon and eggs! Hoagies! Chicken! Back home again on Sunday I couldn’t bring myself to revert to the regimen. I’d lost my momentum. I fixed tomato sandwiches for our meal, yummy tomato sandwiches.

Okay, so I shouldn’t have been the one to peter out first. But neither did Sir Simple fall onto his knees and beg me to keep cooking beans. 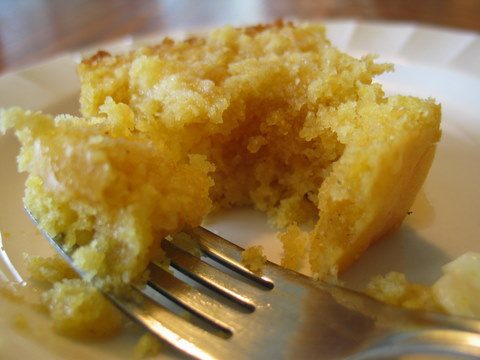 Mix the dry ingredients together. Add the wet ingredients and whisk gently just until combined. Pour the batter into a greased square (9 x 9) glass pan. Bake at 375 degrees for 20-30 minutes, or until the top has a couple cracks in it, the edges are brown, and a toothpick, inserted in the middle, comes out clean. 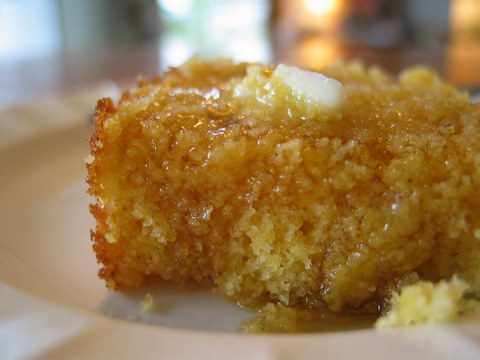 Serve hot, with butter and maple syrup. And, of course, beans.

Updated on May 4, 2010: For a hundred-percent whole grain cornbread, substitute whole wheat pastry flour for the white flour. You can’t tell a difference in either color or flavor!